Historic Anchorage Hotel: A Haven At The Last Frontier

Is it ok to say we cried a little when we left Atlanta after spending five glorious days visiting The Walking Dead filming locations and hanging out with fellow fans on set while they were filming the season 5 premiere? Ok or not, but yes… we cried a little.

This story was originally published in early 2015, now updated with new sceneframes!

We didn’t really visit any of the obvious tourist attractions in Atlanta, since we spent all days driving around, looking for the filming locations of The Walking Dead to get as many sceneframing photos done as possible. We were lucky enough to spend a couple of days on set, too, and meet several cast members and our lovely fellow fans.

The filming days were incredible: we waited outside of Terminus with 10-20 fellow fans every day to get a glimpse of what was happening. And it was so hot! So incredibly hot! And we couldn’t really hide from the sun or drink much (no toilets around), but we still didn’t question it. In the end, we met some fantastic people – fans, crew members, even some of the actors (Norman!!) and loved it all.

The Walking Dead filming locations in Atlanta and Senoia

Even though we skipped the obvious tourist attractions (like the Coca-Cola Museum, we regret this dearly now!), we did see a lot of the city. That usually happens when we visit several filming locations – we drive around, back and forth – so actually, it’s a pretty unique way of getting a sense of a place. 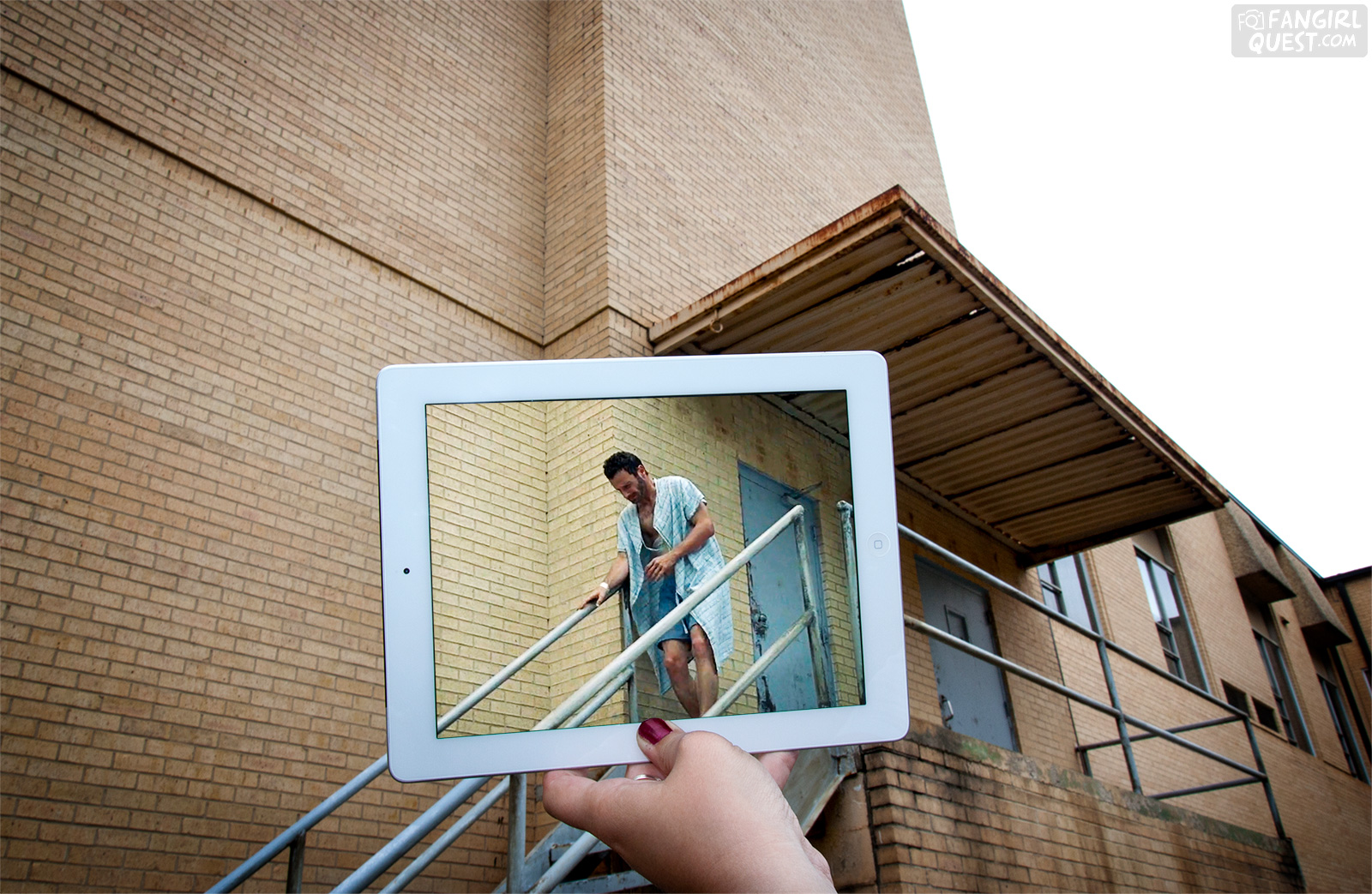 Rick Grimes wakes up to a whole new world in the beginning of season 1.

What was really unexpected was the fact that many of the locations actually do look exactly like they do in the show. Well, except there are no walkers or rotting corpses around. Which is, you know, a really good thing.

You’ll find this view / bridge on Jackson St running over Freedom Parkway Avenue. If you get lucky, you can even park nearby and just admire the Walking Dead view! 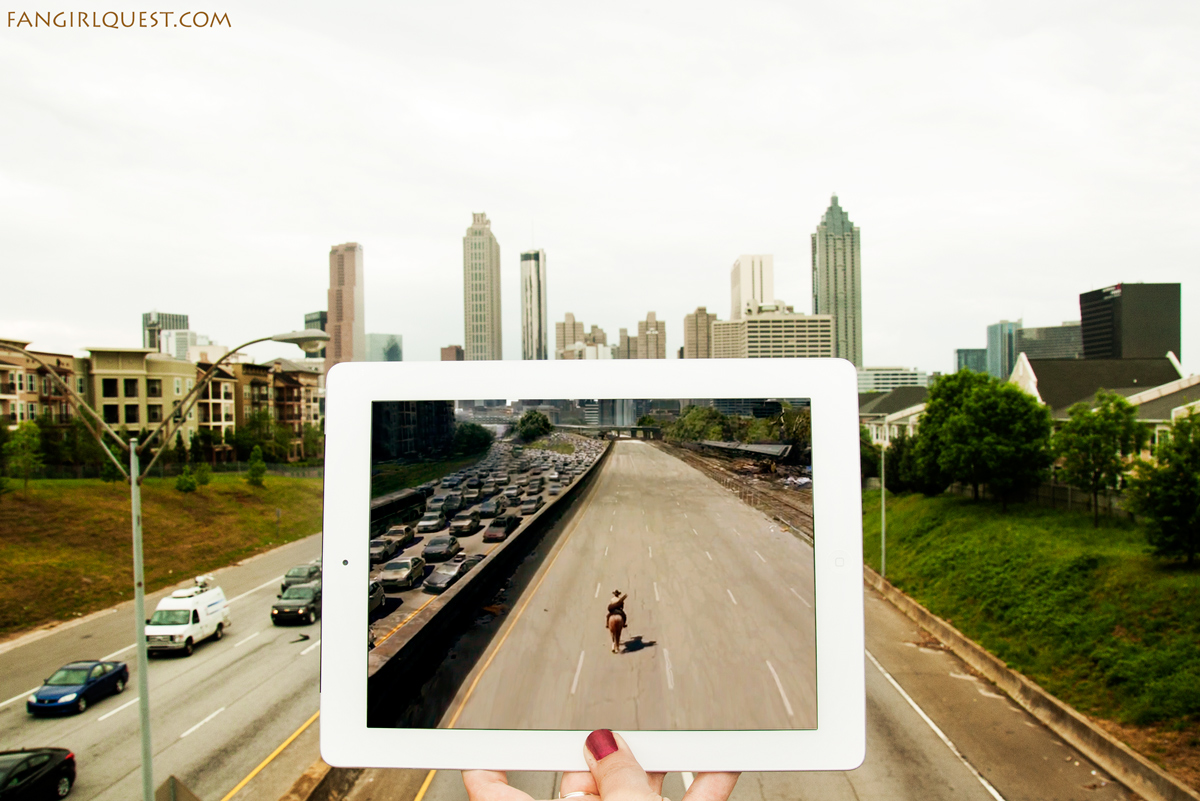 Rick arrives to Atlanta. The scene wasn’t actually shot on the highway, but the skyline can be viewed on Jackson Street Bridge.

This scene took place at 259-279 Nelson St SW, and the following scenes just a few blocks away downtown. Even though there was a little bit of traffic on the day we went to look for all of it, it was still kind of creepy… kept waiting for walkers to appear around every corner! 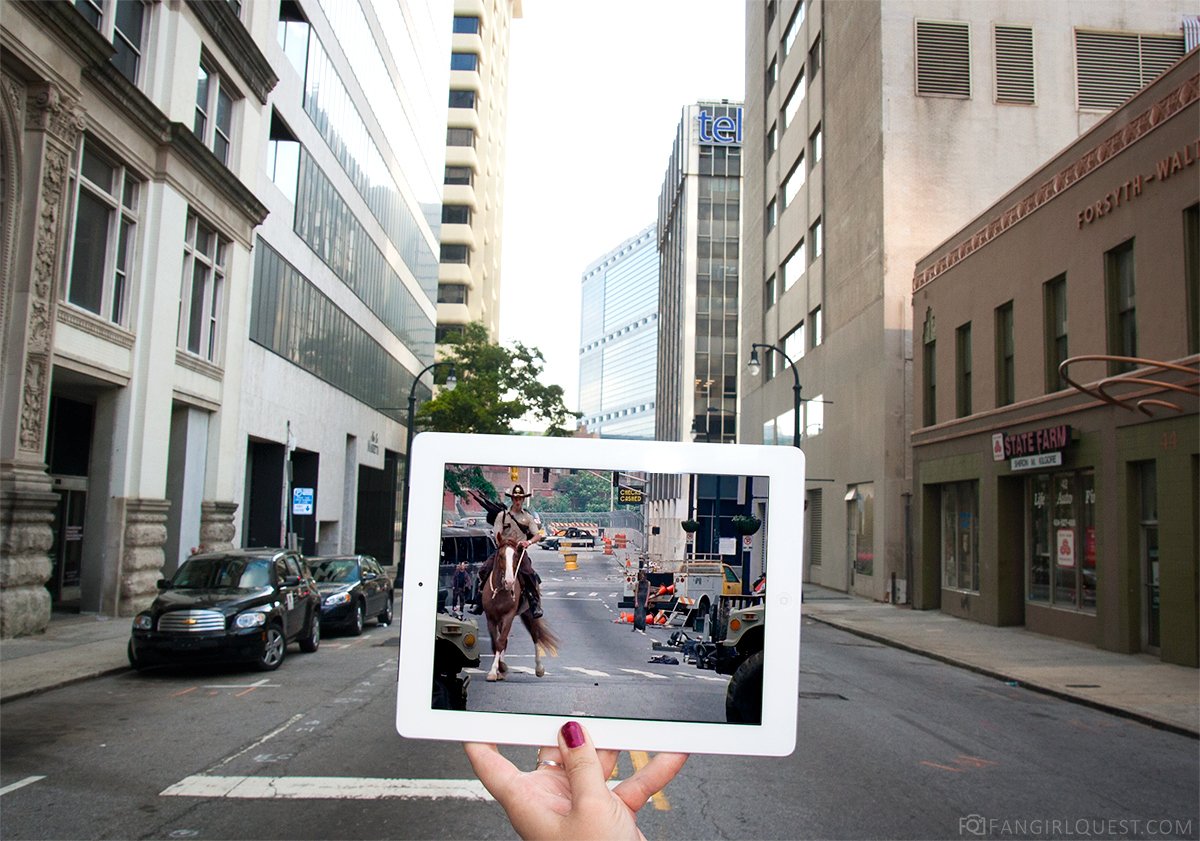 Rick runs into some walkers in downtown Atlanta.

This is around 51-57 Walton St NW. It must’ve been pretty exciting to film in the middle of the city. They must’ve closed down the streets when this happened. Aw man. Wish we could’ve been there… 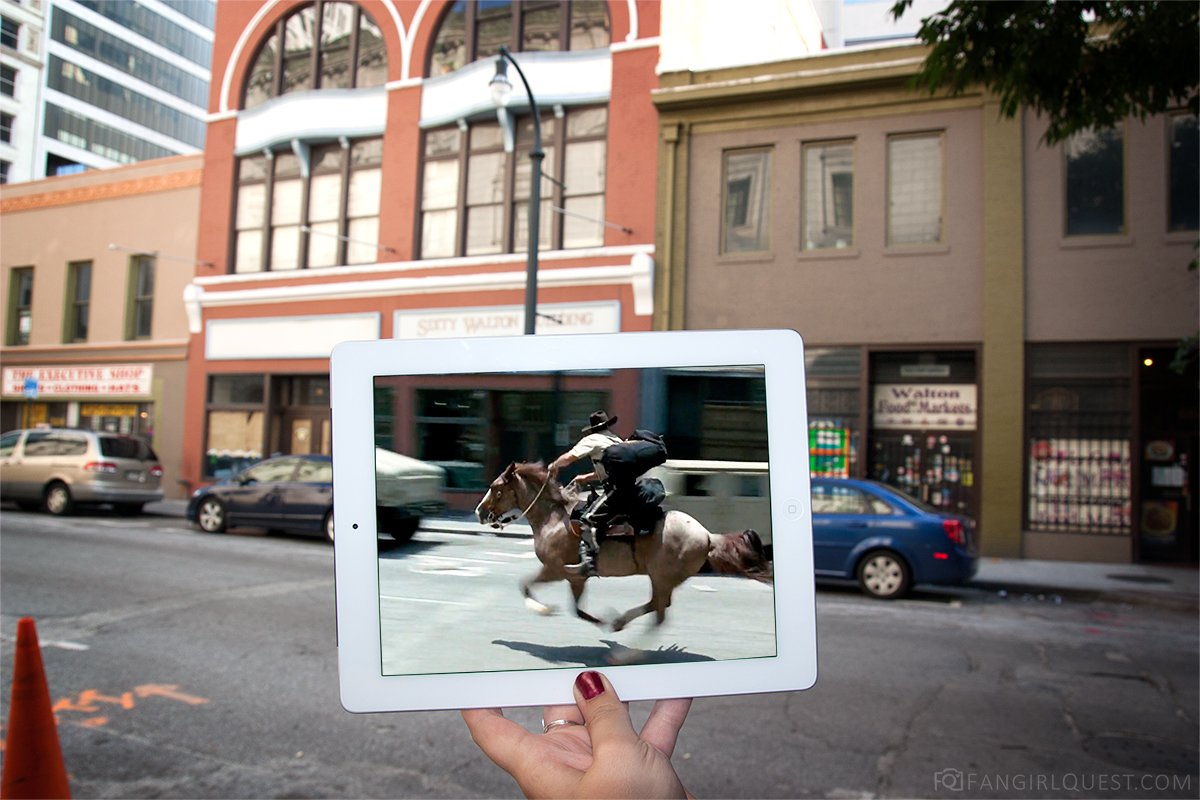 Time to go! Rick and his horse get chased down by a horde of walkers.

Also downtown. This dumb chain link fencing kept us from entering the alleyway! But we said “pfft” and took a few photos anyway… haha. Such rebels. 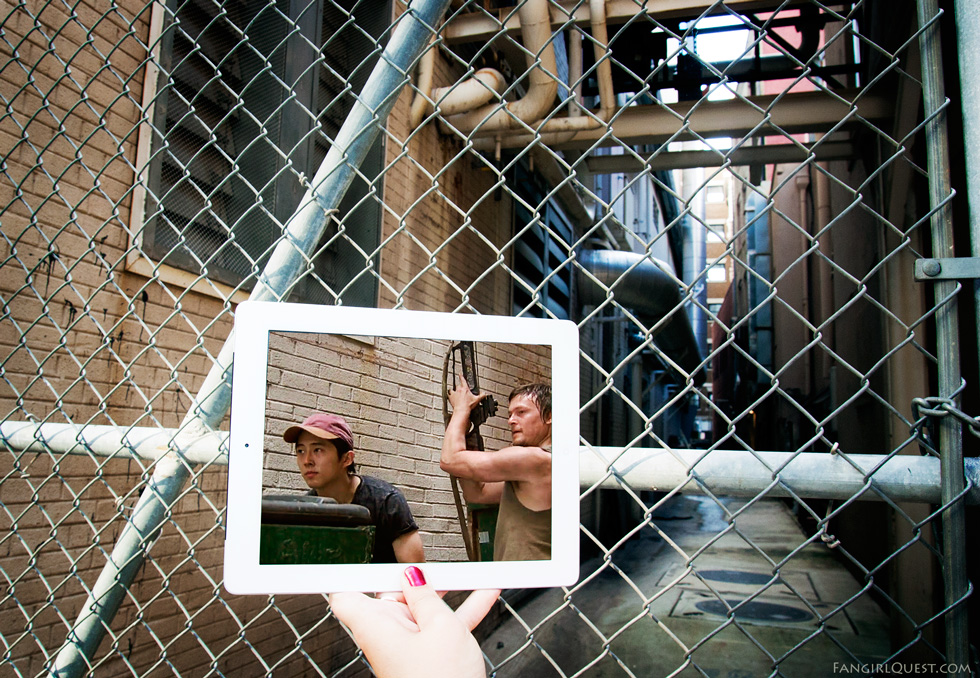 Rick and Glenn in the alley. We were blocked by a gate! How rude.

Same alley, hat shot for giggles. It is an important hat, after all. Tiia actually spent weeks looking for one, but all the really nice ones were expensive and the cheap ones just didn’t look right. These days, you can get pretty good cosplay ones online though! 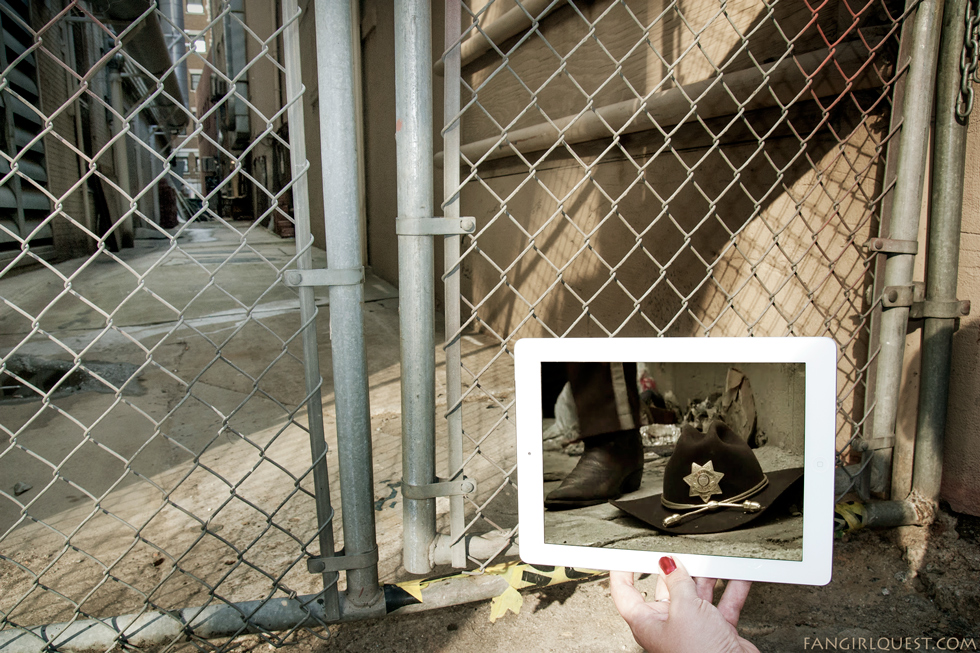 If you look up “The Goat Farm” in Atlanta, you’ll find this place. We went for a short walk within the incredible buildings, but only learned afterwards that the place is actually way more interesting than we originally thought… and we loved it even before we knew!

The Goat Farm Arts Center is a hybrid project that assembles art, performance, science, design, and technology entities in developments that simultaneously operate as centers for contemporary art and performance. The center is housed in a 19th-century complex of industrial buildings and contains the studio space for over 450 artists, performers, designers, researchers, creative entities and small tech start-ups. Read more on Wikipedia. 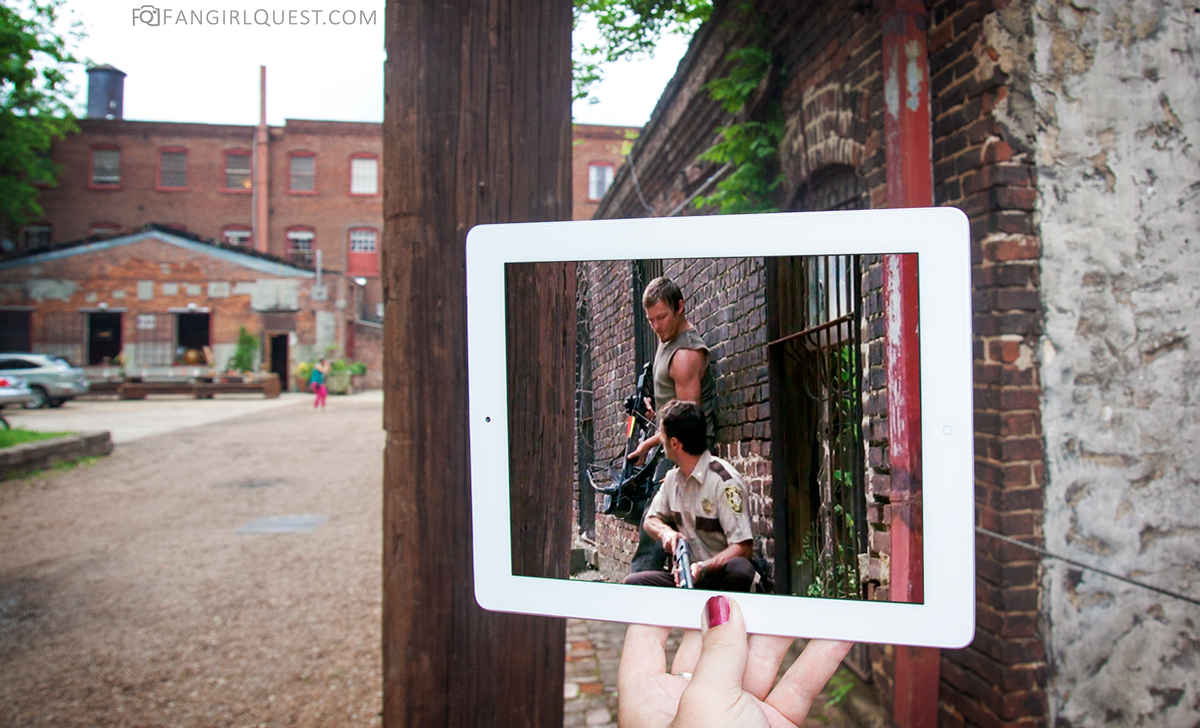 Rick and Daryl getting Glenn back, filmed at the Goat Farm, Atlanta.

Same place, different angle. We’re hoping to go back to Atlanta some day, so maybe we’ll get to visit this super awesome The Walking Dead filming location again! Maybe even see a performance or an exhibition now that we’re in the know. 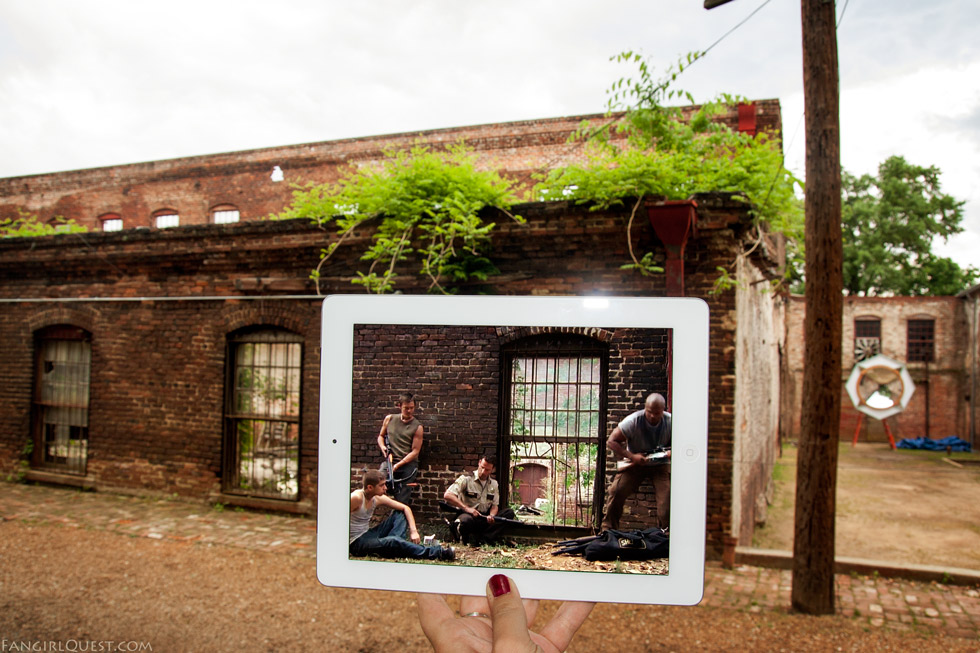 The Goat Farm, one of the nicer Walking Dead filming locations to visit!

“Arrow on the Doorpost” | Andrea and Hershell wait for Rick at the meet-up with the Governor, 3×13

This one’s a bit of a drive away and there isn’t much to see. But since we had a car and some time to kill, we decided to check it out and were pretty happy to get to sceneframe both Andrea & Hershell at the same location. This building is at 38 Main St, Newnan, but if you’re looking for the Walking Dead filming locations where there’s actually something to see, we recommend the other ones. Because this is just a building in the middle of a quiet residential area.

Still, we guess… it’s a TWD location. So, that makes it a very special building! 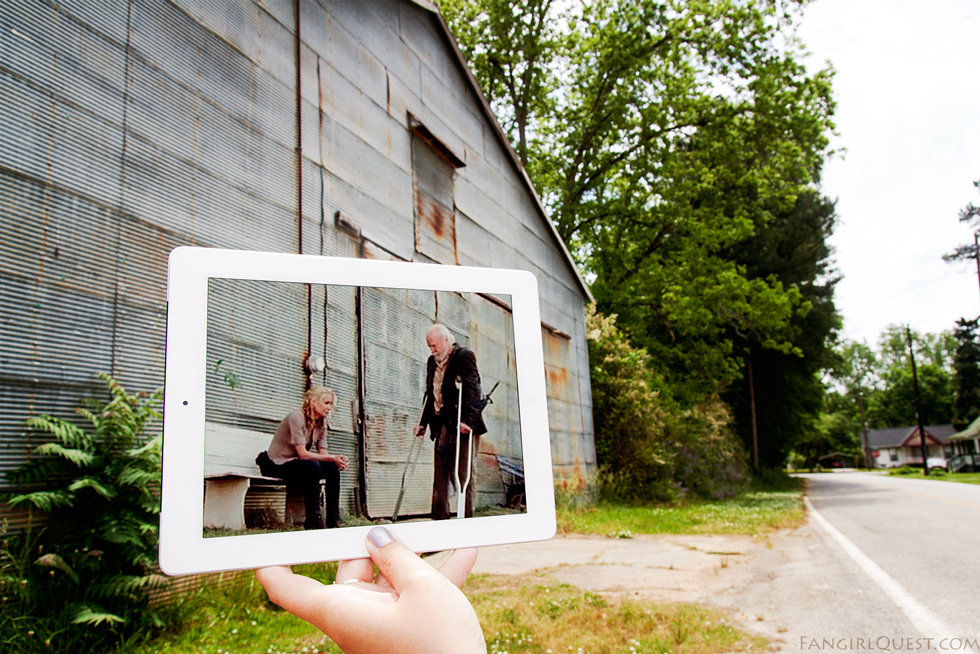 Andrea and Hershell waiting for Rick and the Governor.

Senoia! A lovely little town full of The Walking Dead filming locations and even a little souvenir shop. This one’s just outside the main street of Senoia: the address 262-298 Andrews Pkwy might take you closest to it. Just compare the scene to the buildings and trees around and you’ll quickly find it!

And another one from the Jackson St bridge. This one we had signed by some of the cast members, and even Mr. Robert Kirkman himself. We handed our prints over to him and he just casually went “yeah I’ve seen these online”.

What a moment. WHAT. A. MOMENT. We had a serious fangirl meltdown as soon as he walked off and it was safe to sort of freak out a little. 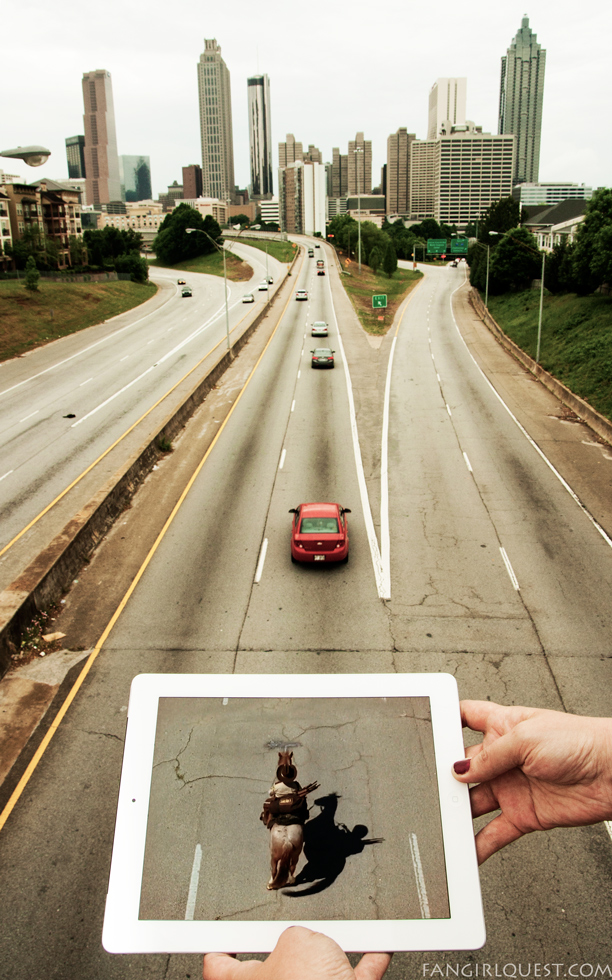 Another angle of the riding to Atlanta shot.

The first episode of season 8 airs tonight, and all excited, we dug out our ol’ Walking Dead archives from our trip to Atlanta and found a few more sceneframes we haven’t published before. So happy to get the show back, even if a few of the characters below are missing now…

The Walking Dead Filming Locations in (even more!) photos: 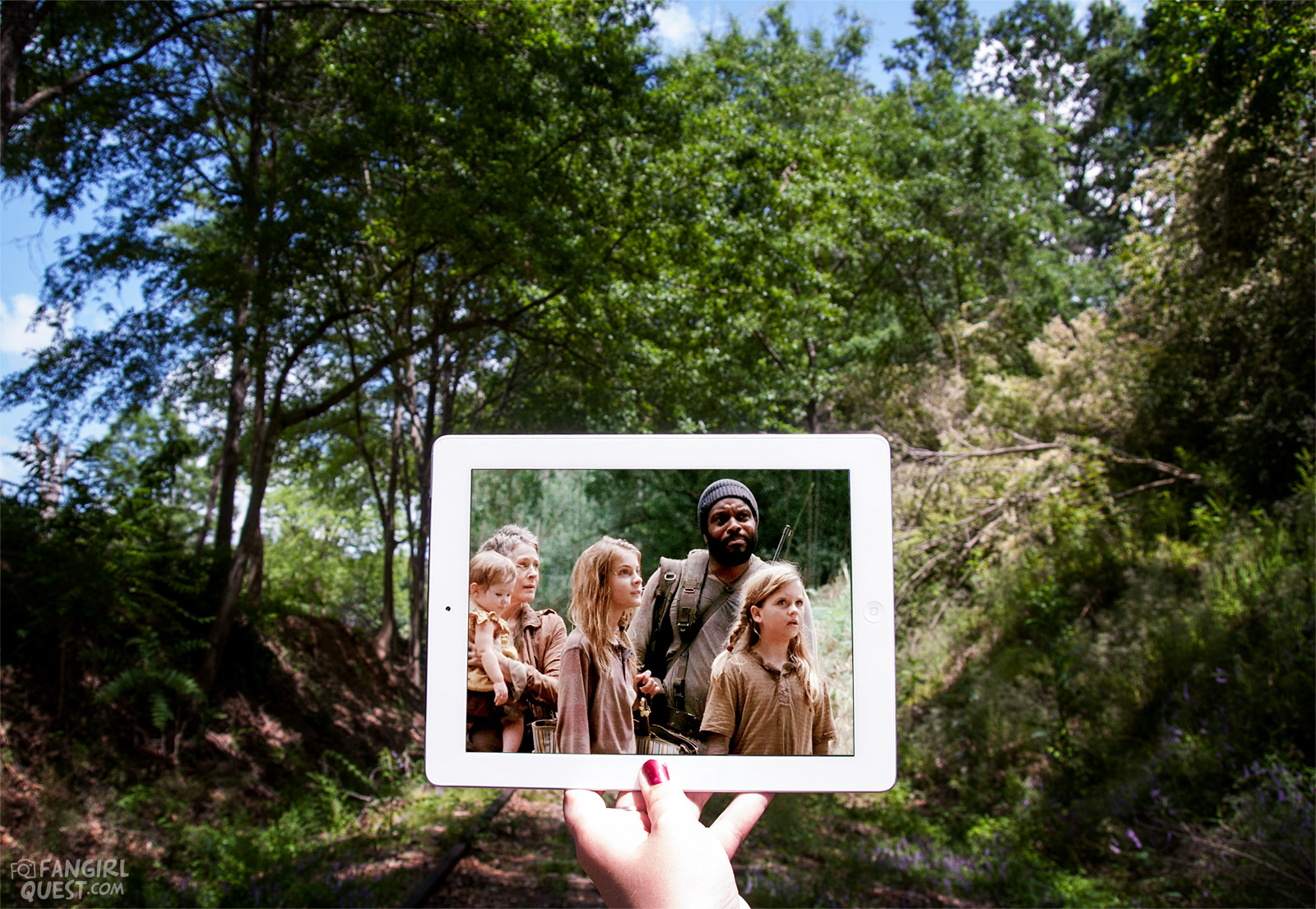 Carol’s group… just moments before they went to look at some flowers. 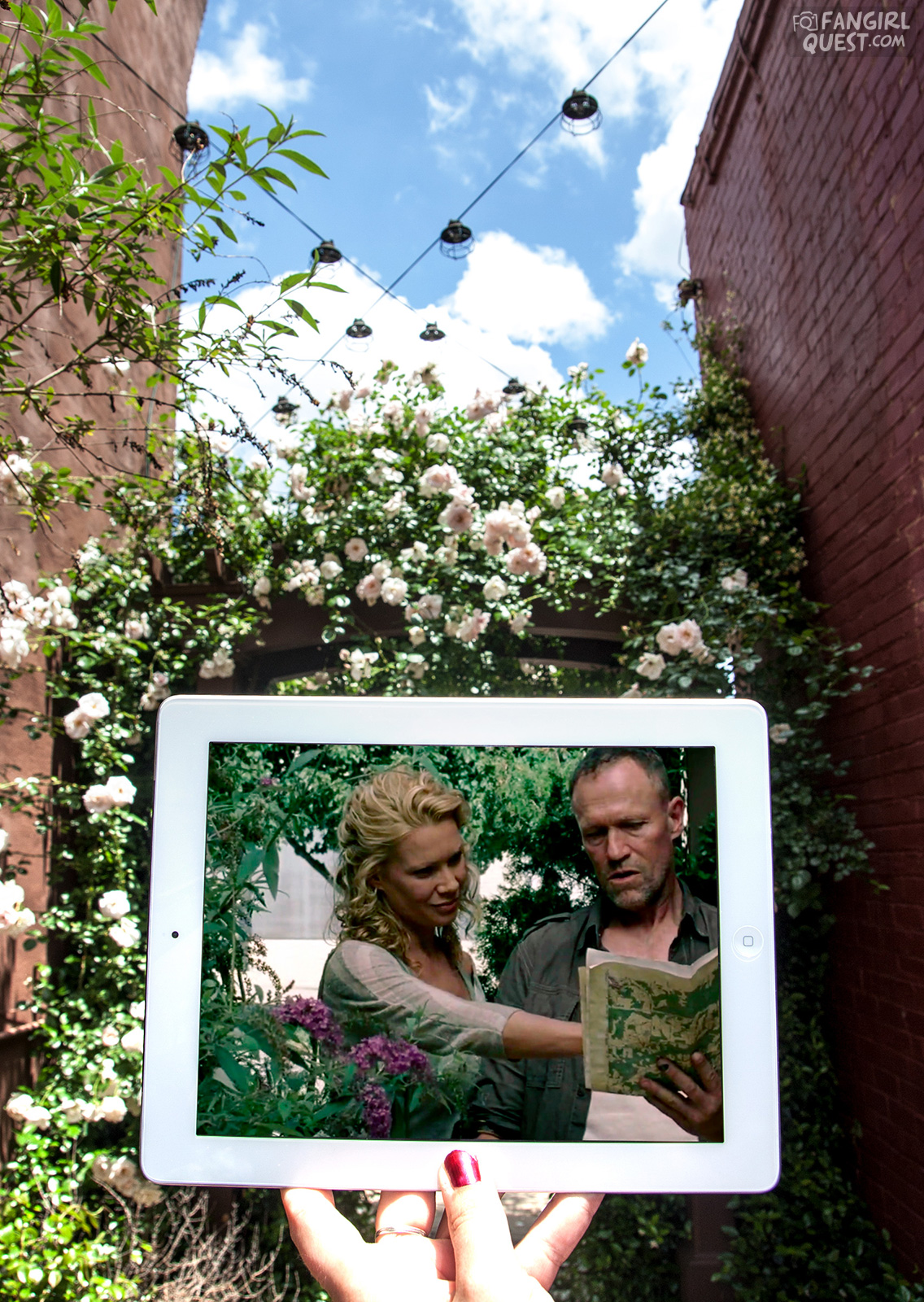 Andrea and Merle in a hidden alley in Senoia, GA. 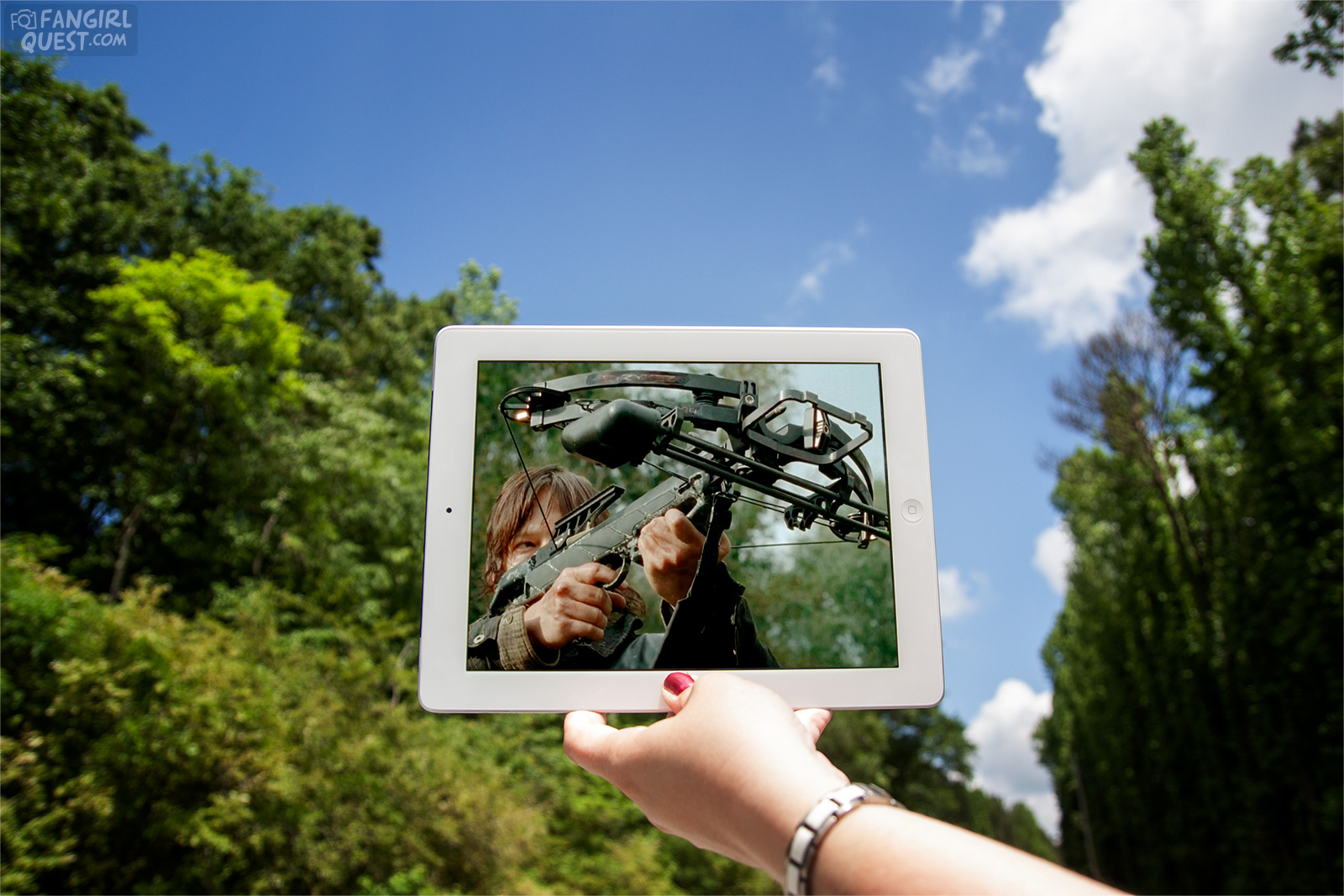 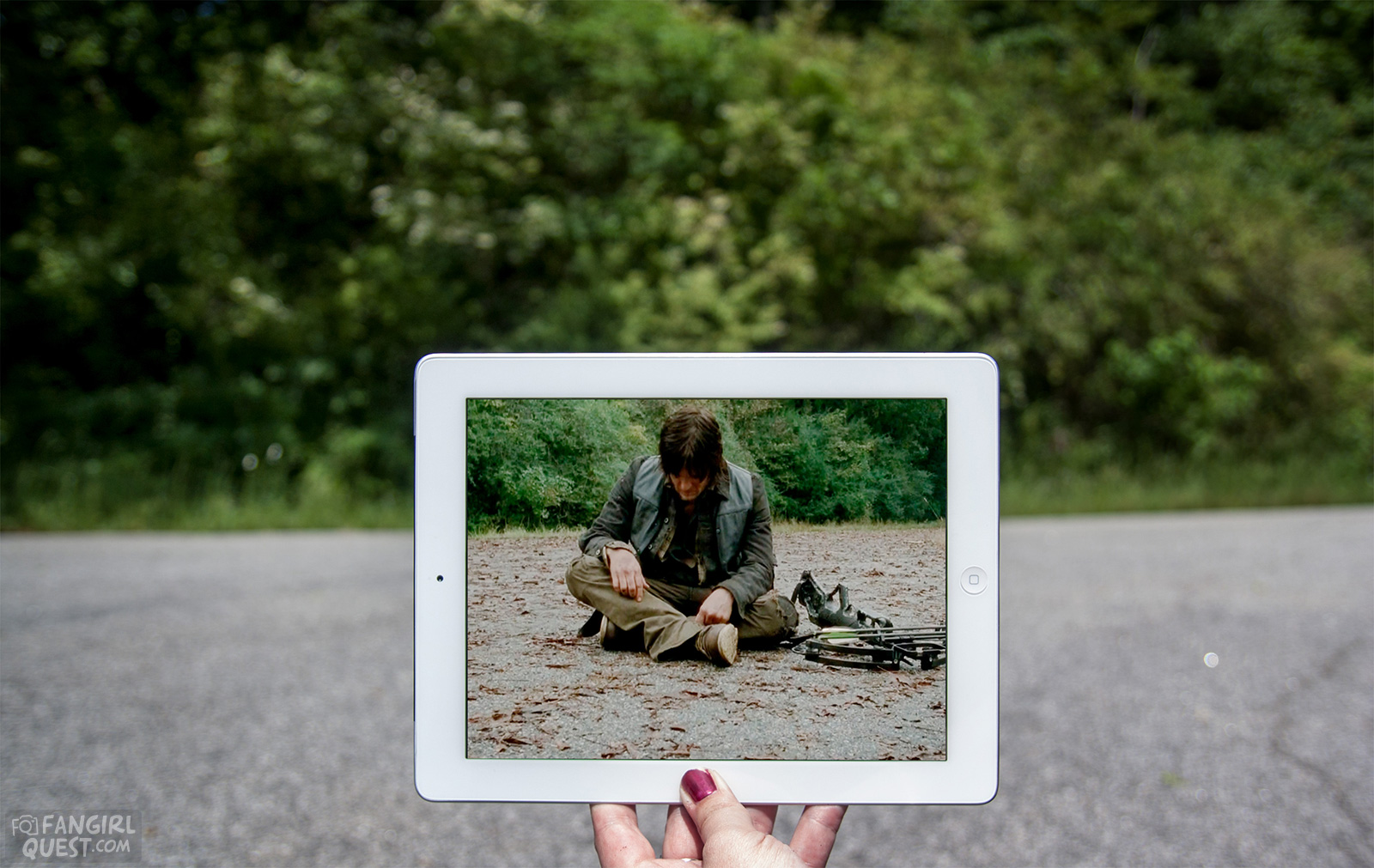 One of the more pointless sceneframes because hello, the background could be anywhere. However, we DID go there so this is totally legit :) 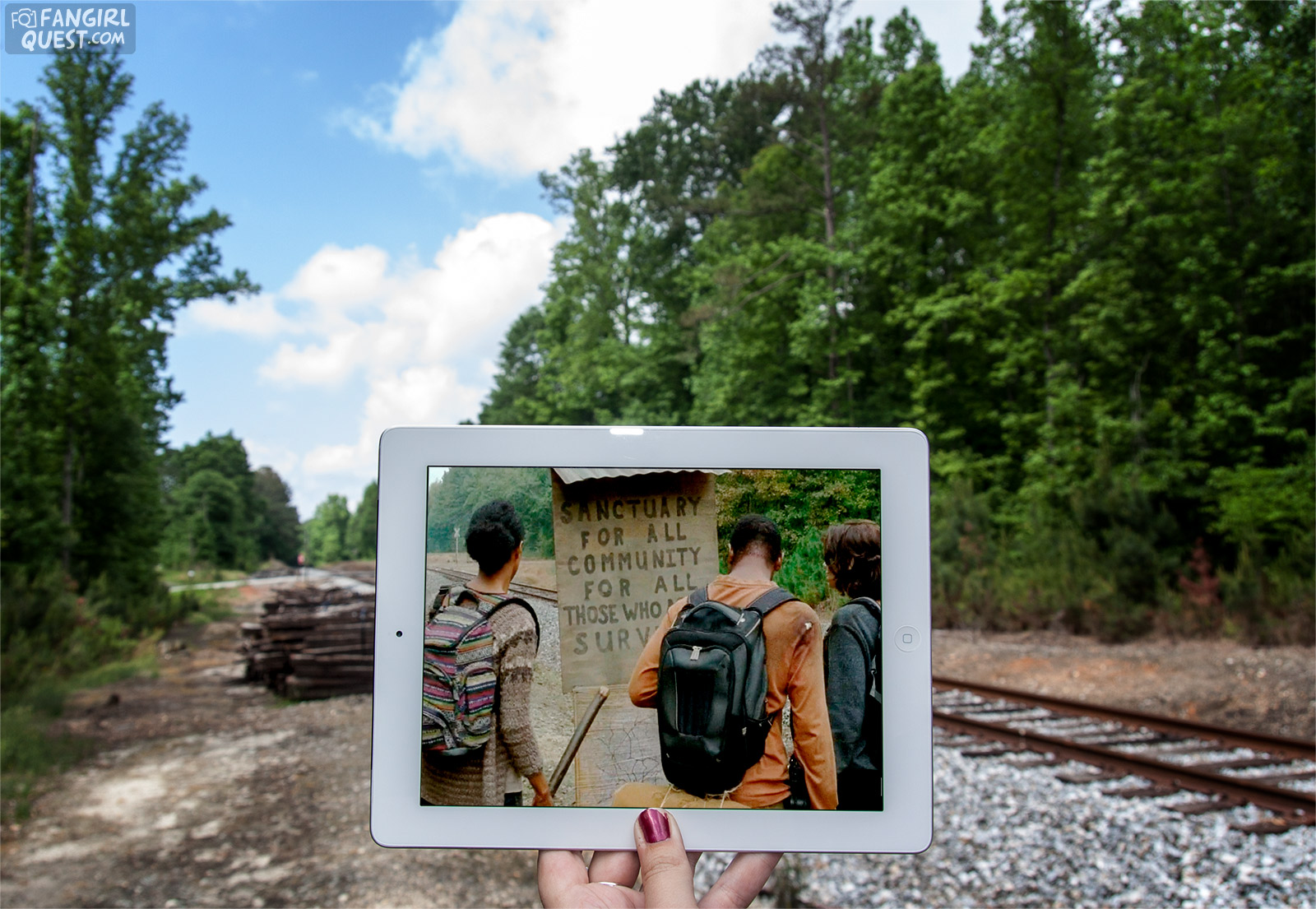 Would you follow the signs to Terminus? Cause knowing what we know now… we wouldn’t.