Devil’s Bridge: A Filming Location With A Devilish Story To Tell

During our amazing, epic, mind-blowingly fun roadtrip down the coast of Wales we stopped at this old bridge to sceneframe a show called Hinterland and to learn a little about the Devil’s ways…

Devil’s Bridge is an unusual, impressive bridge that spans over the River Mynach in the village of Ceredigion in Wales. What makes it unusual is that it’s actually not just one bridge – it’s three of them on top of each other. The oldest one is estimated to have been built sometime between 1075-1200, the next one on top of it in 1753 and the latest, an iron bridge in 1901.

From the road, the bridge doesn’t seem like much. But once you park the car and look down, you’ll realize why it’s become famous and why the filming crew considered it special enough to be used as a recurring location on the “who dunnit” show. 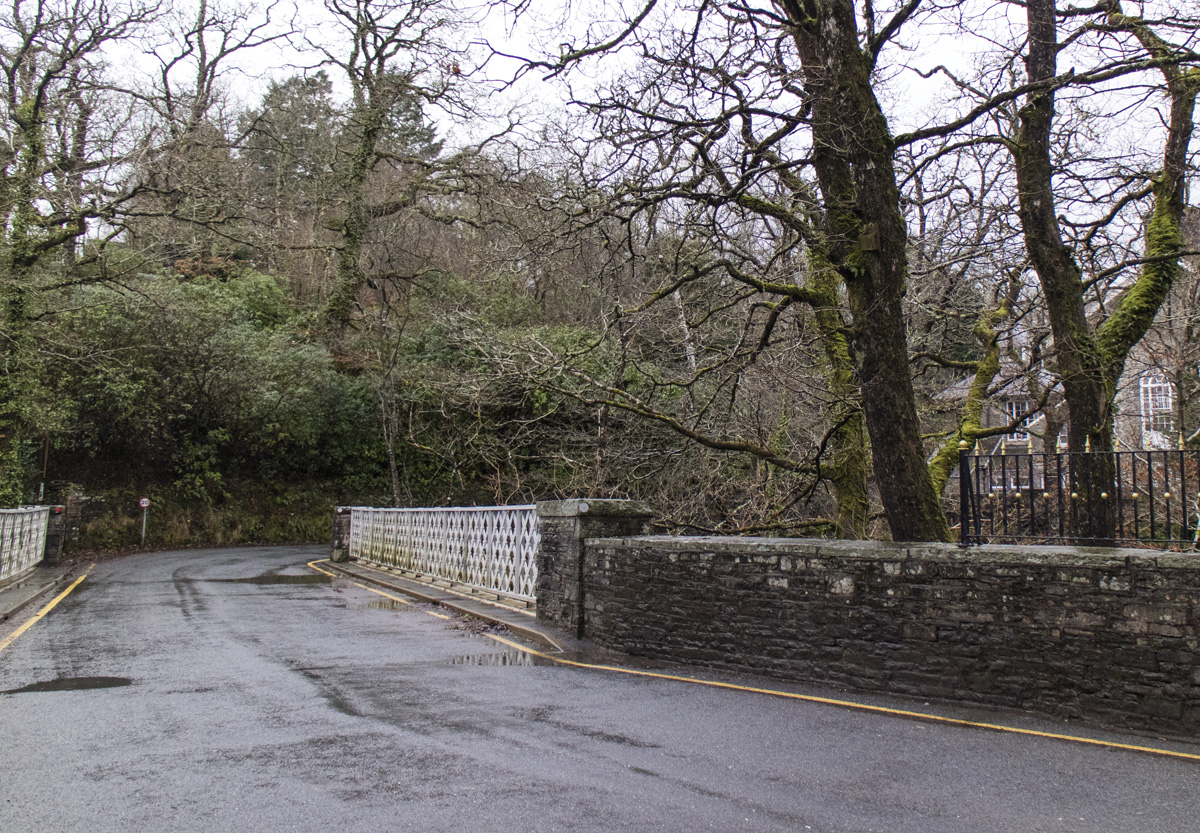 Devil’s Bridge, filming location to Hinterland and quite a legendary attraction.

It was a rainy day, so we weren’t really expecting to take any fancy photos, but we still really wanted to see this place. Why? Because the legend that goes with the oldest part of the bridge is a super fun one. 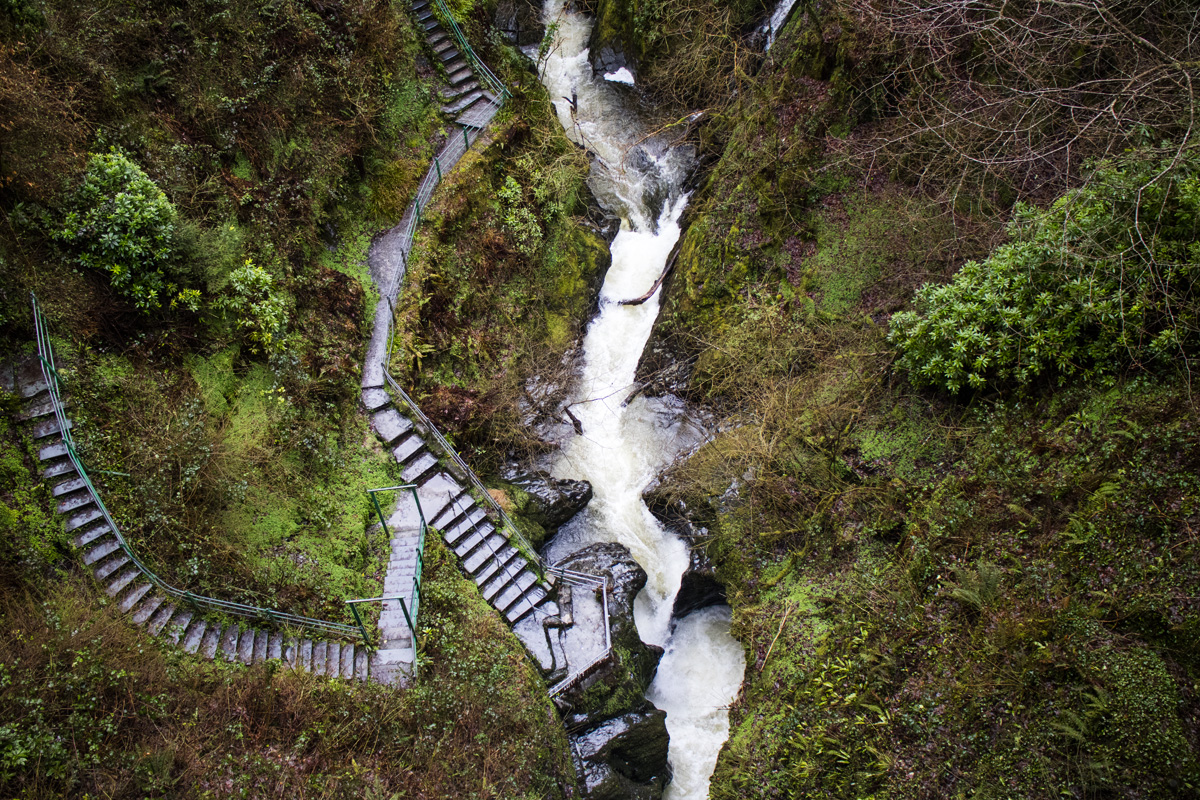 Those are some steep stairs!

The legend of Devil’s Bridge

According to the legend, the Devil himself came over to Wales as he’d heard the scenery was breathtaking. He came across an old woman’s whose cow had wandered across the river. The woman was very sad, as she couldn’t get her cow to come back home.

The Devil saw an opportunity and took it. He said to the woman:

What you need my dear, is a bridge, and I am just the man to build you one. Why don’t you go home, and in the morning there will be a bridge waiting for you. All I ask in return is to keep the first living thing to cross the bridge!

The woman considered this a bargain and agreed, but wondered why an earth did the creature think she’d offer herself to him in exchange for her cow. So the next morning, she took her faithful dog and they walked to the river. Lo and behold! A beautiful bridge had indeed appeared.

“Now it’s your turn to keep your side of the bargain”, said the Devil. But the woman was clever: she took a loaf of bread out of her pocket and threw it over the bridge. Before the Devil could stop it, the dog had ran across the bridge trying to fetch the bread.

“You stupid old woman”, screamed the Devil. “Your smelly, hairy dog has become the first living thing to cross my bridge. It’s no good to me!” and he disappeared and was never to be seen in Wales again.

Getting soaked for Hinterland

After parking our car we looked at the sky and decided it didn’t look rainy enough for us to bother with raincoats or umbrellas. Boy, were we wrong… 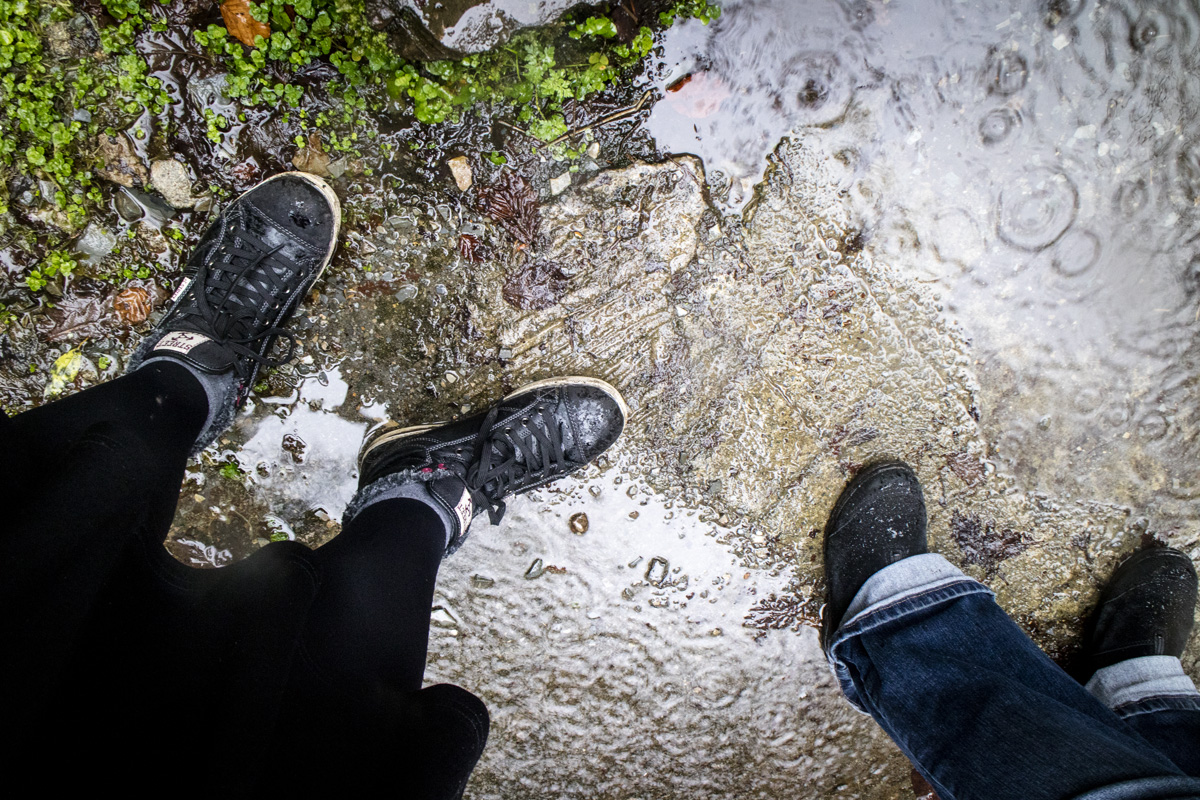 We really, REALLY need to invest in waterproof hiking gear…

By the time we’d reached the bottom, it was raining so heavily that it was actually hard to look up at the bridge, let alone take any photos. But we’d gone that far already and weren’t about to give up!

The show Hinterland begins with a scene where a body is found nearby the Devil’s Bridge, and we decided to sceneframe the main dude doing his thing (AKA investigating the murder). A little birdie told us that in a recent episode of season 3, another body was pushed over the edge.

It’s becoming quite a place to dispose of murder victims! This despite Powys having the largest area of any police force in the UK and lowest murder rate of any part of the UK! Still, they keep happening on TV… 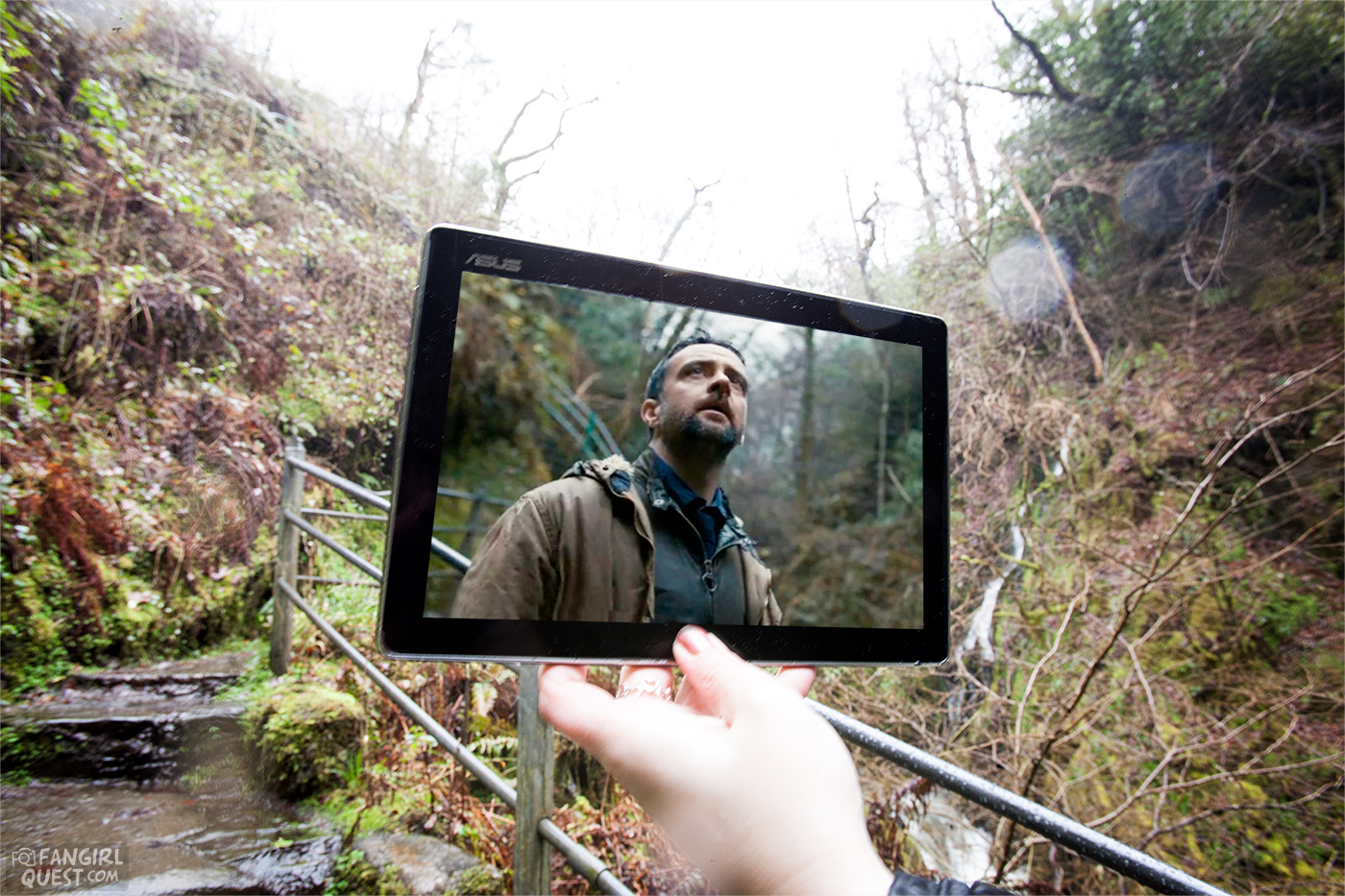 For these shots, we ended up using our old tablet as we wanted to protect our fancy ZenPad 3S 10 from the rain… but then, the black edges actually work quite well in the photos! 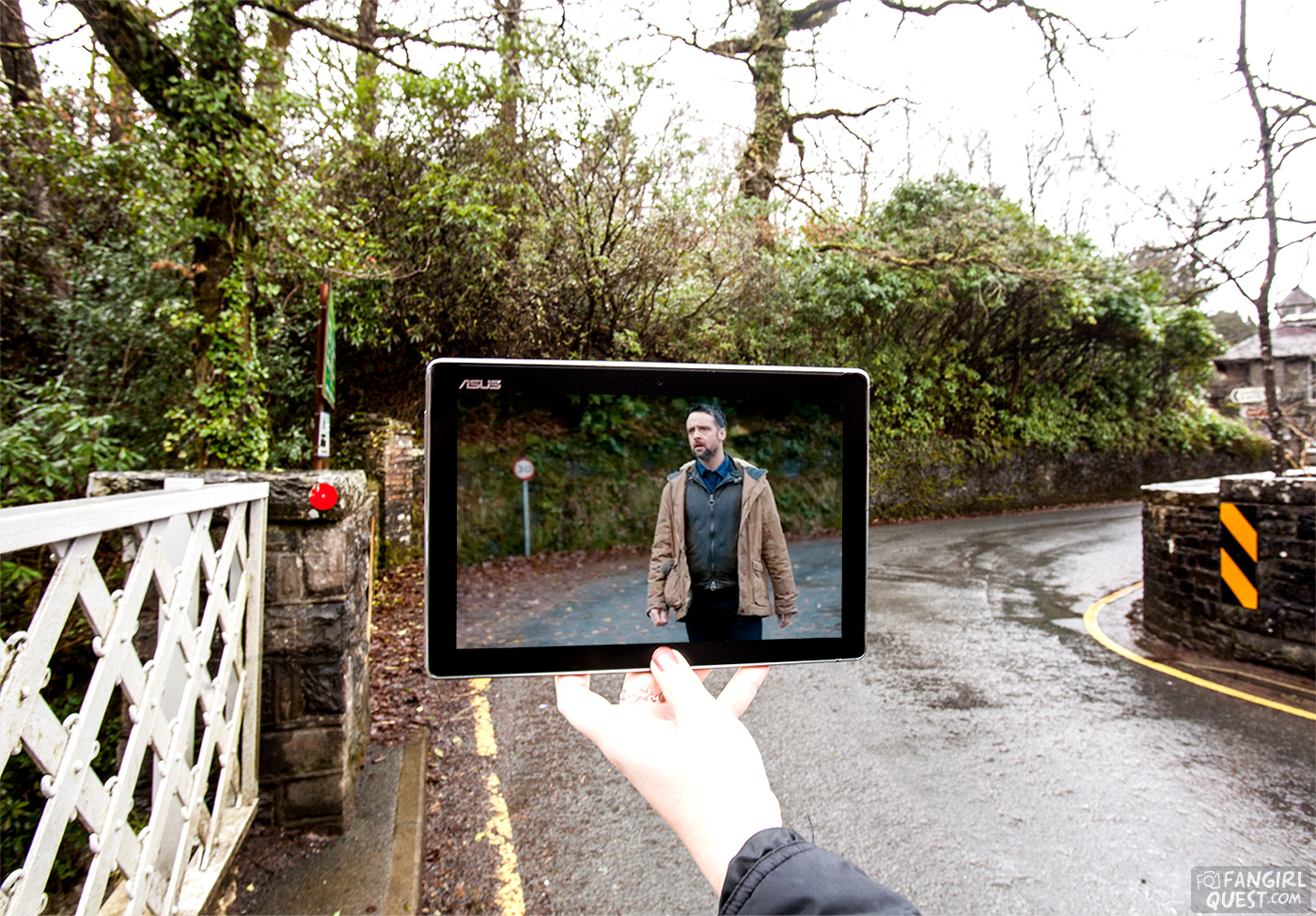 Even though our clothes and shoes and hair and face were all getting soaked in the rain, we agreed that it actually made our visit a more exciting one: we were completely alone and the pattering rain shut out all other noises – apart from the running, sloshing water in the river. So eerie! It was just us, the Devil’s Bridge and all this water around us. 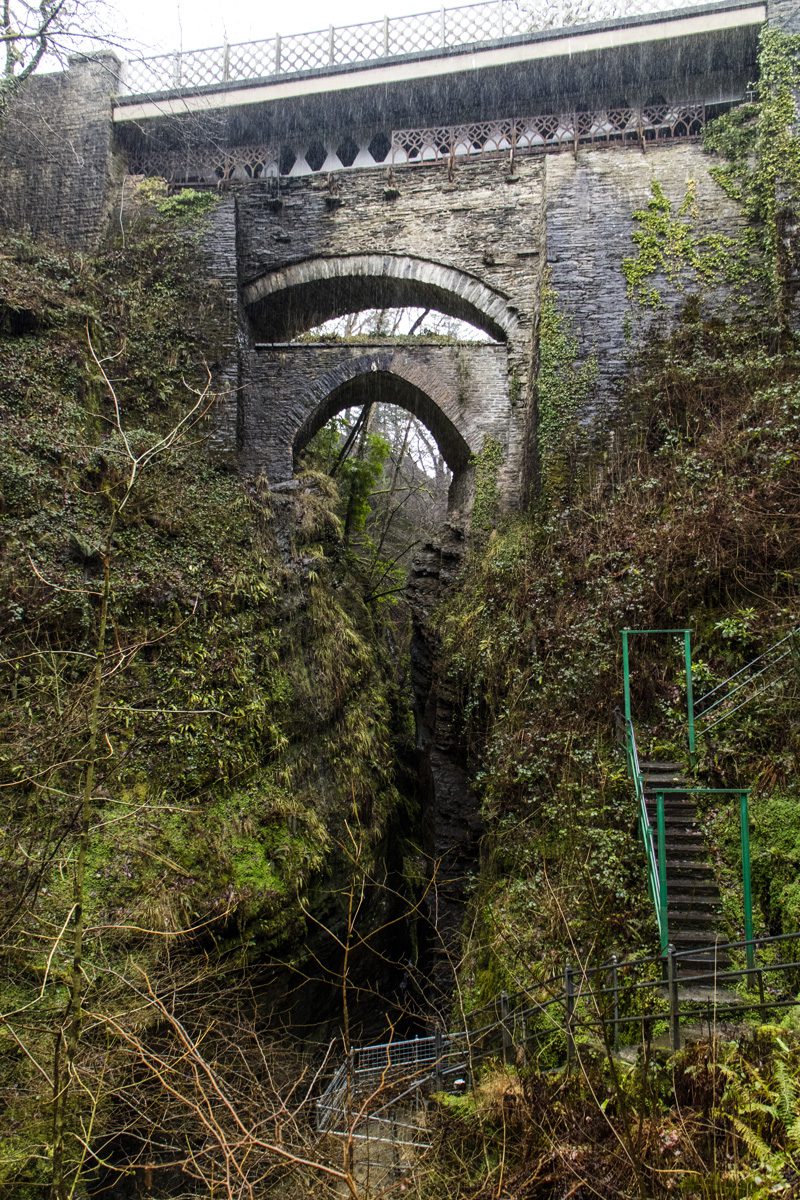 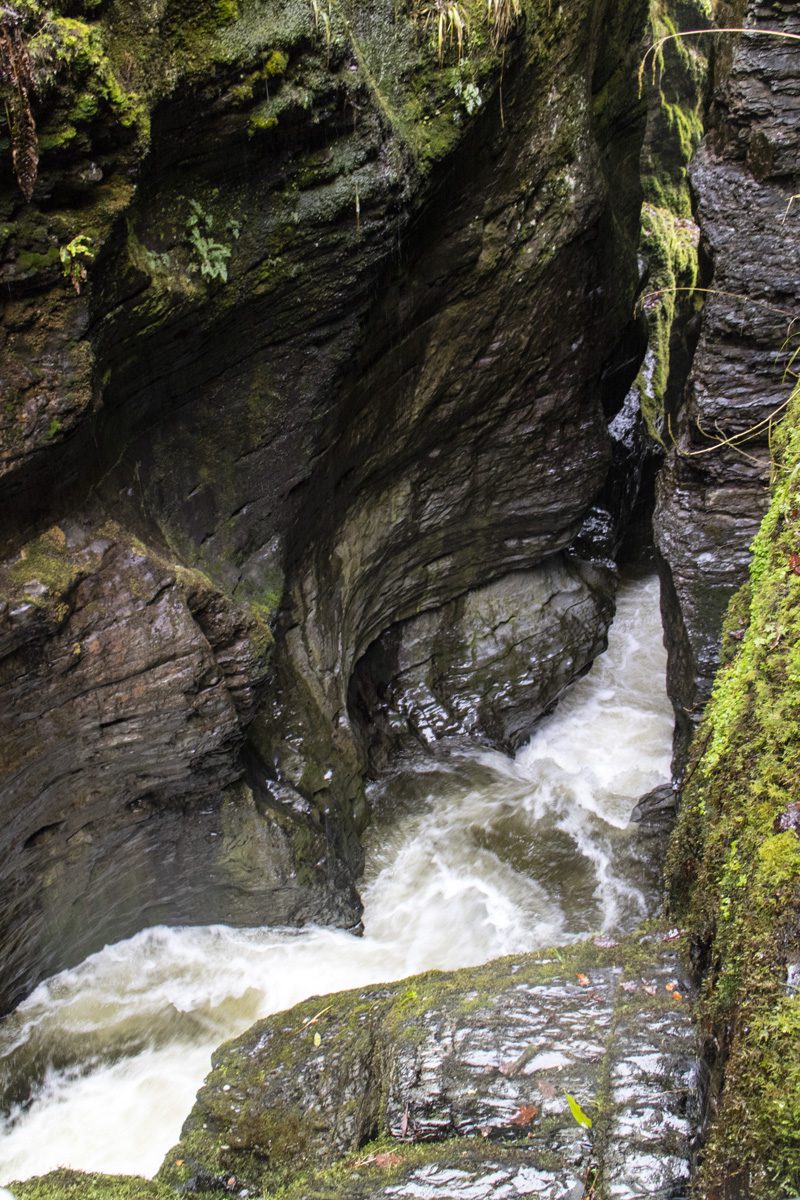 Since the bridge and the river were so cool, we even tried to snap a few selfies in the rain… but you know, it’s really hard when the rain is hitting your eyes and your phone and camera are getting soaked along with yourself. But this shot I took of Satu above her, standing in the stairs, is a hilarious one. So there’s that. 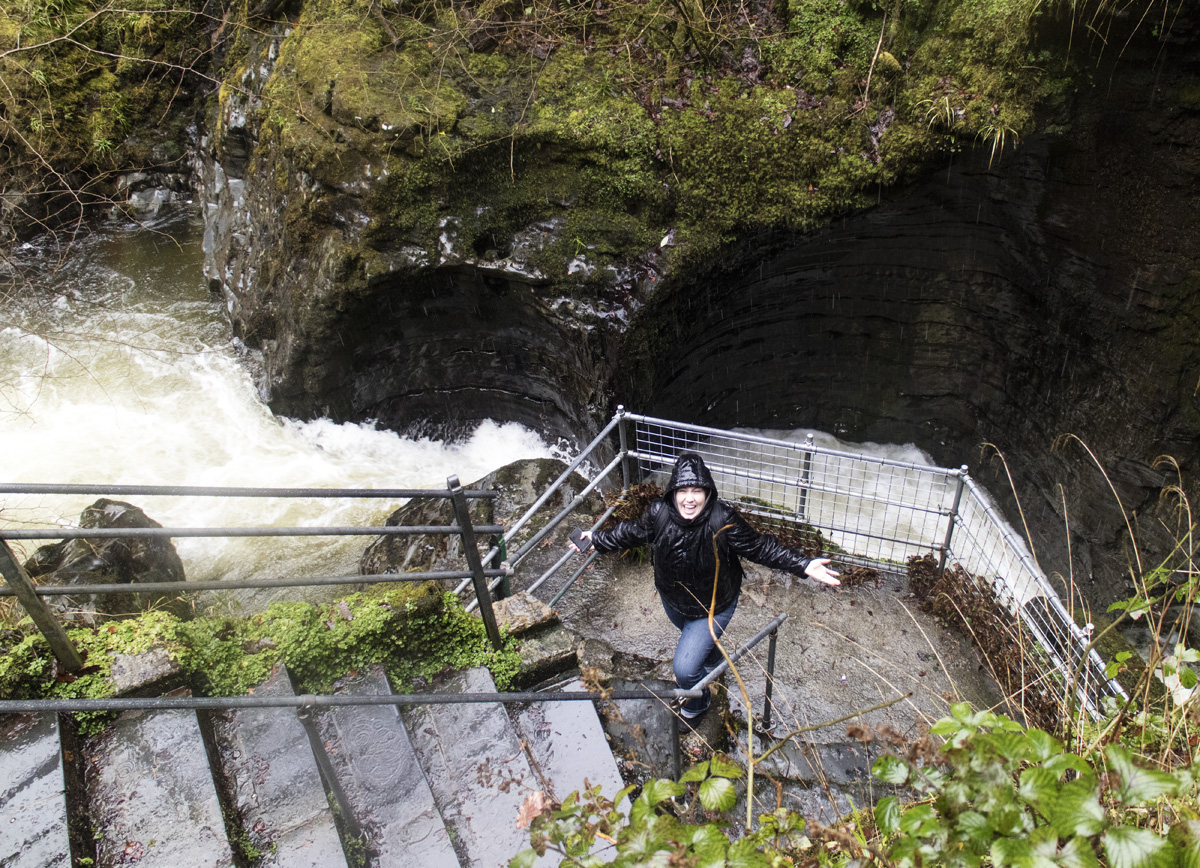 All in all, it was a pretty memorable stop. We didn’t even mind the wet clothes that much.

A bunch of links:

Collaboration post: Some parts of our roadtrip to Wales were done in collaboration with the tourism authorities and local hotels. All opinions, experiences and views, however, are 100% our own. One simply can not buy our love ❤