LA maybe known for it’s movie stars and TV studios, but about a thousand miles up the West Coast is another city that boasts an impressive list of both TV and movie productions. Vancouver is home to many shows such as The X-Files, Supernatural, Arrow, The 100, Fear The Walking Dead, Smallville, Battlestar Galactica and The Flash. The list goes on. Named “Hollywood North”, the city has also hosted some big name movies from the X-Men franchise to the recent megahit Deadpool.

Vancouver is a sprawling metropolis, with several worthwhile filming locations and tourist attractions outside the city as well. The downtown area is manageable on foot and there is a public transportation system, but we recommend hiring a car to fully explore everything the city and its surroundings have to offer. We stayed for 6 days and in that time drove more than 800 kilometers – that’s about 500 miles – and still feel we managed to barely scratch the surface.

Robson Square is a public plaza at the heart of the city, home of the Vancouver Art Gallery and the only public outdoor skating rink in Vancouver. The plaza is also a popular filming location, having played the part of several cities, from Washington D.C. in The X-Files to Central City in The Flash. By the time we made it here we were almost out of daylight and the iPad was running seriously low on battery, but we managed to snatch a couple of sceneframes from our favorite shows! 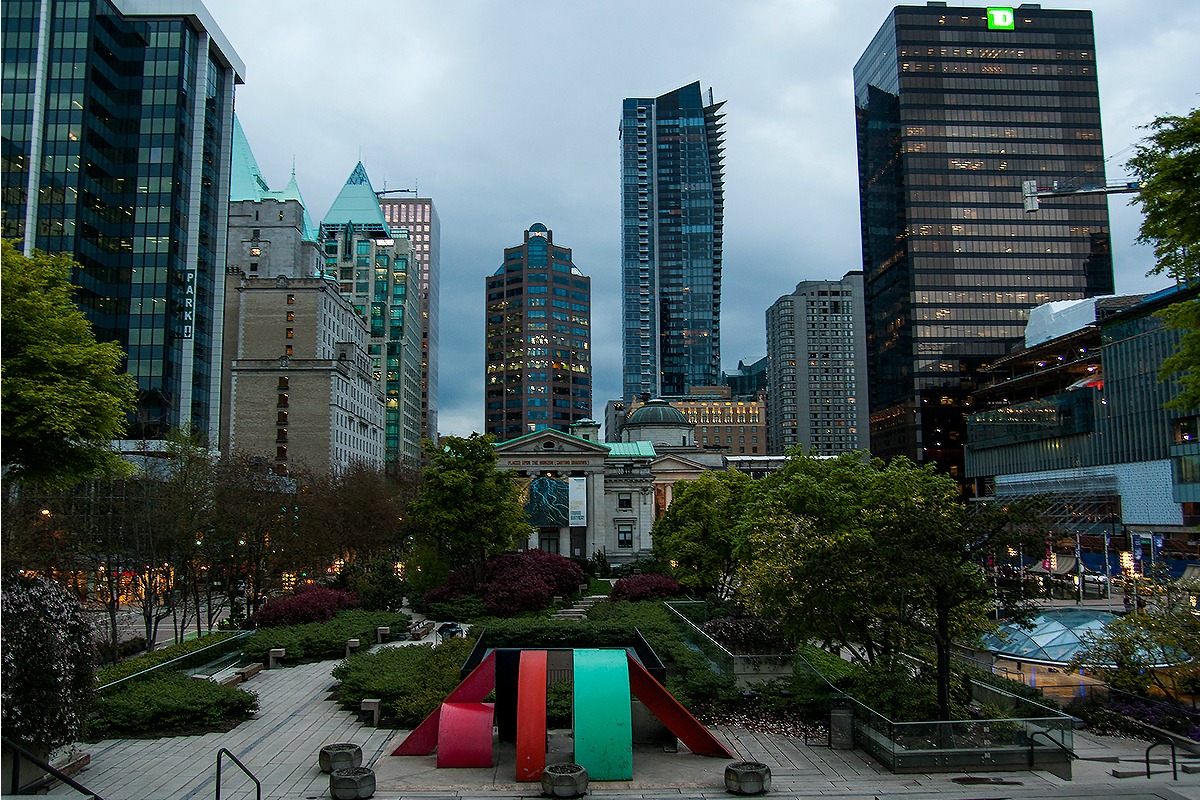 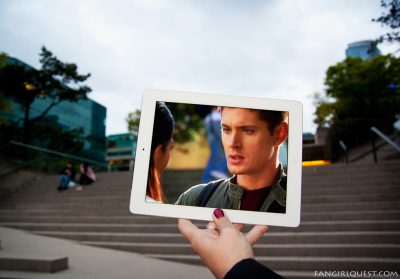 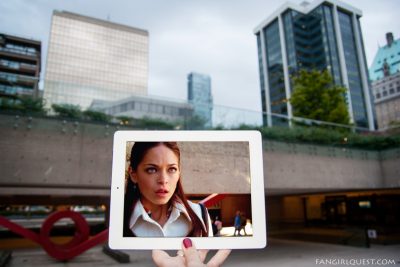 Gastown was Vancouver’s first downtown core in the 19th century and is now a national historic site. Vancouver’s old town is one of the most charming areas of the city, where you can enjoy a nice stroll along the cobblestone streets, shop in the unique boutiques and take in the nightlife and enjoy live music. Arts and culture also make up a significant part of the charm of Gastown, with several galleries and exhibits in the area. On Arrow the district was featured as the not-so-pleasant part of Starling city, The Glades. In season one, shots outside Laurel Lance’s CNRI office were filmed in Gastown. 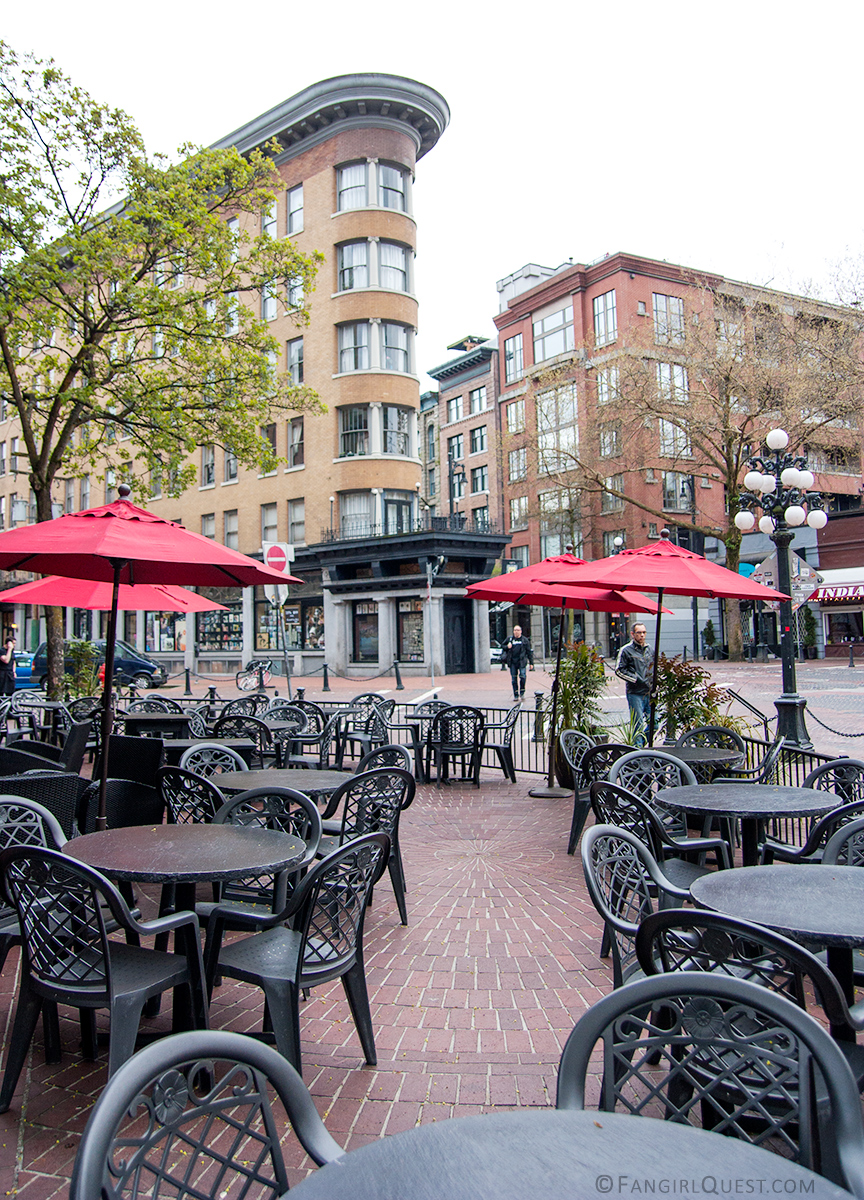 Make sure to also schedule a visit to Granville Island. Once an industrial manufacturing area, the peninsula is nowadays a popular tourist spot with arts and crafts markets, performing arts and trendy restaurants. We only managed a quick drive through but wished we’d had more time to properly explore this quaint little area.

Thanks to our busy sceneframing schedule we had little time in the way of traditional touristing, but we did manage to catch some great bits and pieces. Our favorite by far: the virtual flight ride FlyOver Canada that takes you on a simulated hang glider journey over the country. I’m not a huge fan of simulators since I get motion sickness pretty easily, but this one is so smooth and gentle that even I didn’t have any problems just enjoying the experience. The visuals are stunning and they are enhanced by special affects like wind and scents to create the illusion of flying. Definitely worth the time and money.

The Vancouver Aquarium is not among the grandest or fanciest in the world, but it is a charming attraction and a great experience especially for families with smaller children. There is also a nice emphasis on local marine life. We were drawn there because it is a filming location for The X-Files, but frankly also because I’m a complete geek when it comes to sea creatures. Dolphins and belugas? I’m sold! The aquarium is located just north of Downtown Vancouver in Stanley Park, which is in itself worth a visit. The lush park, sometimes dubbed “the Central Park of Vancouver”, offers outdoor activities, 27 kilometers of forest trails and even a train that takes you through the park! 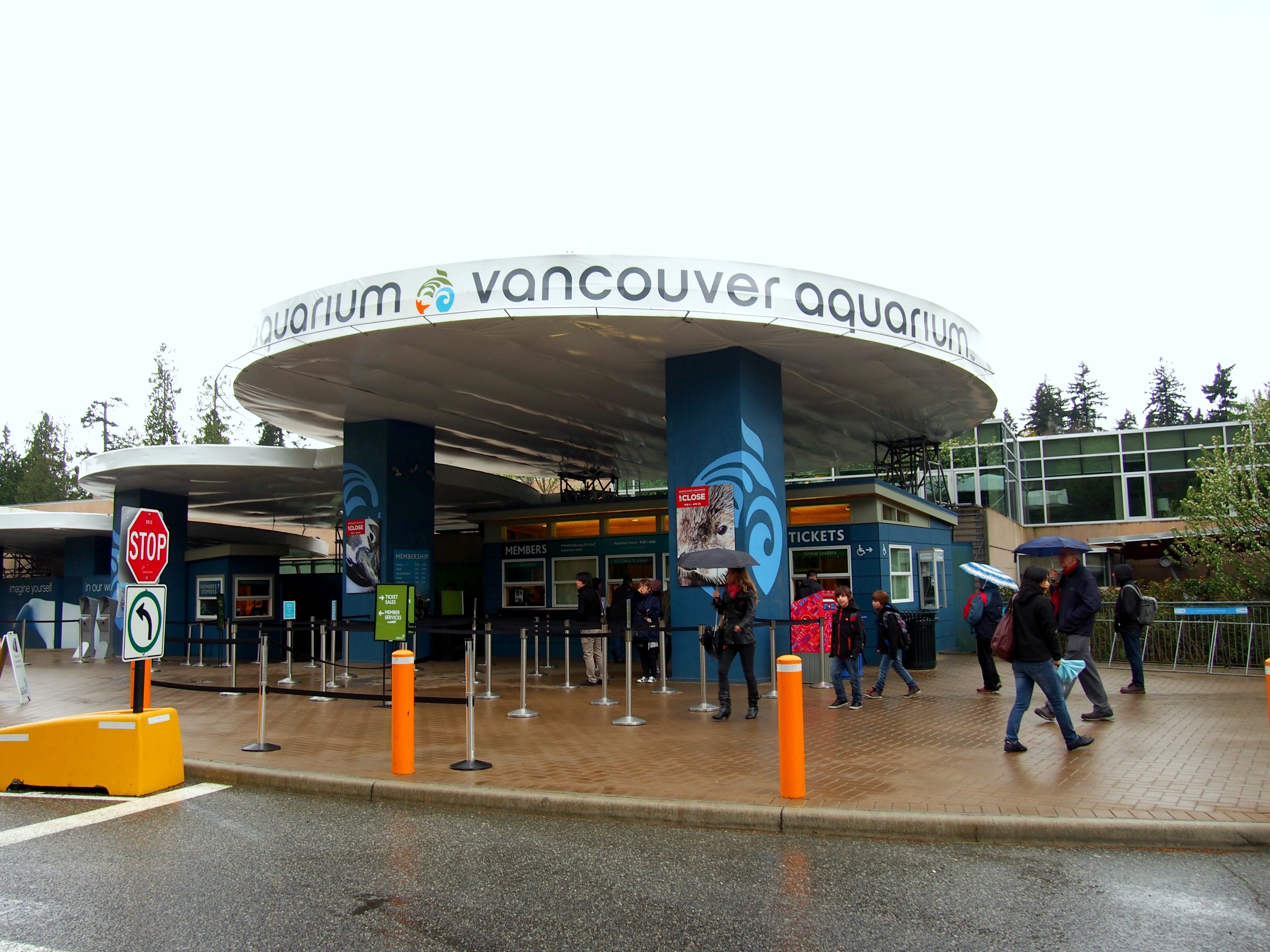 Vancouver Aquarium, a filming location for The X-Files

Located in West Vancouver, less than a 30-minute drive from Vancouver, Whytecliff Park is yet again a perfect example of a site we visited just because it was a filming location, but ended up discovering a beautiful place with magnificent views of the ocean and the surrounding mountains. There’s a full article on the park complete with Arrow and Once Upon a Time sceneframes here. 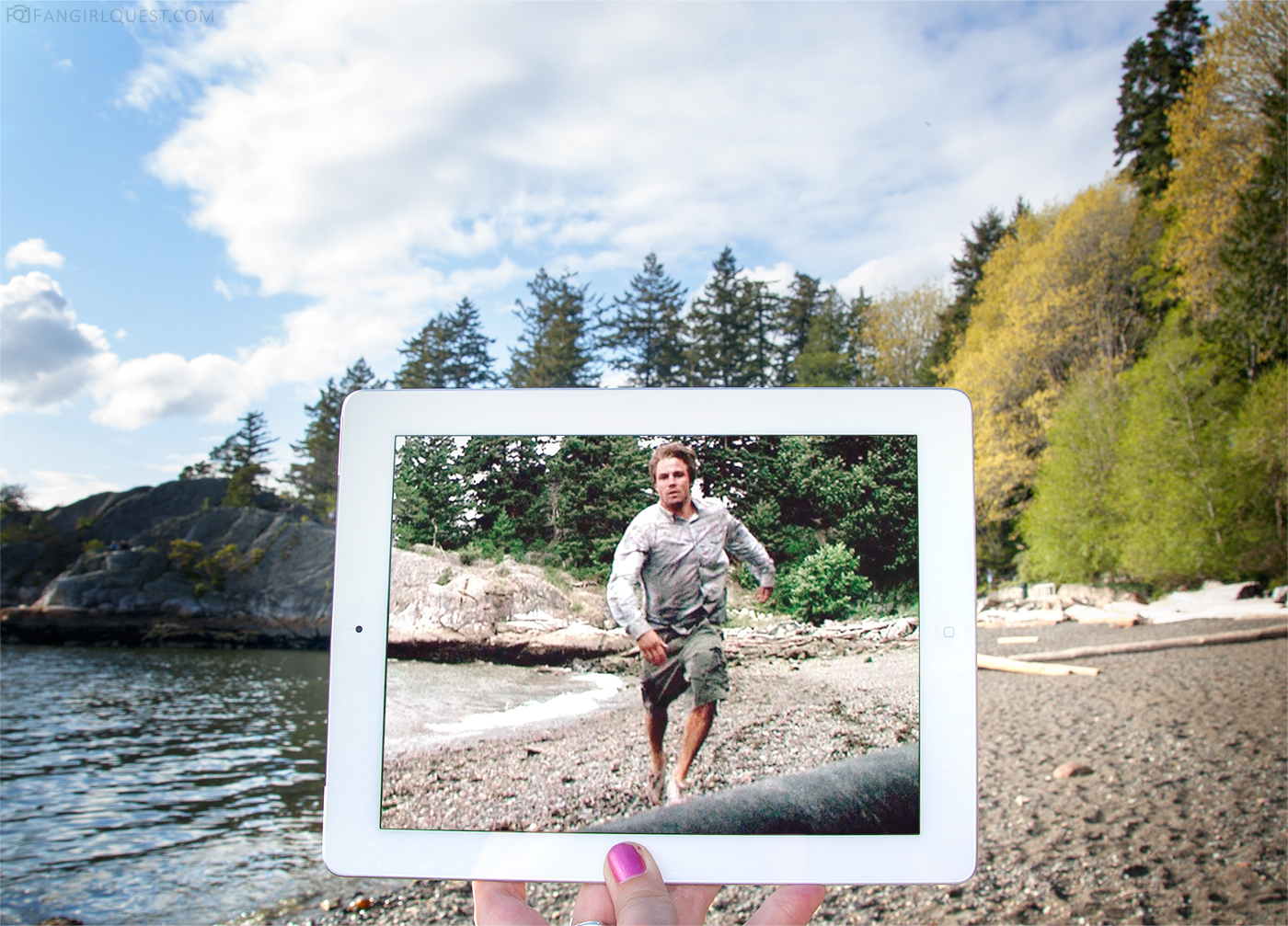 Oliver Queen AKA Arrow on an island. Except it’s not an island. it’s Whytecliff Park north from Vancouver, BC.

Grouse Mountain Resort is part of the North Shore Mountains in North Vancouver. In the winter it is a ski resort and offers a variety of activities year-round, from hiking to ziplining and paragliding. Surprisingly, we were there because it was used for a scene in The X-Files. We weren’t properly equipped to even go see the bear sanctuary at the top of the skyride. Sneakers and ankle-deep snow unfortunately don’t mix very well… Luckily you don’t need winter gear to admire the views from the visitor center. The sun was already set by the time we got to the top, so we got to admire Vancouver’s lights at dusk. 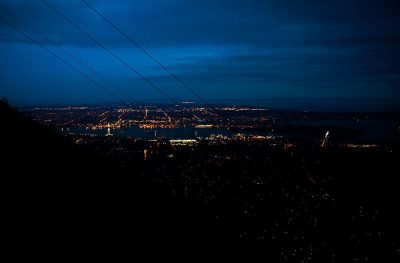 View of Vancouver from Grouse Mountain, BC, Canada 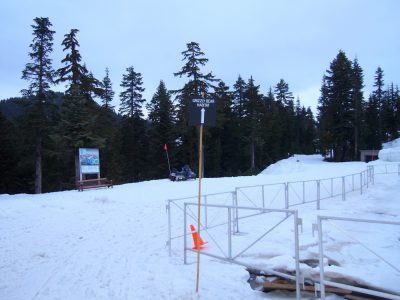 In addition to Stanley Park, the city offers several other beautiful parks that are well worth investigating even if you’re not a TV buff, but are even more interesting if you know what was filmed there. We’ve done a separate piece on park life in Vancouver that you can check out here. Also worth a visit is Deer Lake Park in the neighbouring city of Burnaby. Home to one of Supernatural‘s funniest scenes, the park also hosts the Burnaby Art Gallery. The Art Gallery is also a filming location, used often in Once Upon a Time and recently in DC’s Legends of Tomorrow. 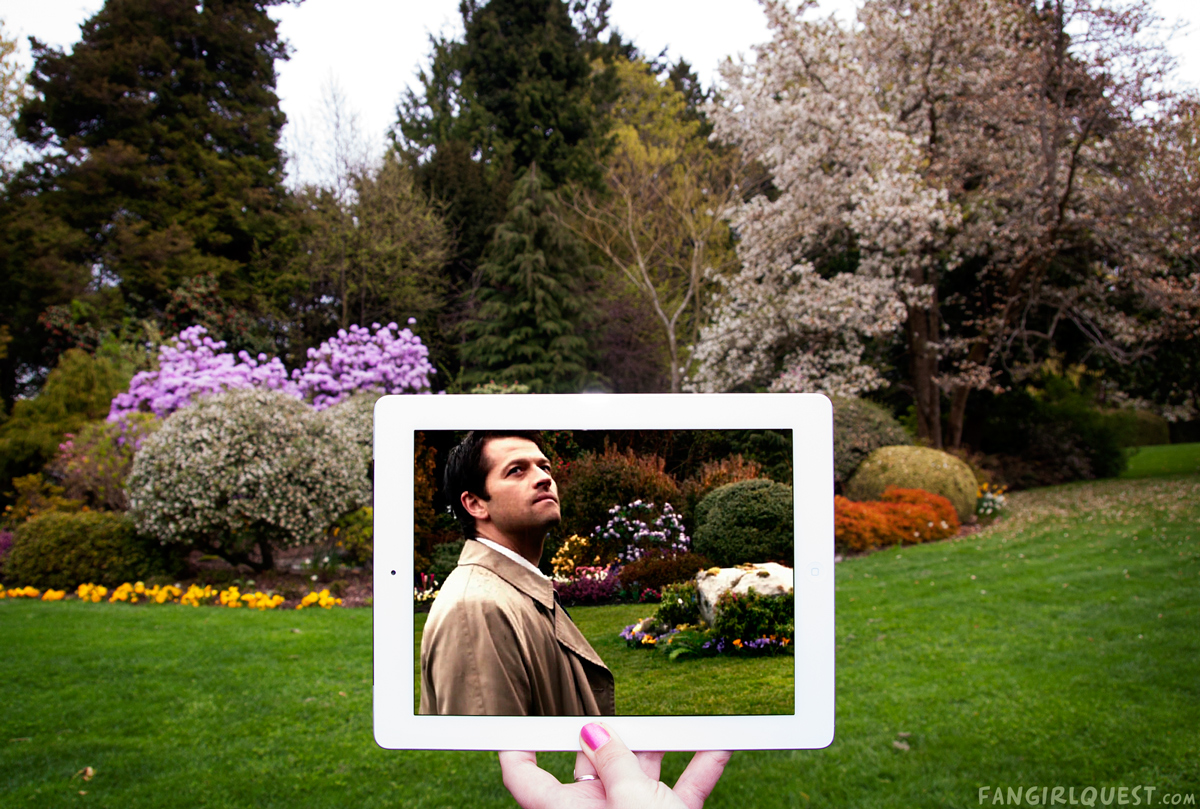 Misha Collins as Castiel in Supernatural at Cecil Green Park in Vancouver, BC, Canada

We’ve written about Riverview Hospital before and I’m pretty sure we’ll keep writing about it ’til the day we die. An abandoned mental hospital might not be your first (or second or third) choice when planning your itinerary but trust us, this place deserves a visit. Located east of Vancouver in Coquitlam, the sprawling grounds of the old hospital house several buildings, once grand and stately but now in varying degrees of deterioration. It’s creepy and it’s amazing and if a TV show is filmed in Vancouver, they have used this place as a location. Seriously, it can be spotted in every single show that is based in Vancouver. Every. Single. One. 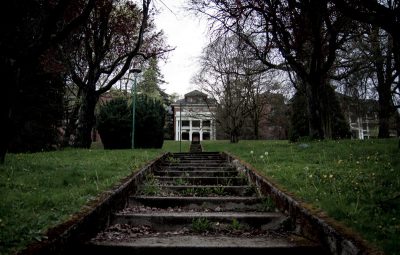 Riverview Hospital, Coquilam, BC, Canada. So spooky. So exciting. 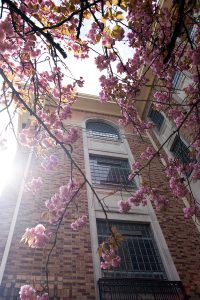 Riverview Hospital, Coquitlam, BC, Canada. A favorite filming location for Supernatural, The X-Files and Arrow, just to name a few. 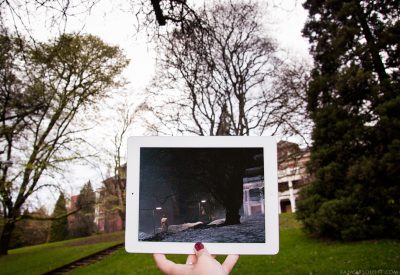 Less than an hour’s drive from Vancouver is the picturesque town of Fort Langley. It is the home of the Fort Langley National Historic Site, an old fur trade post as well as a popular filming location. Fort Langley Community Hall is the Storybrooke Town Hall in Once Upon a Time, and Supernatural and The X-Files have also made good use of the town’s historic atmosphere. 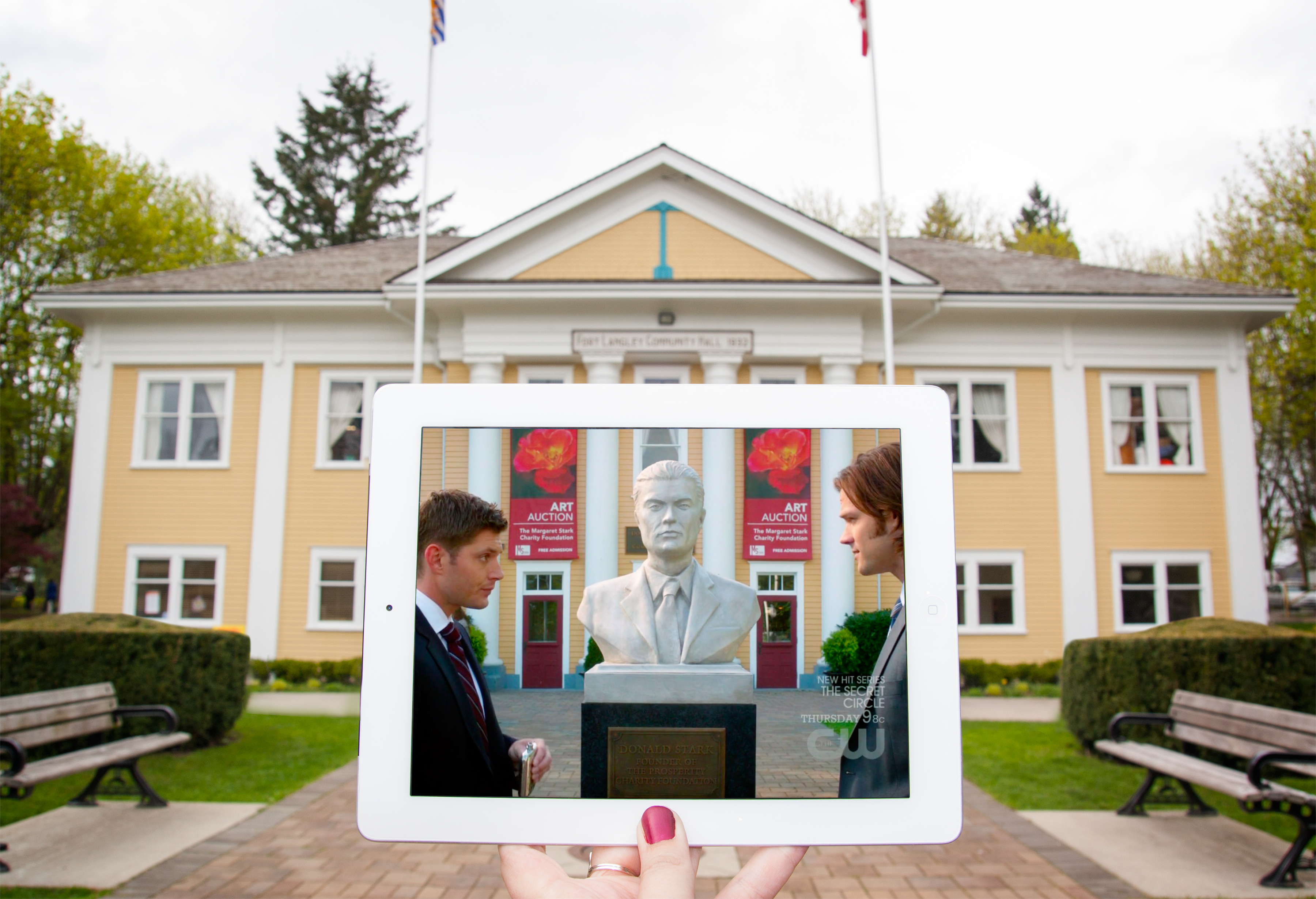 If you’re ever in town, make sure to visit the Everybody Loves Candy Shoppe and try their salt water taffy – it’s the best we’ve ever tasted! In addition to soothing our sweet tooth, we had lunch at Planet Java Fifties Cafe and it was one of the tastiest meals of the entire trip. The sinfully rich and smooth chocolate milkshake certainly didn’t hurt either. Pretty sure we weren’t the only ones who have enjoyed this diner’s burgers and shakes, since we spotted some familiar faces on the walls…

We spotted some familiar faces in Planet Java Fifties Cafe in Fort Langley!

Staying in a city where several of our favorite shows are filmed and knowing that filming was in progress when we were there in March, we were carefully optimistic that we might even find our way to a Supernatural set and catch a glimpse of the action. However, on our last day in the city we’d pretty much given up hope. It was Easter Monday and we figured that filming crews would still be on Easter break – that is until driving in the middle of nowhere somewhere south of Vancouver, from one obscure filming location to another, we spotted a filming sign! Still unable to believe our luck, we thought we’d stumbled upon an old sign that someone had forgotten to take down. Of course we couldn’t NOT follow the signs and to our amazement, ended up on an actual Supernatural set!

Making sure not to disturb filming, we politely asked if it was okay to stay and watch and were very kindly showed to an out-of-the-way spot where we could wait. Now, we’re used to waiting for hours on set. That’s usually what it takes to meet our idols and we’re fine with it. But this time it seemed luck was truly on our side, because we’d barely waited fifteen minutes when these dudes showed up! We were the only fans there, so we had a nice little chat and even got to show them a couple of sceneframes and talk about the trip. In all the excitement we actually forgot to ask for a picture. Luckily Mr. Misha Collins was kind enough to suggest it himself! We couldn’t have asked for a better ending to our Vancouver adventure.