SUP? Stand Up Paddleboarding In Helsinki!

Mall Of America – So Much More Than Just A Mall

Black Widow and Captain America at a mall in Cleveland. Just hangin'.

We were wondering how to send our best wishes to all our friends, followers and random website visitors today, on the 4th of July. But there was really just one right answer: it would have to be something related to Captain America AKA our lovely little superhero noodle Steve Rogers, played by the most adorable human dorito ever, Chris Evans. So, here’s a quick look at a few Captain America filming locations in Cleveland, Ohio and some fun memories we made with our excellently fun Gishwhes team mates.

Filming locations for The Avengers in Cleveland, Ohio 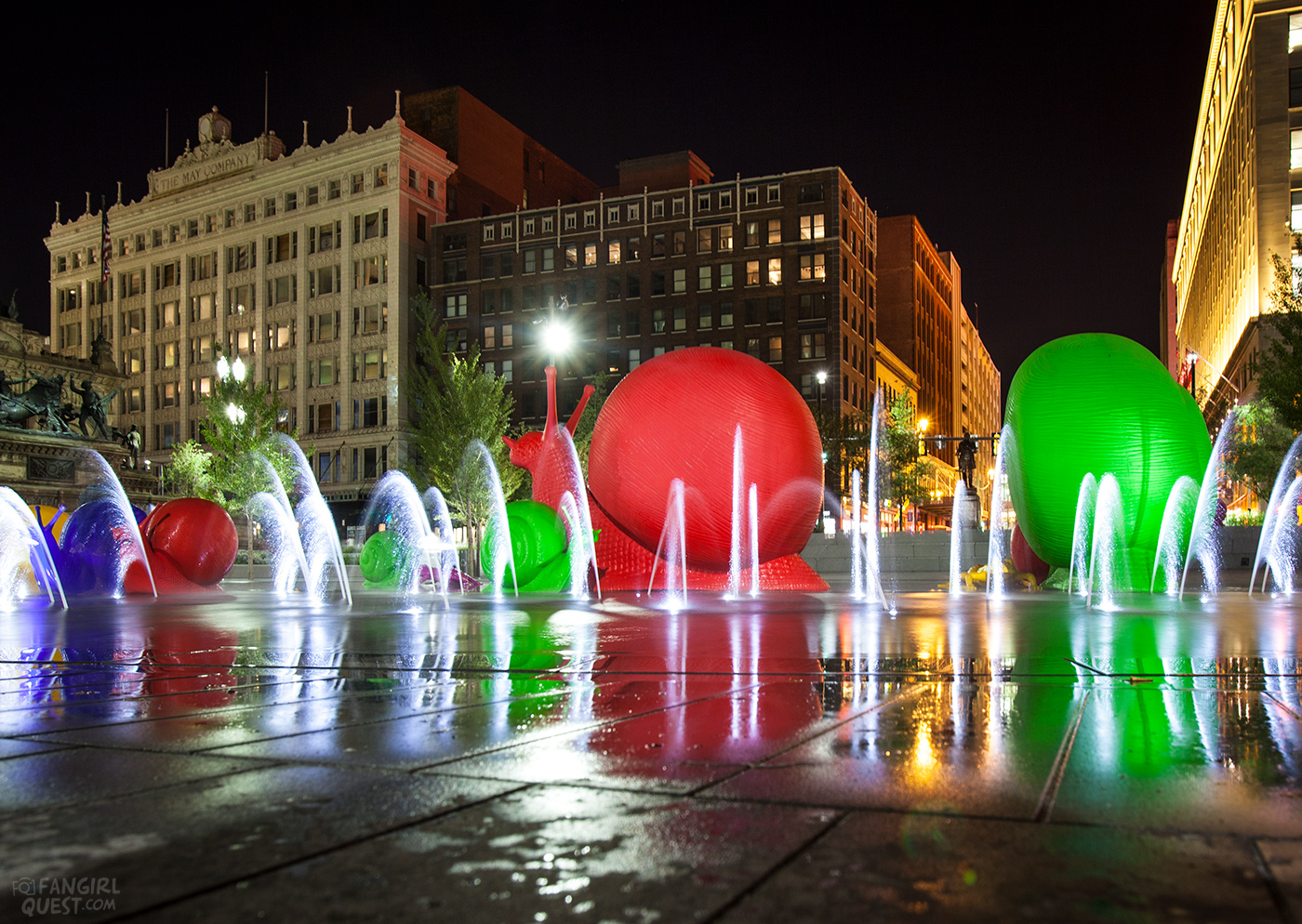 A colorful fountain in Cleveland late at night.

Our very first visit to Cleveland happened quite late in the evening. We’d arrived in Ohio just a few hours before and met up with one of the best Gishers of all times, Kaela, for the very first time. It was amazing to meet someone we’d talked to for so long in person! Various hugs and laughs and giggles later, she hopped in our car and we drove downtown to check out one of the best-known filming locations for The Avengers.

(What is Gishwhes, you may ask, and we’ve got the answers right here.)

The location we were looking for actually doubled as Stuttgart, Germany. Which, as you know, is not even close to Ohio. Here be the Loki sceneframing photo with our other bae, Tom Hiddleston, shouting “KNEEEEELL!” to some German folks (quite likely clevelandian extras). 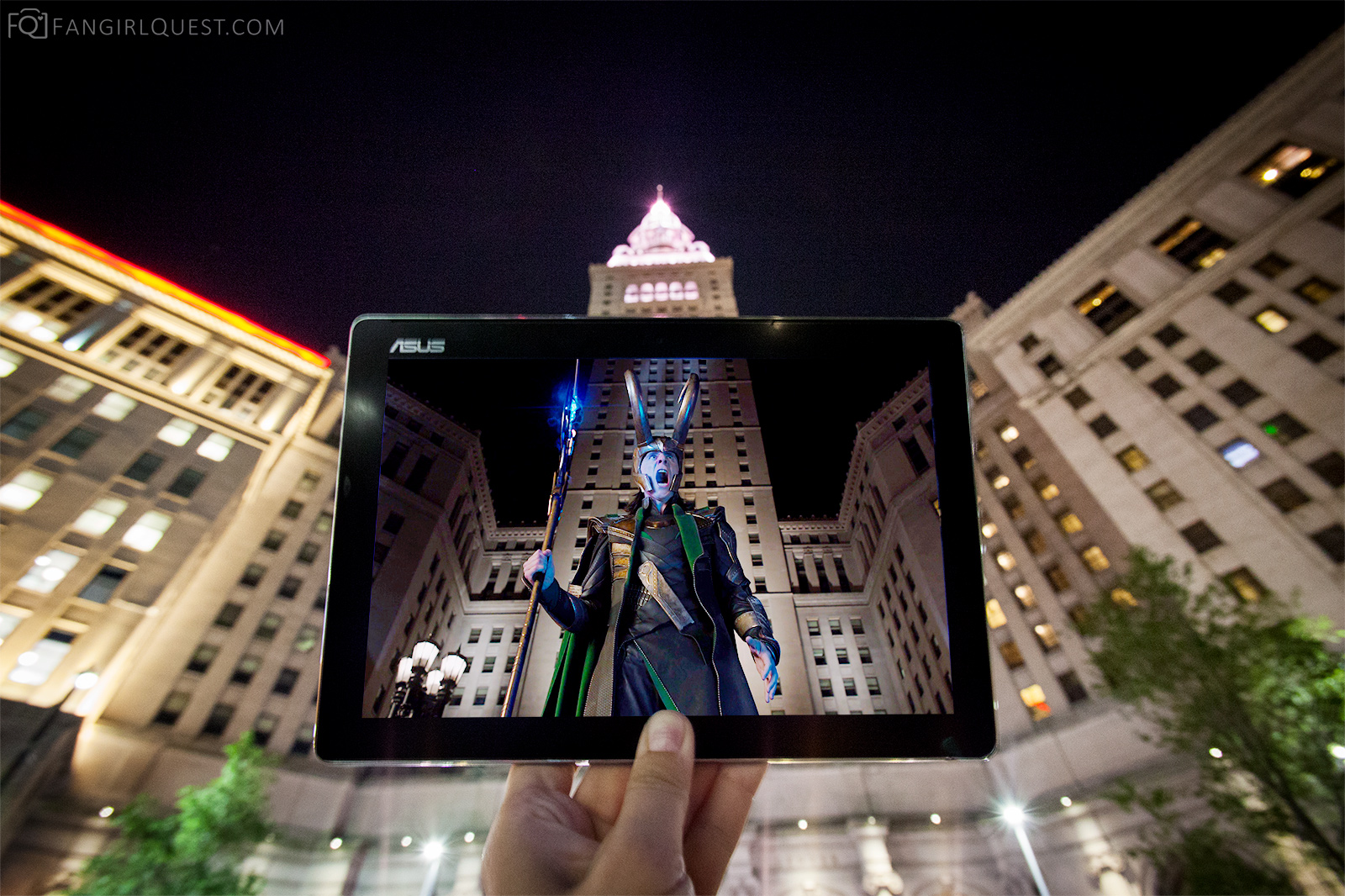 Tom Hiddleston as Loki in The Avengers, filmed partly in Cleveland.

You can see more of our sceneframing photos here and by browsing the Sceneframing tag. And of course, on our Instagram!

We literally had to kneel in front of Loki to get the angle right, so this might actually be one of the most accurate sceneframes we’ve ever taken.

Another Gishwhes team member, Evie, joined us as well and we all just instantly hit it off like we’d been friends forever <3

Soon after getting the gang together, we discovered that the internetz had lied to us about the interior location where Loki walks down the stairs to go and shout to German people just outside: it wasn’t the building behind him (which is Terminal Tower), but another place about half a mile down the street: the Cuyahoga County Court House.

The kind person, an honest-to-god Sheriff, who pointed us to the right direction, also contacted the man working there that night. In the end, he ended up escorting us through a park to make sure we’re safe, and we got to sneak in for a half an hour private tour of the building. So amazing! So spooky! So much fun!

And since we had the place all to ourselves, we posed for some dorky Gishwhes-y photos with our team mates too! Because… why not? 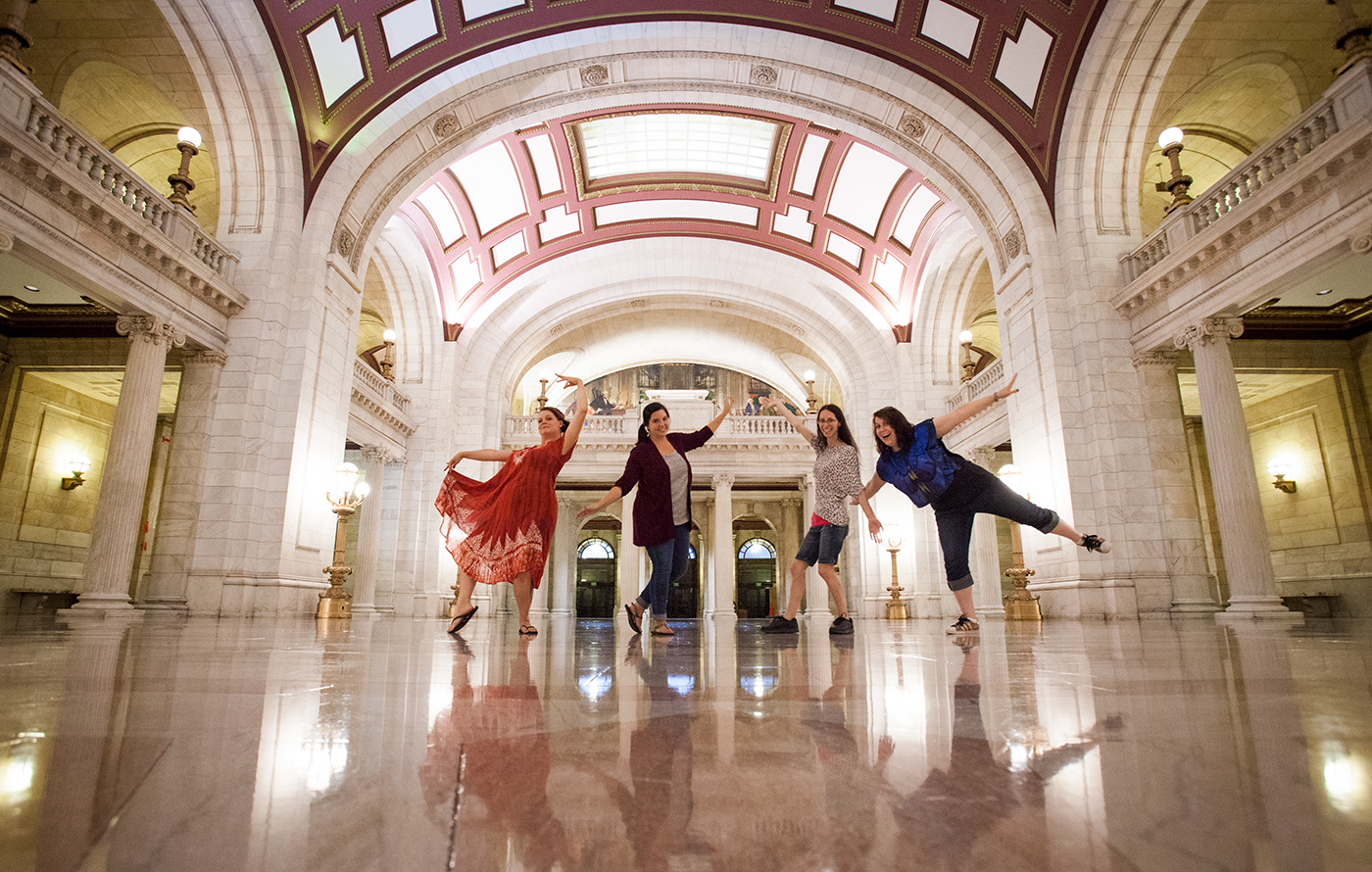 4/15 of Team Scrumtrulescent, the future winners of Gishwhes!

Here’s one of the sceneframes we managed to get in this beautiful building. 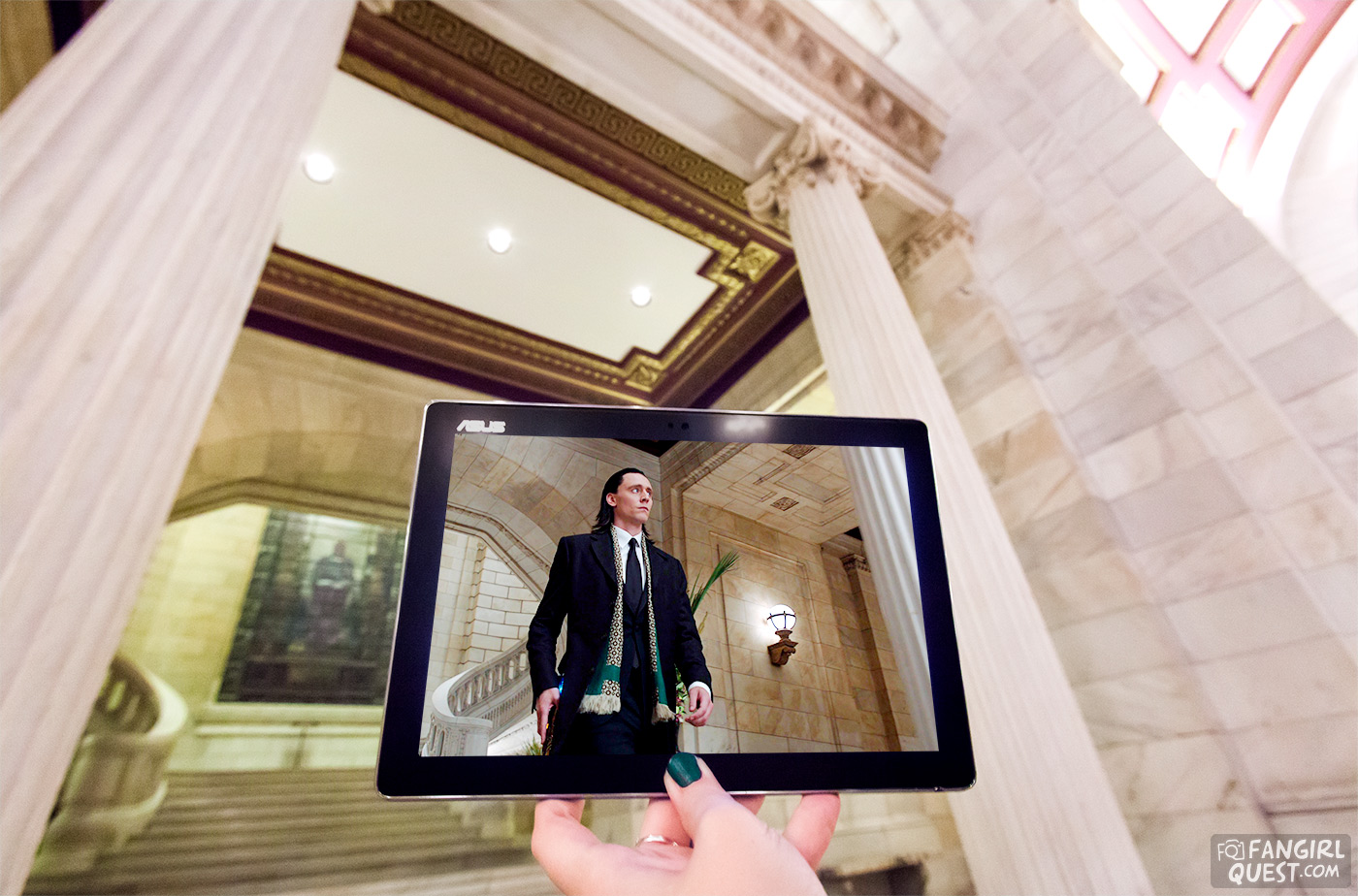 Tom Hiddleston filming a Loki scene in The Avengers in Cleveland, OH

The next day we headed back to the city for more photos and touristy things. Our lovely team mates joined us again, which resulted in more fun photos. 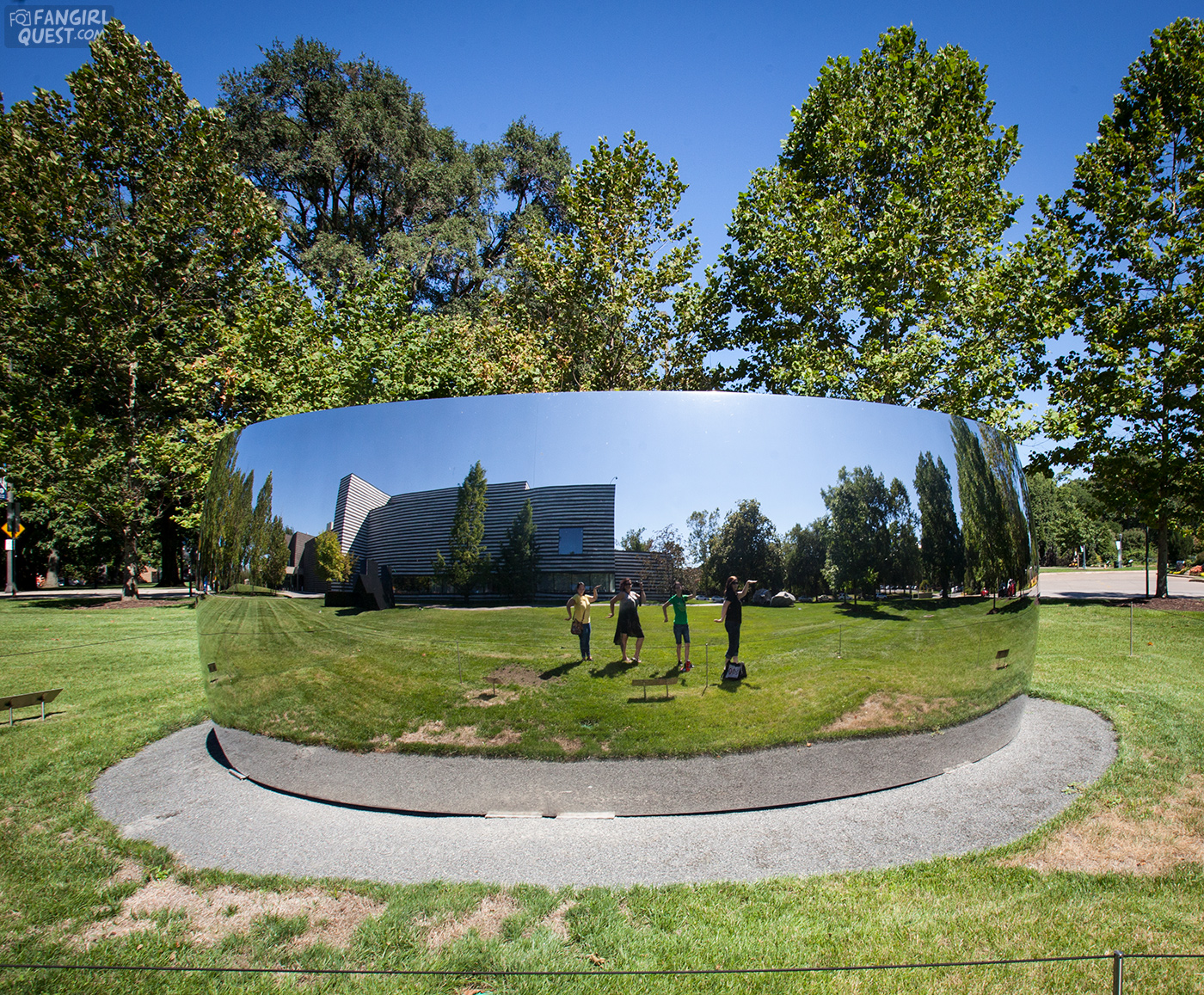 Another fun photo with our Gishwhes team mates in Cleveland.

And since we are very much rock and roll girls and made it all the way to Cleveland, we absolutely couldn’t not go and check out the Rock and Roll Hall of Fame.

There was actually like a thousand things we snapped cellphone photos of, but here’s a couple of Tiia’s favorites: Jimi Hendrix’s notes for Purple Haze and Johnny Cash‘s tour bus. JOHNNY CASH’S TOUR BUS. AND THEY LET US GO INSIDE. 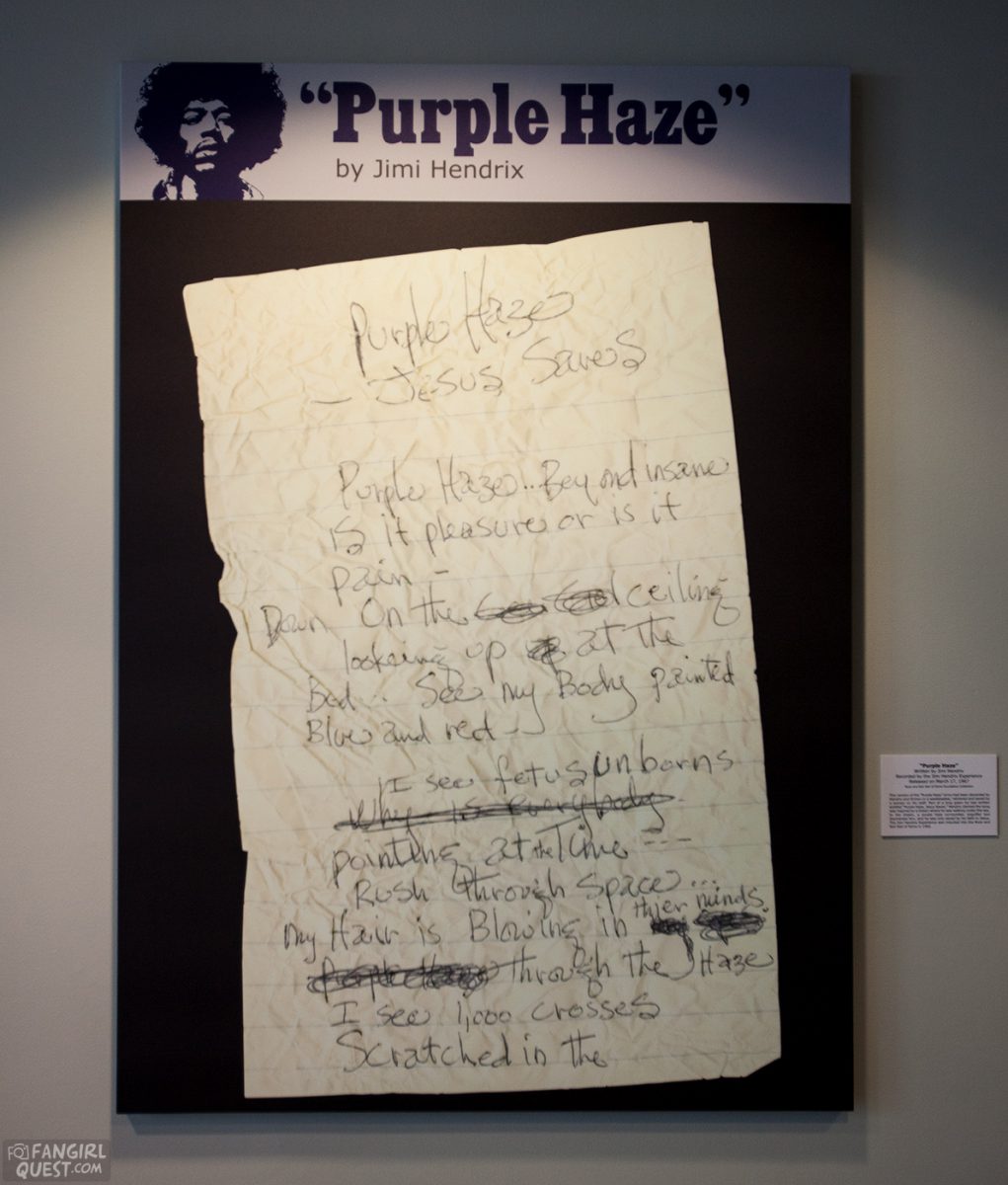 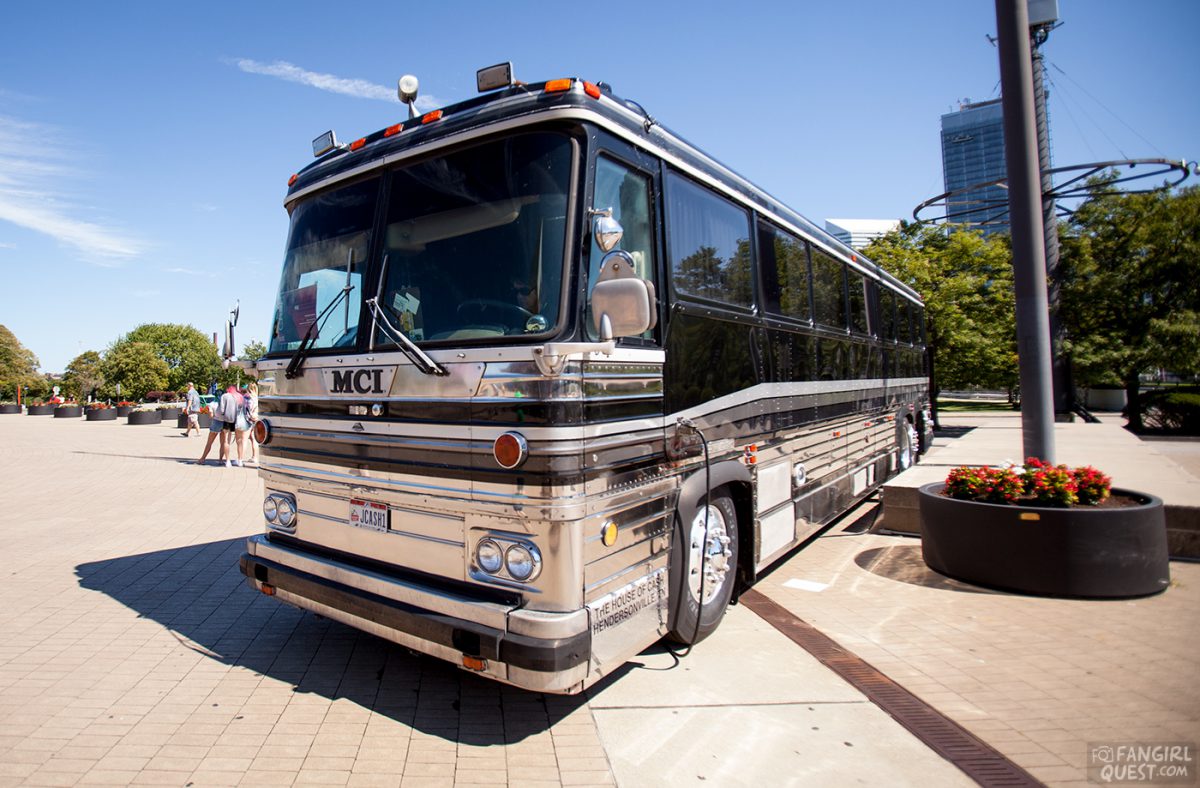 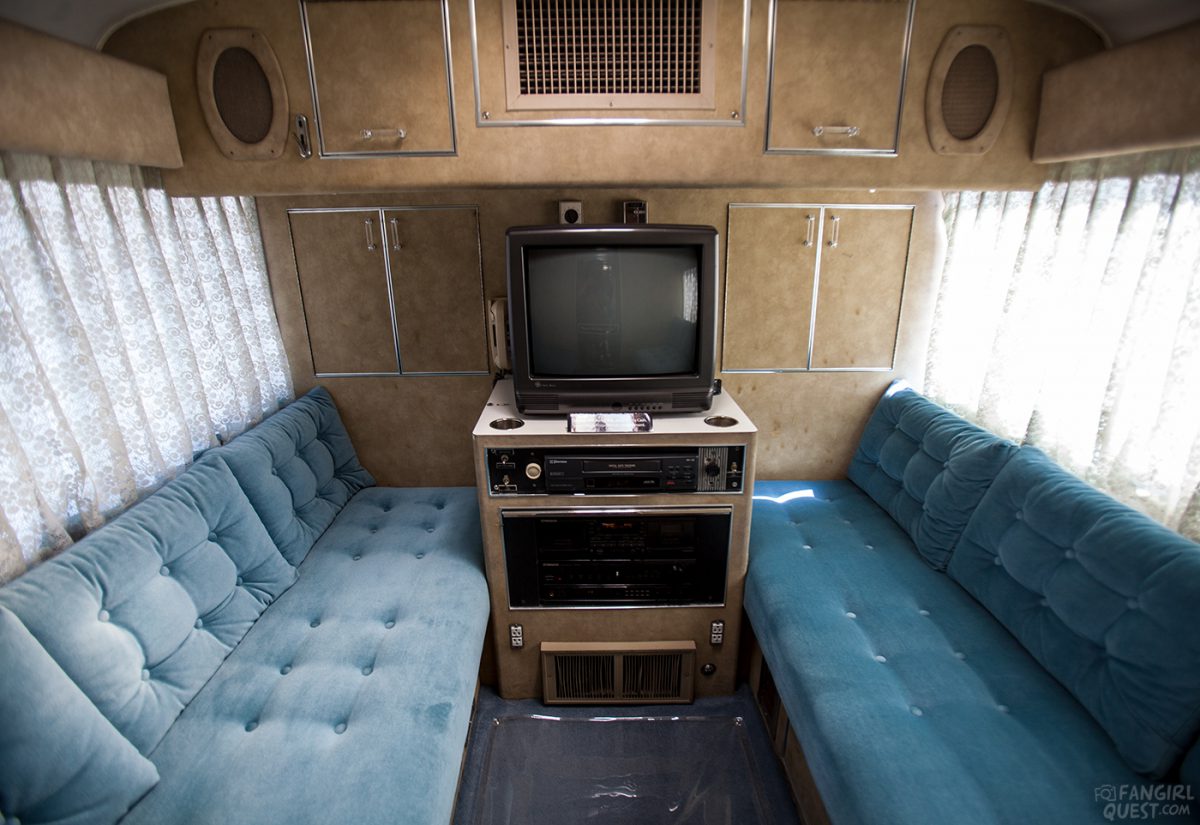 But ah, yes. Captain America. The reason this whole happy post full of Cleveland memories came together! The most American superhero of all our favorites! The guy who wears the colors, defends the country and is as loyal as a little puppy wearing a stars and banners cape!

We’ll start with Steve Rogers’ best pal Bucky Barnes, played by the internet sensation Sebastian Stan. This was also a tricky one to take as he was jumping off the bridge and right into a busy intersection. But we managed, and it made us terribly happy. 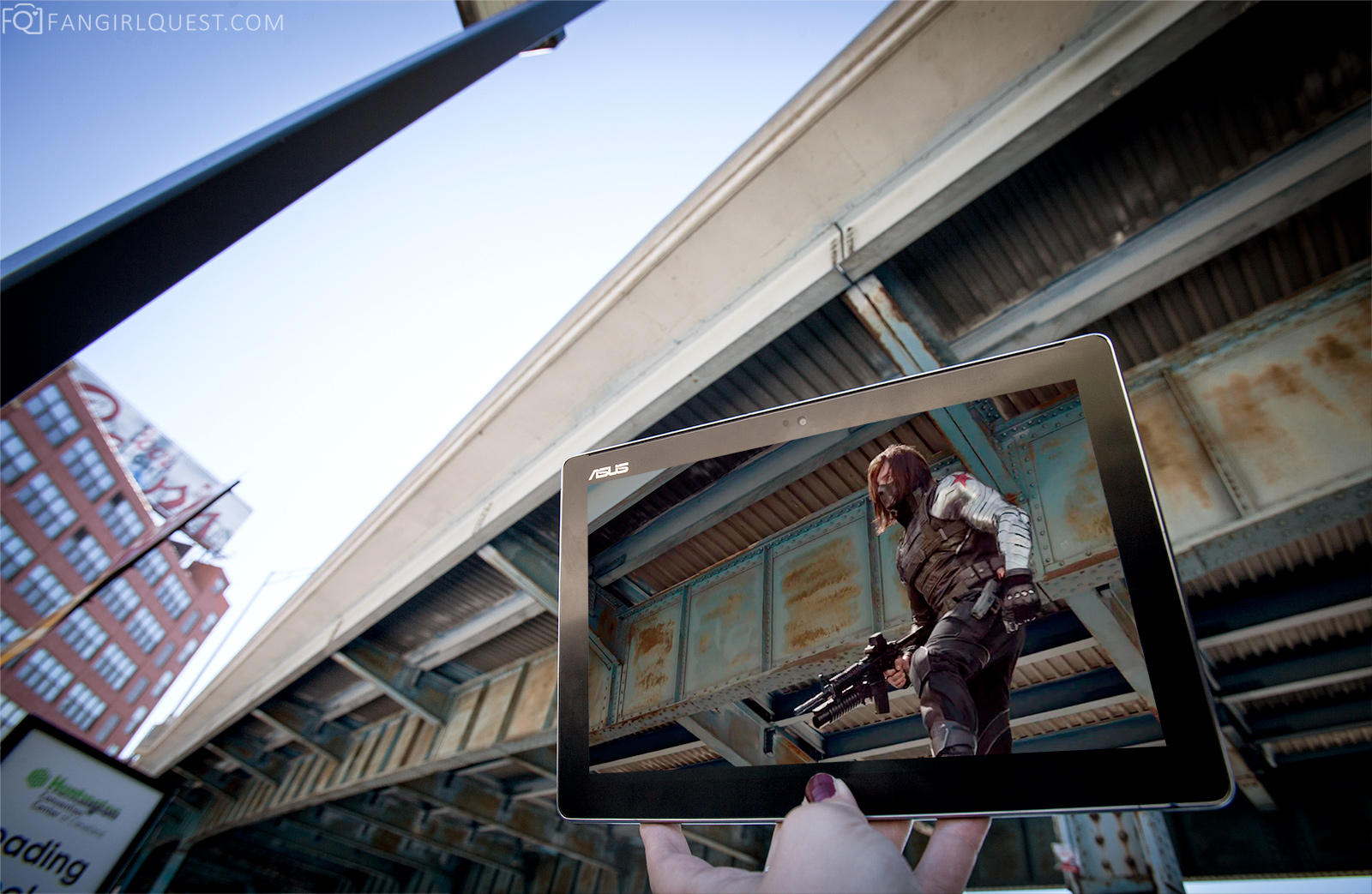 Bucky is not pleased. A Captain America filming location in Cleveland.

This is where things got tricky again: one of the mall security guards spotted us and for some reason, decided it was his life’s mission to forbid us from taking any photos.

Luckily, we had already managed one of the sceneframes and then (sneakily!) took another one on the escalator. 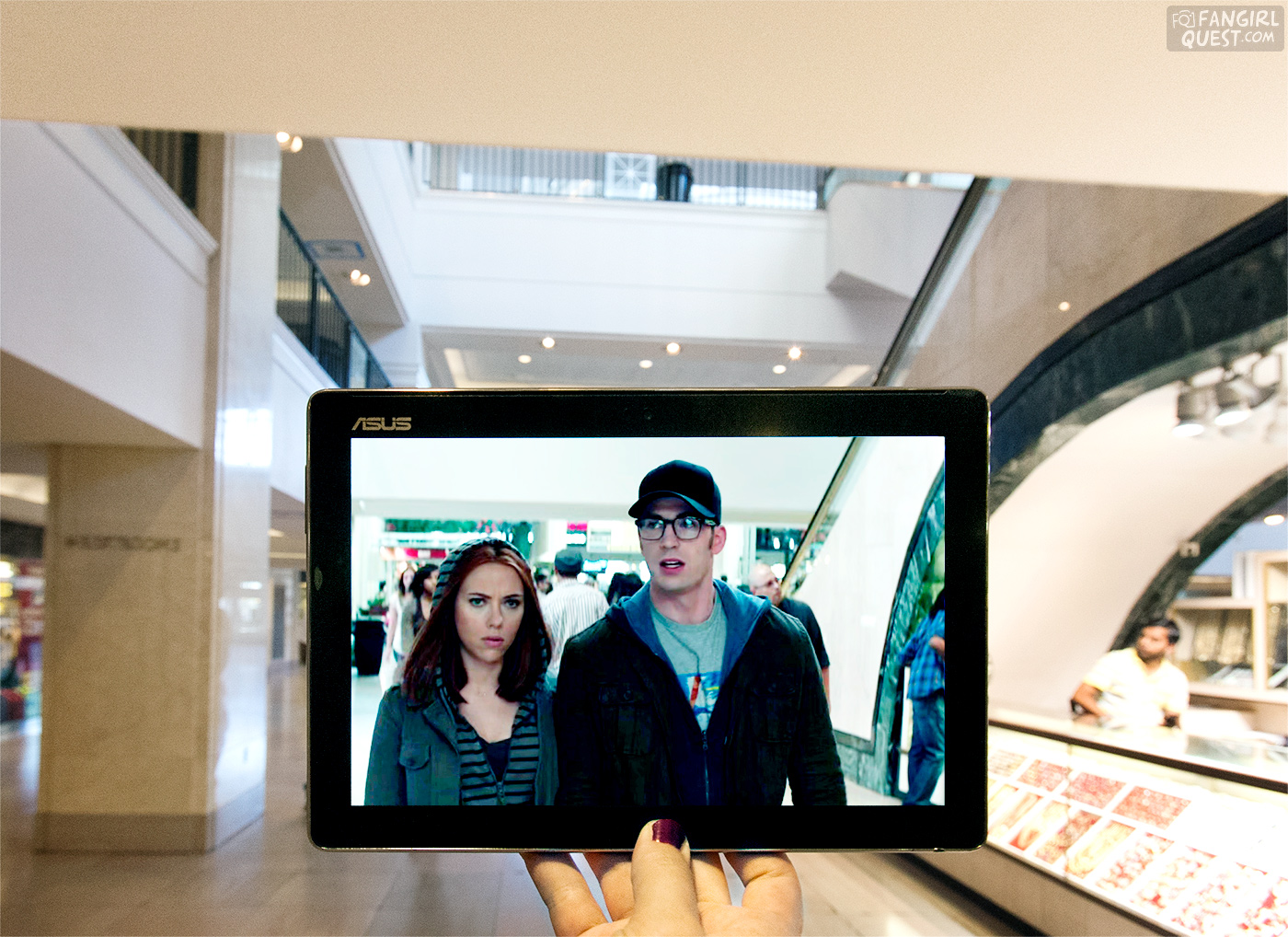 Black Widow and Captain America at a mall in Cleveland. Just hangin’.

Photographing on the escalators isn’t ever easy (we’ve done it before with at least Paddington), but sometimes… it’s worth it.

Like this time: we managed to capture THE KISS.

And with it, we’d like to wish Happy 4th of July to all you US citizens! We’ve enjoyed our adventures in your big, beautiful country and hope to make it back soon again. 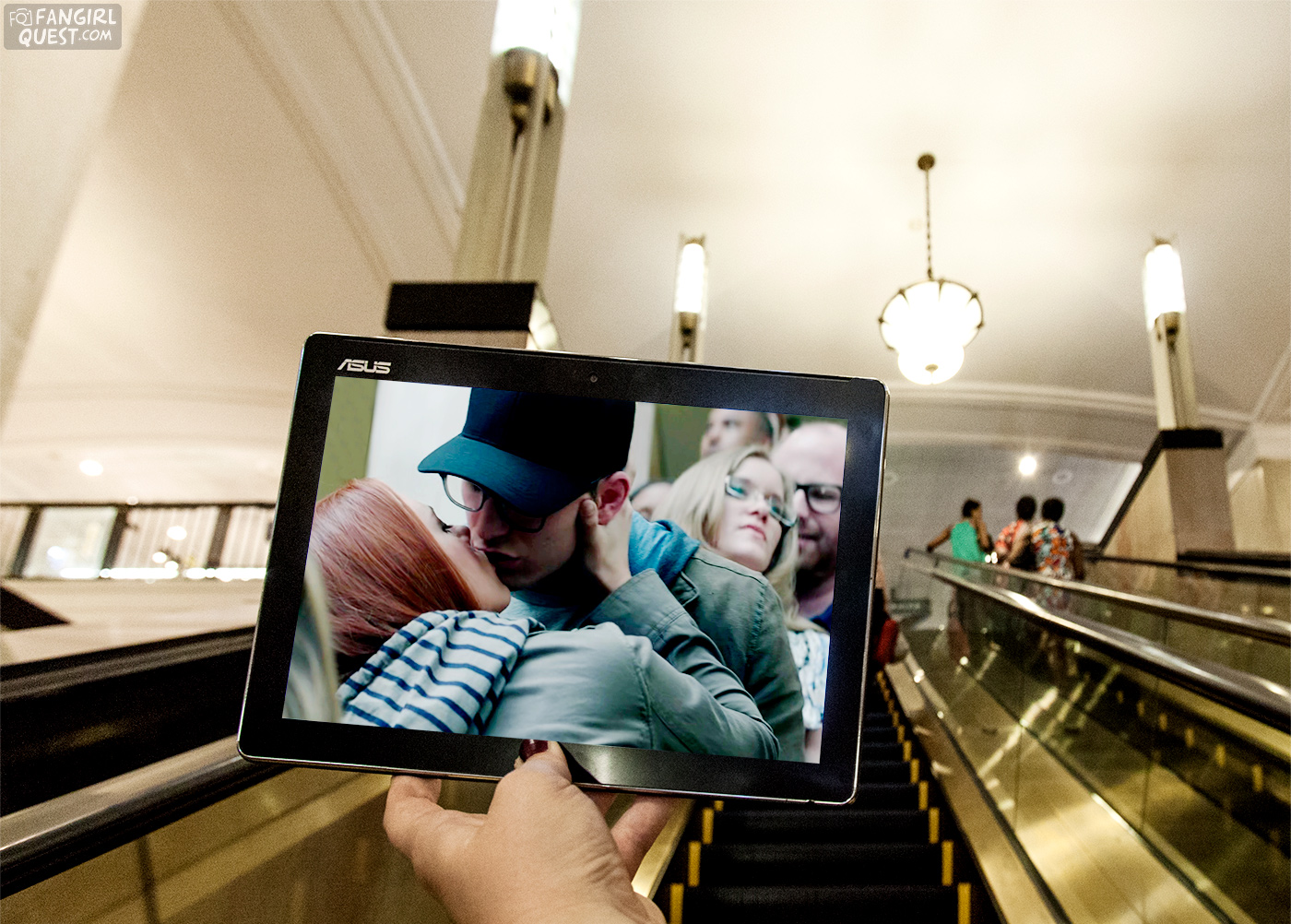 THE KISS: Scarlett Johansson’s Black Widow and Chris Evans’ Captain America do the unexpected to distract the bad guys.