Roadtrips — Why Do We Love Them So Much?

Canal Cruises, Good Food And The Amazing Race In The Hague

Spring - not a bad time to visit Holland!

Our main reason for visiting The Hague in The Netherlands this spring was to celebrate the milestone birthday of two dear friends, but luckily we also had time to take a quick touristy look at the city. We managed to fit some fun things into the couple of days we spent in The Hague: A cruise along the city’s many canals, great Indonesian food and a comfy stay at the Novotel hotel in the very center of the city.

While The Hague might not be the most obvious choice for your next destination, the city has a lot to offer from culture and shopping to architecture both old and modern. The lovely beaches of Scheveningen are also just a quick tram ride away.

As movie bloggers we obviously checked out a few select filming locations the city has to offer, most importantly the Peace Palace (Vredespaleis). Built in the early 20th century the beautiful building houses the International Court of Justice but was also a gorgeous background for one of Satu’s favorite reality shows, The Amazing Race.

Comfy stay with Novotel in the heart of the city

The Hague is not short of options for accommodation, but we were invited to stay at the Novotel Den Haag City Centre hotel and were not disappointed! The Hotel is located in the very heart of the city next to tram routes, stores and restaurants and is just steps away from the city’s main shopping street.

The rooms are spacious and comfortable and ours had both a double bed and sofa bed so we could really spread out. There was also a desk for working and a separate toilet and bathroom, which we particularly appreciated. 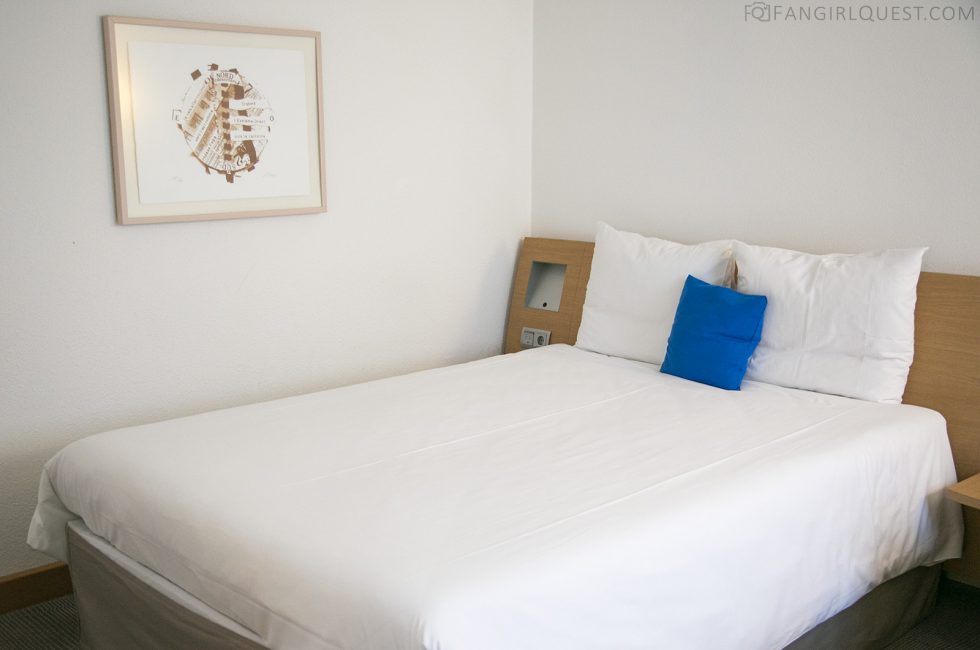 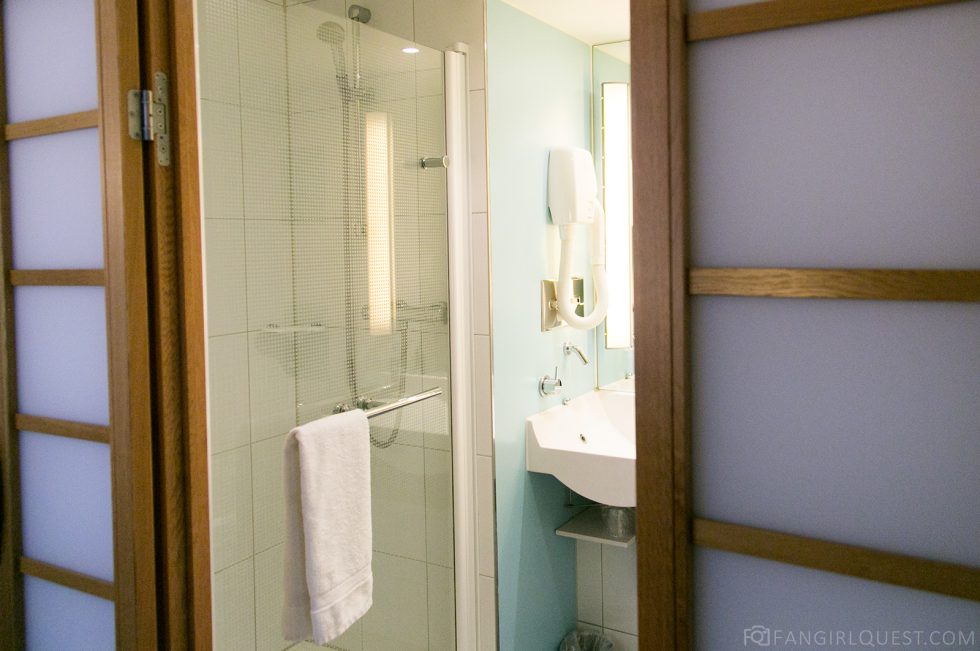 The door to our bathroom 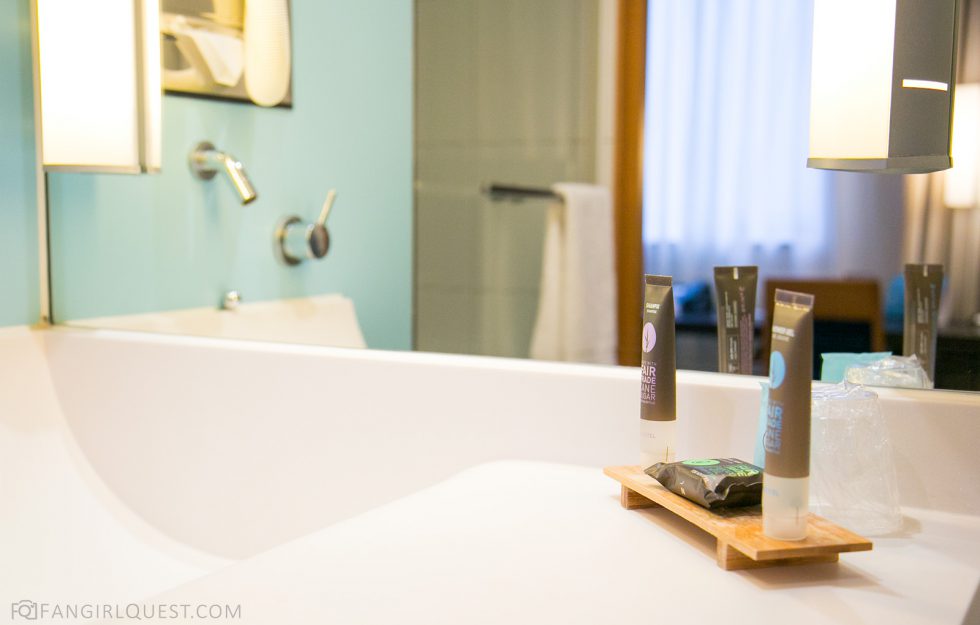 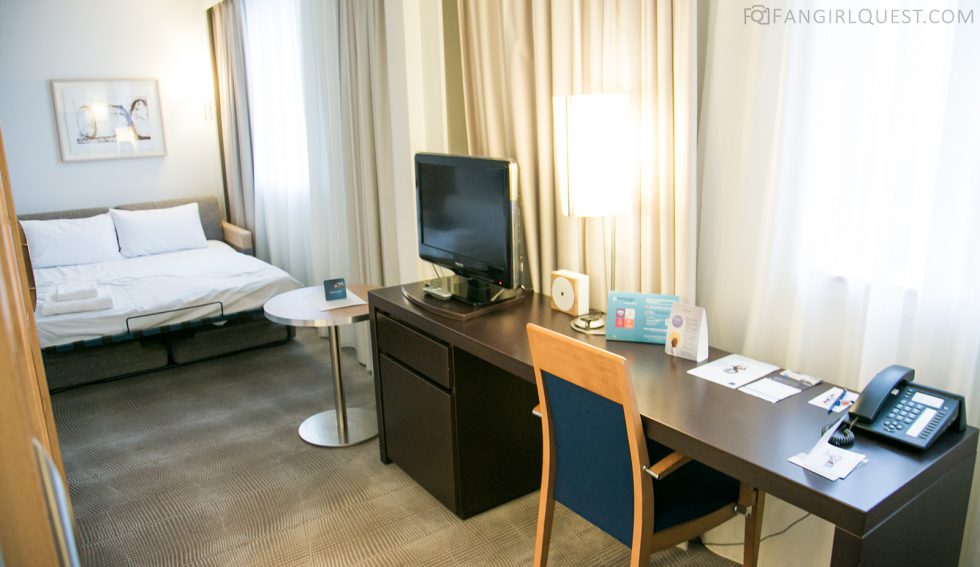 The desk space next to our bedroom

One of our favorite things about staying in any hotel is the breakfast. While there are certainly differences in quality, Novotel’s breakfast was one of the better ones we’ve had! While we loved the hot buffet of scrambled eggs, bacon and sausages as well as the cold buffet with several different kinds of breads and pastries, cold cuts, fruit and yogurt, the best part was definitely the sweet treats: fresh donuts and pancakes! We know they’re not the healthiest choice but come on, we were on holiday!

For more information on Novotel hotels as well as other hotel chains under the Accor brand and to make a booking, check out their website.

Our first night in The Hague we were quite exhausted from all the walking in Copenhagen but managed to sum up enough energy to go have dinner in an Indonesian restaurant called Garoeda. Though it might not look like much on the outside, inside we found three floors full of atmosphere, lots of people and great decor. The restaurant is clearly popular among locals, which is always a good sign for us. The service was friendly and sympathetic, and the dining room on the third floor offered beautiful views of The Hague city streets.

Indonesian restaurants are famous for their rice tables, in other words a selection of their specialties served with rice and other side dishes, so of course we had to try this. The waiter did explain what all the different foods were, but there was so much on the table that by the time we grabbed our forks we’d forgotten most of their names. 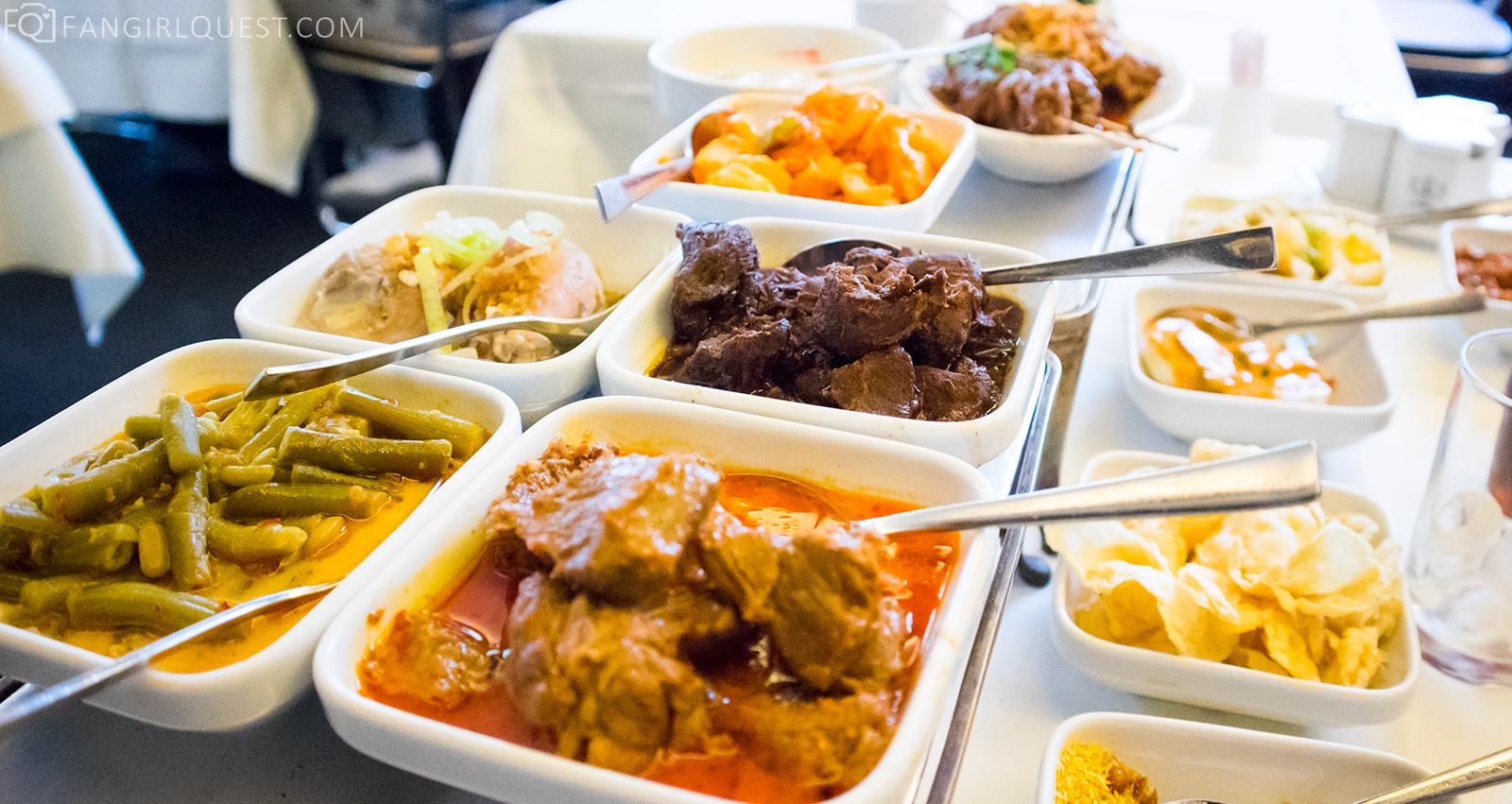 Only a fraction of the portions in our table. Delicious!

That didn’t stop us from enjoying the spread before us, and while some of the sauces were a bit too spicy for our taste (I know, we are weak), we did manage to clear out most of the plates. Tiia’s favorites were the vegetable soup with loads of coconut cream and the dark and sweet meat stew with a bean side dish, while I think back fondly to the succulent chicken legs that were so tender the meat just fell off the bones. 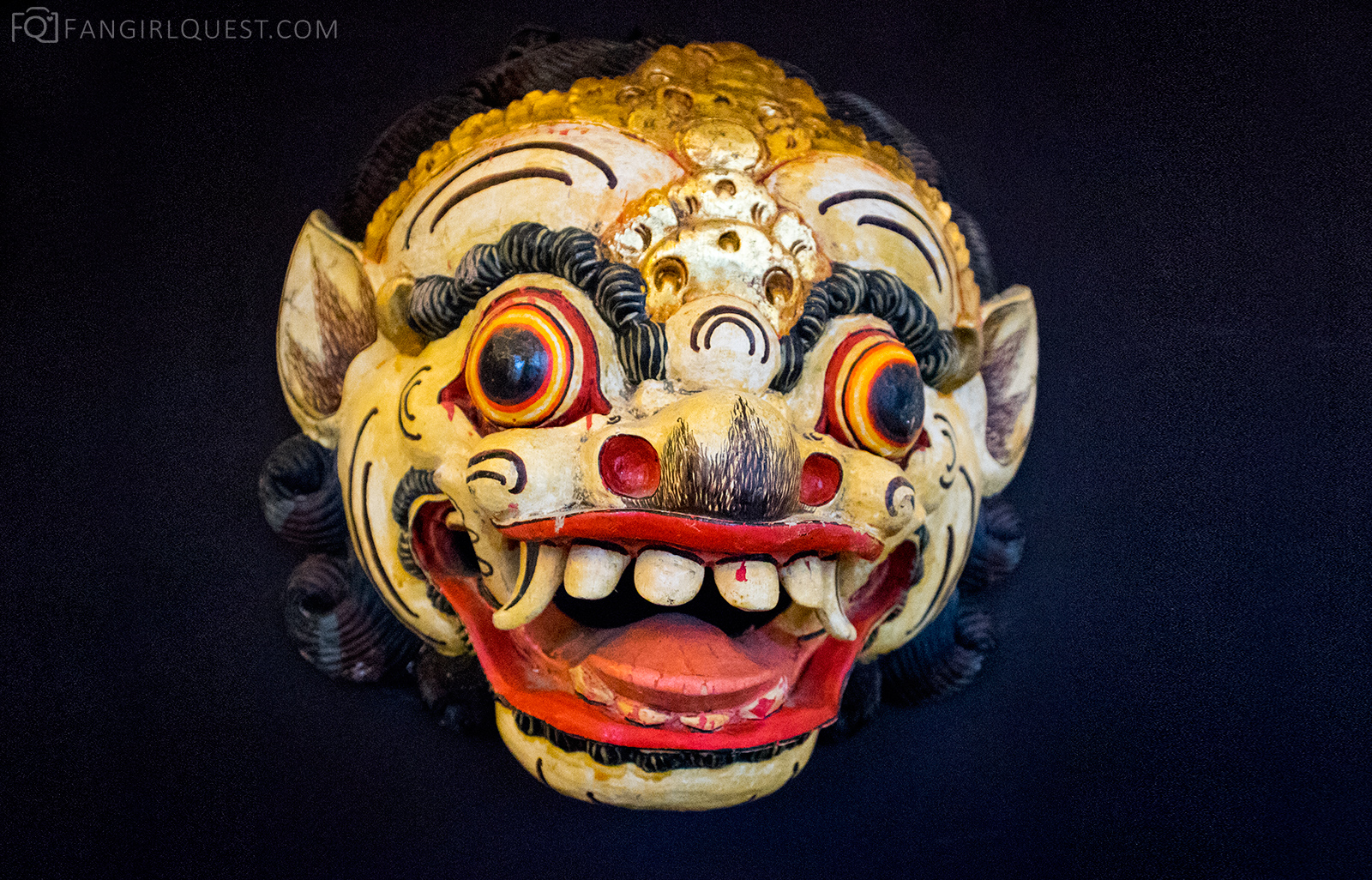 Cruising around The Hague

Our second day in The Hague was eventful and so much fun. After breakfast and a quick round of shopping we headed to a small dock near the city center to join our birthday girl and boy Jenni and Niels and some other friends for a cruise with De Oievaart around the many canals of The Hague. The boat was a low and wide barge, big enough to fit our large group comfortably. We would soon learn why a barge is the best option for seeing the canals, as many of the bridges we went under were so low that we actually had to duck so as to not hit our heads… 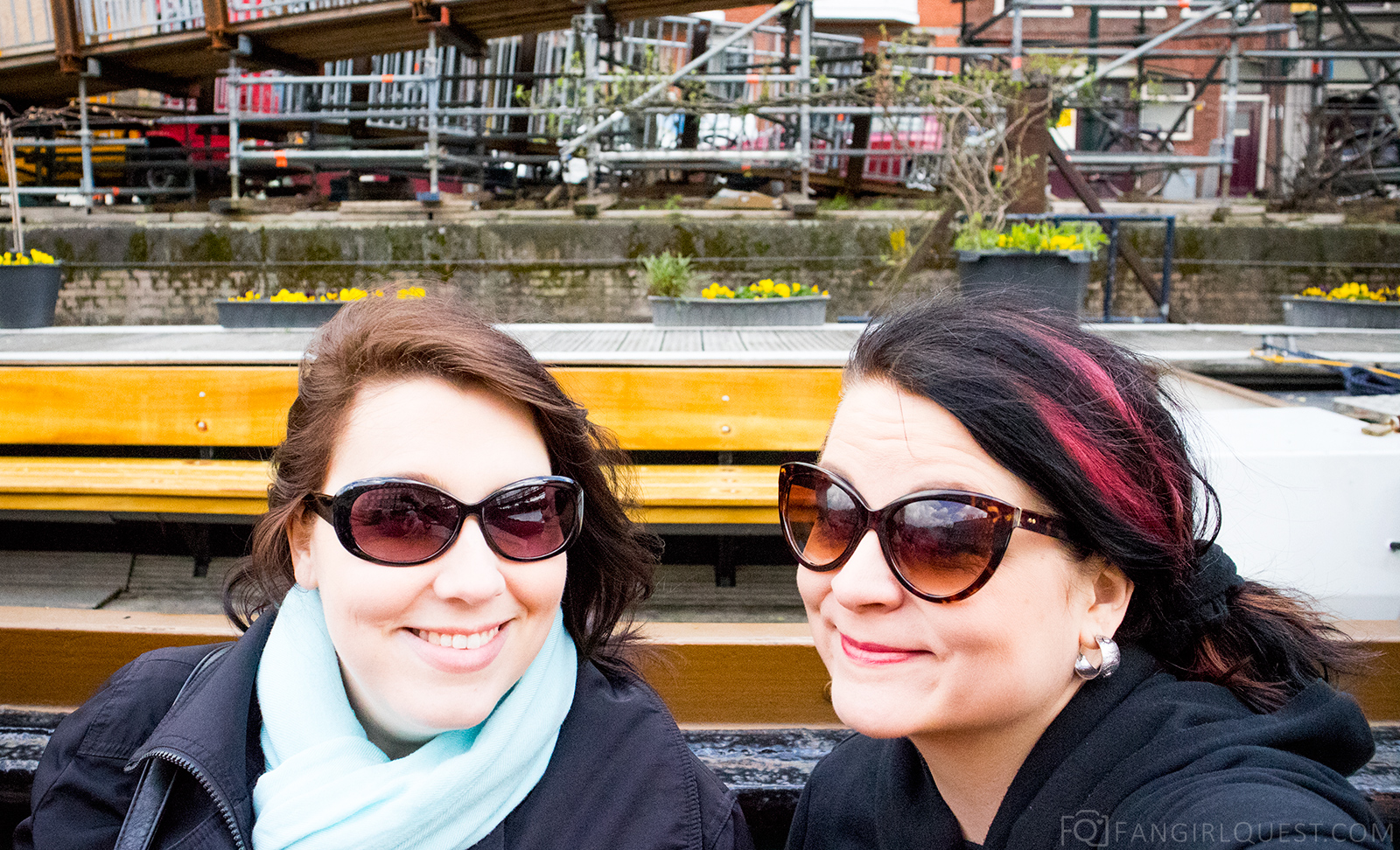 The tours are guided by volunteers and ours was a lovely local fellow called Piet Fuchs. He was quite an expert on the city and its history, so in addition to seeing the sights we also learned a lot about The Hague. 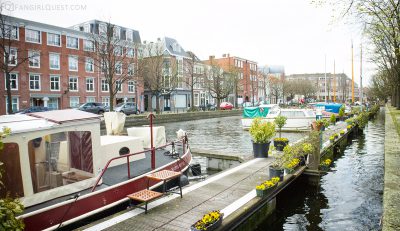 Our starting point. The weather wasn’t the best for photos, but the cruise itself was still quite beautiful! 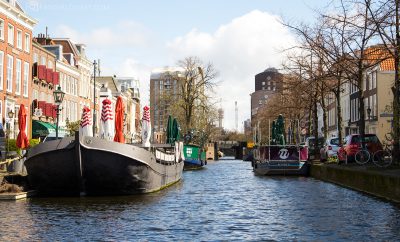 Boats, houses, parks, water… and all so pretty! 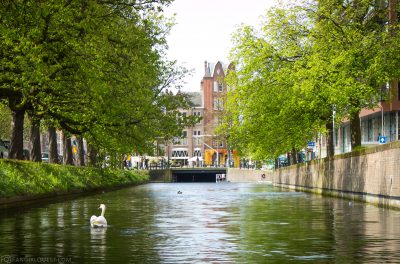 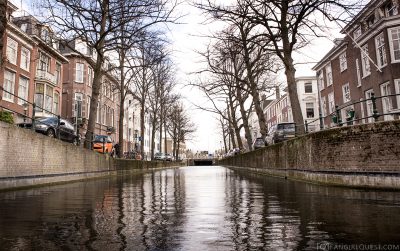 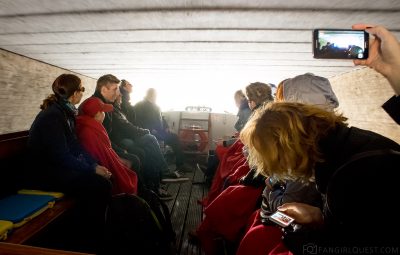 Duck! Many of the bridges along the canal cruise are a very tight fit…

After the cruise we headed back to the hotel to get all dolled up for the evening and for good reason: when the birthday party is being held in the ball room of the fascinating Escher Museum and the theme is royalty, you have to bring your a-game and of course a crown!

While there’s some quite entertaining footage and pictures of the evening, they might be best saved for friends and family only. We’ll just leave you with this one selfie that was taken before the party got too wild. It was an amazing night, thanks to J&N for having us! 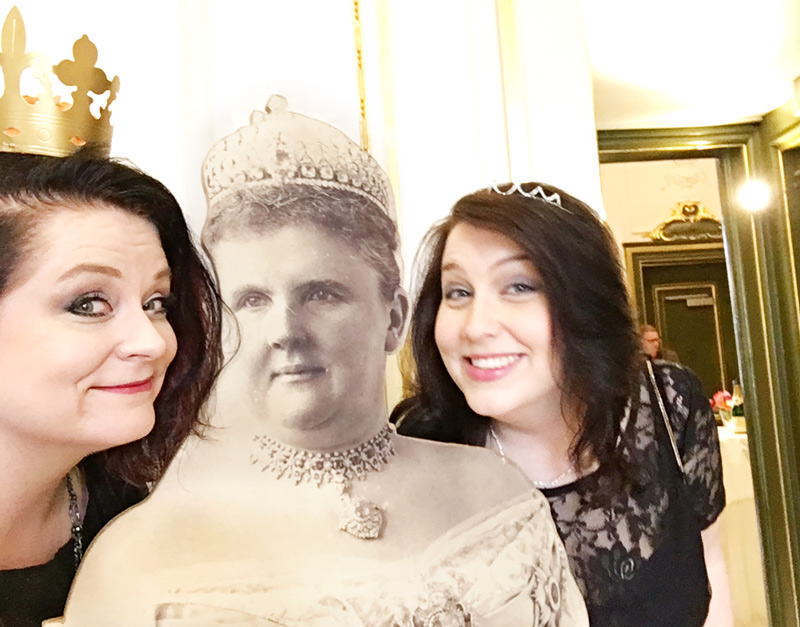 A bunch of royal ladies partying at Escher Museum

On our last day in The Hague we still managed to squeeze in some touristing, mainly filming locations. The Hague City Hall played the role of Interpol HQ in Ocean’s Twelve and we were hoping to soak in the atmosphere of the movie. Sadly the City Hall was closed as we were there on a weekend, so we had to settle for admiring the impressive architecture from the outside.

Across the street from the City Hall we to quick peek at the beautiful Nieuve Kerk. Built in the 17th century, today the church is home to the Redeemer International Church. 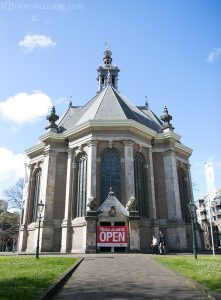 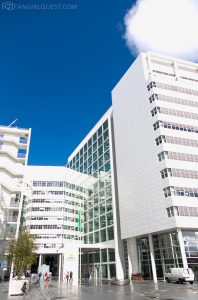 After checking out the City Hall and Nieuve Kerk, we hopped on tram and headed to the Peace Palace (Vredespaleis) that is often referred to as “the seat of international law” as it is the home to the International Court of Justice, the principal judicial body of the United Nations. The building can only be accessed by attending a guided tour, so if you plan on visiting the place, make sure to book in advance. The security is very strict, a detail that puzzled Tiia as she only later on discovered what the purpose of the place was. She plans on doing a little more research in advance the next time. You can however access the exhibition in the lobby and the beautiful Wish Tree in the courtyard that is filled with hopes and prayers of peace. 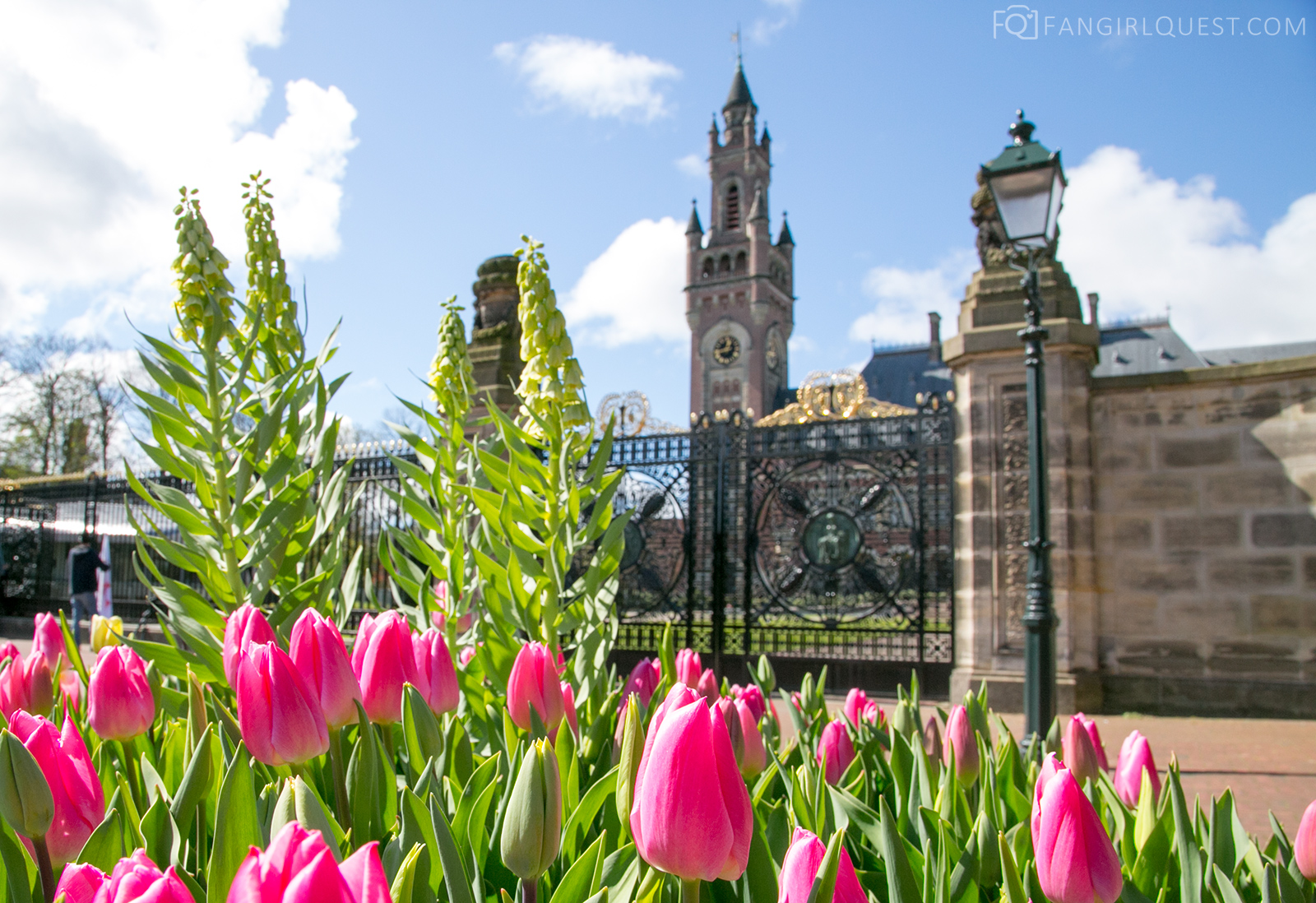 Spring – not a bad time to visit Holland! 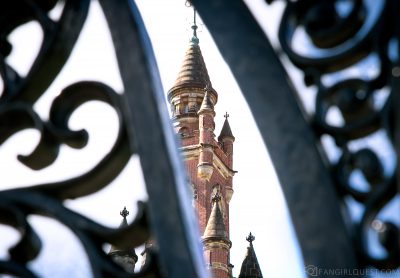 A palace lurking behind the gates 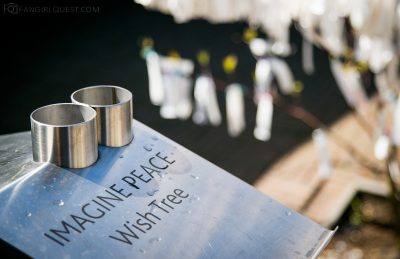 The Wishing Tree outside the Peace Palace in The Hague 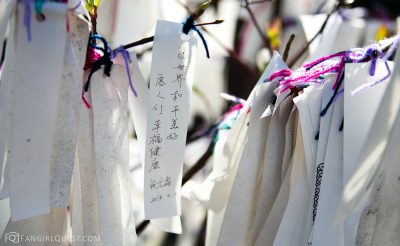 A note left by someone visiting The Wishing Tree 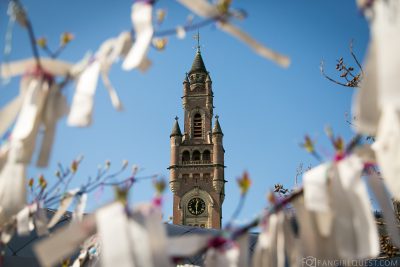 The Peace Palace seen from the Wishing Tree

Luckily not getting to the inside of the building didn’t stop us from sceneframing The Amazing Race, as you can see from these results! 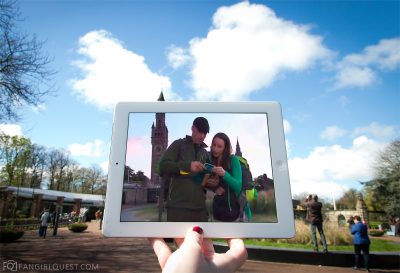 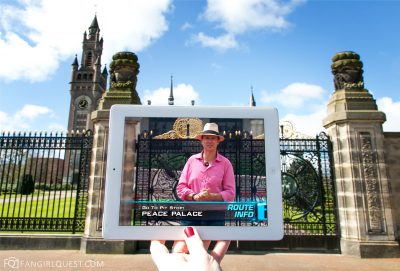 The Peace Palace served as the 7th pit stop on season 27 (!) of The Amazing Race. 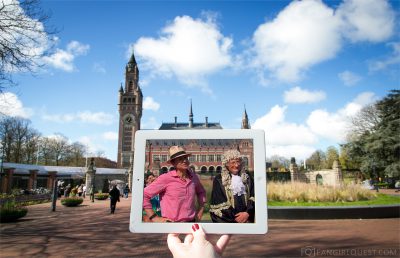 The host of The Amazing Race Phil Keoghan awaits competitors with a representative of The Hague. 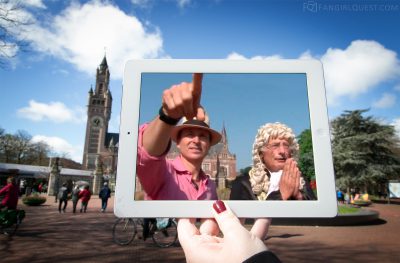