SPOILER warning: This post covers the show’s locations up until the end of season 2 so there may be spoilers. You have been warned!

Supergirl follows the adventures of Kara Danvers, cousin to the famous Clark Kent aka Superman, as she struggles to combine her ordinary life of being a reporter with her very extraordinary role as a superhero. I first started watching it just for sceneframing purposes once we knew we’d be going back to Vancouver, but it quickly became my favorite of the CW’s superhero shows.

Starring Melissa Benoist as Kara and Chyler Leigh, David Harewood, Mehcad Brooks, Katie McGrath and Jeremy Jordan as her ragtag group of friends and family, Supergirl manages to be warm-hearted without being sappy. The main characters all quickly entered the “protect them at all costs”category for me and the relationships portrayed between them is easily the best part of the show.

Where is Supergirl filmed?

The show’s first season was filmed in and around Los Angeles, but from its second season onward the production has resided in Vancouver, the same neighborhood where CW’s other superhero shows Arrow, The Flash and Legends of Tomorrow are filmed.

When visiting Vancouver, the biggest problem is narrowing down the number of filming locations to see. There are just so many! Most of the locations we’ve picked for this guide can be found in Downtown Vancouver.

Located in Library Square in downtown Vancouver, the Vancouver Public Library’s Central Branch is hard to miss. The impressive elliptical facade of the building can be seen in a number of shows and movies and is pretty easy to spot.

Scene: It is here that Lena Luthor hosts a gala and invites both Kara and Supergirl to attend. The gala is actually a trap for the criminals who have been terrorizing the city with alien weaponry. In the same episode Alex & Maggie investigate a crime scene outside of the library. 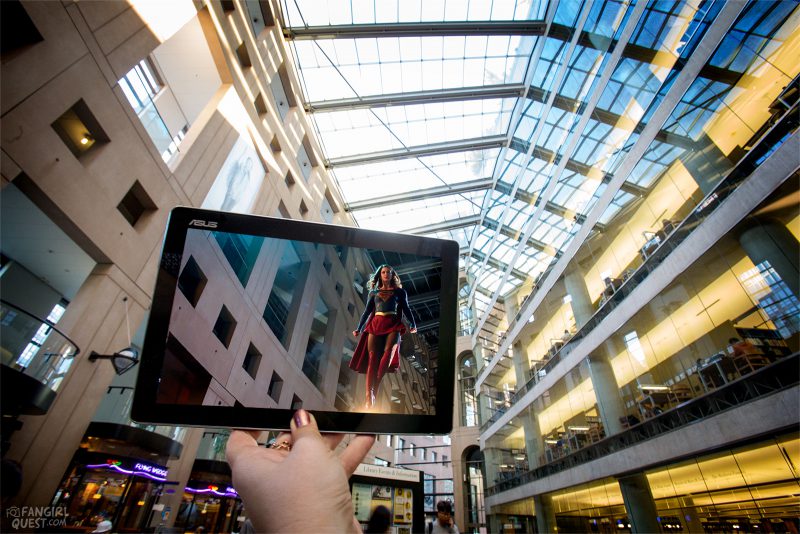 Just off of Vancouver Central Library, this stretch of Homer Street has been used in both Supergirl and The Flash.

Scene: As murderous drones are wreaking havoc on the city, Superman saves a family on the street 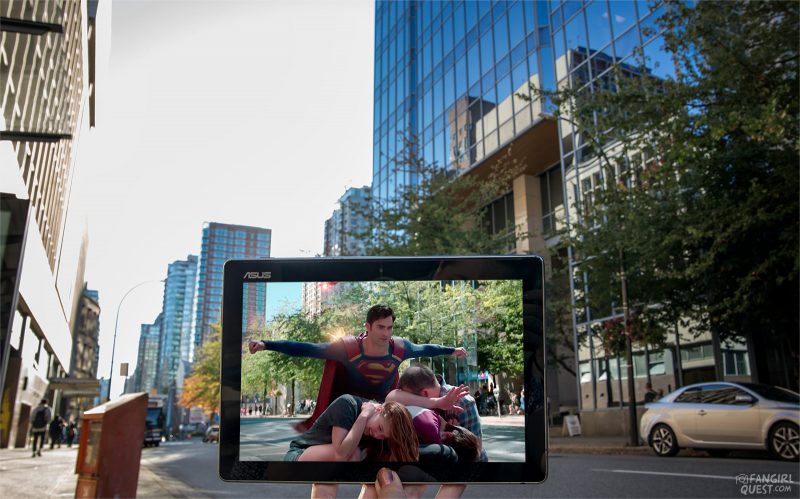 This building was used as the exterior for L Corp, the headquarters of Lena Luthor’s renamed company.

Scene: Kara and Clark Kent have a heart to heart on the street outside the building after visiting Lena. 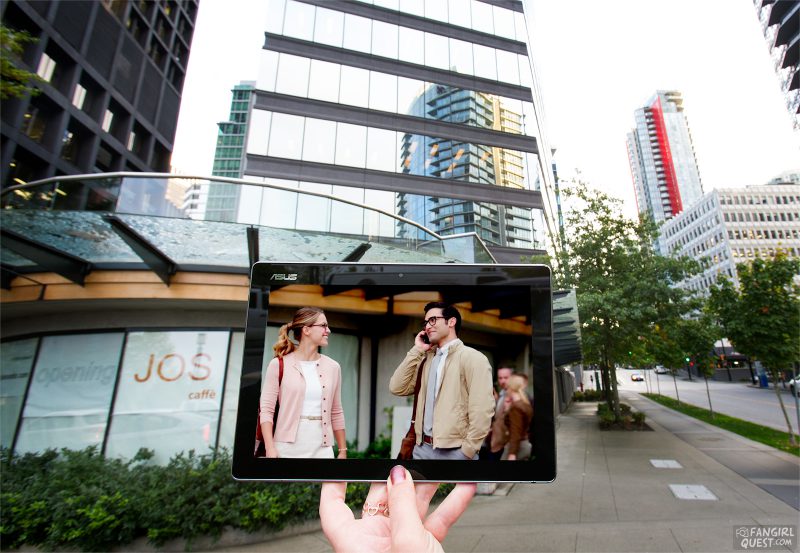 Just outside of the L Corp building, Harbour Green park is the longest continuous park on the waterfront in Vancouver. With direct access to the Vancouver Seawall, it’s a perfect place for escaping the buzz of downtown and cooling off by the water.

Scene: Lena Luthor announces the rebranding of her company to L Corp, only to be interrupted by the attack of an assassin. 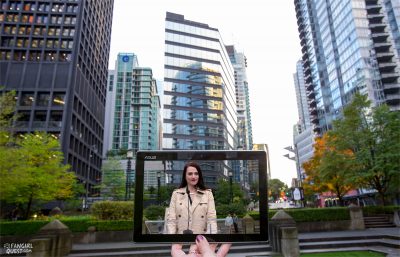 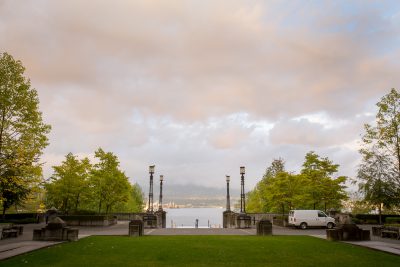 At 152 metres above sea level, Queen Elizabeth Park is the highest point in Vancouver, and inside the park is Bloedel Conservatory. The domed conservatory is home to more than 120 exotic birds and 500 species of plants and flowers. Thanks to its futuristic appearance, it’s also a popular filming location.

Scene: The president is hosting a press conference to sign the Alien Amnesty Act but as often happens in Supergirl, the event is interrupted by an attack. We were especially happy we got to frame this scene as President Marsdin is played by none other than Lynda Carter, the original Wonder Woman! 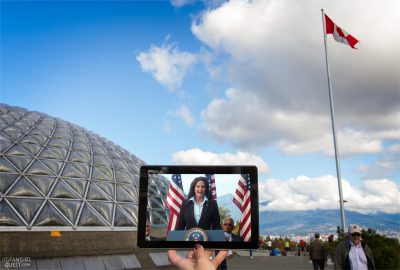 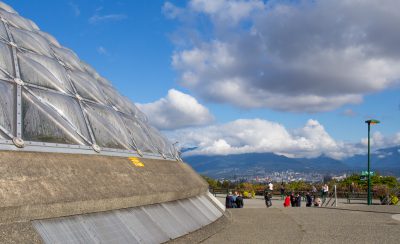 Bloedel Conservatory in Queen Elizabeth Park is home to hundreds of species of exotic birds and plants.

The MNP Tower in downtown Vancouver plays the part of West National City Bank. This is one of the locations that is just a short walk from the waterfront and the attractions of Canada Place.

Scene: Kara and James try to stop some bank robbers but their efforts are thwarted when the perps whip out some alien technology… 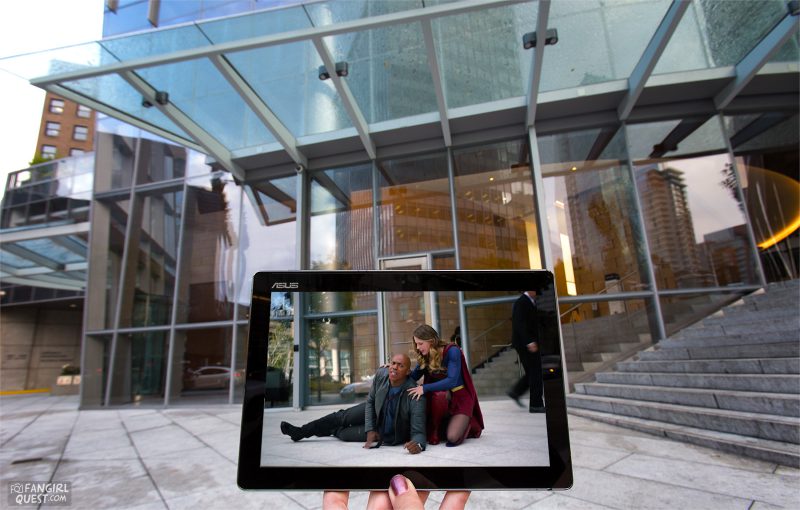 Seawall (between Strathmore and Homer)

The Vancouver Seawall is one of the city’s top attractions and it’s easy to see why. 28 kilometers of paved walkway stretches from the Vancouver Convention Centre on the north side of the city all the way to Kitsilano. It’s mostly flat so it’s easy to walk and offers beautiful views of both the city and the ocean and mountains surrounding it.

Scene: It’s on the southside of the city, just opposite Granville Island, that Alex and Kara take a walk on the Seawall. It’s here that Alex comes out to Kara in an emotional moment between the sisters. 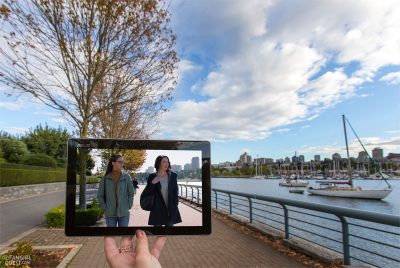 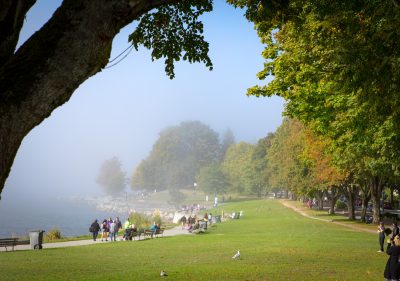 The Vancouver Seawall stretches all around Stanley Park.

When picking filming locations to feature, we try to find places that are also interesting on their own. This, however, is not one of them. Sometimes a location is just conveniently next to other places and features a character we want to make sure is included in our sceneframes. Sometimes that leads us to less than appealing alleyways like this one.

Scene: This time the character we wanted to sceneframe was Chris Wood’s Mon-El, the Daxamite who has some trouble adjusting to the customs on earth. Responding to an alien attack, Kara finds Mon-El in the alley, roughing up another alien in a misguided attempt to use his powers for his own good. 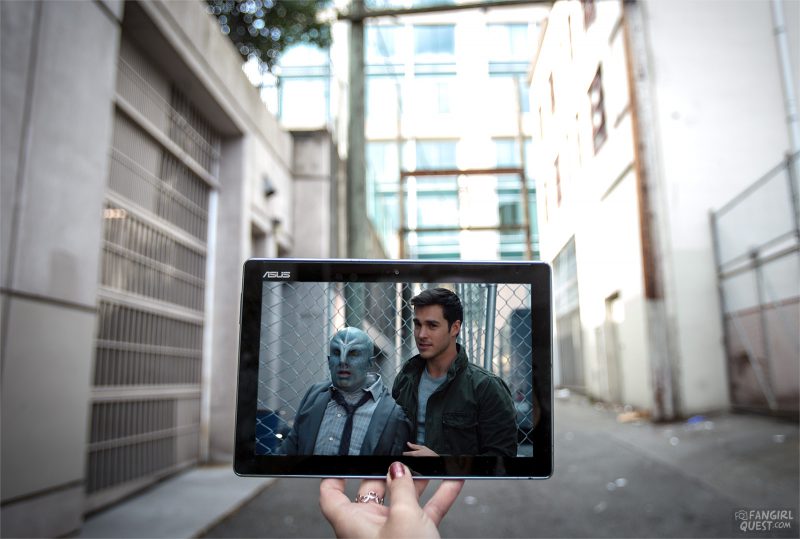 Supergirl filming location in Vancouver: an alley off Cambie Street

Hornby Plaza between West Hastings and West Cordova streets is a popular filming location. In addition to the plaza, Supergirl filmed some scenes next to it on West Hastings Street.

Scene: Parasite has reappeared to wreak havoc on the city. Kara and Mon-El arrive to stop the creature, only to discover that it was actually conjured up by Mr. Mxyzptlk, who shows up to “help”, dressed as a superhero. 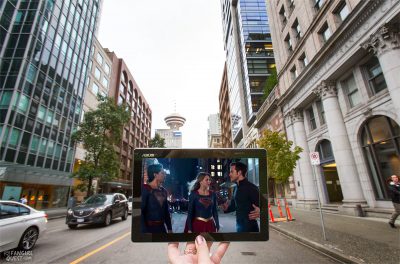 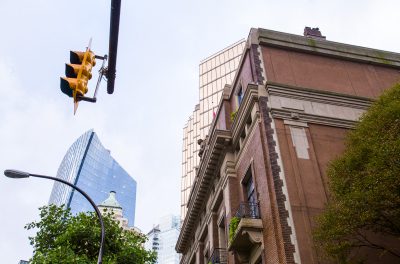 Just next to Hornby Plaza on West Hastings Street is also the legendary Vancouver Club.

One of the many small parks in Vancouver, Cathedral Square is an odd mix of modern design and concrete, contrasted with the beautiful old Holy Rosary Cathedral.  The Square itself is a bit on uneasy area, but worth the visit to see the church – and of course the filming location.

Scene: An alien with a laser eye-patch (yes, that’s a thing) is shooting everything in sight when Kara shows up to stop him in an intense duel of eye-lasers. 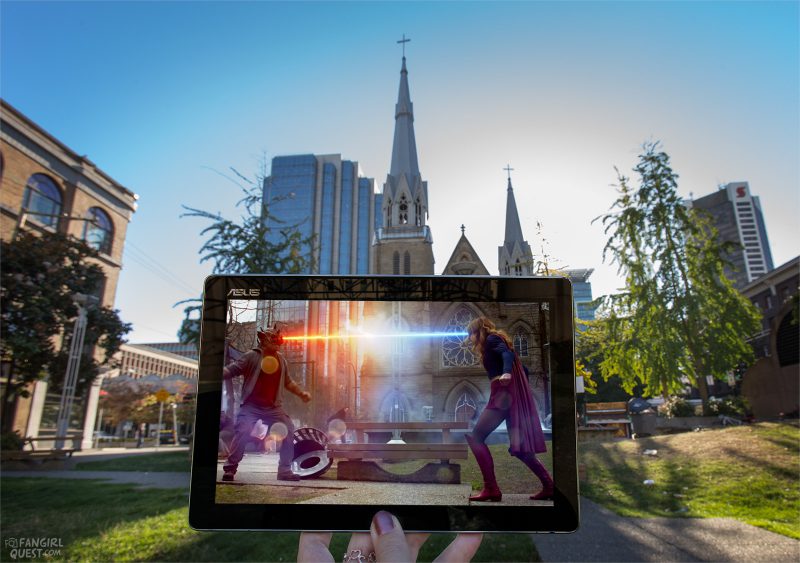 A shallow fountain in the shape of a massive leaf, Big Leaf Pond is hard to spot from unless you’re right next to it. It lights up at night to highlight the leaf’s outline to create a dramatic effect.

Scene: Alex and Maggie are leaving yoga and joking about having turned into one of those annoyingly happy couples, when they run into Maggie’s ex, one that she didn’t part from on the best of terms. 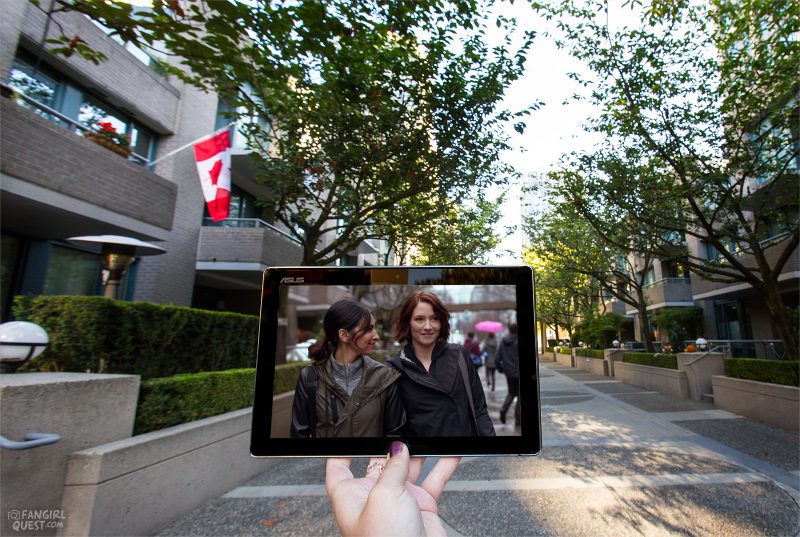 Just outside of International Village Mall, one of Vancouver’s oddities, is Keefer Place. The plaza at the end of the street has a statue of the globe with the words “International Village”, a symbol for the Mall. Turns out, we couldn’t actually frame the scene filmed here because the angle was just wrong – the production had a much wider lense and possible a crane to get up higher for the shot.

Scene: It is on the plaza with the globe statue that the Daxamite forces descend on Earth to begin their attack.  A giant reflection of Rhea, the Daxamite queen played by Teri Hatcher, appears above the tall buildings flanking the plaza as she addresses the citizens of Earth. 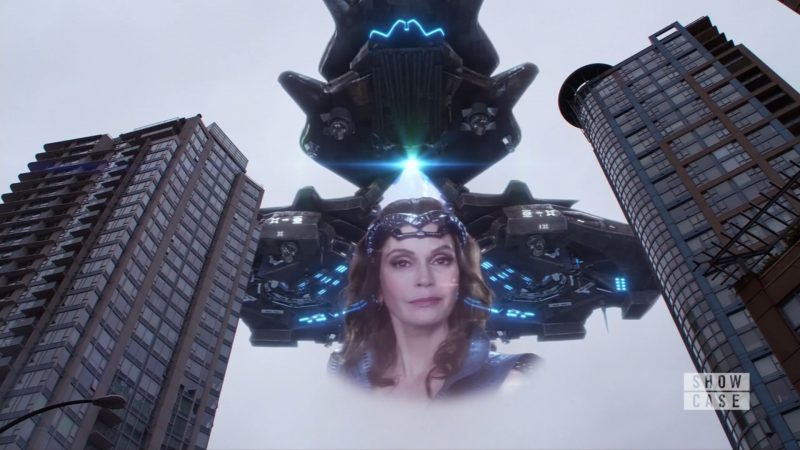