How To Download iCloud Photos to PC – 3 Easy Steps!

A Trainspotting Filming Location That Serves Delicious Lunch In Glasgow

The Trainspotting gang at the pub just before the fight scene.

A couple of weeks ago I flew to the UK once again, this time to see our absolute favorite band Poets of the Fall live in London and Glasgow. Aside from visiting a few locations from Sherlock, Outlander and World War Z, me and our friend Essi found our way to this beautiful Trainspotting filming location. It also turned out to be a lovely place to have some lunch and a pint of beer. 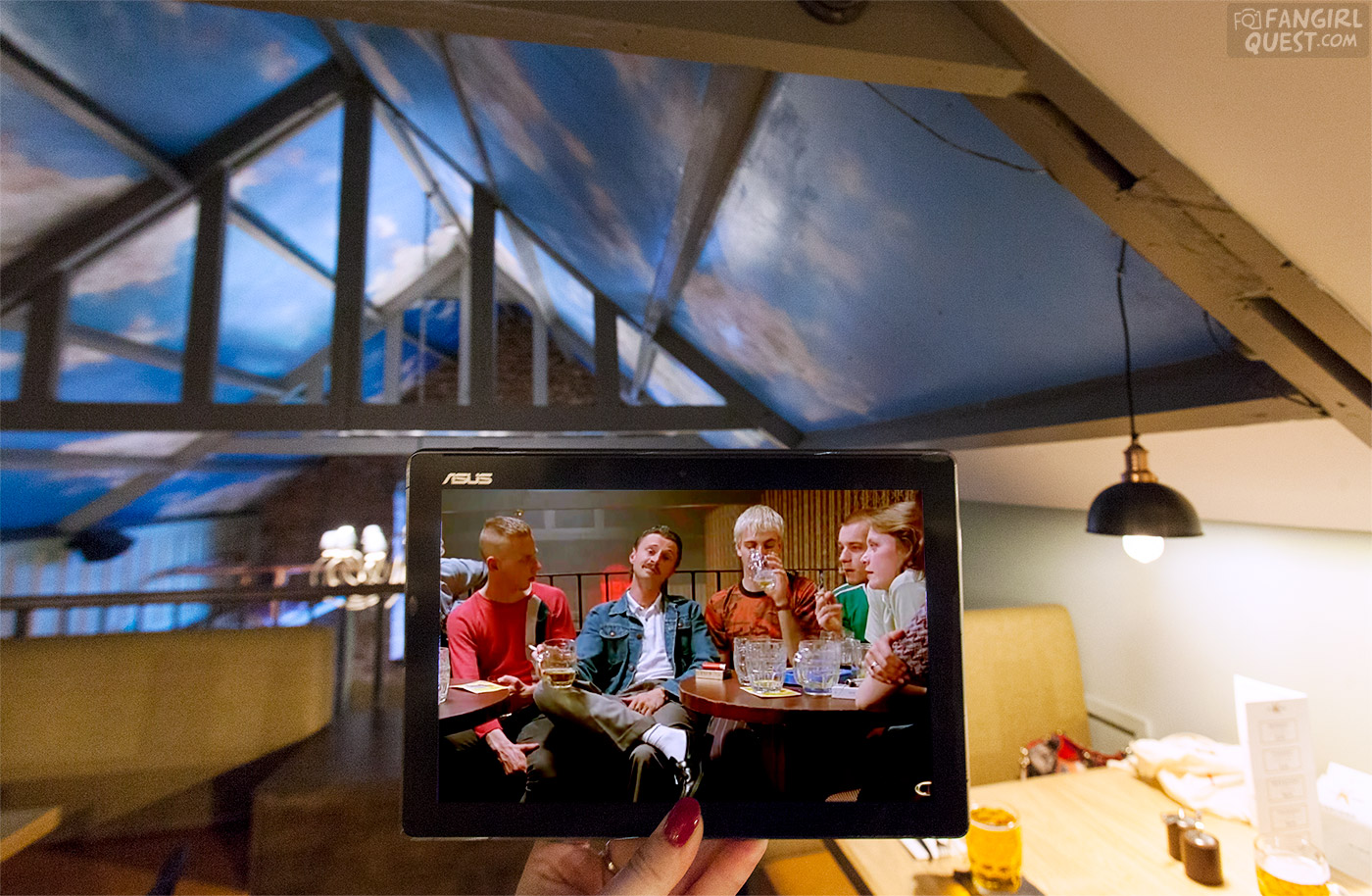 The Trainspotting gang at the pub just before the fight scene.

The reason we looked up this pub is, of course, the legendary pub fight scene from Trainspotting (1996). As many of you know, the sequel to this brilliant & funny film (also directed by Mr. Danny Boyle) just premiered in the UK, so it’s a good time to re-watch the original like we plan to do! We’ll still have to wait for T2 a couple of weeks here in Finland, but after that, we’ll definitely go and see it. 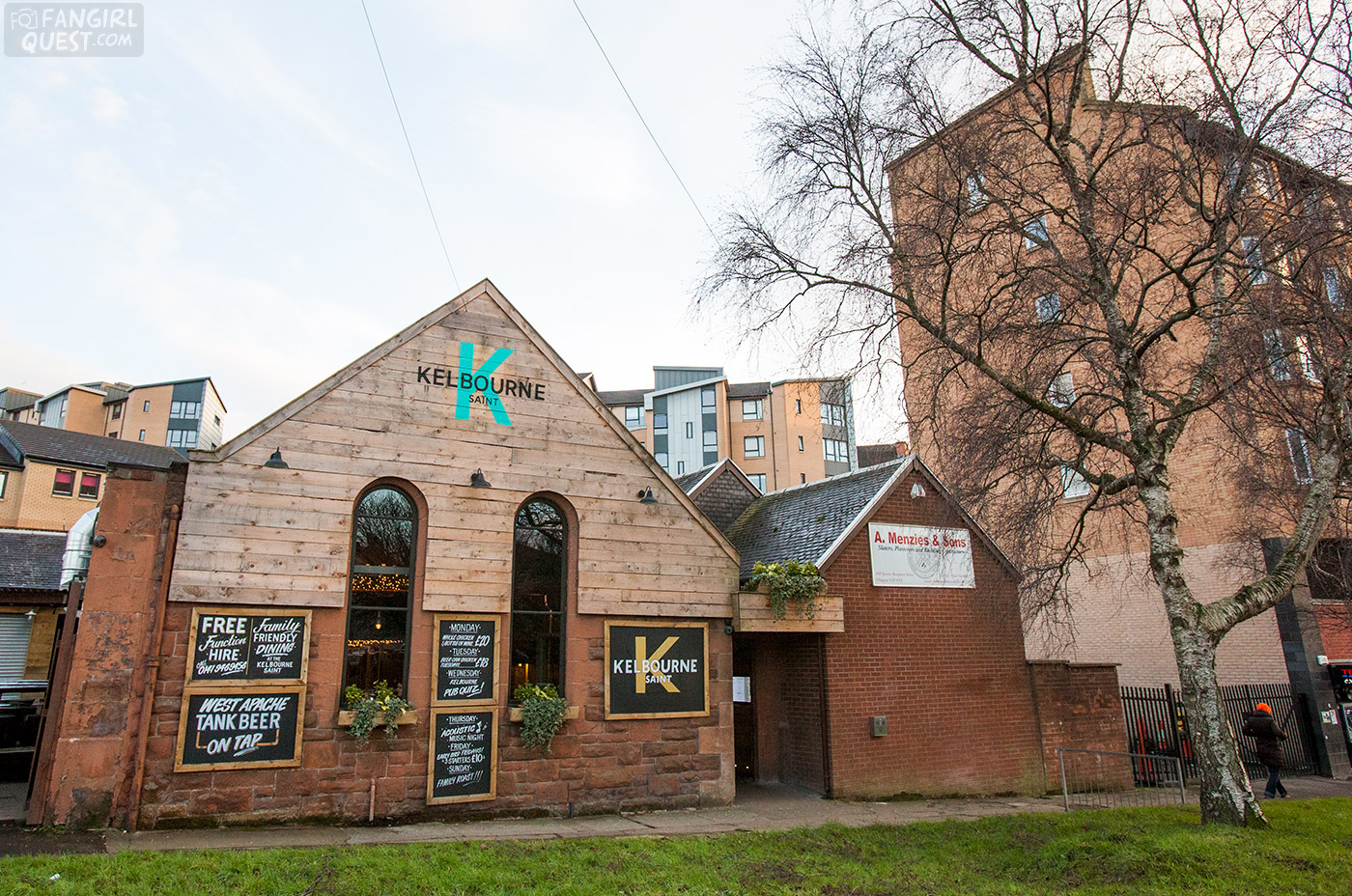 Knowing that the film premiered two decades ago, we didn’t expect too much of similarities in the interior of the restaurant. However, we were in for a happy surprise: the same balcony is still there and you can practically sit right where the Trainspotting bunch once sat (as we did!).

Almost everything else has changed: the high church ceiling and windows are still there, but the walls, tables, all of it, are now nice, modern and clean.

We watched the scene before our arrival to the pub that day and had *massive* giggles over it… and the fact we got to sit in the same spot holding similar pints!

I was so excited to be there and so busy with aligning the tablet with the key spots, that I actually forgot to take any proper photos of the place without the tablet!! So I had to go and steal this one from the Kelbourne Saint’s lovely Facebook page. 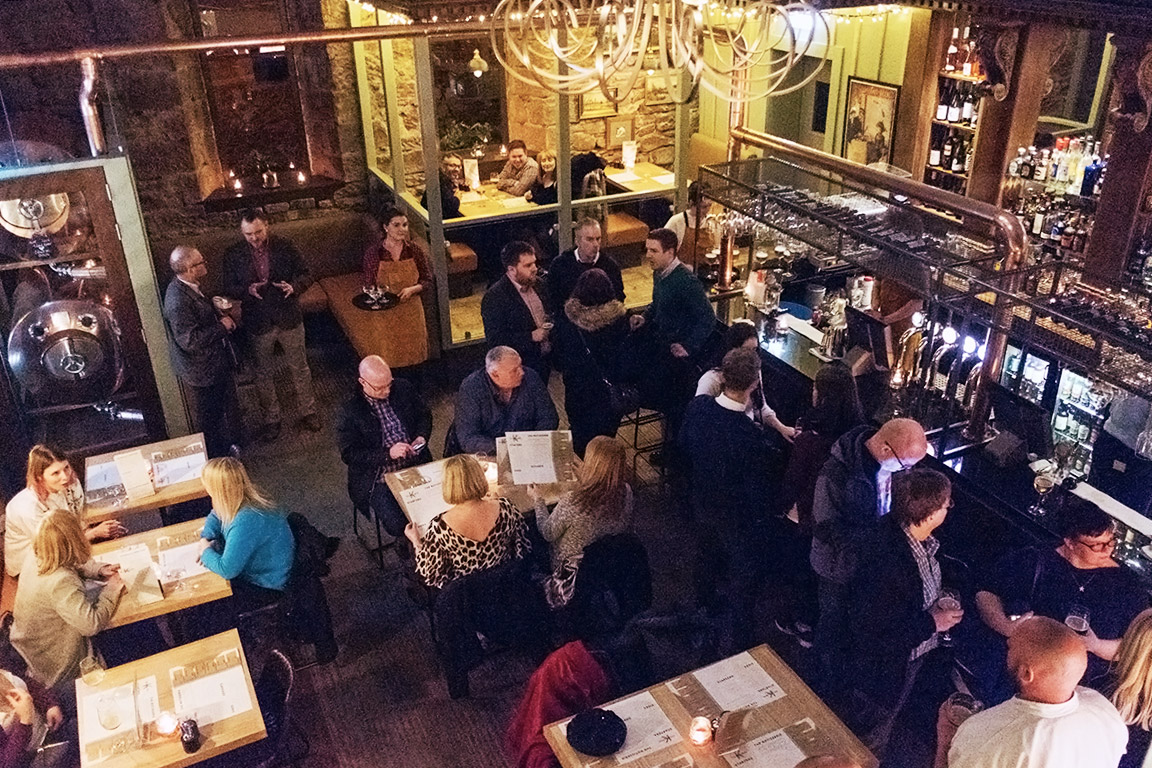 The Kelbourne Saint: A lovely pub with delicious food.

One thing I did not forget to photograph is the food. The heavenly food. The Kelbourne Saint is known for their rotisserie chicken and delicious sides, so we went for the chicken & mash combination. And it was sooo so good!

For dessert? Pie. We shared this incredible melt-in-your-mouth Apple & Blackberry Crumble with thick, creamy vanilla ice cream between us. I kid you not, we still talk about that pie two weeks later and have regrets about not having one whole thing for each. 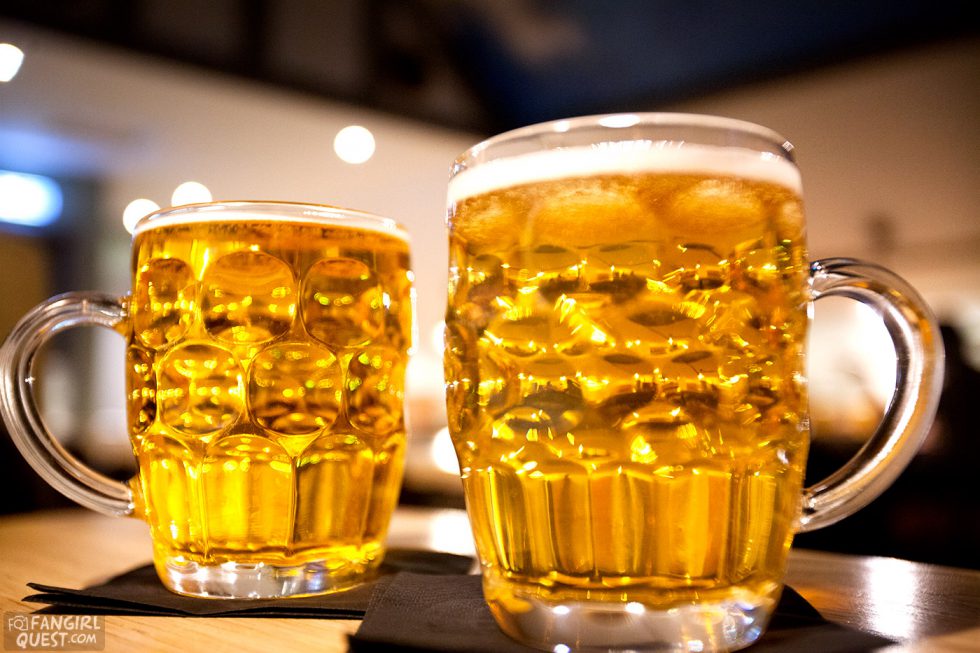 We were ridiculously happy to get similar pints to that of Begbie. 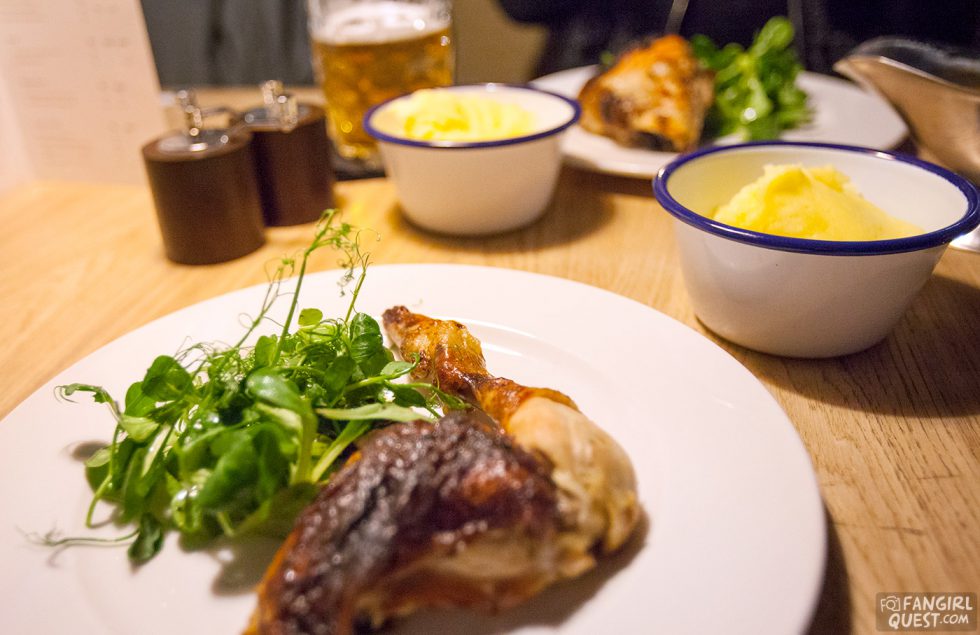 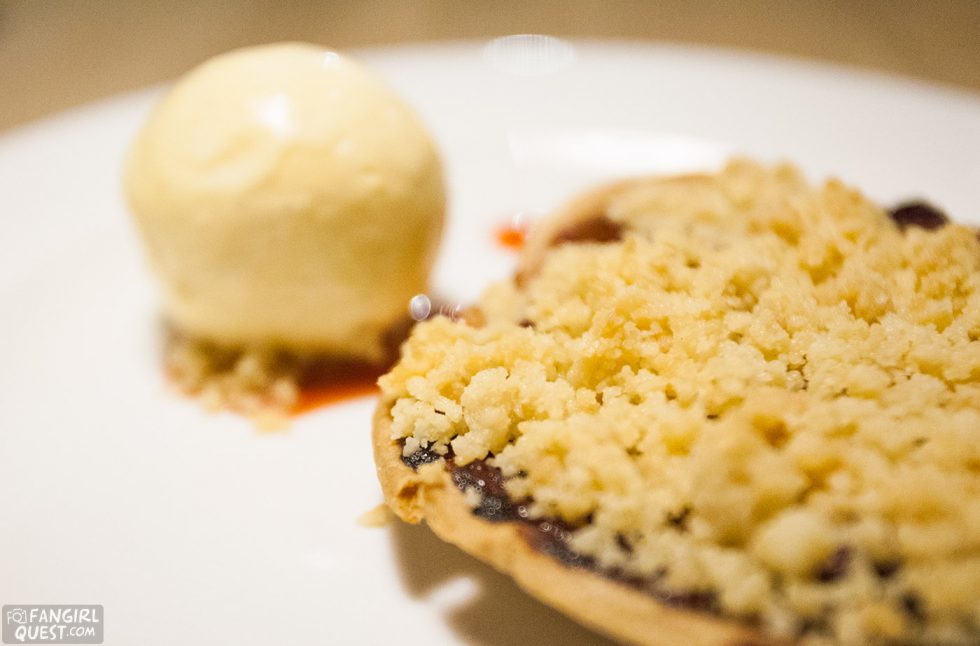 Our friendly waiter saw us taking the photo below, asked about it and we started chatting. Five minutes later he was back and all excited about our website, particularly the Boston filming location photos. Turned out, he’d grown up in Boston and loved seeing anything related to his old city.

Just in case he ends up reading this…. Hey! Thanks for making our day! We had some really good giggles :) 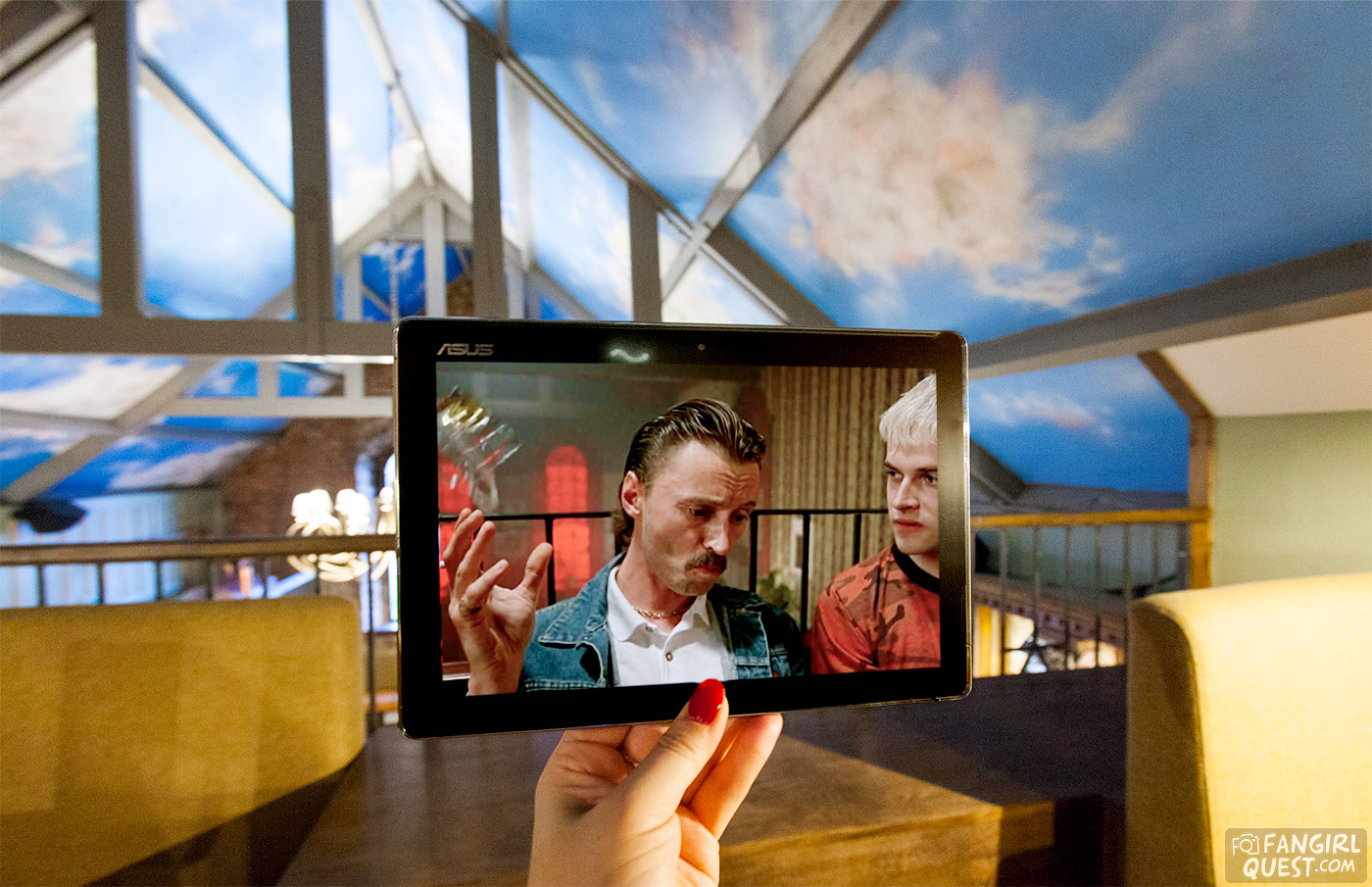 At first, we snapped a few selfies in front of the railing, but then things got a little out of hand and we ended up practically cosplaying Begbie and Sick Boy. I combed my hair back while Essi got all excited, combing her long, blonde hair up and front:

“Hey, I can totally do that hair!”

What followed was at least 10 minutes of loud giggles and making stupid faces, while trying to get the angle right. I think we did pretty well, aye? ? 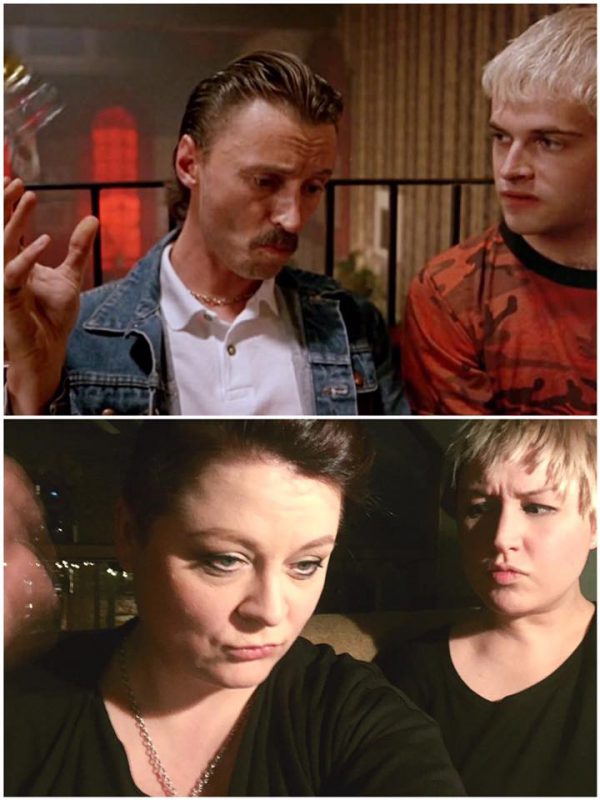 After finishing our meals and pints, and entertaining ourselves with all the Trainspotting fangirling, we had to practically rush out to make it to Poets of the Fall’s VIP meet & greet at the O2 ABC in city centre.

But before we left, I still had time to snap this one featuring Begbie’s friends watching the fight from above, looking pretty unimpressed. 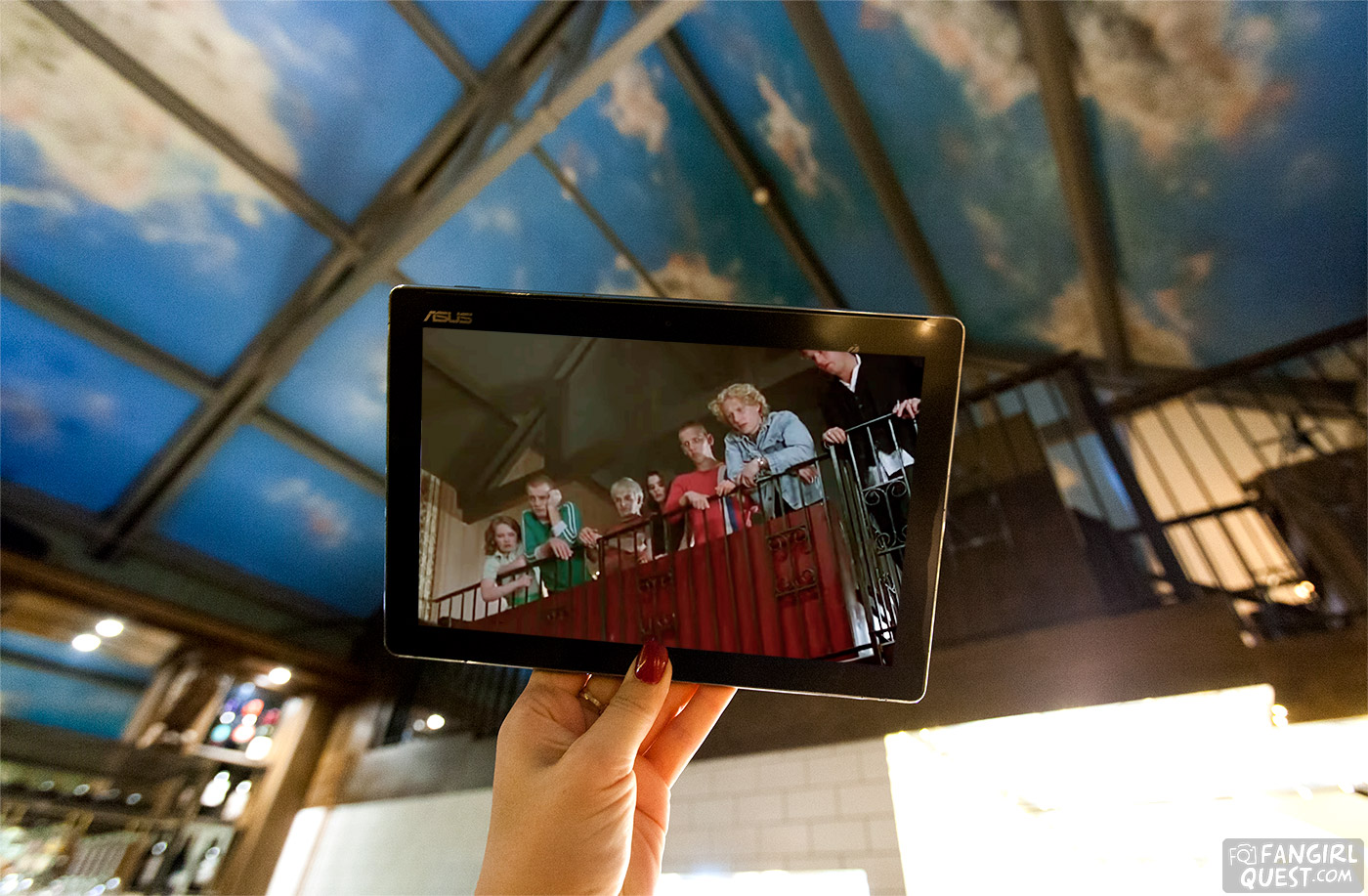 Begbie’s pals watch, unimpressed, as their friend causes a mayhem.