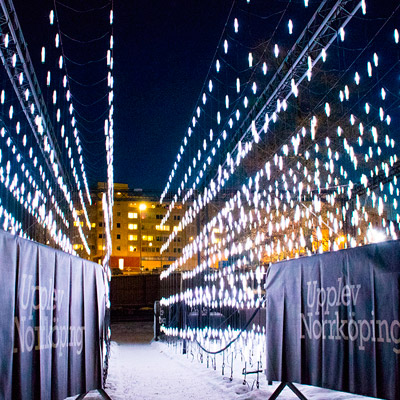 It’s easy for us Nordic countries to put up magnificent light festivals, as there’s plenty of darkness to fill with all sorts of colors and light. We took a walk around the Norrköping Light Festival in Sweden to capture the light on camera. What a fantastic subject – even in the dark.

During the whole trip to Sweden, I was test driving Canon’s mirrorless EOS M3. The size of it compared to my massive 5D! I found it a bit slower to use than 5D MKII, but one reason for that might be the fact that I’ve shot with 5D for over 6 years now and know it like the back of my hands. But still – the size matters in this case. I’m seriously considering getting a mirrorless camera to go with me on travels.

Anyway, here’s a photo report from the lovely Light Festival of Norrköping, Sweden. If you’re curious about the camera too, these photos will happily act as Canon M3 sample images.

During the darkest winter months of December and January, we need something that lights up our world. Something that gives warmth, creating attractiveness, confidence and builds pride. As a main artery Motala River is running through Norrkoping. The river in combination with light installations and various related events are what we call Norrkoping Light Festival.

We started our walk from the Museum of Work (Arbetets Museum) and made our way around from one installation to the next. It was very cold, but the walking kept us warm and the light art kept us inspired to walk all the way to the very last piece. 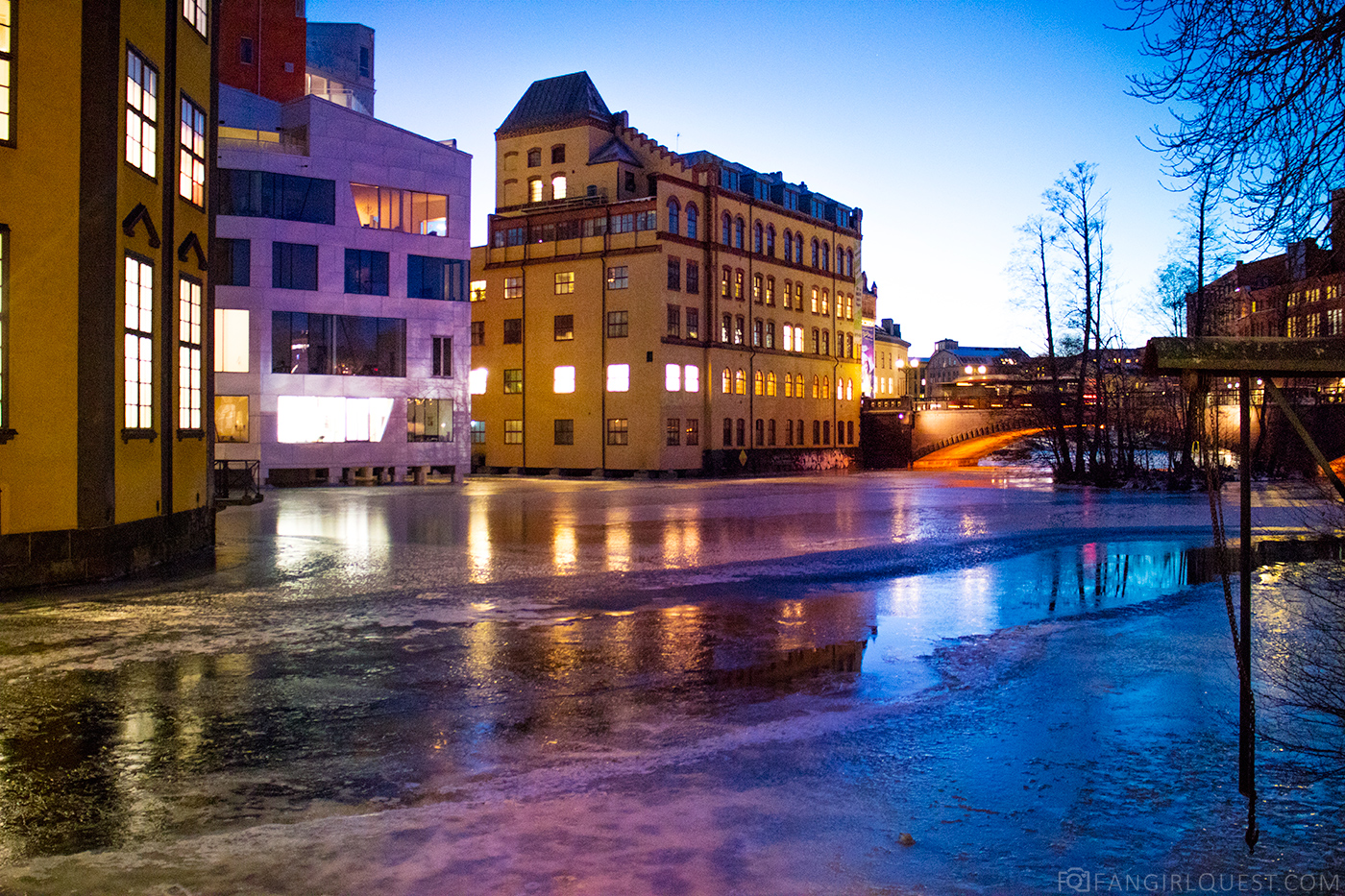 Our first stop was at a light circle, constantly changing in color. We witnessed a group singing together inside the circle when we arrived, and it only dawned on me afterwards that I could’ve captured it on video. 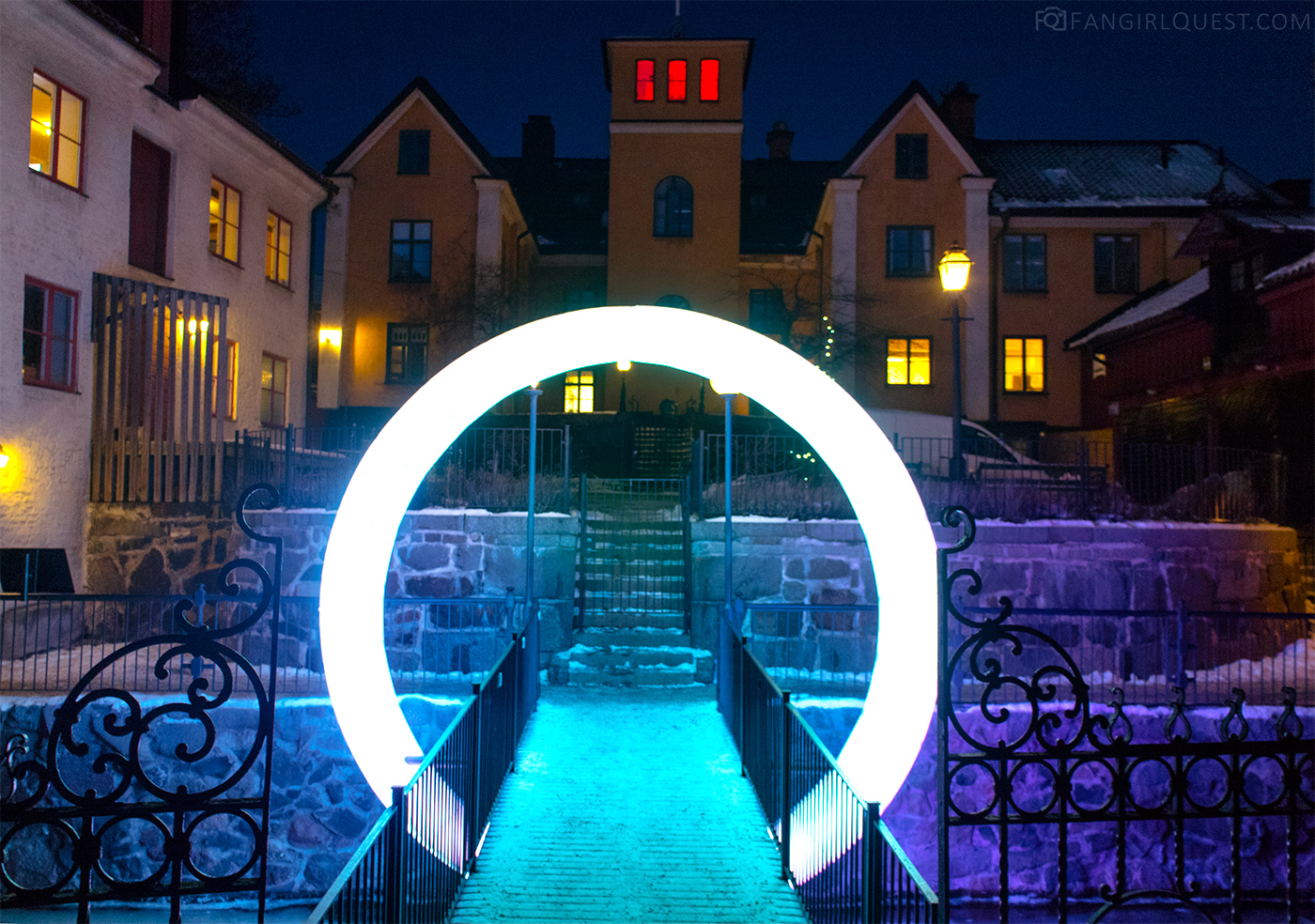 There’s water running all the way through the city of Norrköping, so not only you get to see the light, you’ll also often see the reflections of it in the water. A true dream for a photographer! 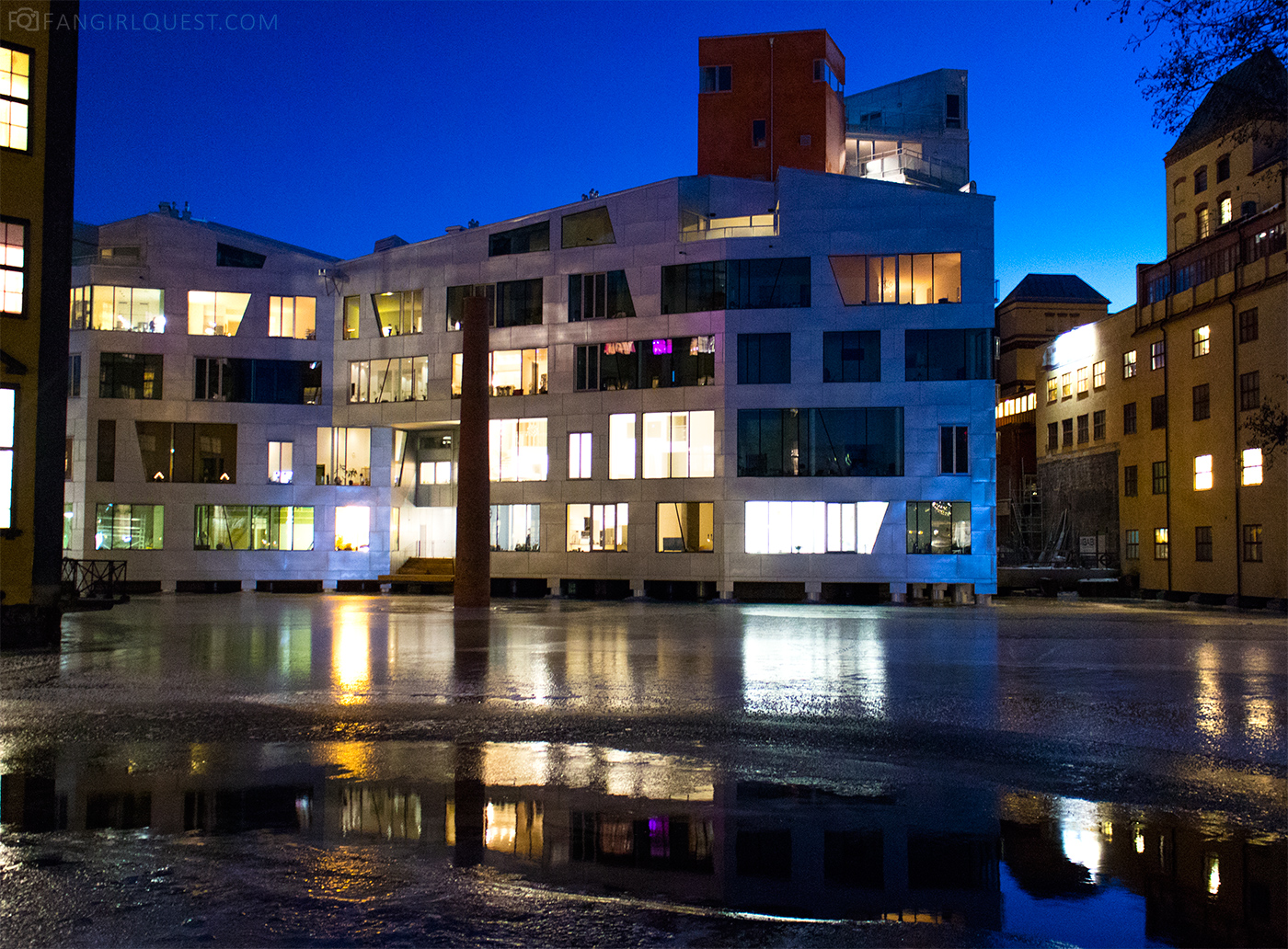 A modern apartment building near the Working Museum. So much light! 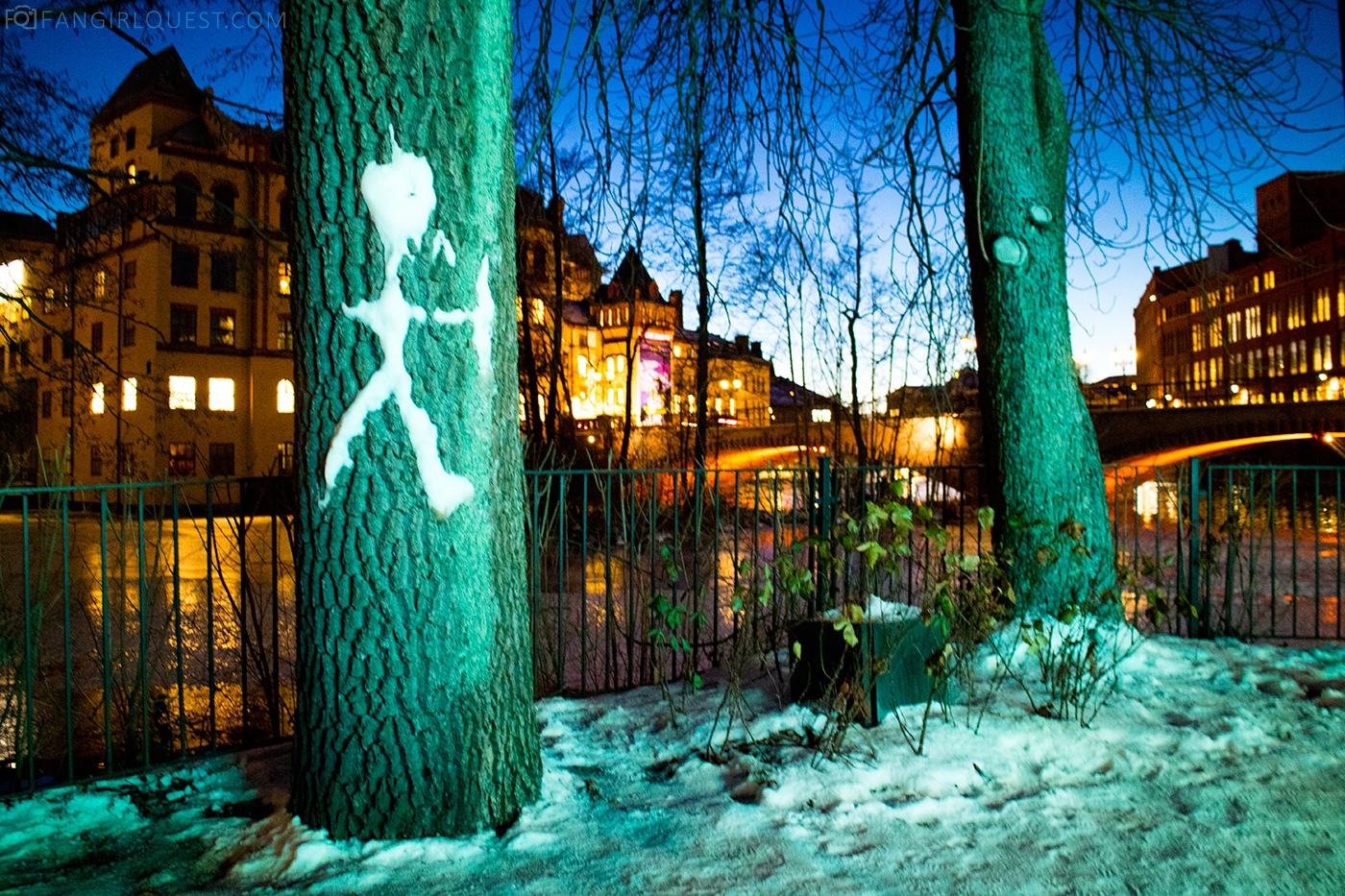 I spotted this symbol made out of snow on a tree. The green light made it even more mystical. 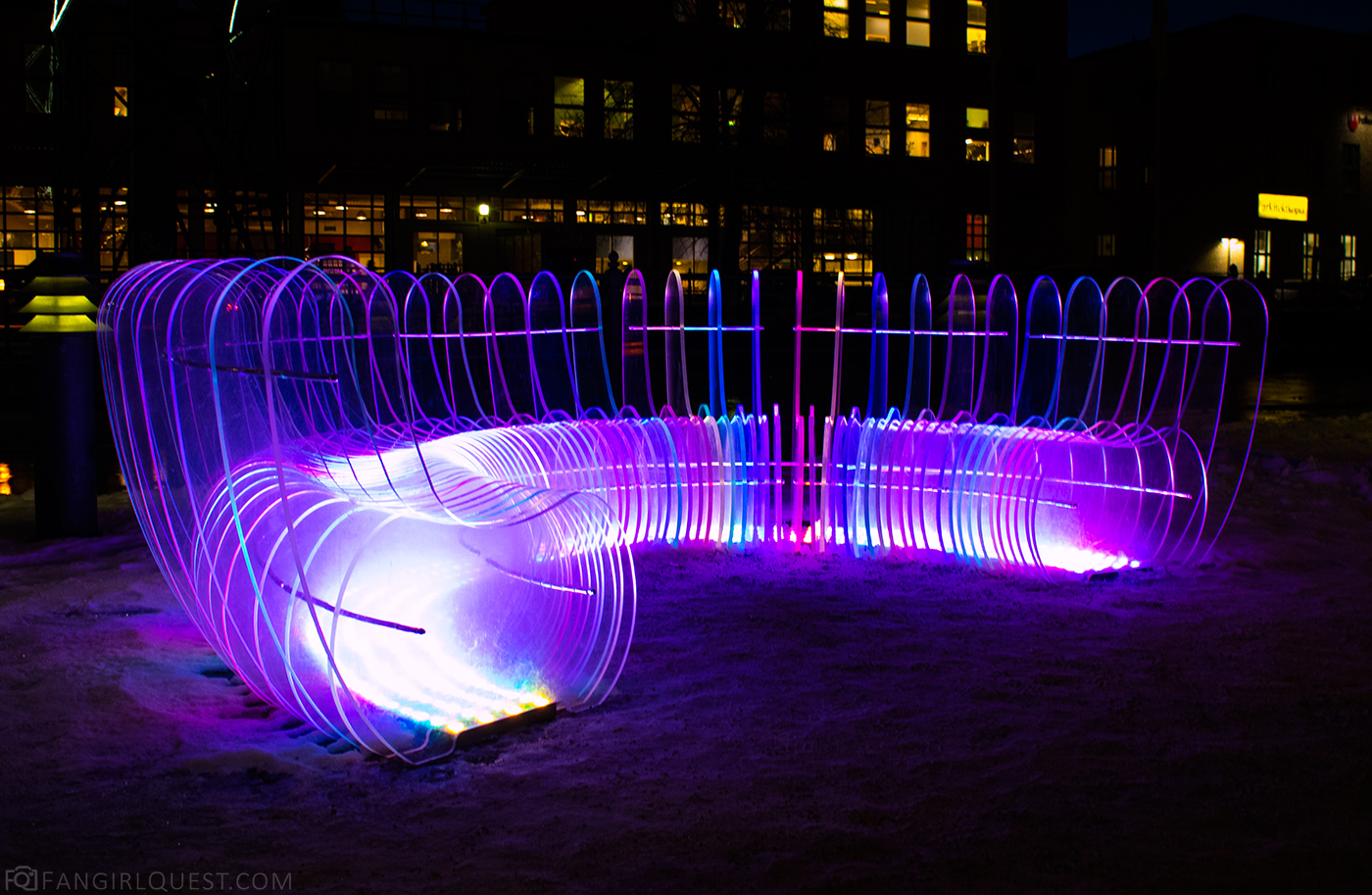 A bench built out of various pieces of plexiglass and of course, light. This too changed colours as we snapped photos and tried sitting on it. 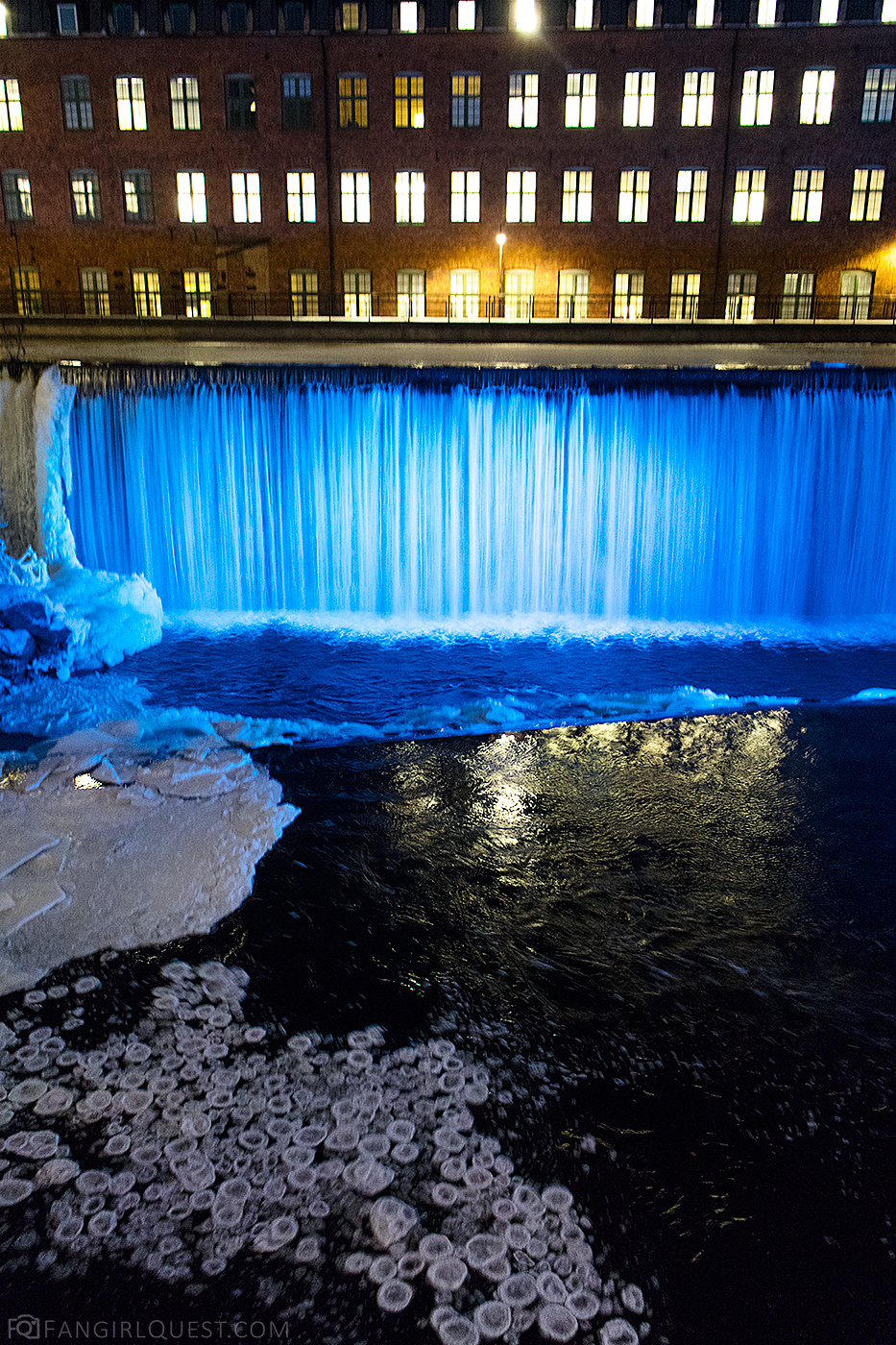 Even the water fall was lit up with changing colored lights.

The waterfall was so beautiful. The sound, the lights in the colors of the rainbow, these funny-looking tiny ice blocks floating on the surface..  Our guide said it reminds her of the Northern Lights. 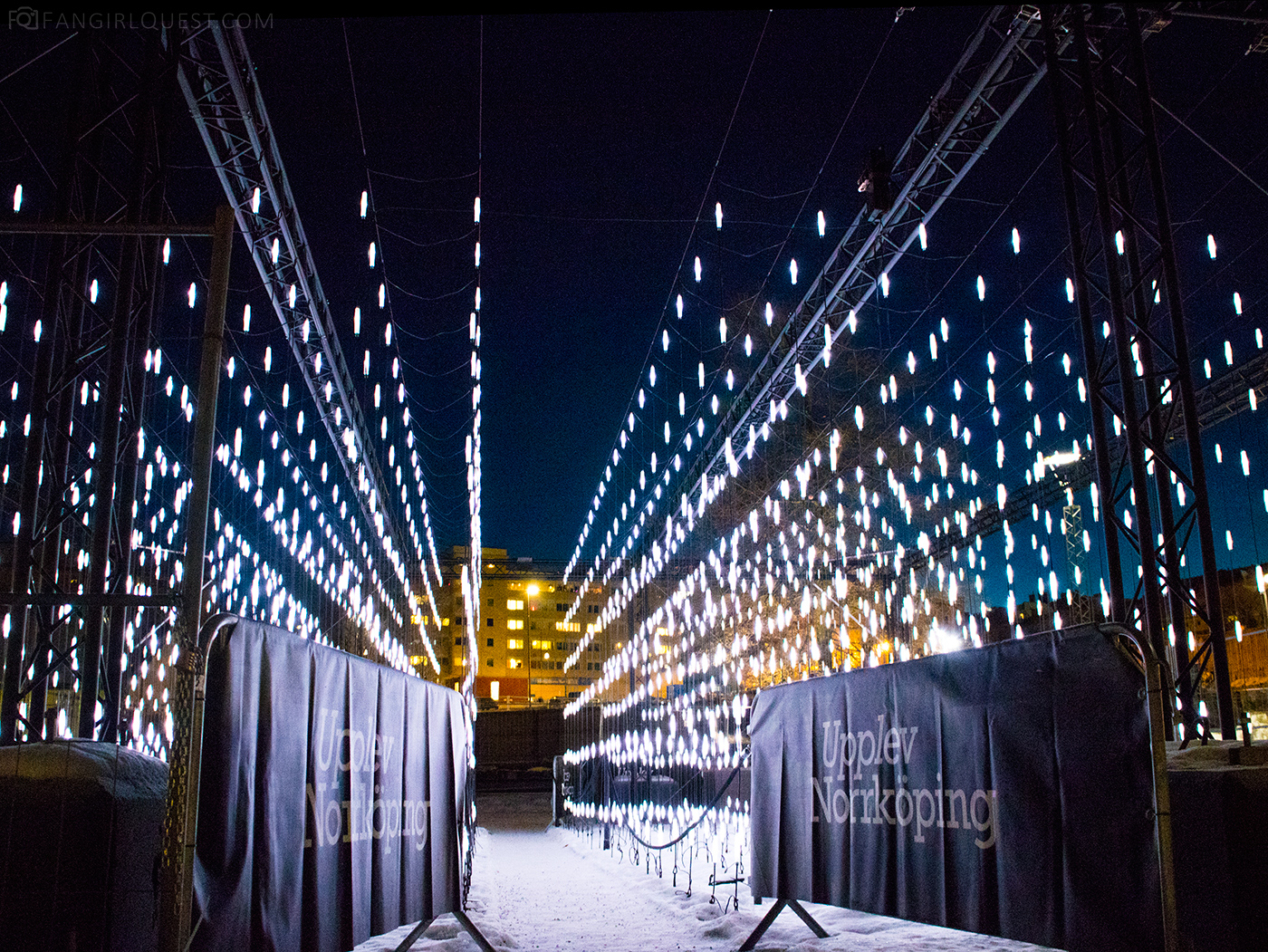 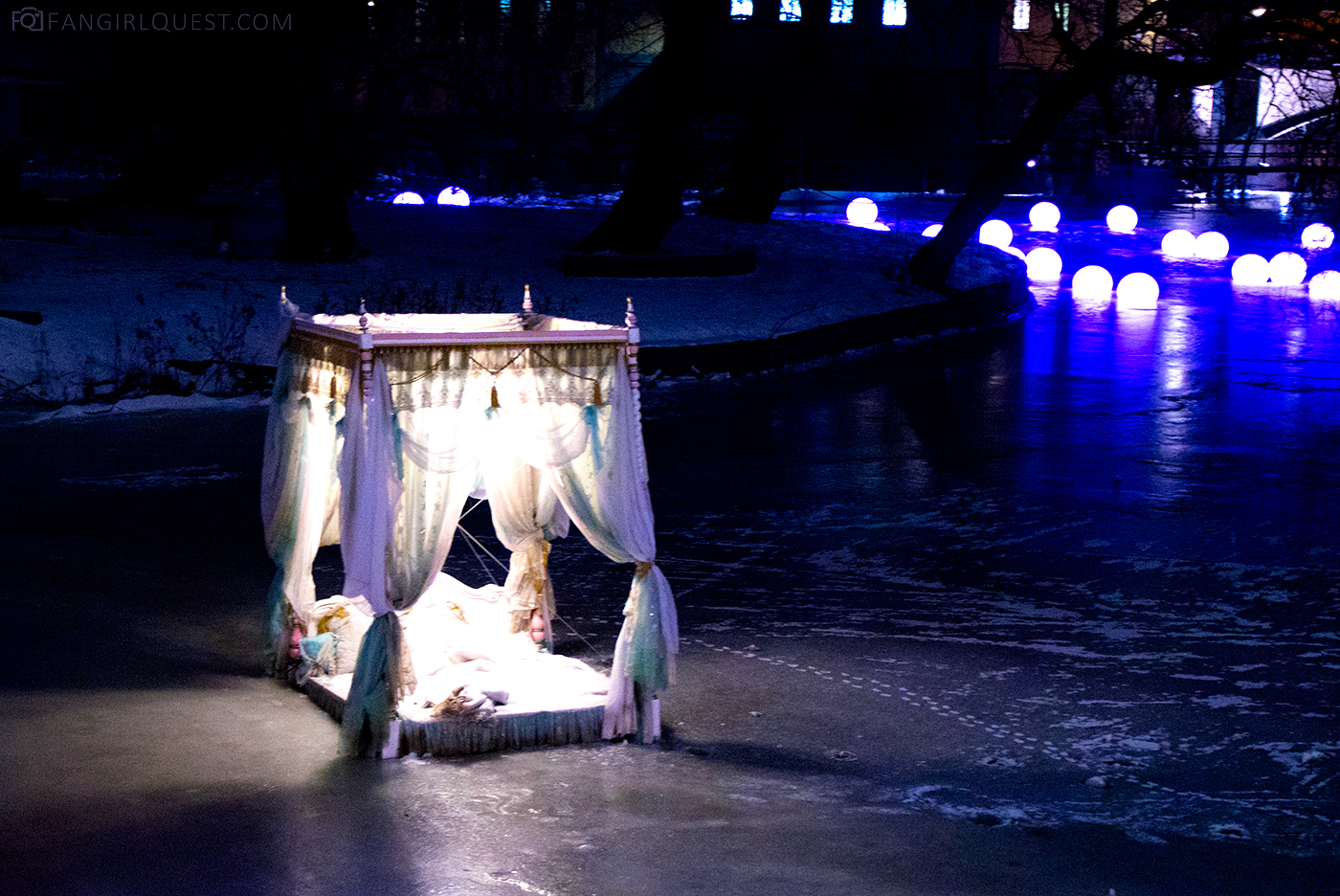 Yes indeed: there’s a fancy bed on the ice. We were joking about the fact that Finnish mothers who like to put their babies outside, even in the winter, to sleep in the fresh air. Eva from Una Idea, Un Viaje was horrified at first: “They leave them outside for the night?!”

(They don’t, actually. It’s just short naps under careful supervision and lots of blankets and clothes.) 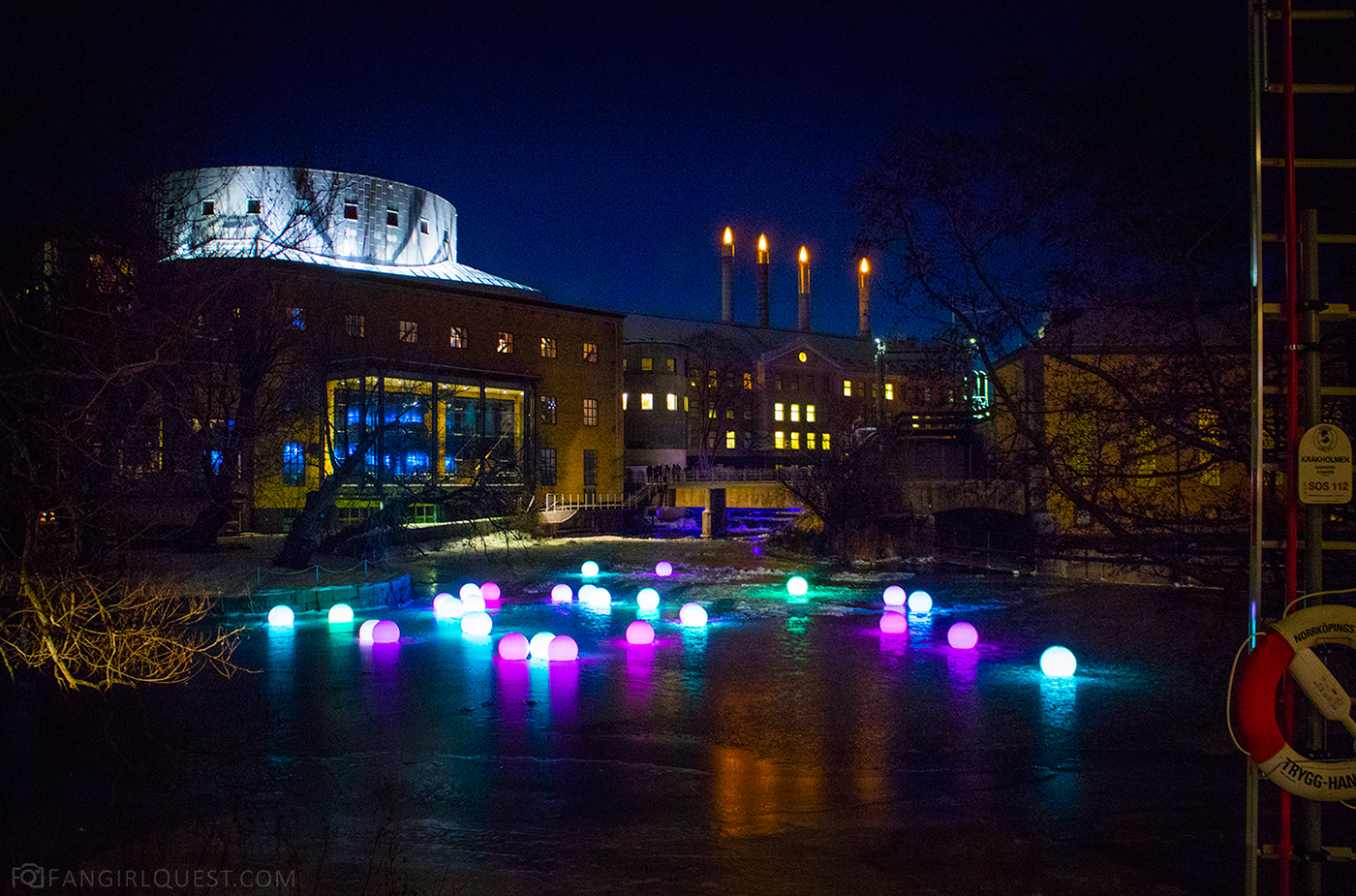 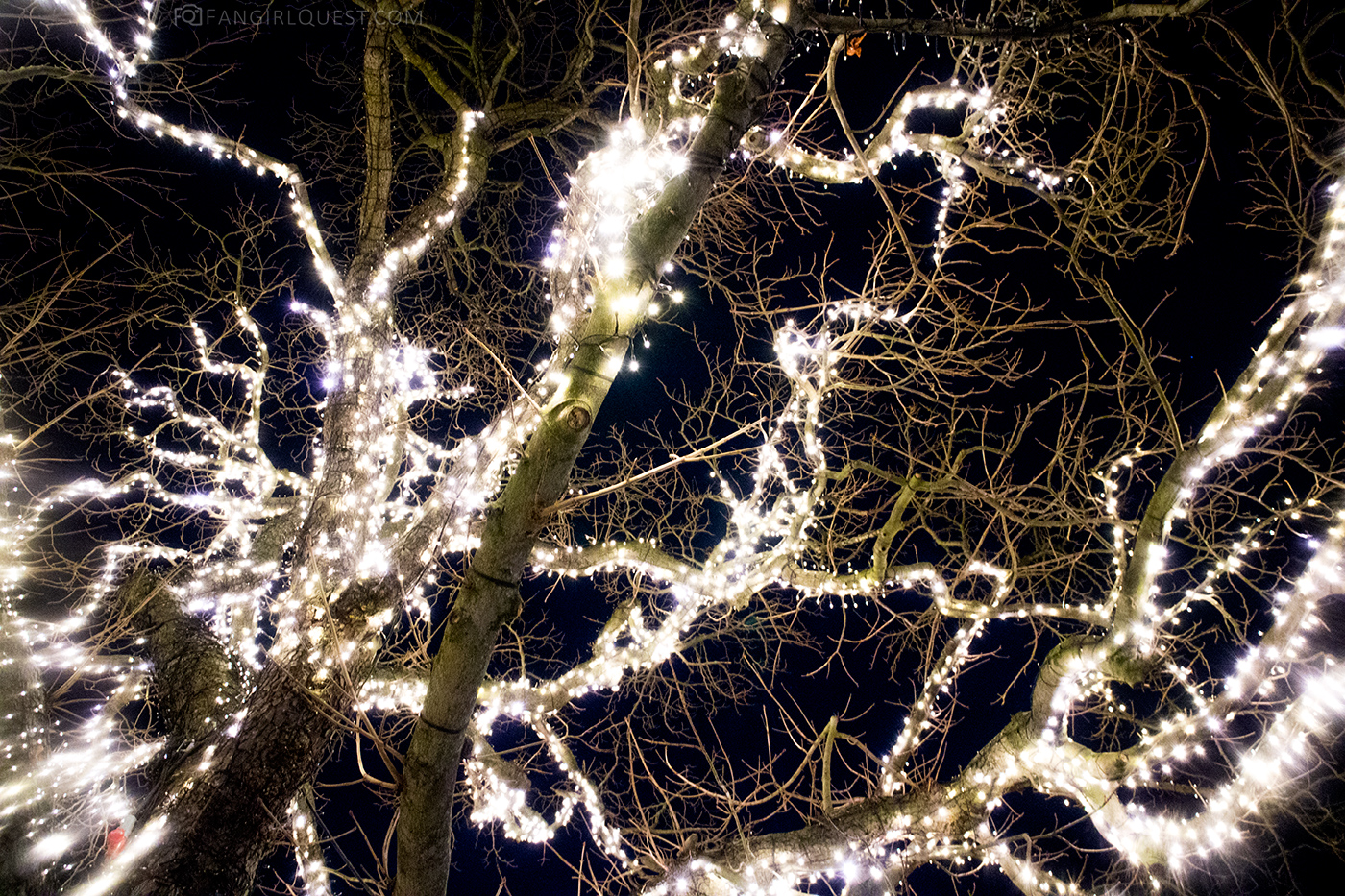 A beautiful tree decorated with thousands of led lights

I so wanted to climb this tree of lights. Too bad we didn’t have time for such shenanigary. 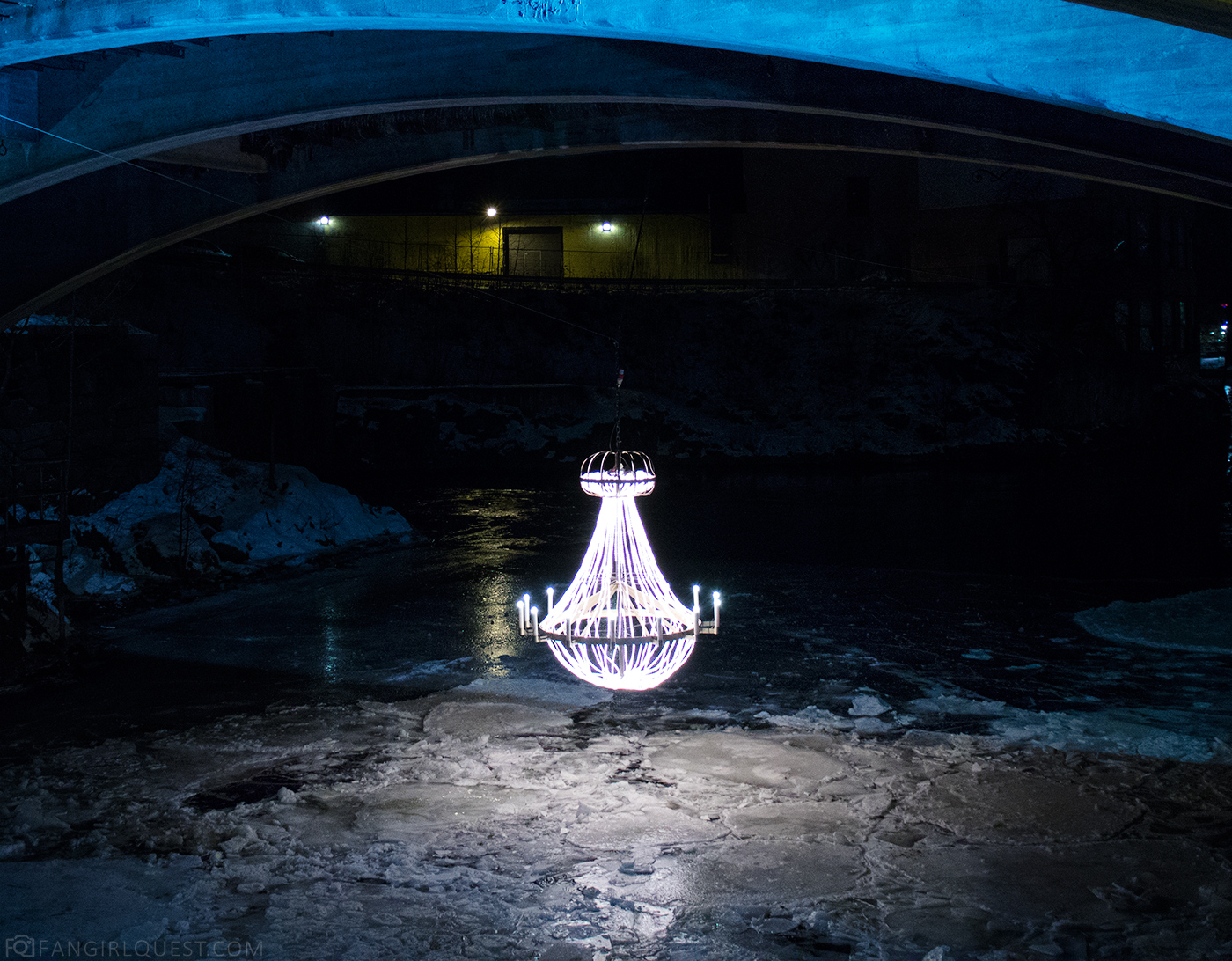 A chandelier under a bridge. Doesn’t make sense, but it sure is beautiful. 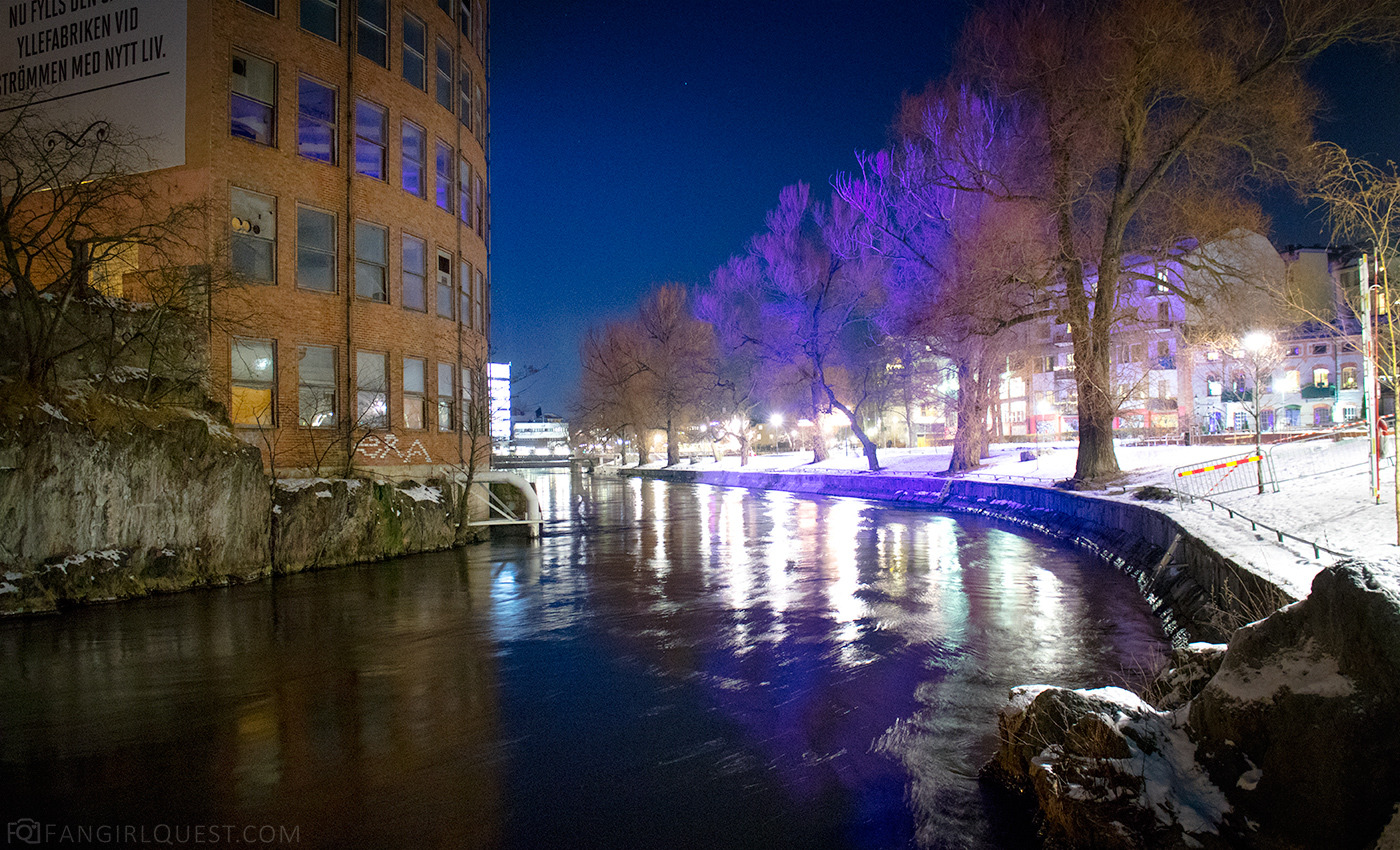 “Stadens Hjärta” is actually an art piece placed inside the building, with the windows shining out different color bright lights. But I loved the way I managed to dig out the colors reflecting on the trees with a rather long exposure, even though you could barely see it with naked eye. 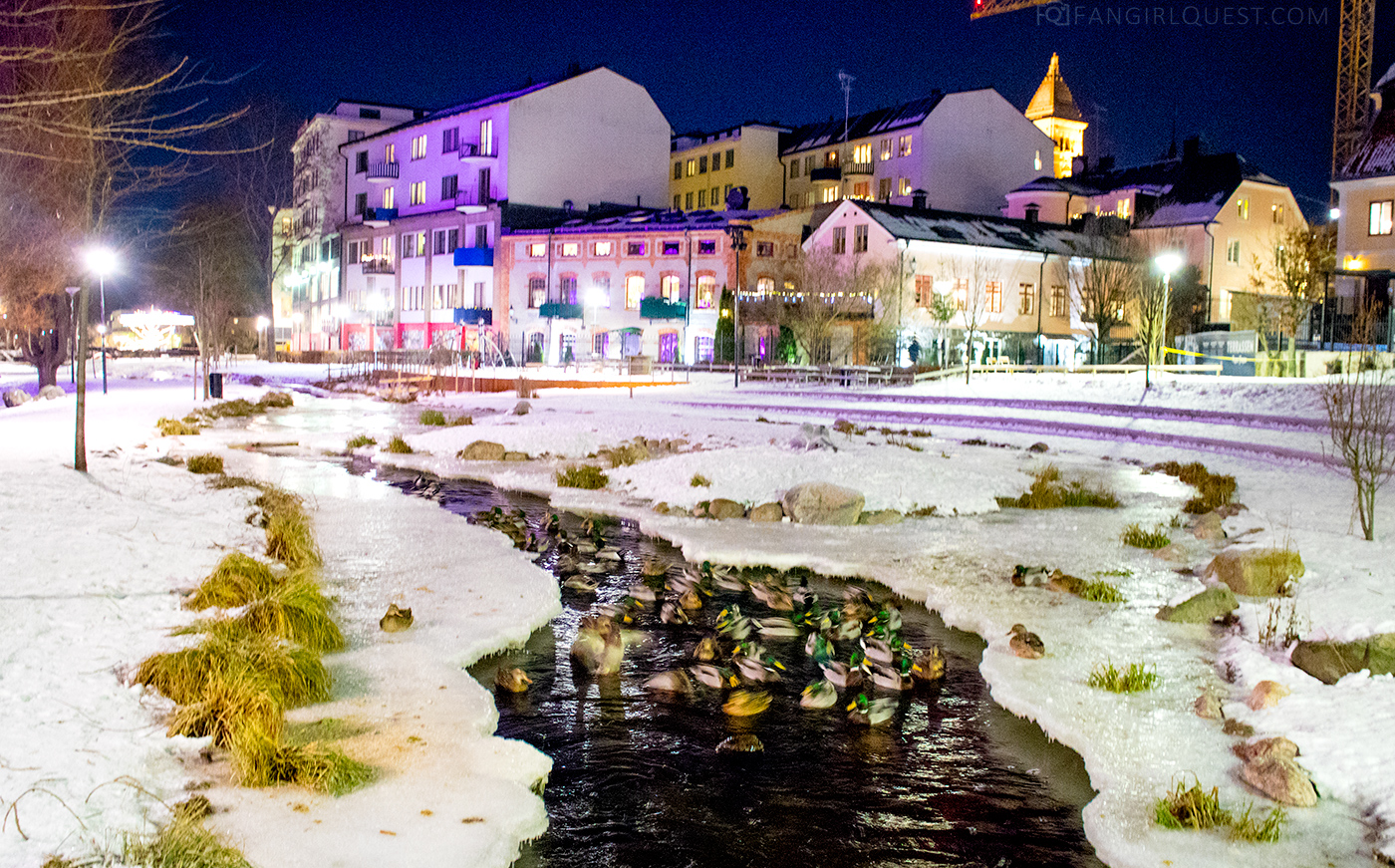 A big bunch of cute ducks enjoying the light festival

The ducks were my favorite, though. They were hanging out in the water, with a large group gathered underneath the next piece. We, the smaller group of bloggers, carefully approached them and tried not to disturb their piece. 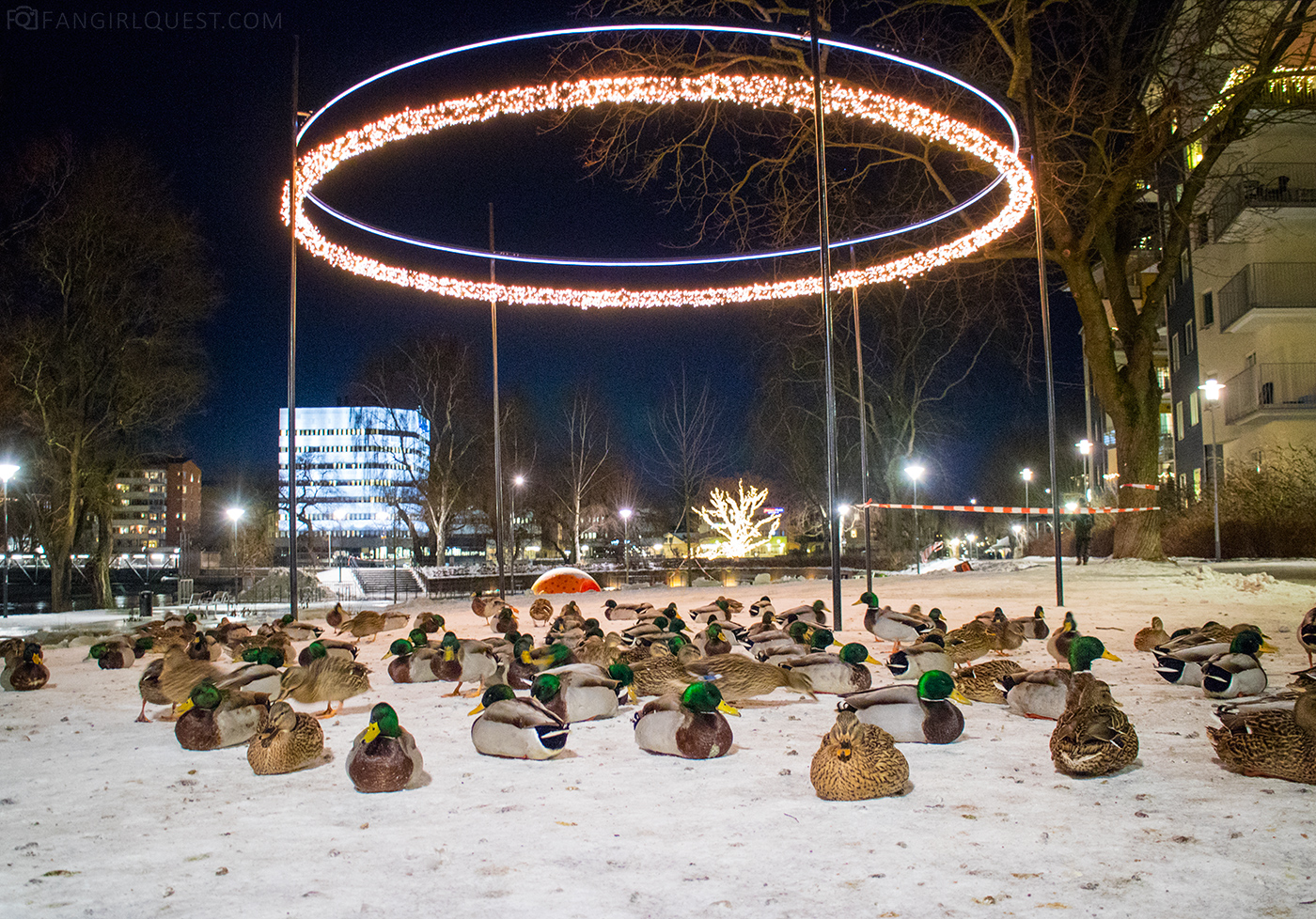 After the duck incident we continued walking along the water and didn’t realise what the next item was about until our guide pointed in the water. Serpents! Sneaky serpents made out of light swimming back and forth in the cold water! Amazing. I can’t imagine the work they put into this, trying to set it all up in the cold murky water. 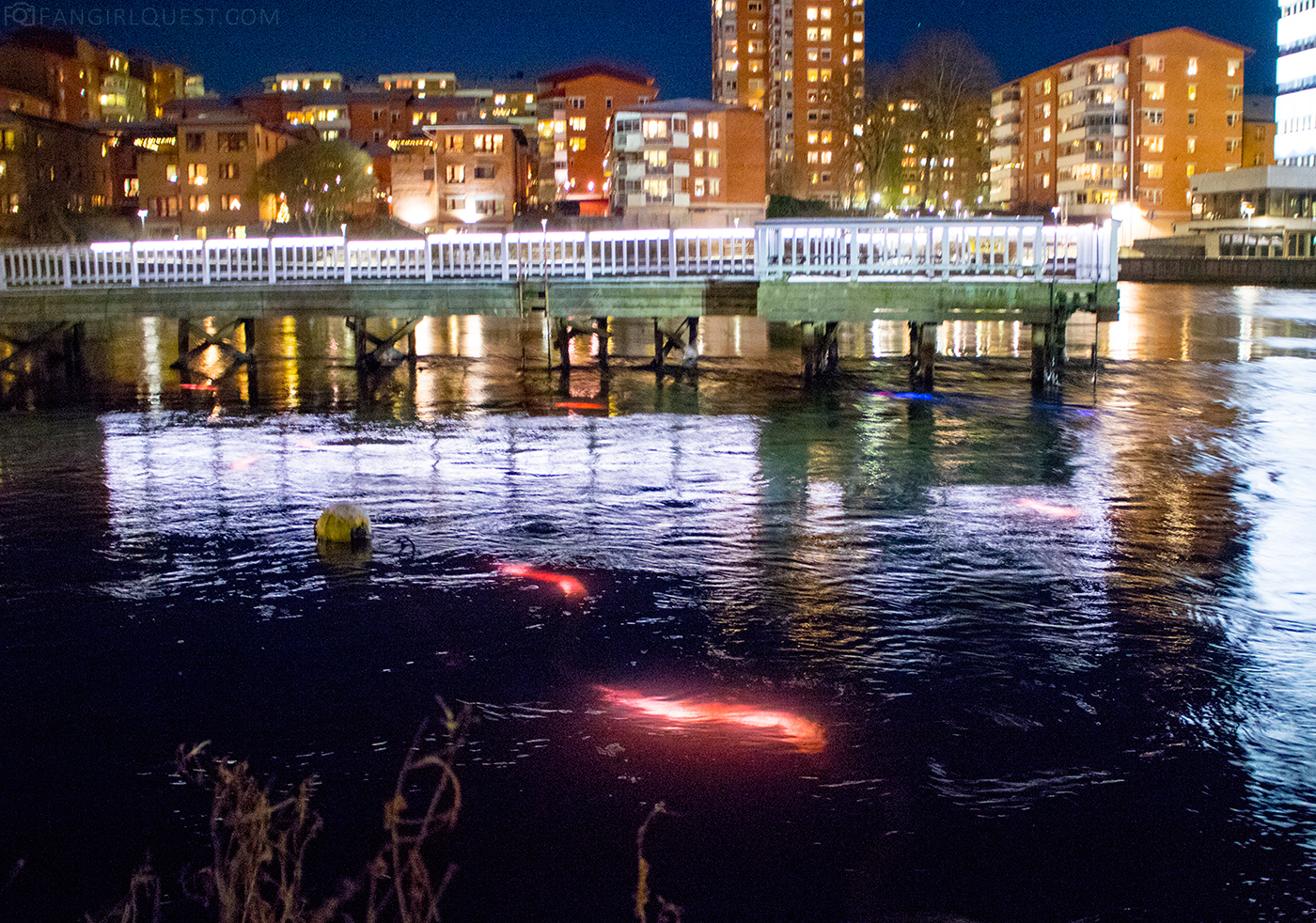 The last light installation of the night was this beautiful, big paper boat lookalike in the middle of the river. 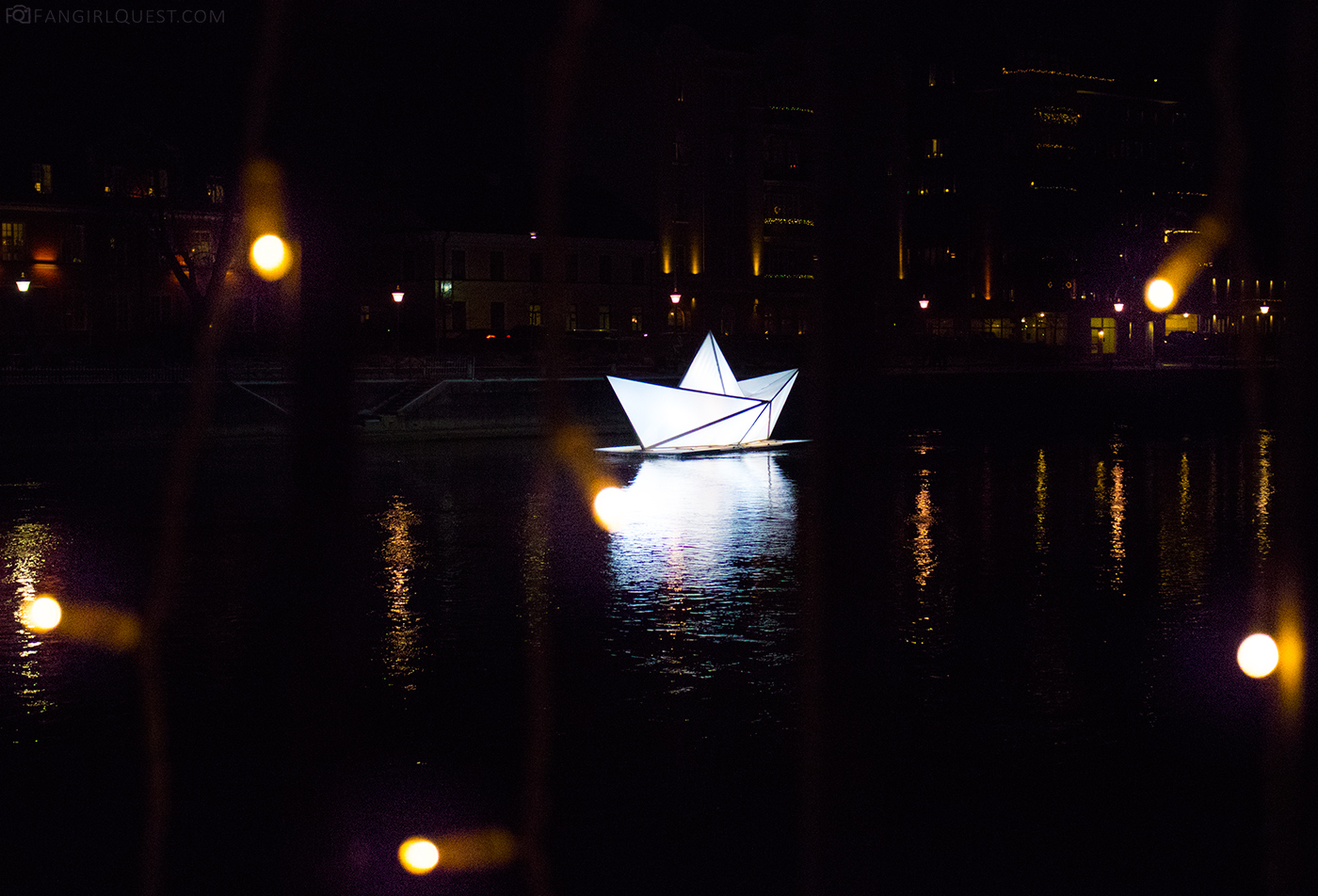 The light festival ended on the last day of January, but seeing as it must’ve been a big success, here’s to hoping they’ll do it again next year with new artists and ideas!

More information on Norrköping Light Festival on their website (in English)