In The Footsteps Of Robin Williams, Iron Man & Ace Ventura In Miami

Robin Williams and Nathan Lane as the charming couple in Birdcage.

Sunny beaches, brilliant colors, palm trees, gardens and stunning art deco houses: it’s no wonder so many film productions have chosen Florida as their filming location. During our roadtrip, we (of course!) went hunting for a few movies filmed in Miami.

There’s a very distinct feel, light and look to Florida that’s pretty hard to fake anywhere else in the US. Surprisingly, one very famous TV show did it anyway: Showtime’s Dexter shot just a few establishing shots and scenes in Florida, where all events of this long-running show take place, and shot the rest in California. Those cheaters!

When we told our readers & social media followers about our upcoming trip to Florida, we got several requests to feature Dexter in our sceneframing photos. It proved to be a bit of a challenge, but finally, we managed to get a shot. Yay!

There are a few actual Dexter filming locations and buildings in Miami that still exist: Dexter’s home, the luxury condo, is a private condo community called the Bay Harbor Club in Miami. Since it looked like a very private building with a closed off courtyard, we decided to respect the residents’ privacy and not to go for a visit.

Sadly, a few other Dexter Florida scenes that we managed to track down just didn’t have the kind of shots we need for the sceneframing photos: aerial shots, super wide shots, shots that only feature a few extras simply don’t work, so we had to skip those ones too.

However! There was this one amazing promo shot of Dexter himself reading a paper somewhere in Miami. Now, the background might have been added there digitally after the actual portrait was shot, but we recognized the buildings in the background and tadah! Totally went for it.  The hotels in the background matched up perfectly, and we finally had our Dexter shot. 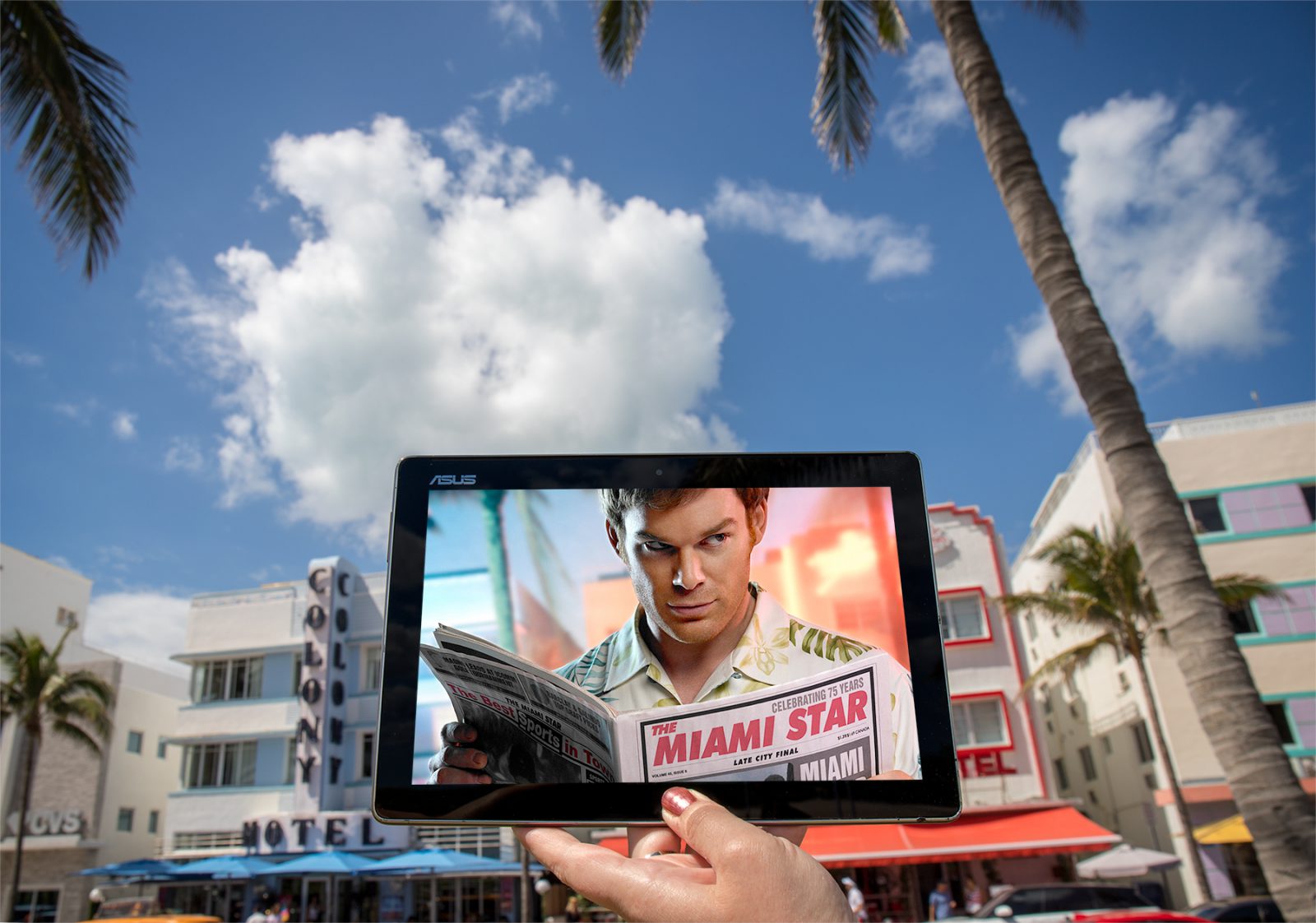 Very close to this Dexter location is another one we were very excited about: the nightclub from Birdcage (1996). This amazingly fun, dear to our hearts film starred Robin Williams, Nathan Lane and a bunch of other amazing talents and was filmed in Miami. The nightclub featured in the movie was portrayed by The Carlyle, a condominium hotel right on Ocean Drive. The front looks a lot different these days, but this fun shot on the side street gave us everything we needed: the two main characters in a sunny Miami setting. 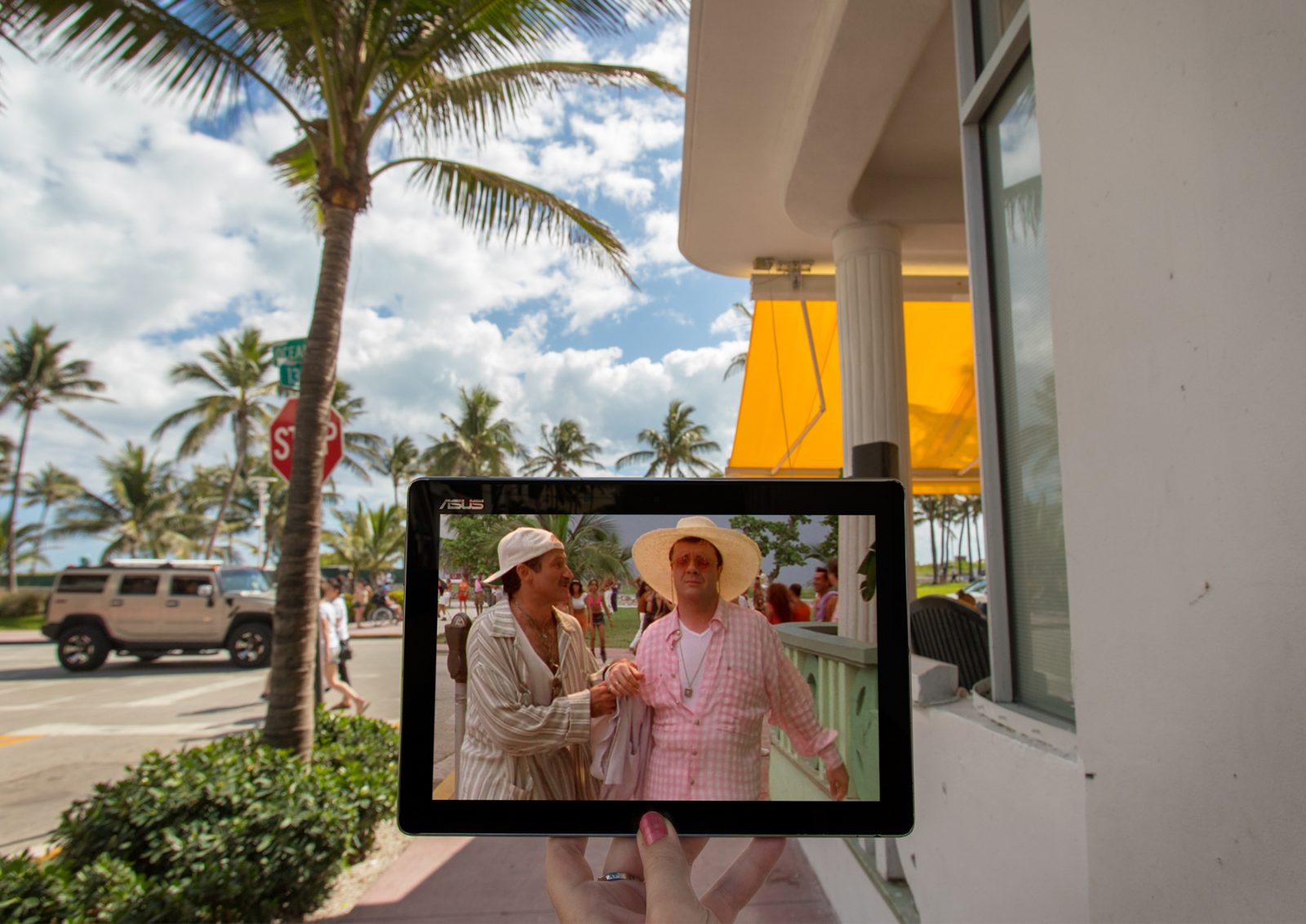 Robin Williams and Nathan Lane as the charming couple in Birdcage.

It would’ve been pretty amazing to actually be at the Vizcaya Museum and Gardens when they filmed Iron Man 3 (2013) or the old gigglefest classic Ace Ventura (1994). But it was pretty cool to go and track down the filming locations years later, seeing as we got to stand on the same spots with such legends, Robert Downey Jr. and Jim Carrey. 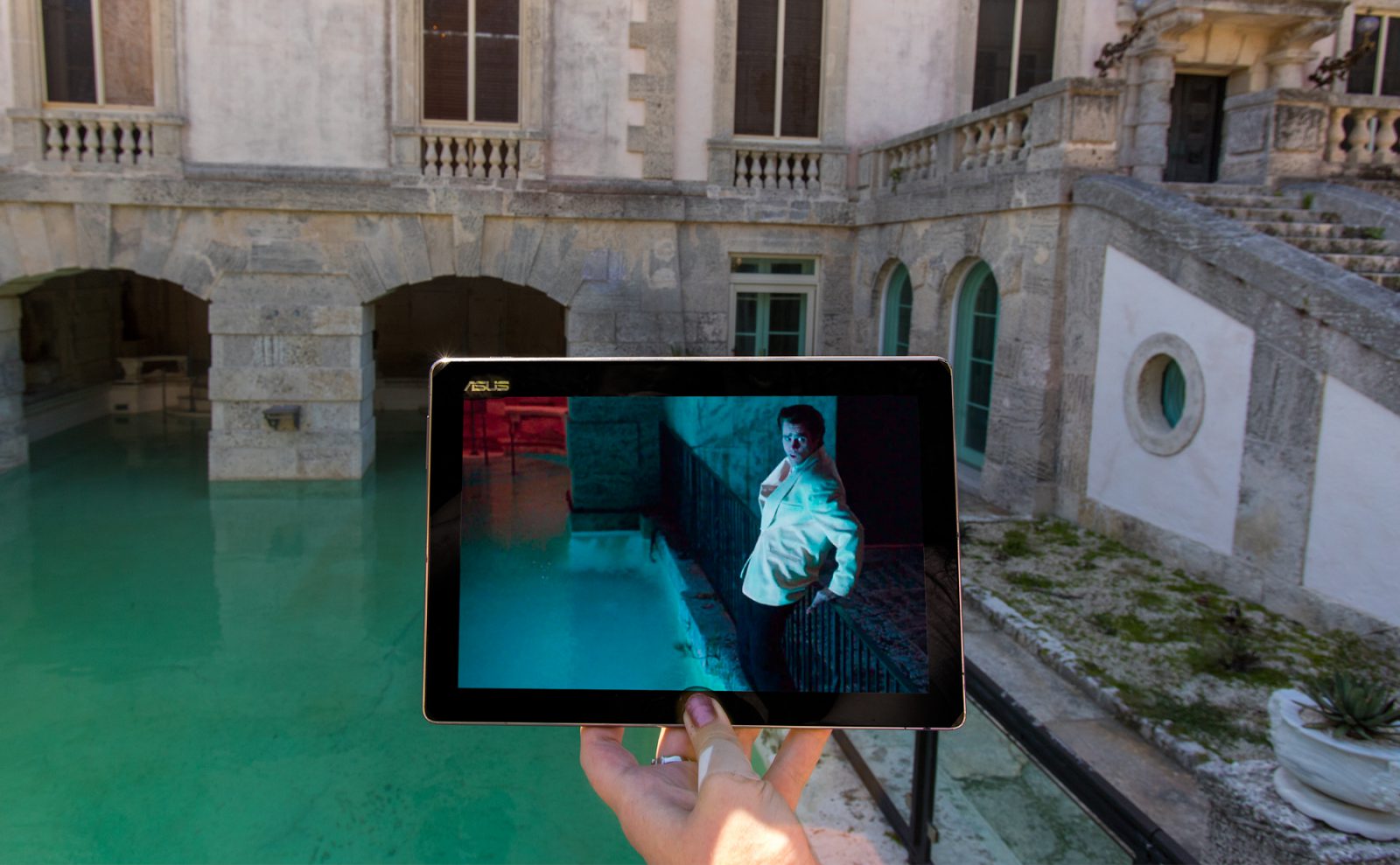 The swimming pool area and a few other locations on the museum grounds were seen in Ace Ventura, whereas Tony Stark adventured in the backyard garden, sneaking over the fence, up the stairs and later appearing in the full Iron Man costume underneath one of the gazebos. 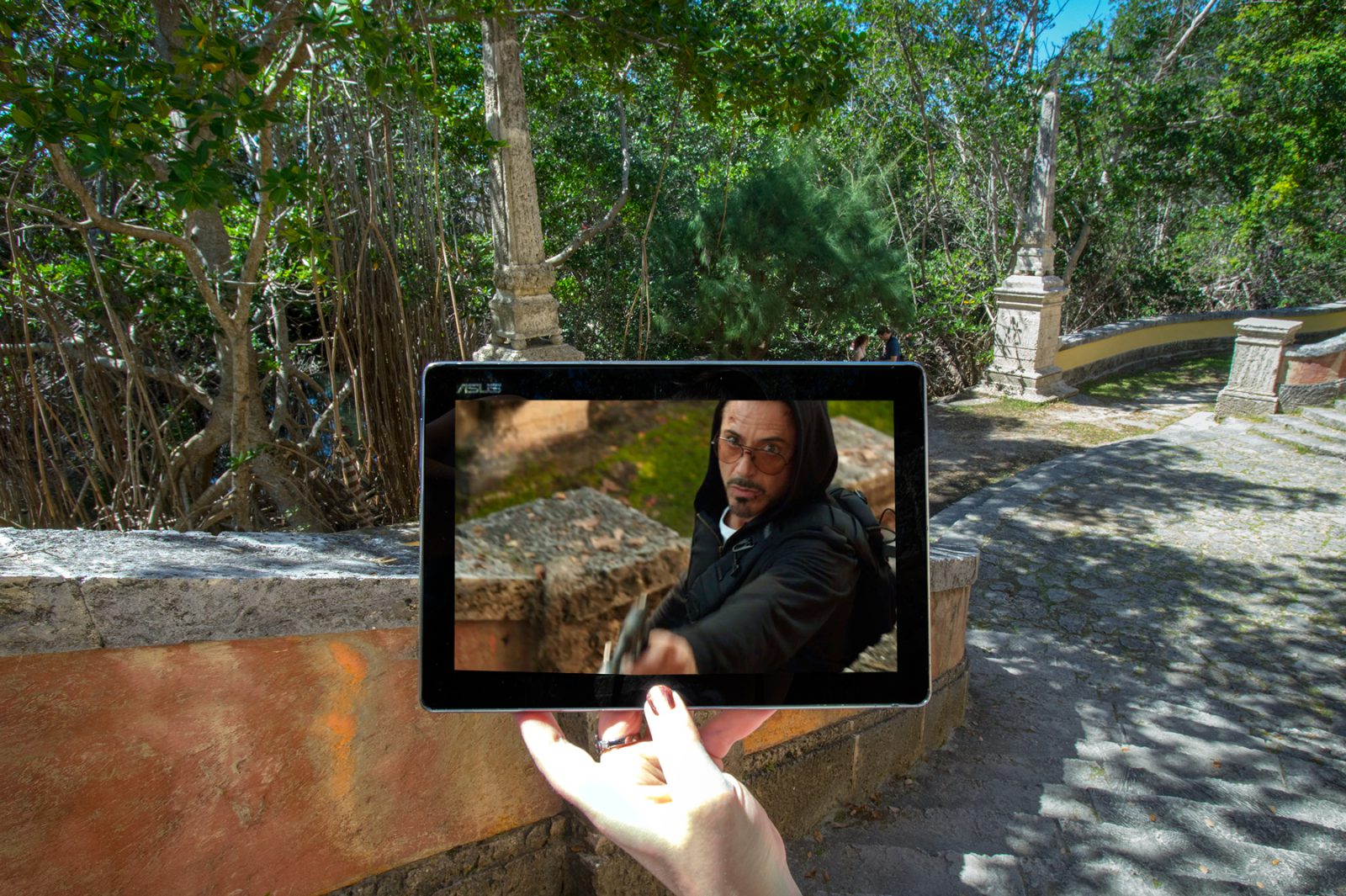 This turned out so cool: the angle was a tough one (I needed to basically lie on the ground to get underneath the tablet, while Satu held it gently with two hands instead of the usual one) but we managed to align the beautiful paintings in the ceiling and all. 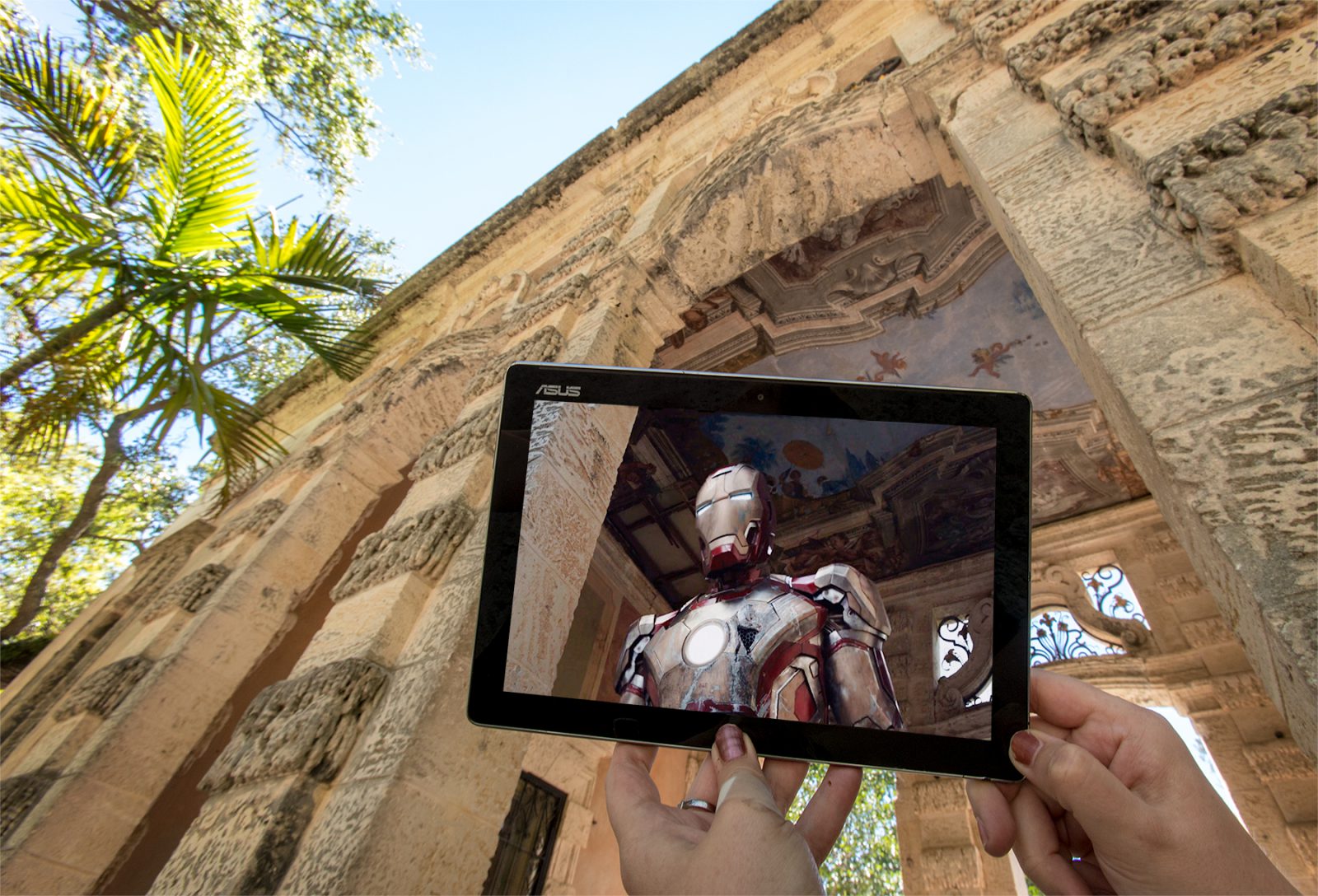 Other notable movies filmed in Miami (AKA reasons to go back!)

Even though we roadtripped around Florida for almost two weeks, we had so many things to see and do that we couldn’t quite cover all the filming locations we would’ve wanted. So, for our next trip we could maybe line up some of the following films for location hunting and sceneframing: The Bodyguard, Days of Thunder, The Devil’s Advocate, Donnie Brasco, Edward Scissorhands, Indiana Jones and the Temple of Doom, James Bond: Licence to Kill,  Ocean’s Twelve, Prestige, Rock of Ages and oh, my oh my, Al Pacino’s Scarface.

Here’s to hoping we’ll get back to beautiful Florida some day!

Stay tuned for more Florida tips, photos and travel stories. We’ve got quite a lot to tell ?