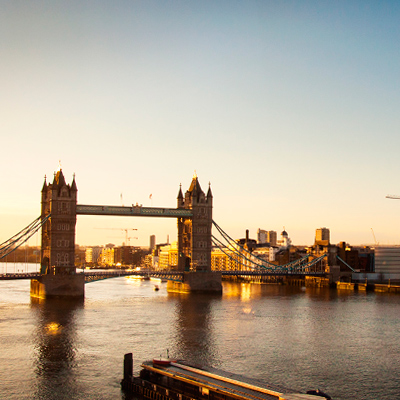 Luxurious hotels, theatre backstage secrets, amazing meals high up above London and hidden behind grand facades, super fast boats and fancy cars, Mad Hatter’s afternoon tea and cakes, eight miles of movie and theatre costumes, Martini masterclasses.. sound good? Well, it is. London is a city that has everything to offer, and for film fans like us, it’s especially amazing. Here’s a few super exciting London experiences we’d like to recommend, especially if you’re into James Bond and films in general. Second part coming up soon! 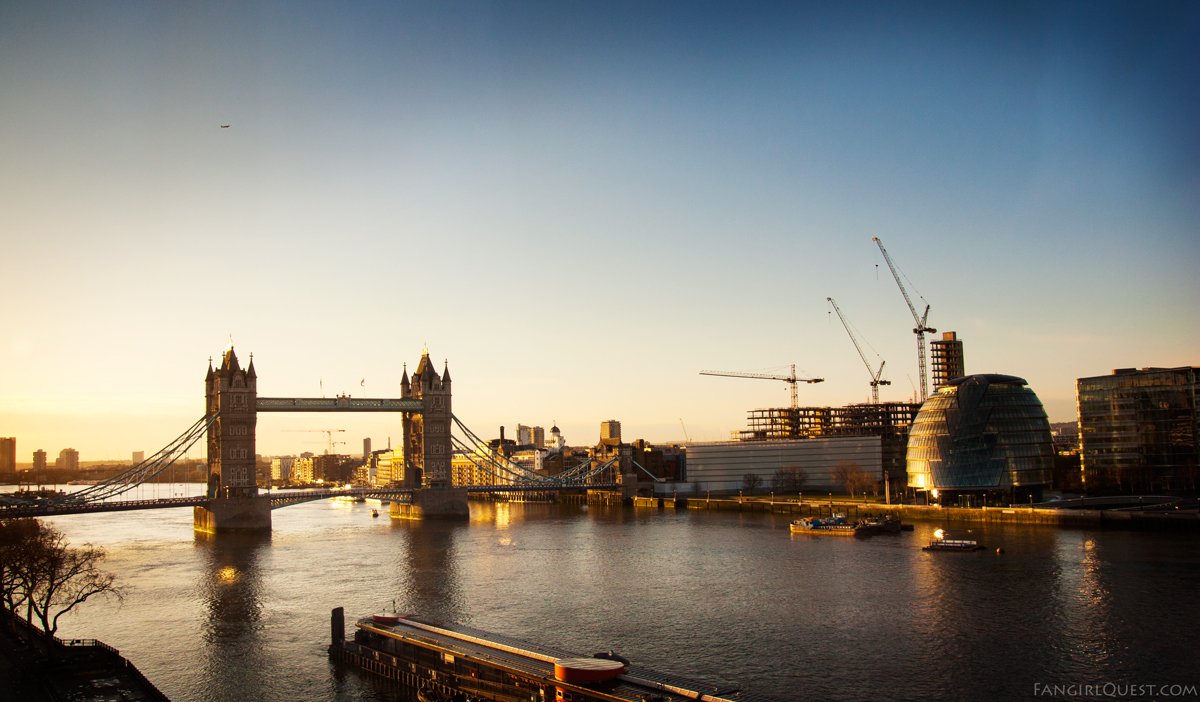 UPDATE March 15th 2016: This story was originally based on our trip that took place in 2014, but since I was a bit of a clumsy travel writer back then, I’ve now updated it plus added tons of new film fan stuff for our readers’ travel convenience. Hope you enjoy! -Tiia

In case you want to visit the filming locations hidden between the gardens, buildings and shops in London and you’re ready to spend a little time on foot, this thing is just for you! Brit Movie Tours offers several different tours around London and all around the UK. We joined a nice guide for a tour on our second day.

We were in a bit of a hurry, but we managed to see a lot of interesting alleys and beautiful buildings used in such films as Pirates of the Caribbean, Sherlock Holmes, The Da Vinci Code and Bridget Jones.

Here’s one of our sceneframes taken in the beautiful courtyard of the Somerset House. It’s Keira Knightley as The Duchess (2008). 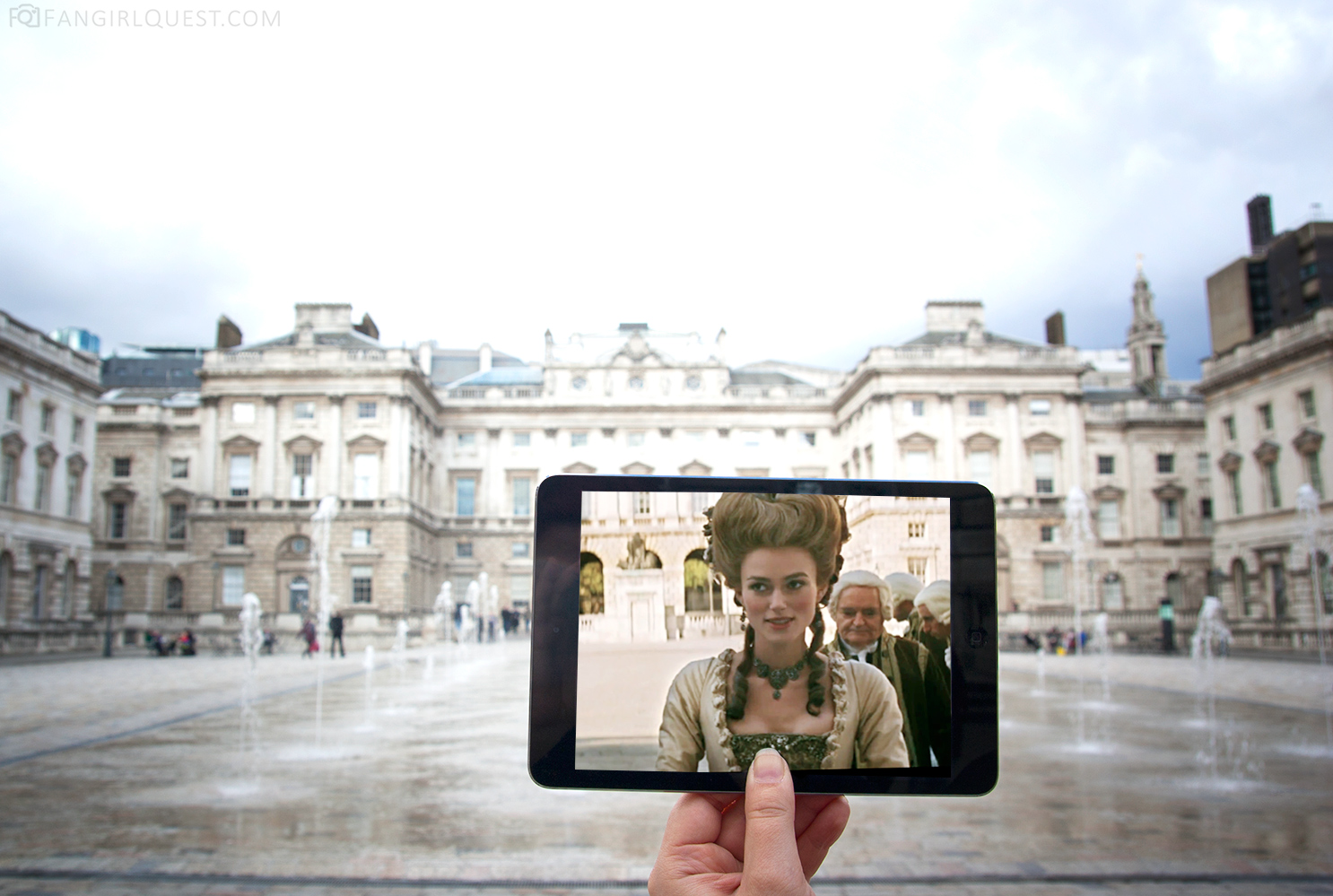 Keira Knightley as The Duchess at Somerset House, London

Our trip began from Cardiff, where we hopped on a train and made our way to London. After a very long taxi ride (not the distance, but the traffic!) we arrived at the Cheval Three Quays luxury apartments located right next to the Tower Bridge. But we made it! We were in a real hurry, as we were joining a group of bloggers to go to the Harry Potter Studios, and our ride was leaving in just a few minutes.

A very friendly, funny concierge offered to take us upstairs although we didn’t really need any help finding our room, but honestly, I’m thinking he joined us just because he wanted to see our reactions to the view from our floor-to-ceiling windows overlooking Thames river. 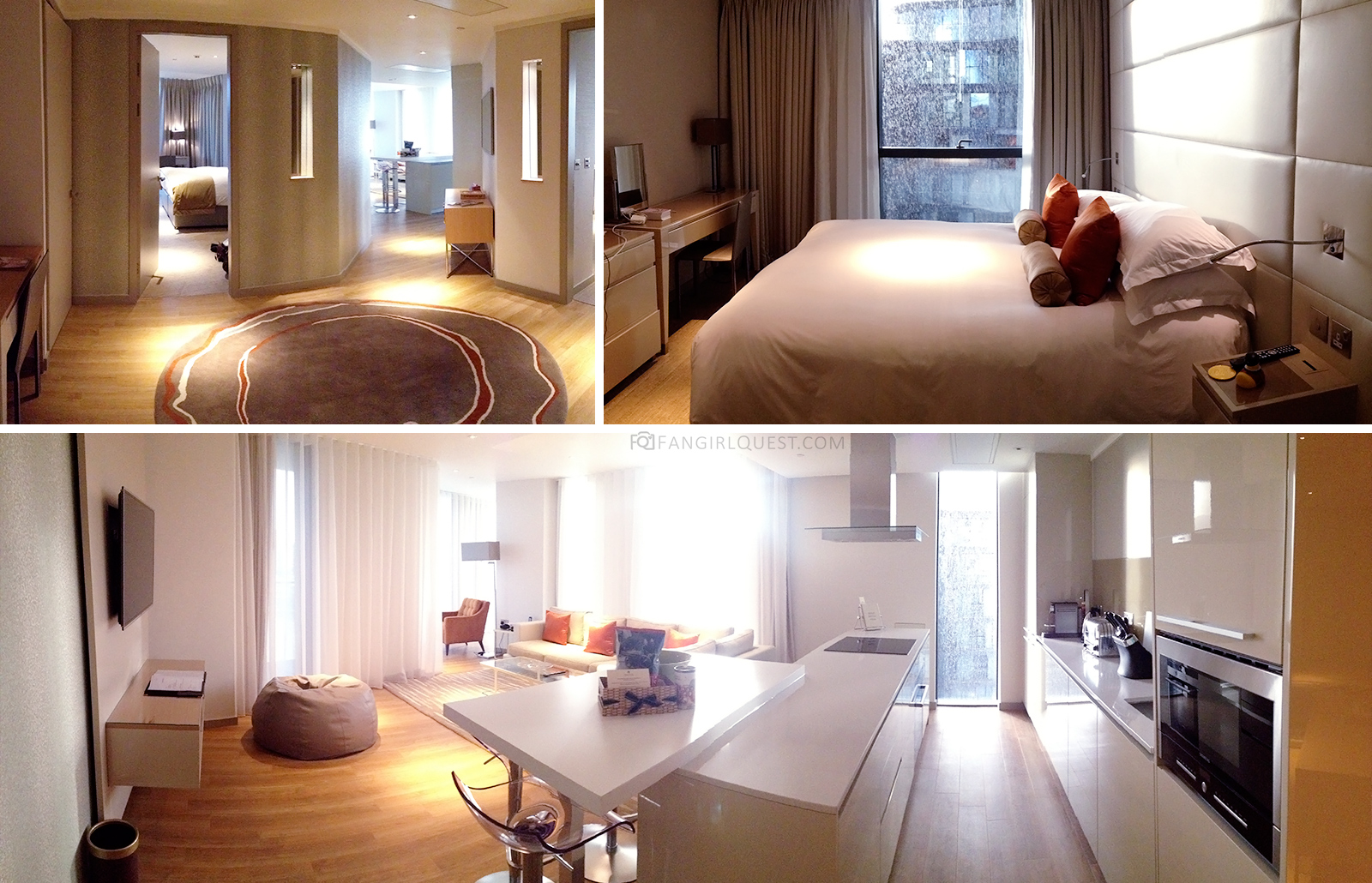 And yes, our reactions were quite enthusiastic. We were running from one window to another to compare our views and letting out little squeaks at the beauty of it all. The concierge was just standing there laughing. It was very funny!

The location of Cheval Three Quays is pretty amazing. It’s literally right next to Tower of London, so it’s pretty easy to make your way there, whether you traveled by public transport or took a taxi. Here’s a photo I took from our breakfast in the penthouse on the first morning. Loving the reflections of the windows on the tower! 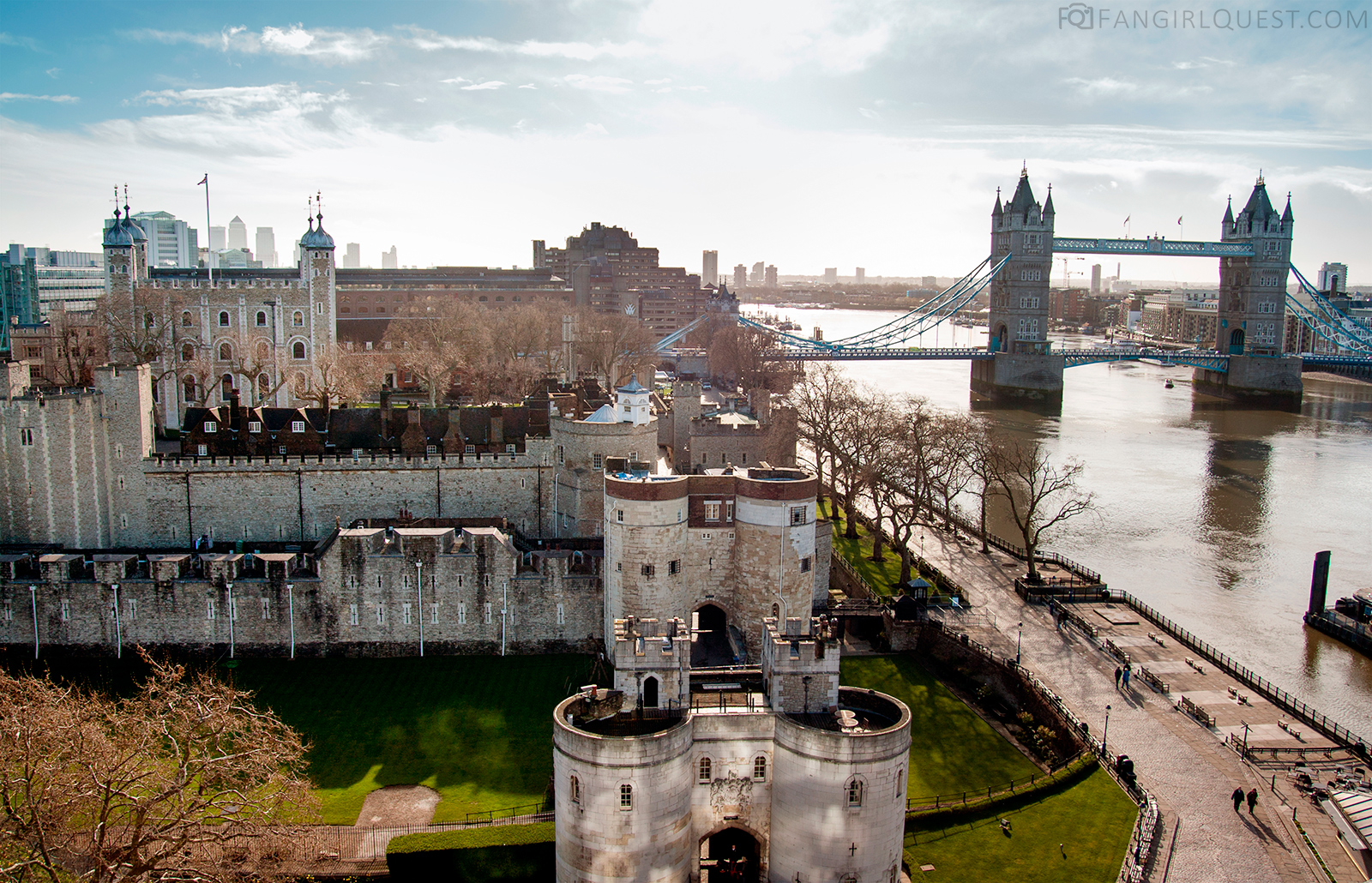 The view of the Tower of London from Cheval Three Quays.

After freaking out about the view we joined the rest of the group and spent the evening at the Harry Potter studio tour, but I’ll talk about that a bit later in a separate post!

YES. YES. YES. This is amazing. One of the best London experiences we’ve ever had. Words can not describe how much fun this boat ride is!! I want to do it again as soon as I can. I want to bring all my friends, too. I want to live on this boat and just travel up and down Thames at full speed for the rest of my life. I want to marry this ride.

In other words, we also got to experience the speed and excitement of the Thames RIB Ride speedboat ride. We were lucky enough to ride all the way to our next destination, the Old Royal Naval College, but you can also get shorter, quicker rides for you and your friends.

Our RIB ride lasted a good while, but let me tell you, it was not long enough! If you get the chance, go and try this. You won’t regret it (unless of course you’re really scared of water and speed and those two things combined!)

Just look at us dorks enjoying the ride… and then find out how to grab a ride with them on their official website.

We finished our ride at the Old Royal Naval College, one of the most popular filming locations in the country – possibly in the world. A must visit for any movie fan and London tourist! We’ve written a separate article from ORNC and urge you to check it out (plus watch a few of the films mentioned) before visiting. 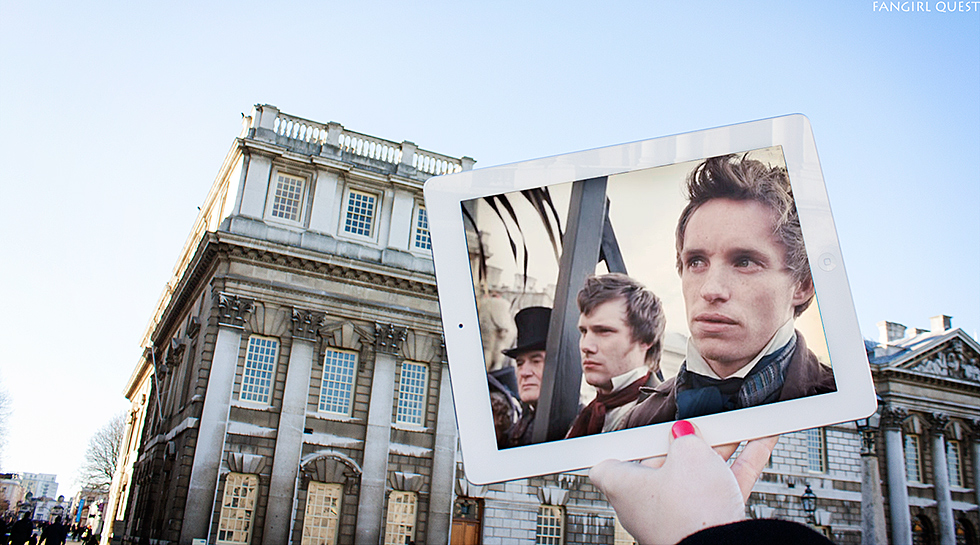 The cutest of all cinnamon buns, Eddie Redmayne in Les Misérables at one of their filming locations: Old Royal Naval College, London, UK

After our wonderful tour at the Old Royal Naval College we had a hilariously quick and efficient lunch on a street corner while waiting for our ride. I was still eating my Feta & Avocado salad in the car on our way to our next adventure: Up at the O2.

And what is that about? Well, let me tell you. It’s about climbing on top of the world’s most popular entertainment venue! The view, the wind, the giggles along the way.. who knew climbing could be this much fun?

The RIB boat ride and climbing on top of the O2 is a brilliant combination for a James Bond fan: the opening sequence of The World Is Not Enough starts with a wild boat chase along the Thames and finally leaves Bond dangling from a hot air balloon above the very same venue! Our ride wasn’t quite as wild as that, but it was close enough…

The O2 climbing experiences starts with a safety briefing in the form of a fun video and climbing guides showing you how to put on your safety harness. And of course, they’ll also be showing you how to actually make it to the top. There’s one guide climbing along with you all the way, too, in case you feel uncomfortable. I thought I would, but to my surprise, I felt really comfortable and safe all the way. The beginning of the climb is a bit steep, but it gets easier the closer to the top you get.

And what a view it is once you make it there! 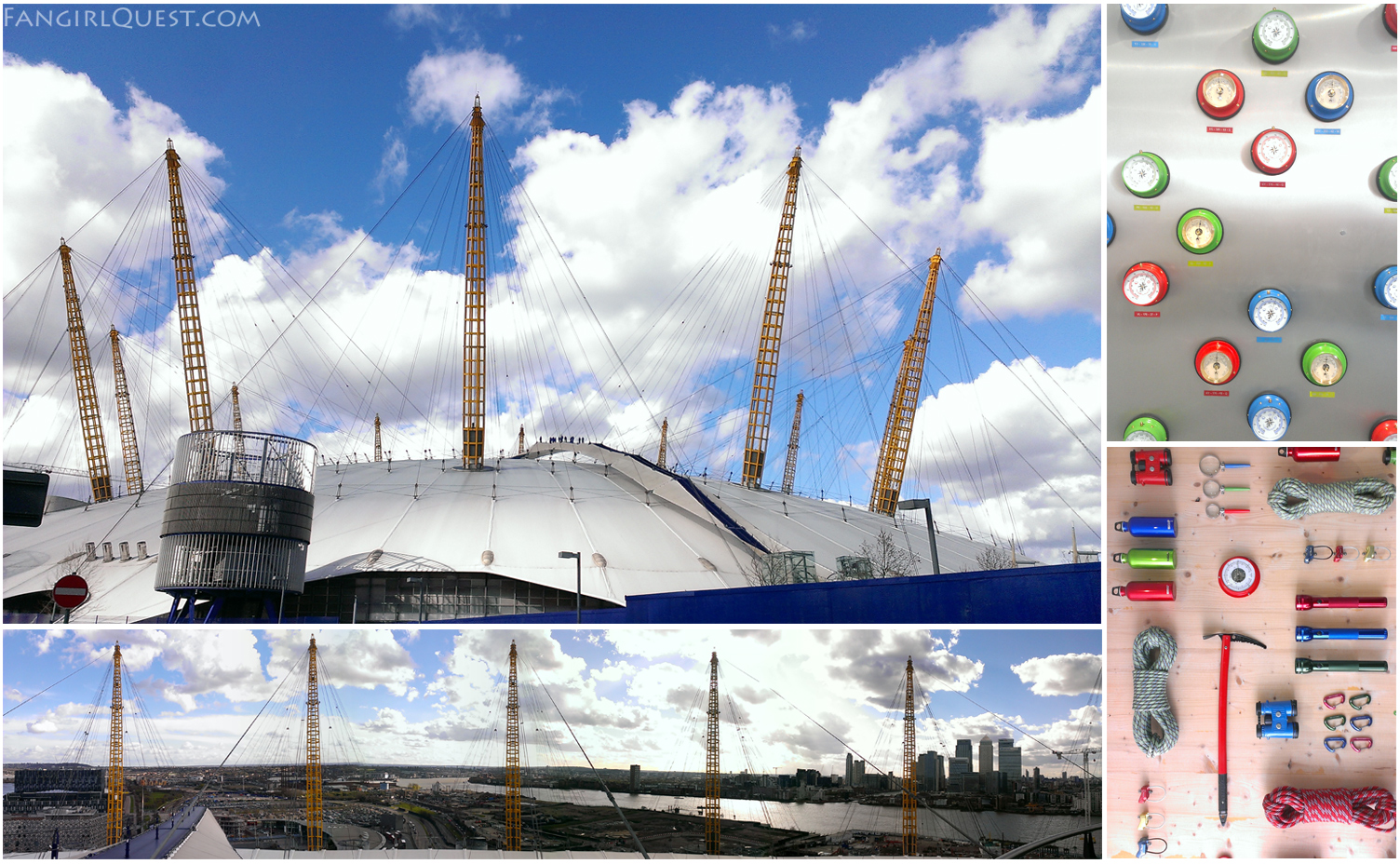 Climb up at the O2 in London… if not for anything else, then the view!

The briefing and the climb can all be done in less than two hours and it’s a wonderful experience. Fangirl Quest happily recommends!

Read more about Up at the O2 on their website.

Part two of our Bond adventure in London coming soon! In the meanwhile, why not check out our England archives for more filming location travels, hotels and other lovely things.