For a Finnish person, being allowed to get a takeaway cocktail in a plastic mug and then walk around with it on the streets of a city is highly exotic. It’s not allowed over here in our cold country full of silly rules and restrictions, so for us, that was one of the hilights of our Key West visit.

Just… getting a delicious fruity drink from a pub in the street corner, then walking around with it, snapping selfies for the folks back home who are forced to sit down in restaurants with their drinks.

Not that anyone would want to go out with a drink in Finland at the moment — it’s winter hell, the streets are slippery and dark and unless you’re a lover of the extreme winter sports like skiing (eugh, who likes skiing??), staying in covered in blankets, watching Netflix is pretty much the greatest option.

But public drinking wasn’t the only thing we did during our lovely 2-night visit to the southermost point of the continental United States.

Arriving at a beautiful hotel after 4 nights in a motel of nightmares: LOVELY.

The drive down to Key West was amazing. Blue waters everywhere, bright sunlight, spectacular views and adorable island villages on the way to look at and wonder: “what would it be like to live here?”. We’d just spent the previous four nights in an awful motel in Kissimmee (but we endured it for Disney World, obv!) so arriving to Oceans Edge Key West Resort Hotel & Marina got us sighing out of relief. “Finally, something nice.”

Beautiful rooms, stunning views, (practically) a private pool in the backyard, delicious meals, kayaking… we were in heaven. It’s true: a hotel room can affect your holiday mood, even if you don’t spend that much time actually hanging out in it. 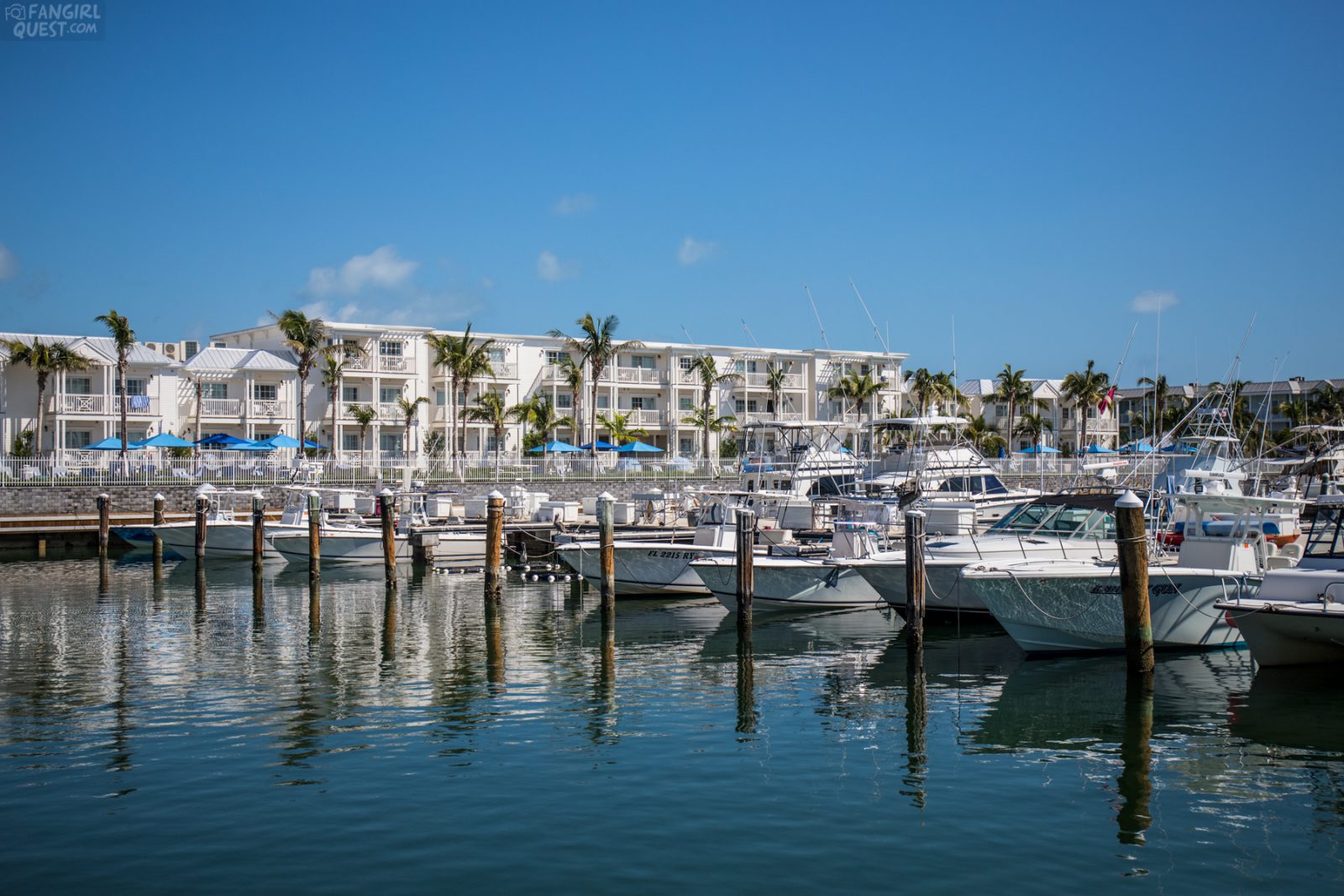 We have a full feature coming up on Oceans Edge (with photos of nightswimming and wild sharks!!), so let’s have a look at our adventures in Key West first.

The first night we were tired from the long drive down from Kissimmee, so we stayed in, swimming in the pools and watching fish and sharks (!) in the marina. The next morning we went swimming again, spent an hour kayaking in the bay, desperately trying to spot some manatees as they said there’s a whole family of them living nearby. No luck, but it was all very exciting anyway.

In the afternoon, we took the hotel’s free shuttle bus to the city center for some food and Key West’s famous Sunset Celebration. We don’t often take time out during traveling to just hang out, get a few drinks and relax, so this was a super special extra treat for us.

Did you know that there’s a lot of CHICKENS living in the streets of Key West? Like, everywhere? Because I didn’t and I loved it! At first I thought it was just a few random ones, living in a nearby house and everyone’s just fine with it. But the more we drove or walked around, the more chickens I kept seeing, so I had to ask Google… 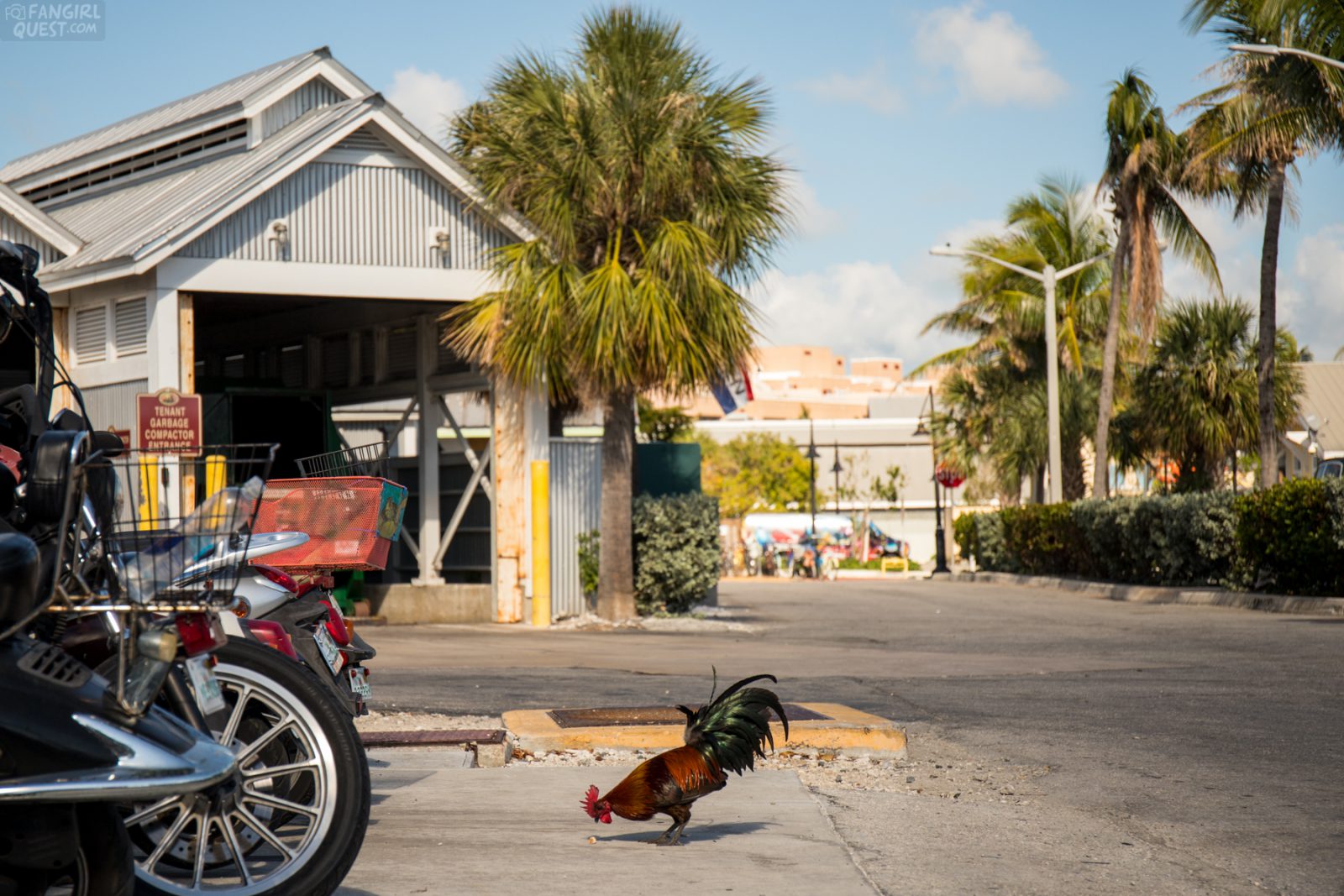 There’s a fascinating, short story about the chickens on the Florida Rambler website:

One sign of how many chickens roam Key West: The wildlife center relocates close to 1,500 a year, Coontz said. And they’re still everywhere. 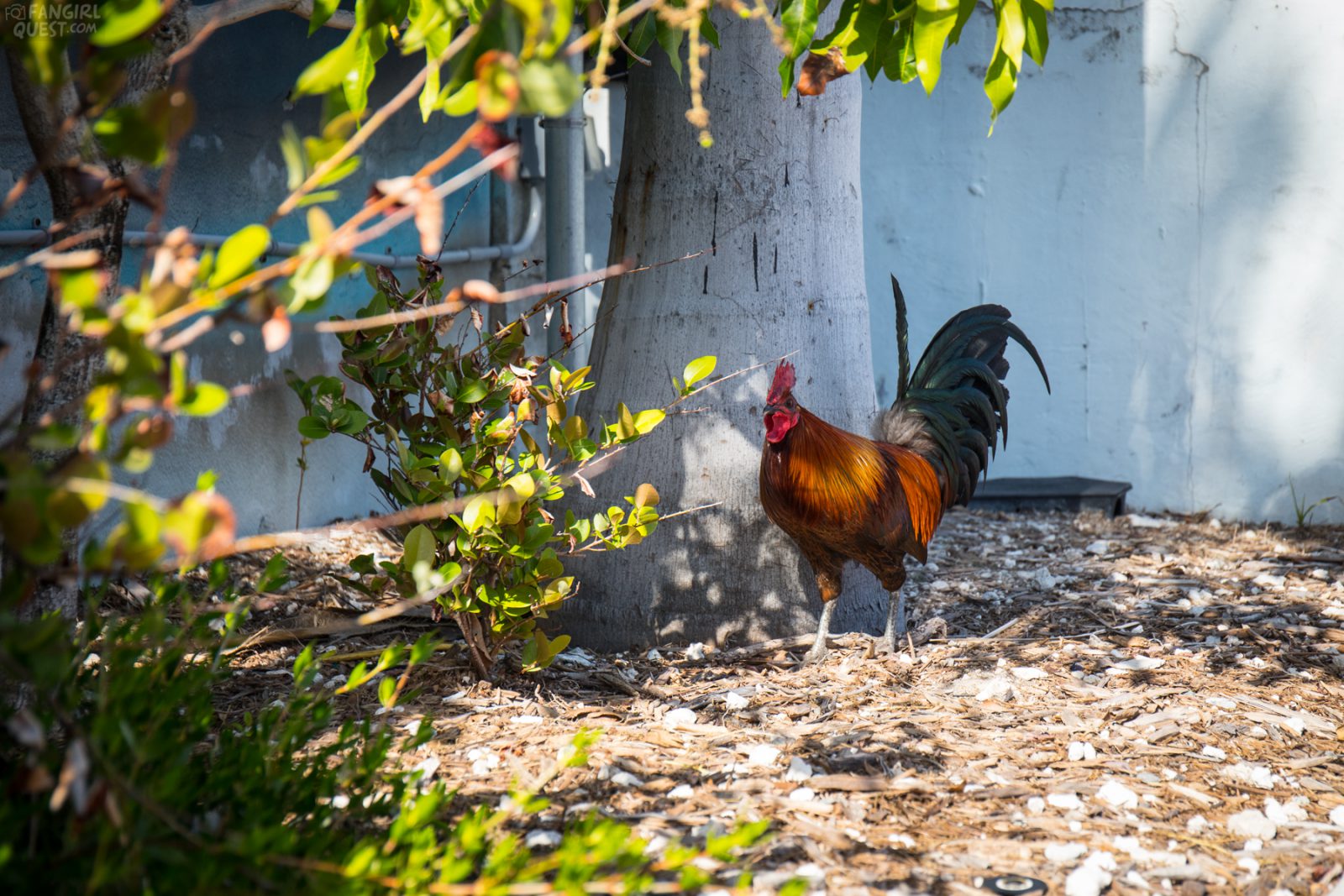 Again, for someone  from a country where no domesticated animal could survive without shelter and feeding through the winter, this was such a fascinating concept to me. Like having chickens in your backyard… but then, they’re not yours, they’re everyone’s.

Anyway, enough of chickens. Let’s look at this photo of Satu really liking a sealife mural before moving on to the takeaway cocktails: 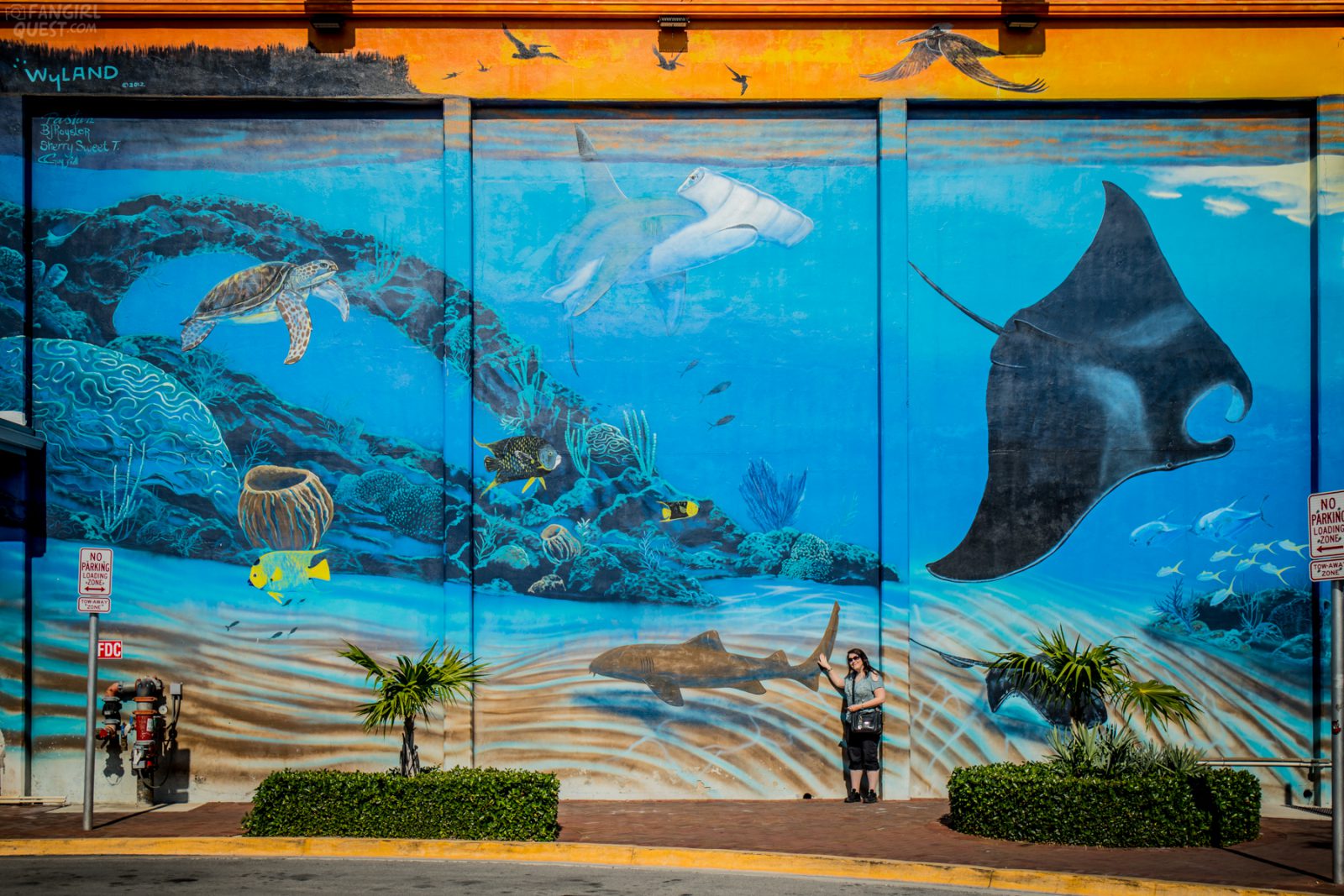 DRINKS!!! Ok, after the admiring of fowl and sealife, we finally got to the real Key West business: grabbing a couple of plastic cups of innccccredibly delicious (and inccccreddibly strong) cocktails to go.

You should’ve seen our smug faces when we finally got them, a cup of something orange and a cup of something pink. We were walking down the street looking like we owned the world and everything in it. Hot day, cool drinks, amazing life, hey!

(If only there was a selfie to show as evidence…) 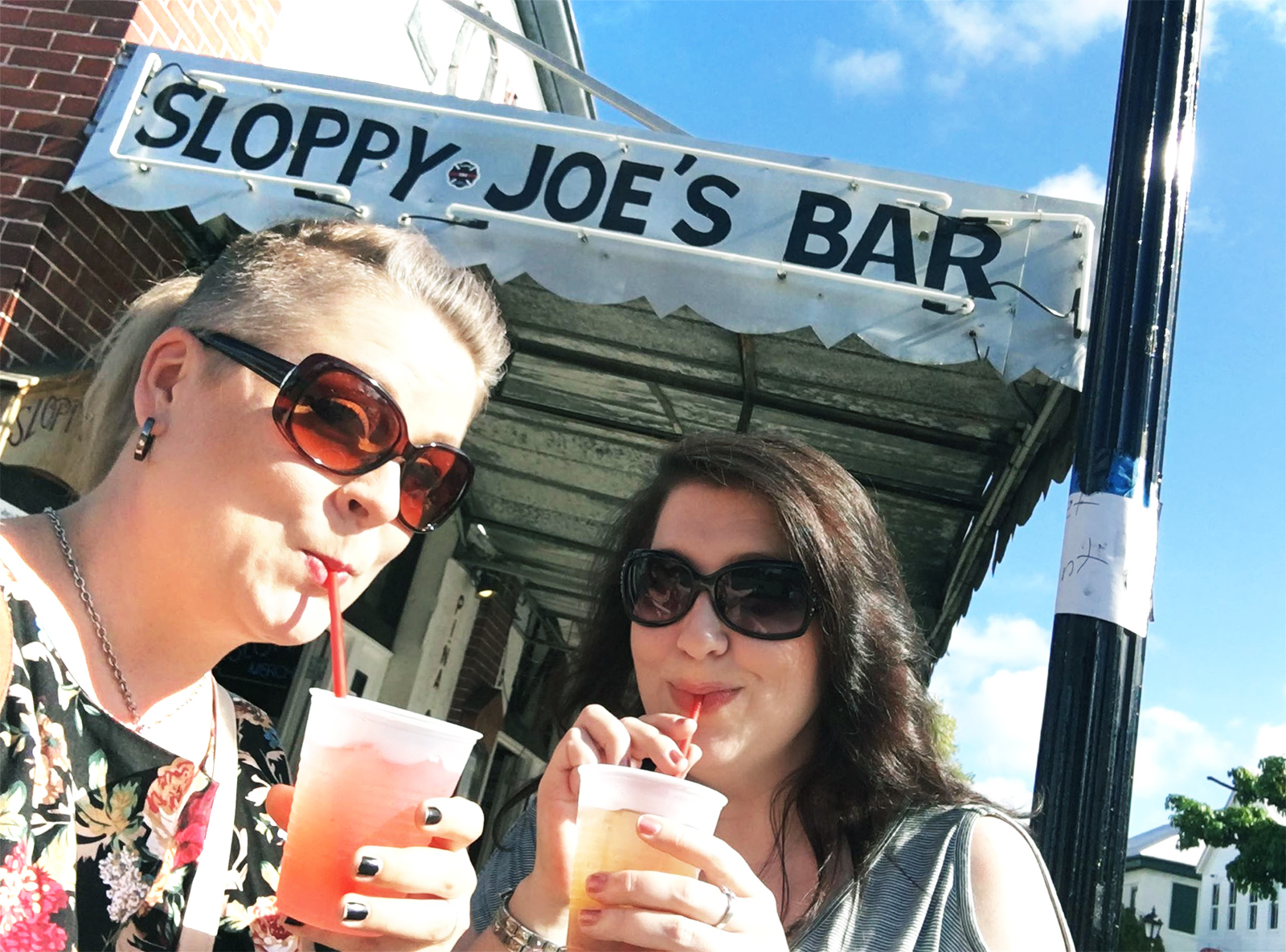 I hadn’t had much time before the trip to investigate all the possible things to see in Key West, but luckily Satu was in the know. She gently dragged me towards something called Sloppy Joe’s, and I soon learned that it’s a spot one Ernest Hemingway used to frequent back in his day.

Again, I looked up some stories: it seems that Sloppy Joe’s practically begun as a speakeasy during the prohibition, but once that experiment was over, it became a legit drinking hole. According to their own history page, Hemingway used to be pals with a dude named Joe Russell, who ran both the illegal boozey business and then later, the pub now known as Sloppy Joe’s to all tourists who make their way down south. 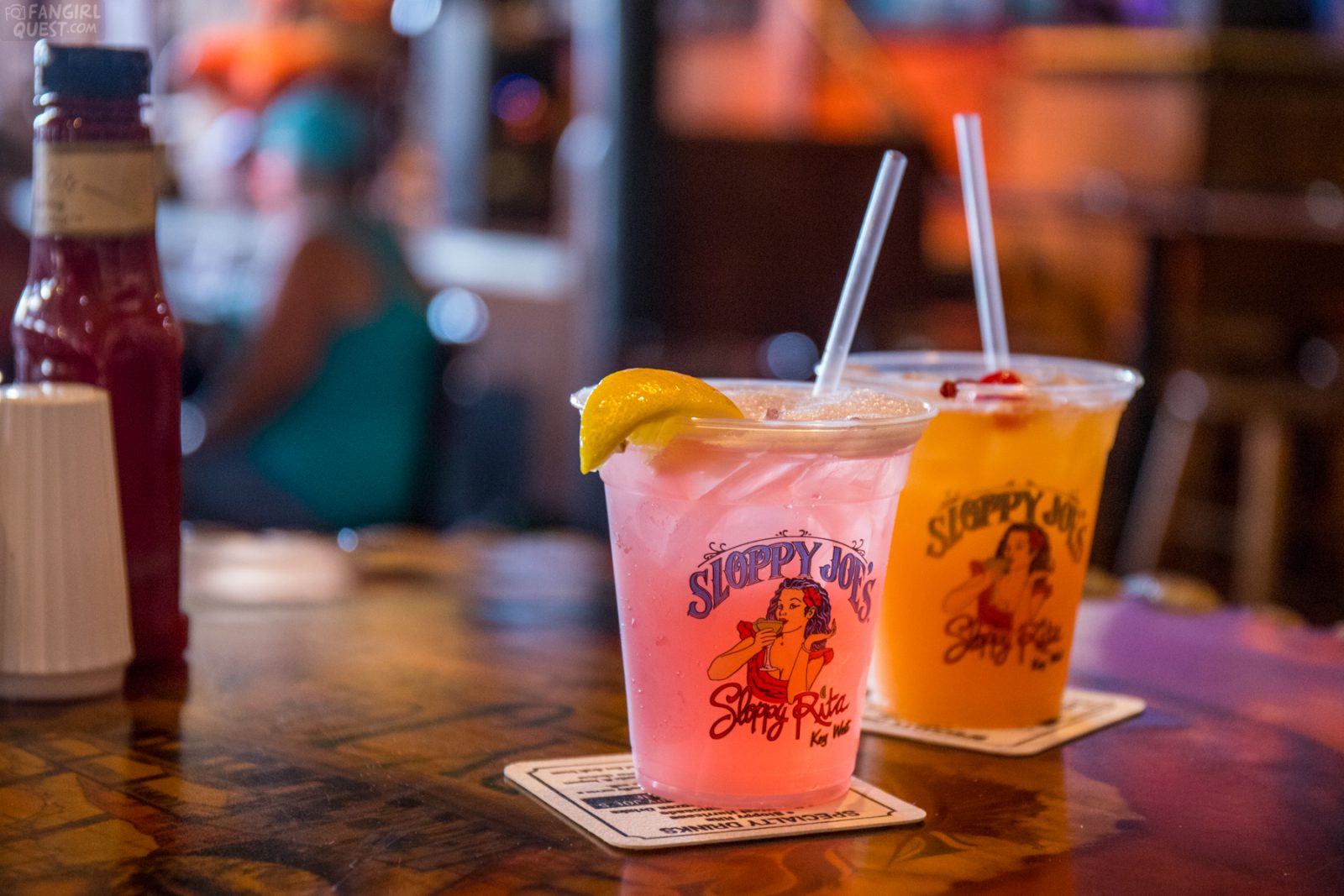 By this time, we had finished our first drinks and ordered some new ones. Again, we went with the shades of pink and orange, which to an ordinary viewer might seem a tad misleading: it seems that the Key West spirit is… well, a very spirit-y one. Both of us scrunched our noses at the juice-alcohol ratio. Yummm… brrrh!

And let’s not even talk about the Sloppy Fries… I mean, the picture tells it all. These were no ordinary fries and they did not come in a “snack size” as expected. 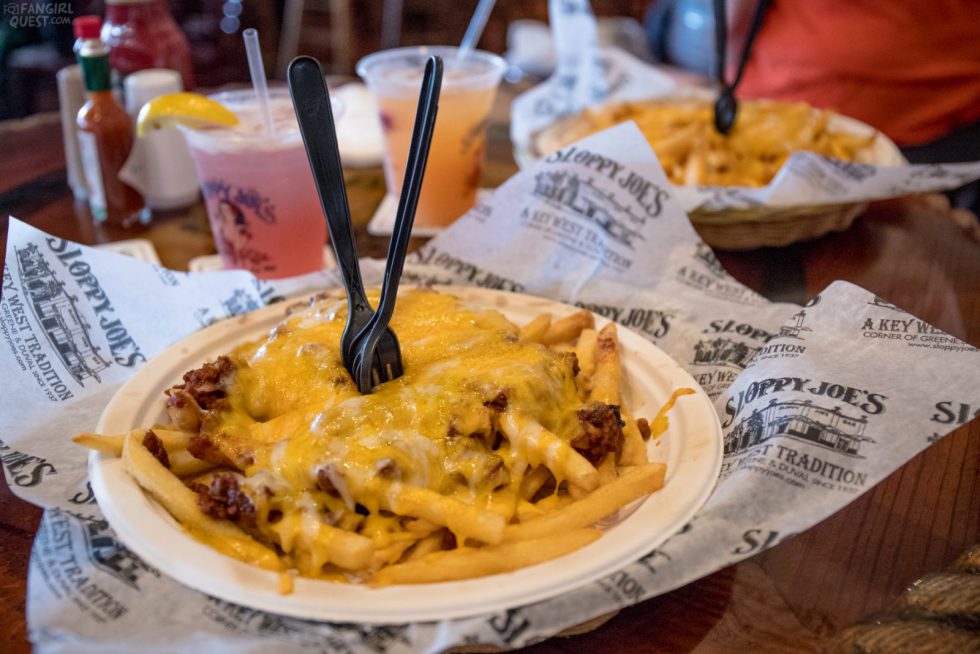 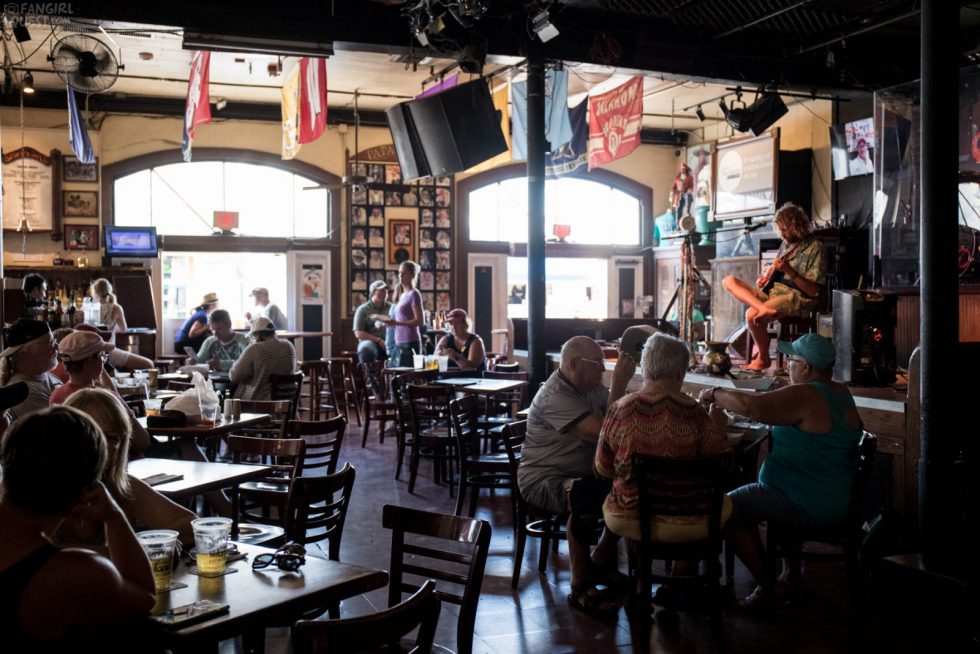 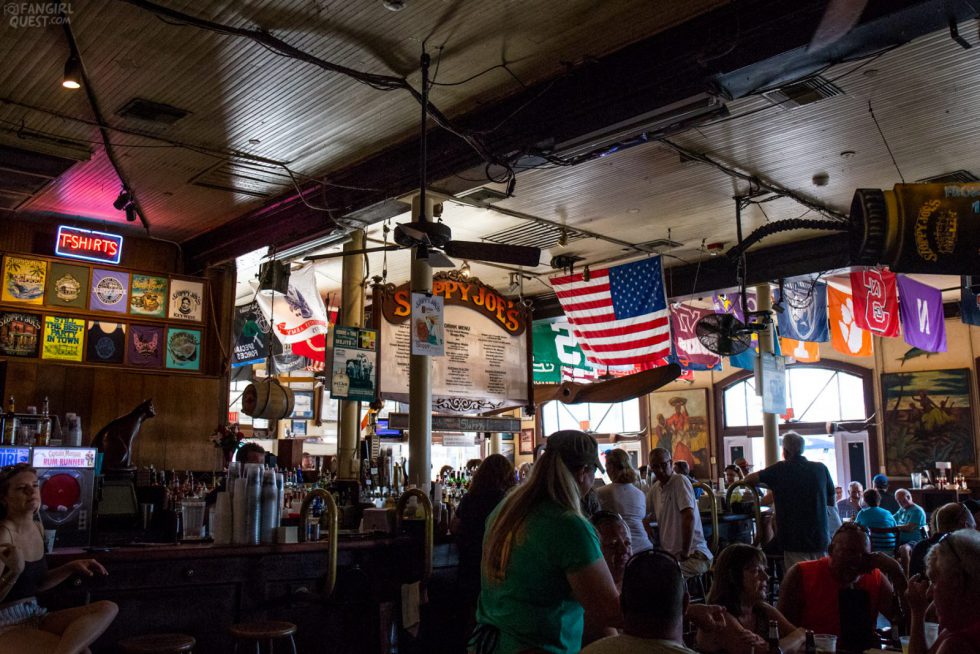 After our extremely filling but tasty, early dinner we headed out again and visited Mile Marker 0. Yes, it’s literally just a mile marker, but it’s quite a popular spot for selfies and other types of photos, apparently. It marks zero, after all: the beginning of the longest north-south road in the United States, U.S. Route 1 (US-1), which runs the East Coast for 2,369 miles stretching from Fort Kent, Maine at the USA-Canada border all the way down to this spot in Key West. 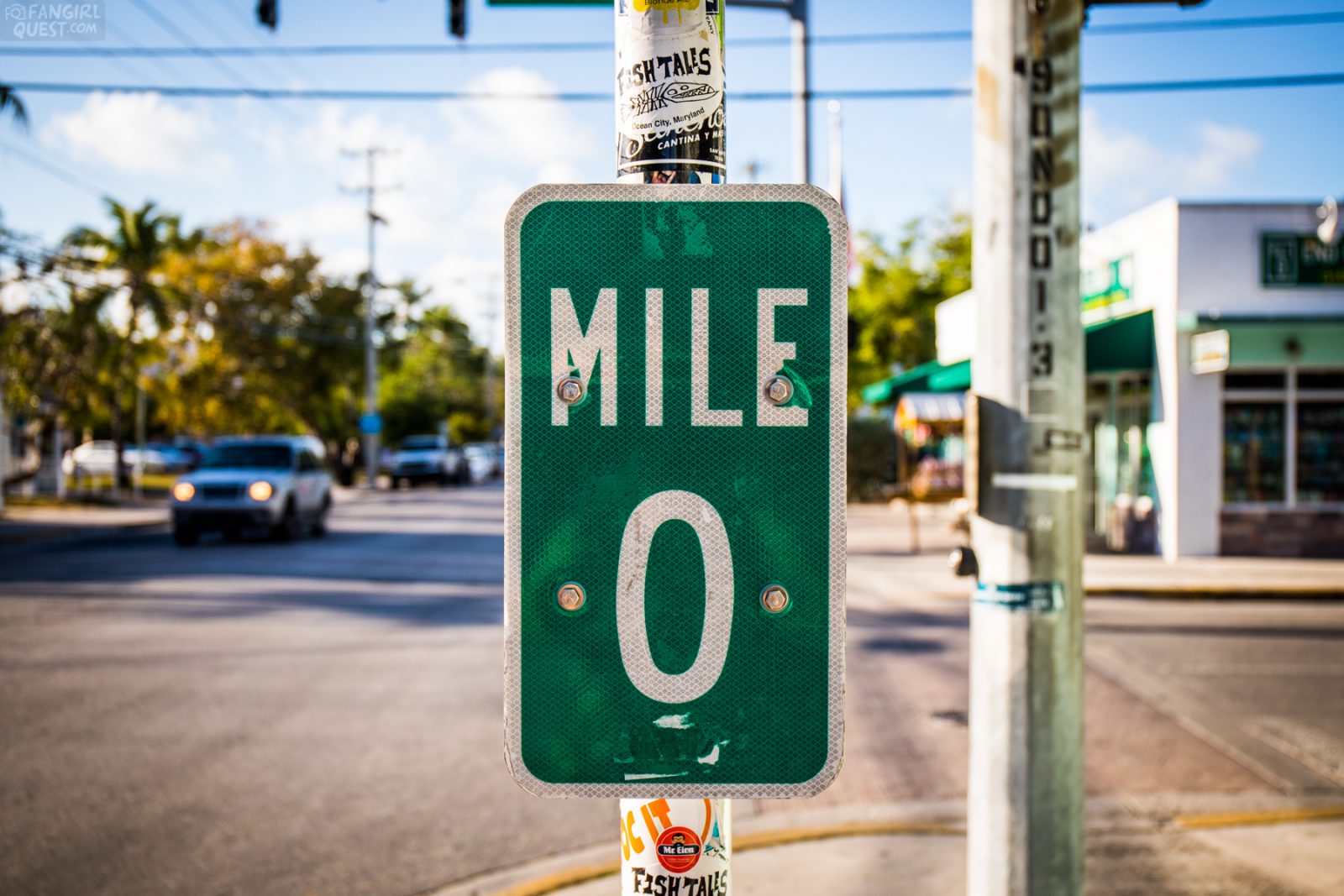 Ok, so the sunset celebration is an actual thing in Key West: people gather to a place called Mallory Square. There’s drinks, there’s street food and there are street artists. Basically, it is just generally agreed that this is the spot where to watch the sunset in Key West. Totally a thing. 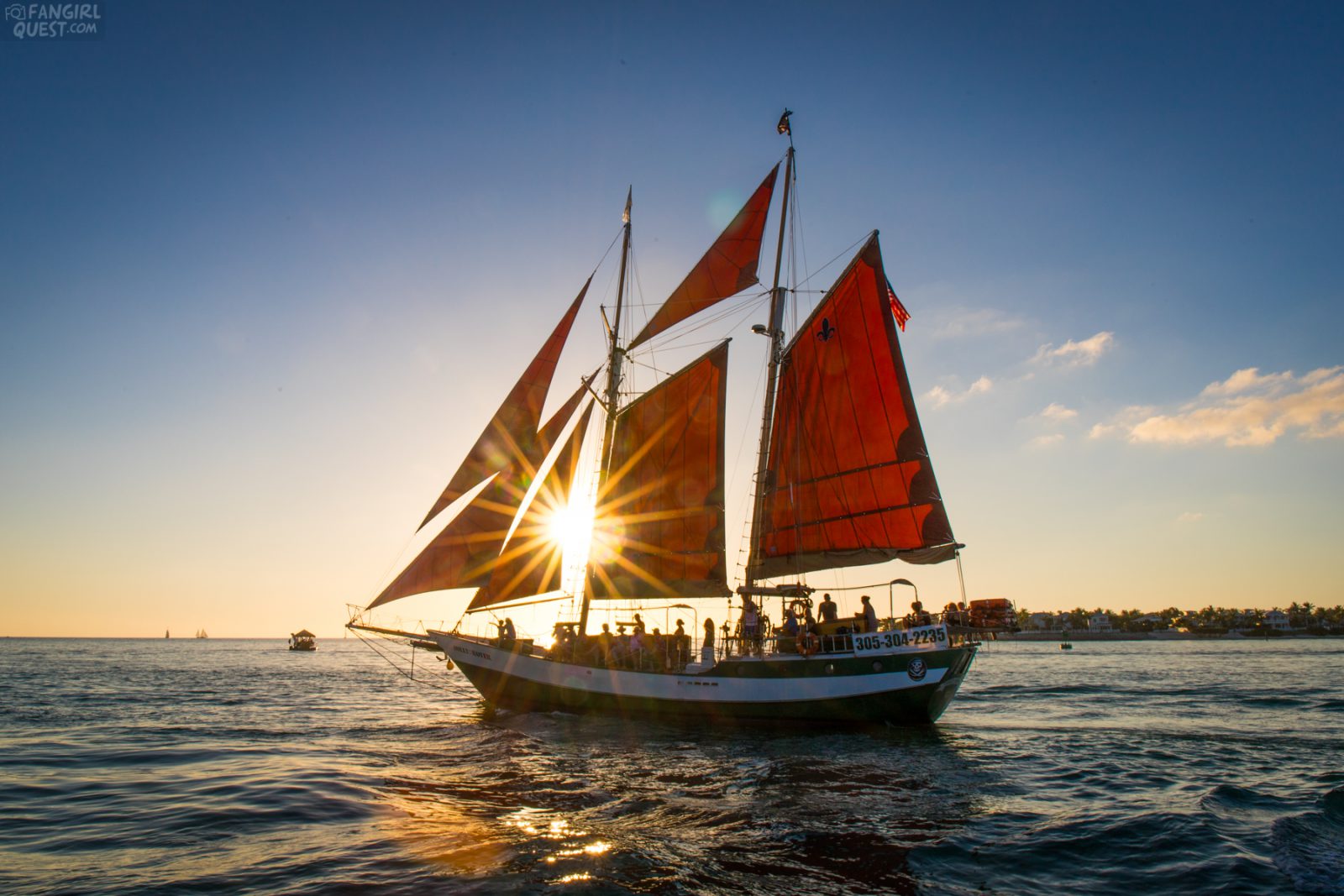 And we have to admit, it was pretty awesome. There’s this relaxed, friendly, touristy (in a good way!) vibe to it all. For once, one doesn’t feel overcrowded by the masses, but rather surrounded by friendly strangers in a very beautiful place.

We sat there for at least an hour, just watching the sun go down and finally disappear behind the horizon. We saw folks drinking cocktails out of pineapple halves, we saw many, many different kinds of street artists trying to earn their paycheck by performing fun and even daring tricks on every corner of the square. 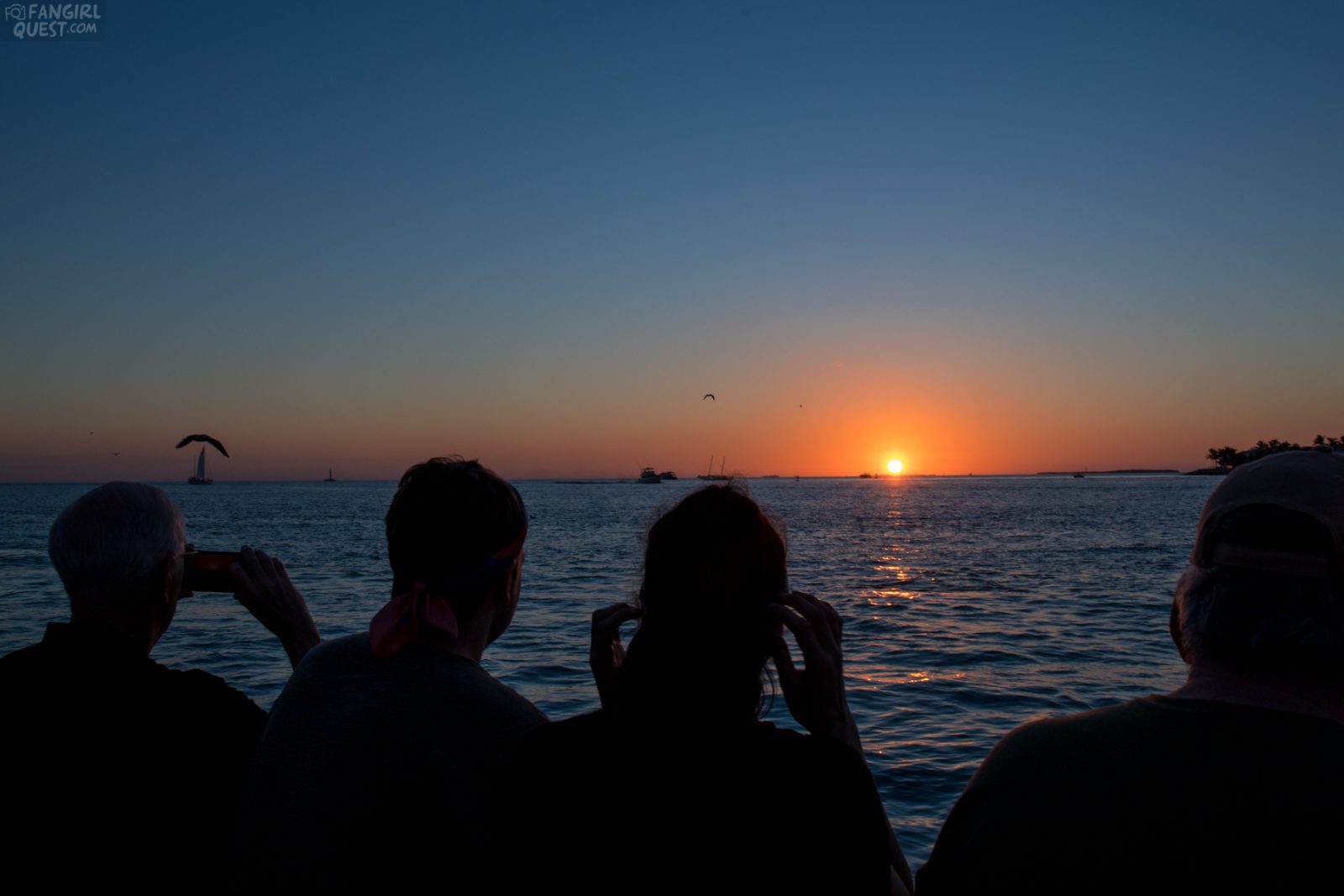 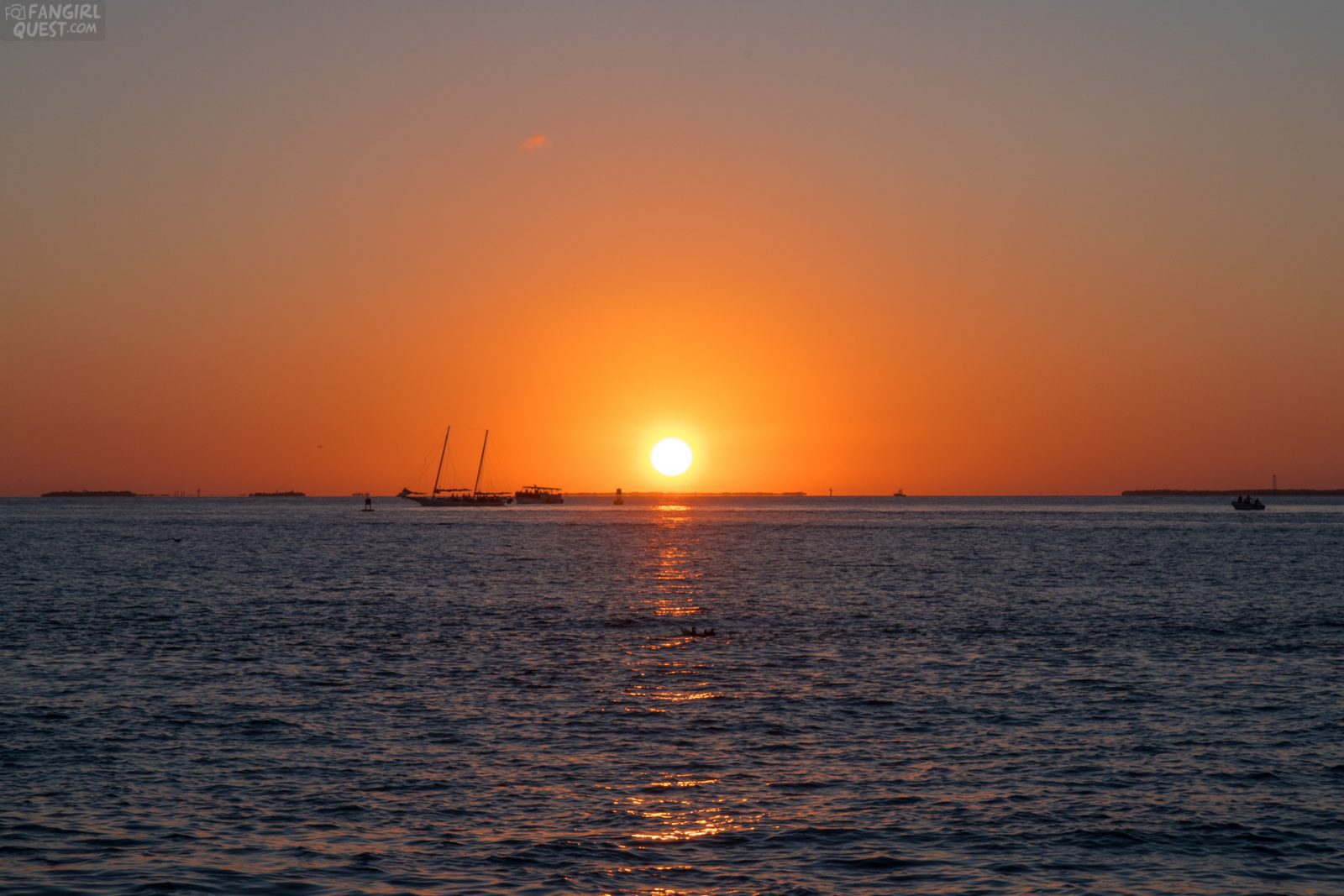 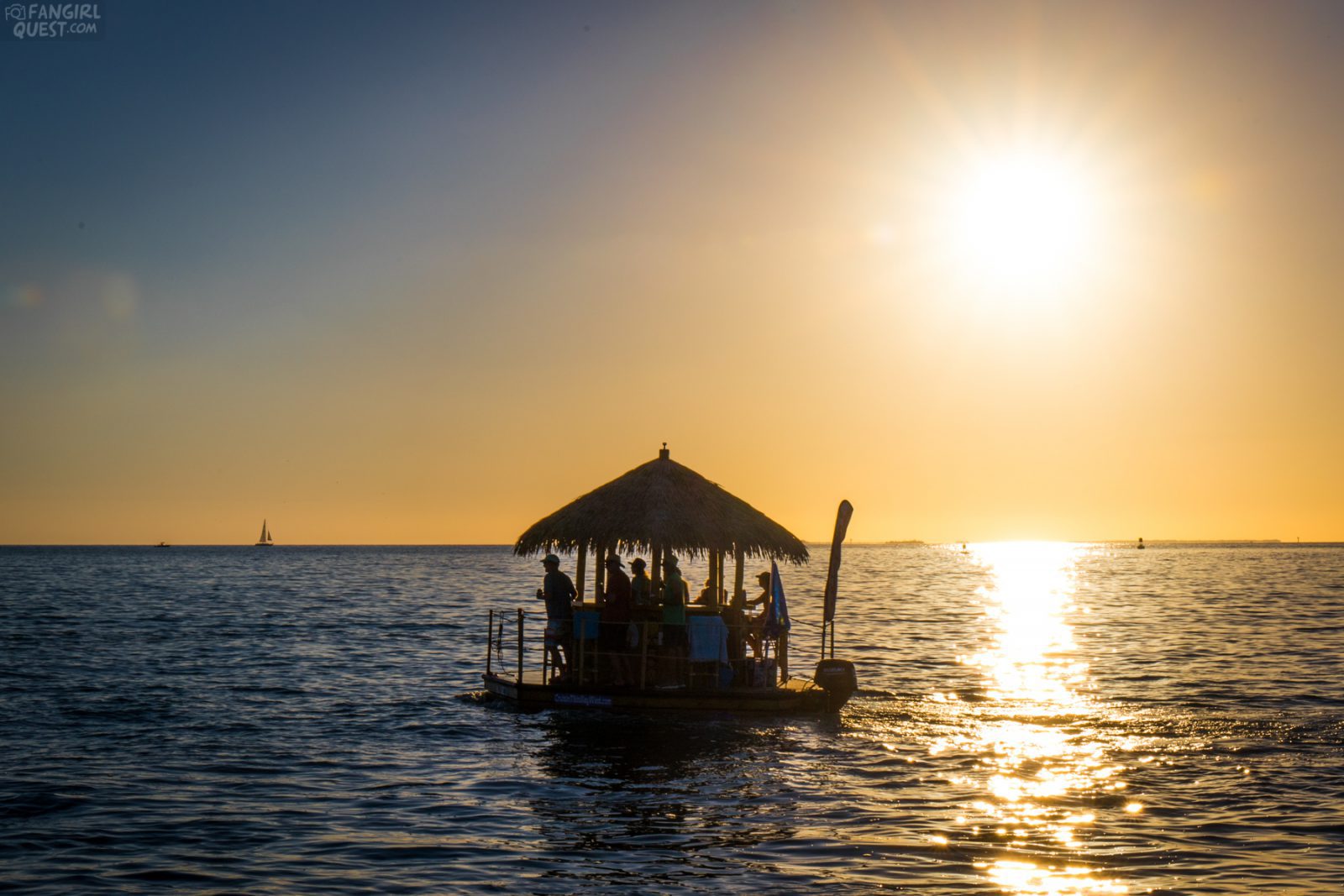 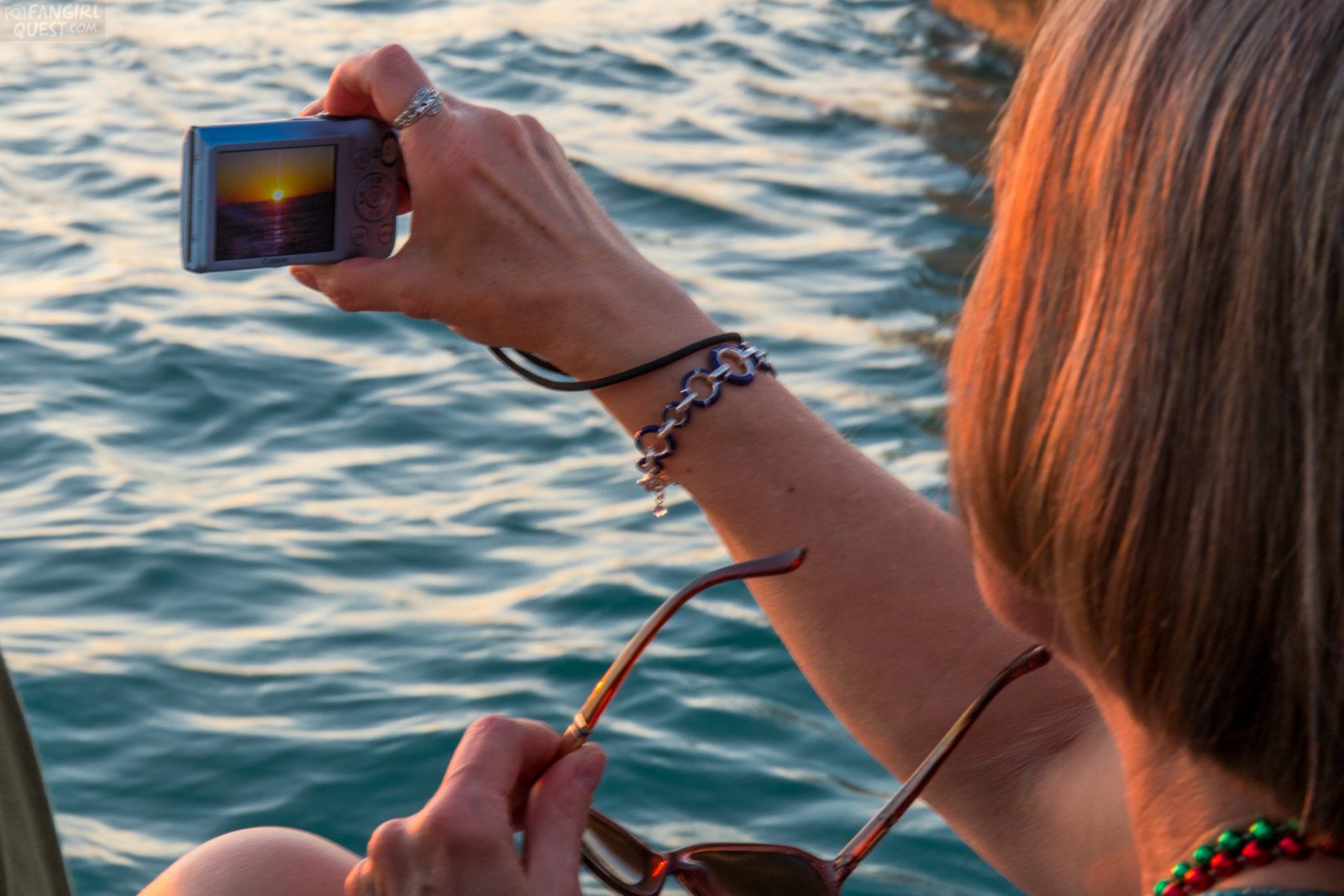 This one particular guy caught our attention and we stood there watching his highly entertaining routine for a good while. We didn’t catch the name though, so if anyone recognizes him, please let us know! We’d love to send him the link to these photos and a huge thank you from two strangers who couldn’t tip very much due to very limited travel budget ❤ 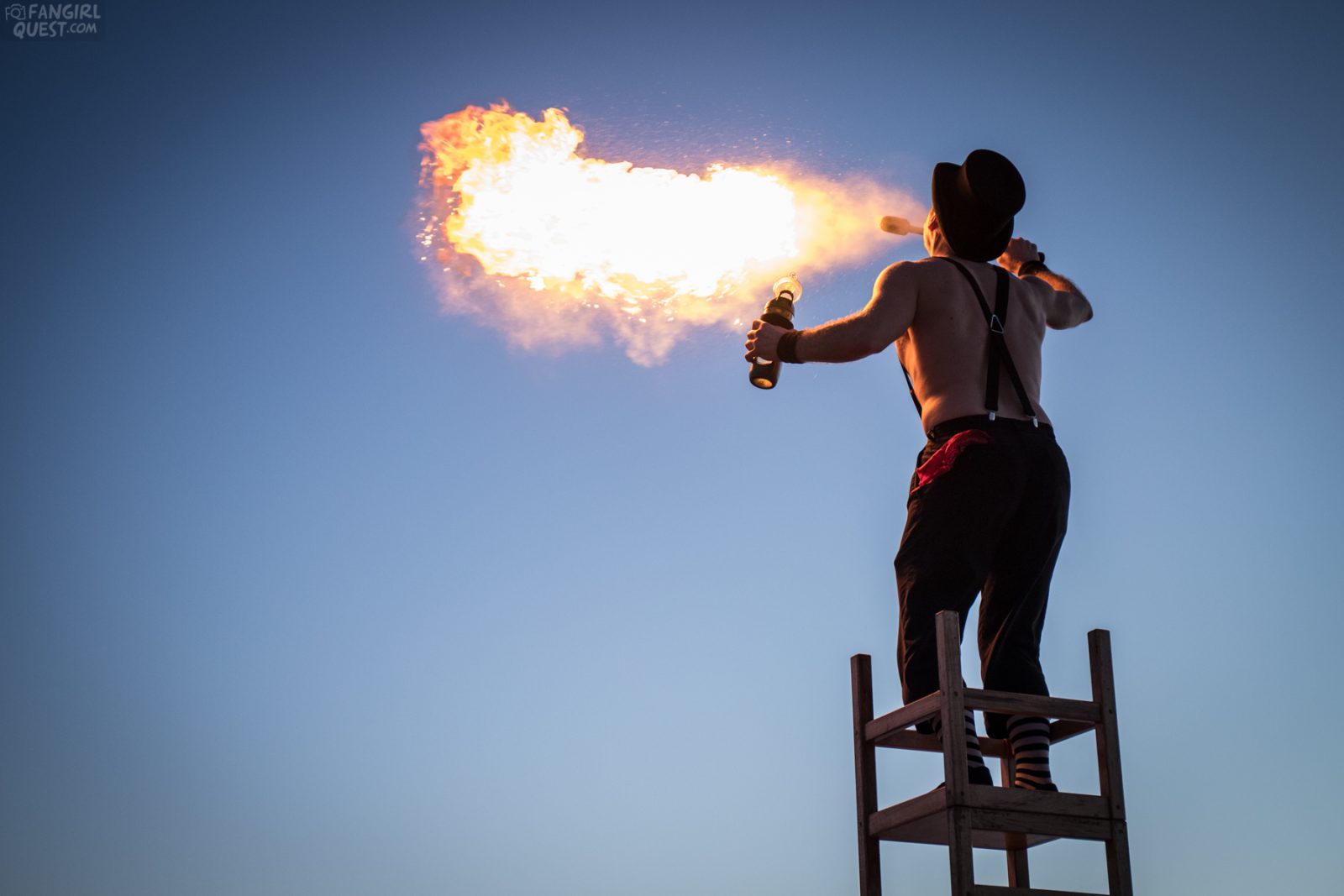 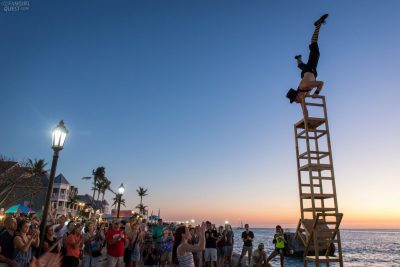 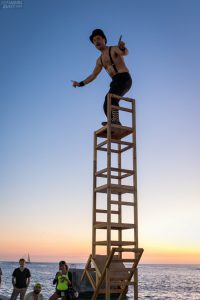 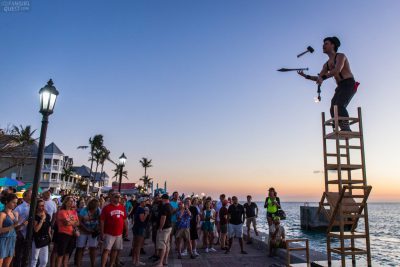 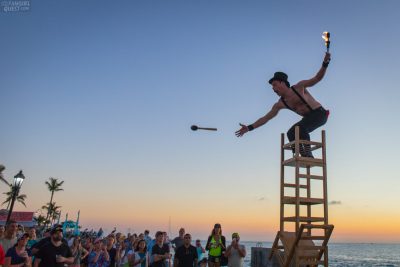 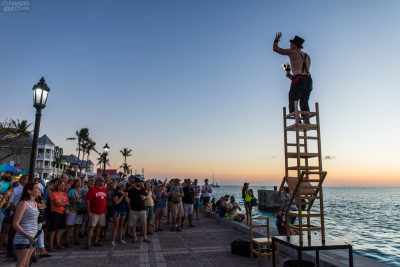 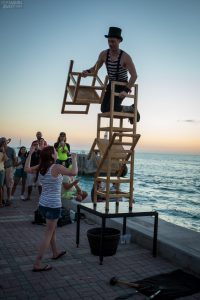 At this point, we were supposed to go back to the pubs and get a little tipsy, but we were already so tired from the huge portions of food and the couple of strong drinks, that we decided to head back to the hotel. Wow, so ridiculous ? I mean, I swear there was a time when we could party all night long and be fine with 4am bedtimes. It seems those days are gone now and we’ll forever be traveling back to our comfortable beds at 8:30pm. 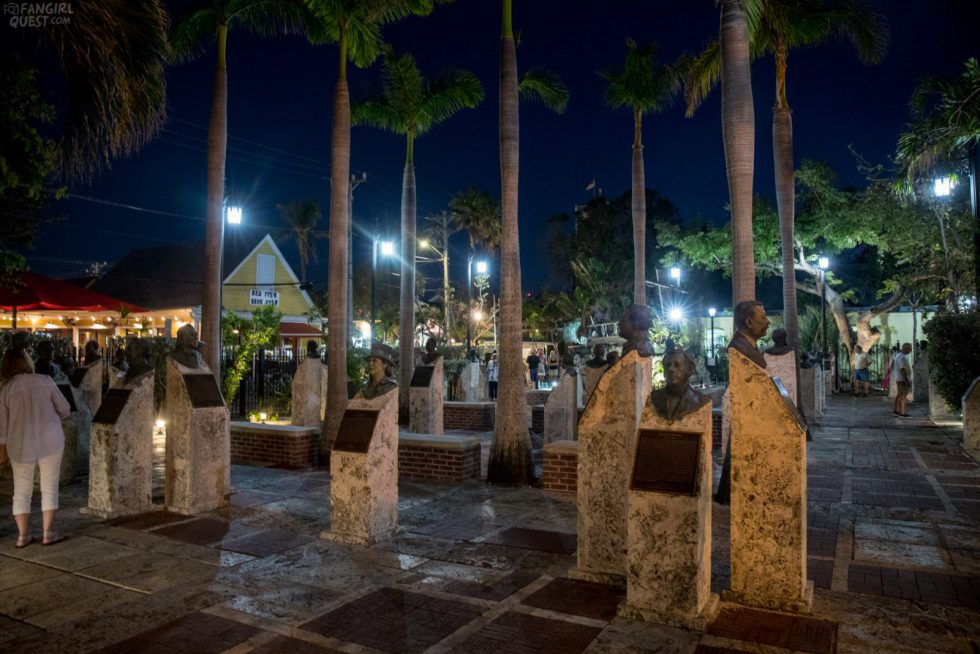 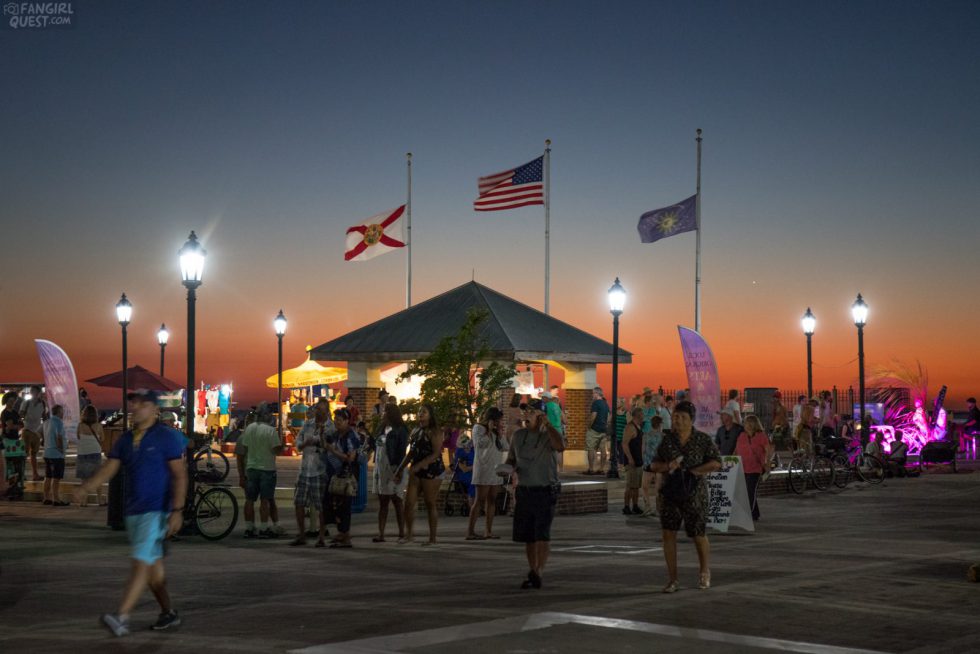 Oh, but before we say bye bye to this post describing our days in Key West, we need to look at our choice of desserts. Which we were finally able to consume about 3 hours after the Sloppy Fries. 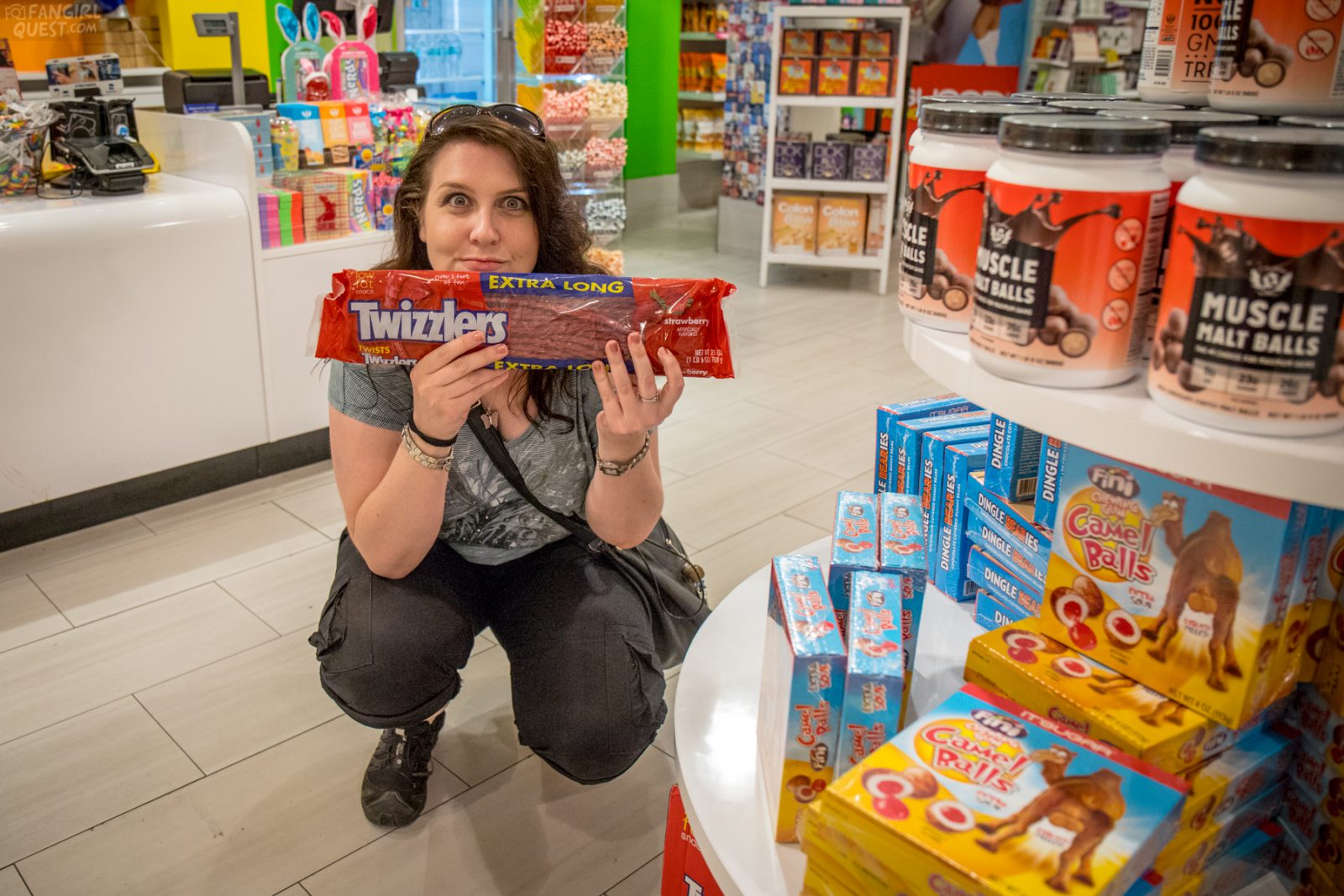 And here’s Satu’s key lime pie from a place called Key Lime Pie Co. It was very good. I had the strawberry version and I will miss that particular flavor here in cold, cold Finland forever. 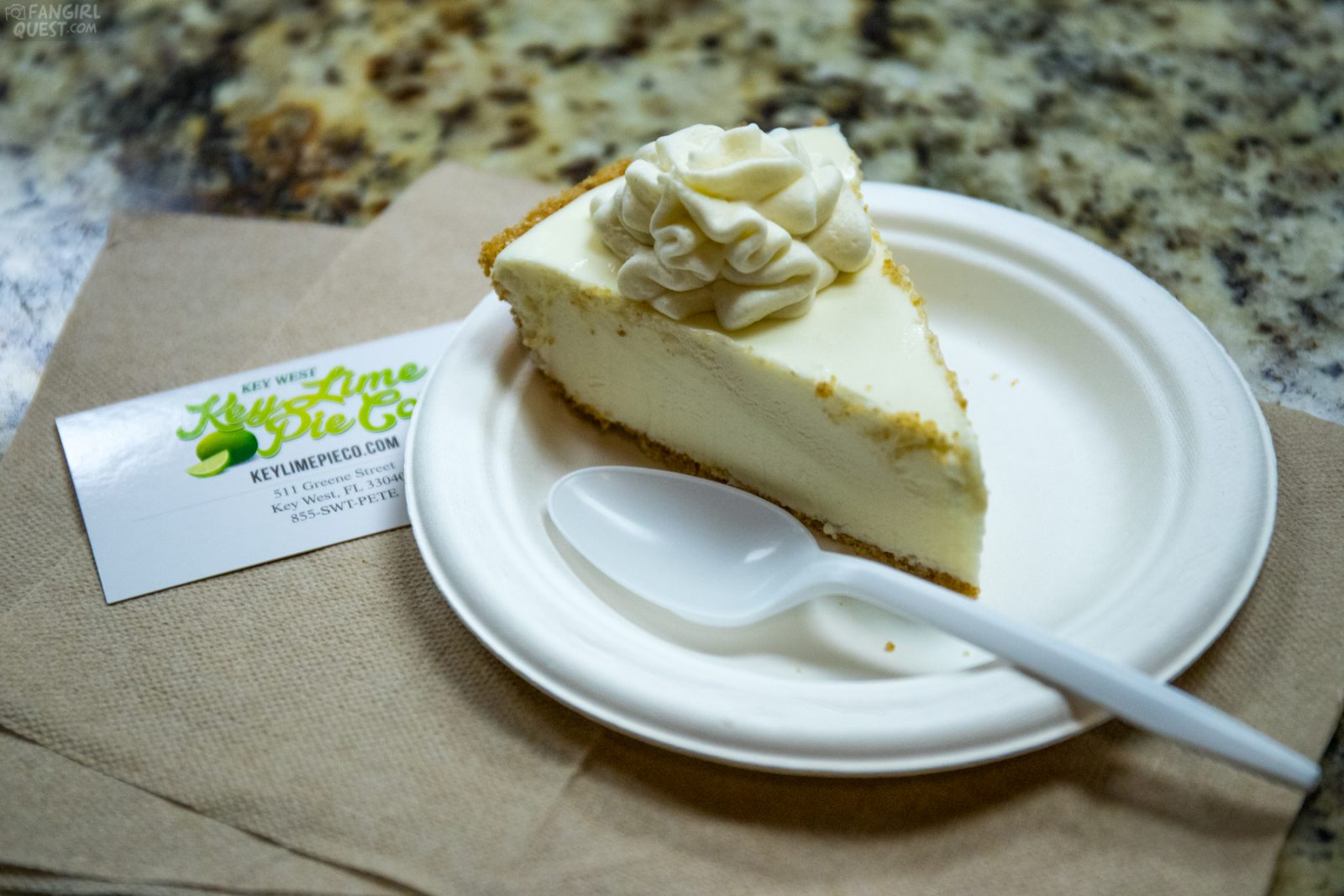 Interested in visiting Key West for the sunset & cocktails?

KLM Royal Dutch Airlines flies to Miami directly from Amsterdam. From Miami, we absolutely recommend renting a car to get you to Key West, because the drive itself is worth your consideration and time! 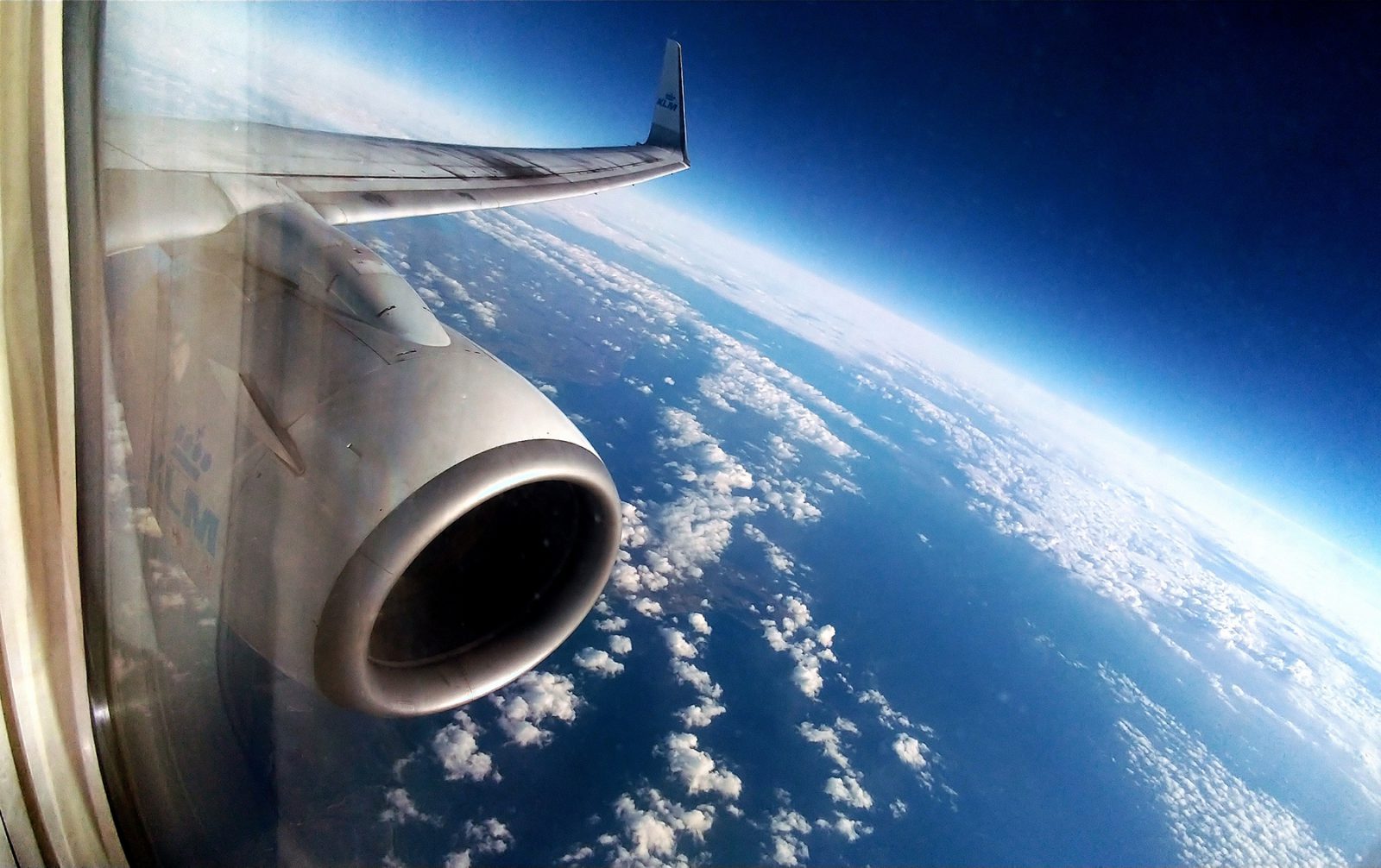 This is a collaboration post: Parts of this trip were done in collaboration with KLM Finland and Hertz UK, but all the routes, destinations, photos, content and opinions are our own!