The Best Views In London (With Photos!)

A Goodbye To Vancouver Sunsets — So Sad To Go

We keep repeating it, but that’s just because it’s true: we love Vancouver. It’s kind of ridiculous (because who loves a city this much?!), but there’s no going around it. We’re sort of truly and irrevocably lost our hearts to this gem located in British Columbia, Canada.

This time, we had eleven days to explore and to enjoy everything Vancouver has to offer. We said, “that’ll be plenty, we’ll get so much done and we’ll see so many filming locations!” but as usual, we were wrong. Eleven days is not “plenty” and there’s always so much more that we’d like to do and see whenever the departure date approaches.

Knowing (from two previous trips) that it would break our hearts to step on the plane that carries us away, we decided to give Vancouver a proper goodbye. So, we went and wept on a beach in the sunset.

A hotel stay near the airport

For the last few days of our stay in Vancouver, we had a lovely family suite at Pacific Gateway Hotel at Vancouver Airport. For us, it was all sorts of perfect as we had a few filming locations to explore nearby and really loved having all that space and great beds for proper sleep.

We were already sort of exhausted by jetlag, long hikes in Alaska before arriving in British Columbia and not sleeping that well, so we reaaaally needed a good night’s rest (or a few of them!) 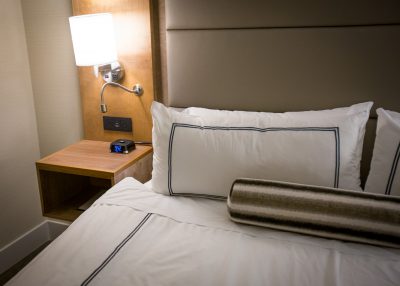 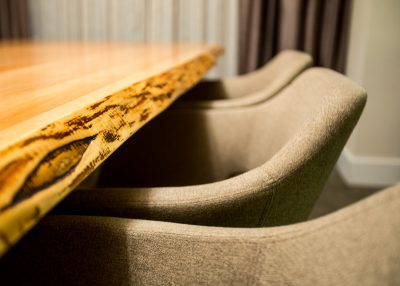 Loved the materials used in our room! 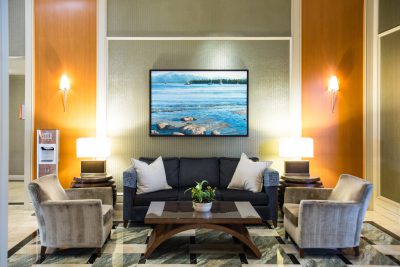 Comfy things in the lobby.

On our last full day we met up with one of our lovely Gishwhes team members and spent a fun day roaming the city together. We took one of our favorite flights ever (FlyOver Canada), and drove around looking for Ryan Reynolds. But not just randomly: they were actually filming the sequel to Deadpool in Vancouver at the same time we were in town. All we spotted was the biggest movie set we’ve ever seen, though: no Ryans, no actual action. Just stuff, equipment and things.

We ate a very unhealthy fastfood lunch downtown, admired the seaside views and giggled about our Gishwhes week and all things related.

After various adventurous stops around the city, the evening finally came, we said bye bye to our guest star and went back to our hotel to pack and get ready.

Except it was all sort of hard when we were feeling so miserable about leaving in the first place. We were both just throwing stuff around, pretending to organize it but really just walking around in the room like zombies. How was it all over, again?

Finally, one of us gave up and came up with a last minute idea.

“Want to go and watch the sunset?”
“Yes, please. Let’s go. We are NOT spending the last evening in our rooms.”

Originally, we just wanted a beach, any beach for watching our last sunset in Vancouver (for now!), but accidentally drove to a pretty cool one. Iona Beach Regional Park is a part of a place called Iona Island and features quite an unusual and awesome route for long walks on the beach: the Iona Jetty juts out 2.5 miles into the Strait and is a popular spot among walkers and cyclers.

Sadly, we didn’t have time to walk the length of the jetty, but that was alright. We were pretty busy watching the sunset feeling quiet and melancholy.

There were tons of people there that night, some snapping photos of the gorgeous sunset and some walking by towards their cars before the gates were closed for the night.

The air got chilly quite quickly, so we didn’t stay for too long. And even though we still had plans to visit another filming location in the morning, this really felt like the perfect goodbye.

It’s a weird thing, getting so attached to a place. It doesn’t always happen, but sometimes it hits you so bad that you really have no other option than to spend more time in said place. It’s pretty hard to say what it is exactly that makes one want to stay for good and never go back home again, but there really is something about Vancouver that does exactly that to both of us.

Something so good that saying goodbye is really bad.

Next morning, we finished packing our bags, had a lovely Pacific Gateway buffet breakfast and drove to the airport. We dropped off our loyal Hertz car…

…and decided that one day, we’ll live in Vancouver.

If not forever, then at least for a year.

Because hey, who knows? Maybe some crazy dreams are meant to be dreamed… and actually do come true after a while.

Partial collaboration: For most parts, we carried out this trip on our own, but we did have a little help along the way: a big Thank You to our dear sponsors KLM Finland and Hertz for helping out with the transportation. Thank you Pacific Gateway Hotel at Vancouver Airport for hosting us during our farewell nights.