On Seward HIghway, the views just keep on coming.

We’ve done many scenic drives during our travels but not many of them can compare to the absolutely stunning vistas of the Seward Highway. It stretches 125 miles south from Anchorage to the town of Seward. There’s loads to see along the way and Seward at the end of the Highway is one of the most picturesque towns we’ve ever seen surrounded by some of the most incredible views. There are only 31 designated All-American Roads in the US and to qualify as one, the road has to have features that do not exist elsewhere in the United States and are unique and important enough to be tourist destinations unto themselves. It’s not hard to see why Seward Highway has made the list. 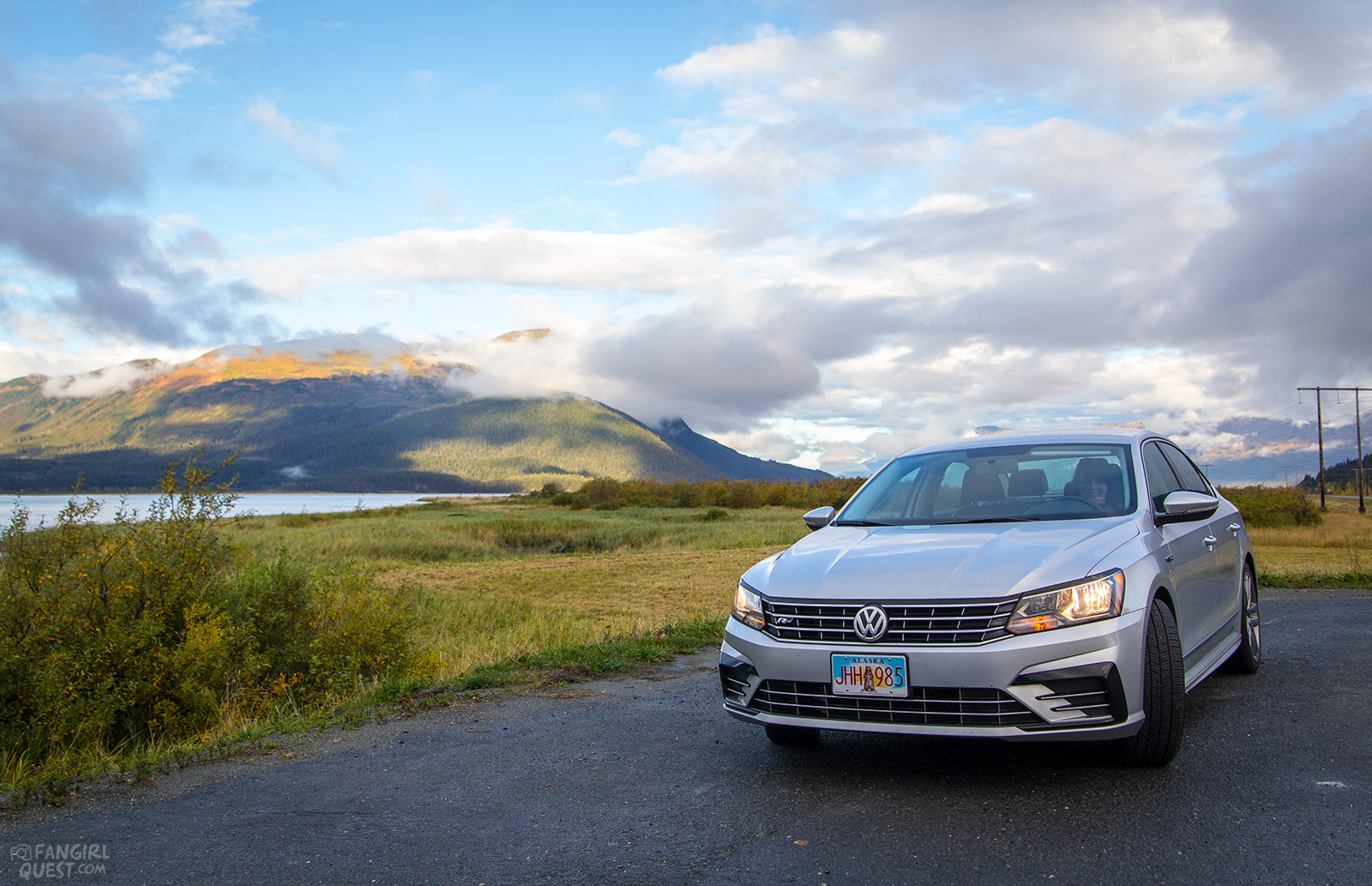 Trust us, to truly see Alaska, you need to get out of the city and onto the road. 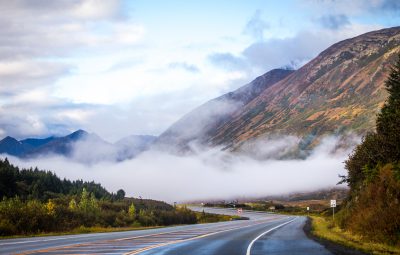 On Seward HIghway, the views just keep on coming. 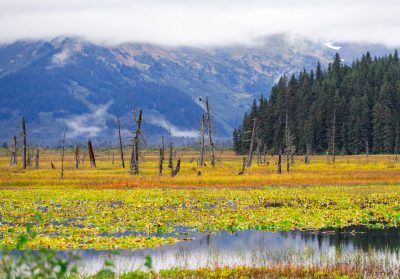 Alaska is also paradise for any wildlife lover: this bald eagle was just one of the many animals we encountered in the wild. 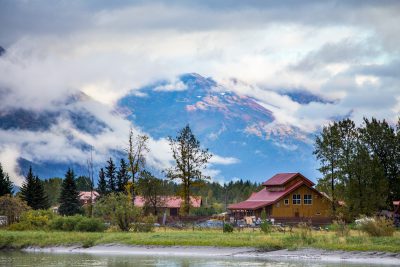 Just a short drive down from Anchorage you reach the shores of the Turnagain Arm. The road runs right next to the water, hugging the shoreline of this shallow bay surrounded by mountains on either side. Low tide turns large areas of the bay into deceptively dry-looking mud flats but don’t be fooled; the mud flats can be like quick sand and people have actually died getting stuck in the mud and the tide rising. So stick to actual dry land and heed the warnings: no walking onto the the mud flats. Another warning for travelers is to make sure your tank is full. There is a gas station in Girdwood about 40 miles from Anchorage but after that, there are no services until you reach Seward. 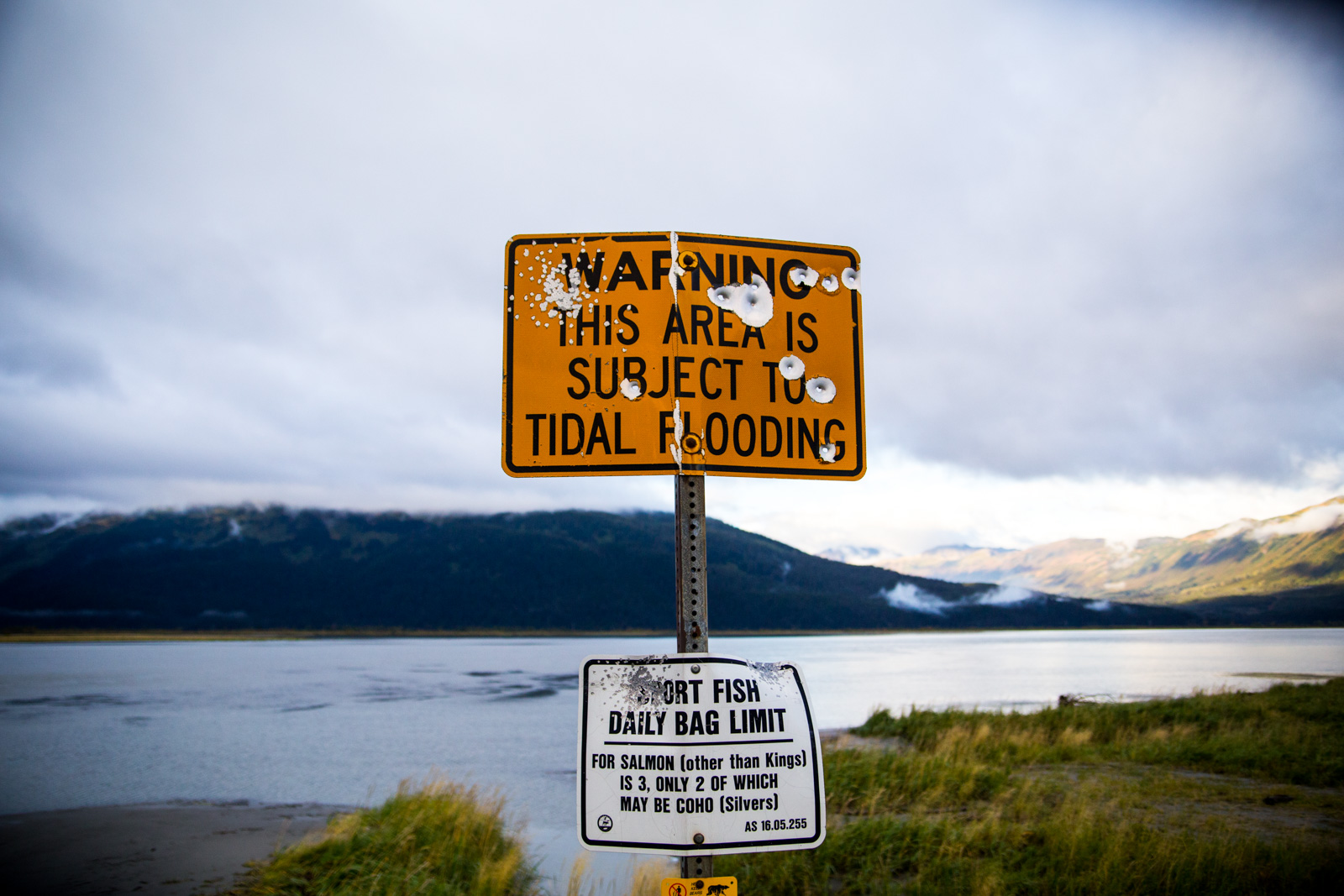 They’re not kidding about the flooding…

Before driving down the Turnagain Arm make sure to check out tide times, not just to avoid the danger but to see the bore tide. This natural phenomenon of sea water rushing into a narrow bay or outlet occurs all over the world but there are only a few places where it’s big enough to make a name for itself – and this is one of those few. The Turnagain Arm bore tide is also one of the most easily accessible in the world. Thanks to the road running so close to the shoreline the wave can be seen pretty much anywhere along the way and there are plenty of stops along the way where you can park your car. When checking times, keep in mind that they are estimates at best, as we learned the hard way after missing the bore wave twice in as many days… 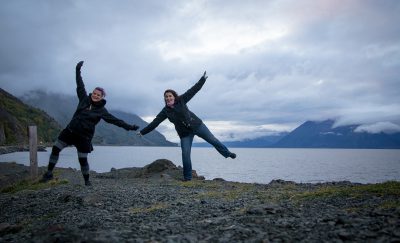 Fangirl Quest shenanigans at Beluga Point, our first stop on the Turnagain Arm 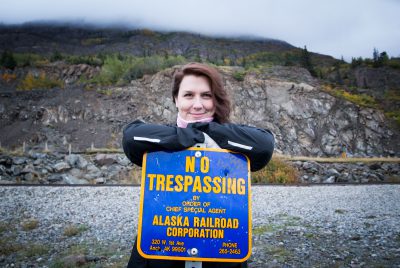 Watch out, we’ve got a badass over here!

Even after the wave has gone, you might want to stick around to catch sight of some beluga whales in the wild. They usually follow the bore tide to feed on fish driven up by the wave some half an hour later, though it can take a bit longer than that. Patience is a virtue when whale-watching so make sure you have warm clothes, some drink and snacks and good company. A beluga AND a seal in the same picture? Come on Alaska, now you’re just showing off!

On our first day we sat and waited patiently for about 45 minutes, hoping to see the milky white backs or sprays of water pop up. We’d already given up on seeing the whales on that day and heading back to the car, when I turned around wistfully to look back at the scenery just one more time – only to see a spout of water in the distance! What followed was an amazing show. The belugas didn’t just swim by, they actually spent at least a good half hour feeding in the bay next to us, popping up every few minutes. 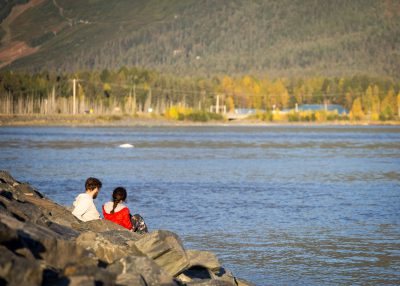 The locals know the best spots to catch the whales. 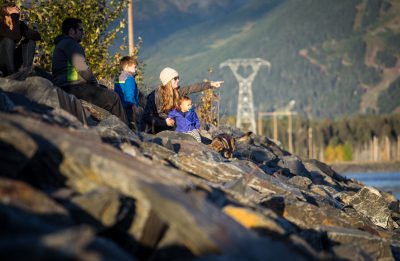 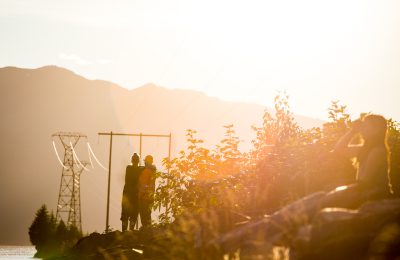 The sunset was not too shabby either.

At the bottom of Turnagain bay – the armpit if you will – is the Alaska Wildlife Conservation Center. This sanctuary for wild animals is dedicated to preserving Alaska’s wildlife and they do so not only by taking in and rehabilitating individual animals back into the wild but also through research and education. We were particularly impressed by their massive effort to re-introduce the American Woodland Bison back into Alaska. While visiting the only currently captive herd of wood bison in the US, I also discovered that apparently, I’m allergic to bison. Who knew! 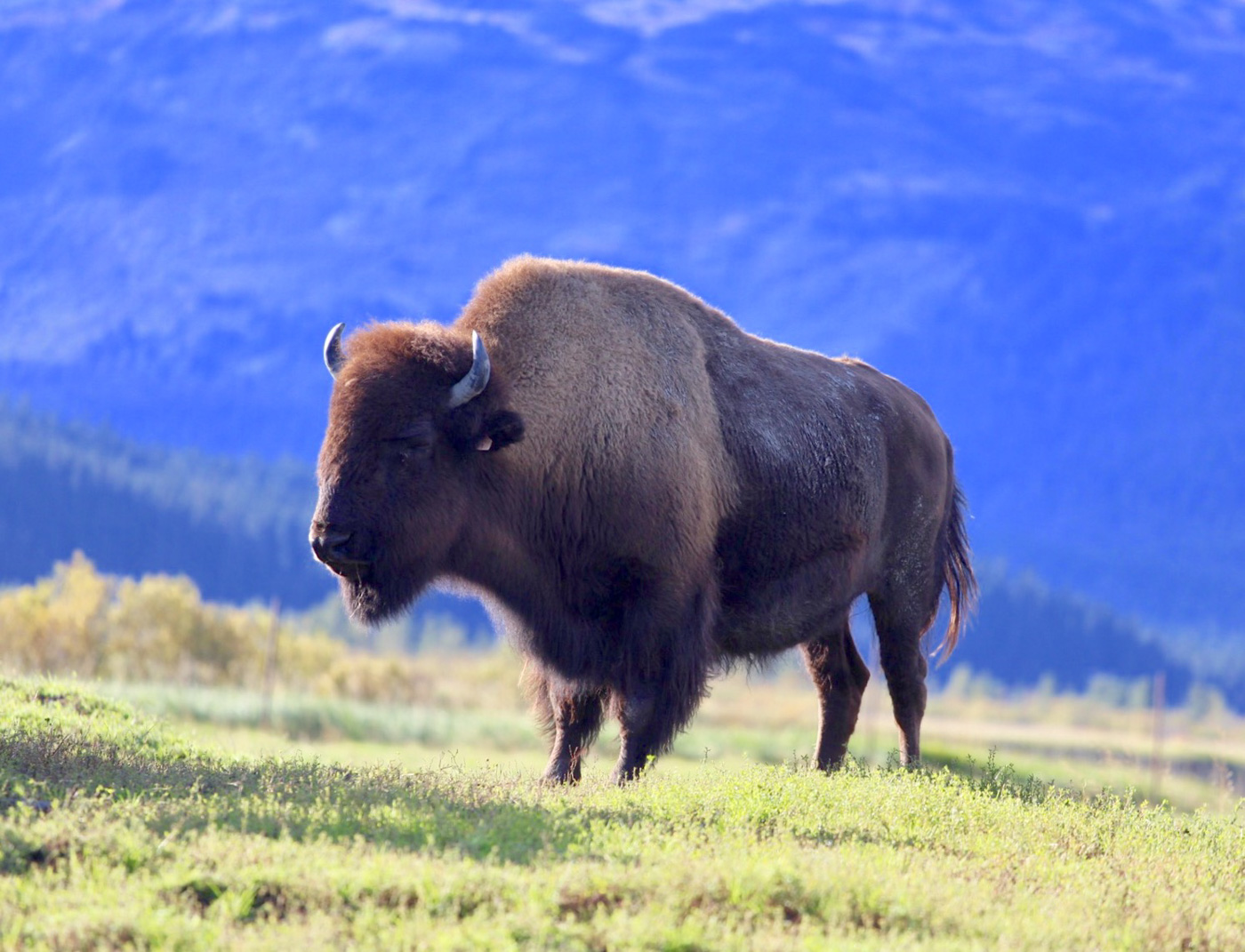 There’s more to the wildlife center than bison though, as we discovered while roaming around its massive grounds. We visited wolves, moose and foxes but the most amazing encounter was with a bathing grizzly bear! It was almost as if it knew the tourists were watching and put on a show, just for us. You can see the full gallery of the residents of the wildlife center here. 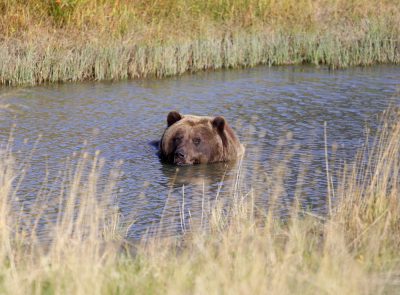 A bear having a bath at the Alaska Wildlife Conservation Center. 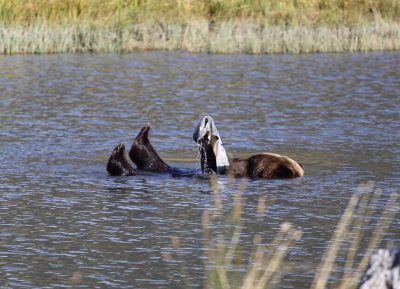 Leaving the flat roads of the Turnagain Arm and continuing on Seward Highway across the mountains, the views don’t get any worse. Every turn brings another breath-taking mountain scenery and the fall colors only made it better. Taking in the scenery Reflections along the Seward Highway

Not the worst place for a cabin.

Just a few miles before reaching Seward we took a detour from the main road to go see Exit Glacier. While you can see the glacier in the distance already from the road, it really is worthwhile to hike the little less than a mile to see it up close. Keep in mind the terrain is a bit rough and there are a few steep climbs up rocky stairs, so good shoes are essential. Exit Glacier is quite impressive up close. Hiking up to Exit Glacier The rocky outwash plain can get flooded, but during low water levels you can walk up to the toe of the glacier.

Sadly you used to be able to see the glacier a lot more closer just a few years back. Along the trail that leads up to it, there are posts every now and then that have a year carved on them. The signs are an indicator of how far the glacier used to stretch at that time, and seeing the distance it has receded in just a few years is quite daunting. But hey, there’s no global warming right….? In just seven years the glacier has receded a considerable distance – and the signs continue all the way to 19th century and a lot further from the ice.

The end of the road

We ended our scenic drive in Seward. Now Google may tell you it’s a 2,5 hour drive but don’t be fooled. There are so many scenic stops and things to see along the way that you’re better off reserving an entire day for the drive there and back. Situated at the head of Resurrection Bay on the Kenai Peninsula, Seward is the ideal starting point for cruises and tours that explore the area. Sadly we only had time for a quick stop but hopefully, we can come back some day and really experience all this town has to offer. After enjoying some local delicacies at Subway, we admired the view from Hoben Park and even spotted a seal in the ocean before heading back to Anchorage. The waterfront park has a memorial for John Ballaine, the founder of Seward. Seward harbor is filled with boats of all shapes and sizes.

The views from Hoboen Park are stunning.

For most parts, we carried out this trip on our own, but we did have a little help along the way: a big Thank You to our dear sponsors KLM Finland and Hertz for getting us to Alaska and helping us experience the best it has to offer.