Helsinki Movie Locations: Some Of Our Famous Neighborhoods

When most people think of traveling to the US, they think of places like New York, Los Angeles, Las Vegas or the Grand Canyon, but during our trip through the northern states, we discovered there’s so much more to this diverse country. Minnesota was no exception, as we learned when we spent a week as guests of Explore Minnesota – and what a week it was!

We started our visit in Duluth, a port city on the western shore of Lake Superior. Neither of us had been to Minnesota before and since we’re both “collecting” states, we were excited to see the sign welcoming us to the state. Driving into the city across the bridge from Wisconsin we kept our eyes peeled and spotted the sign on our arrival into the North Star State.

Our hotel, Canal Park Lodge, was right on the waterfront at Canal Park, an old industrial area turned into a recreation district. I was especially excited about this because seeing Lake Superior meant we’d have visited all five of the Great Lakes, yet another travel goal checked off the bucket list. In addition to the great location, the rooms had lots of space and super comfy beds. The hotel also serves a nice breakfast, which is always great on the road as we can get an early start. 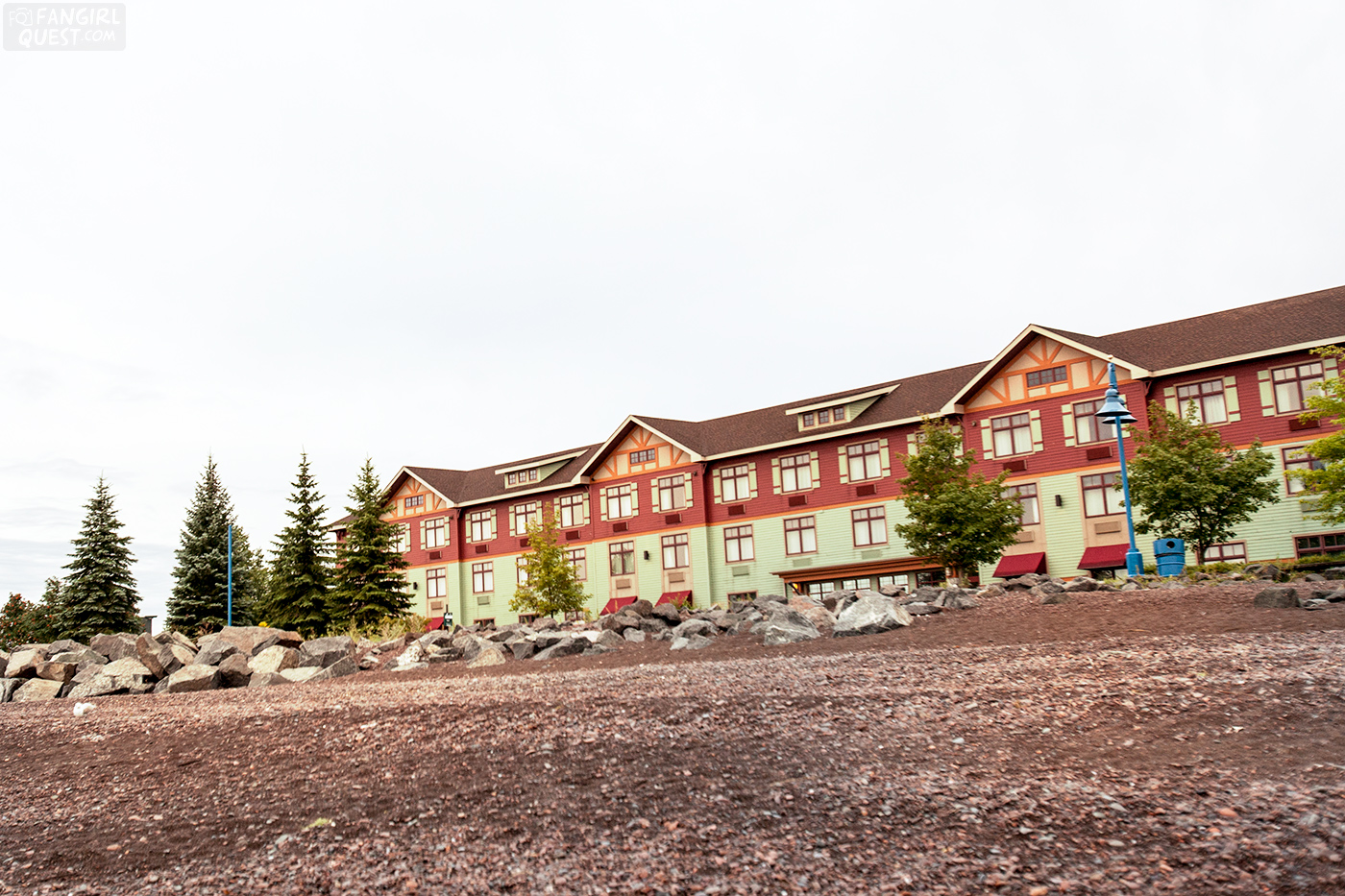 Canal Park Lodge on the shore of Lake Superior in Duluth

Set visit at the Cotton Mansion

After checking in and freshening up, we met our guide and soon to be new best friend Bob from Visit Duluth and in true Fangirl Quest style, headed straight to a movie set! Bob had arranged for us a visit on the set of the movie Virginia Minnesota, which was filming in a beautiful historic building called the Cotton Mansion. When it’s not serving as a filming location it’s a bed & breakfast, so you can actually spend the night at a filming location! Even though we don’t know much of the movie, it’s always exciting to see the hustle and bustle of an active set. The scenes they filmed in a smoke-filled stairway looked positively spooky and we can’t wait to see the finished product! 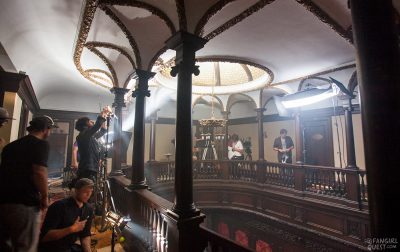 On the set of Virginia Minnesota at the Cotton Mansion 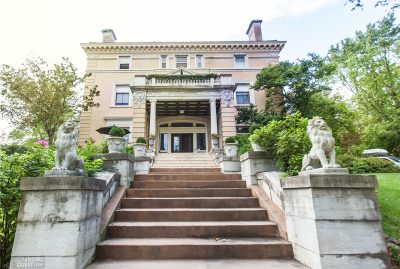 The Cotton Mansion is impressive also on the outside.

Drinks, dinner and a downpour

Now we rarely drink when we’re traveling. Our schedule is often just too hectic for a night out and we always want to get up bright and early to make as much of the day as possible. A friend asked how much is a pint of beer in Reykjavik and we burst out laughing because we literally have no idea. But sometimes, when we’ve been on the road for weeks and visited dozens of locations, we appreciate the chance to kick back and relax with a tasty drink. And there’s no better place to do just that than Vikre Distillery in Duluth. The family-owned business gets its inspiration and most of its ingredients from the woods of Northern Minnesota and the water comes from Lake Superior, adding to the local flavor. We sampled some of their tasty cocktails and even had a tasting of the varieties of their signature gin. 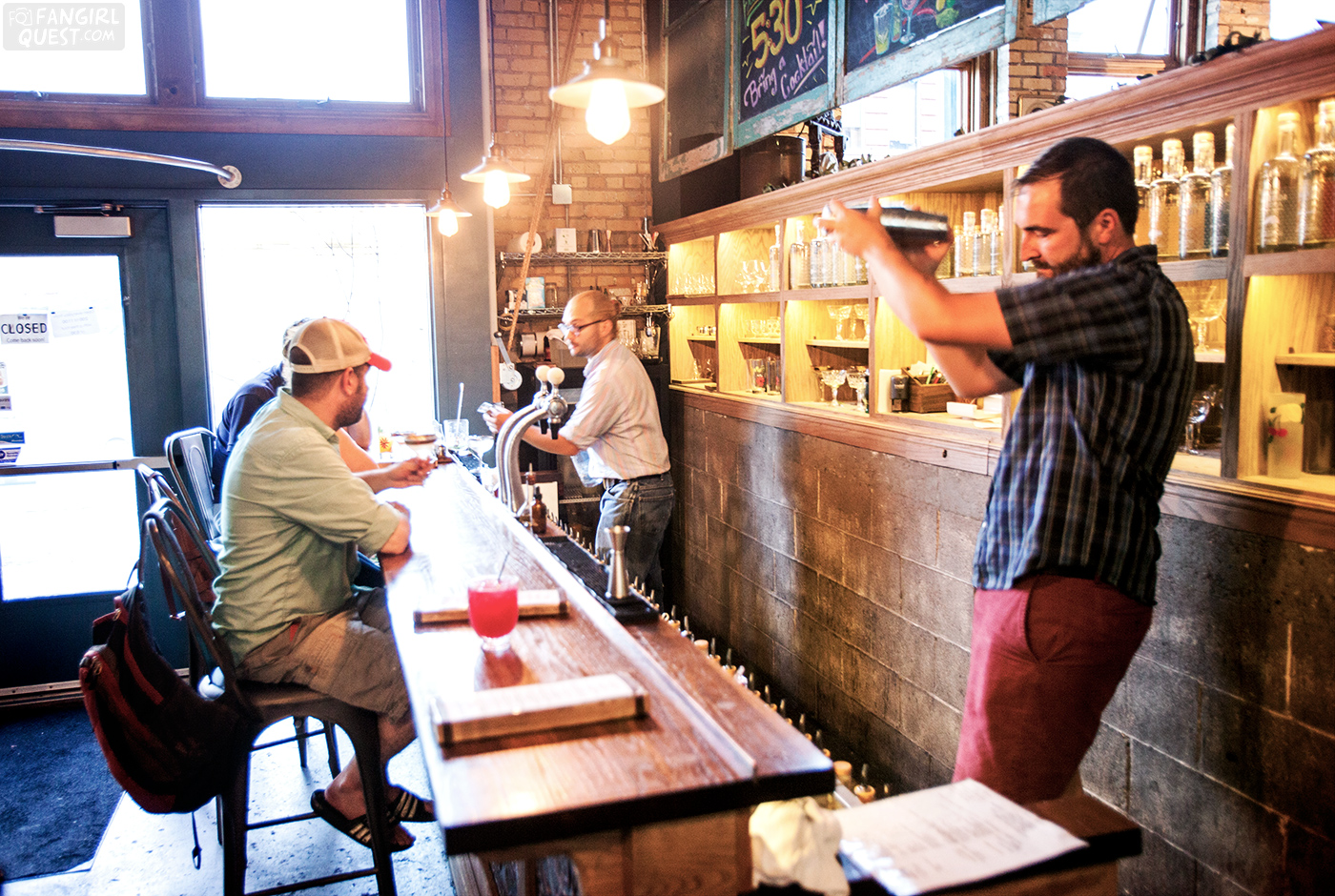 The talented bartenders of Vikre Distillery at work 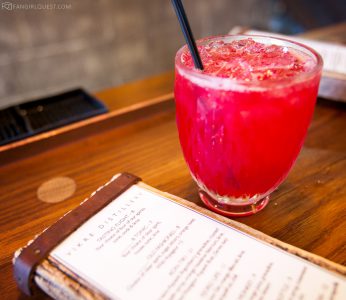 The Vikre cocktails: hard to decide which one to go for. 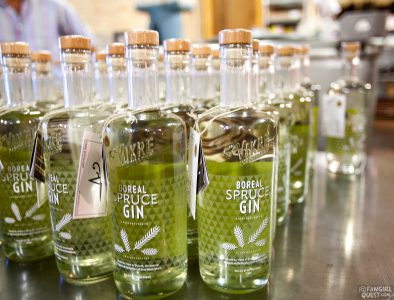 Vikre Distillery is famous for its gin which is flavored with wild botanicals. 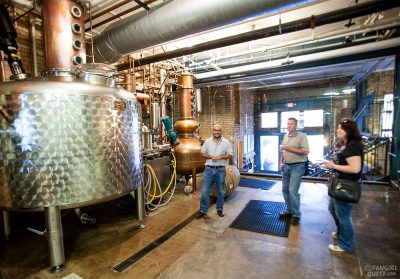 We even got a behind the scenes tour of the distillery! 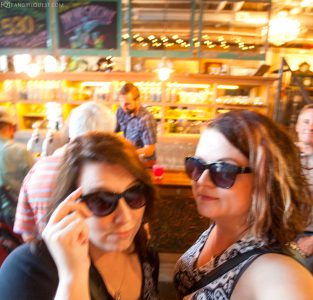 Keepin’ our shades on inside… Yes, it’s an Eric Paslay reference.

Not wanting to get too tipsy, we left Vikre to walk around the lovely Canal Park and to see one of Duluth’s landmarks, the Aerial Lift Bridge.  While we were admiring the bridge and snapping some photos, darkness had crept in and a storm was approaching. The lightnings over the city looked amazing and the bridge in evening lights is impressive but after a while it occurred to us that getting caught outside in a thunder storm might not be the best idea… We headed towards Bellisio’s, a lovely italian restaurant in Canal Park. Before we knew it, there was a torrential downpour of rain and by the time we got inside just a couple minutes later we were soaked! Luckily, that didn’t stop us from enjoying some delicious pasta and even more delicious dessert. 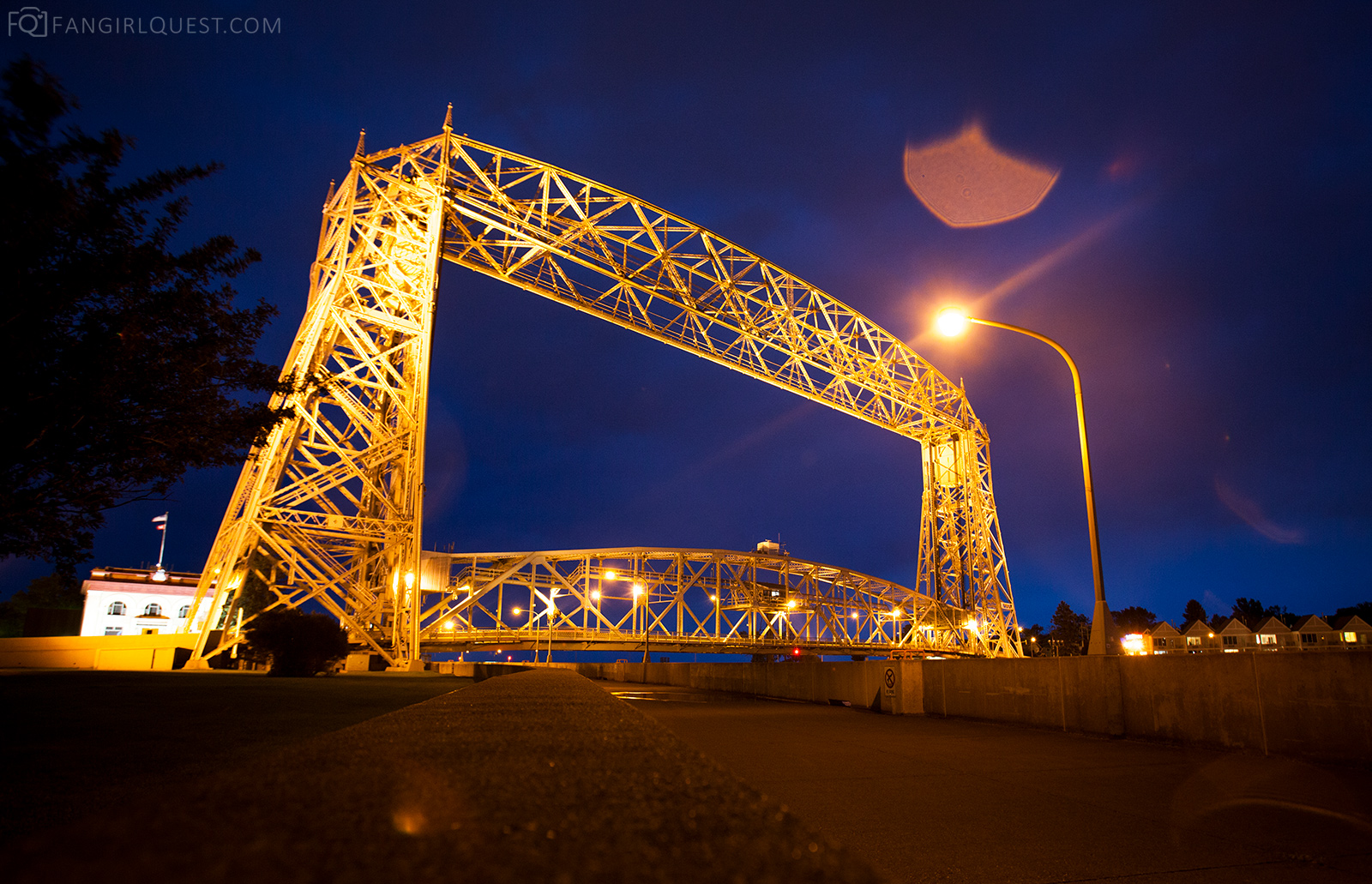 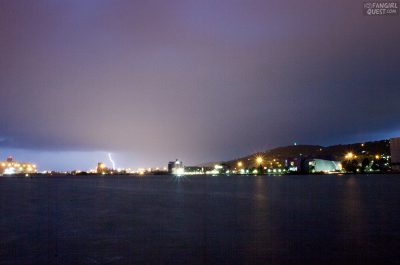 A thunderstorm over the city 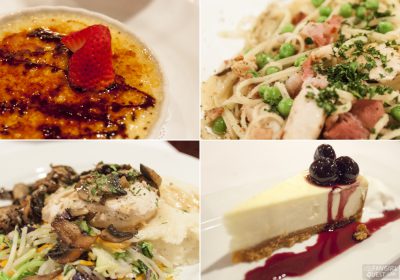 The food at Bellisio’s was worth getting soaked to get there!

In the morning we checked out some locations from the movie Iron Will before heading to the Nordic Center. Minnesota has the largest population of Finnish immigrants in the United States, and along with other immigrants of Nordic decent, they keep their heritage alive. The Nordic Center is dedicated to preserving and advancing this heritage by offering social, educational and cultural programs that serve the community. They also offer language courses, so you could even learn the weird and difficult language known as Finnish! 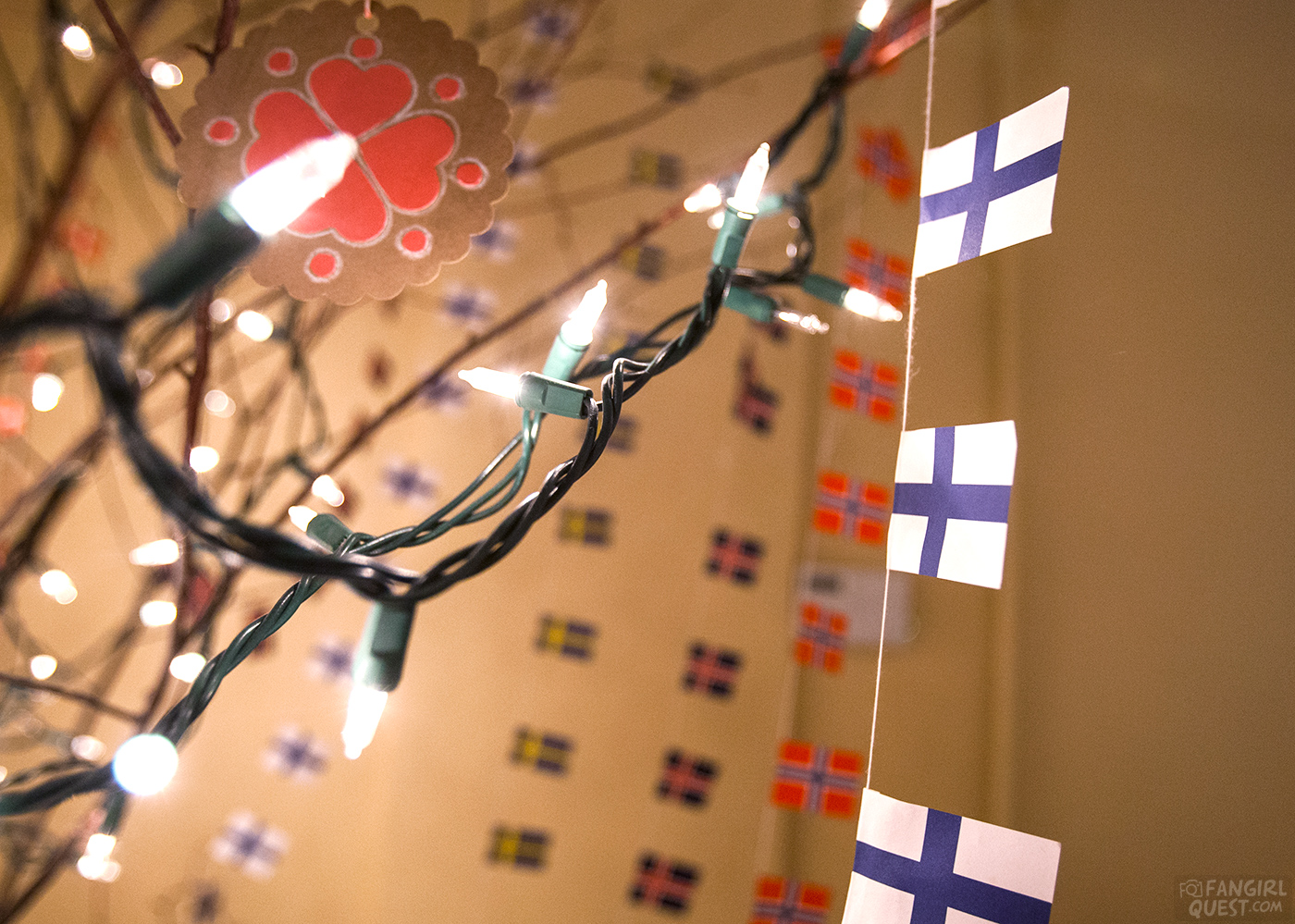 Finnish flags front and center at the Nordic Center 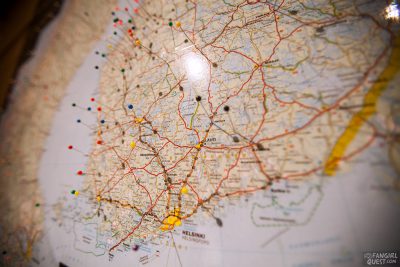 Visitors can mark on a map where in Finland they are from! 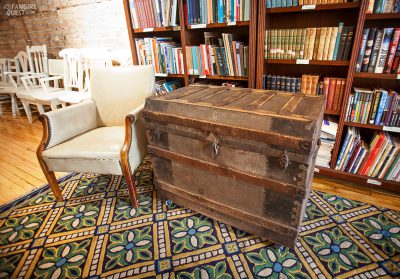 Most immigrants who came to Minnesota in the 19th century had all of their possessions in a travel trunk like this. 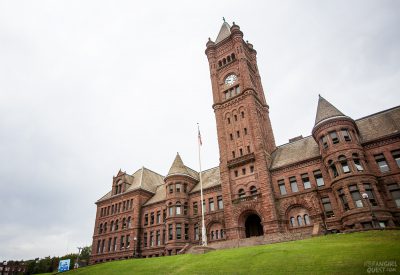 The 230-foot clock tower of the Historic Central High School is patterned after the Big Ben. The school was also a filming location for Iron Will.

We also stopped by the house that was Bob Dylan’s boyhood home and even met his downstairs’ neighbor! 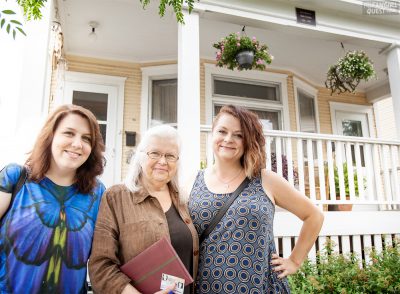 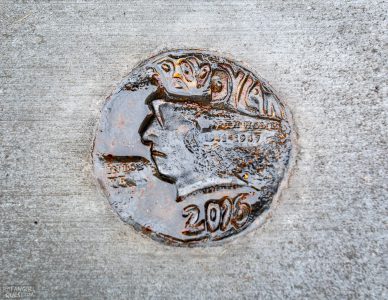 There’s a plaque on the pavement just outside the house.

Our last stop before lunch was the Duluth Depot, a heritage and art center that gave us a great look at the city’s history. There’s an interesting exhibit on the history of immigration to the area as well as historic railroad cars on display. The most touching one was a replica of Abraham Lincoln’s funeral car, where his coffin was transported. I must admit, I may have teared up a bit when seeing it. 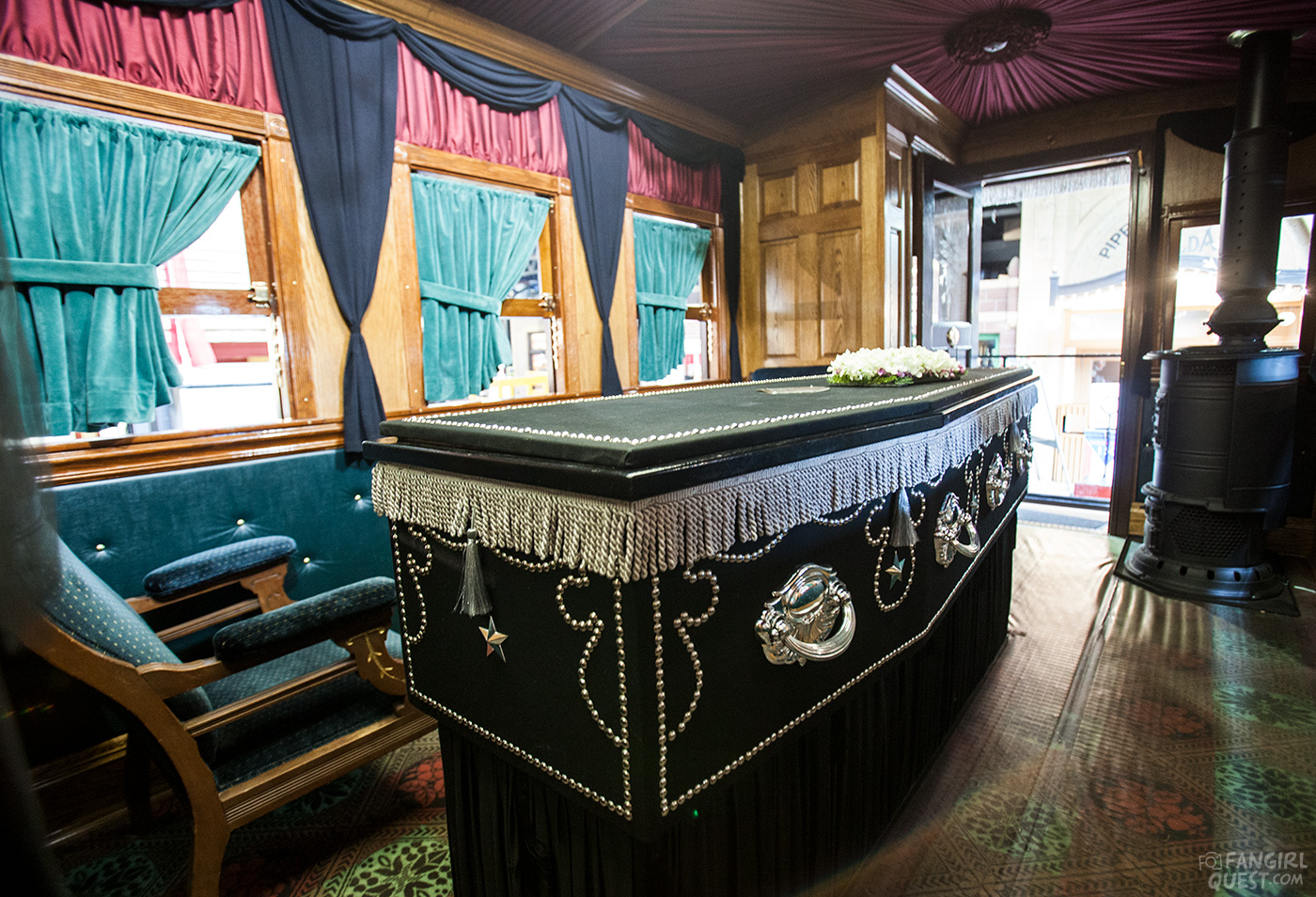 The replica of Abraham Lincoln’s coffin is a somber sight. 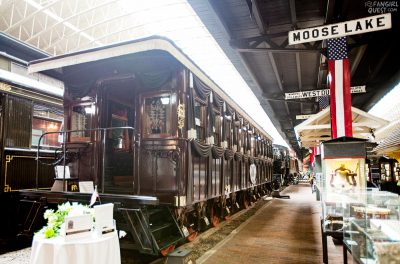 The funeral car is decorated also on the outside. 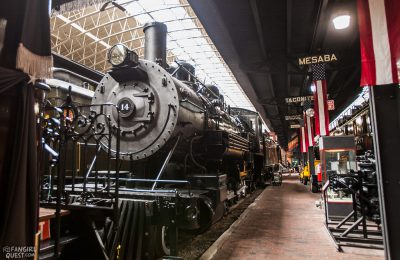 There are several old railroad engines and cars on display at the Duluth Depot. 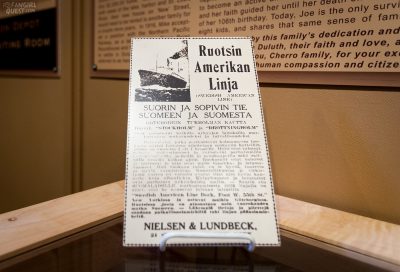 We even spotted a Finnish ad in the exhibit on immigration!

Sceneframing at the Greysolon Plaza

We hadn’t planned on doing any sceneframing in Duluth but then we visited the ballroom at the Greysolon Plaza and found out that it’s a filming location for the movie Iron Will that just happens to star Kevin Spacey, one of Tiia’s favorite actors. Thanks to Google we found a screenshot of the movie and were able to do our thing! 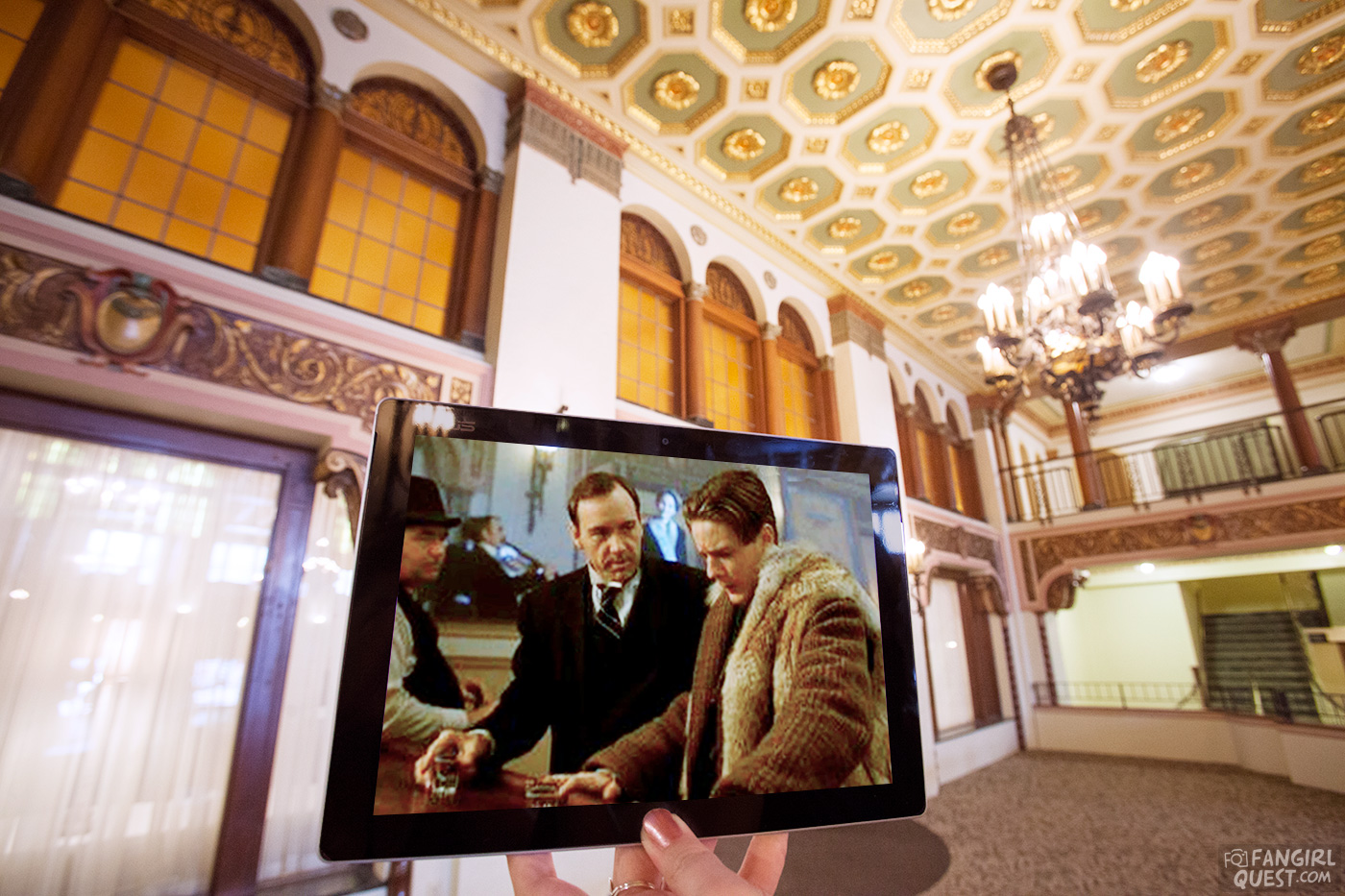 Kevin Spacey in the movie Iron Will at the Greysolon Ballroom

We’ve sceneframed movies and tv shows and planned on doing the same for music videos, but we’ve never done it with historical photos. However, when we discovered that in 1963 John F. Kennedy stayed at the Greysolon we decided to try just that. The result was so good that we might have to do it again! 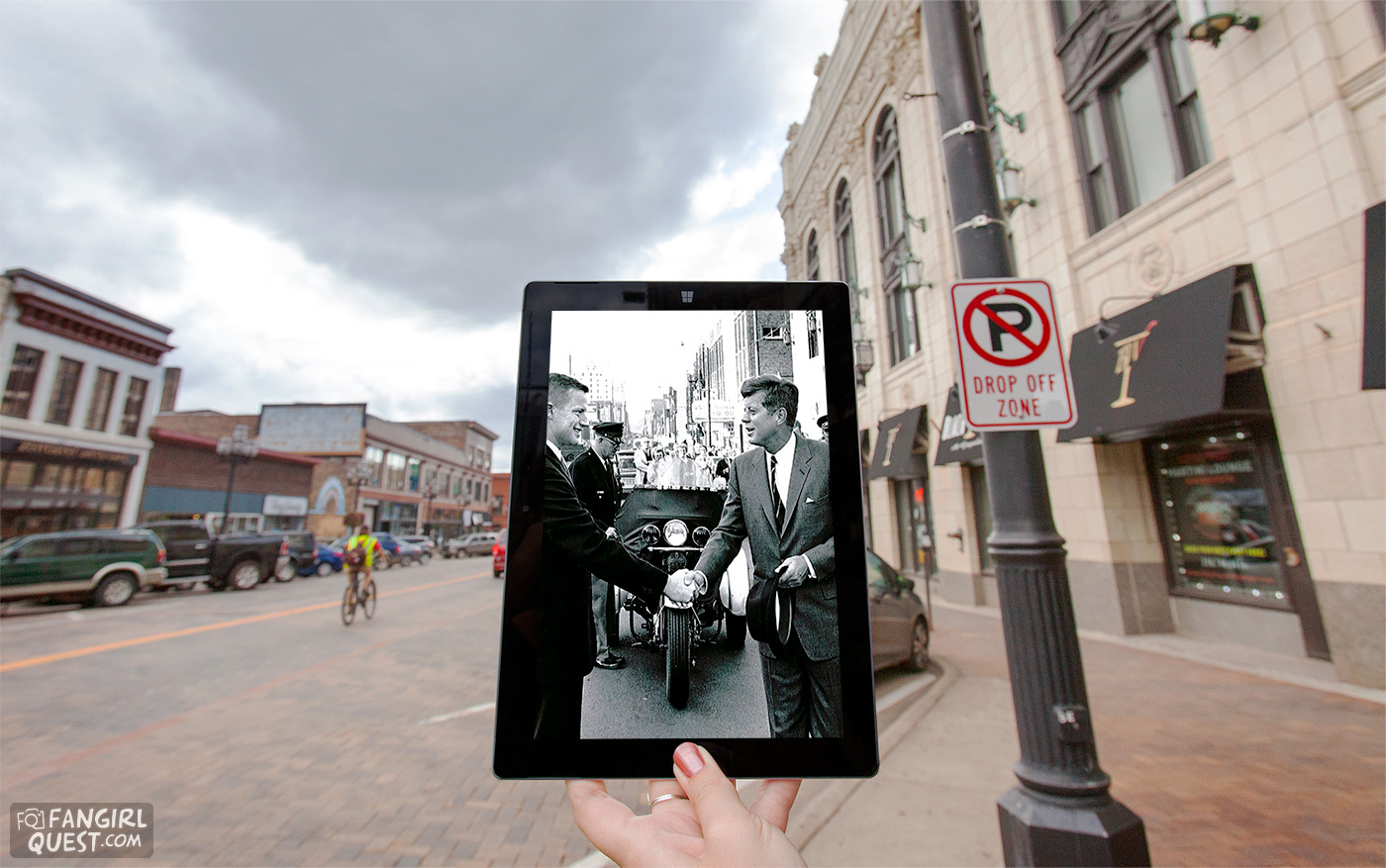 Sadly our time in Duluth was short, but what better way to wrap up the visit than lunch at Grandma’s Saloon & Grill! Grandma Rosa Brochi ran a boarding house for sailors in the 19th century and  soon became legendary for both her humanitarian works and business acumen. Two generations later in 1976 her grandson opened a restaurant at the site of the old boarding house and it quickly became a Duluth staple. The food is tasty and the atmosphere is unbeatable so we can understand why! 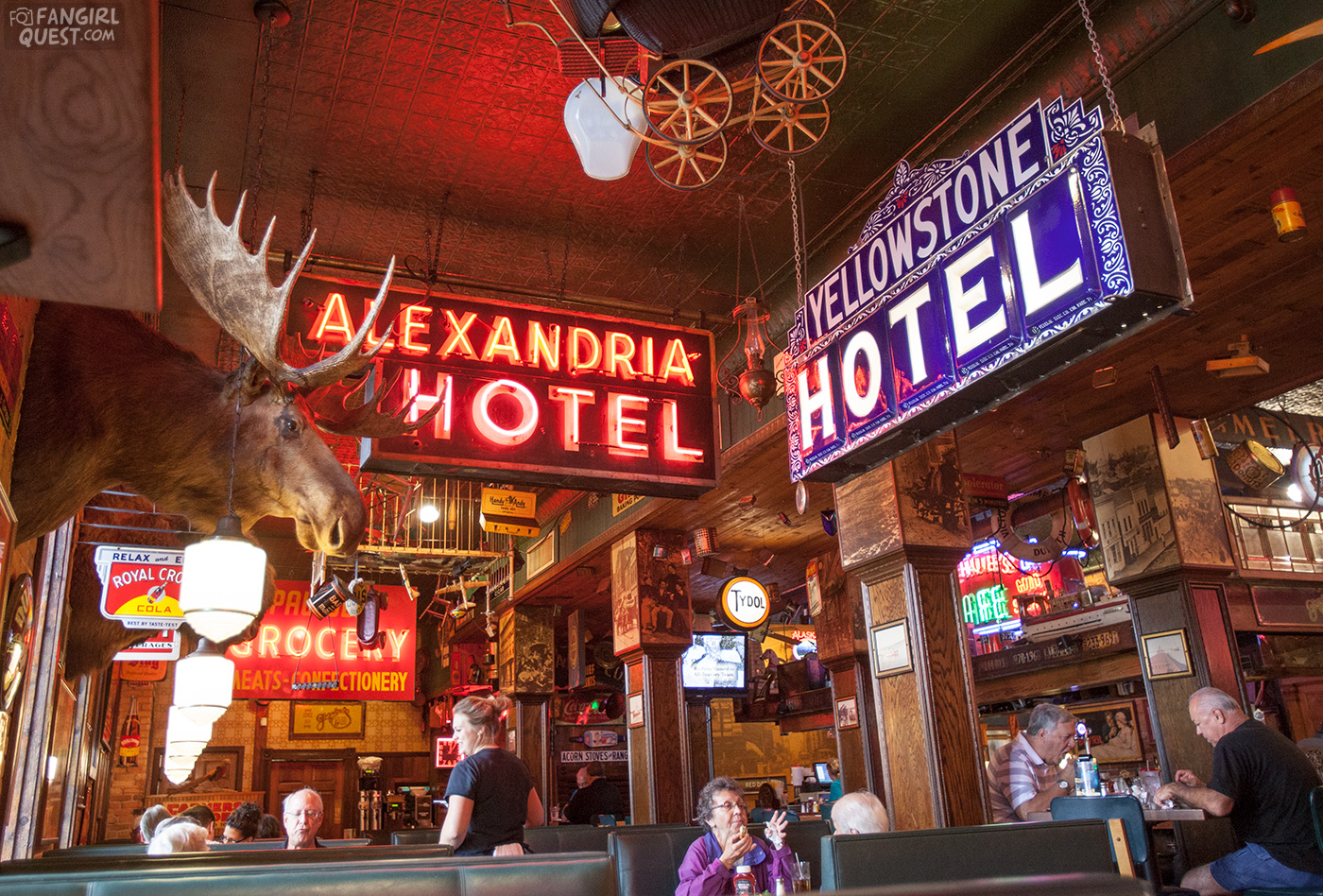 The quirky decor at Grandma’s Saloon & Grill adds its own touch to the atmosphere of the restaurant.

The easiest way to get to Duluth is by flying to Minneapolis and driving from there. Icelandair has daily flights to Minneapolis via Reykjavik from many European cities and you can even add a Stopover in Iceland at no extra cost to your flight!