A Lovely Walking Tour To The Danish Girl Locations In Copenhagen

The lovely row of yellow houses, for perfectly aligned shots.

Oh lovely Copenhagen! We’ve both visited this beautiful city several times before, but never before this as travel bloggers. This time, we only had 24 hours to spend and decided to dedicate the whole day to — you guessed it —  visiting some of The Danish Girl locations. The other film we picked is something a little less known (but well worth the watch and one of Tiia’s favourites) and stars the local superhero Mads Mikkelsen: After the Wedding (Efter brylluppet, 2006).

As usual, we got to see a lot of the city too while looking for these locations.

Our beautiful home for our one night visit, Andersen Boutique Hotel

Our only night in Copenhagen was a very pink and super comfortable one. We stayed just a stone’s throw away from the central train station at a small, but luxurious hotel called Andersen Boutique Hotel. This part of the city is known as Vesterbro and it was a pretty handy spot for little walkabouts around town.

Upon our arrival and check-in we got to chatting with the lovely lady at the reception. She asked for our reason to be in Copenhagen and of course, I jokingly answered with “Mads Mikkelsen“. She got super excited about it and we ended up talking about the Mikkelsen actor brothers for a good while. She also shared some tips on some neighbourhoods and cafes they used to hang out at back in the day! 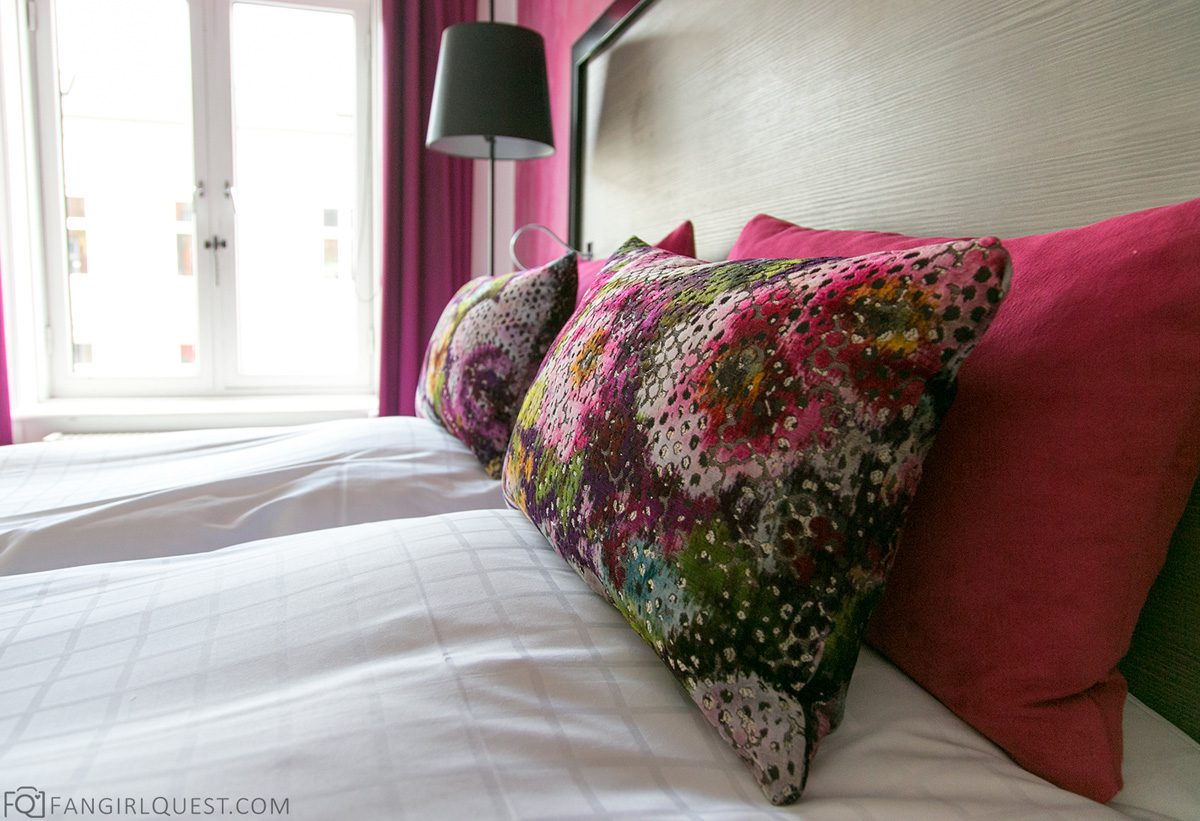 Everything’s so pretty and pink! 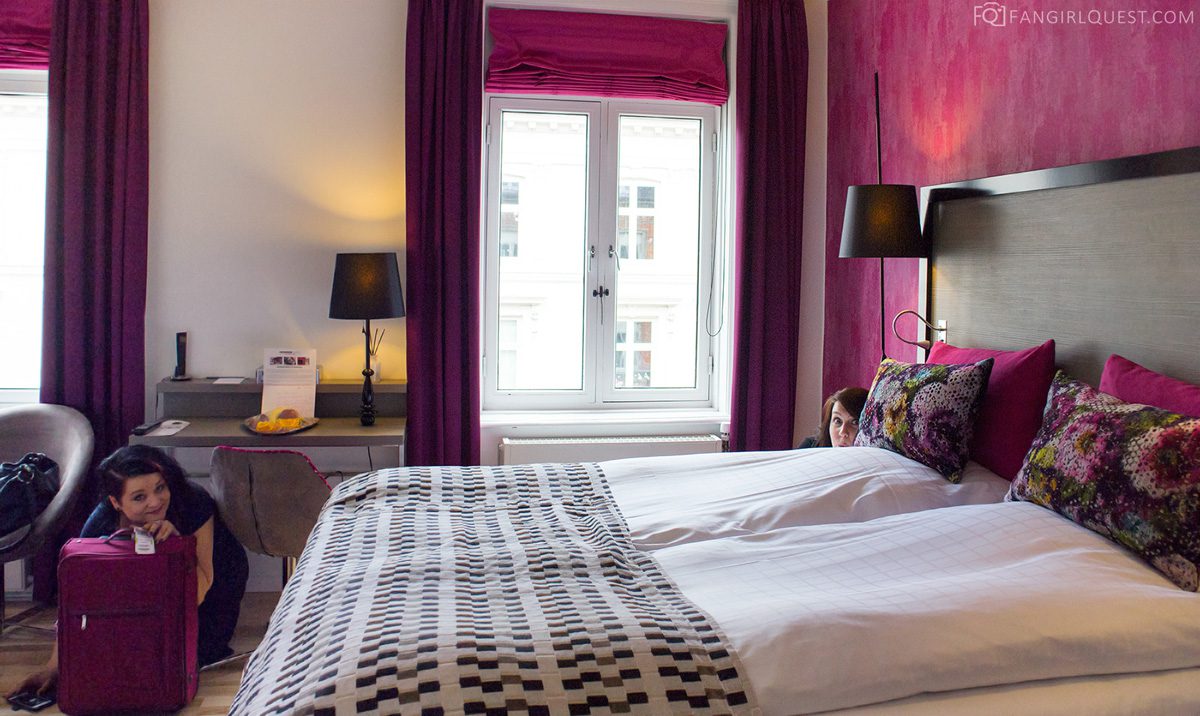 Fangirl Quest hiding in their fittingly pink room. This photo ended up being featured on Andersen Boutique Hotel’s Instagram, of course. 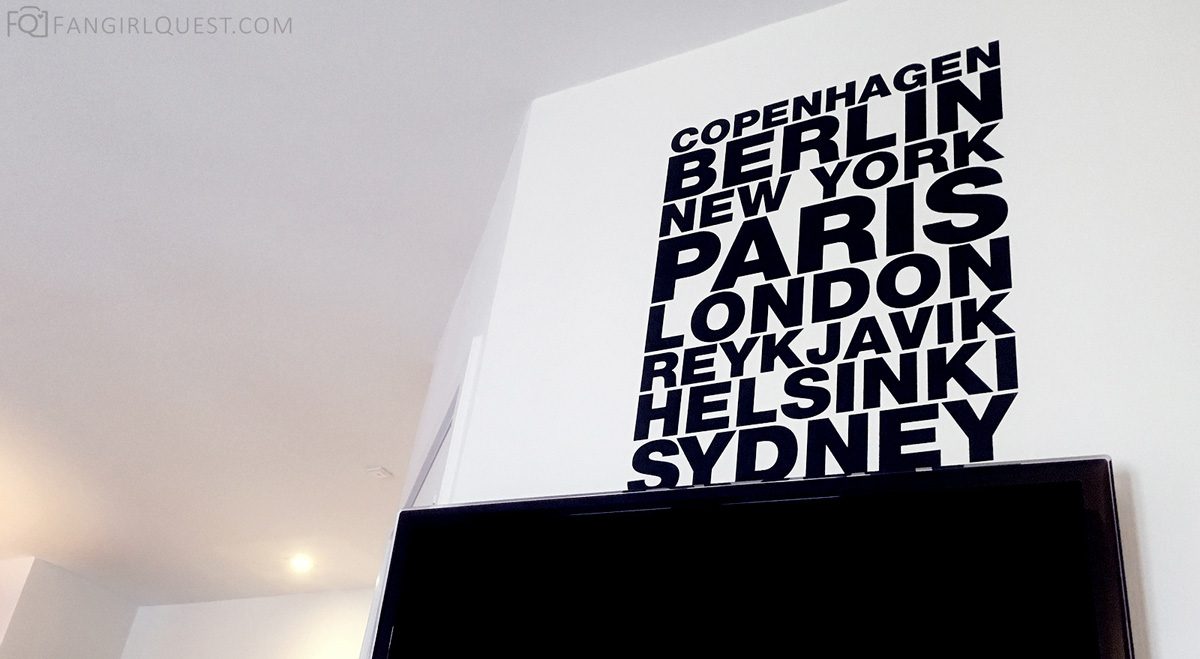 Inspiring wall decorations for travelers. We’ll only need to visit two cities on the list and then we can say: been there, done that!

(Just in case you aren’t well educated in the Mikkelsen brothers’ work: Mads Mikkelsen is known from Hannibal, the new Star Wars Rogue One and Marvel’s Doctor Strange, while his brother Lars Mikkelsen has made appearances in both Sherlock and House of Cards. That makes them pretty cool pair of brothers, doesn’t it?!)

Out of all the uniquely decorated rooms we happened to get the one that fit the Fangirl Quest colours perfectly! Coincidence? We’re not actually sure, but we sure took a lot of photos and wanted to steal like at least half the stuff. 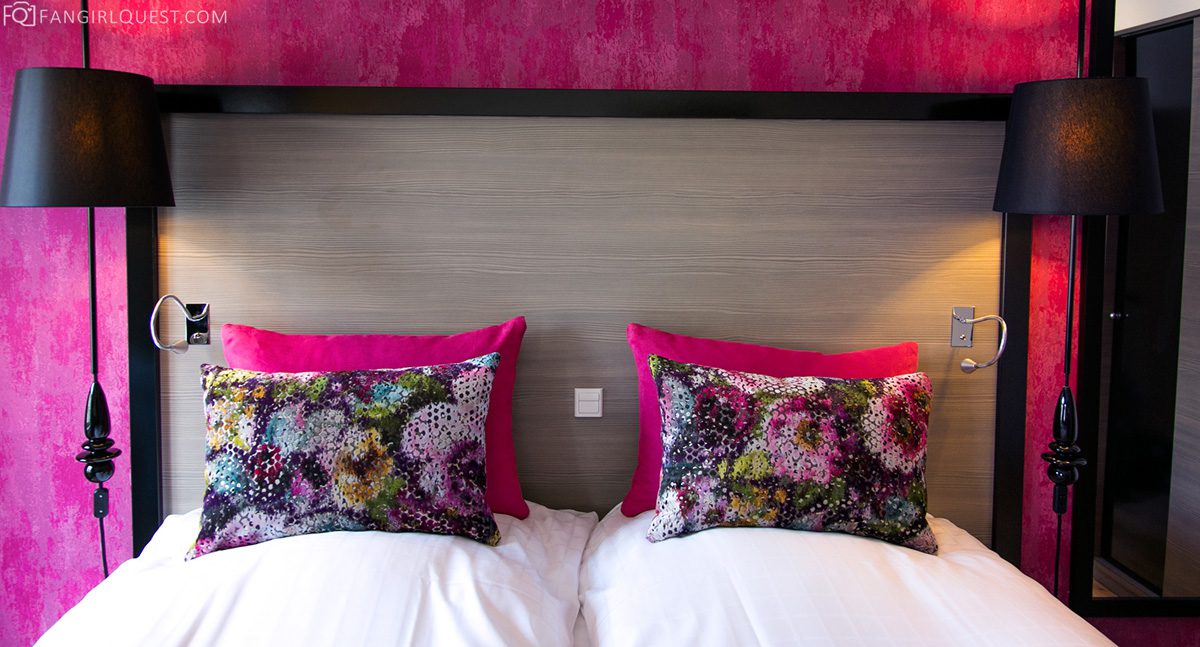 There’s one really cool detail about Andersen Boutique Hotel that you won’t see every day: they swear in the name of something called Concept 24, which means you’ll get the room for yourself for the full circle of 24 hours, no matter what time you check in. So, if you happen to check in at 5pm, you’ll get to keep the room until 5pm the next day! AMAZING.

Time for a stroll in Copenhagen!

We took the whole day to just walk from one filming location to another as we knew we’d see a lot of the city while at it, too. One of the great things about Copenhagen is, of course, the lack of steep hills and bumps. It’s all just very smooth and flat.

From a photographer’s point of view the weather wasn’t the best (dull grey is the worst!), but the city still managed to look quite lovely even in the photos. 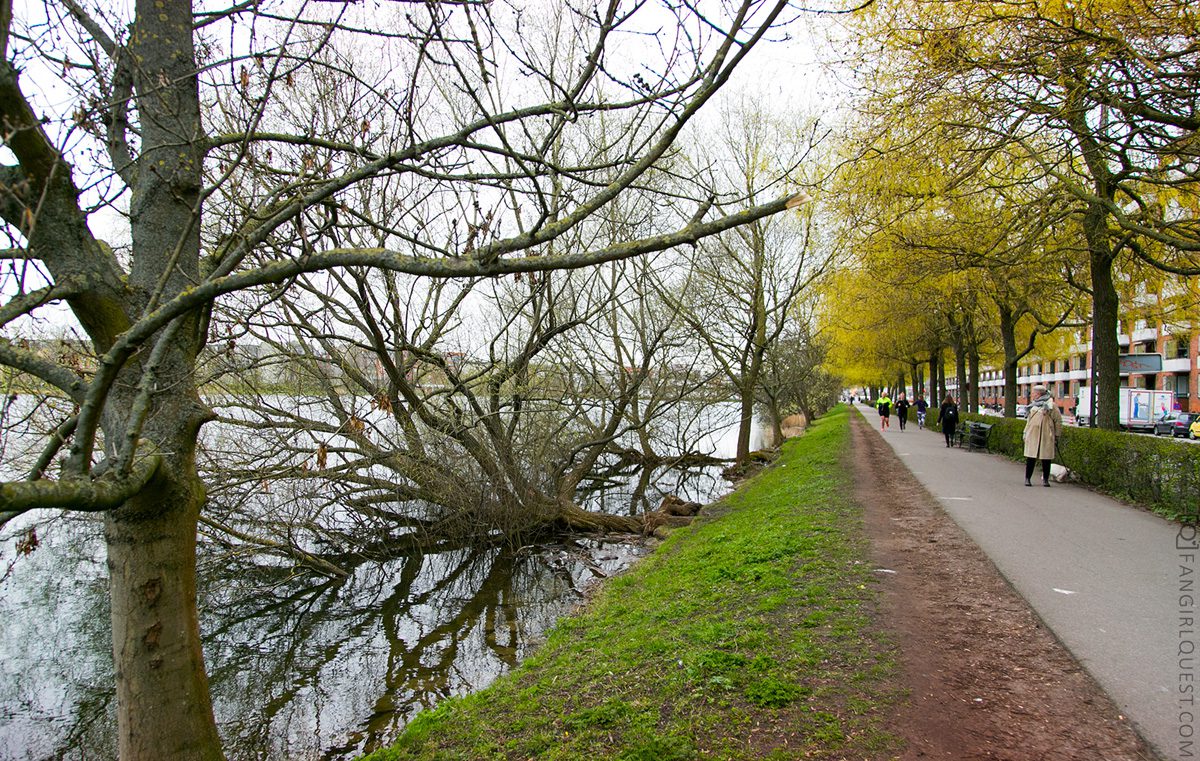 The Lakes (Danish: Søerne) in Copenhagen, Denmark are a row of three rectangular lakes curving around the western margin of the City Centre, forming one of the oldest and most distinctive features of the city’s topography. The paths around them are popular with strollers, bikers and runners. Lähde: Wikipedia

We approached the first one of our dozen Danish Girl locations (and the Mads Mikkelsen ones!) on foot, along the lovely ponds known as The Lakes, snapping photos of the numerous swans and ducks and loving the view that opened beyond the water. 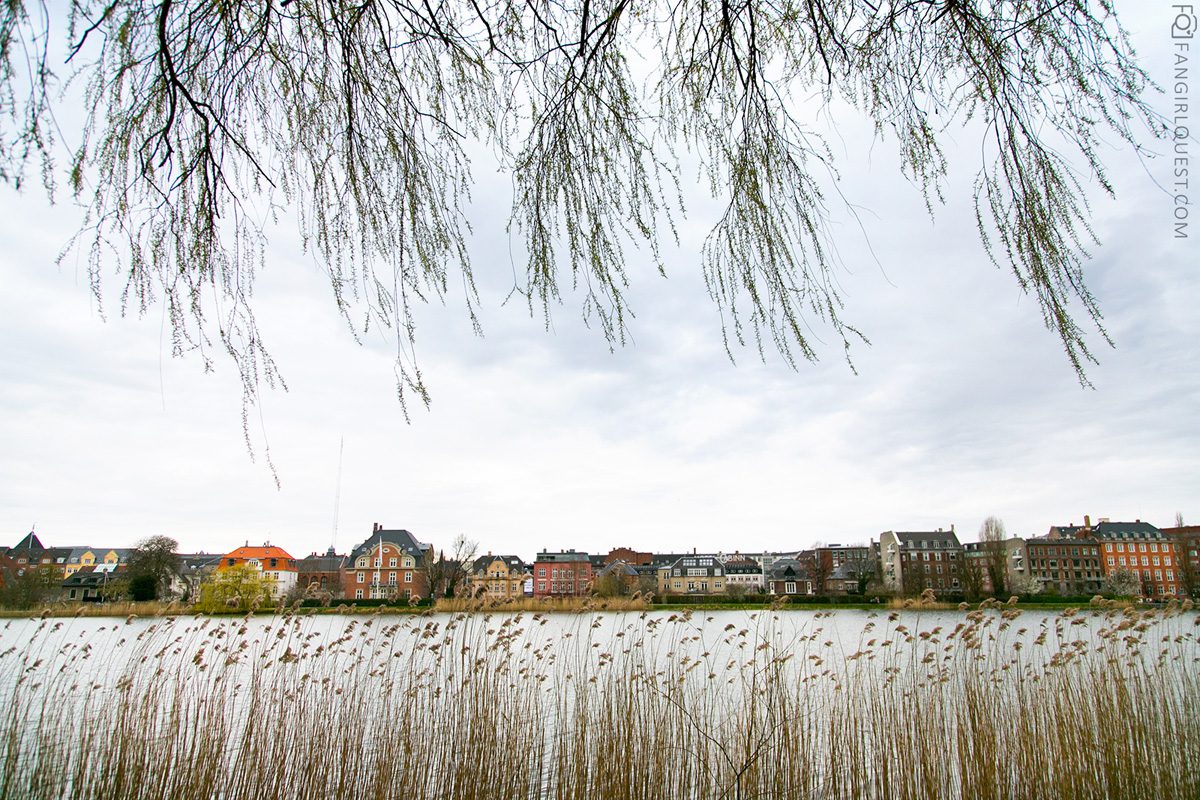 Another one of those ‘Ooooo I wish I lived here’ moments

We were also keeping our eyes peeled for possible Mikkelsen sightings, because let’s face it… we wouldn’t be the Fangirls that we are if we didn’t always stay hopeful of the chance encounters with our idols.

Alas, no luck with the brødre. 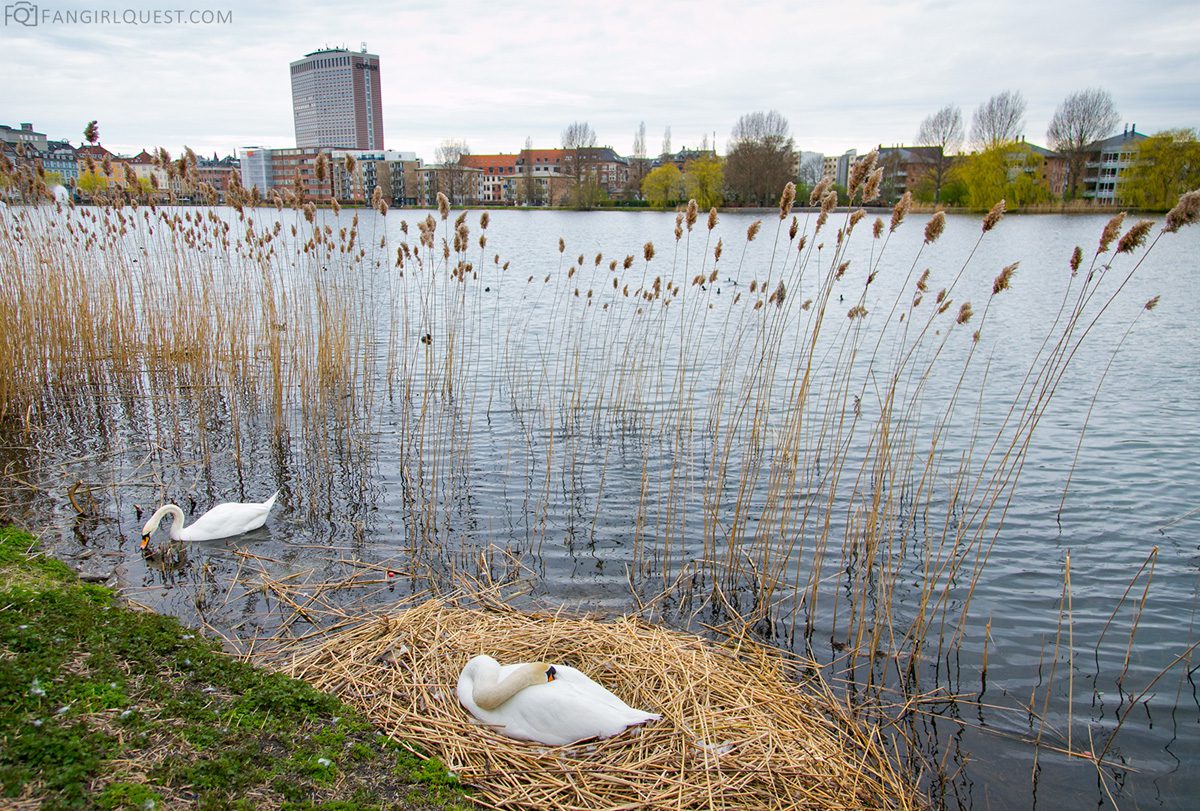 A beautiful spot for swan families, as well

My favorite bird photo must be the one below, though. Doesn’t it look like this swan took this herself?

“Moooom look here’s a selfie of me in Copenhagen!” 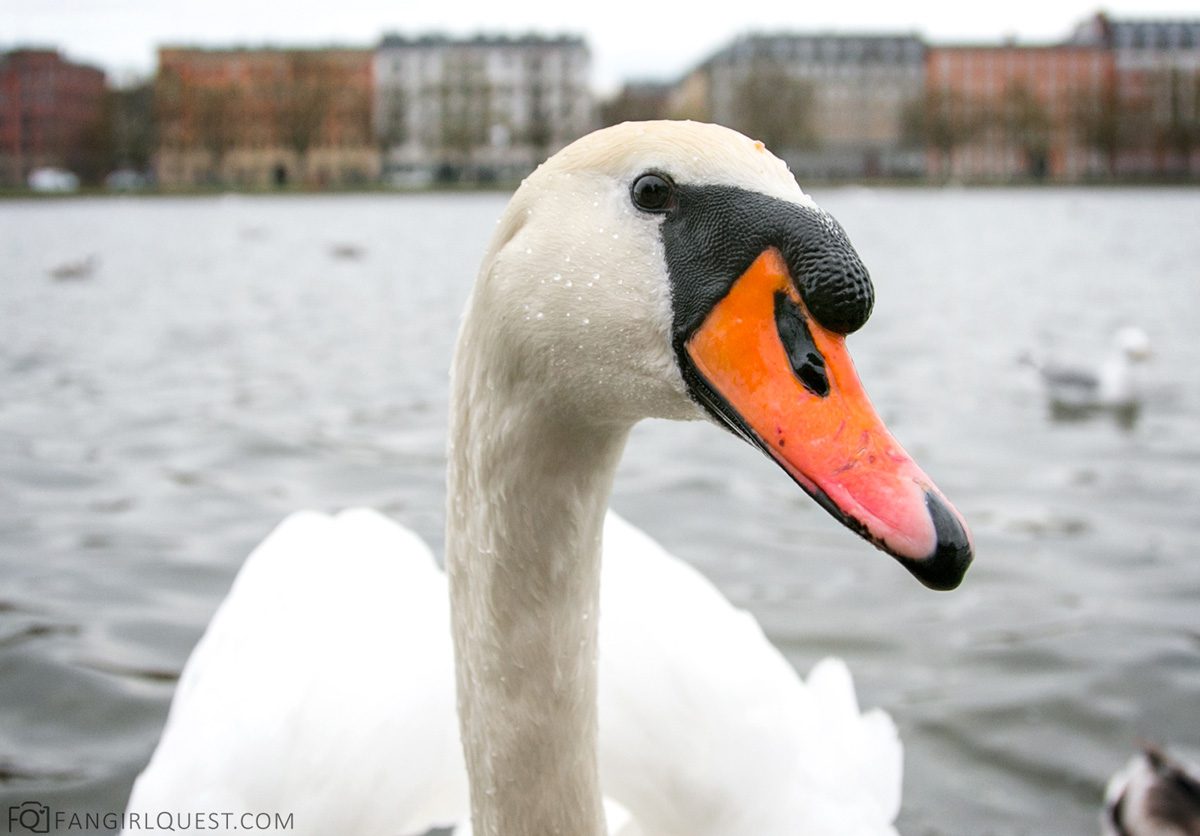 A curious swan takes a closer look at the camera

We stopped for quick photos at the Copenhagen National Gallery (Statens Museum for Kunst) even though we didn’t have time to go in to explore at this time. The building holds in it a vast collection of art from both Denmark and other parts of the world, and many of the names on their websites certainly piqued my interest.

But it’s not like we aren’t ever going back to Denmark, so maybe it’s not a forever lost opportunity. 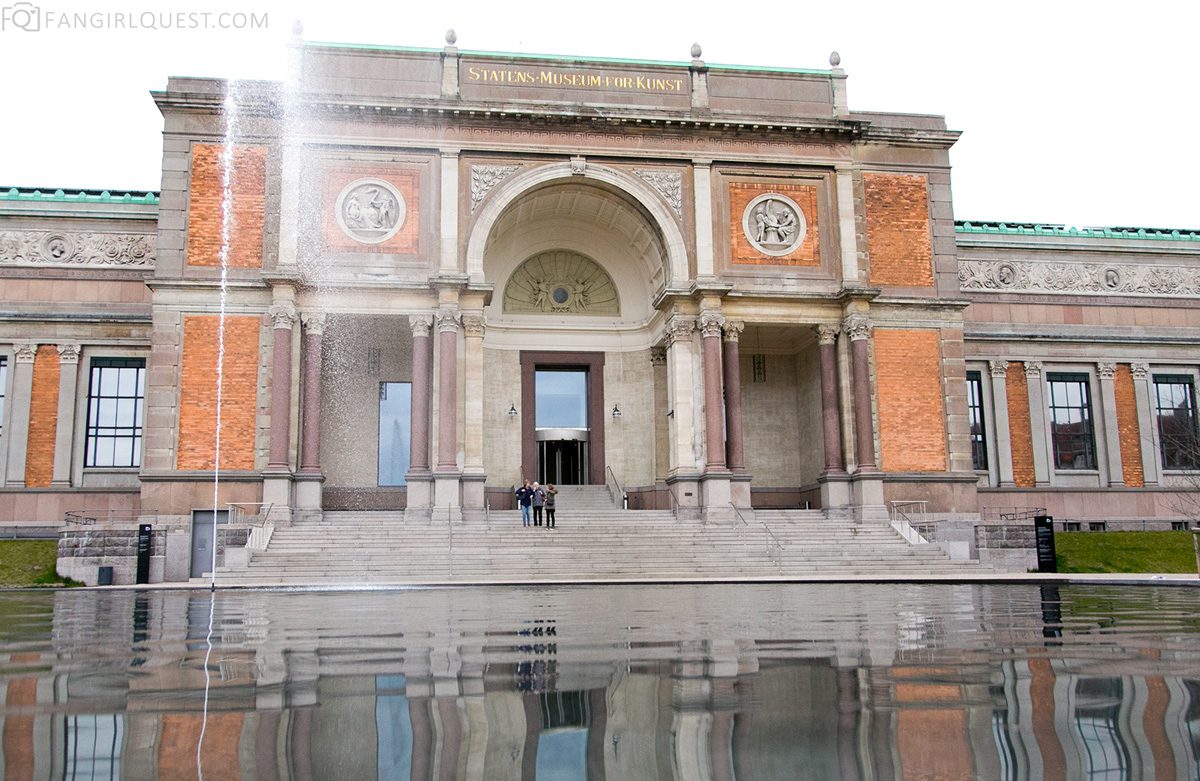 (Yeah. Fountain reflections are pretty cool. I’m always crawling around looking for water, puddles, anything to get some reflections, but fountains make it way easier to catch some!)

The Danish Girl Hospital at the Copenhagen City Hall

The beautiful light in Copenhagen City Hall as known as the hospital from the Danish Girl.

One of the most iconic locations seen on The Danish Girl is the Copenhagen City Hall. This building acts as the hospital where Eddie Redmayne‘s character Lili Elbe finally checks into to get the operation done. The building is open for visits and features a series of stunning stairways, hallways and other beautiful details.

Even if you’re not a film tourist, you might enjoy the architecture and the lovely Instagram ops this place offers.

Beautiful colors, shapes and design at the Copenhagen City Hall.

We spent a good while at the City Hall looking for the right spots for our sceneframes and even ended up getting a little lost. All of a sudden we just found ourselves in the basement floor, somewhere near some kitchens and cellars and worried that we’d crossed some invisible line and were going to get arrested. Oops!

Possibly the most famous one of the Danish Girl locations: Nyboder

One of the most striking filming locations the Danish Girl crew ended up using are definitely the yellow barracks where Ben Whishaw‘s Henrik lives in the movie. Today, they’re actually people’s homes, so if you’re planning a visit, please be mindful of the residents! 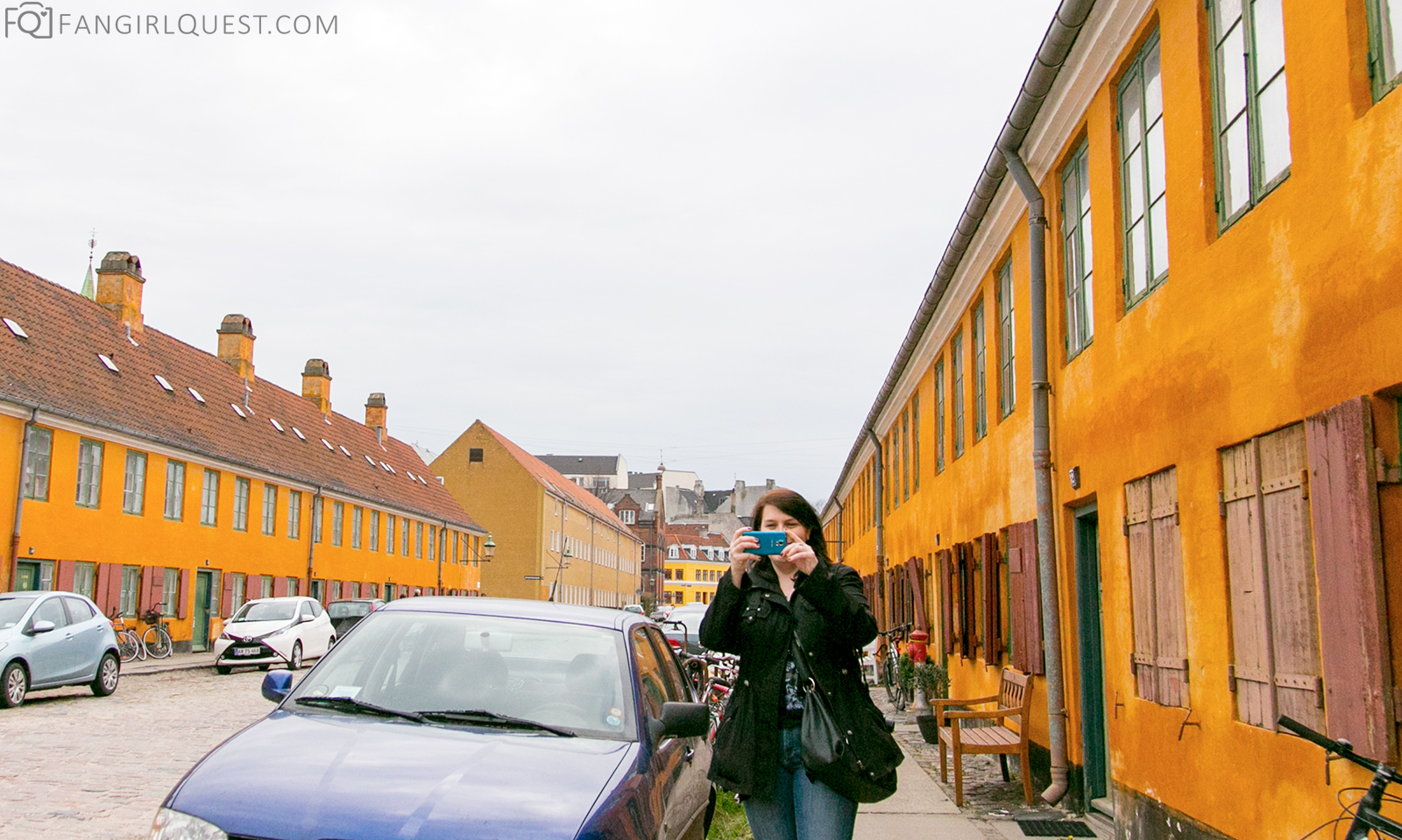 A blogger photo moment at the yellow barracks of Nyboder.

You’ll find your way to the houses easily by looking for “Nyboder” on the map. The colour of the houses is really amazing. It was actually so deep that it confused the heck out of our automatic white balance settings on our cameras!

Nyboder is today very much associated with their yellow colour and “Nyboder yellow” is in Danish often used as a generic term to refer to their exact hue of yellow. However, the original colour of the development was red and white.

Here’s a quick greeting from the Nyboder. Can you imagine people actually living here?

Below you’ll see one of the sceneframes we took in Copenhagen. This one’s from Nyboder, on location in front of Henrik’s apartment.

However… today, as I’m finishing up this story, I have some sad news: I haven’t been able to locate the rest of the files! I’ve spent hours looking for them but they’ve just simply vanished. I can not understand how it’s possible: even the Mads frames are gone. It doesn’t make any sense, since all the regular photos are still here, safe and sound.

(I will keep looking. Or then we’ll just have to go back and do it all over again!) 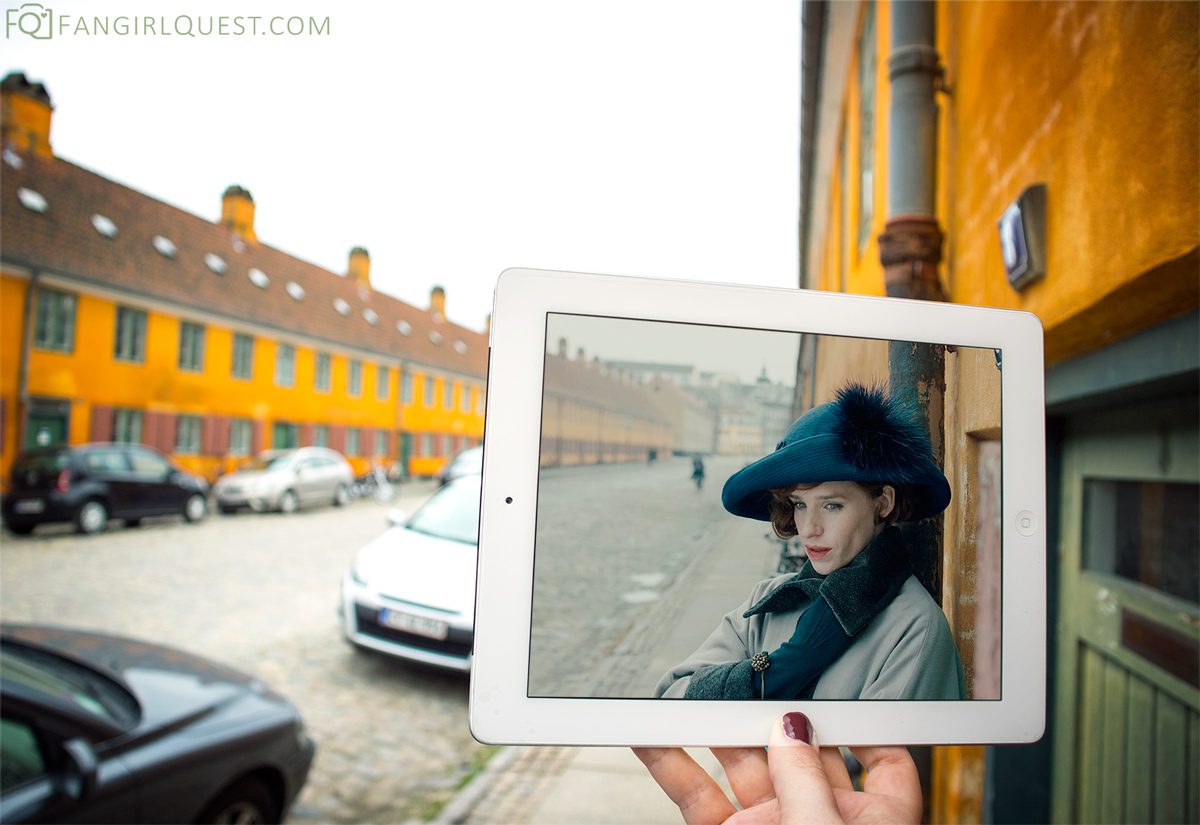 The yellow is just stunning. I want a house this yellow now. It’s warm, it’s inviting, it cheers up the whole neighbourhood. This yellow would probably cheer up the whole Finnish winter as well! 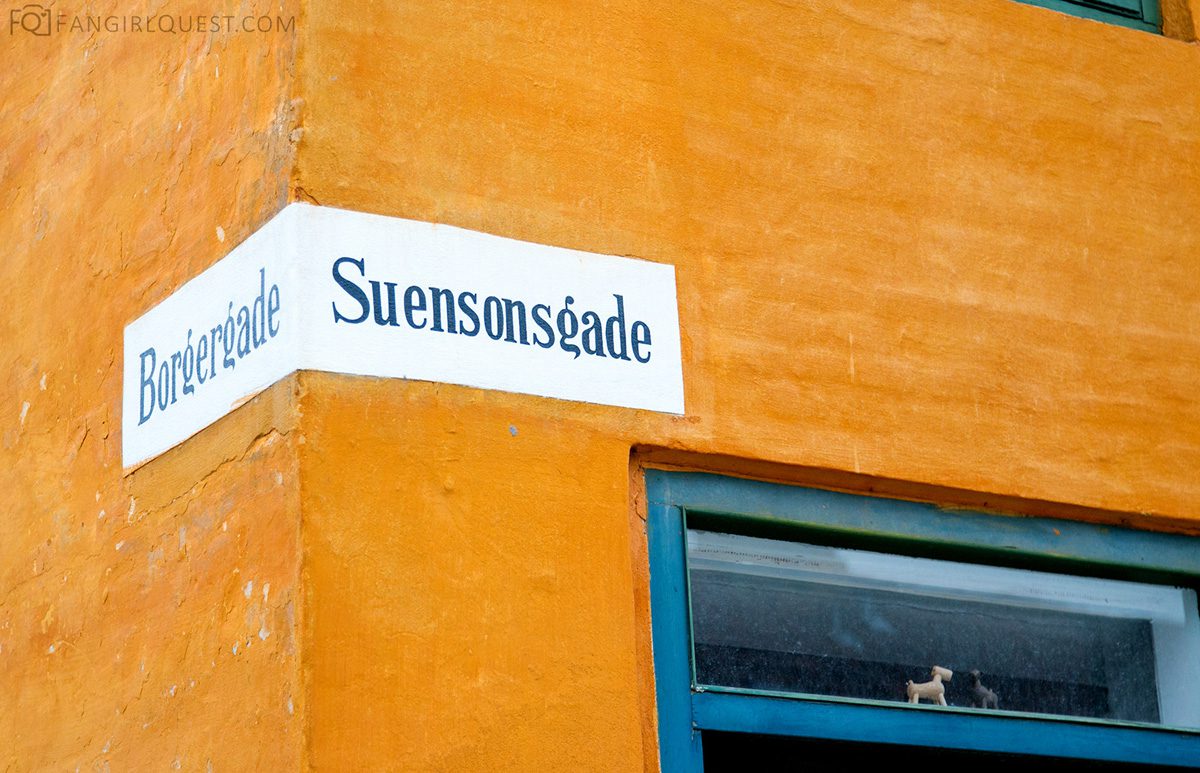 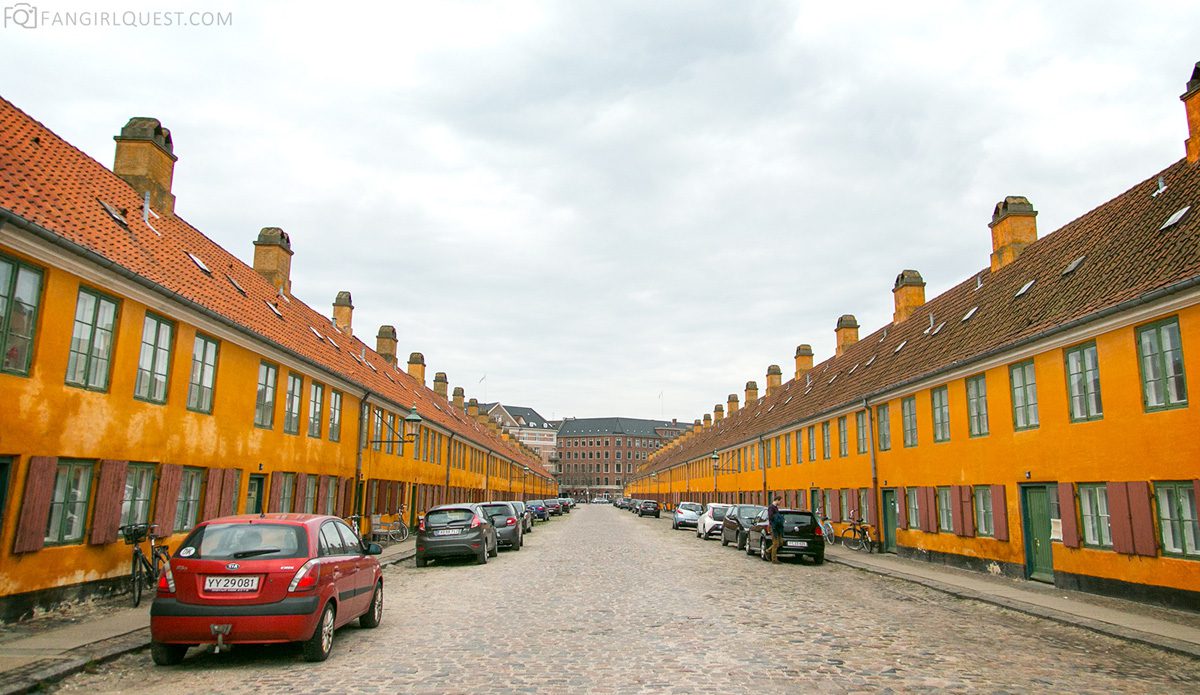 The lovely row of yellow houses, for perfectly aligned shots.

The Danish Girl was also filmed in one of the most photographed spots in Copenhagen: Nyhavn. So that makes Nyhavn another perfect place where to combine regular touristing with the film tourism thing! 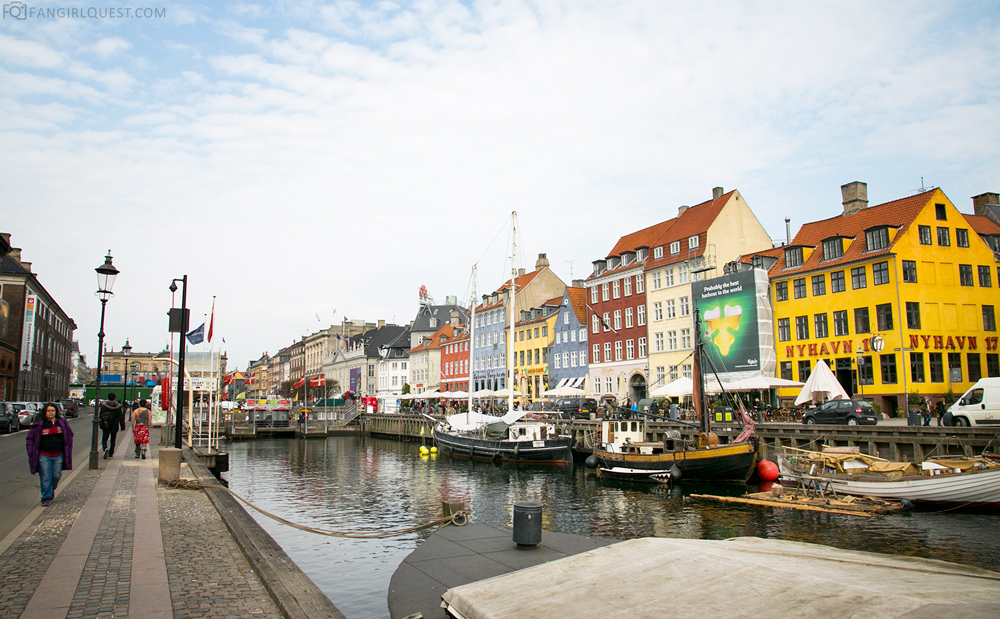 We even found the little alleyway where Lili (Einar) and Alicia Vikander’s Gerda practice the graceful walk. And of course… we had to give it a go. Now, we didn’t have anyone there to take the photo, so you can imagine all the clumsy fun we had with the camera’s timer. 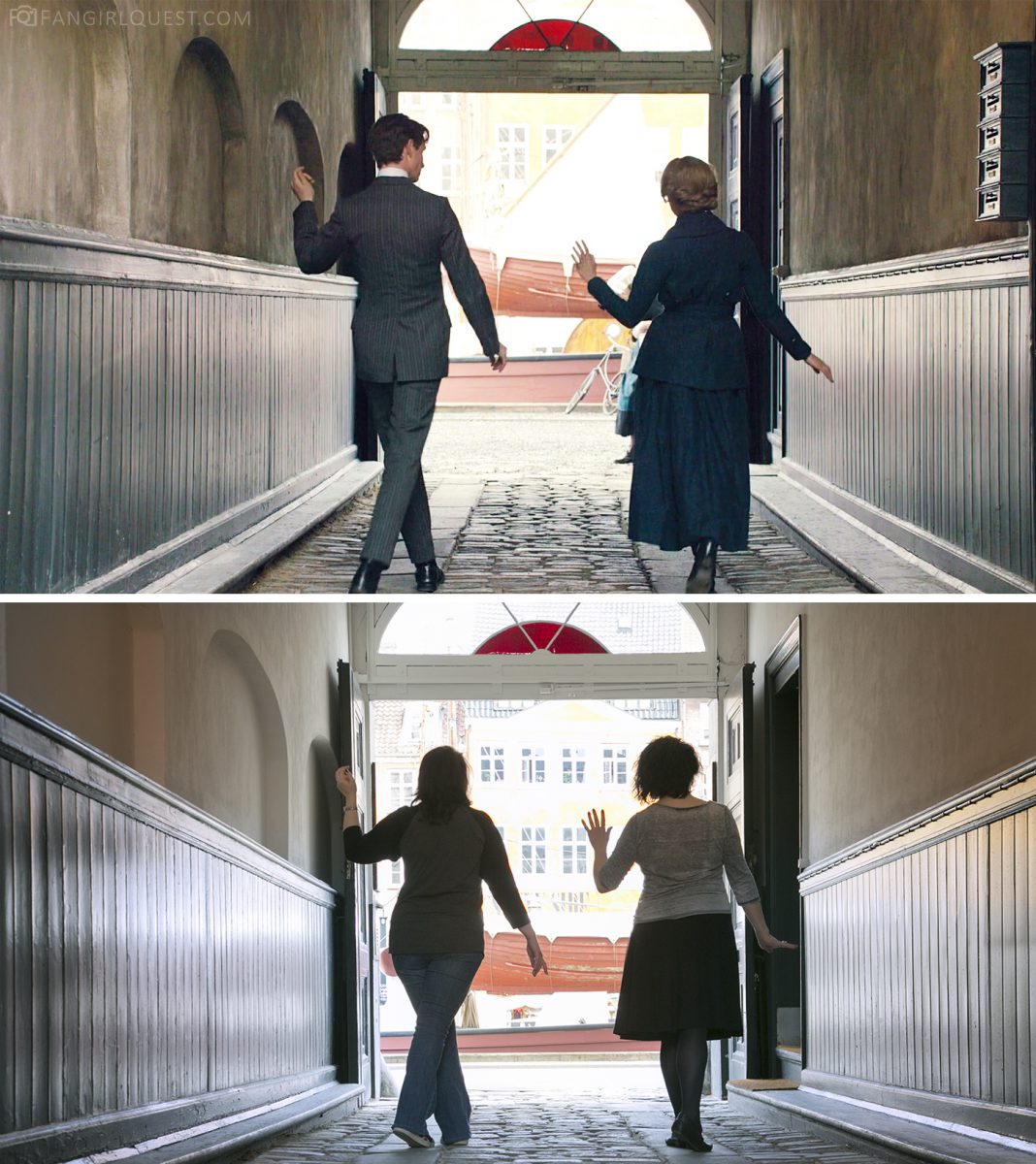 The search for the lost sceneframes…

Ok, so we’ll have to keep looking for the lost sceneframes. We’ve got a few more lovely Danish Girl locations to share with you guys, so we’ll have to come back to this story once the photos have been discovered. But for now… hope you enjoyed it!

Let us know in the comments below if you’d like to visit any of these locations or if you’ve been there or to Copenhagen already! To be continued…

(Oh and hey! There’s actually a really cool location guide on Visit Denmark’s website too. Do check it out if you need more information and tips for visiting!)