Asylum 14 AKA A Weekend With The Cast of Supernatural 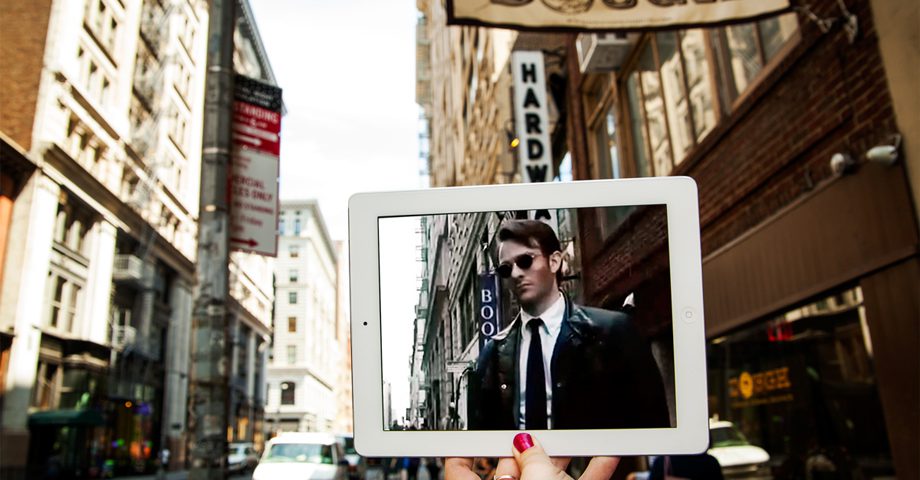 Finding filming locations in a big city is fairly easy, as there are plenty of landmarks and buildings people recognize and then helpfully list online. Some of them are easily accessible, some of them are closed from the public. We did a trip to New York with Netflix and spent a few days hunting down the best Daredevil filming locations.

See our detailed location map at the end of this post! 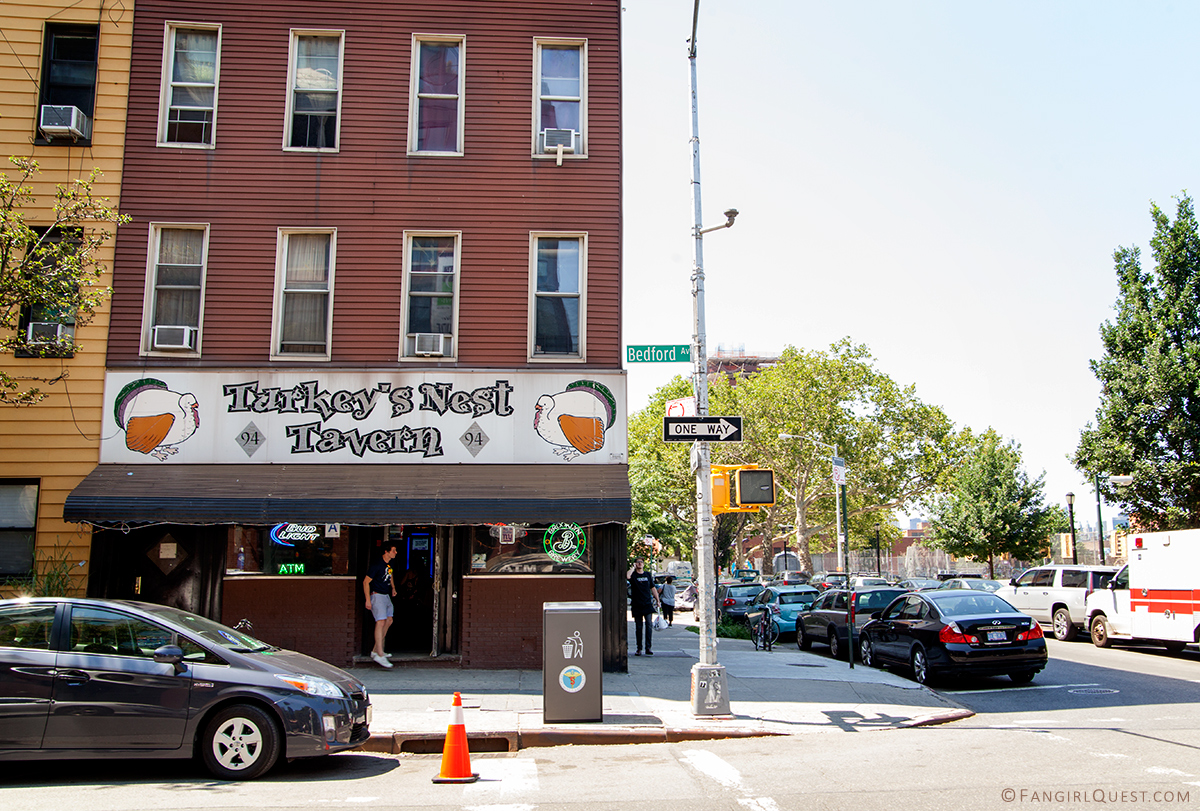 The Turkey’s Nest is not much to look at from the outside, but it’s an important one for the Daredevil fans!

Turkey’s Nest Tavern is a proper, good ol’ fashioned dive bar in Brooklyn that was transferred into Josie’s Bar, a regular hangout spot for Matt Murdock and pals. We went in, greeted the bartender and very politely explained what it is we’re doing, hoping we’d get a permission to snap a few sceneframes. We’ve had a couple of strict no’s from clubs and bars in the past, so we’re always a bit nervous about photographing in such places. But our worries were unnecessary. 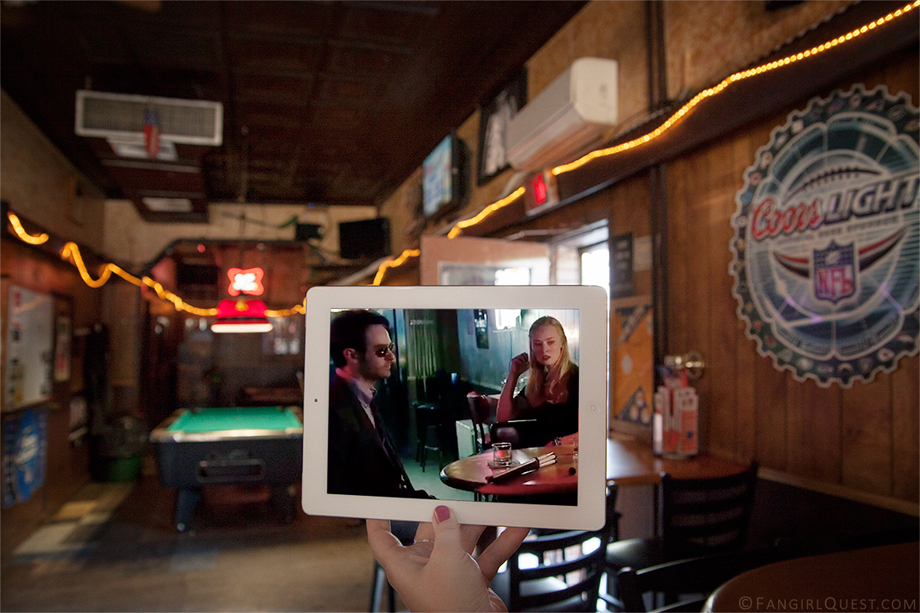 Matt and Karen sit in a pub in Brooklyn, NYC.

The friendly, relaxed bartender seemed happy to receive Daredevil fans. He bragged about the crew coming back for filming just a few weeks prior to our arrival, then told us to “enjoy ourselves” and take as many photos as we wanted.

We spent a good while looking for the right angles, trying to work in the harsh pub lighting, and noticed all the changes they’d made when filming, like a neon sign on the wall and other small stuff here and there. But the basics were still the same – the bar, the pool table and most of the chairs and tables. Which was good enough for our sceneframing purposes.

We had a short chat with a couple of regulars too (or possibly other staff members) and they were quite impressed with our project. Sceneframing is always a good discussion opener!

Unfortunately, it was the first location we visited that day, so we couldn’t stay for those massive margaritas that our Brooklyn based friends recommended. Definitely going back for those some day! Might have to wear a pair of red sunglasses for the occasion, too.

Turkey’s Nest doesn’t seem to have a website, but here’s a fun little review from nymag.com.

“And you’ve got to love a place where the bartender actually laughs at you for asking—at a very non-happy hour—if the twenty you gave him for four beers is enough.” 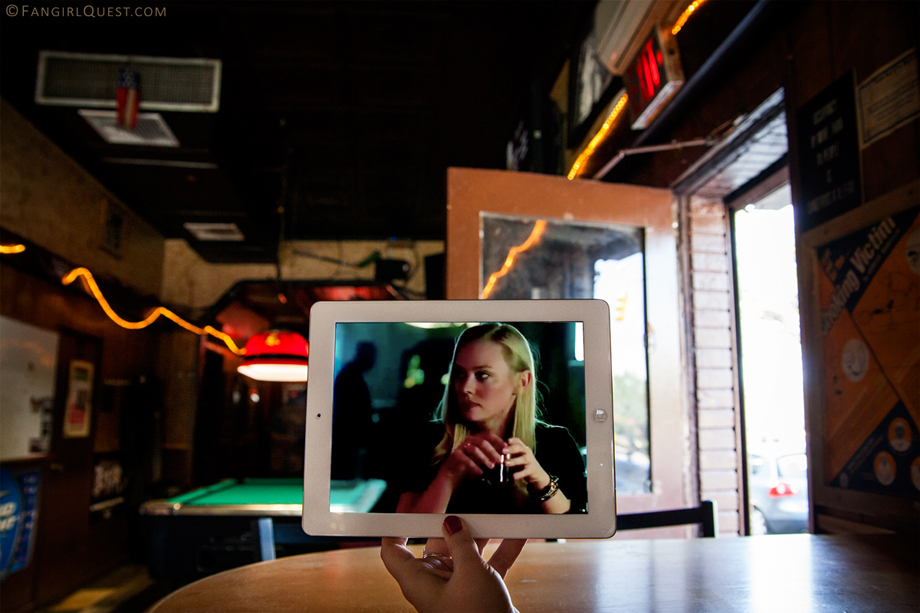 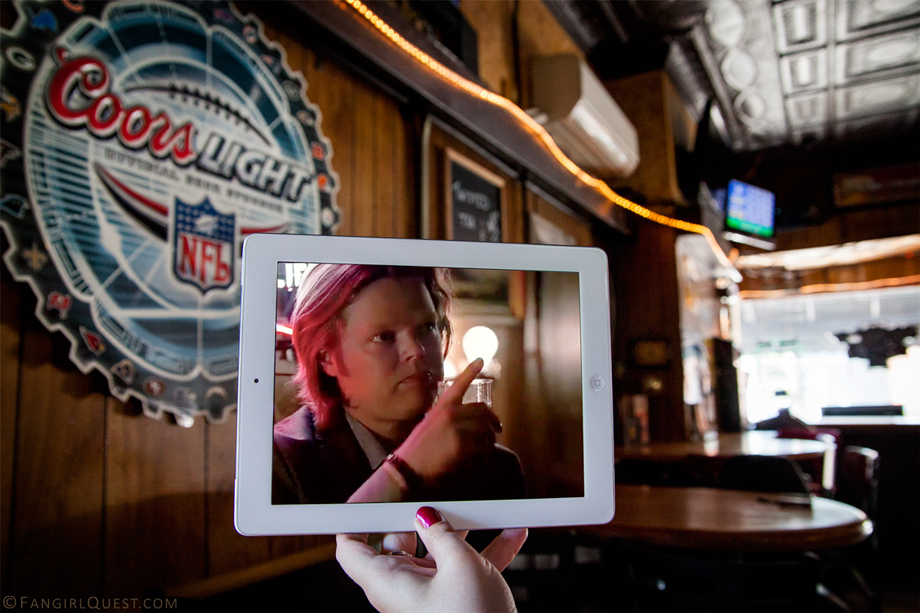 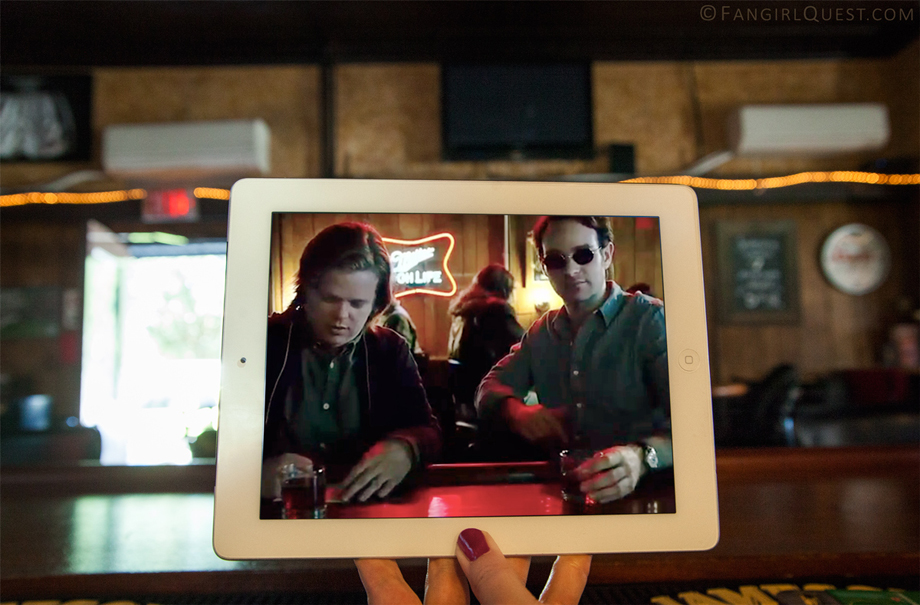 Josie’s is an actual dive bar in Brooklyn, called the Turkey’s Nest Tavern 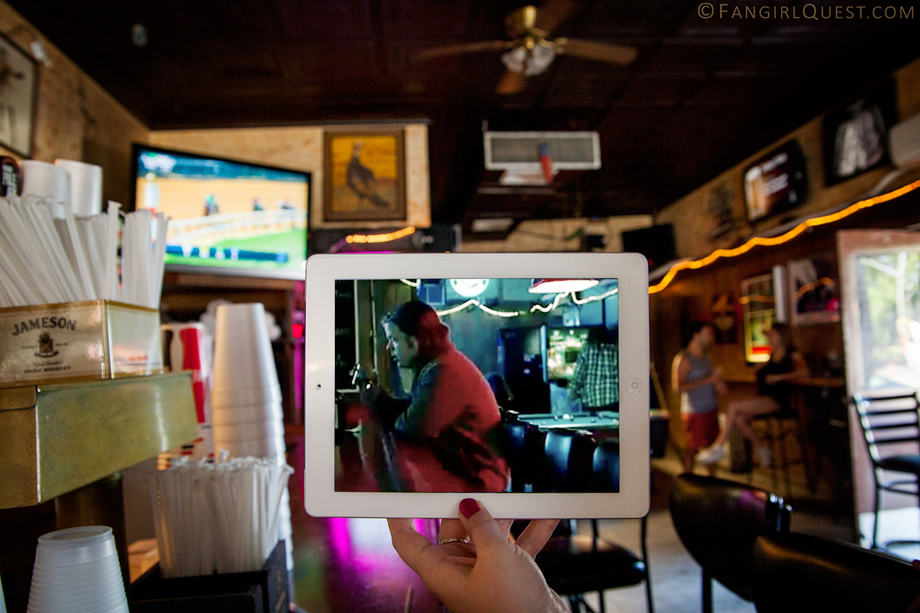 Foggy sits and drinks at the bar.

This is where we meet Wilson Fisk‘s right-hand man James Wesley (portrayed brilliantly by Toby Leonard Moore) for the first time. We were expecting an actual park and were surprised to find it was a triangle shaped little plaza in the bustling East Village. Very pretty, though! We spotted the statue that can be seen in the background of the two men right away, snapped our photos and went to a nearby K-Mart for some cheap shopping.

The story behind the park’s name is a very sweet one. Abe Lebewohl was a Holocaust survivor and the owner of a deli on 2nd Avenue.

“Over a period of forty years, Abe Lebewohl (1931-1996) transformed his Second Avenue Deli into a New York institution, drawing loyal customers from celebrities, tourists and locals alike with his Jewish culinary delicacies and generous and magnetic spirit.” (Wikipedia)

Lebewohl was also a great humanitarian, feeding the homeless and supporting many causes, and his tragic death in 1996 touched thousands of people and made the nationwide news. Here’s New York Times’ story on his death. 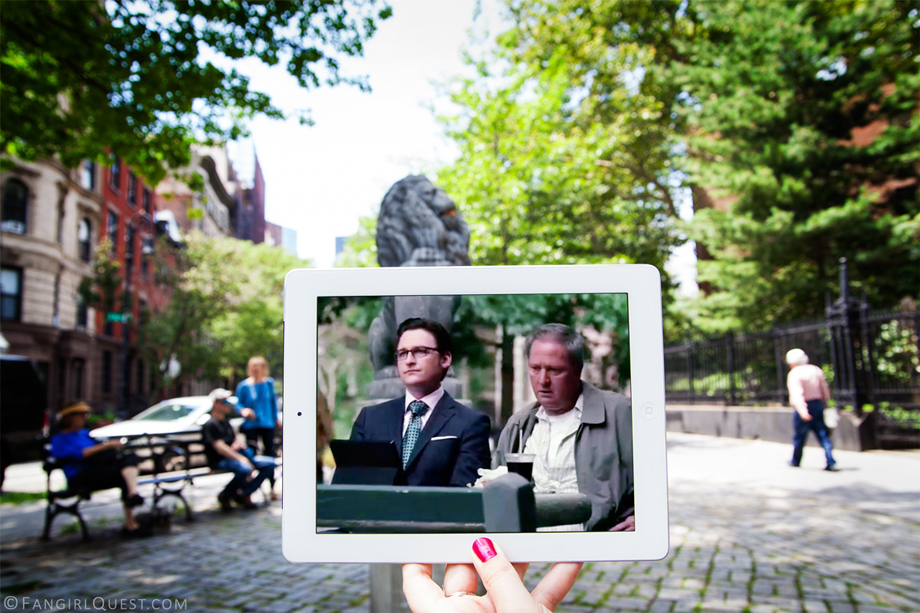 The 2nd Ave Deli’s website has a lovely page dedicated to Lebewohl. It’s pretty amazing that a modern tv show about a blind superhero can lead us to amazing real life stories like Abe’s. I mean, this guy should probably have his own movie. (With Tom Hanks in the lead. Because obviously.)

One of the easiest to visit out of all the Daredevil filming locations! This is the spot where they filmed Matt Murdock following one of Madame Gao’s (Wai Ching Ho) workers to her hidden factory. It’s just your regular New York street around the corner from Union Square, so not one of the most exciting filming locations. But hey, there’s a fantastic donut shop right on the spot and an utterly amazing diner just a couple of blocks away. Scroll down for photos and details… 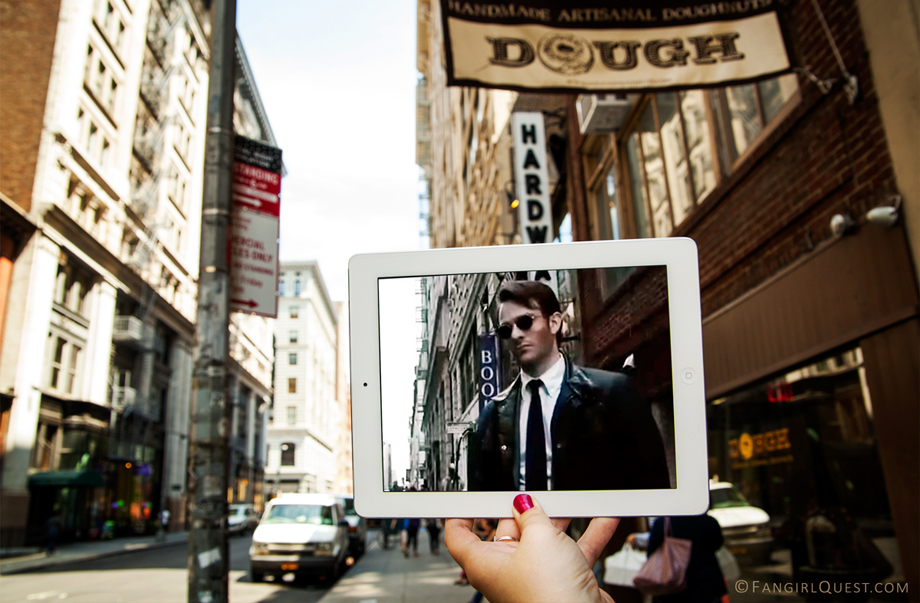 Plus, if you’re into books (like we are!) you can visit the lovely independent book store called Idlewild Books right on the spot, or for more commercial tastes, pop down to the massive Barnes & Noble in Union Square. We went there too on our last day to check out their massive Funko Pop Vinyl shelves. Good times!

Sceneframing usually takes us to remote and strange places like empty beaches, dark forests and closed off quarries with no services anywhere in sight, but when location hopping in a big city, we sometimes make Great Discoveries. Now, if we were foodies or restaurant bloggers, we would’ve most likely known about these places, but since we concentrated once again on filming locations only, they were beautiful, unexpected gems to us.

First, we gotta talk about Big Daddy’s Diner. We stayed in a fantastic hotel nearby (W on Union Square) for a couple of nights, and on our first morning we just googled something nearby and ended up at Big Daddy’s at 239 Park Avenue South. And boooyah, was it good! Their breakfast was so delicious that we went back two more times during the week.

We can warmly recommend the regular breakfast with eggs, tater tots, toast and bacon, but also the heavenly chicken-avocado sandwich and the milkshakes.

This particular Big Daddy’s is just around the corner from Union Square (there’s three of them in Manhattan, bless!) and a couple of blocks from our Daredevil filming location on 19th St. You can check out their menu and reserve a table on their website. We’d recommend doing so, just in case, at least during the weekends.

And then there’s Dough, which is conveniently located right on the Daredevil filming location on 14 W 19th Street. Our new friend Toni (Toniemcee on Youtube) took us there on the second morning for some donuts and swore they’re supposed to be the best in town. So off we went. And it was marvellous.

Their simple shop is good for both grabbing a quick takeaway or for sitting down to enjoy your sugary treat. You’ll get fresh coffee served out of a little hatch on the wall and a dozen or more donut flavors to choose from. We tried the sea salted chocolate donut and a regular glazed one, and couldn’t even finish them in one sitting.

So far, there are three Doughs in town. You can find the location information and plenty more on their website.

Avocados at law! This is the place where they shot the scenes for the young Matt and Foggy enjoying a night out. You have to take an hour’s ride on the train to get there, but we simply couldn’t skip doing this scene. The college is surrounded by a beautiful park area that’s just a short walk away from the subway, so it’s very easily accessible. 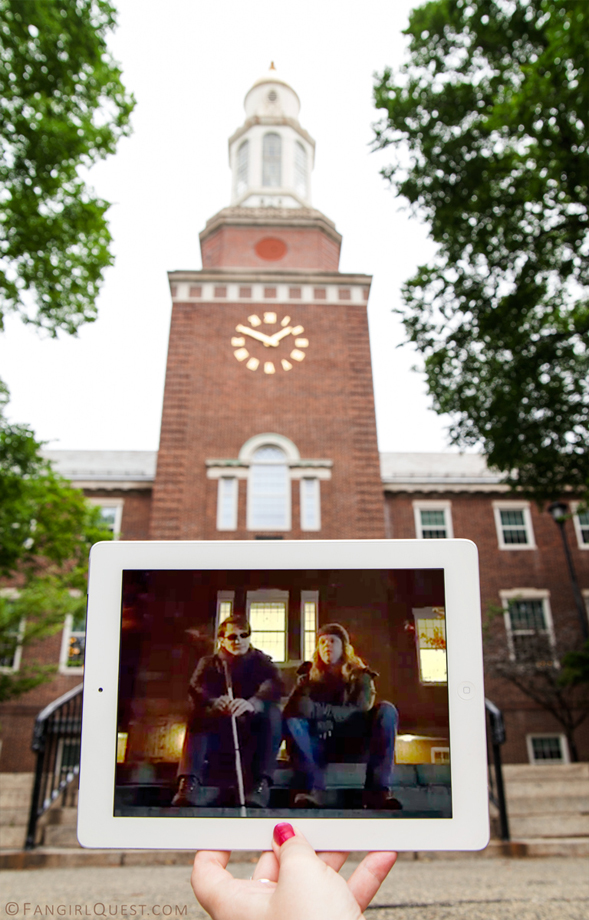 We ended up behaving like total dorks again, as we had to literallly lie down on the ground to get the right angle for our shot. Who wouldn’t enjoy a little roll-around on the burning hot asphalt after suffering and sweating from high temperatures all morning? Sure, it looks rainy in the photos, but the week was one of the hottest we’ve ever experienced, so don’t go believing the photographic evidence. Believe our word. And watch this video we filmed while doing what we do best. 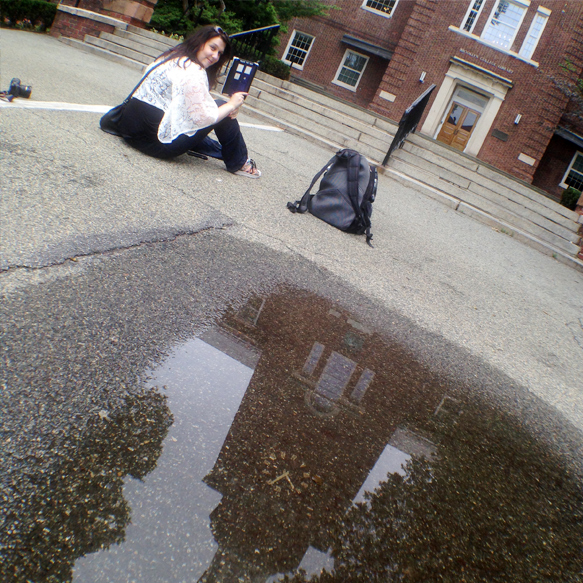 Satu sits on the ground at Brooklyn College (2900 Bedford Avenue). 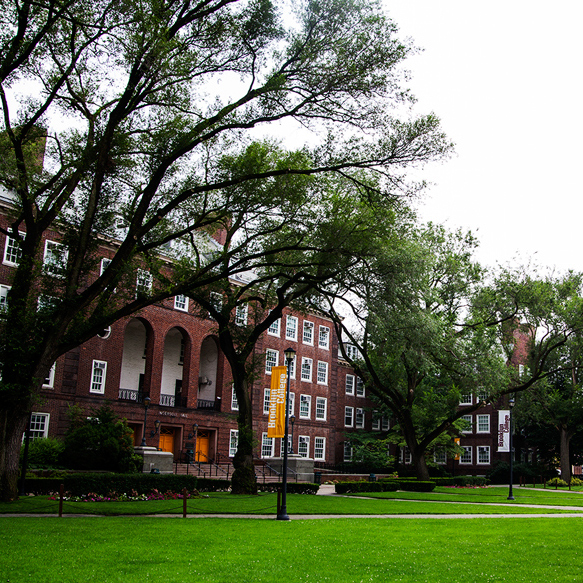 A rainy day at the Brooklyn College. 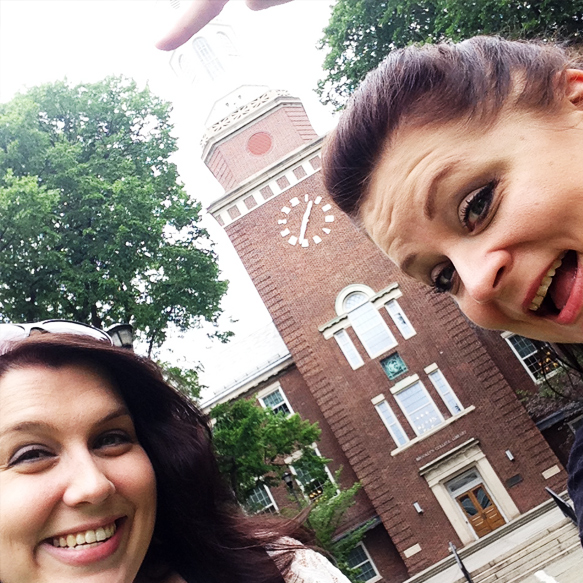 Our trip to Brooklyn Borough Hall was both a disappointment and a delight. We headed to this location to frame our amazing villain, Wilson Fisk (Vincent D’Onofrio) but were (quite unfairly) stopped from entering the premises. They had fenced off the whole front yard of the building for construction work, so we couldn’t get close enough to frame him giving his speech! Boo construction! Down with this sort of obstacles! The Daredevil filming locations need to be accessible to film tourists at all times! 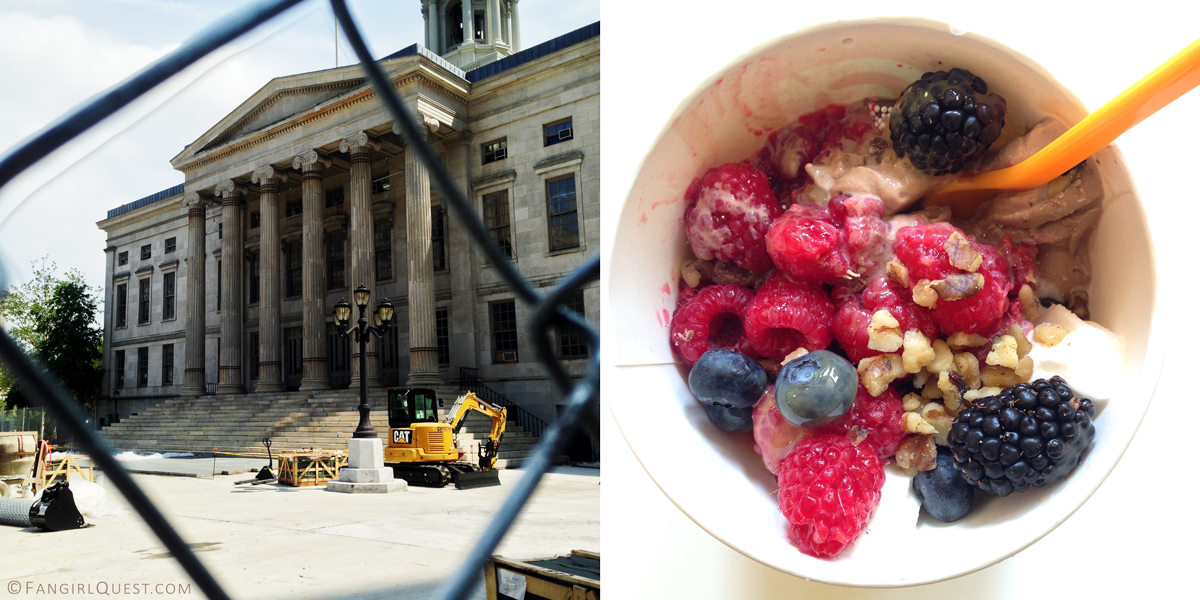 Oh well. It’s not the first time we’ve been fenced off, so we just snapped a few photos of the building through the chain-link fence and headed out in search of frozen yogurt. And man, did we find some…

Just around the corner from Borough Hall, on 345 Adams St they have Orange Leaf, a heavenly frozen yogurt shop where you can fill your cup with froyo, fruit, chocolate and all sorts of candy. So many to choose from! We’re not going to pretend like we settled for just one cup. No. We ended up going for seconds and frankly didn’t feel so good afterwards. But it was completely and utterly worth it. If only we had Orange Leafs in Finland and in the UK!

So, all in all, the trip to Borough Hall wasn’t a wasted one. Instead, it turned out to be the most delicious one out of all the Daredevil filming locations that day.

The Nelson & Murdock HQ was our last Daredevilish stop in NYC. There’s not much to see for an ordinary tourist as it’s just another street corner in Brooklyn, but for massive Daredevil lovers such as ourselves it’s an important one. 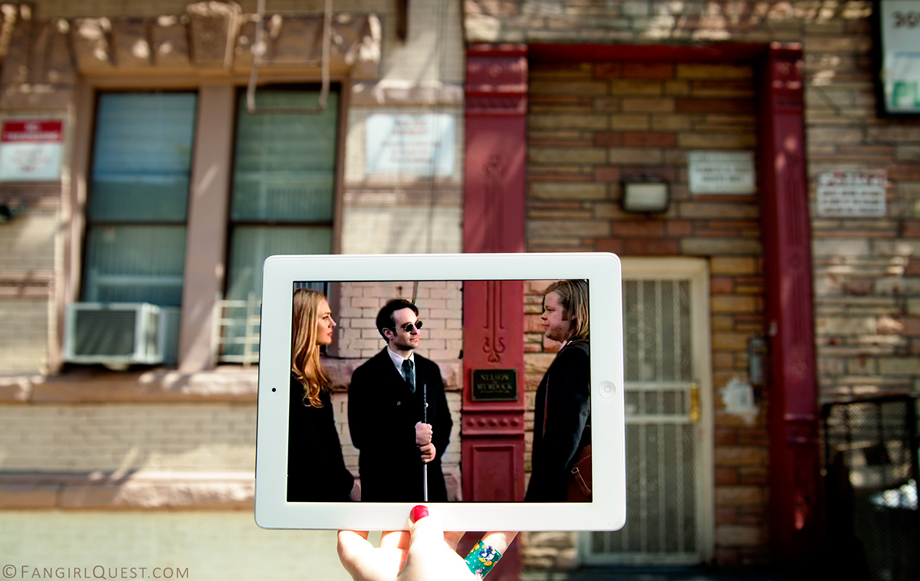 Nelson & Murdock with Karen in front of the infamous sign.

This is where we’ll travel after the show’s been on air for years and we all treasure it even more than we do now.

In my opinion, they should’ve left the sign on the wall permanently. In fact, we should’ve had one engraved and just put it up there when no-one was looking, then post photos of it all innocent and tell everyone it was left there to greet all the fans who go location hopping. 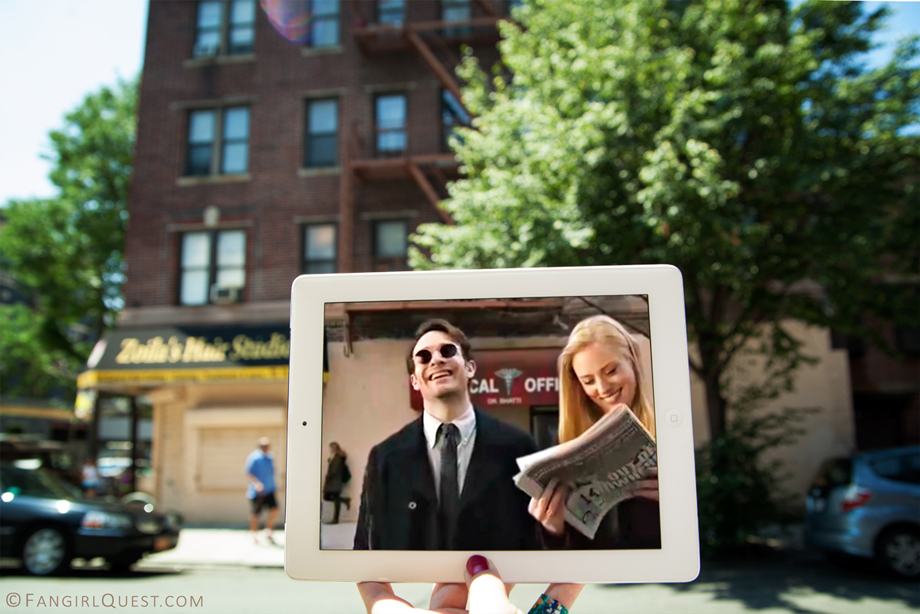 Deborah Ann Woll and Charlie Cox at one of the Daredevil filming locations in NYC. 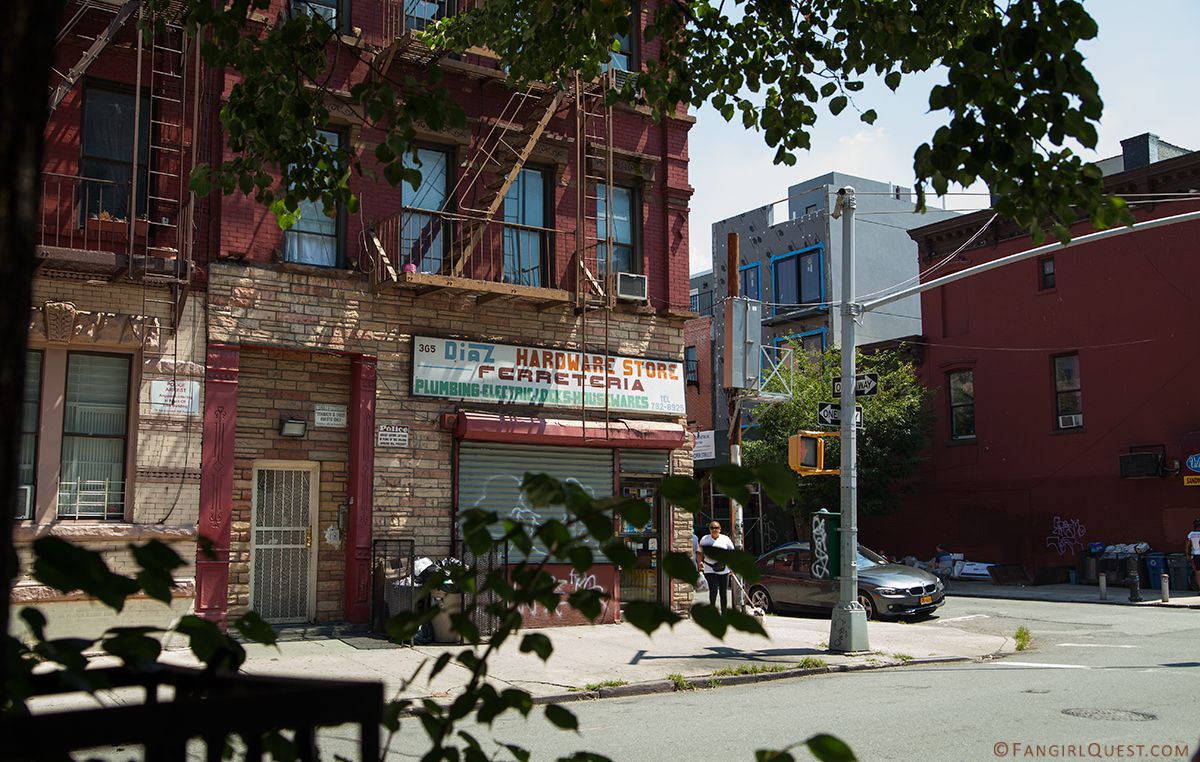 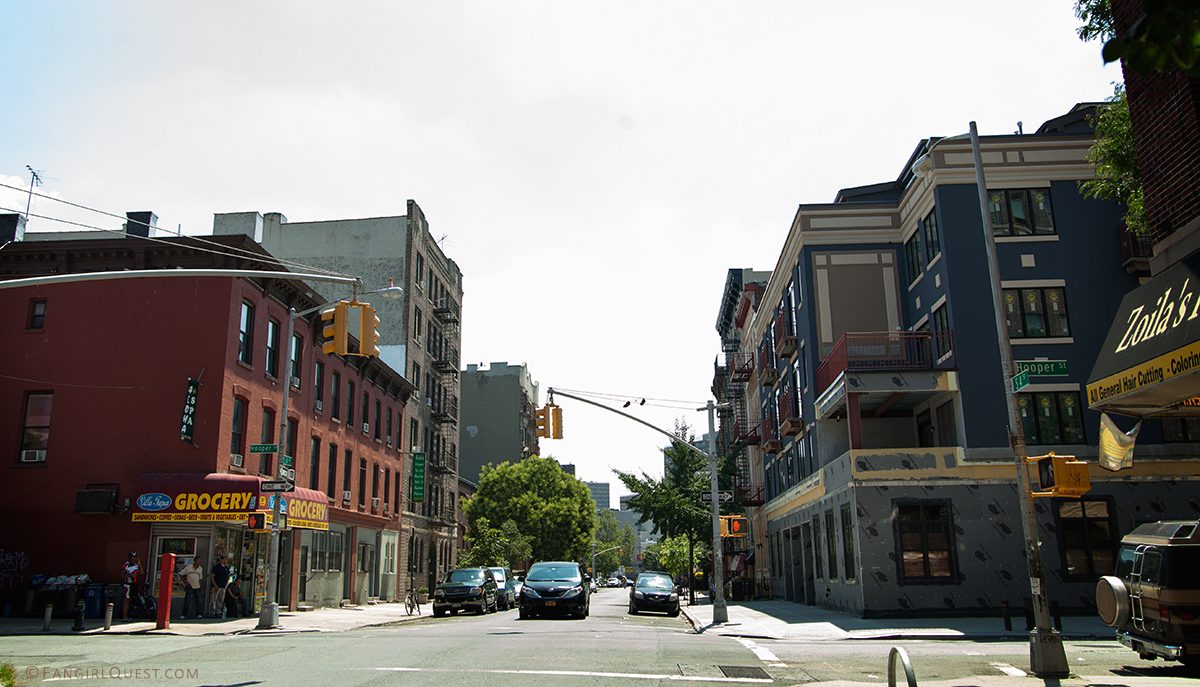 The NYC street where Nelson & Murdock’s office is located.

Daredevil filming locations for the next time…

Due to lack of time or complicated access we skipped a few of the Daredevil filming locations that are marked on our map below, hence the extra markers.

We really wanted to visit Rockefeller Center’s rooftop garden, where Fisk meets with Madame Gao, but couldn’t get access in such a short notice. It looks like a dream spot for film tourists like us. We also heard they don’t let people up there very easily, not unless you hire it for an event or your wedding.

(If you’re reading this, Rockefeller folks, you better let us up there the next time we’ll come for a visit, or else! …we simply won’t go there.)

We’ll be posting more fun things from our trip to NYC very soon, so don’t go anywhere! Just sit tight and stare at this screen. You’re allowed to refresh the page every now and then.