Birmingham, UK. It’s a city that doesn’t come up on the top of any “must travel destinations of the year!” lists. It doesn’t have any long, sandy beaches, nor does it hold any particularly famous, tourist tempting attractions. Even one of my all time favorite TV shows, Peaky Blinders, which takes place in Birmingham, didn’t actually even film there.

You could say a lot of vague, not very flattering things about Birmingham. It’s just another UK city smack in the middle of the country, not very well loved even by its own countrymen.

However… in a very sneaky fashion, without making too much noise of itself, Birmingham has actually made its way into our hearts when it comes to some Very Excellent Memories. 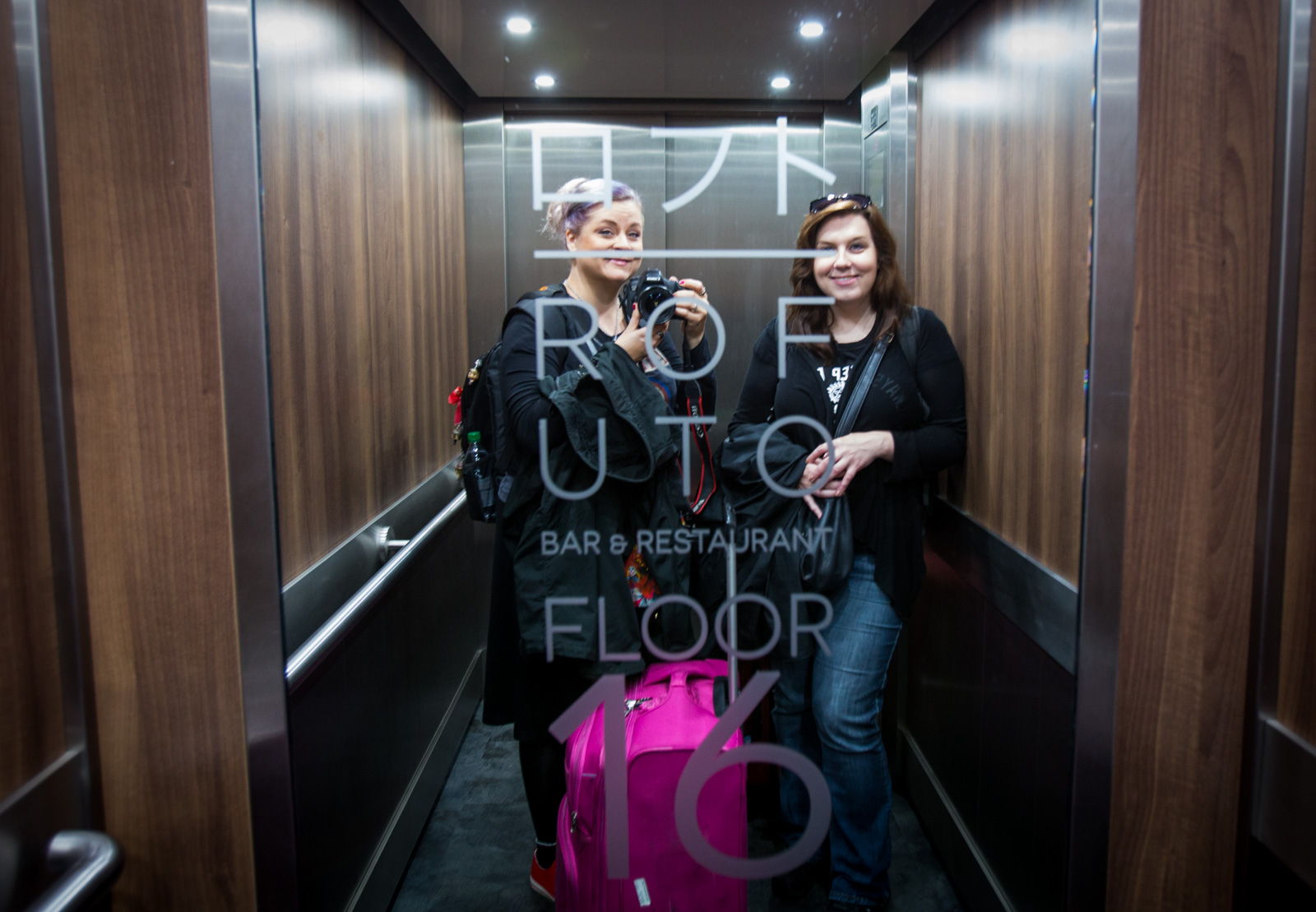 First, we attended a few amazing Supernatural conventions at a hotel near Birmingham’s busy convention center known as the NEC (aka The National Exhibition Centre). As many of you know, we adore this silly, long-running sci-fi/fantasy show with the full force of our fangirl hearts. (What is a “convention”? you ask. Well, in short, the TV show conventions are all about fans getting together for a weekend and often — if they’re lucky — getting to meet the cast of the show who have been flown in to entertain and meet&greet. ) 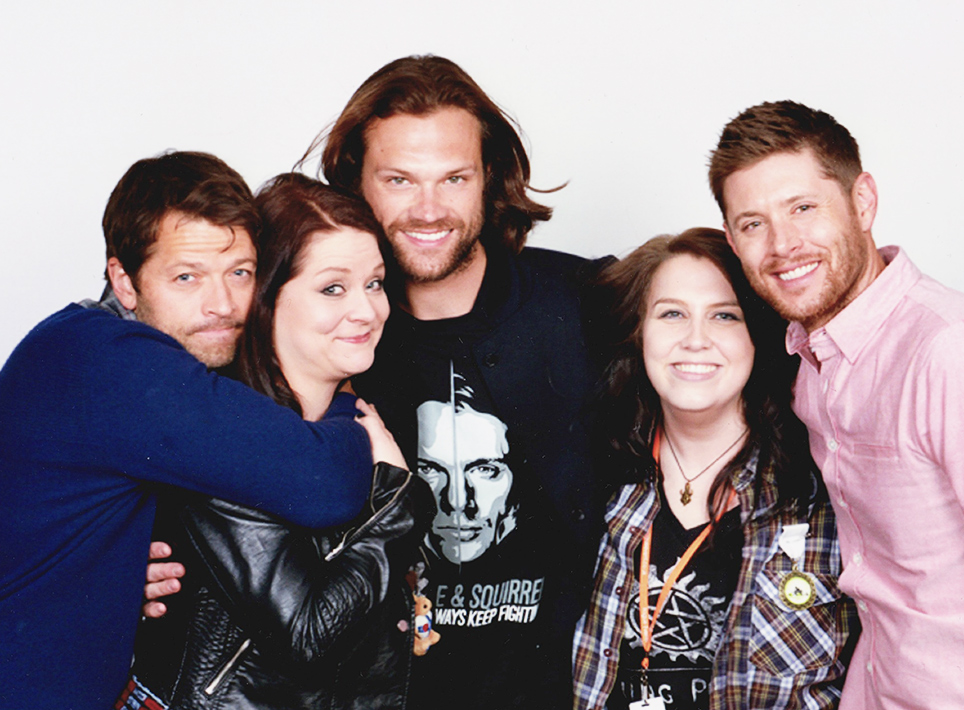 Fangirl Quest under the protection of Misha Collins, Jared Padalecki and Jensen Ackles at Asylum 14

Now, the cast of Supernatural does a lot of conventions: they attend several events a year in North America and some on this side of the pond as well. Just so we far-away fans get to join in on the fun too! And boy, did we join! Within two years, we spent three amazing weekends meeting and greeting our idols at these conventions that went by the name of Asylum and took place in Birmingham twice a year for the longest time.

And just like that, we’d visited the city of Birmingham for three times without even really wanting to.

Want to see more convention photos feat. the Supernatural actors? Because we have a LOT! Just follow this link.

Country music in Birmingham? You betcha.

Next, up came our most recent roadtrip in the UK. Now, this time the reason for us traveling to Birmingham was country music. Yes… you read that right. Some proper, good ol’, Southern style country music. We love it. And since a few well-known Nashville country artists decided to tour the UK, we, the fangirls, followed where they went.

And with that… we found ourselves in Birmingham. Making happy memories. Again. 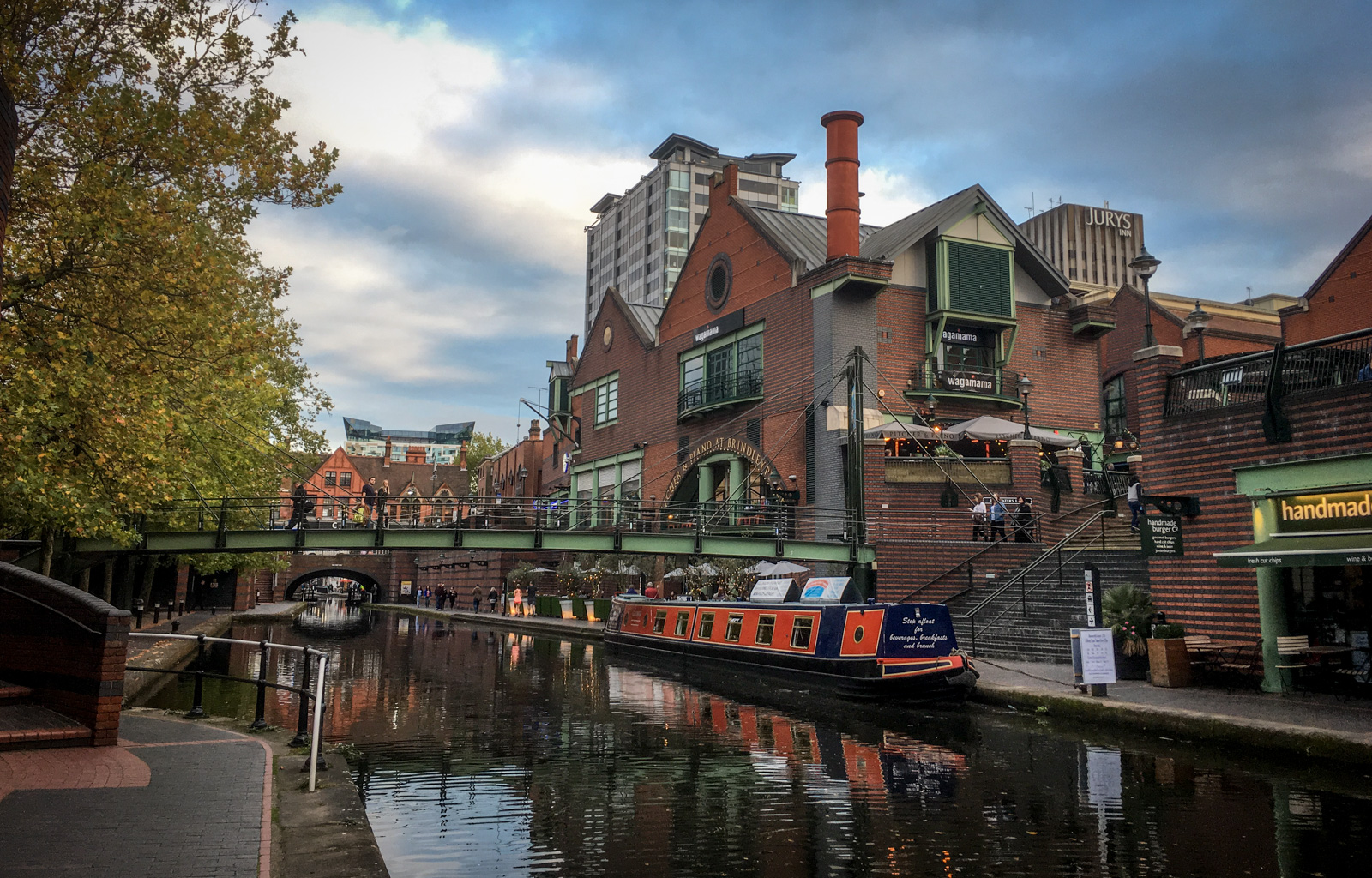 Birmingham – not too shabby!

The Nashville artists that visited the UK late last year were: Lady Antebellum, Randy Houser, Eric Paslay, Angaleena Presley and Michael Tyler. The first one, a band, toured on their own while the last three toured as a group, playing acoustic sets on stage at fancy venues. 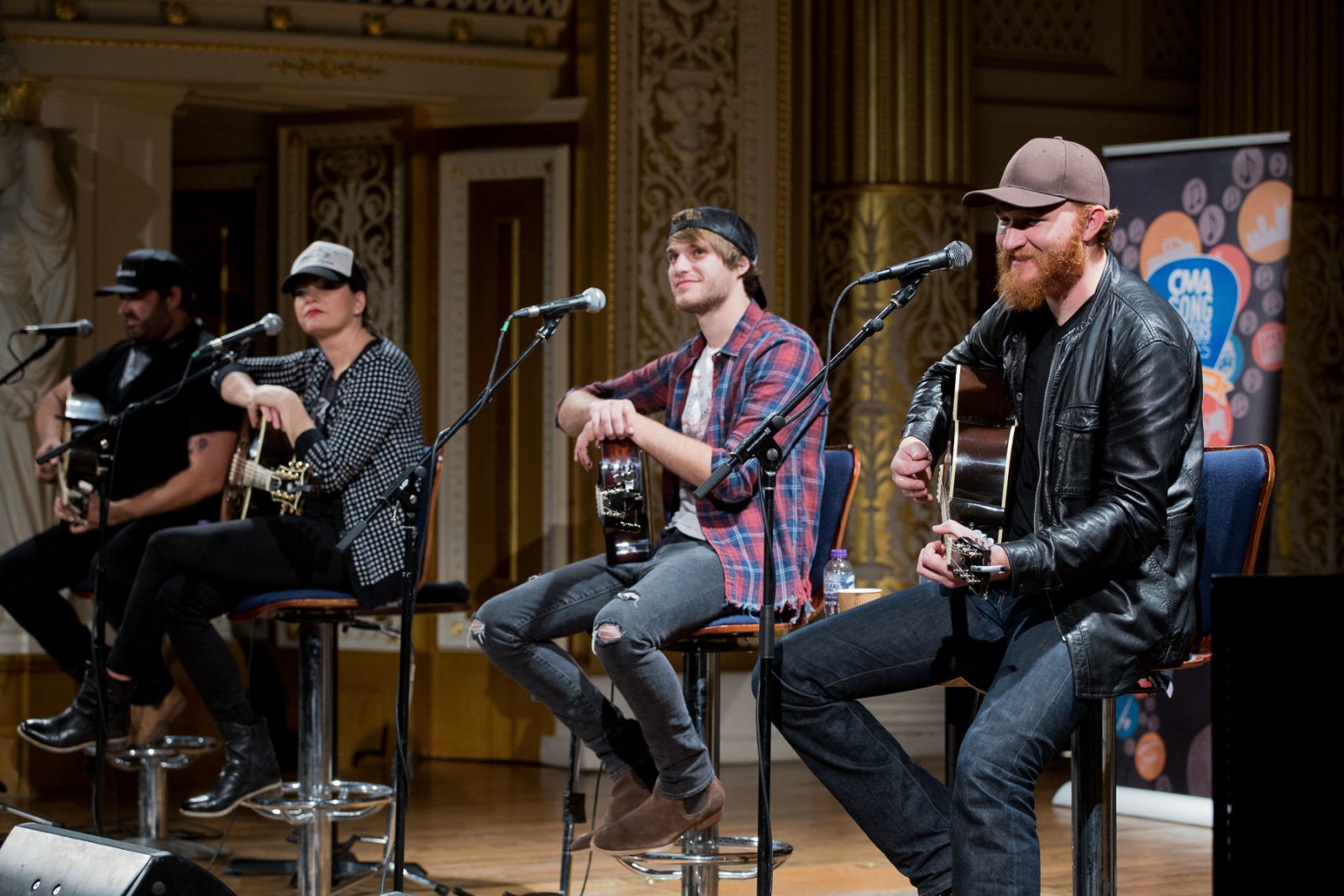 Check out my photos from the Houser + Paslay + Presley + Tyler concerts here.

In Birmingham, we attended an almost sold-out, stadium size Lady Antebellum concert and we got to spend the night in a beautiful, modern hotel near the venue (Arena Birmingham). All in all, it was a super short stay, but like I said… some happy memories.

First, let me show you our hotel because wow-zaa!

One of the best things about a hotel to us roadtrippers is usually great parking. And that was the first thing Park Regis Birmingham welcomed us with: a spacious parking lot right next to the hotel building.

Next, we checked in (swift and easy!), got our hotel keys and found these waiting in the room. Now, it might’ve been a special treat just for us travel bloggers, but whatever it was, it was super sweet. Like, literally. Snacking on macarons immediately calmed down our ticket stress levels (you know, because at this point we didn’t actually have tickets to the concert yet – just how we roll) and we managed to cool it and start checking the last minute ticket sales websites. 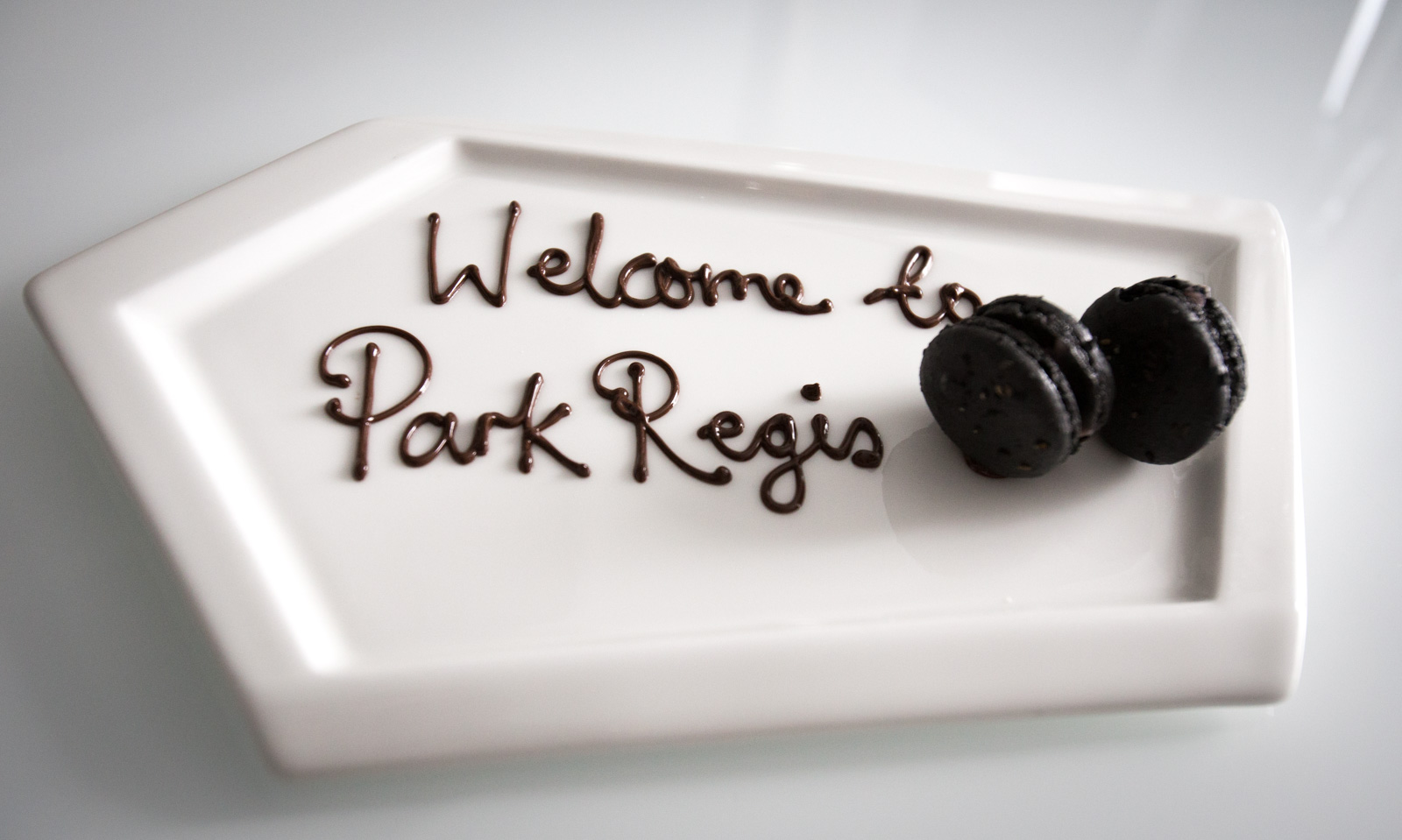 Sweet treats at Park Regis Birmingham. Yes, of course we ate some of the lettering.

We got lucky: a last minute ticket site called Viagogo actually HAD some random seats here and there, so we went for the cheapest ones. Figures; our travels are often a very peculiar mix of low budget and these beautiful hotel rooms! 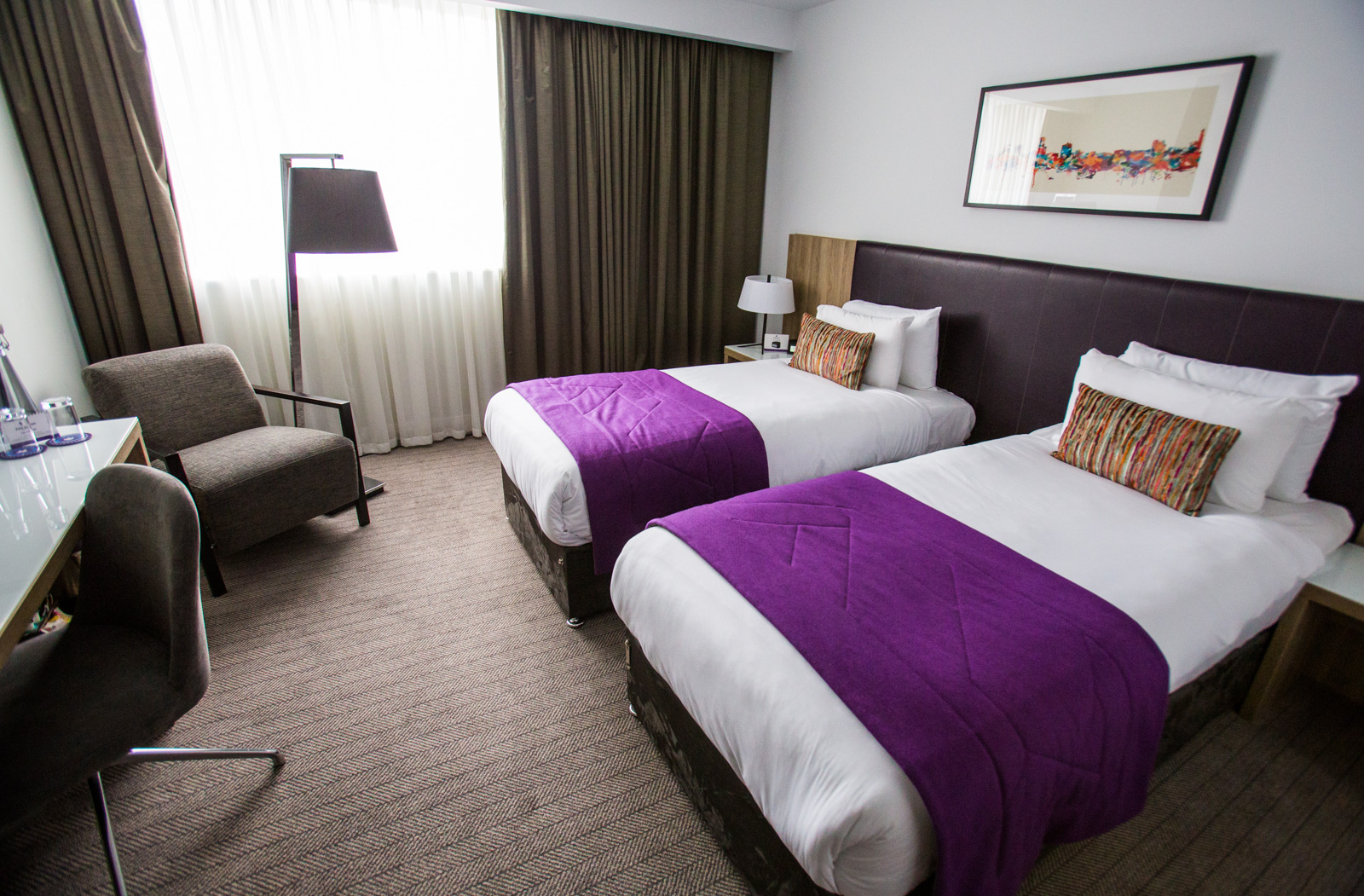 But before we dive into the excitement of a big concert, a few more beautiful photos from Park Regis. Just because, for once, a hotel actually had stuff to take photos of. Like these stunning lounging areas, restaurant and bar; 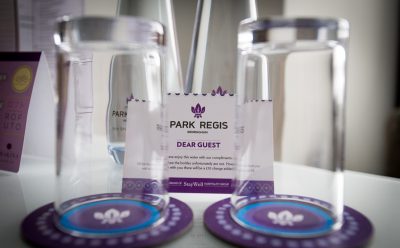 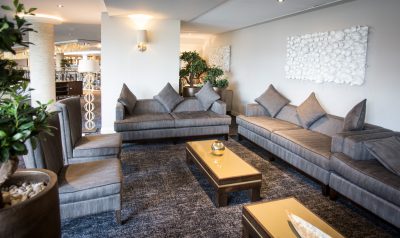 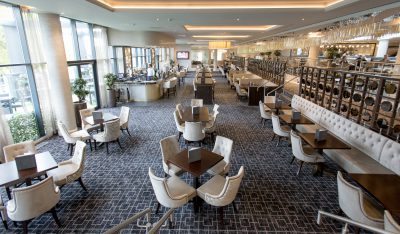 And these absolutely brilliant design lamps and decorations all over. So beautiful!! It felt like such a waste spending just an hour or two at the hotel before heading out again. I could totally imagine spending a couple of days tapping away on my laptop, composing blog posts of Birmingham while sitting on one of these sofas or drinking martinis at the bar.

If you’re ever in Birmingham and are looking to have some luxury in your lives, we warmly recommend checking out Park Regis! Their website has all the information, booking and list of all the things they offer… apart from their comfy rooms. 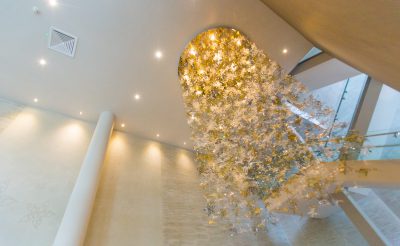 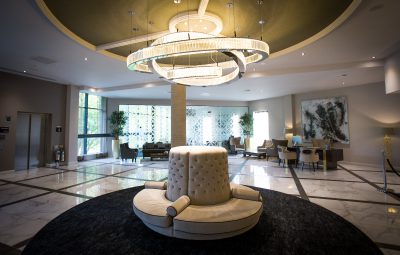 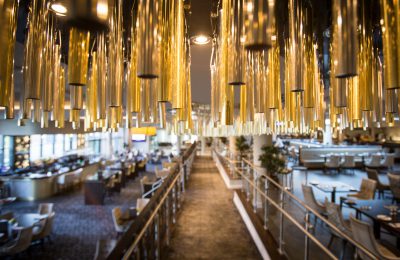 But, off we went. Outside, to the streets of Birmingham, looking like a couple of manic fangirls with their minds set on seeing their idols in the flesh.

(Probably because that’s exactly what we once again were.)

Where is Viagogo Birmingham located?

That’s a very good question, one we also asked after purchasing the tickets. You see, the way this Viagogo service works is, they don’t actually have any of their own offices. Like, probably anywhere. Or anywhere that we know of? But instead, they use printing services and post box offices, things like that, and somehow it all works out for those who buy tickets to events very last minute.

Like the two of us. But anyway, just in case anyone else ends up attending a concert and is looking to buy some Viagogo tickets in Birmingham (important to write this in bold for those search engines), here’s a tip…

Your tickets won’t be delivered to the post office. The receipt said MailBox and gave us a certain street address, so off we went. And on that street corner, there’s a Post Office. So you know, MailBox + address = kaching, we thought, and inside we went and joined the longest-ever queue like good little citizens.

Only to find out that MailBox isn’t actually a little mail box inside a post office, but an actual print / postal box service across the street. So, a totally different shop. Here, let us point it out with arrows. Post office on the right, MailBox on the left. Very easy once you know what you’re doing. 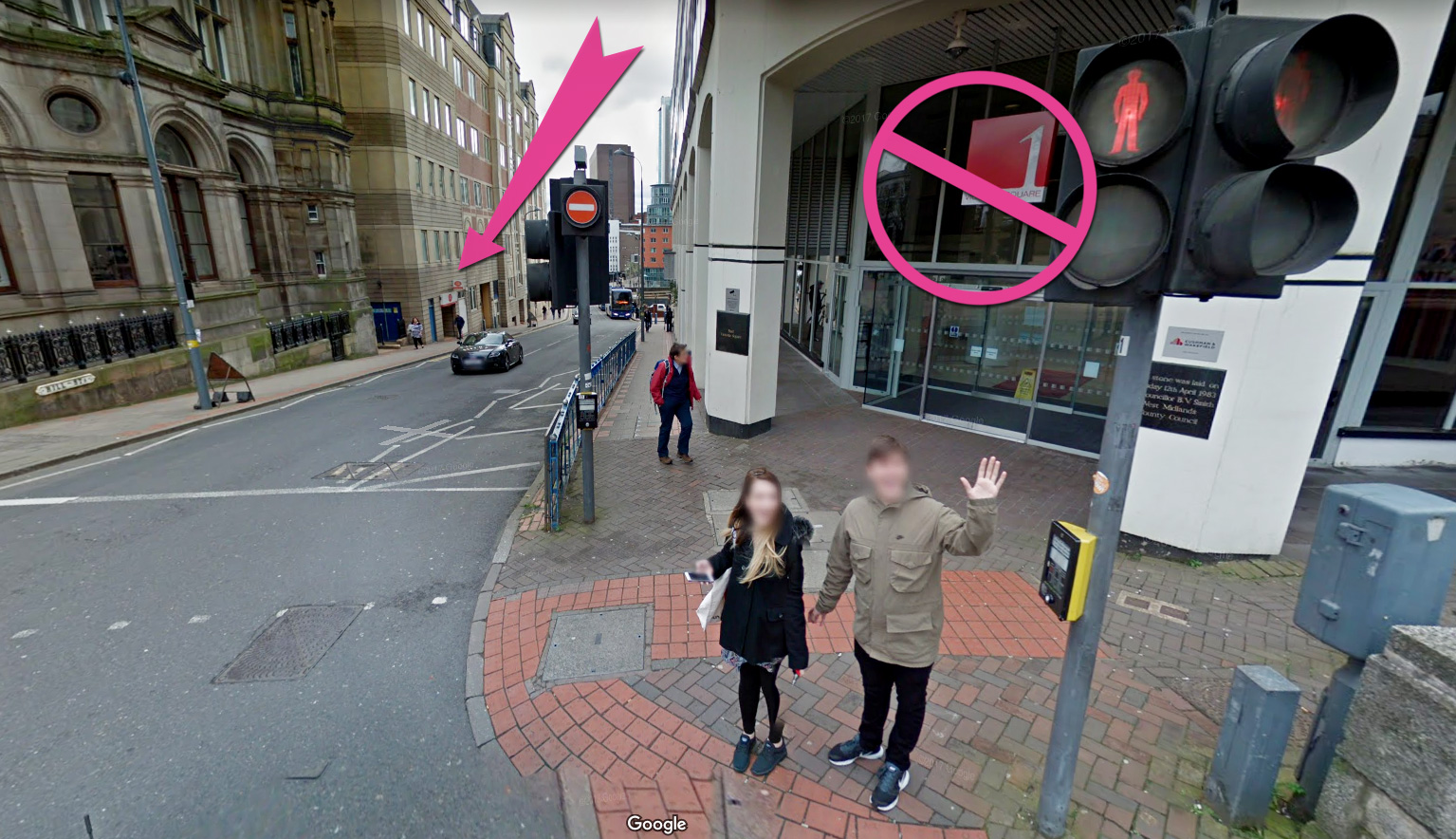 After this informative, very specific local tip, let’s move on to the concert…

After picking up our lastest-minute-ever tickets from MailBox / Viagogo, we had a quick dinner at a local Wetherspoons restaurant (again, great value meals for the low budget fangirls!) and took a walk to the venue, just a few blocks away.

Mind you, we had never seen this side of Birmingham before, even though we’d been there several times already. But somehow, we always missed the central parts of the city, always going straight to the convention center or the airport or the train and bus stations. And we were amazed.

This beautiful canal thingy, it’s just there. Looking amazing. Especially in the rare glimpse of winter light coming from the late afternoon sun. We kept walking short bits and stopping for photos every two minutes. 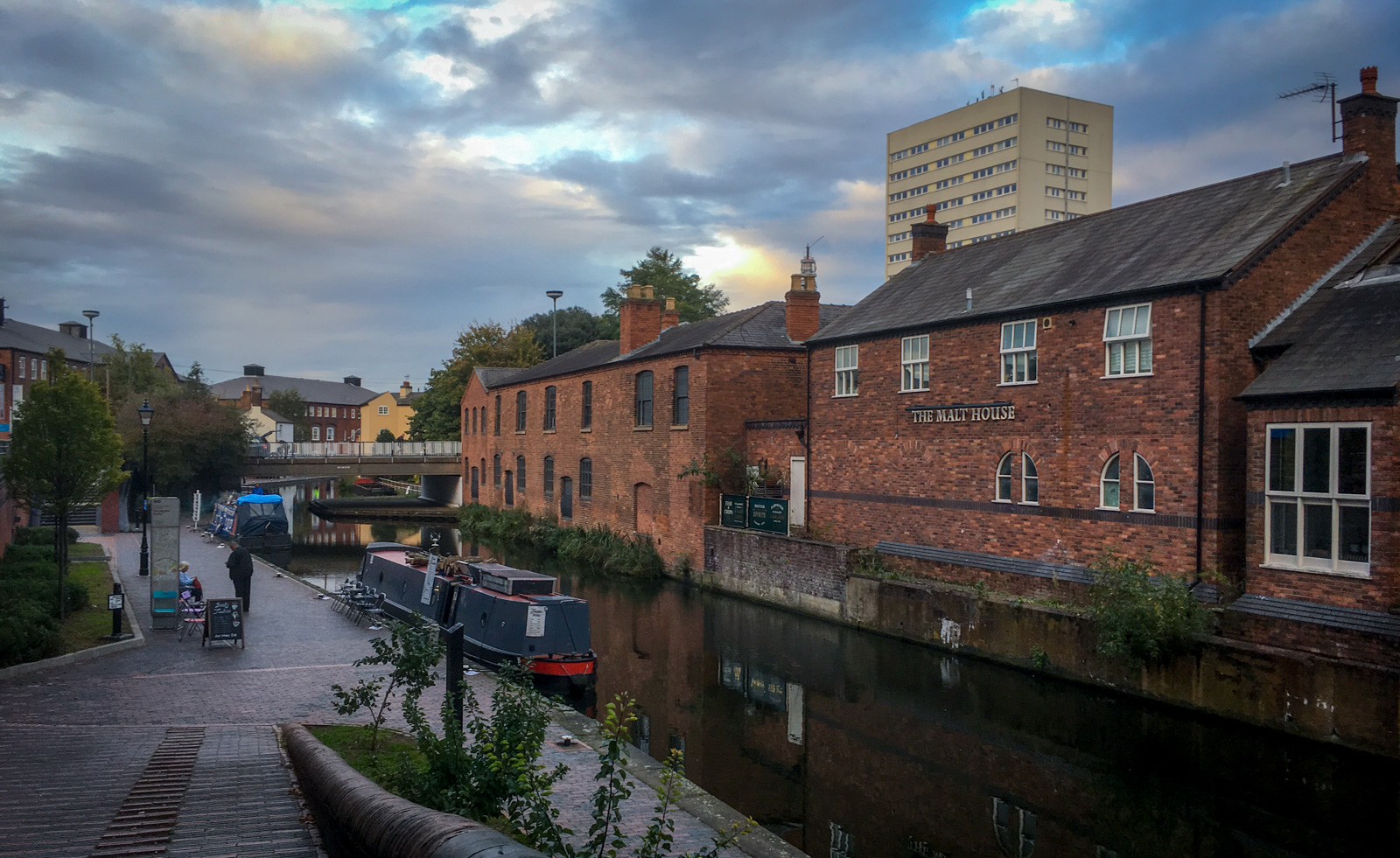 Frankly, I’m a little insulted for good ol’ B’ham now! Why aren’t you filming in here, Peaky Blinders? What gives? You could totally use these lovely surroundings for the Shelby family adventures. A nice little gangster shooting around the canal, eh? 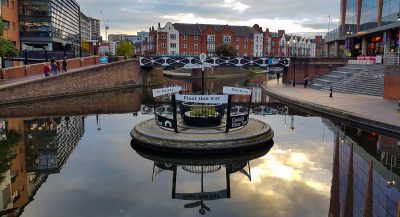 Our arena for the night!

After all this ticket adventuring and canal marveling… THE CONCERT!

Despited our low-budget, can-barely-recognize-band-members seats, we had a marvellous time. The band kept the audience going, we danced, we sang, we were so happy to be there. The setlist consisted mostly of their biggest hits and songs from the new album, but that was just the way we wanted it.

We weren’t even that sad about the far and high seats in the end, as we had plenty of room to jam on our feet and we knew we were going to attend another concert in London later. 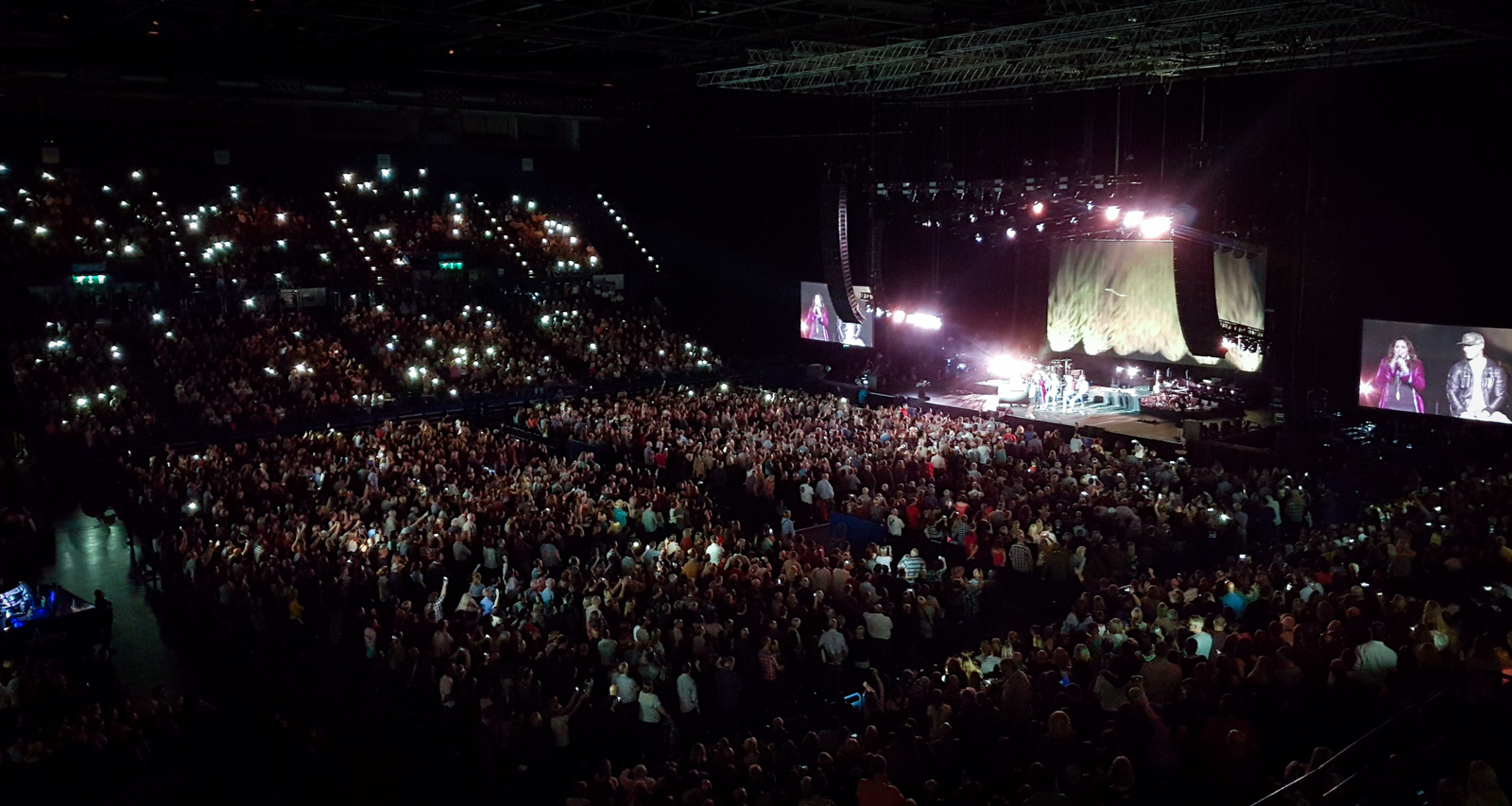 That night, we walked out from the Arena one experience richer and realized: this Birmingham place, it’s not too shabby after all! In fact, we have to say we’re sort of fans now.

During each of our visits we’d been treated nice, we’d stayed in fancy hotels, we’d met some amazing people, we’d been nourished by some pretty British pub food, but most importantly: we only really have amazing memories from Birmingham. Absolutely amazing, simply unforgettable.

And we’re pretty sure this wasn’t the last time we came. Just watch us. We’ll be back in Birmingham experiencing something fun soon again.