Atlanta – The Hollywood Of The South

The iconic view of Atlanta from The Walking Dead, now without the tablet.

In recent years, Atlanta has become a major player in the film industry. Since 2008, Georgia’s generous tax credits have attracted the production crews of more than 140 films and shows to the city and its surrounding areas. The small town of Covington, GA may have coined the term “Hollywood of the South” but it has now become synonymous with Atlanta. We were originally drawn to the city by one of our favorite shows of all time, The Walking Dead, but discovered there’s so much more this movie mecca has to offer! 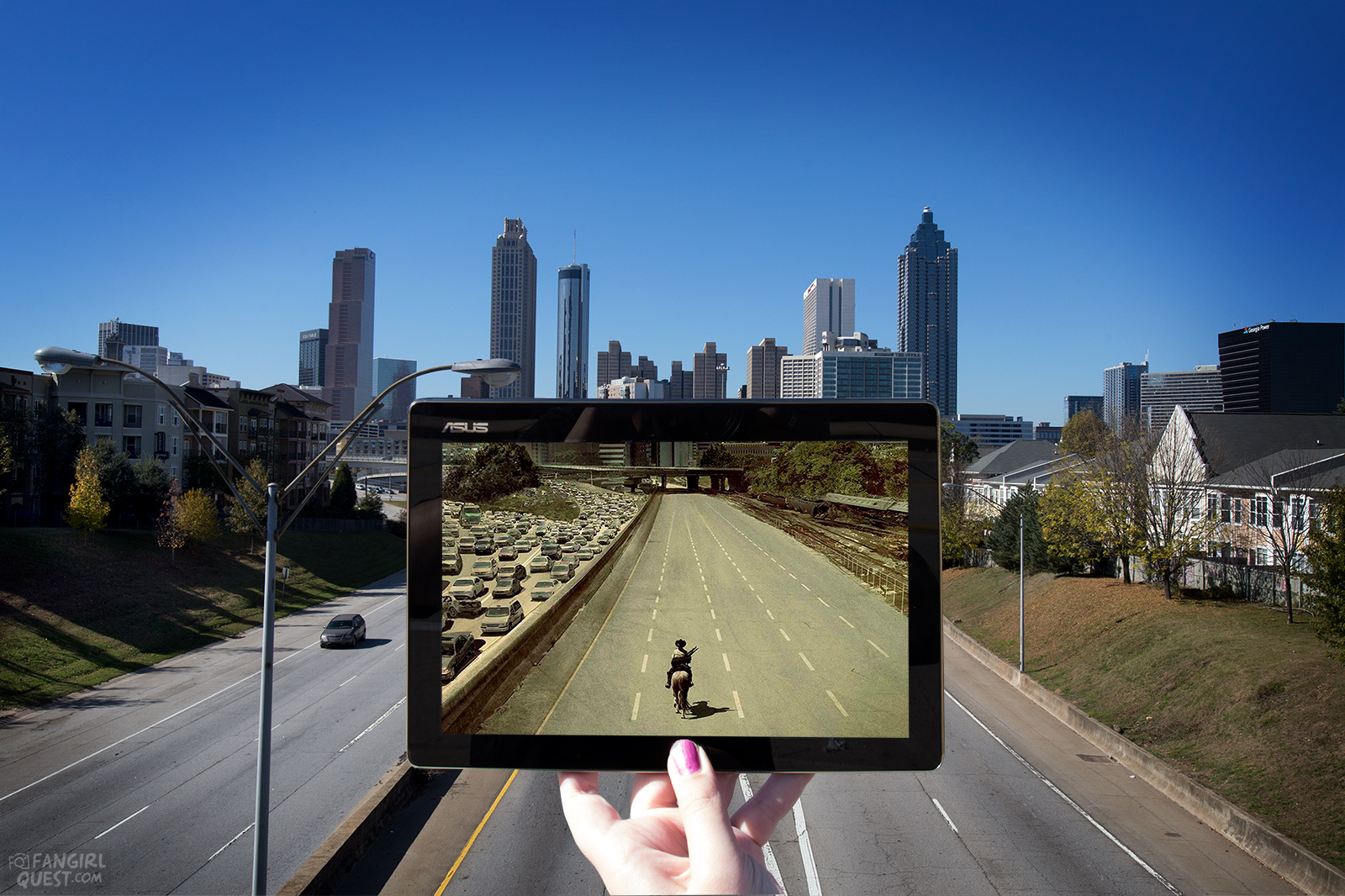 One of the most iconic scenes from The Walking Dead features the skyline of Atlanta in the background.

The list of productions that call Atlanta home is impressive, from the Hunger Games series to Marvel’s latest blockbusters. It’s almost impossible to walk even a few blocks in the city without running into filming signs. In addition to movies, there are several TV shows that have set up permanent camp in Atlanta. Both seasons of Stranger Things were filmed all around the city. And when we say all around, we mean ALL around. Part of the reason we could only make it to a couple of their locations during our short visit was that they are scattered in every direction and driving in Atlanta can be a time-consuming activity… 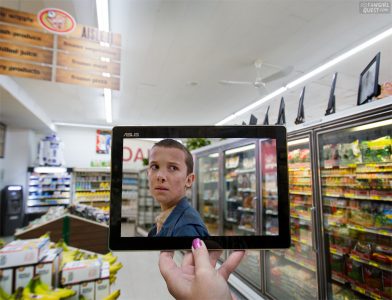 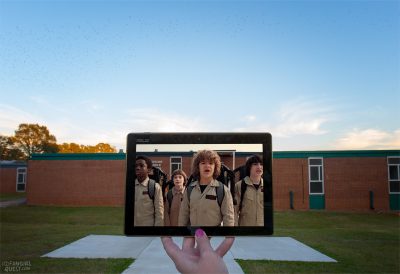 Lucky for us, some of the locations from Captain America: Civil War and the truly inspiring movie Hidden Figures can be found a bit closer to downtown. The Walking Dead is currently set up in Senoia, about an hour south of Atlanta, but they’ve also filmed loads of scenes in the city. 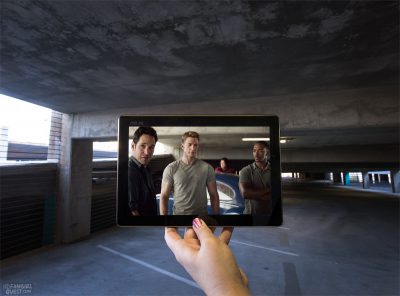 This scene from Captain America: Civil War supposedly takes place in Berlin but was actually filmed in a parking garage in midtown Atlanta 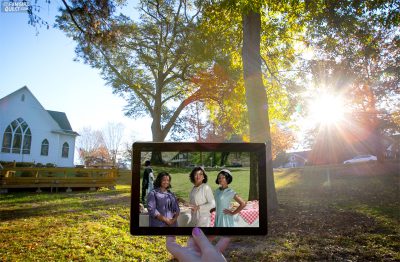 Hidden Figures was one of our favorite movies of 2016 and we were so happy we got to sceneframe it in Atlanta! 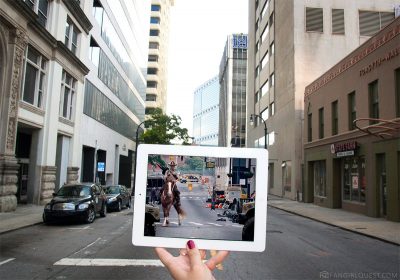 The Big Zombie Tour with an actual zombie

Atlanta Movie Tours offers themed location tours of the city. They have several that we were interested in but in the end, we couldn’t resist the call of The Walking Dead. What’s really cool about their Walking Dead tours is that they are led by people who have actually been on the show, mostly as walkers. Our awesome guide Charlie has been on the show several times over the years, you may even recognize him from the scene where Rick and Daryl gut a walker while looking for Sophia in season 2. We visited several locations during the three-hour tour, some familiar ones and some we didn’t even know about. The best part of the tour though was easily Charlie and all his amazing and often hilarious behind the scenes stories from the set. 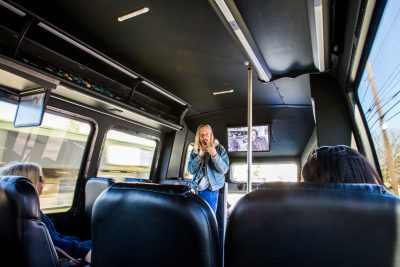 On the comfy tour bus with Atlanta Movie Tours and our guide, Charlie. 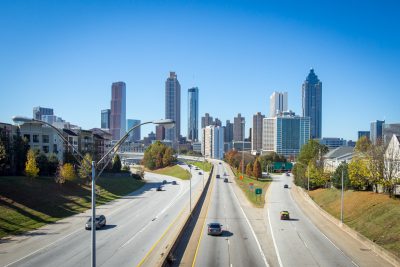 The iconic view of Atlanta from The Walking Dead, now without the tablet. 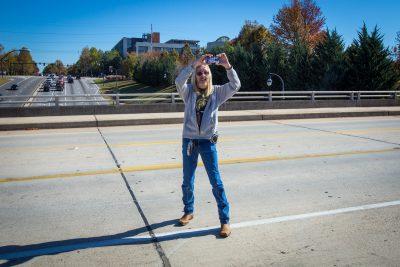 Charlie taking a group photo of us at the Jackson Street bridge. 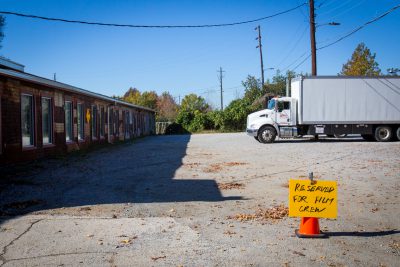 Well of course it is. We can’t even go on a tour without bumping into filming!

Stuff and things to do in Atlanta

There’s more to Atlanta than filming locations though. We’ve visited the city before, but this was our first chance to be proper tourists and experience some of the many attractions it has to offer.

I’m not ashamed to admit that I was most excited about the World of Coca-Cola. An entire experience built around the best beverage in the world? Complete with free tastings? Sign me the heck up! The visit begins with a complimentary can of coke while you wait to enter, so needless to say, they had me at hello. 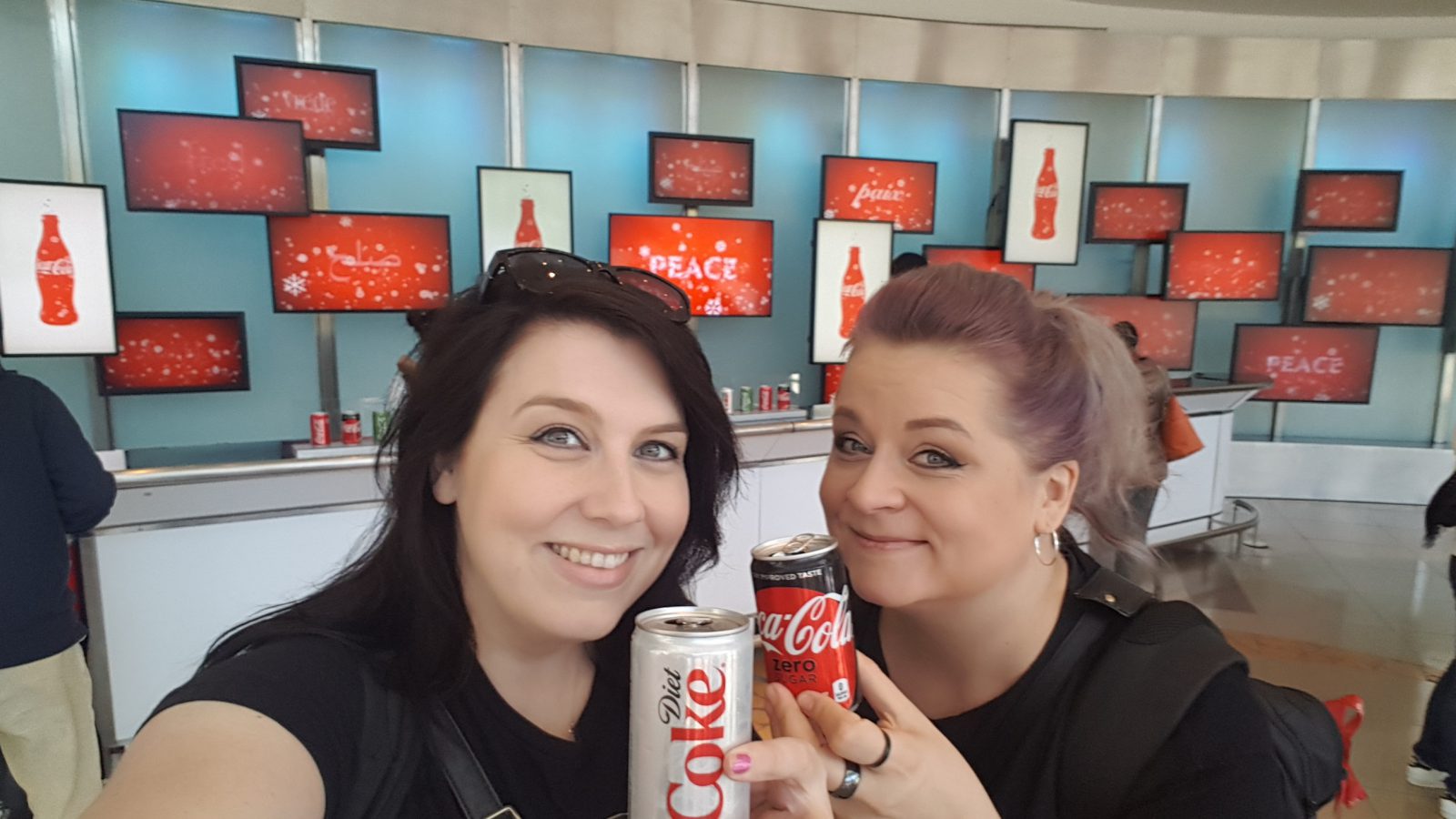 Two very happy bloggers with their complimentary cans of coke.

Once you get inside there’s lots of history and exhibits to explore. You can also see (the outside of) the vault where the only physical copy of the original Coca-Cola recipe is kept. The best (and most disgusting) part of the experience however is the tasting room. There are dozens of different soda flavors from around the world that you can try and Coca‑Cola freestyle machines with over 100 taste combinations. While some of the international flavors are good and others not so much, rest assured that if you taste each and everyone, you will feel sick. Trust me, I’m speaking from experience. 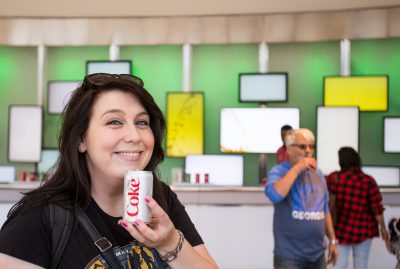 Forget Disneyland, this is the happiest place on Earth! 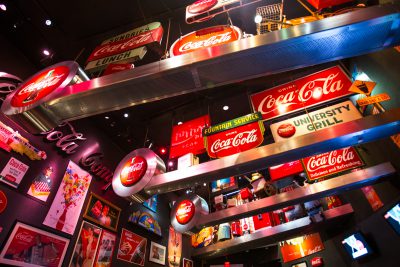 The waiting area for the introduction video is full of Coke memorabilia.. 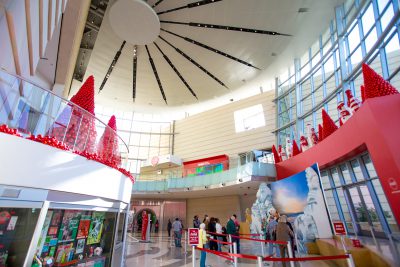 The World of Coca-Cola was already decked out for Christmas 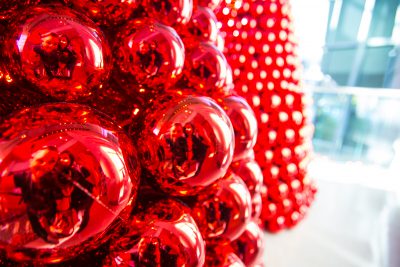 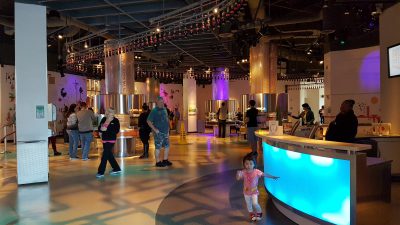 The legendary tasting room is home to flavors of soda from all over the world. 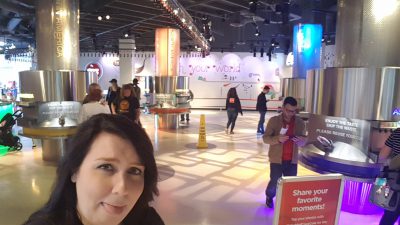 That feeling when you’ve tasted dozens of different sugary drinks…

Right next door to the World of Coca-Cola is the Georgia Aquarium. We couldn’t resist the urge to pop by for a quick visit, even though we have some mixed feelings about aquariums. Marine life is fascinating and for most people, these places are the only chance to ever get close to these amazing animals. The facilities serve an important educational purpose and also do lots of conservation work. 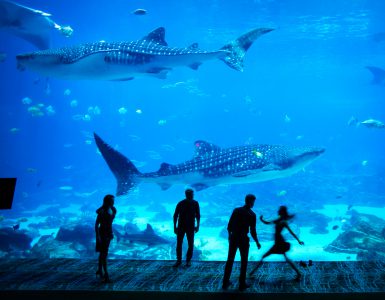 Georgia Aquarium is one of the few aquariums in the world to have whale sharks. 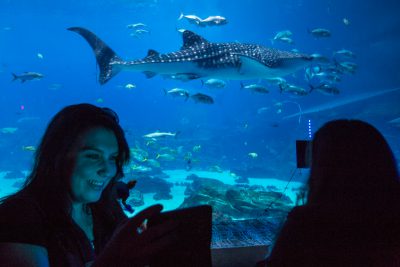 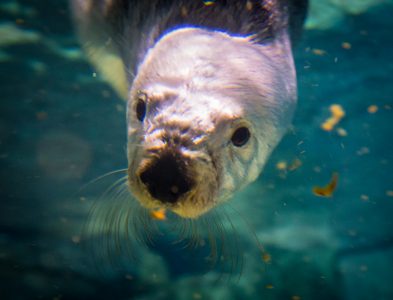 A curious and cute little otter at Georgia Aquarium 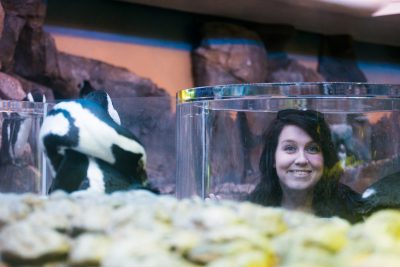 However, there is no question that at least some of these animals don’t exactly thrive in aquarium conditions. The documentary Blackfish made it clear that killer whales don’t belong in captivity. It’s also hard to imagine the massive whale shark being suited for life in a tank, no matter how big. Having said that, seeing one of these majestic creatures live and up close was a truly breathtaking and unforgettable experience. Like we said, mixed feelings.

The moving walkway of the Ocean Voyager at Georgia Aquarium is an incredible experience!

We also got to tour the beautiful Fox Theatre. The massive and elaborately decorated theater has a fascinating history. It was almost demolished in the 70’s, when multiplexes left old neighborhood theaters without customers. Luckily, the residents of Atlanta sprang into action and created a “Save the Fox” campaign to preserve the old building. The very successful campaign raised 3 million dollars and in 1975 the Fox opened its doors again. Later it has become a popular venue for red carpet premieres, including one for Captain America: Civil War. 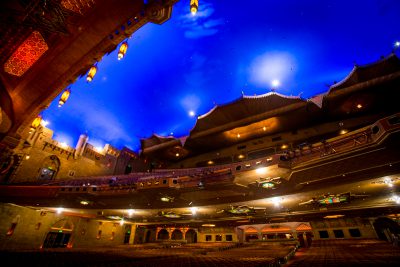 The interior of the Fox Theatre has a mystical Middle-Eastern vibe to it. 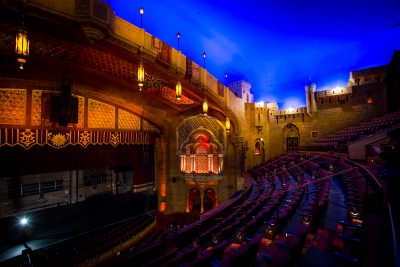 The amount of detail in the decorations is just incredible.

Our home away from home in Atlanta

We arrived in Atlanta late at night, thanks to a delayed flight. After long lines at immigration and driving through hectic traffic, nothing could’ve made us happier than finally getting to our lovely hotel, the Sonesta Gwinnet Place. Exhausted, we barely had energy to do more than fall into the super comfortable beds and pass out. In the morning we woke up well-rested and ready to tour the hotel. Sonesta is not only a full-service hotel, it also offers studio and one-bedroom suites for those looking for extended stays. The best part about these suites? They all come with full kitchens. We love eating in restaurants, but sometimes when you’re on the road for weeks on end, there is nothing better than a home-cooked meal. Having the opportunity for that at a hotel is priceless! If you’re heading to Atlanta, check out the availability and rates on the Sonesta web site. 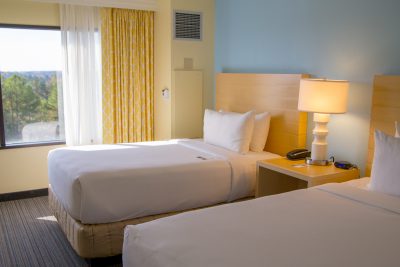 The extended stay suites at the Sonesta Gwinnett Place have a lovely, serene decor. 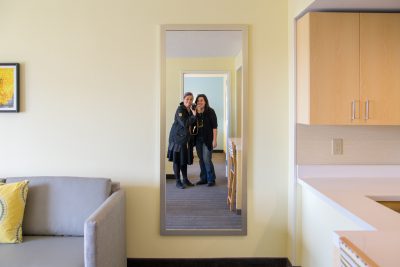 It’s easy to smile after a good night’s sleep. 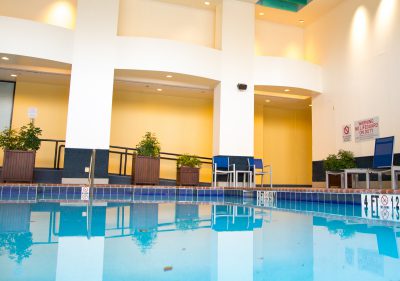 Sadly it was a bit too chilly for the indoor/outdoor pool. Maybe next time!

This is a collaboration post: We worked with Discover Atlanta and Sonesta Hotels for this post, but the content (including photos, opinions and the experience itself) are 100% our own. We keep it honest at all times. One simply can not buy our love! ⭐