Only In Minnesota: 14 Fun Experiences

What is #AloneTogether about?

#ALONETOGETHER weaves a virtual link between Kiasma’s visitors and the artists. From 12 April 2017, LaBeouf, Rönkkö & Turner will spend a month in three remote cabins somewhere in Lapland, entirely cut off from other people. A video link to a small cabin installed in the gallery is their only point of contact with the outside world.

Inside the Kiasma cabin, the public can speak directly with the artists, who can communicate with visitors—but not with each other—by text. A live video from the gallery appears above, displaying the real-time text communications from the artists as a continuous stream.

What I expected #AloneTogether to be:

A short, awkward encounter with an actor/artist who I really like, along with his talented besties. I planned on saying a few words, thanking them for their work and then stumbling out giggly and happy.

What #AloneTogether actually was:

An hour of touching stories from complete strangers in a small, dark, warm and safe place, where everyone was made feel welcome by the three artists on huge screens and by the regulars who had spent several hours in the cabin with the trio… and each other.

Here’s how it went.

When I heard LaBeouf, Rönkkö & Turner were coming to Finland, I was so, so excited. I wanted to go and see their thing immediately, then decided I’d have to find someone to go with me. In the end, it looked like I was going to miss it completely. I just didn’t have the guts to do it. Why was I afraid? I’ve met or interviewed dozens of my TV & movie idols and favorite musicians in person, so surely I couldn’t be nervous about talking to Shia LaBeouf via a video stream?

Apparently I was, though. It took me until the very last day to go. I still didn’t have the courage to go alone so I pestered my (other) best pal Timo to go with me. After a few whinging audio, video and text messages later I had myself a little cabin date.

As we were buying our tickets, a young man came to the counter and told the staff that “people are getting drunk in the cabin.” We laughed because yeah, this sounds very Finnish alright.

When we arrived to the room where the cabin stood, the security guard was already escorting the man out. 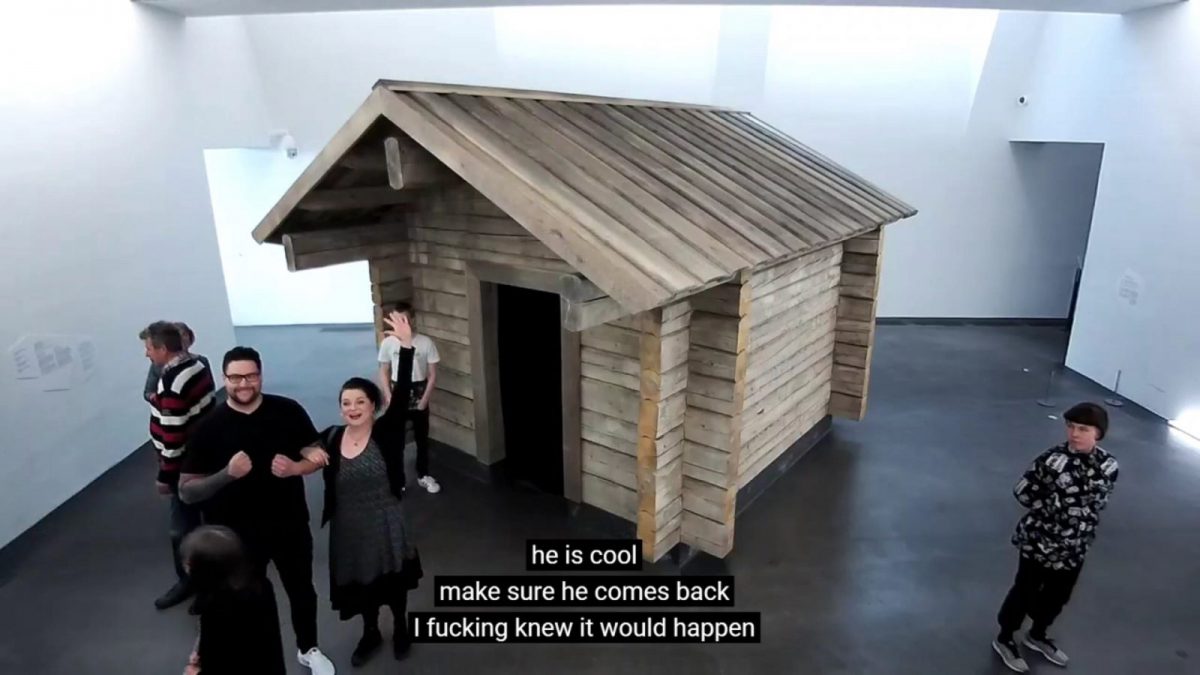 We stopped in front of the camera outside (as Satu had told us to wave at it) and then had a peek in. Inside, the trio on screen and about a dozen museum visitors were discussing the drunk guy. The artists all seemed really upset that the man had been asked to leave, saying he was such a nice guy, totally harmless, a legend! 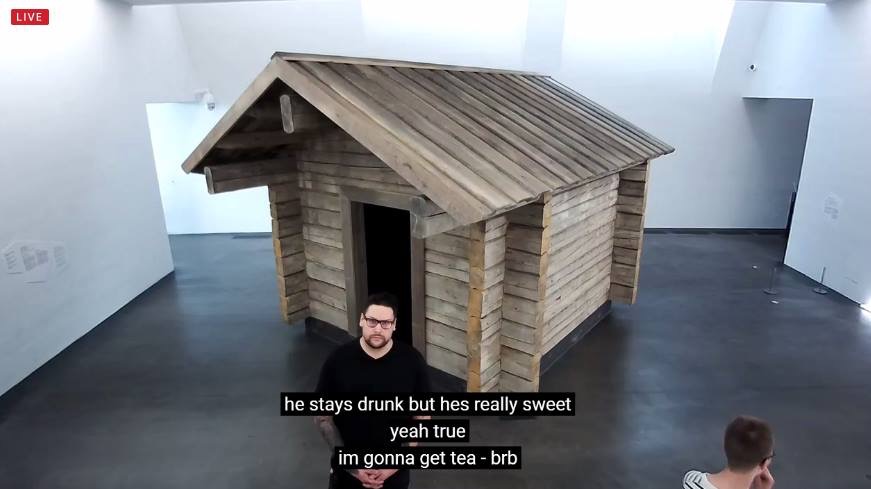 It quickly became clear that most of the people sitting on the floor were regulars. They knew each other’s names, and so did LaBeouf, Rönkkö & Turner. Other museum visitors often had a quick look, but not many stepped inside for more than just a few minutes.

Timo came in with me, but turned around and left quickly after (and did this very weird stare at the camera which my pals watching online beautifully captured), as the cabin was quite crowded. I found a little spot in the back for myself, and there we all were, gathered around the screens like a big family in front of a television. 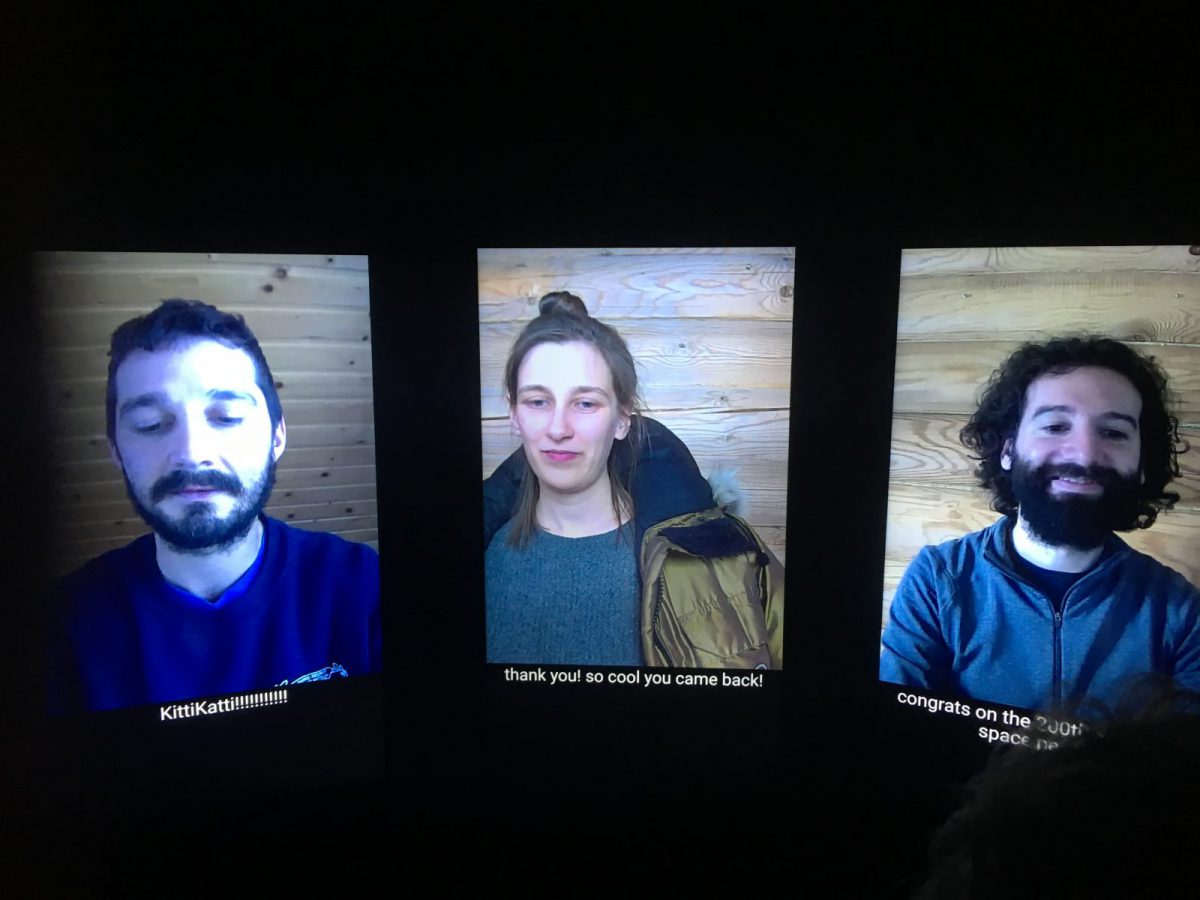 #AloneTogether by LaBeouf, Rönkkö and Turner in Kiasma, Helsinki, Finland.

Like I said in the beginning, I was expecting a really quick visit. But I stayed for an hour and would’ve happily stayed for longer, but didn’t want to keep Timo waiting (we joked how the cabin hilighted the differences between a fangirl and a movie director). Already during that time heard a few extremely personal and touching speeches by some of the girls and women in the cabin.

Someone said the cabin had helped them find human connection again, another told a story about their long-term illness and how the time with the cabin people had made her feel better, to acknowledge her own feelings better and to enjoy her time with friends even more.

A lot of emotional stuff about community and human connection was said. Sentences like “all of our core in this cabin” were written on screens. Rounds of applause were given to speakers. Some said the experience helped us transform from caterpillars into butterflies.

At this point I felt really sad that I hadn’t had the courage to attend earlier. I felt sad that I wasn’t part of such a wonderful, welcoming and supportive group — although, for that moment, I really was.

I spoke with the group and the artists a few times and all of them were just so unexpectedly friendly and genuinely interested in what I (or anyone else) had to say. All of a sudden, I didn’t feel shy or awkward at all like I usually do in front of a big bunch of strangers. It might sound corny, but honestly… during my hour of being #AloneTogether was the warmest feeling of community and human connection I’ve had in a loooong time.

When I told everyone it was my first time in Kiasma ever, they were amazed and happy that they were the ones who finally inspired me to come and that my “I will go in some day” had turned into “I’m going in today”. 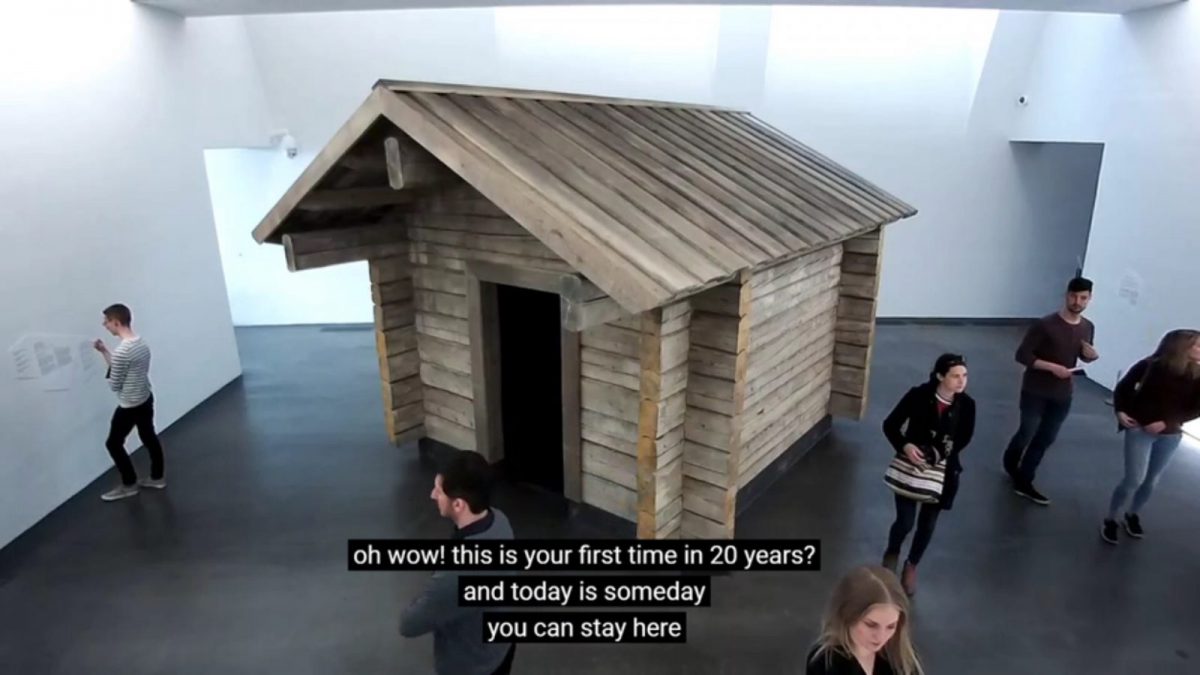 The artists’ messages appeared on live video feed online for everyone to see.

(Why is it weird that I hadn’t been before? Well, Kiasma is possibly the best known museum right in the middle of Helsinki, a city I’ve lived in for more than 20 years. And I’d never visited before. Me. An artist, a photographer, the person who burst into tears upon walking into the oval room covered with Monet’s Waterlilies paintings in Paris.)

I would’ve wanted to stay until the very end and to be there when the screens were finally turned off at the end of their month in their isolated cabins, but I worried Timo might get antsy. So I got up, thanked the trio for all their (very entertaining and sometimes very important) work, said goodbye to everyone else there and walked out. 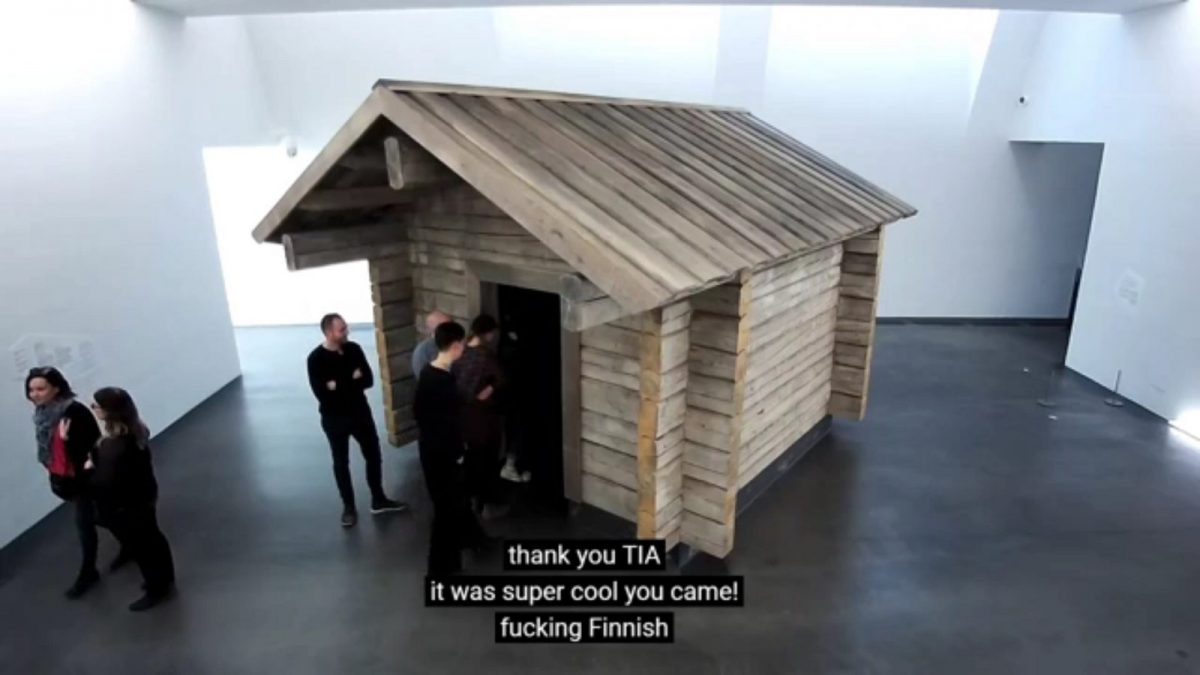 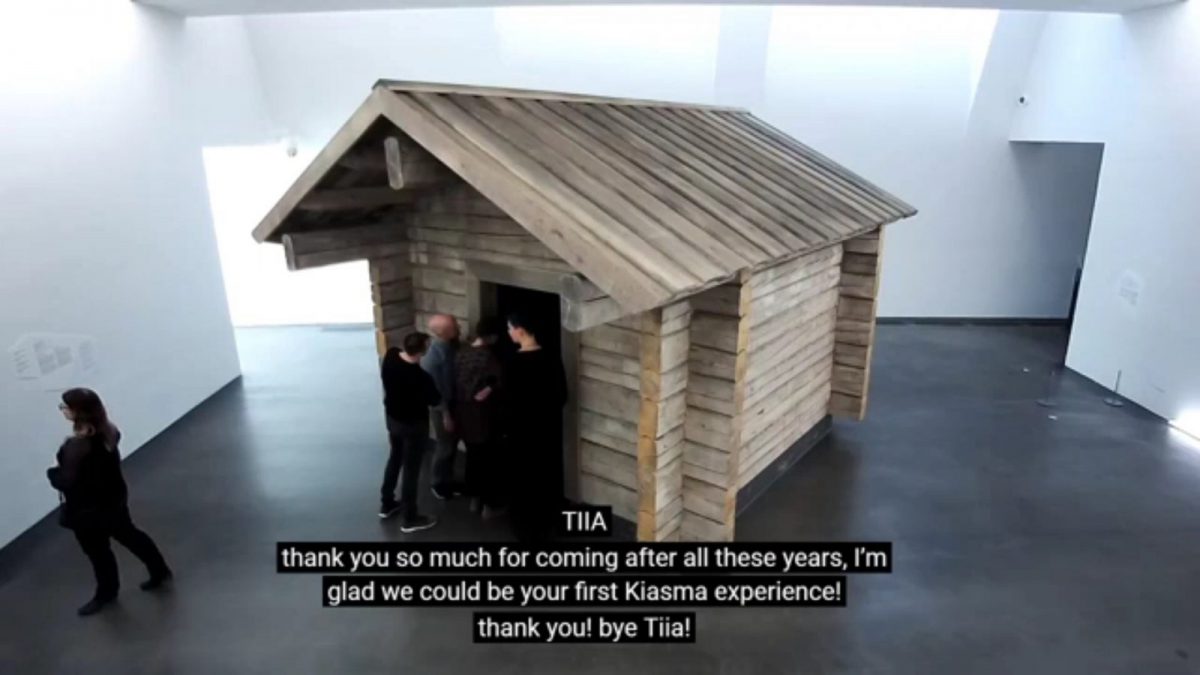 …and then gets it right!

I felt happy afterwards, and excited but weirdly calm at the same time and my cheeks were hurting from smiling for an hour. It took me a long time to really come down from the high I’d gotten due to being courageous enough to speak with a group of strangers and now, 24 hours later, I’m still thinking about it, trying to understand what it all means.

I’m not a big fan of modern art and weird installations where someone fills a room with washing machines, hospital equipment and blenders all full of human urine, menstrual blood and mother’s milk, but #AloneTogether is something that I just get. I get what it’s trying to do and how brilliantly, surprisingly well it manages to do just that: to incite a strong sense of connection, trust and support between complete strangers from different backgrounds and countries.

It’s a lovely experiment, a memorable experience and an effective reminder of the importance of connection.

A reminder that we are, indeed, all together in this thing called life.

PS: I have to do the fangirling thing… Dear Nastja, Luke and Shia. If you happen to read this, I just wanted to say how much I appreciate everything you’re doing. It might not change the whole world, but it clearly changes something. The way people see art, the way they look at life, the way they go about their ordinary days. Stay awesome. I really hope I get to shake your hands & hug the shit out of you some day :)