The X-Files Filming Locations In Vancouver

During our recent trip overseas we also did a quick stop in the beautiful islands of the United Kingdom… and this time, made it back to our lovely (other) home city, Cardiff! We stayed with Jurys inn Cardiff for a couple of nights and loved the central location. And when we say “central”, we really mean it: the hotel is located right in the middle of all the shopping and nightlife, just a minute’s walk from basically everything important in the city.

Here’s a few of our best tips on what to do and what to eat in Cardiff, plus a look into this lovely luxury hotel right in the middle of it all! 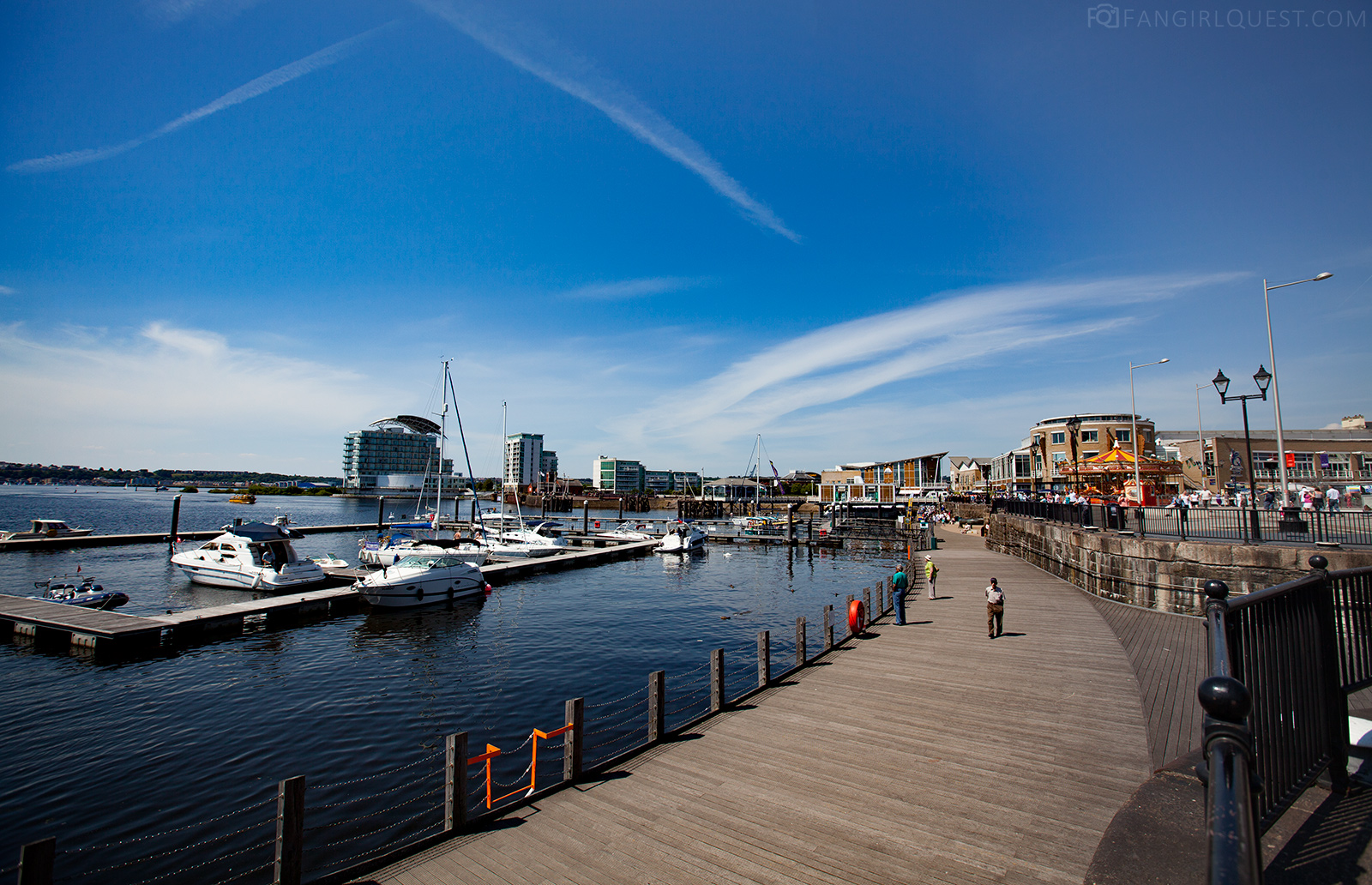 A sunny day in Cardiff Bay

Unless you’re a TV geek like ourselves, you might be looking for something else than running around trying to spot the various filming locations in Cardiff. We’ll list a few of our favorite things to do in the city below, but since we are so into filming location travel, we’ll need to get these guys out of the way first.

First of all, there’s Sherlock. Even though the show takes place in London, a big part of it is actually filmed in Cardiff, Wales. The streets of Cardiff have posed as the capital in almost every single episode and one of the fun parts of watching the show for us was always the part where we got to yell at the screen: “LOL, that’s not London, that’s Cardiff Bay!” 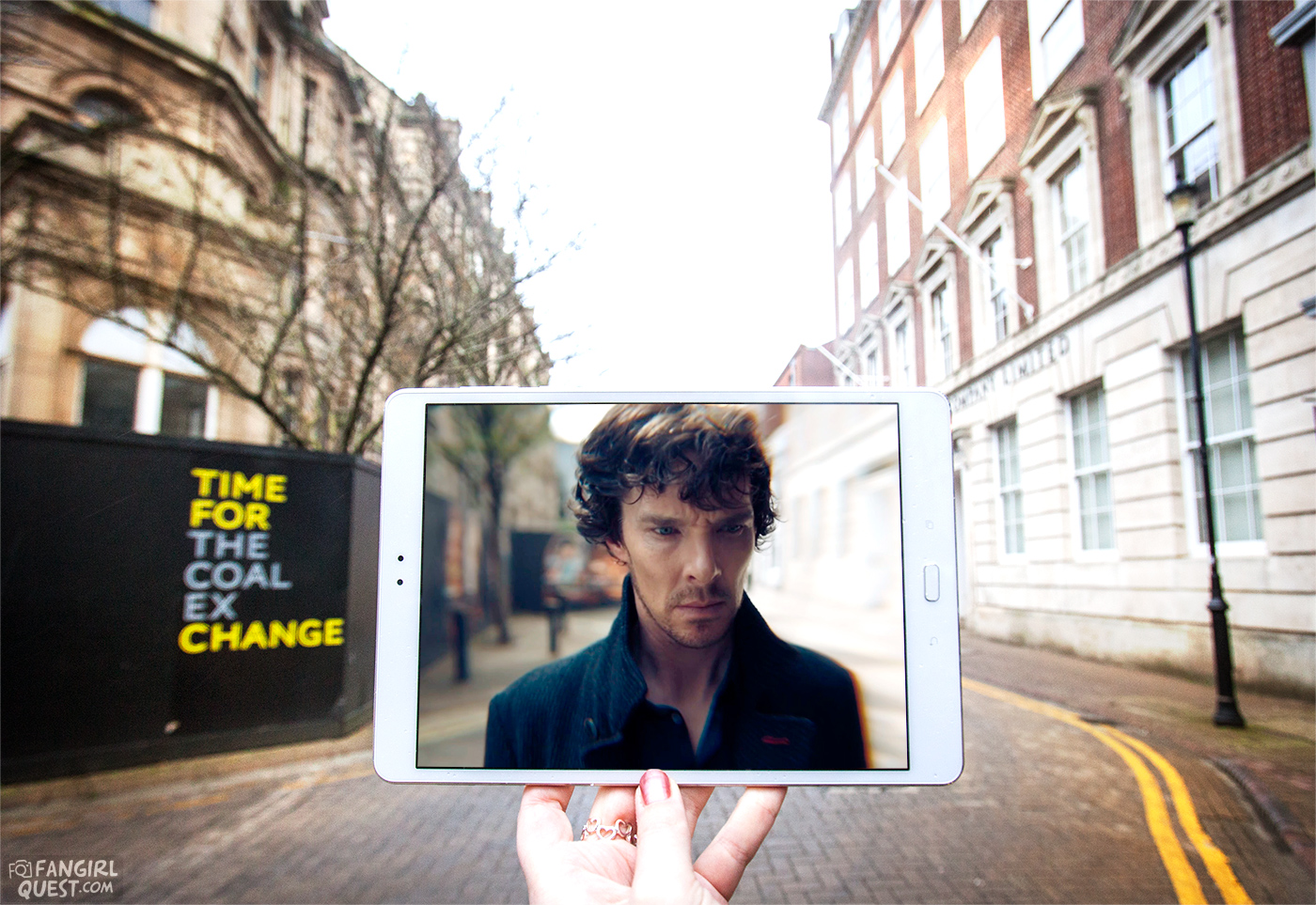 One of the fake London street, actually in Cardiff, Wales.

The other big thing that comes out of Cardiff is of course The Doctor. We were both living in the city at the time when the Doctor was just about to turn from a guy looking a lot like Matt Smith into a dude with the face of Peter Capaldi, so us, clever us, managed to meet them both in person.

The same happened with Sherlock. So, some of our fondest memories of Cardiff actually now just involve those precious minutes we spent chatting with our idols on a street corner somewhere and just thinking “gosh… they’re so nice in real life.” 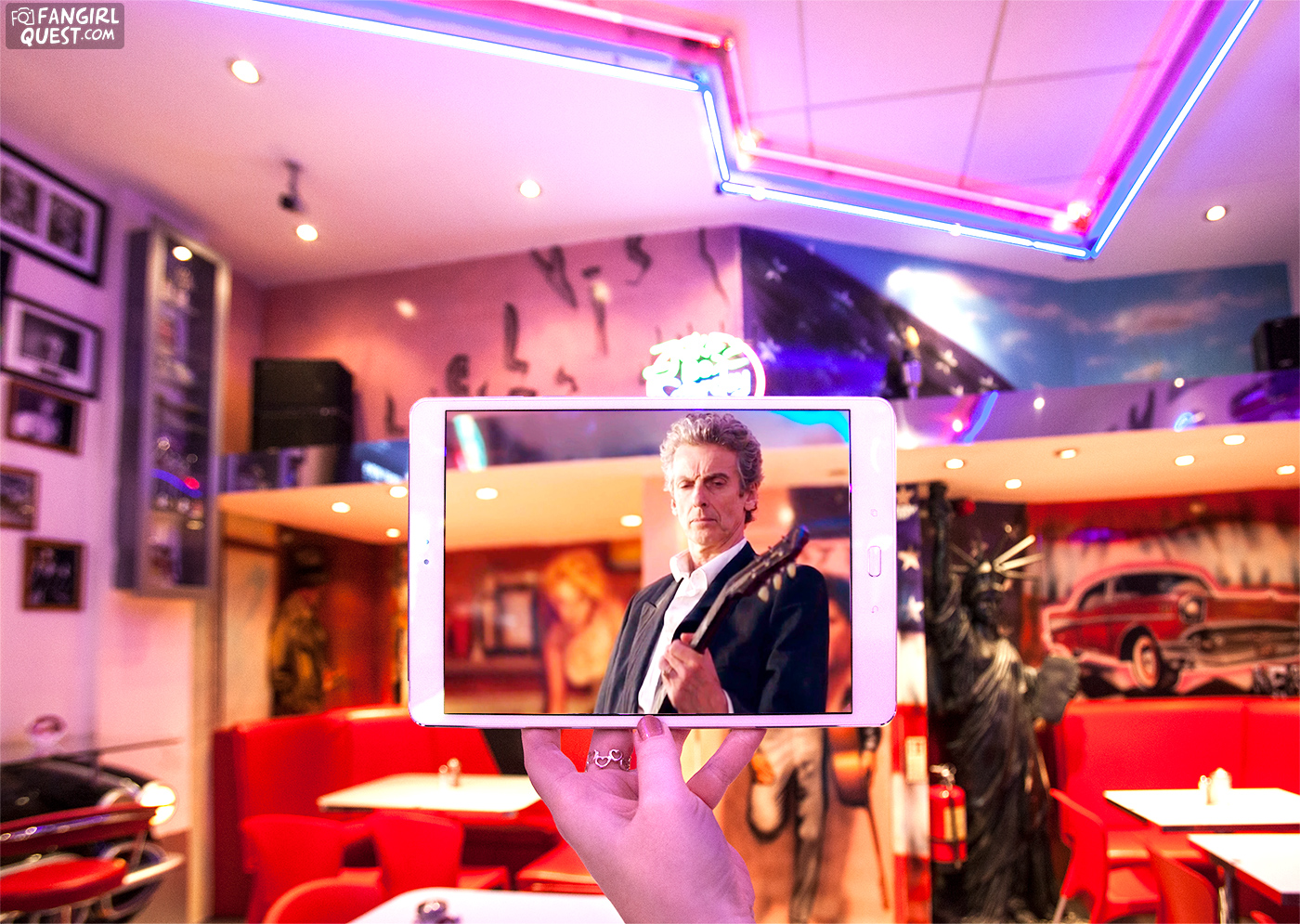 The Doctor at Eddie’s Diner in Cardiff Bay, Wales

If you’re into film tourism and want to visit some of the prime spots for Sherlock and Doctor Who, we have a very handy guide for you. Just follow this link to check out our Cardiff Filming Locaction Guide!

(Other) nice things to do in Cardiff

Honestly, there are so many nice things to do in Cardiff that we won’t even try and write a comprehensive list of it all. But basically, there’s something for everyone:

If you’re into culture, concerts and theatre, you might want to see what’s going on at the beautiful Wales Millennium Centre in the Bay. There are also a few theatres in the city, some of them just a walking distance from Jurys Inn.

For friends of museums, the National Museum Wales is also just a couple of blocks away and offers interesting exhibitions ranging from old artifacts to modern photography, and much, much more. (The museum is also a filming location for both Sherlock and Doctor Who, so yay, double win!) 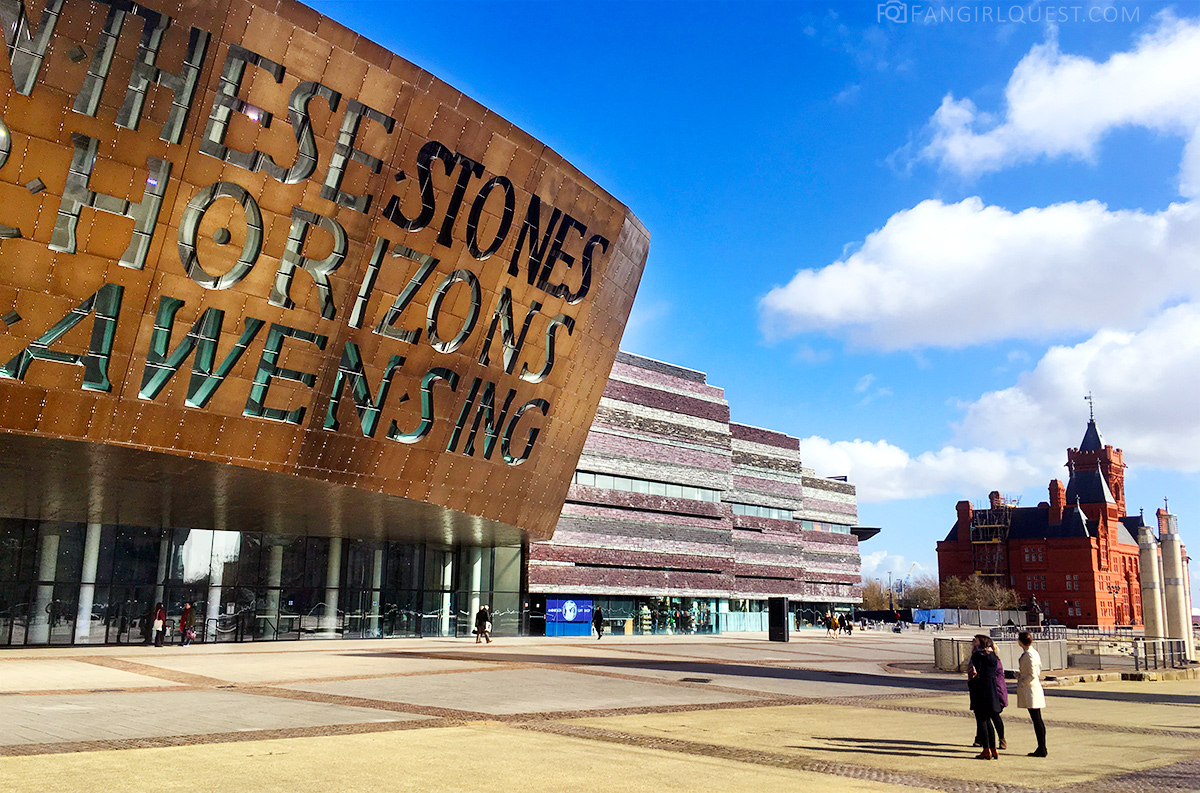 For sports fans, there are obviously the two big stadiums with important rugby and football matches taking place in Cardiff whenever ’tis the season. The big event venue called Motorpoint Arena hosts big things too in music, culture and sports. Snooker fans might catch a glimpse of Mark Selby or Ronnie O’Sullivan at the Welsh Open, alt rock people can enjoy frequent concerts from local favorites, Manic Street Preachers and Stereophonics (and many, many, many more!) and occasionally, the Cardiff Comic Con and a bunch of fabulous geeks take over the whole place with some pretty amazing celeb guests.

Cardiff Bay is great for dining and nice afternoon walks. If you end up there, do not pass the opportunity of freshly baked Welsh cakes at the little shop called Fabulous Welsh Cakes  and afternoon tea / brunch / lunch / some mouthwatering cupcakes at our absolute favorite, The Deck!

Bute Park is a massive city park right behind Cardiff Castle and has cafes and afternoon teas and sports and picnic spots and all kinds of things for those lazy summer days… and we love that park so much!

The list goes on and on. But the bottom line is: there’s a lot to do… and it’s easy to do if you’re staying at the hotel we’re about to feature next!

Let’s start with a fun story. In 2008 two travelers named Tiia and Anniina decided to take a little trip to London and Dublin. While at it, Tiia suggested they’d make a stop in Wales, because “Stereophonics are from there and I need to see where the great music and nutty accent comes from!”

And so they did. They stayed in Cardiff for one night only, but during that one night, made so many new friends that they kept traveling back to the city for several times during the following years and later, Tiia ended up moving there, bringing her friend Satu with her.

And they started a blog called Fangirl Quest while in Cardiff.

The hotel Tiia and Anniina stayed at all those years ago was called the Parc Hotel, but today… it’s known as Jurys Inn Cardiff! 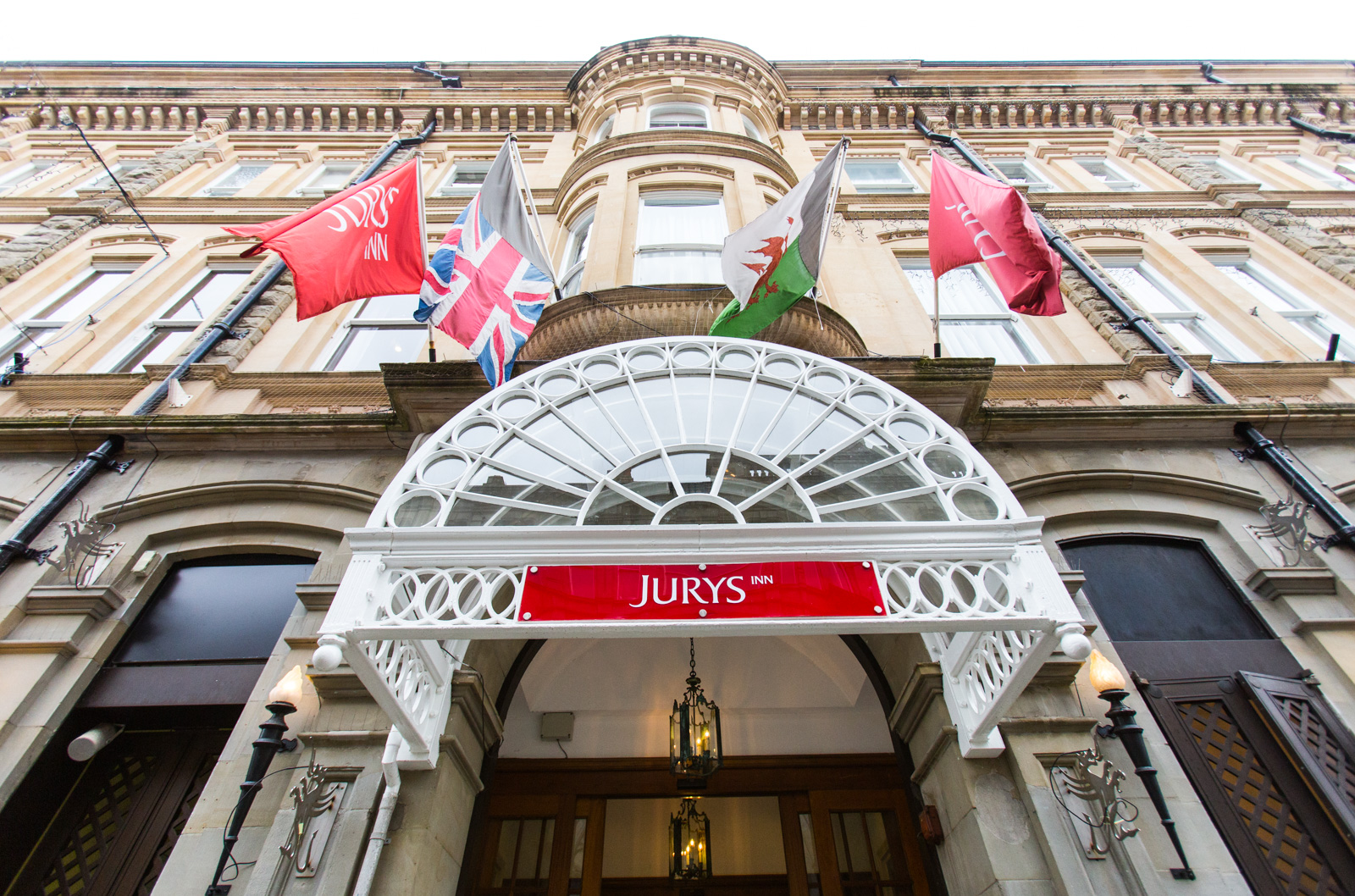 So, going back to this since-renovated hotel was soooo much fun: I remembered the fun night out, all those friends that we can still call friends today and all the fun pubs nearby that we gathered in for afternoon and late night pints during all these years. 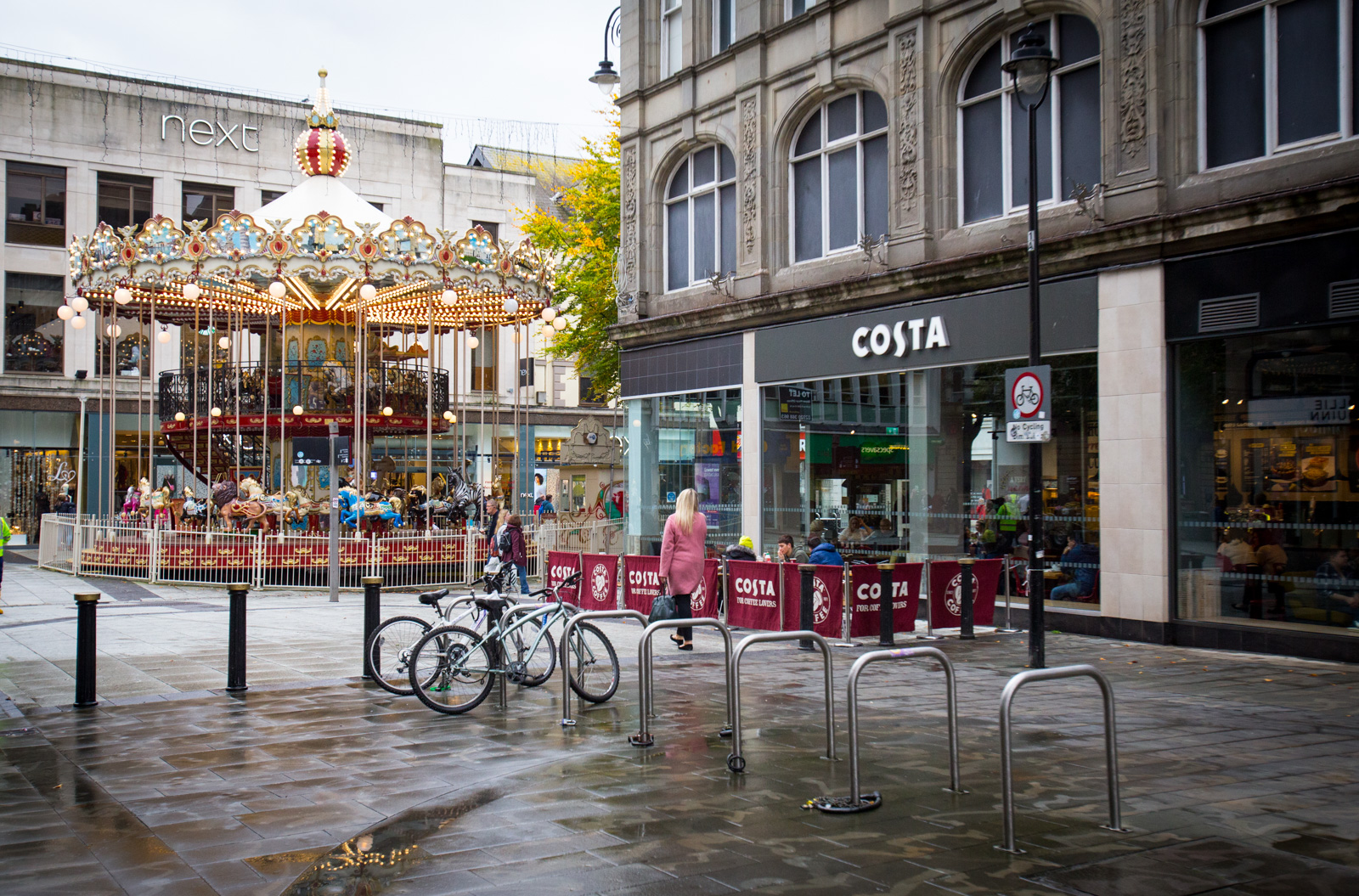 A lot in the hotel has changed since then, but the same feel of a luxury boutique hotel is there. The rooms are pretty, the lobby is like a comfortable, yet elegant living room and the staff is super friendly. 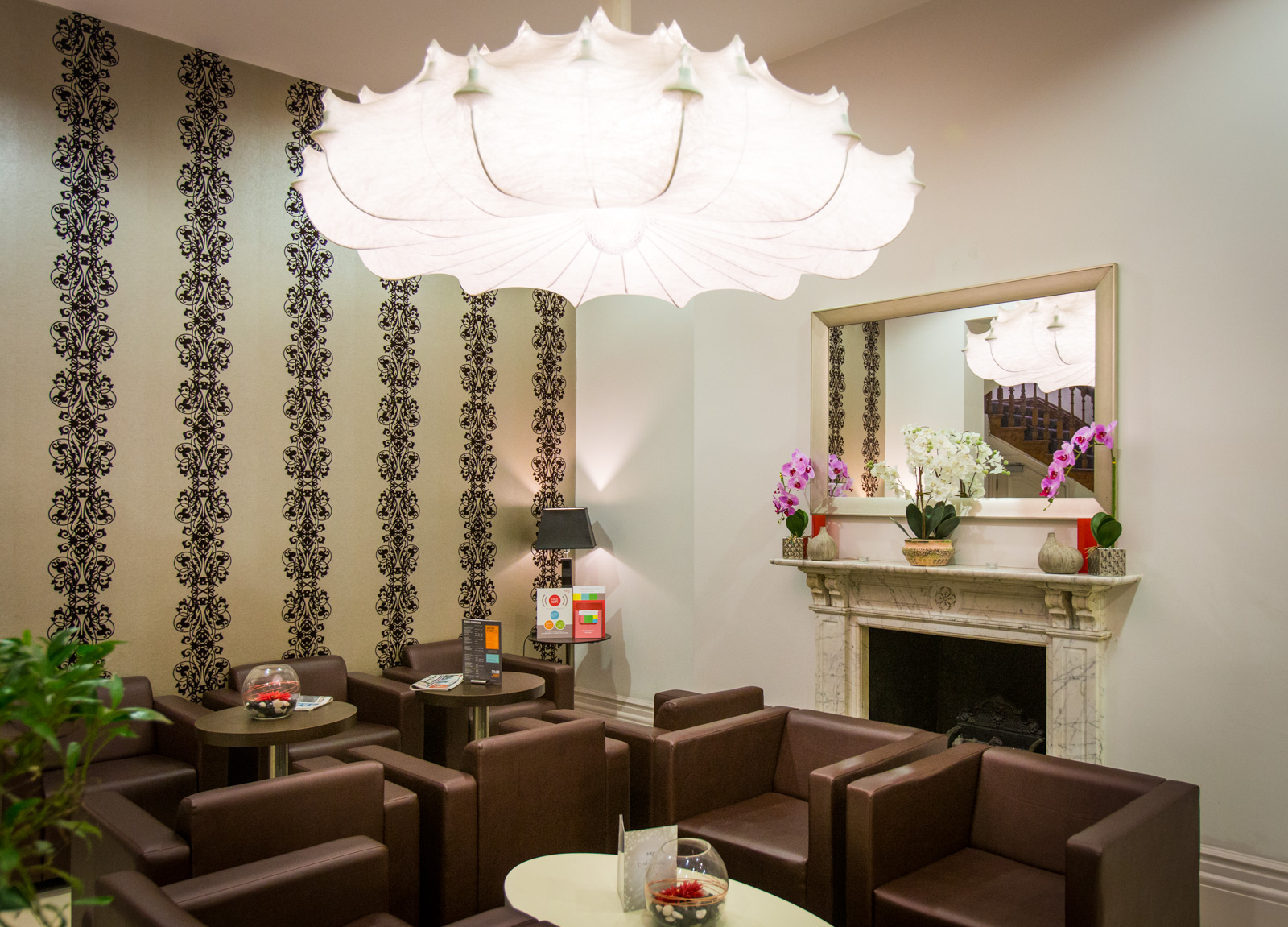 Our room had a desk, a sofa chair and lots of floor space which we always appreciate when we’re traveling with our big suitcases. We invited a couple of our local friends for a glass of cider in the evening before heading out and it was all very good fun. 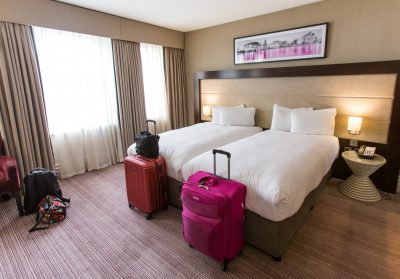 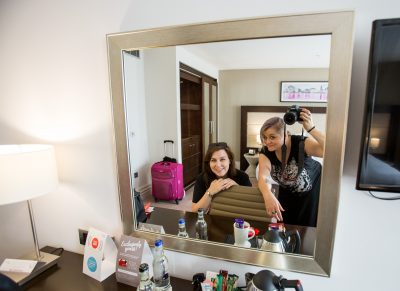 There was even some movie stuff for us to spot and photograph: maybe not a genuine Oscar statue, but a fun coincidence still. Jurys Inn were promoting their Christmas parties with some cool Hollywood props and honestly, we just wanted to grab them and run. 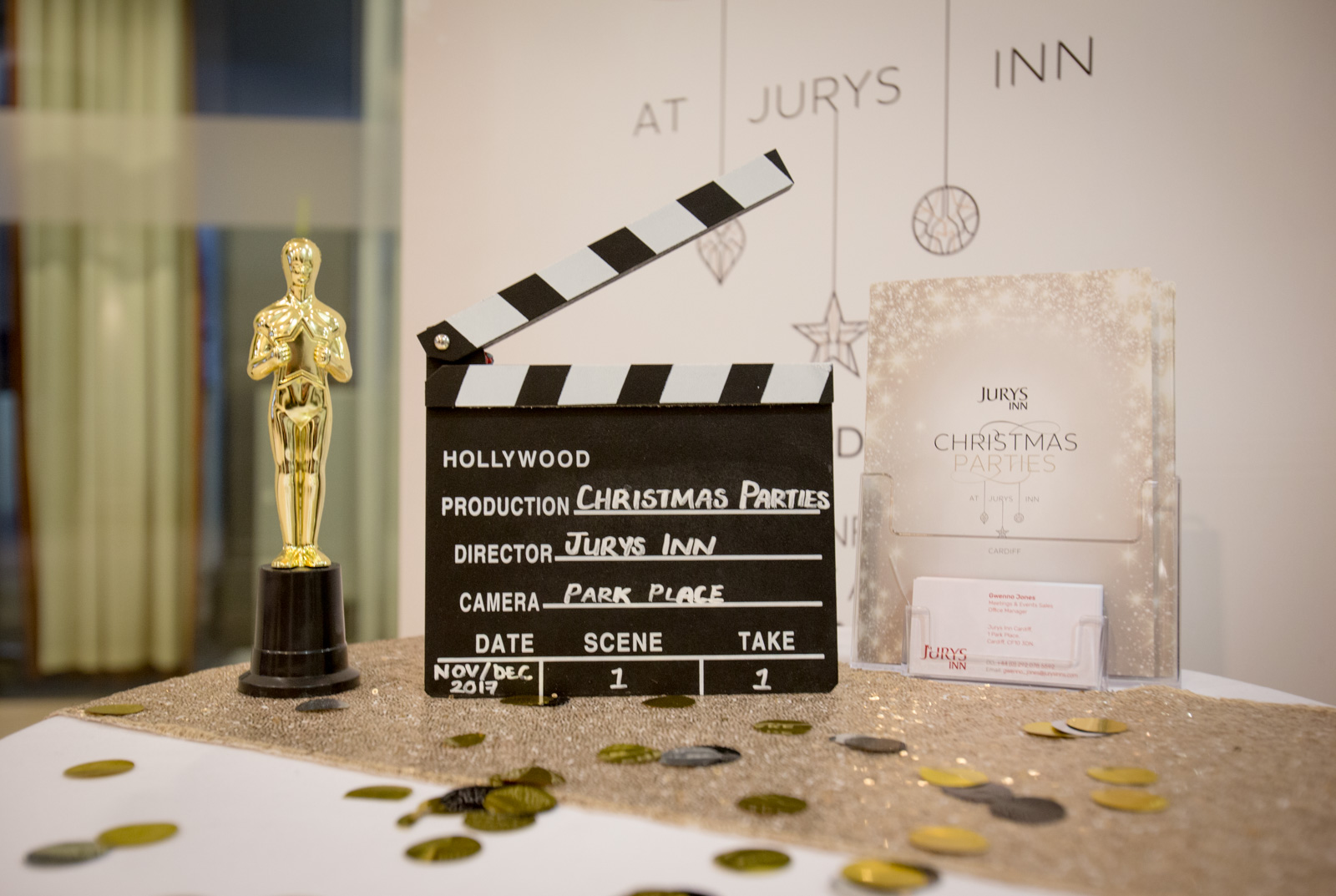 The hotel also organizes wedding parties, which we would imagine are a great success: it’s an easy spot for guests to arrive at and leave in the morning; not to mention the extremely easy access to all the hottest nightlife spots nearby. 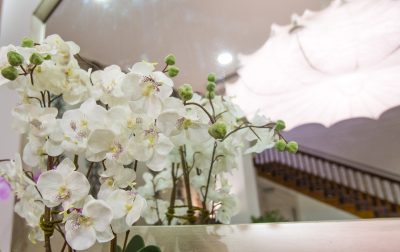 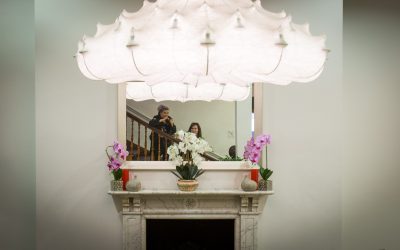 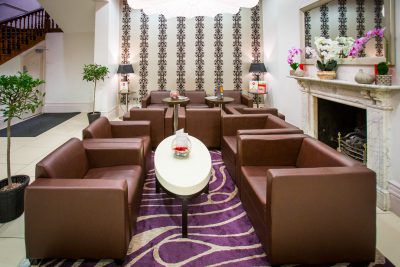 We couldn’t try out the restaurant while staying with Jurys Inn as they were in the middle of a huge renovation, but we’re hoping to come back some day soon and try out whatever new they have lined up for the brand new space downstairs. Perhaps a dinner here and a theatre night out at Cardiff’s New Theatre, located in the next block? Sounds good to us! 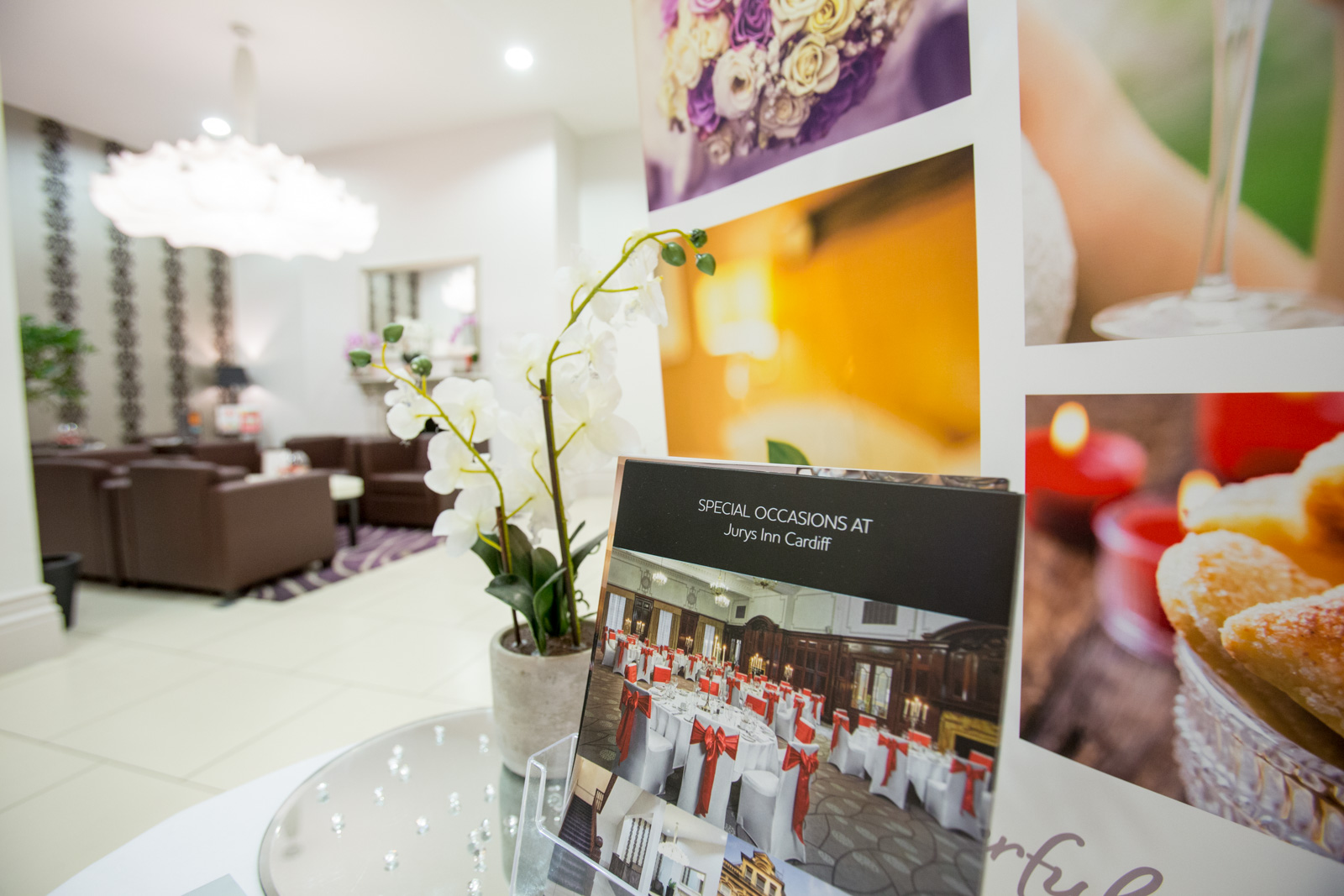 But you don’t really need to be into movies or theatre to enjoy Cardiff. Maybe you’ll just check into this hotel, spend a wild night out at the pubs and night clubs and make some lifelong friends… just like we have!

This is a collaboration post: Our stay at Jurys Inn Cardiff was complimentary for review reasons, but the content (including photos, opinions and the experience itself) are 100% our own. We keep it honest at all times. One simply can not buy our love! ⭐️