Is it ok to really, really love prison hotels? Or is that somehow creepy? I can’t decide. But I have to be honest, I really do adore them. I’ve stayed in two very nice ones so far: one in Oxford, England and recently, one right here in Finland. I spent a couple of luxurious, peaceful nights at Hotel Katajanokka, Helsinki and snapped a few photos so you can see what it’s like.

Hotel Katajanokka’s open central corridor is the best reminder of what this space used to be.

I think that — not surprisingly — my fascination to prisons comes from television shows and movies more than the eerie aspect of visiting places where people have possibly not lived their best lives. Although, I have to admit, I’m a bit of a crisis nut, which is pretty hard to explain but I’ll try: I like to think about people who have gone through tough times, be it a natural catastrophe, war, injustice or something more personal like in this case, crimes and punishments.

There’s just something endlessly interesting about the human mind and its ability to deal with hardship. And when looking at the tiny prison cells, imagining years of wasted life in one, it just makes you wonder. About all kinds of things.

But anyway! That’s probably a bit too dark to go into right now, since my stay with Hotel Katajanokka was everything but dark. However, I am going to list a bunch of favorite prison films and TV shows at the end of this post in case you need recommendations on what to watch.

Back in the day, when the building was still an actual prison that held inmates instead of happy tourists, busy businessmen and travel bloggers like me and Satu, it was called the Helsinki County Prison (in Finnish, “Helsingin lääninvankila”). It was operational from 1837 all the way to 2002, so it hasn’t actually been empty and unused for too long before the hotel folks took over. 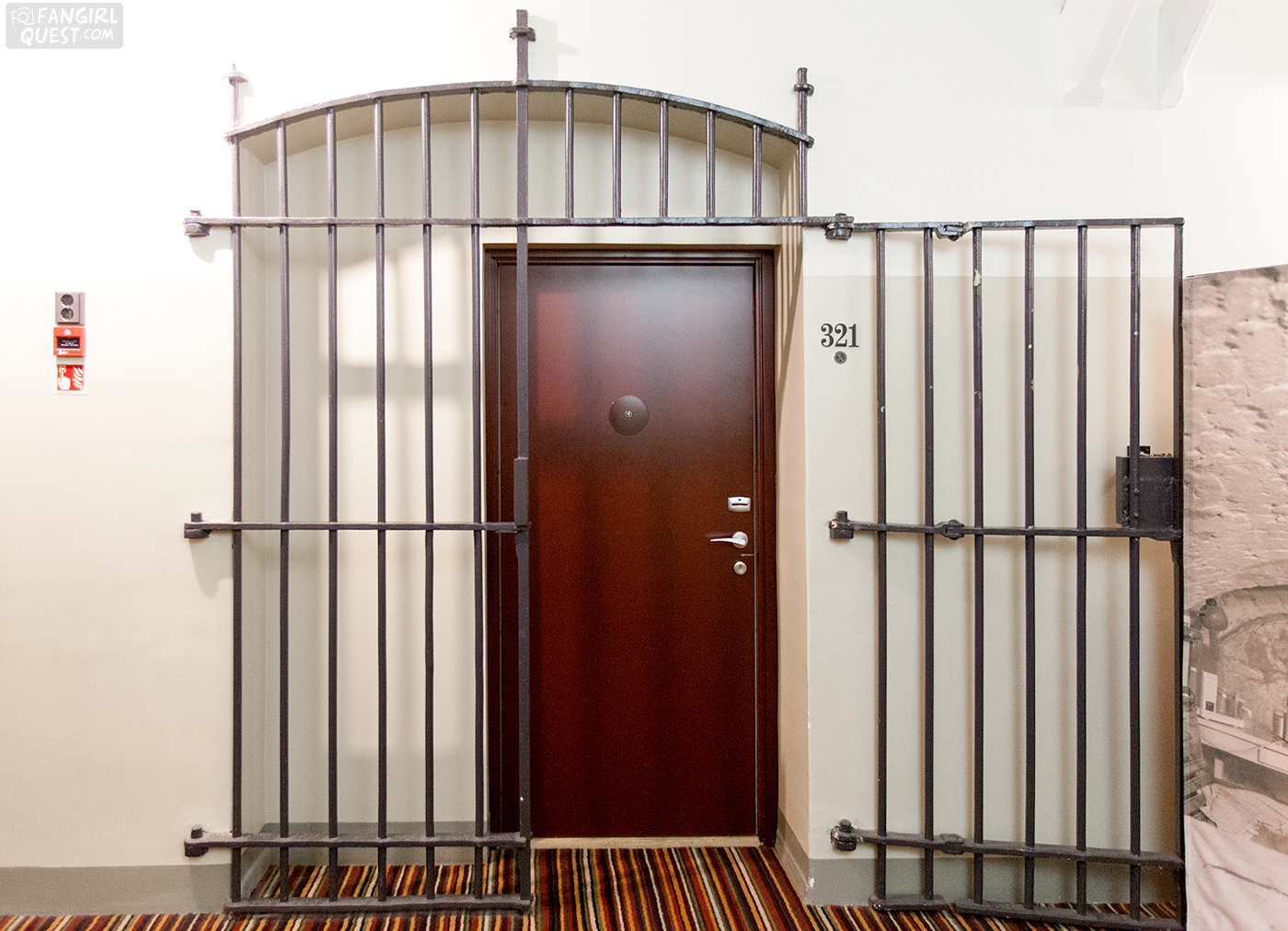 That’s one impressive entrance to a hotel room!

Before that, the building has gone through some dramatic events. During the World War II in February 1944, it was hit by an air strike, killing a guard. Apparently, it also caught fire at that time and during all the hassle, five prisoners broke their way into freedom.

The prison has had some pretty notable people inside of its walls, too.

At the end of the war, some well known convicts from the War-responsibility trials in Finland were kept here, including President Risto Ryti, Prime Minister Väinö Tanner. Another inmate of note was Martta Koskinen, a seamstress and communist spy convicted of high treason, and executed by a firing squad on September 29, 1943. She was the last woman executed in Finland. (Source: Wikipedia) 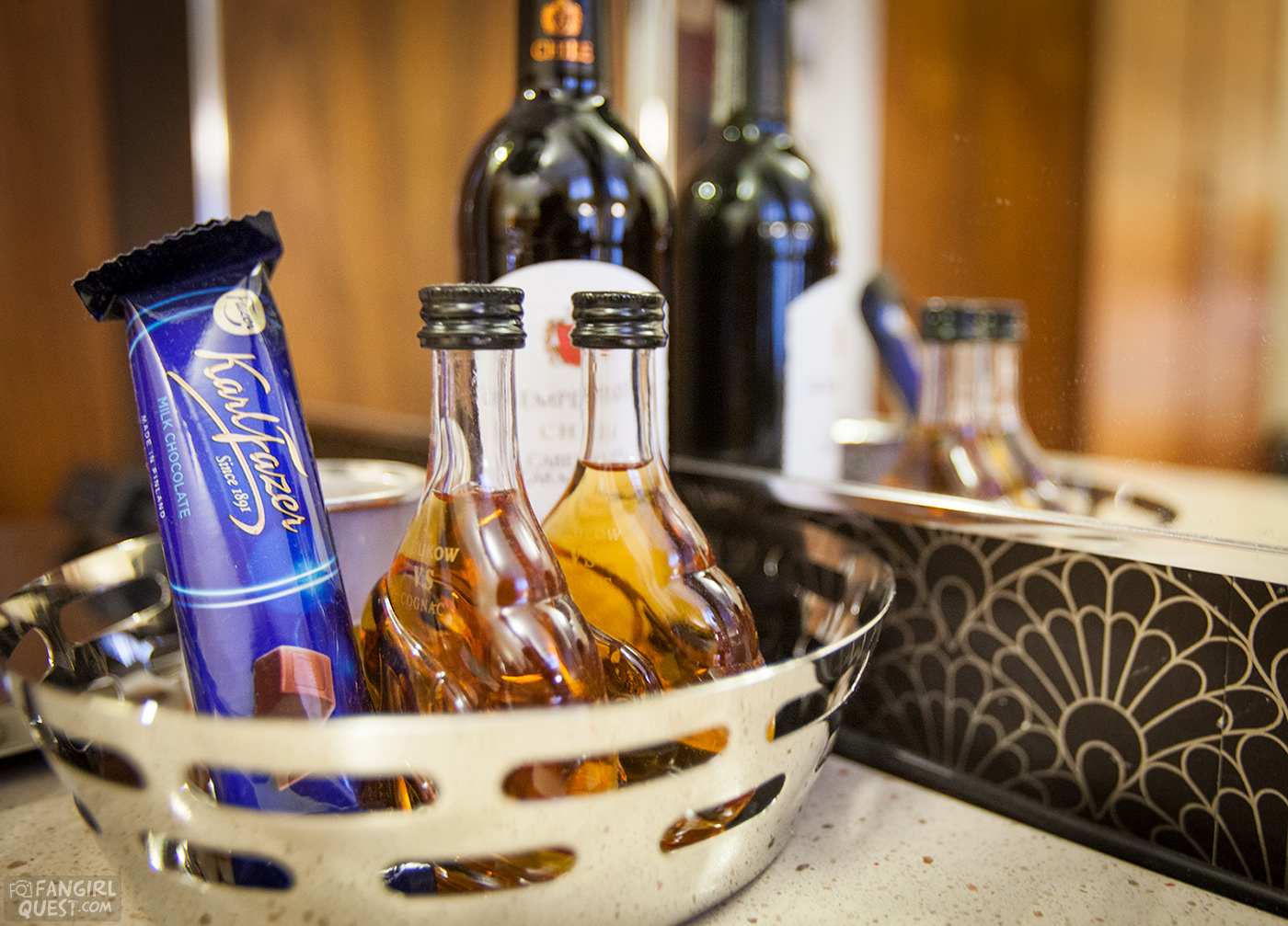 These days, one doesn’t feel like a prisoner when checking in. After extensive renovation work, Hotel Katajanokka was finally opened in 2007 and even after 10 years, I still remember the headlines it made back in the day. I really wanted to visit back then, but for some reason, it took me a decade to actually walk in through the doors!

Apart from its history and just the right amount of luxury, my favorite thing about the hotel was the peace and quiet. The thick walls certainly help with acoustics and the feeling of privacy and safety, so I got a lot of writing done in just a few hours of free time that I had during my stay in Helsinki! Loooooved it.

Working from hotel rooms? The best. All the piece and quiet!

Drinks and giggles with the director

I’ve been friends with the Iron Sky director Timo Vuorensola for almost two decades now (gosh, we’re old…). He’s one of the best & most entertaining people I know, so I invited him over to check out the hotel and to enjoy a drink or two. Turned out he was familiar with Hotel Katajanokka already, having had one of his actors, Udo Kier, stay there during filming. 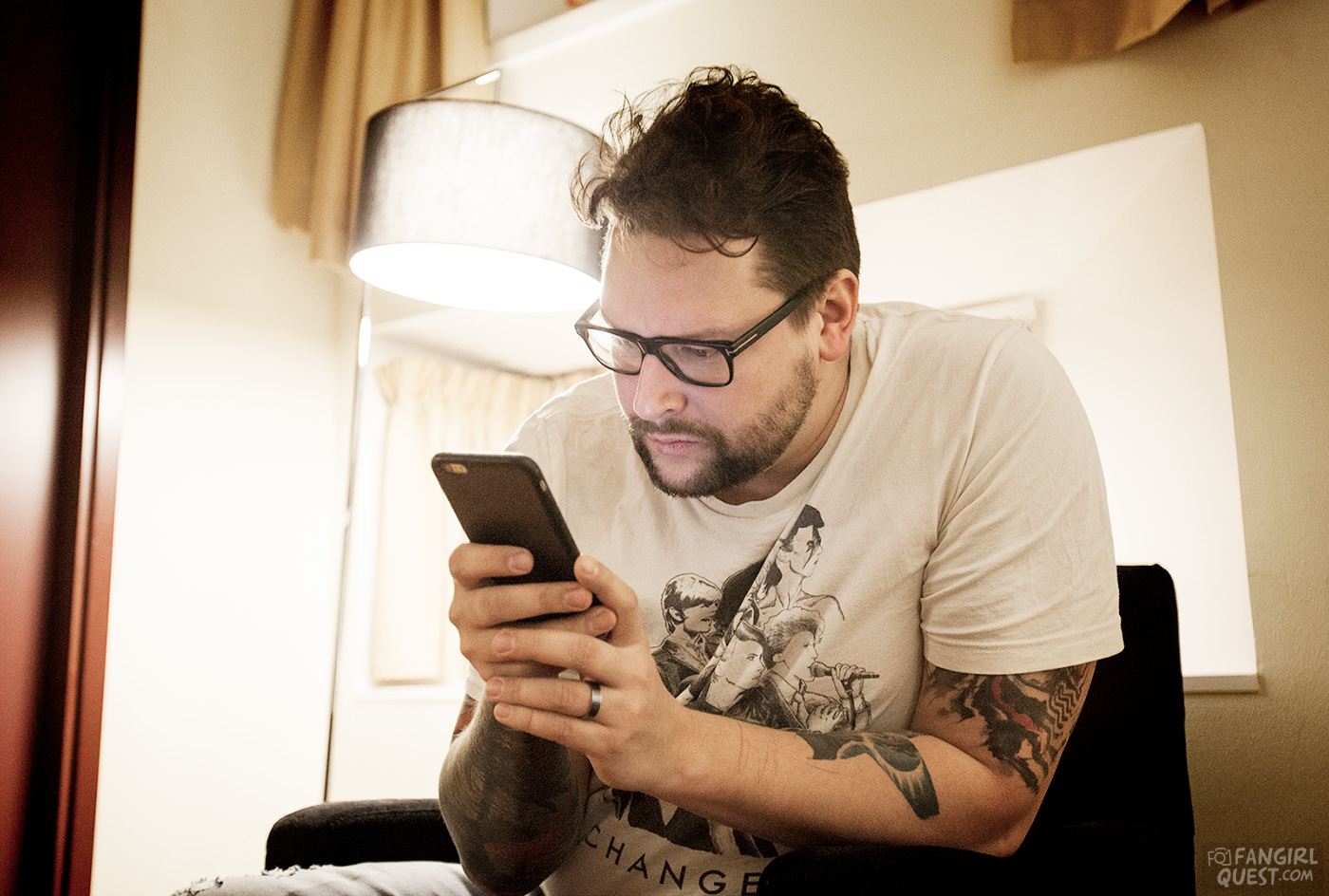 We had a really fun night chatting about the latest and listening to some of our favorite bands. We even solved a great, mind-boggling mystery of two bottles of booze. I was checking the insides of the minibar, when I noticed something that didn’t seem quite right: the bigger bottle of Finnish Koskenkorva claimed to have 4cl of substance in it, while the smaller bottle of Smirnoff said 5cl.

Well, you see, that just didn’t make any sense. We needed to know who was lying!

In the end, our investigation turned into a hilarious series of Facebook posts and videos, and we actually got our answer by pouring them into glasses. The numbers match! We figured the reason to this had to be the material: the Koskenkorva glass bottle is actually much thicker than the plastic bottle of Smirnoff, and therefore, holds less booze.

Which bottle is lying?

(Aren’t you glad we got that sorted?)

A quick tour of Hotel Katajanokka and the old prison parts

The following day we had some plans with Satu and met up to film a few video clips. We also did a little tour in the hotel. They’ve kept some of the old spaces as they were, which included the tiny isolation cell below and an old group cell with a rock cold floor and a very low ceiling. 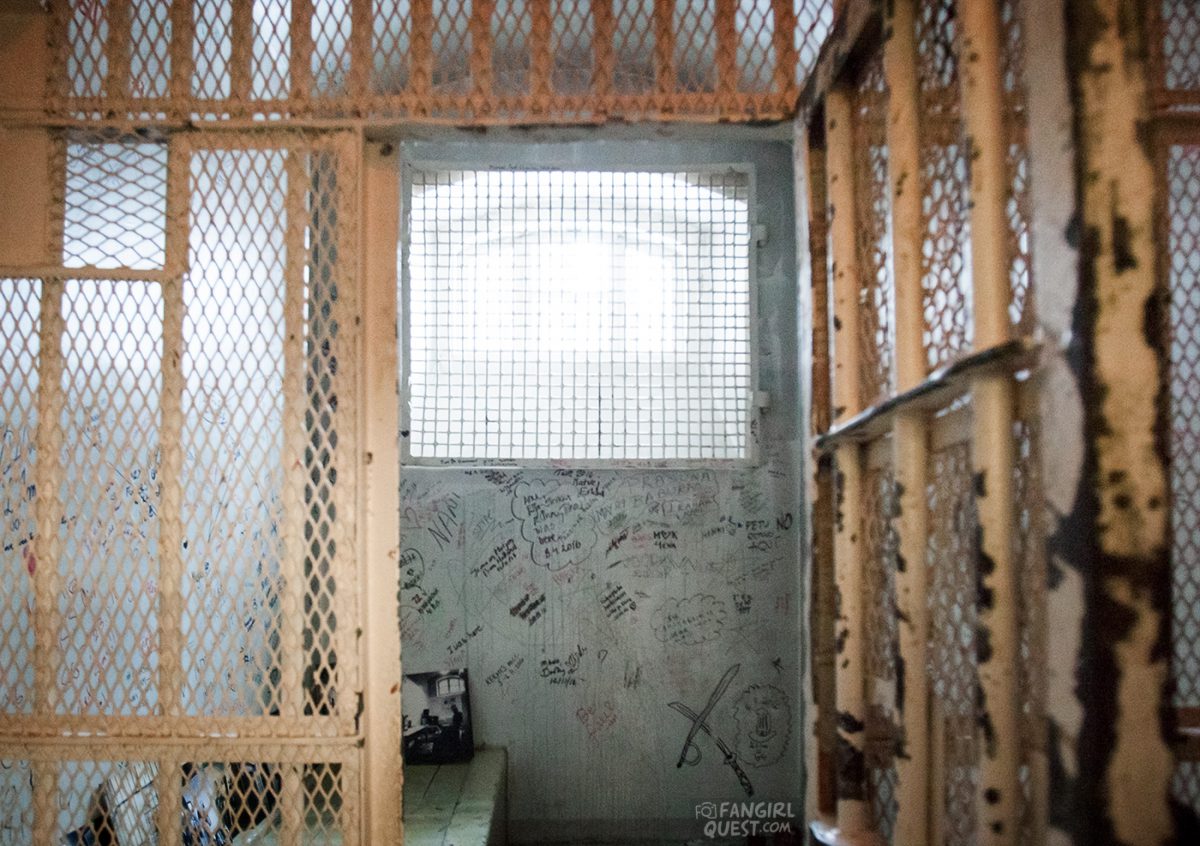 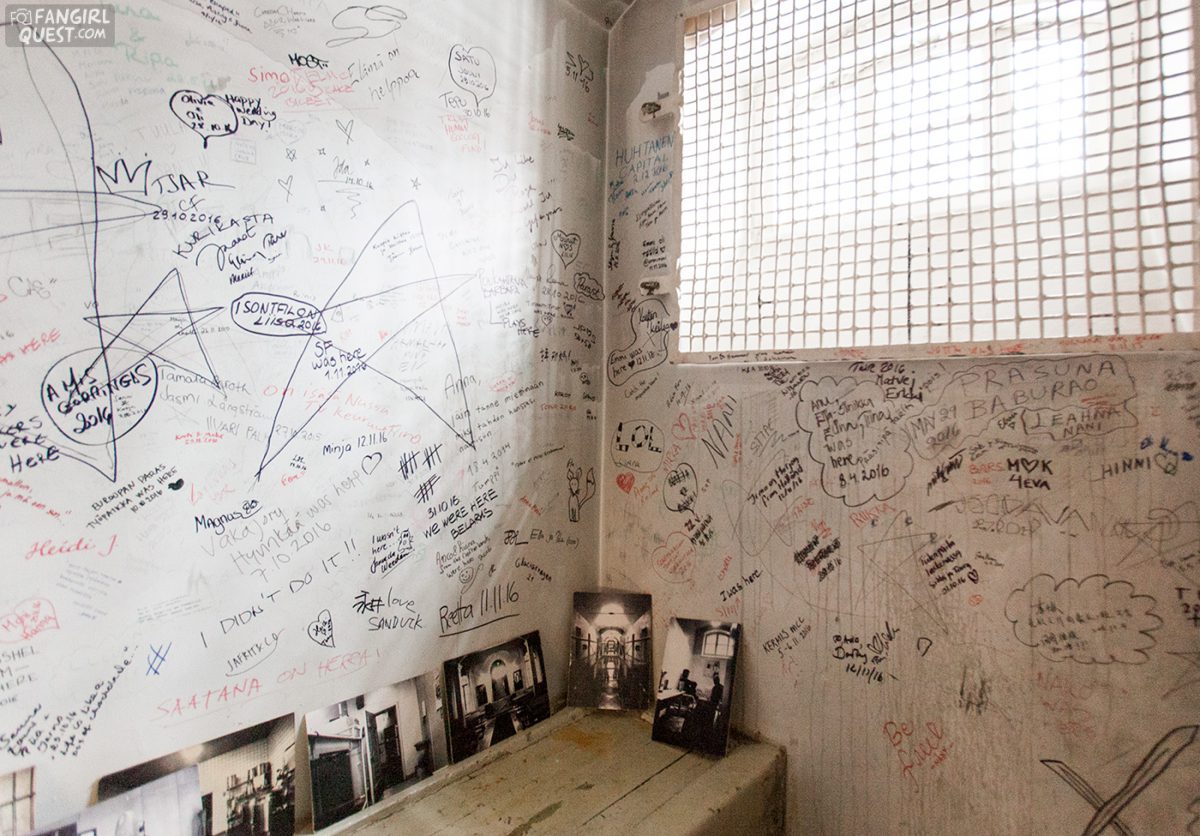 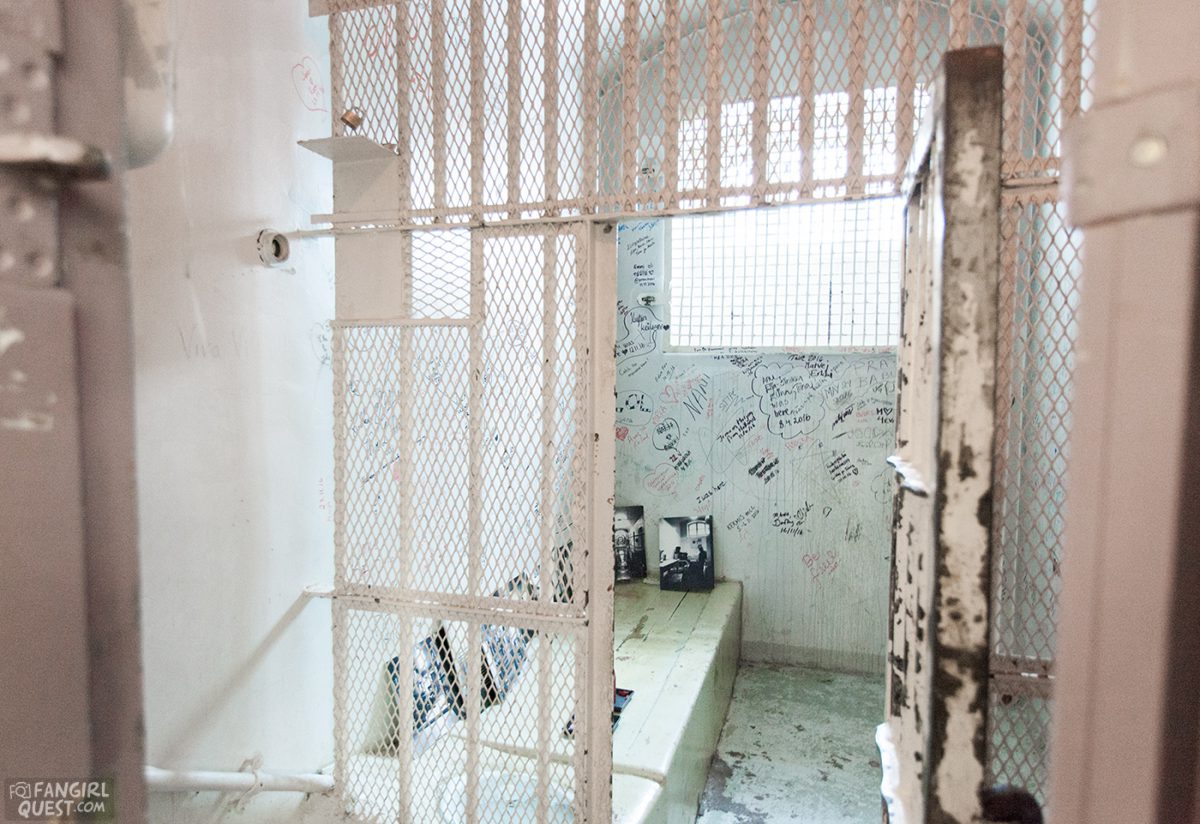 What is really interesting is that the open central corridor, the red brick outer walls and the high perimeter wall around the park are protected by the National Board of Antiquities. This means that the hotel isn’t allowed to lock the doorways to the corridor as it’s a historical space — sort of like a museum. So basically, anyone is welcome to visit and admire the hallway as long as they respect the privacy of the hotel guests.

For photography and such I’d probably contact the hotel in advance, though, and get a proper permit just to be sure. 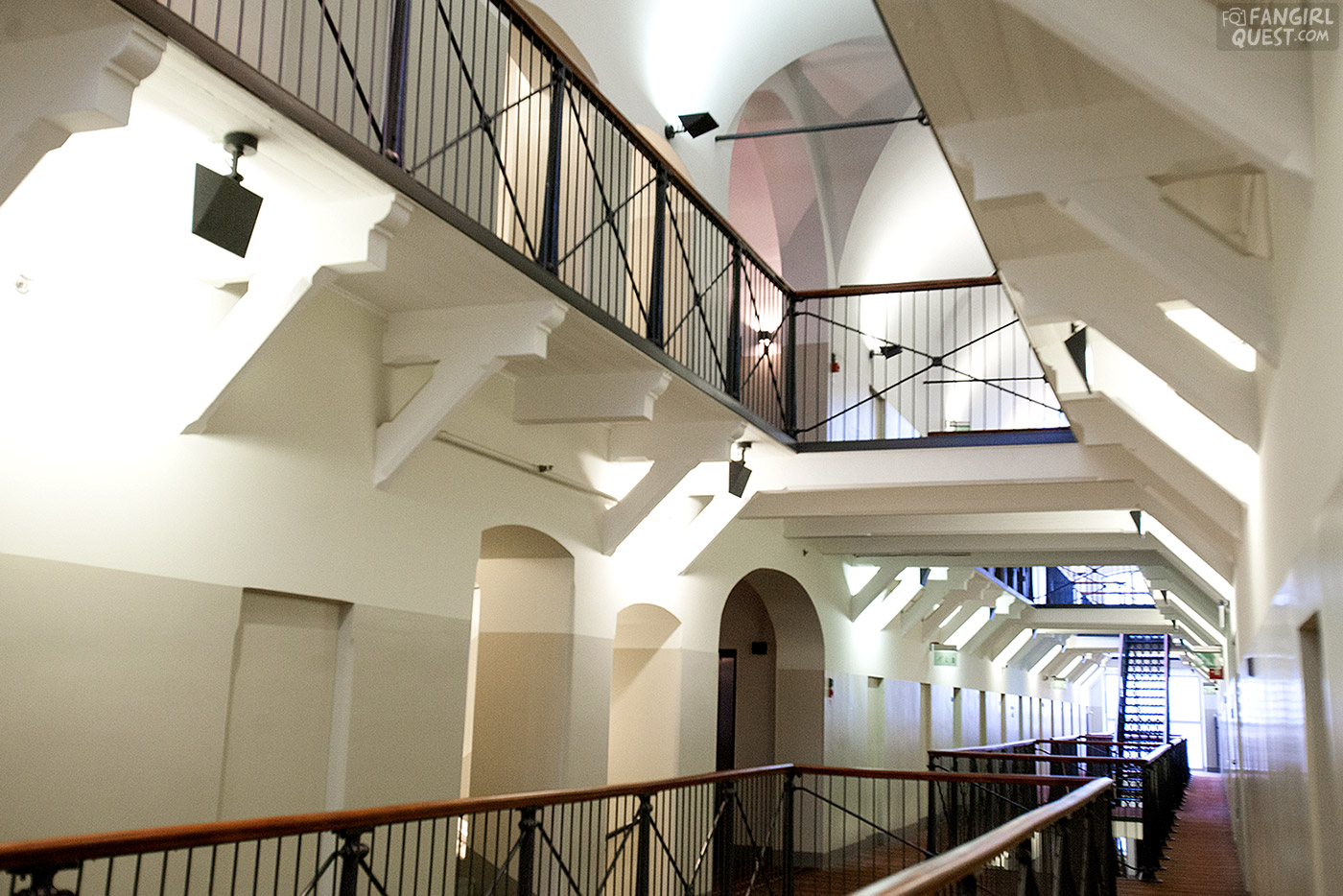 The view from our room door.

This year, Hotel Katajanokka is going through some renovation work, but it shouldn’t bother the guests too much. 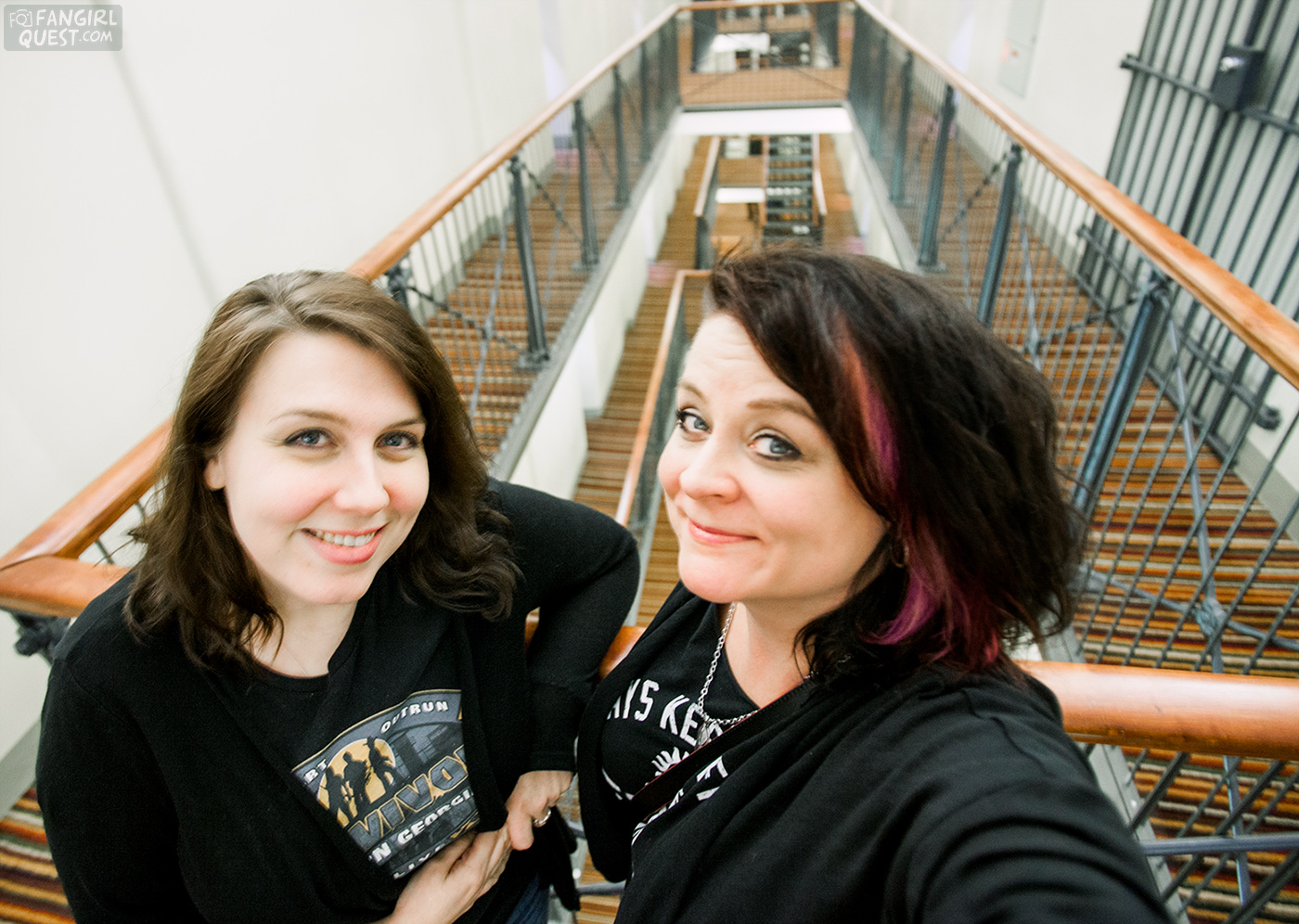 More than once, someone has mistaken me and Satu as a couple. We don’t mind and it doesn’t matter, but it makes us laugh sometimes how we’re not really helping with the confusion. A super romantic dinner in the hotel restaurant, Linnankellari, was certainly one of those times. We even joked about it to a friend; “Can you guys meet me?” “Nu-uh, we’re having a date night.” 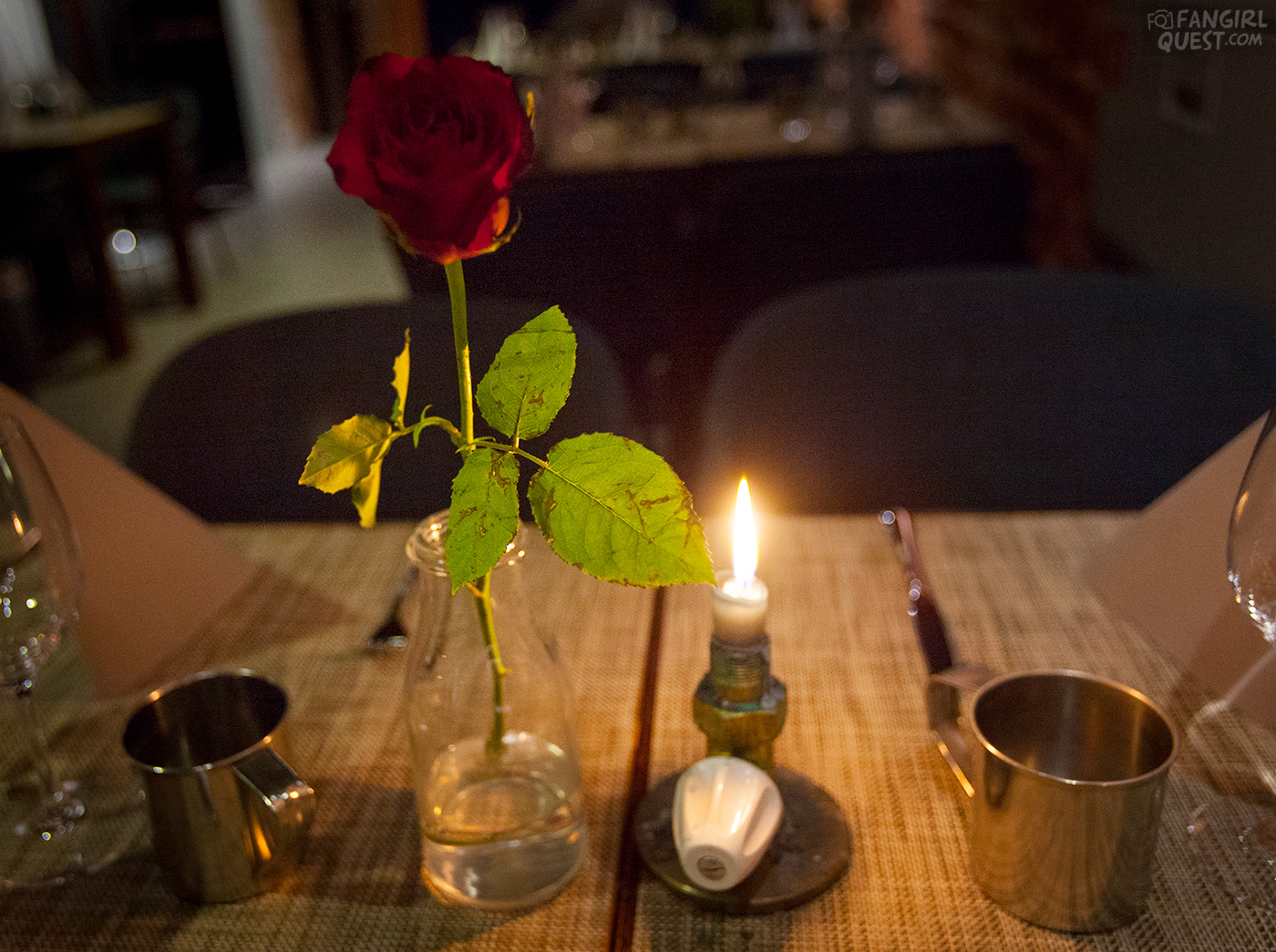 After filming some YouTube material downtown (we’re really trying to find time to get our channel properly going!) and checking out Helsinki LUX (a light installation show on the city street), we headed back to Hotel Katajanokka’s cellar restaurant for some grub. And some fancy grub it turned out to be!

I’m not a fan of liquorice, but I decided to be extra brave and taste the artichoke soup with a hint of the black stuff in the bottom. No regrets there! I practically licked the plate clean. For mains, we both got Jail Burgers… and they turned out to be some of the juiciest burgers we’ve ever had! Just melt-in-your-mouth good. I’m actually getting hungry just writing this and thinking about the flavors.

At this point we were very, very full already. But you know what they say: there’s always room for some dessert. We both picked the dessert with  sea buckthorn berry pudding, warm chocolate cake and milk chocolate mousse because wow. That is one wonderful combination. 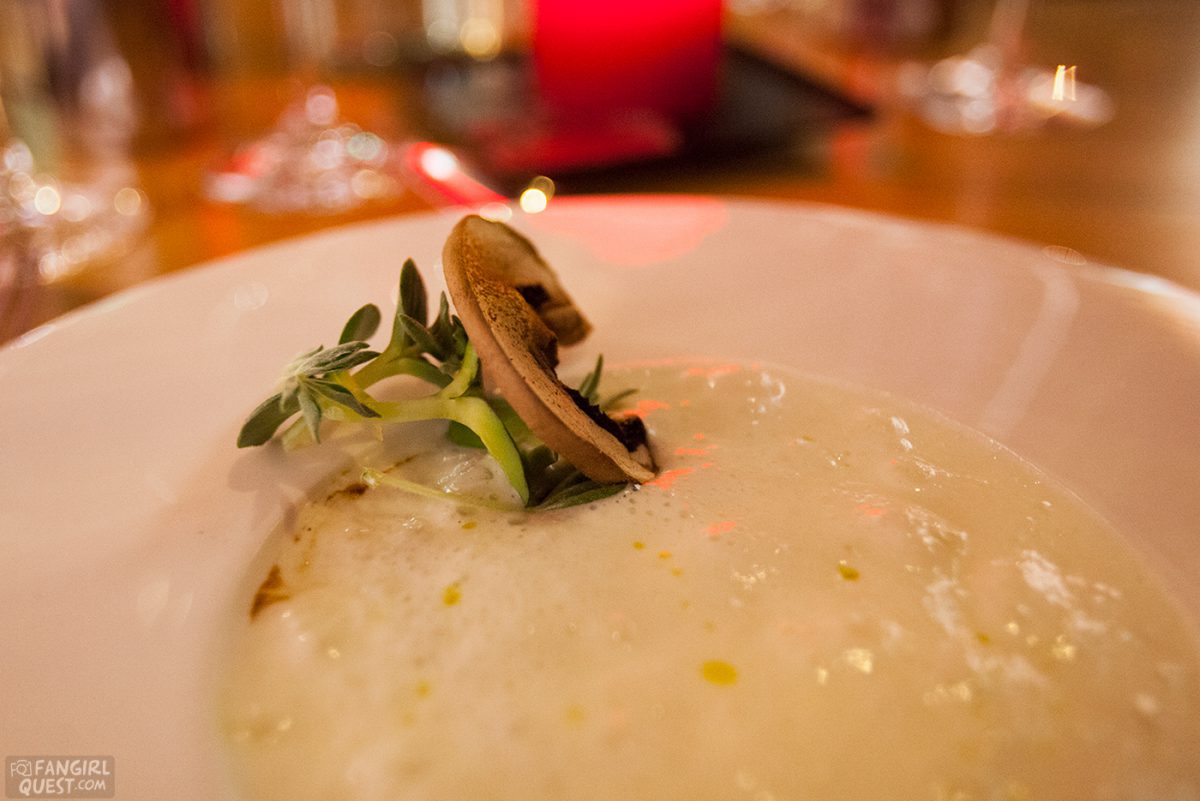 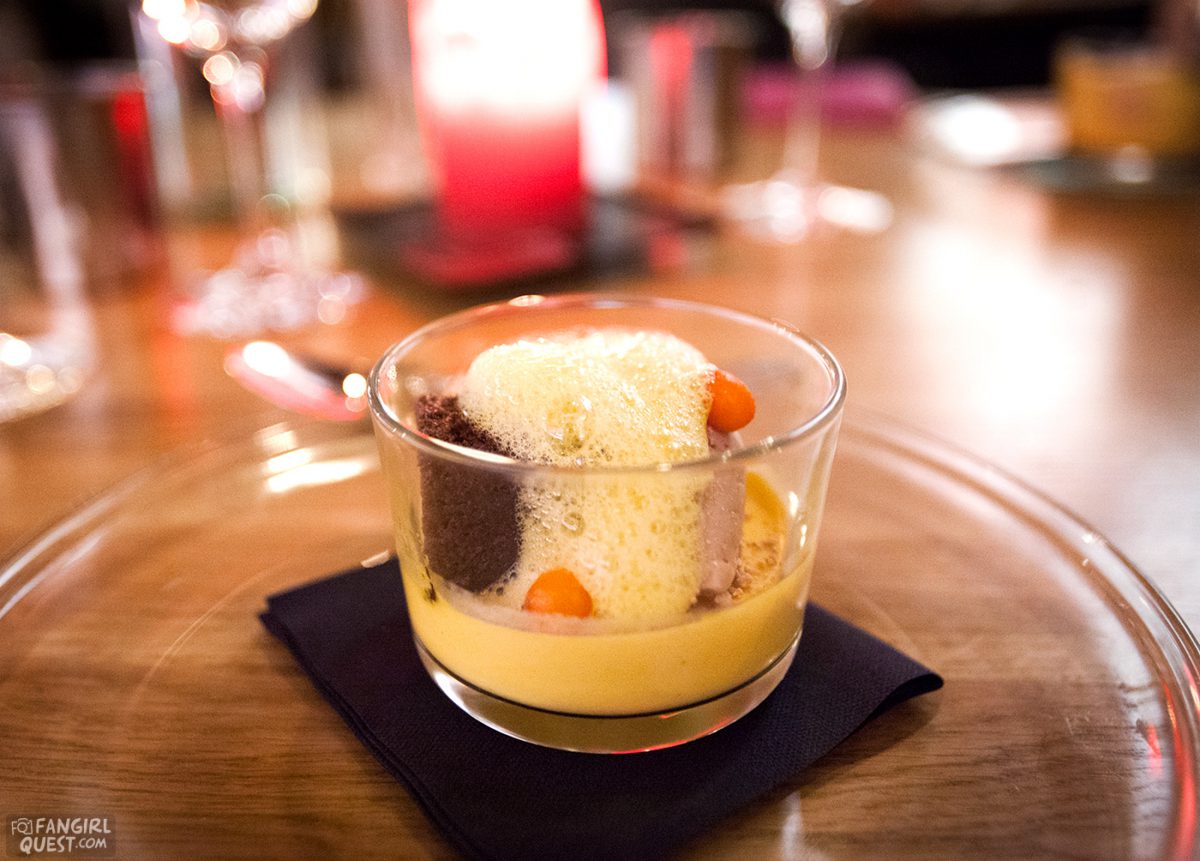 (I really, really want some burgers and chocolate mousse right now. Wondering if they could send me some as delivery.) 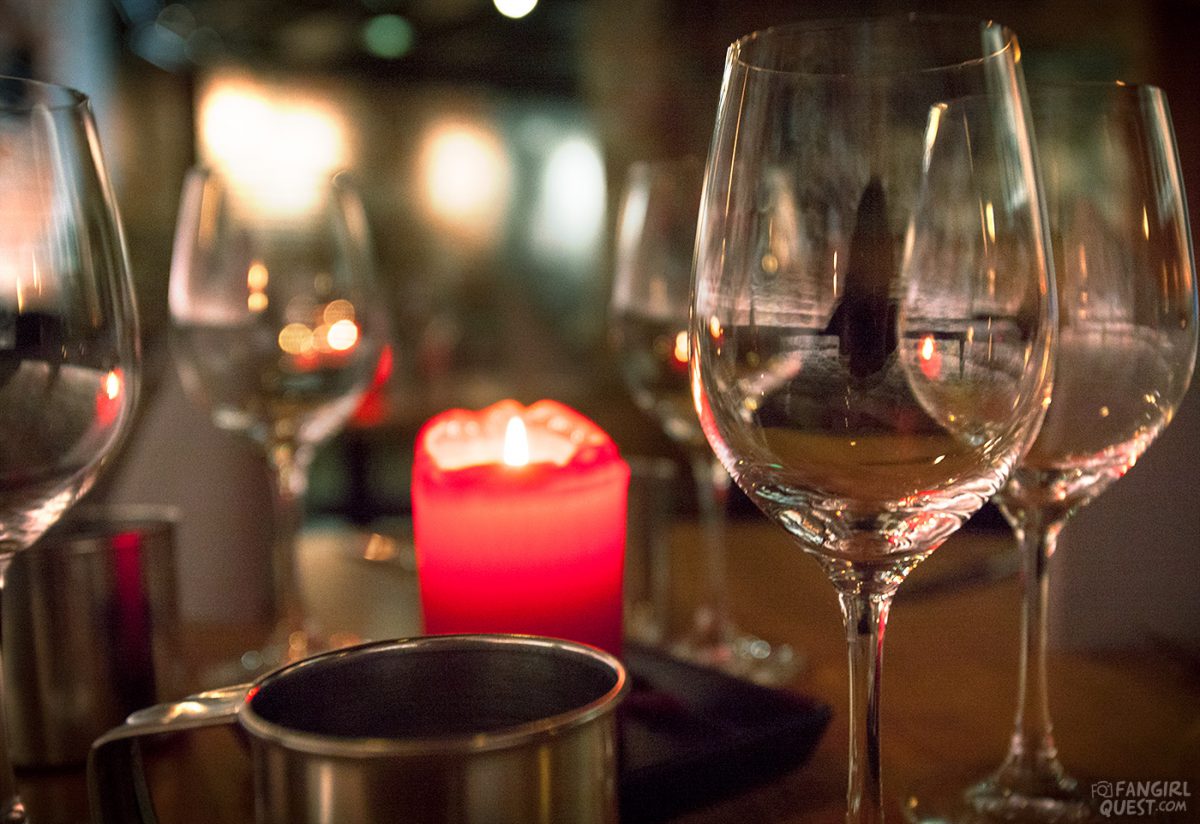 A jail style tin cup. Loving the attention to detail! 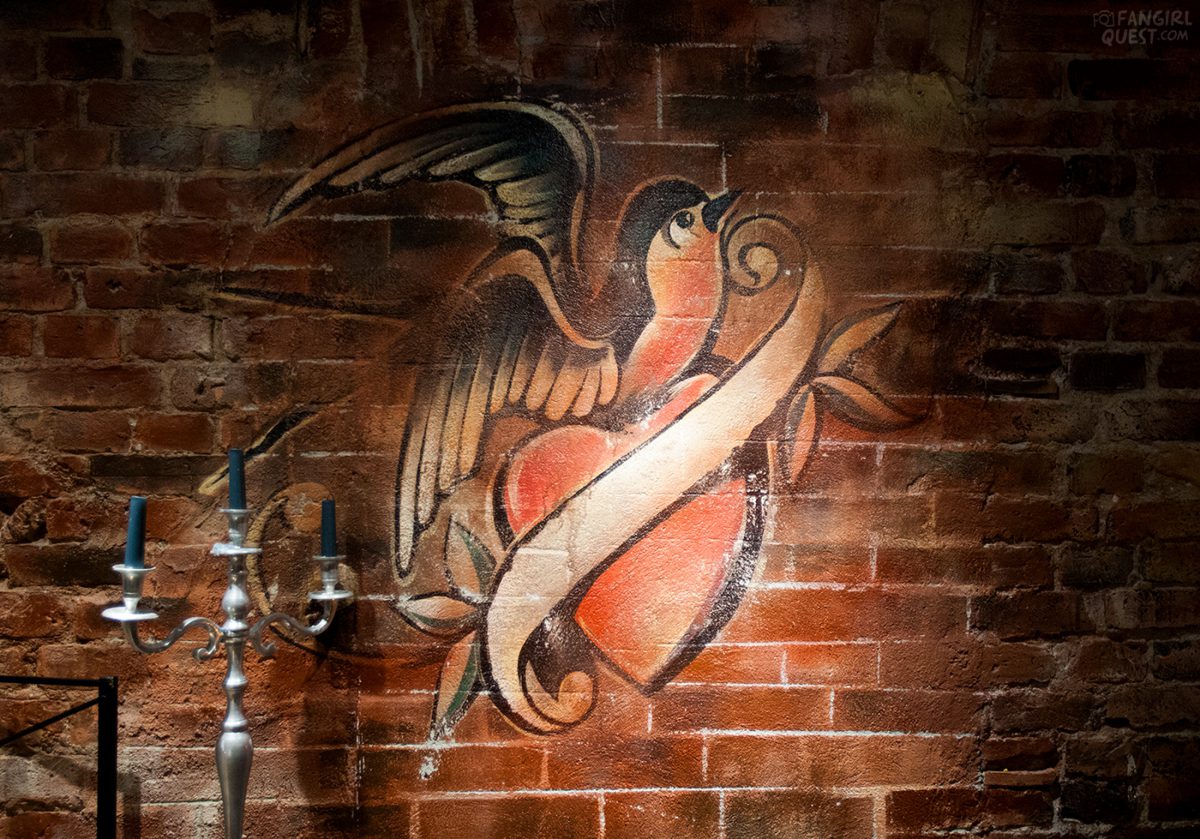 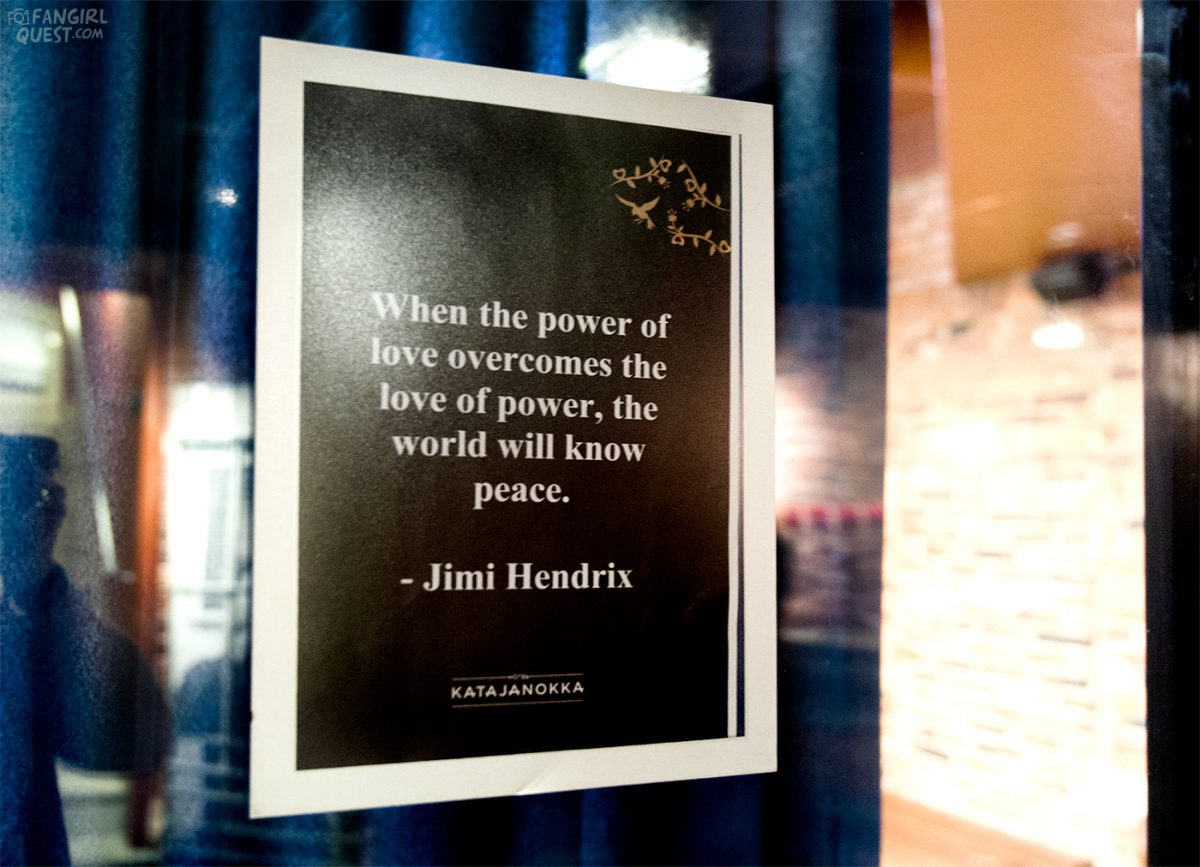 After dinner, we were both so tired from the day’s filming and well, especially the food, that we decided to just take it easy for the night. Satu went back home and left me in my room to enjoy a loooong, hot bubble bath. That seems to be my favorite thing to do in hotels these days.. 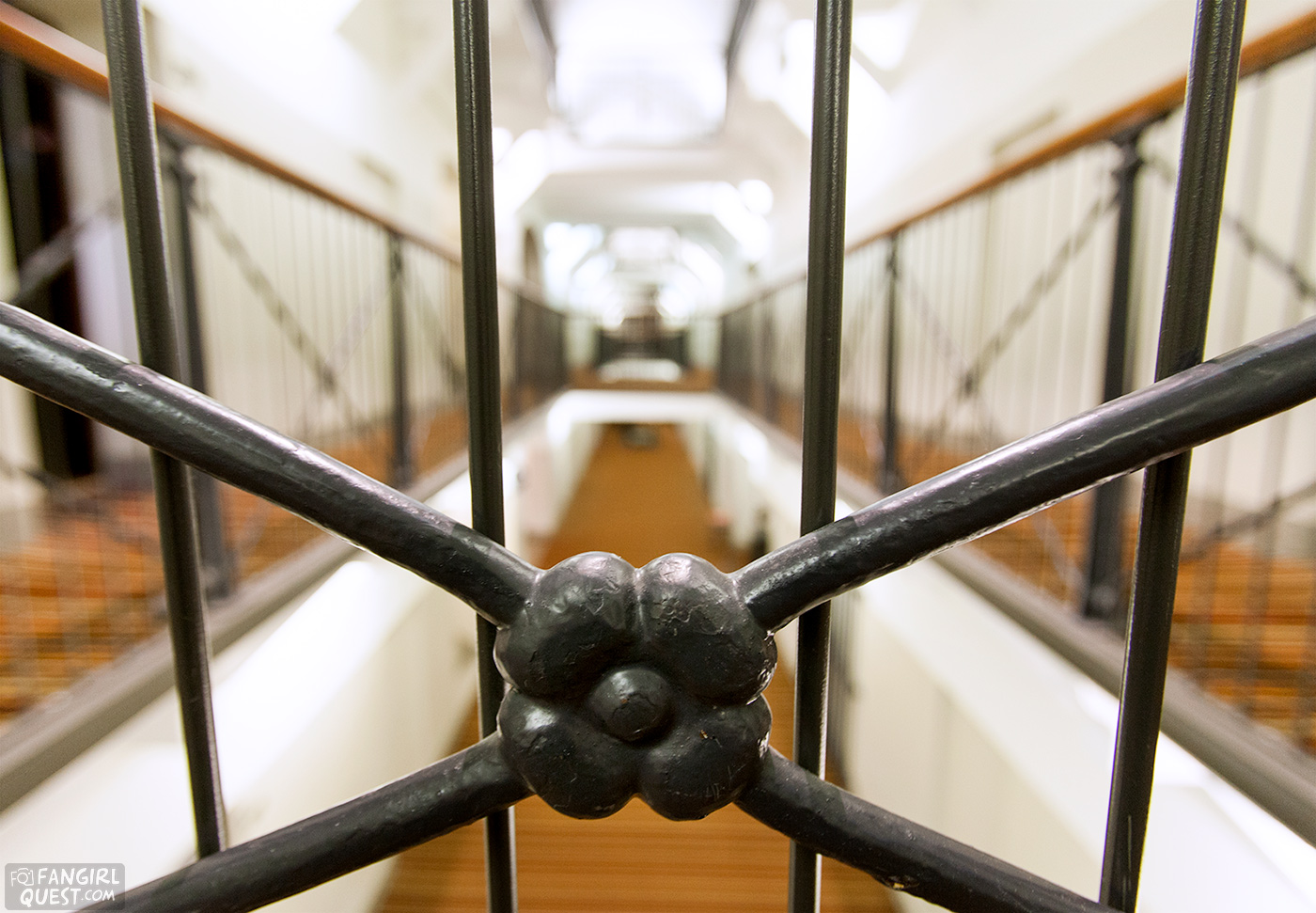 I know I’m repeating myself, but I have to say it again: I love prison hotels. Especially when they’re as beautiful and full of details as our very own Hotel Katajanokka in Helsinki is.

It makes me really happy to know that a historical building like this is being so well taken care of. Sure, its purpose has changed completely over the years and it’s now more of a luxury space for those wanting to pamper themselves a little during a visit to Helsinki. But at least the main parts will be there for (hopefully) generations to come.

Something to watch to get in the mood:

This is a collaboration post: Our stay and meals at Hotel Katajanokka were both complimentary, but the content (including photos, opinions and the experience itself) are 100% our own. We keep it honest at all times. One simply can not buy our love!