Livin’ It Up At The Grand Hotel & Suites Toronto

A hot tub on the rooftop, a super handy location, loft style suites, fully equipped kitchens… Yep. We were pretty much spoilt rotten during our stay in the city of Hannibal and Orphan Black by Grand Hotel & Suites Toronto.

The beautiful building that’s currently known as the Grand Hotel & Suites Toronto actually used to be the headquarters for the Royal Canadian Mounted Police, which is kind of cool as you couldn’t really guess the history just by visiting: the place really looks like a slightly oldey-timey, but recently modernized luxury hotel. 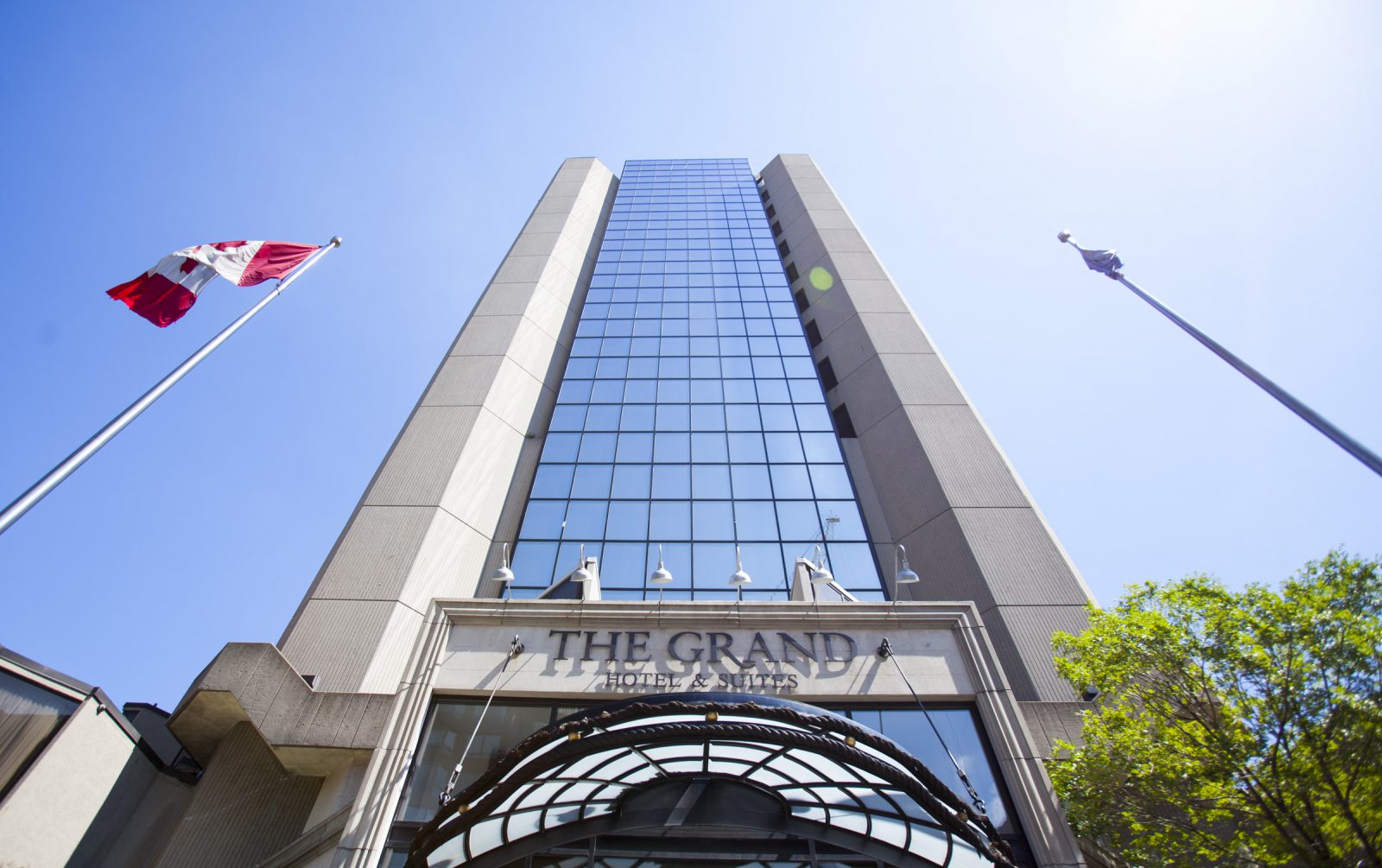 We got spoilt rotten by the Grand Hotel, to be honest. Our loft apartment was glorious: super comfy beds and lots of lovely, open space at our private disposal, desks perfect for working in the early morning while sipping on fresh coffee, lovely clean bathrooms and massive windows looking out into the city. We had a fully equipped kitchen too, but due to busy schedule, our only “cooking” turned out to be the salted caramed cookie box we opened while standing next to the counter. Yeah, we know. Quite the little housewives! 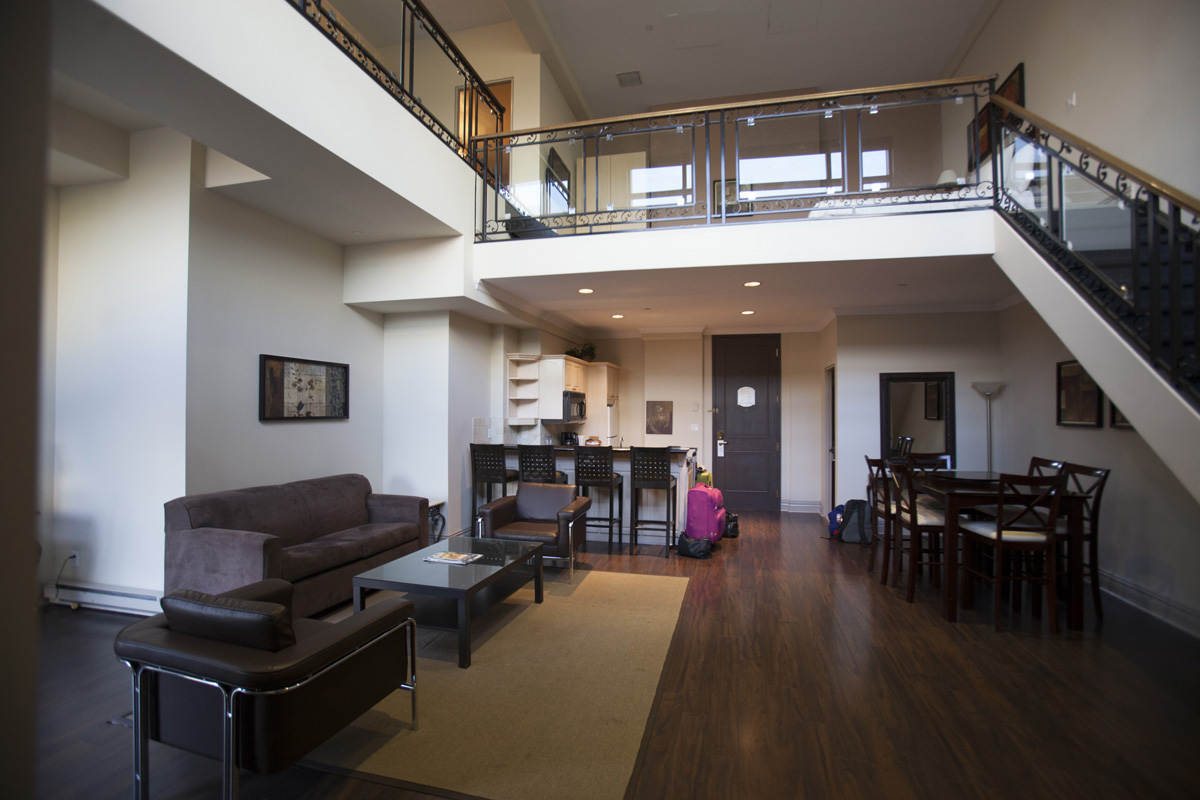 Fangirl Quest has arrived… with their bright pink luggage!

Our usual way of traveling is to share a room and save on accommodation costs, but having a little luxury every now and then is a really good thing, and quite frankly, quite necessary too. Especially when on a two month roadtrip and “moving” practically every day, arriving everywhere super tired and living out of our suitcases.

It’s also quite practical for us to stay in the same space as we’re constantly discussing route options, the following days and filming locations we’re going to visit. But of course, when traveling together for 8 weeks straight it can be quite a challenge to just get along perfectly – even with your best friend (which we are). A girl just needs her own space sometimes, you know? The loft apartment was just perfect. We had our own spaces and bathrooms, but could work on the following day comfortably together in the lounge area. 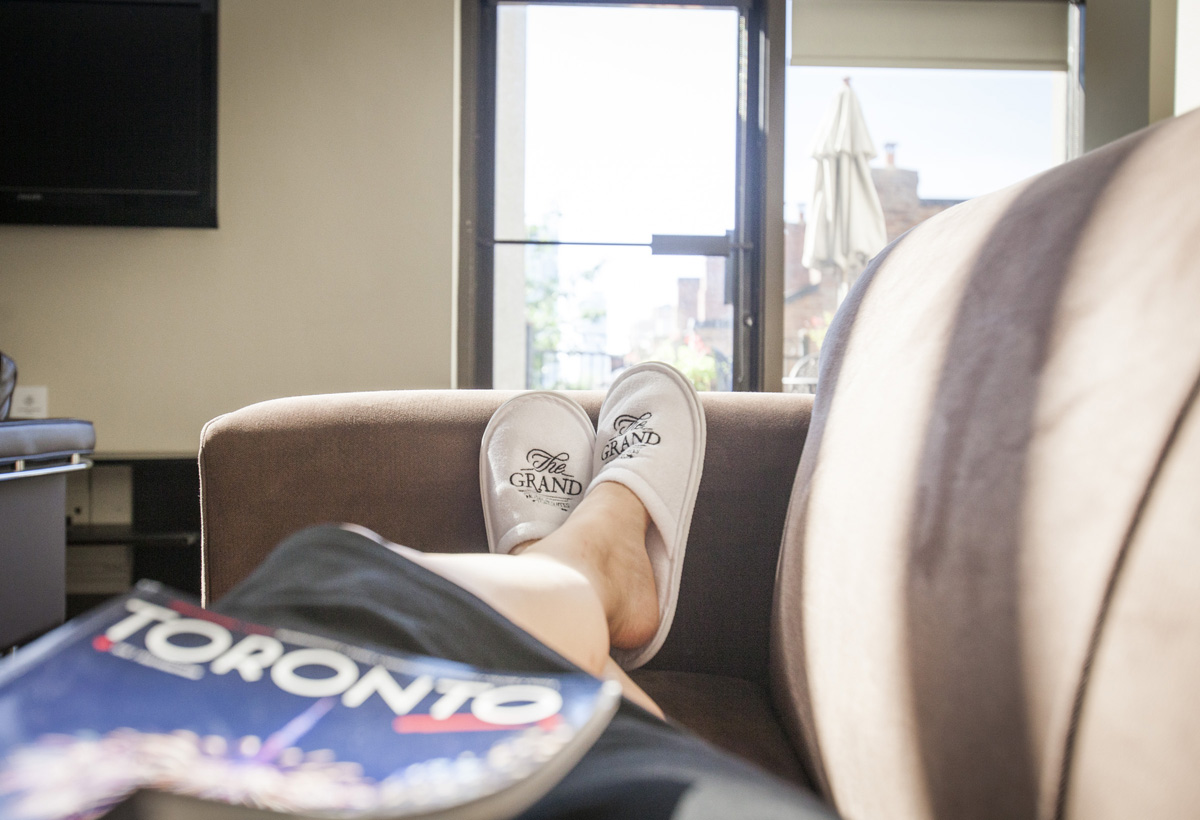 Hot tub soak on the roof!

When we arrived in Toronto and checked into the Grand Hotel & Suites, we’d already spent a couple of weeks on the road. That day we’d driven quite a long way and just wanted to find some food and then crawl into a warm bed. However, when we heard there was going to be a hot tub on the roof, our plans immediately changed. “Pffft, who needs sleep when there’s a jacuzzi?!”

So up we went in our little slippers and bathrobes and boy, it was worth it. The Grand Hotel & Suites’ rooftop isn’t quite like anything we’ve seen before: two hot tubs, two dozen deck chairs for sunbathing plus of course some glorious city views. One of the huge walls on the rooftop acted as a massive screen with 70’s and 80’s music videos projected onto it and this little addition was actually more entertaining than one could expect. Ha! So much fun watching Michael Jackson moonwalking in the moonlight high above the streets of Toronto. 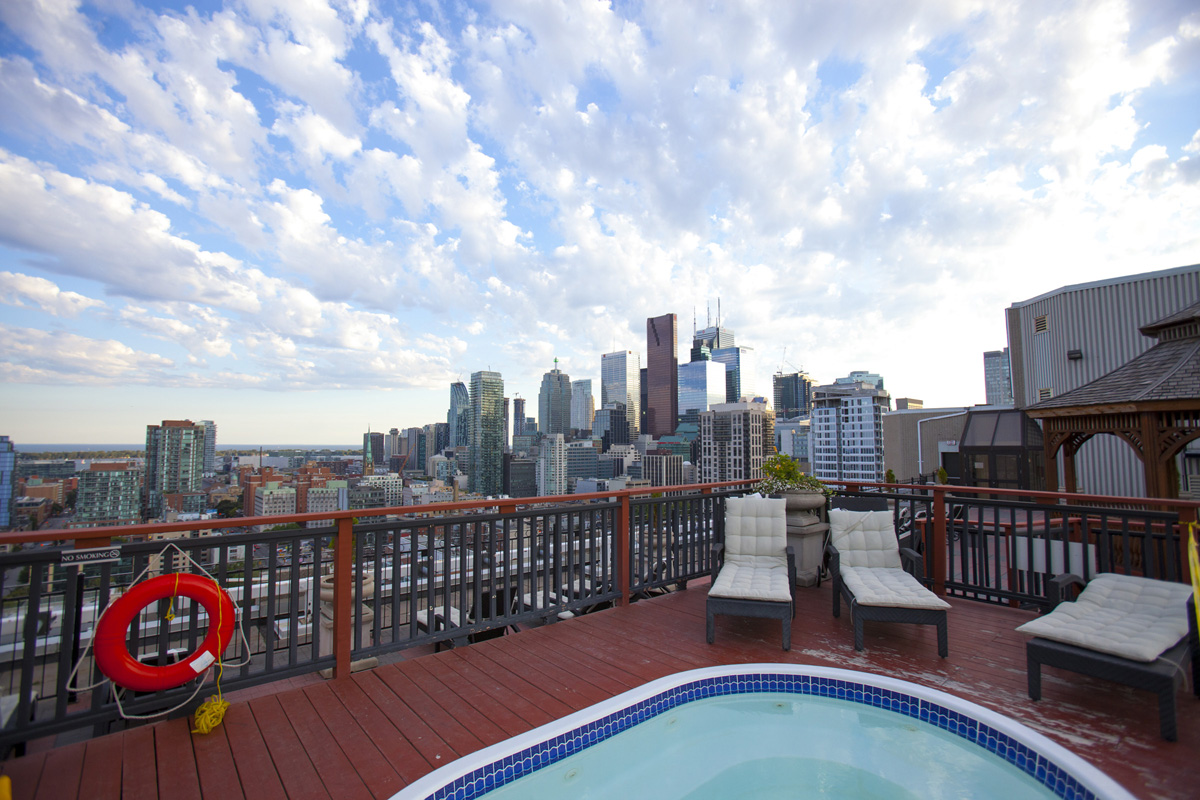 As it was already quite late, there wasn’t really much sunbathing to do, so we just settled with getting our toes wrinkly in the hot tubs. Mmm-mmm. A girl could get used to such night time pampering and relaxation.

Toronto, a fantastic travel destination for a film fan

Toronto has become one of the film hot spots with hundreds of productions taking place every year. All sorts of movies and TV shows are taking over the streets, bringing about dozens of well-known faces. In a very short period of time, Toronto has welcomed stars such as Kiefer Sutherland (Designated Survivor), Hayley Atwell (Conviction), the brilliant cast and crew of the upcoming American Gods, the ensemble of Suicide Squad and many, many others.

As big fans of the original American Gods novel by Neil Gaiman and the main actor dude Ricky Whittle, we kept our peepers open for any signs of them filming all the way to Toronto… and managed to find them filming downtown! We had a chat with a couple of the crew members and at the end of the day, managed to meet Whittle himself for a quick chat and a hug. Such a cutie! After watching him in The 100 as the always brooding character Lincoln, it was super weird seeing him happy and smiling in the streets of Toronto.

Touring the filming locations of Hannibal & The Orphan Black in Toronto

As huge, huge fans of Hannibal and Orphan Black we, of course, spent most of our time in Toronto walking in the footsteps of Mads Mikkelsen, Hugh Dancy and Tatiana Maslany.

Below you’ll find one of the Hannibal sceneframes we took. It’s a scene from the show’s final episode and features a privately owned house outside of the city. We can’t reveal the exact location as it’s private property and not open for visitors, but we have the permission to publish the photos so you’ll get a small peek behind the scenes of a brilliant, brilliant show.

For all the Orphan Black fans: here’s a little preview of one of the locations from the show.

We’ll be posting all the filming location details and more sceneframes and stories soon! 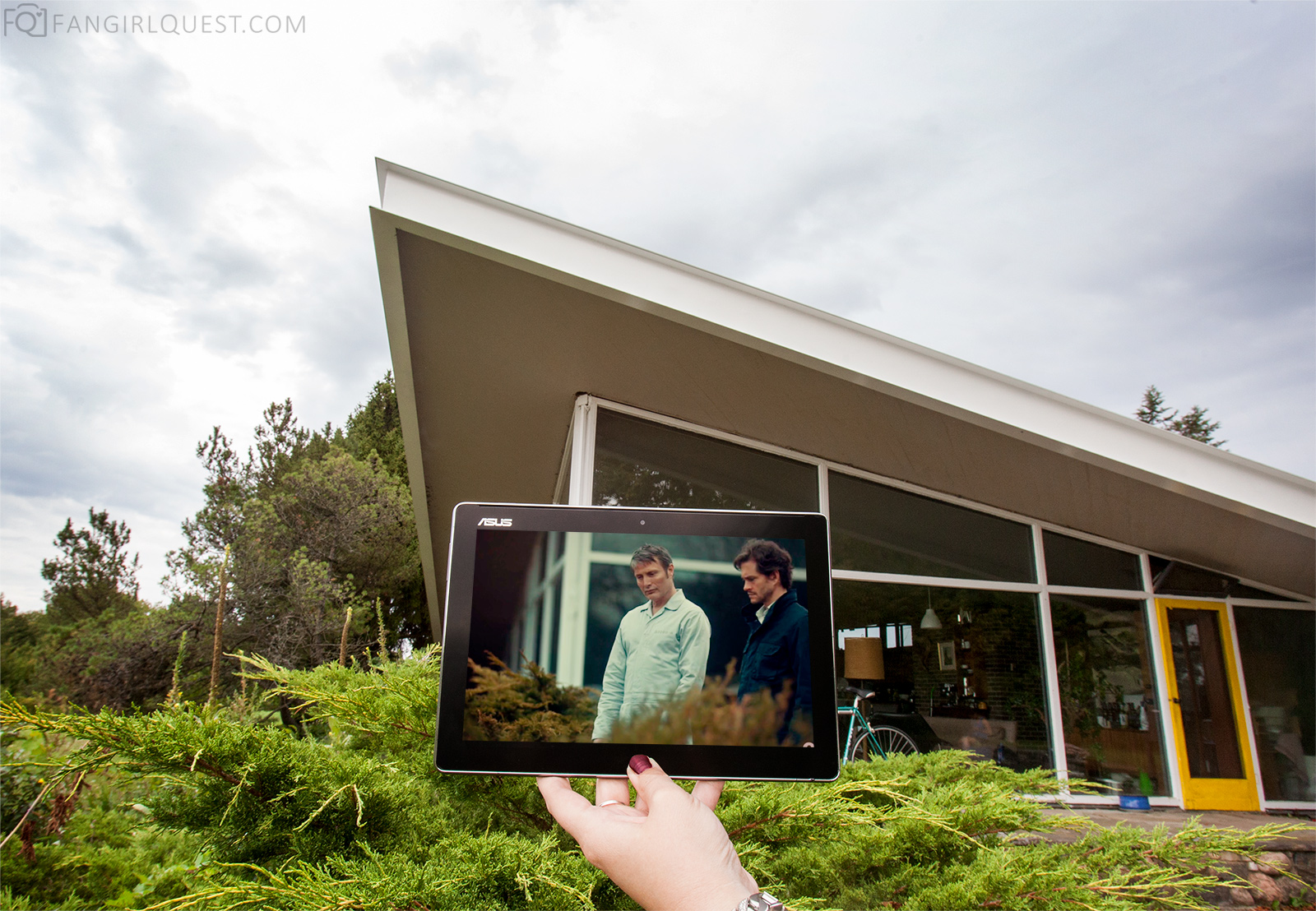 Thank you Grand Hotel & Suites for having us! We hope to come back some day for more film adventures in Toronto!

AWESOME TRAVEL TIP: If you’re visiting from Finland (like us!), the United Kingdom or the rest of Europe, you should definitely look into Icelandair’s StopOver deals and flights to Toronto. This way, you’ll not only get to experience the city, you’ll get to spend a night or few in magical Iceland for no extra flight costs!