First Time Ever In Iceland!

A Few Gishwhes Photos To Make You Smile

2016: Nobody ever talks about the fact that 250 years ago, stormtroopers who had been abandoned on planet Earth were forced to assimilate into pre-Industrial culture. Dramatically re-enact this difficult time. Show a stormtrooper getting back to basics using a spinning wheel, butter churn, or other old-fashioned tool or machine in a rural setting. Feel free to add accessories to the stormtrooper’s outfit to make their assimilation more complete—a Shaker-style hat, a musket slung over the shoulder, etc.

So, the Greatest Scavenger Hunt The World Has Ever Seen is officially over and we’re battling severe post gish depression… but looking at everyone’s Gishwhes photos certainly helps!

Here’s what Fangirl Quest and our faithful friend Johanna managed to pull off this year. These are just the photo submissions. We did a lot of videos too, but publishing those requires a little bit of consideration… because holy smokes, the ridiculous outfits and annoying amount of giggles! :)

You can check out our team, Team Scrumtrulescent, on Tumblr and Facebook for more submissions and more-awesome-than-average people who we’re proud to call our friends and team mates.

Right, I promised photos? Here we go. You’ll find the task description in each photo’s caption.

2016: As we all know Matt Cohen is legendary for taking off his shirt to raise money for charity. His 6-pack abs have single-abdominally raised thousands of dollars for great organizations like www.randomacts.org. Let’s thank his abs for their altruistic humanitarian work by using Photoshop to digitally remove his abs and then place them on a vacation around the world. (Unfortunately Matt can’t make this trip himself as he’s busy shooting his TV show.) His abs can visit anywhere on the planet that you can capture in an image. Let’s make sure they have the proper tourist accessories, too. 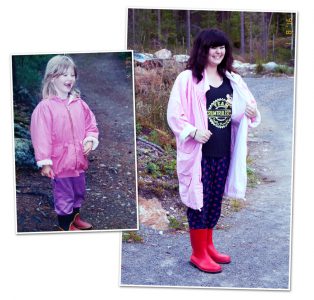 Two images, side-by-side. They say you regress to your childhood as you get older. Show us a photo from a part your childhood you’d most like to return to, and a photo of your current progress toward that regression. 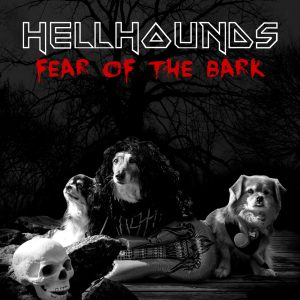 Your pet has just released their first, much anticipated, heavy metal rock album. Show us the cover art. 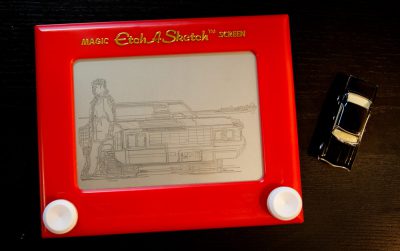 2016: Create a portrait of your favorite Supernatural actor on an Etch-A-Sketch in the style of a famous painting. 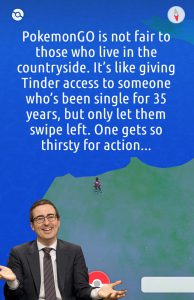 Find a little-known, but widely problematic social injustice and come up with a funny analogy for it. Use Photoshop to create an illustration of the analogy. The more ridiculous the better. Bonus points if John Oliver appears in your Photoshopped image. 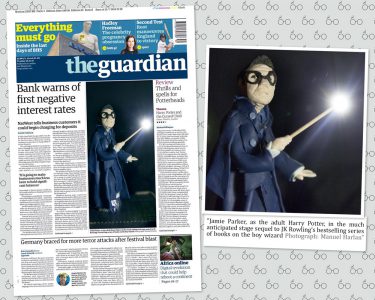 2016: Did you see the startling news on the front page of the newspaper today? Of course you did. Using Photoshop, replace the front-page photo with a photo you’ve taken of a play-dough re-enactment of the original photo. 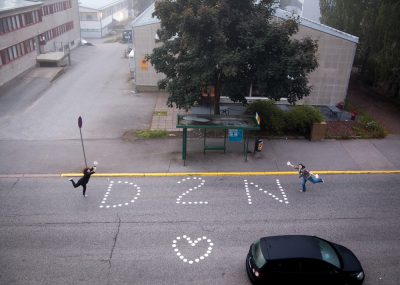 “Death 2 Normalcy”, written in “Highway Braille” (Botts Dots) on a city street. The message must be at least 20 feet long. 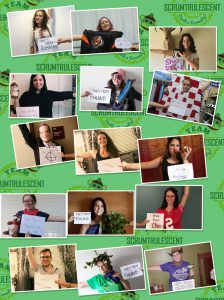 Gishwhes 2016: Grid image of all 15 of your team members (5 rows of 3 columns). Let’s see each member of your team dressed in some way emblematic of that member’s state, region or country. For example, if a team member is from New York, the photo might show that member of the team wearing a yankees hat while eating a slice of pizza. 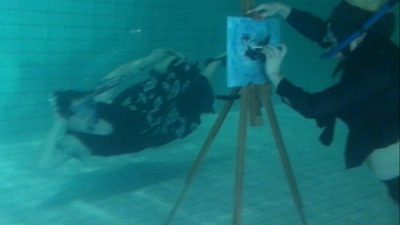 2016: Oil and water don’t mix, but in this case we’ll make an exception. Paint a portrait of a live model while both you and the model are scuba diving. Your subject(s) must be wearing formal attire and you must be wearing a beret while at your easel. 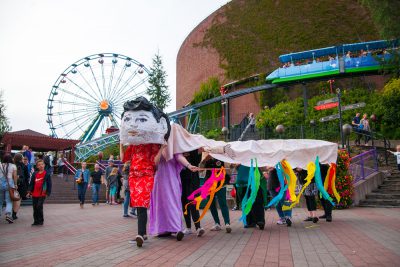 2016: You know those Chinese festival dragons where several people are hidden under the cloth of the body and tail? Make one of those, but have it be the largest Castiel ever seen: there should be one “head” and then everyone else must be under a massively long, large, and brown home-made looking trench coat behind the head (there must be at least 7 people under the “coat”). Make sure your Castiel New Year’s Festival is celebrated in public in a crowded venue. 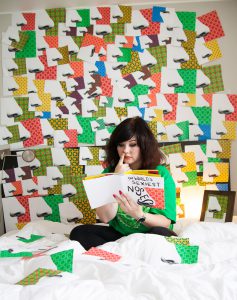 Gishwhes 2016: Wallpaper an entire wall of your bedroom with photos of your nose. You must cover every inch of the wall and must have AT LEAST 100 pictures of your nose. Pose in front of it with your finger up your nose. 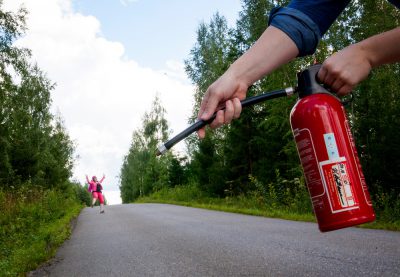 2016: Using nothing but forced perspective and a disproportionately large, “weird, unusual or scary” object that you wouldn’t want to be smaller than, make yourself look tiny. 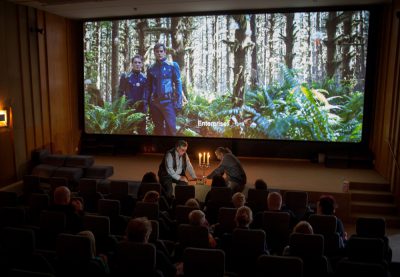 (Our tribute to Anton Yelchin.) Two elderly men playing chess by candlelight in front of the front row of a crowded movie theater while the film plays in the background. 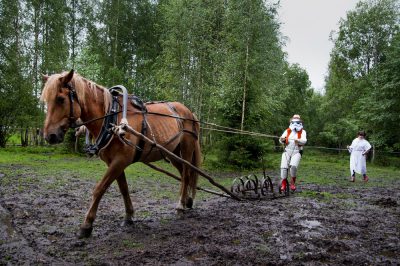 2016: Nobody ever talks about the fact that 250 years ago, stormtroopers who had been abandoned on planet Earth were forced to assimilate into pre-Industrial culture. Dramatically re-enact this difficult time. Show a stormtrooper getting back to basics using a spinning wheel, butter churn, or other old-fashioned tool or machine in a rural setting. Feel free to add accessories to the stormtrooper’s outfit to make their assimilation more complete—a Shaker-style hat, a musket slung over the shoulder, etc. 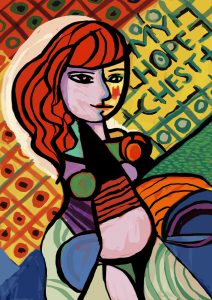 2016: It’s a well-known fact that Pablo Picasso was a huge “Supernatural” fan. He painted portraits of Mark Sheppard, Jensen Ackles, Ruth Connell, Sam Smith, Richard Speight Jr., Matt Cohen, Jared Padalecki, Andrew Dabb, Rob Benedict, Misha Collins, Bob Singer, and many of the other cast and crew members. Sadly, until now, these great works have been lost to the world. Fortunately, your team has unearthed one of these priceless works. 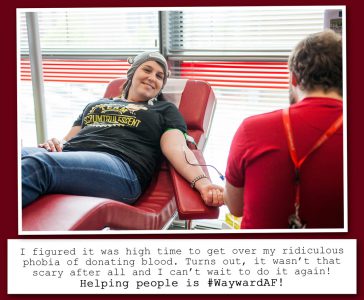 2016: Being #WaywardAF sometimes means being #BadassAF. Take a picture of you doing something you have ALWAYS wanted to do but were afraid to try. Caption your photo with a short explanation and post it to Twitter tagging @OfficialBrianaB and @kimrhodes4real. 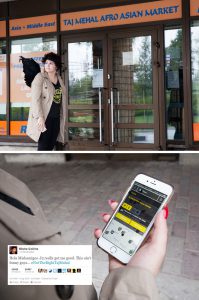 Misha loves to travel, but between filming, gishing, and that thing we never talk about in front of polite company, he hasn’t had much time lately. Help Misha out by cosplaying as him in front of one of the 7 modern wonders of the world. (Sometimes, when we can’t deliver what is asked, we go the funny way. Points or not!) 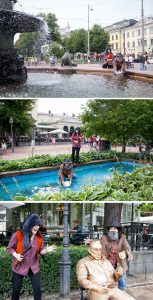 2016: Dress up as a prospector and pan for gold in a public fountain.