Anton Yelchin And Why No-One Should Judge A Mourning Fan 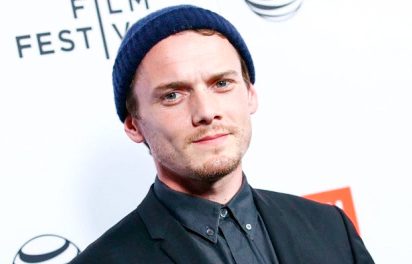 Everyone knows how it goes. A celebrity dies and all the social media platforms explode. News websites, even some people who’d never seen any of their movies or listened to their music, rush into sharing the shocking headlines just to be the first ones to do so. Among them are the actual friends of the deceased and the fans who have lost their idol. And those are the ones that will break my heart over and over again, for as long as they keep coming. 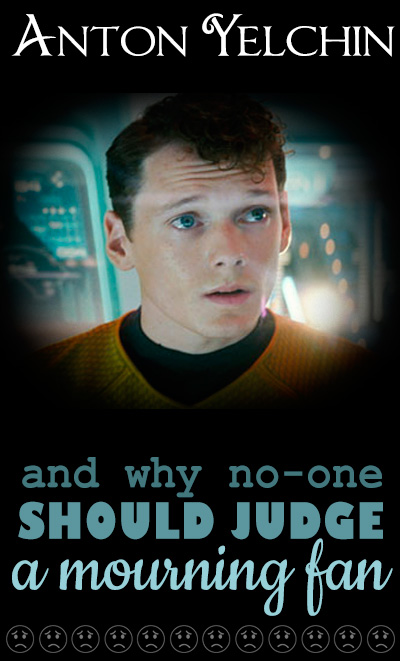 When we fans notice the news, our first reaction is a raw, shocked, heartbroken, gasped out loud “NO.” It’s not on opportunity to be the first one to share the breaking news. It’s tragedy. It’s heartbreak. It’s sorrow.

Today is one of those days.

Anton Yelchin is gone. Killed by his own car in his own yard at 27.

As I’m typing this, my Tweetdeck is flooded with sad messages full of love for the beloved Star Trek, Odd Thomas and Only Lovers Left Alive star. And I will very sadly admit that I’ve shed a few tears too, while reading all the reactions from his cast mates and fans. They are full of heartbreak and shock and disappointment, and I want to retweet every single one of them, even though I know it wouldn’t change anything. He’s gone. A talented, young fella we watched on the big screens has been taken from his family and the world who was watching.

No no no please

If you’ve ever mourned a celebrity, you know what losing them feels like. We mourn, and it’s very real, even devastating for some of us.

Wasn’t crying but now I am pic.twitter.com/v7Gdjf42D0

The trolls will always come

But not everyone gets this. For some reason, some muggles of the world take the fans’ mourning personally. Like they’re somehow offended that we liked a celebrity – maybe just a different celebrity from theirs. In some weird way, applying some twisted logic, they’re insulted that we’re sad for losing these people. The same pattern repeats every time: a famous person dies. People mourn and tell the rest of the world how they loved the person. Other fans join in. Memories are being shared, favorite things they did are being discussed, an outpour of loving support and heartfelt condolences are sent to their loved ones on social media.

(And we of course know that most of these condolences won’t ever reach any of them. But the way I see it, it’s part of the process of mourning: we can’t go to their parents’ house, or hug their little sister and say we’re sorry, but we feel the need to do so. And so we do it the only way we can.)

Anton was very thoughtful, very smart and very understated when we talked or ran into each other. Genuinely a sweet guy. RIP.

And then the bullies crawl out of their miserable holes and join the discussion. They look at all the fuss over “just some Hollywood guy” and decide they need to remind everyone that there are worse things happening in the world.

“Oh, someone rich and famous died, boohoo, why aren’t you sad for the starving children?”
“Jeez, people, your lives must be really poor if a dude from Hollywood means so much to you.”

It always happens. The trolls will come, and they will try to feel superior over you by letting you know that what you’re feeling is stupid. But it’s not. My god, it is not.

Oh, Anton. Such a dedicated, generous and hyper-smart young man. So grateful for the time we shared, destroyed he left so soon.

But why do we mourn a person we didn’t know?

I don’t even know why I’m answering this question (as it should be obvious), but let me. Let’s do it for the trolls and the meanies and the bullies who exploit our sadness to feel better about themselves. Let’s do it to support the teenage girl who’s being shamed for crying in class because someone she adored died. Let’s just do it.

Why do we feel sad when we lose an idol? Well, let’s think about it for a second.

Could it be because they’ve given us something to laugh about? To cry about? Because they’ve inspired us to pursue some career ourselves, in acting or music or in whatever it is they did well? Or because they used their publicity to support those who are suffering, inspired us to do good, or told us fight for our rights? Or maybe because they just told us “it gets better”, or “always keep fighting”, and helped us through a rough patch in our lives?

These are just the first things that come to mind. These are things that Anton Yelchin alone has probably given to thousands of people around the world just by appearing in a bunch of entertaining movies and by being kind to his fans whenever he met them face to face. Just like that. That’s more of a difference than the majority of people these fans actually do know will ever make in their lives.

At least, that’s definitely true in my personal case, and I have a lot of friends and acquaintances.

Also, dear trolls: you not being sad doesn’t cancel out other people’s sadness. Not today, not ever.

Devastated to hear about the brilliant Anton Yelchin. He was thoughtful, kind, and gifted. My thoughts and prayers are with his family.

But you do understand the difference between losing a stranger and losing someone who’s made a difference in your life? You do, don’t you?

We are allowed to mourn. Every single fan of any musician, writer, actor, athlete or performer is allowed to be upset when they lose their idol, and there’s nothing there for anyone to judge.

After all, it’s the Anton Yelchins of the world that help us escape the sadness of the real world. And that’s quite an effect to have on people’s lives.

Rest in peace, Anton. Thanks for all the feels.