Is This The Best Sherlock Cosplay Of All Times?

Last time in Vancouver we got lucky: we stumbled onto Supernatural filming and met Misha Collins & Tahmoh Penikett! The smiles on our faces say it all...

So, we really managed to do a Supernatural set visit while in Vancouver. It was our last day in Vancouver and we had completely given up hope of catching any Supernatural filming. So, on Monday morning, as we were visiting their previous filming locations in the Delta area (where many parts of the show were filmed, such as the crossroad scenes, Roadhouse exteriors and the gas station bit where Castiel first speaks to Dean), we accidentally bumped into a location sign..

HOPES WENT UP. EXCITEMENT ENSUED. Sensible things like “they can’t be filming on Easter Monday, let’s not be disappointed if it’s not them” were said. Hopeful sentences like “but what if they are?!” were uttered aloud.

So we followed the signs and ended up in a very well hidden marina park.. and then we saw the trucks and members of the crew. We talked to a very nice girl who confirmed they were, indeed, filming Supernatural. We got the impression from her it would be ok to go and take a peek and indeed it was. After a little walk around the park we bumped into the filming crew and ta-dah! There they were. Misha Collins and Tahmoh Penikett filming a scene on a playground. 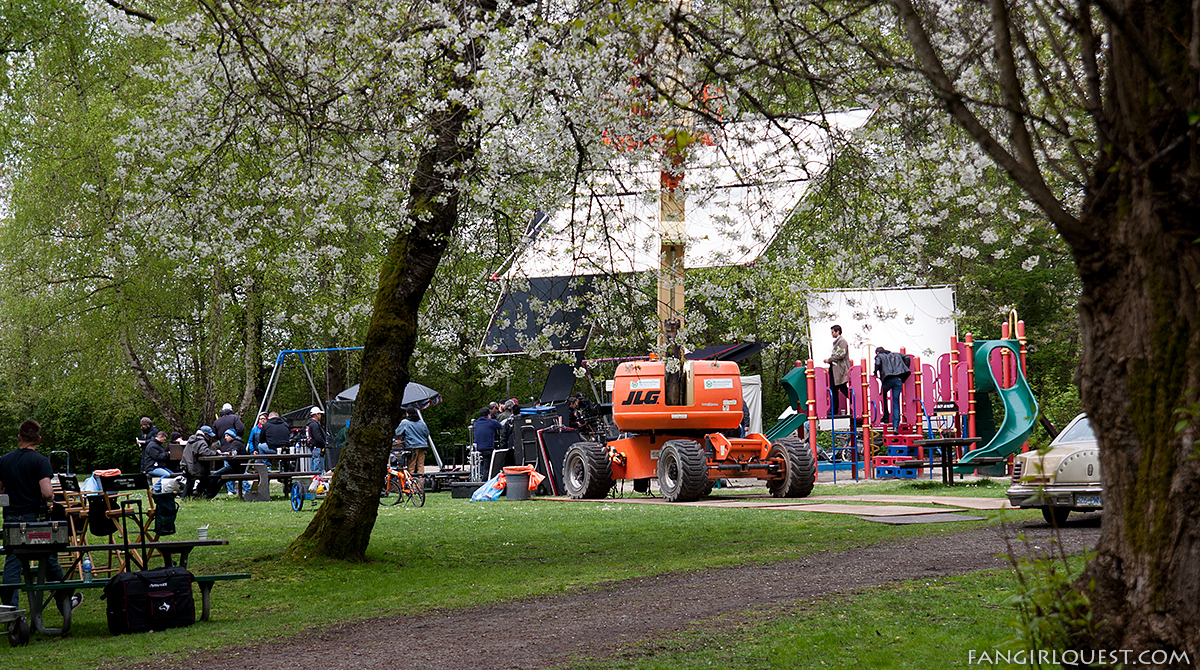 The Supernatural set in a playground outside Vancouver.

We were adviced to stand at the park gates where I snapped these photos from. Everyone was extra nice, we talked to a couple of people and all the people passing by said good day or hello. We worried that we were being intrusive or in the way, but it genuinely didn’t seem like it. What a lovely bunch of people!

(In case any one of you is reading this, you’ve honestly made our year. This was quite likely a once in a lifetime thing for us and we’re so thankful for the extra friendly treatment!)

After maybe just 20 minutes of hanging around we spotted Misha and Tahmoh walking towards us and totally didn’t freak out at all. Like, nope. Not us. I asked if they had a minute (sure they did!) and we talked for a little while, told them about our roadtrip and why we were here and all that jazz. We feel a bit sad now for not telling them how much this show means to us, how Gishwhes has genuinely changed bits of our lives and what a great inspiration Misha’s been in so many ways, but I guess they hear that all the time.. it’s just, we had the chance to tell him all this and we missed it! 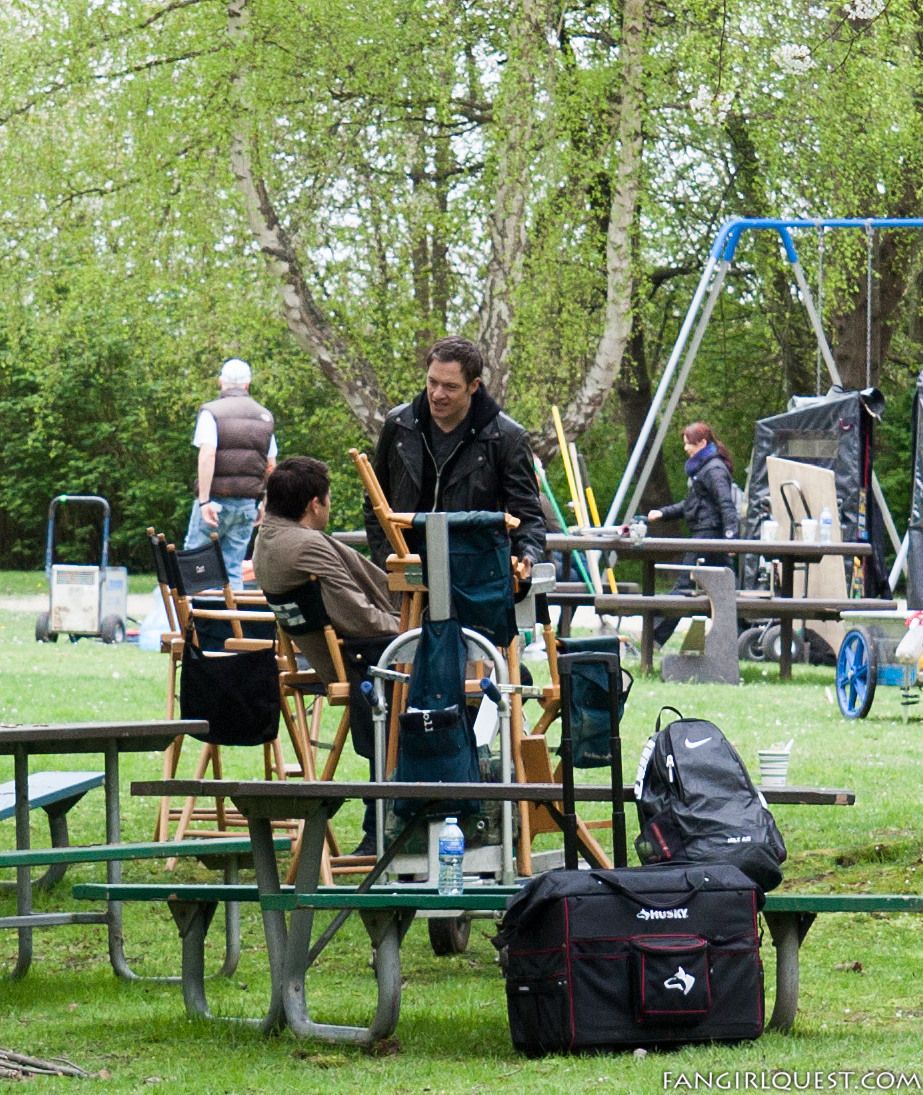 Misha Collins and Tahmoh Penikett filming a scene in Vancouver.

Ah, well! Who can blame us for being a little speechless in that moment?

Finally, it was Misha who asked if we wanted to have our photo taken with them. Guess we were just too confused and happy to ask for it ourselves. This photo is now one of my most favourite photos of all times in the whole universe, by the way.

After our chat, the guys returned to their jobs and we could see our pink Fangirl Quest flyer peeking out of Tahmoh’s back pocket as he went.. which is all sorts of cool and quite unreal. 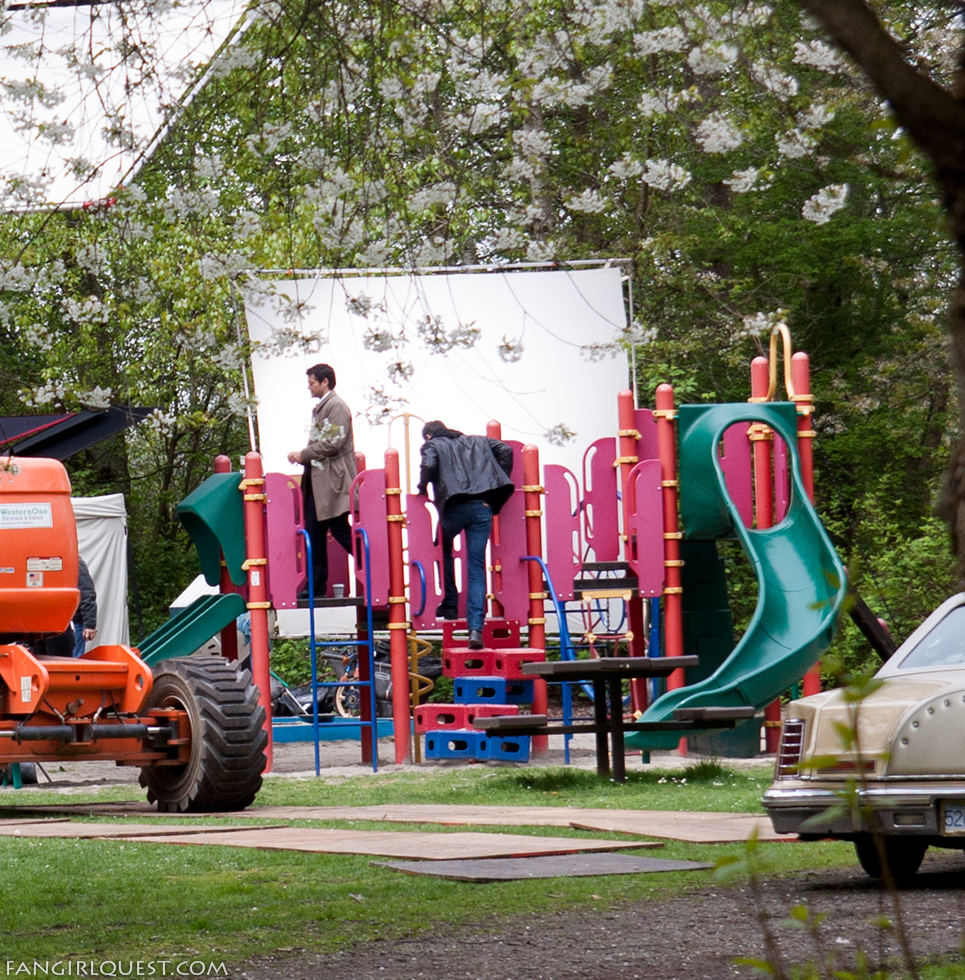 Angels need their playtime too!

We’re not sure if they’ll be interested enough to actually visit our blog and see our sceneframing photos, but the possibility of it is enough. It’s a nice dream, innit? 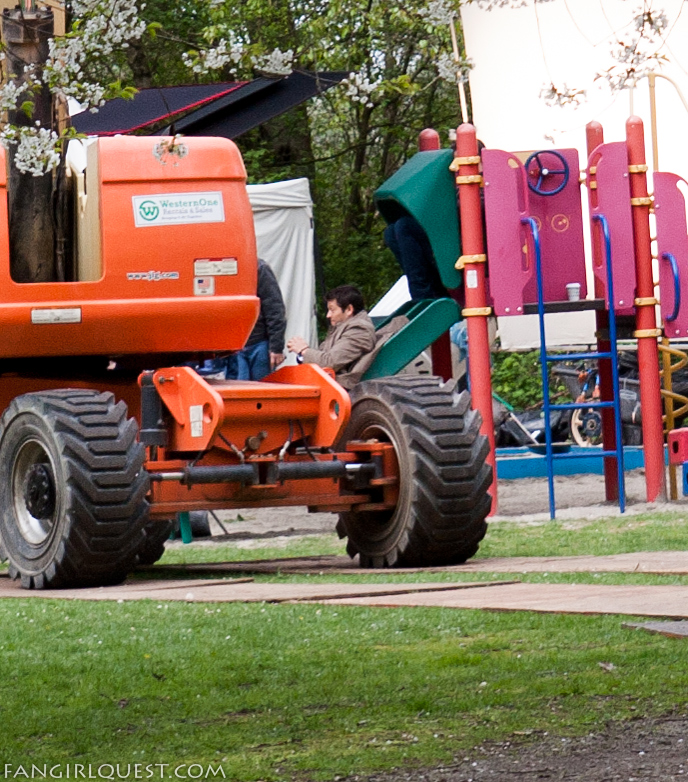 Yup. That’s Misha sliding down a kids’ slide in a playground.

Here, have a look at that photo we got with them. What a happy looking bunch we are! This was the randomest but such a magnificent Supernatural set visit for distant fangirls. Truly.

Last time in Vancouver we got lucky: we stumbled onto Supernatural filming and met Misha Collins & Tahmoh Penikett! The smiles on our faces say it all…