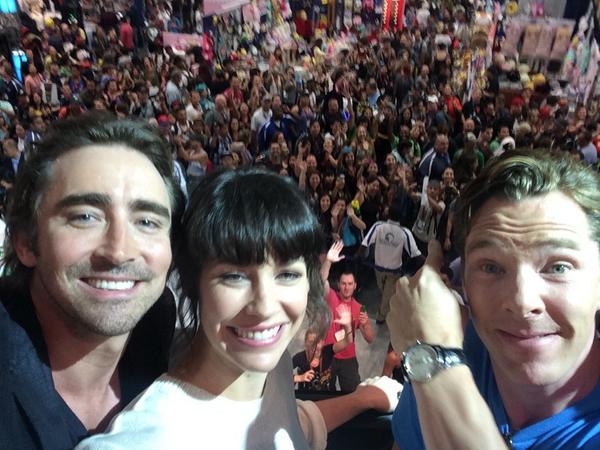 Here’s some of our favourite Cumberbits for those who are not in San Diego and/or are too busy to get lost in the magical world of social media and YouTube to see all these things.

We’ll be publishing more posts covering all the other fun things we’ve spotted, so keep an eye out!

In the meanwhile, let’s take a look at Mr. Cumberbatch’s trip to San Diego!

Here we go. So this guy

attended the San Diego Comic Con for the very first time and his appearance got many people very excited:

During the weekend, Benny hung out with some legendary cast mates of his, like Andy Serkis, John Malkovich and Smaug:

along with some amazing faces from The Hobbit

and Chris Hardwick aka The Nerdist:

and of course, a penguin:

But for this one, Fangirl Quest’s Tiia lost her soul:

But it’s ok because it was totally worth it.

Pointybatch made an appearance too, this time to snap a quick dorky selfie with the fans:

He was nicely interviewed by the LA Times, posed approriately for EW with his cast mates from Penguins of Madagascar and did the Greatest Dragon Voice Ever for our new hero The Button Lady. Amidst all the excitement, he apparently lost his shoes:

and when asked which superhero he’d like to play, answered Batman (and which, of course, generated a ridiculous amount of buzz on Twitter and several entertainment sites)

But one of our absolute favourite things about Benedict’s SDCC weekend was this fun interview with our favourite tv host, Josh Horowitz. And of course, they posed for Josh’s amazing series of happy/sad/confused:

(Check out The Walking Dead and Supernatural editions of SEEN FROM A SOFA!)