Aidan Turner is the happiest puppy in the world!

We spent all day in the freezing cold, met amazing fellow fans in the queues and after the event and basically froze our fangirl butts off. All for what? Well, for the most beautiful red carpet event ever, of course: The Hobbit world premiere in London on December 1st, 2014.

We thought we’d be quite early for the wristband queue and do ok red-carpet-edge-spot-wise if we arrived to Leicester Square early Sunday morning (36 hours before the actual event), but boy, were we wrong. We got there early alright, but the numbers they scribbled on our hands were well over 700.

After that reality hit, we were pretty certain we’d end up standing somewhere in the back rows. But we decided to do the whole queueing thing anyway. And lo and behold, after a whole day of queueing in the cold we somehow magically still managed to get pretty good spots in the front row. We were extatic about it, of course, until someone told me we were actually standing in the arrival area and that we wouldn’t be seeing much, other than a lot of darkened car windows and backs of people’s heads.

Ah, well, we thought – at least we were there, at least we were living it all. The first few arrivals came and went, Lee Pace not even glancing our way (at which point Tiia hid her carefully painted & printed portrait of him, sob), Richard Armitage disappearing quickly into the green carpet crowds and Luke Evans only signing for the first few folks right at the entrance.

At this point we felt sort of disappointed. Was all the suffering really worth this? Were we out of our minds for doing this time after time after time? Why were we putting ourselves out there when all we were gonna get was screaming crowds pushing us around, stepping on our frozen toes already hurting, when we could’ve been sitting at home under blankets seeing it all close-up on our tv screen?

And then… WHAM. There was a change in the east wind. The gods of fandom must’ve heard our desperate, sad thoughts because for some reason, people started coming. The cars still stopped far away from us, the actors still climbed out of them way out of reach. But our luck had turned: most of them ignored the green carpet entrance and instead, turned around and walked back to our big party of late-comers.

In the following short hour or two we (briefly) met Ian McKellen, Benedict Cumberbatch, Andy Serkis, James Nesbitt, Aidan Turner, Orlando Bloom and saw so, so many more. They were all in good spirits, signing as much as they could, posing for photos, all happy and dapper.

And yes, we said to each other: this is why we do it. This is why. If you get to say “thank you” face-to-face to the likes of Sir Ian McKellen and hear him repeat it back to you, looking straight at you with a little smile, it’s worth all the hours in the cold, all the stress, everything.

And here’s one of our favourite things that happened: Orlando spent a looot of time in the back area, signing for hundreds of fans. Then, right next to us, he accidentally scribbled on a fan’s drawing of Martin Freeman. His reaction to his mistake was PRICELESS. “Oh, that’s not me! Oh no! Did you draw this for him? Oh my god! OH MY GOD!!! I’m so sorry! Please don’t tell him it was me!!” he kept rambling, covering his face with his hands

Aidan Turner was being a total darling as well, going around like a happy little puppy greeting everyone. He even added a little messy “KILI” underneath his signature ech time… just in case we’d forget one of our favourite characters in the movie, I guess?

After the arrivals we stood around for a while, dazed and confused, happy and hungry, and wandered off to get some food. We came back later and by sheer random luck, were there in time to wave goodbye to Peter Jackson, Ed Sheeran and many more. (Well, ok. When I say luck, I mean that we waited around for another 45 minutes. Because clearly the 12 hours in the cold wasn’t enough, no.)

Today we’ll be heading back home, back to our regular schedule and day jobs, but we’ll be smiling for weeks to come. Good stuff.

Until the next time, folks!

PS: If we met you in the queue / somewhere afterwards, do say hello in the comments or on Twitter, or whatever means of communication you prefer. We’d love to hear from you! :) 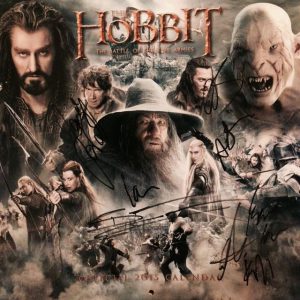 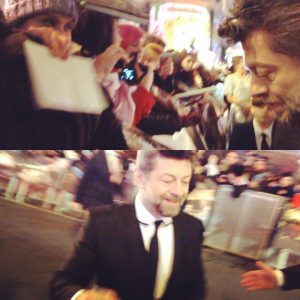 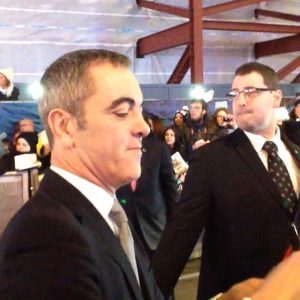 James Nesbitt, such a darling! 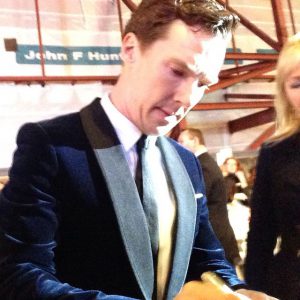 Who’s the cutest? Benedict Cumberbatch is. Don’t deny it. 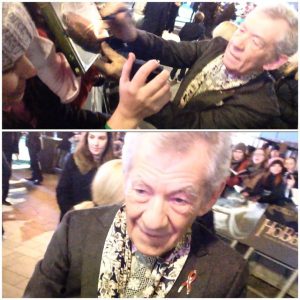 Sir Ian McKellen smiling and signing for us. Aw!