Game of Thrones: The Hall Of Faces Exhibition Helsinki

Adele Live At O2 In Photos

During Rolling in the Deep we got a confetti rain. I collected a bunch - each of them had little messages or bits of lyrics written in Adele's handwriting.

A few months ago, Adele‘s four concerts at London’s O2 were announced and with our friend Essi, we mentally prepared for the ticket battle. Seeing Adele live on stage had been on both of our bucket lists for a long time, so we were absolutely ready to get that one crossed off our lists. But as you can imagine, the ticket sales were absolutely nuts. The first 80,000 tickets were sold out long before we even got through the virtual queues.

But phew, soon after they announced another four O2 concerts and this time, we were clever enough to find our way to the fan pre-sales and managed to grab a couple of tickets. The most stressful ticket sales ever, I can tell you!

After our Adele live date was confirmed, I even managed to organize our travel blogger group’s trip to London for the preceding weekend, and a trip to Cardiff with Satu & Johanna for the days following the concert. And I couldn’t be happier: it’s pretty rare that everyone’s schedules work out so well together in the end.

YAY-worthy: seeing Adele live after all these years!

After a super douper fun weekend with our travel blogger squad We Make Things Happen I spent a lazy Monday at Essi’s house. On Tuesday morning, April 5th, we woke up to the reality of it finally being The Day. We both tried to concentrate on some work stuff (while blasting out Adele’s latest album 25, of course), but in the afternoon we finally gave in and started getting ready. Fake lashes, pretty skirts, heels and my travel companion, Canon EOS M10, which I figured I would be allowed to bring to the venue.

And I was! Which is why I can now show you some of my favourite shots from our evening with Adele.

The best part? Our tickets said row M, when in fact, we were seated in the second row from the stage.

“OMG. She’s going to be RIGHT THERE”, we gasped and shared a few excited giggles with the people sitting next to us.

Hey, and in case you’re going to see her live during her tour in North America, be warned: the photos might spoil some of the lovely surprises that occur during the concert. Well, that is, if they have the same set-up planned for you lucky guys who are still seeing her this year!

Adele live at O2 in photos

All photos taken with Canon EOS M10 + the kit lens. 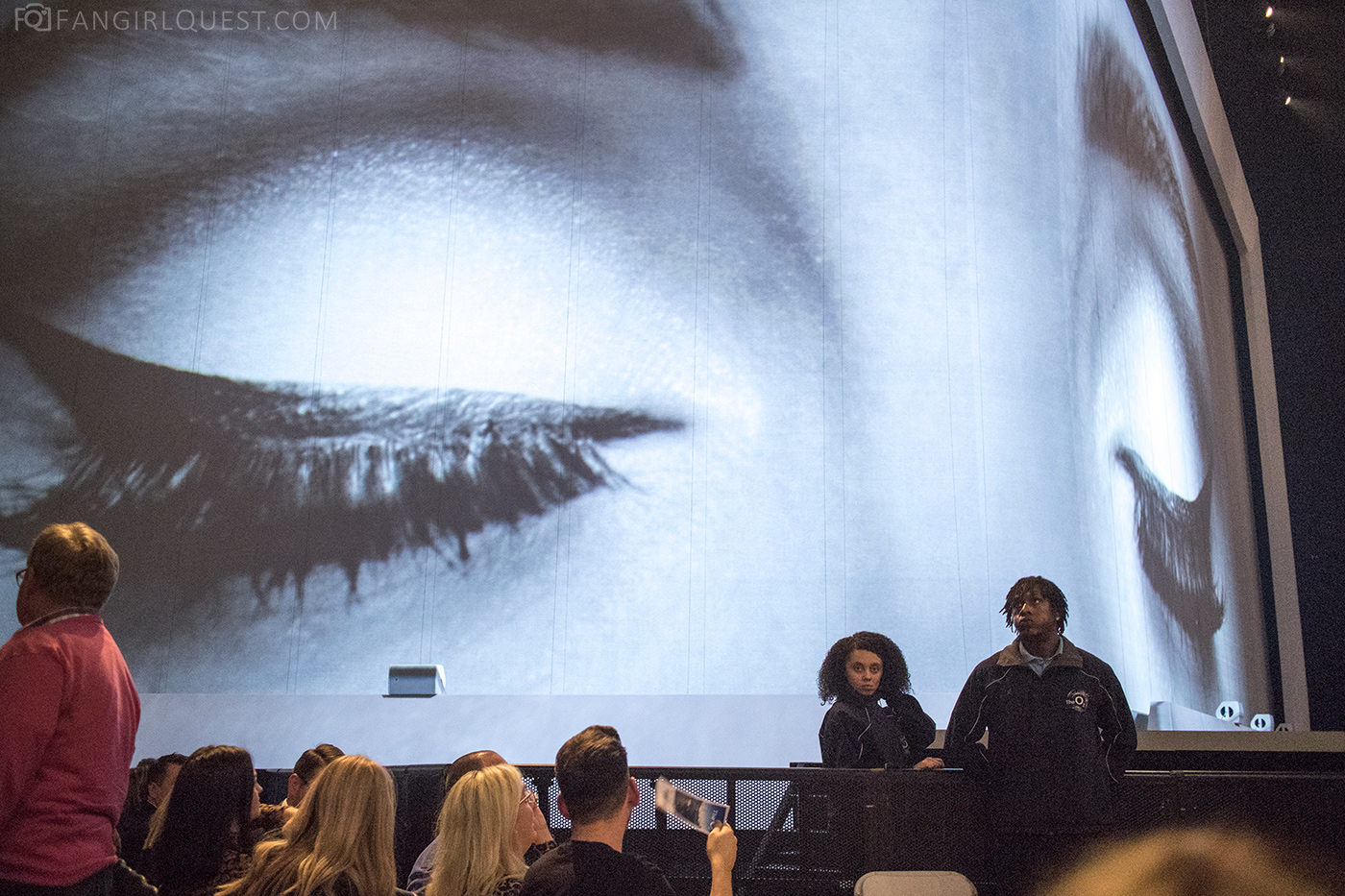 The artist’s closed eyes on massive screen before she got on stage. Also… pretty good seats aye?! 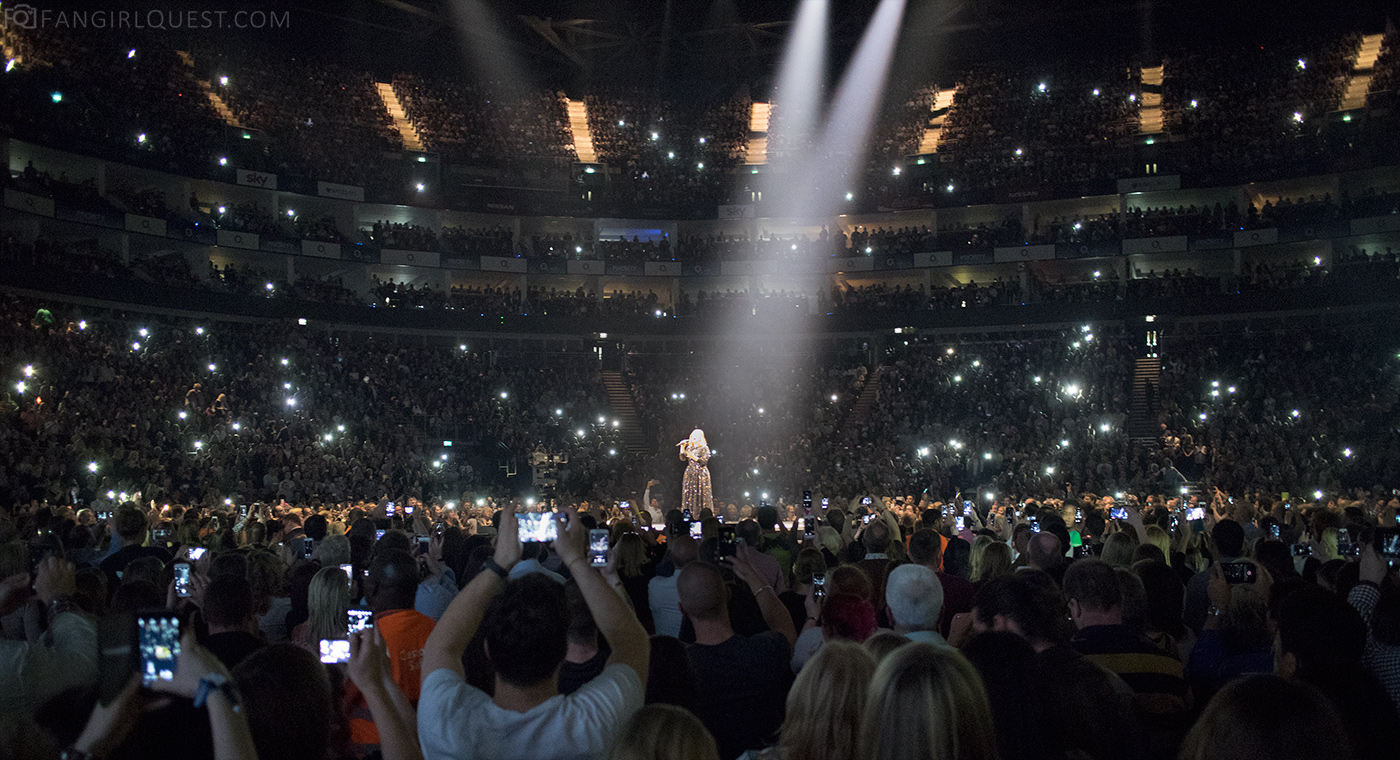 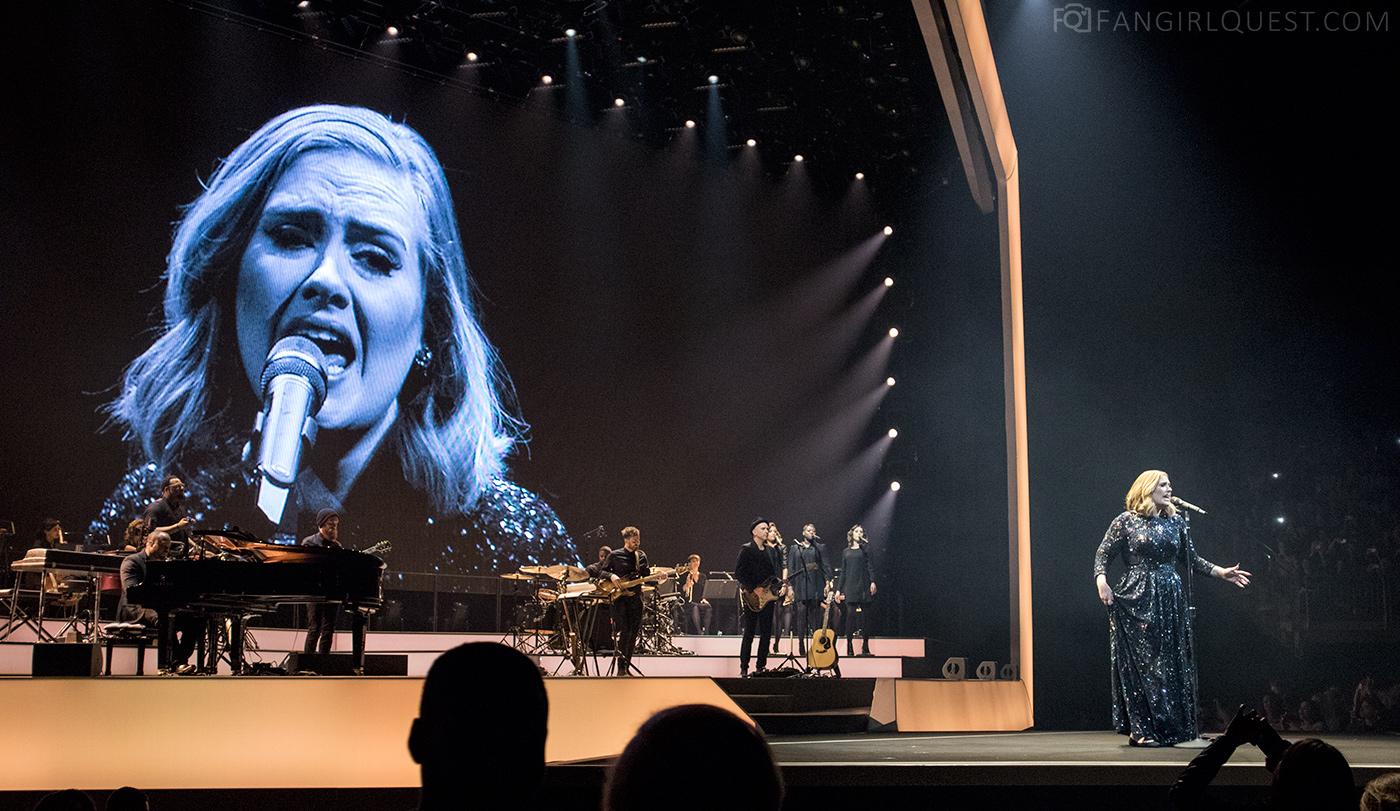 The band revealed from behind the curtain after a couple of songs. 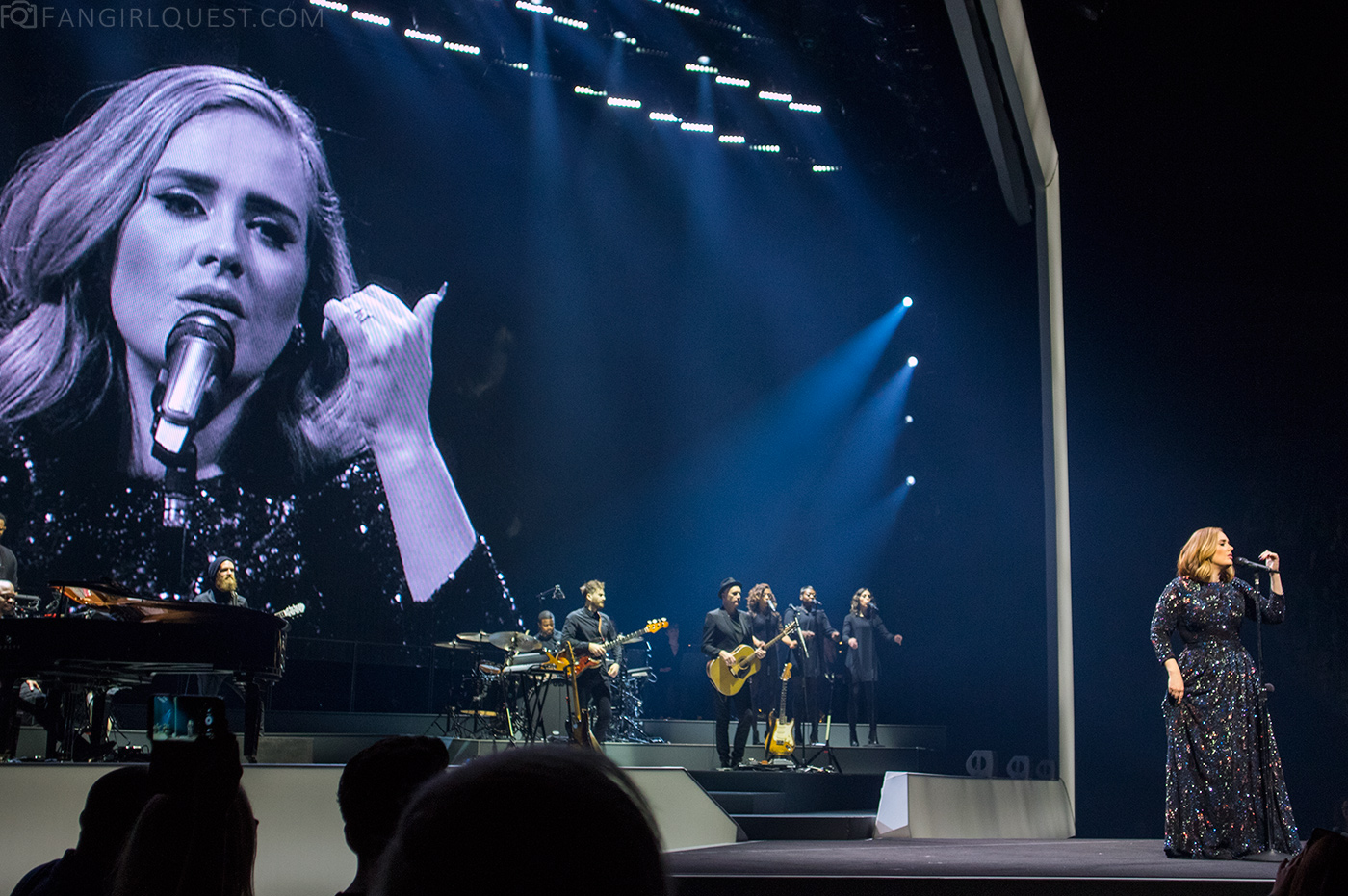 Adele was wearing a black full length dress with flats. 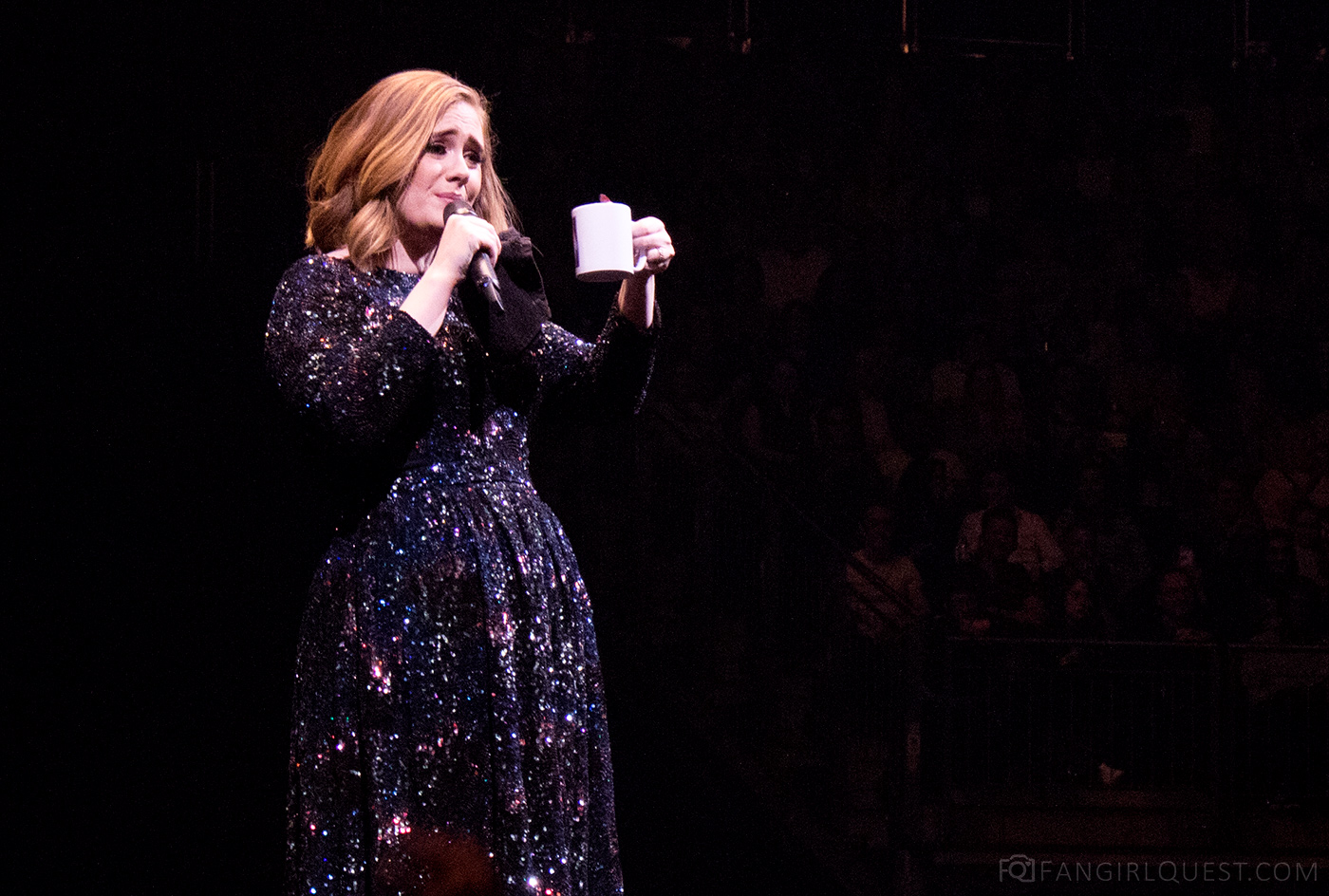 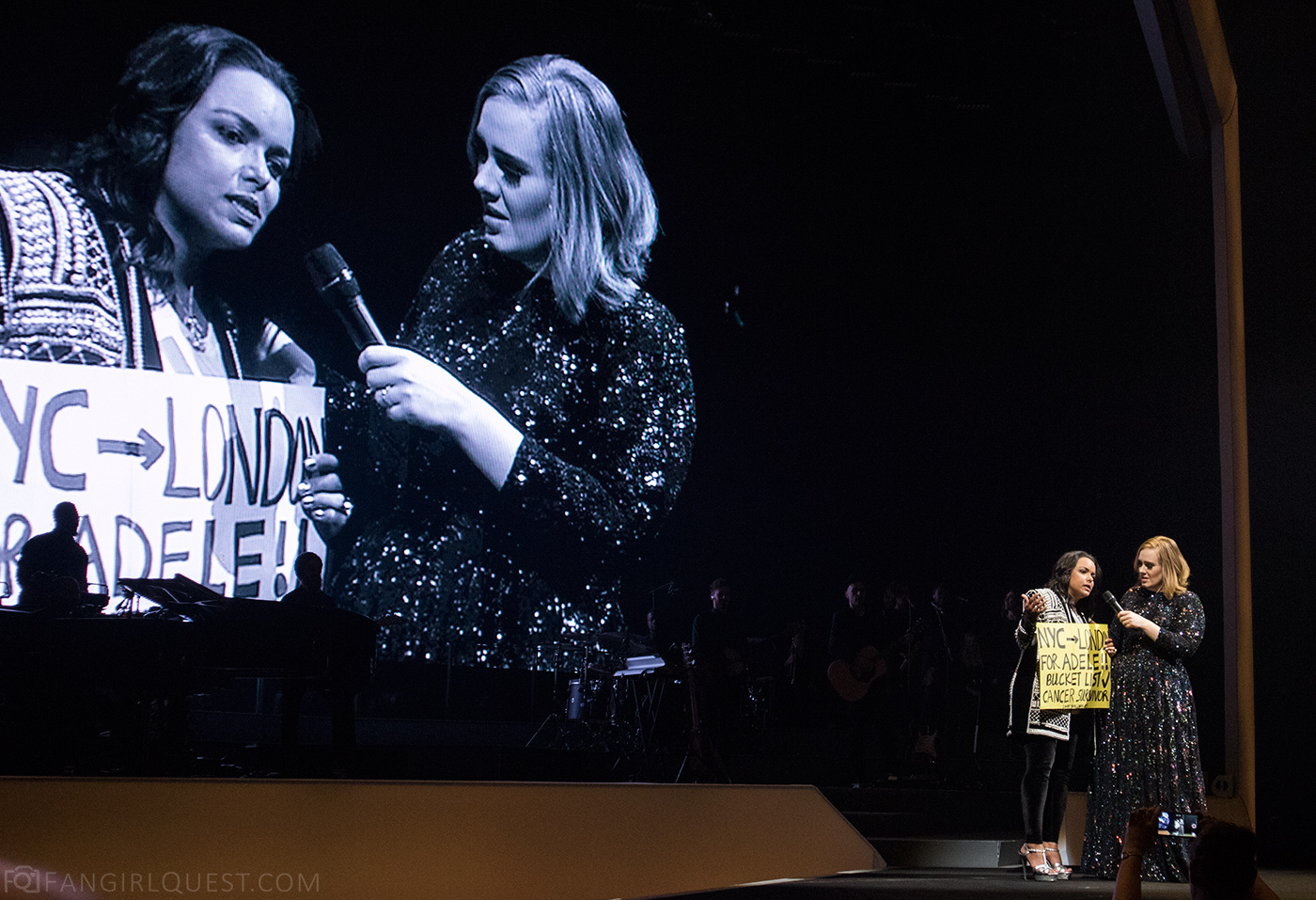 A cancer survivor from NYC got on stage and had a moving chat with her idol. 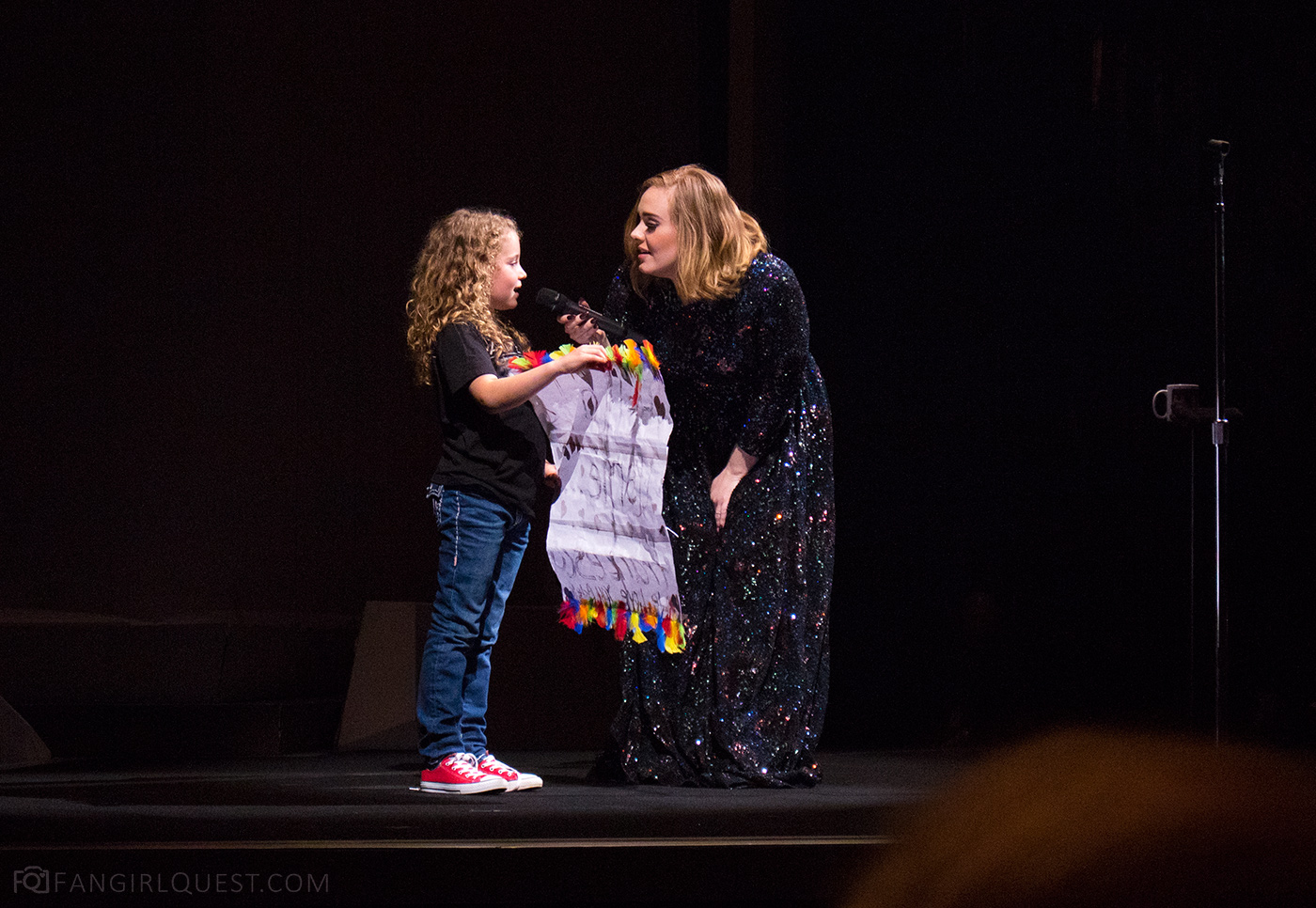 Another super cute fan on stage with a sign! Adele: “Can I have it?” Girl: “No.” 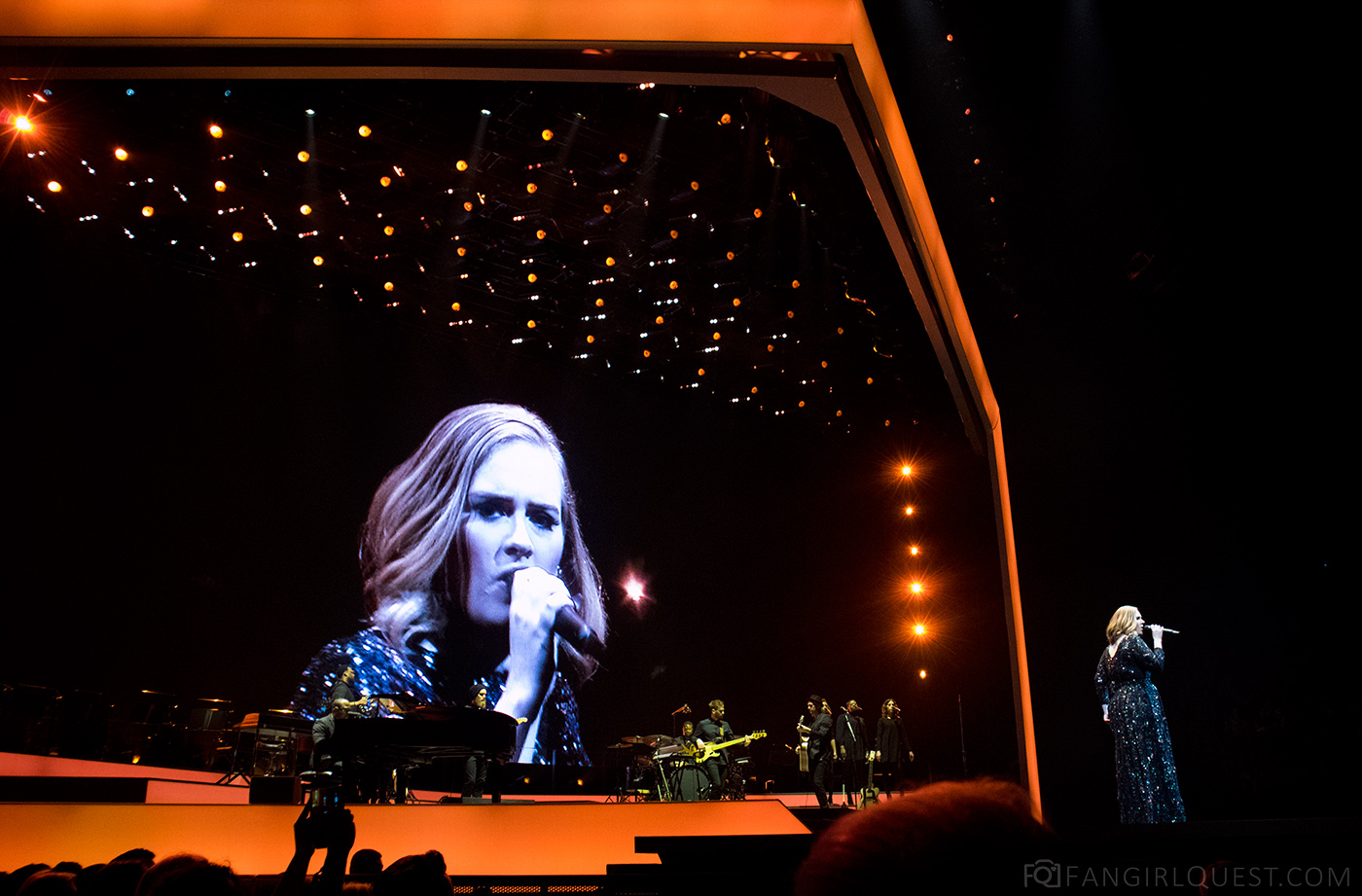 Adele’s comments and jokes between songs were brilliant and ranged from deep thoughts to telling us about the inconvenience of wearing a thong while on stage. 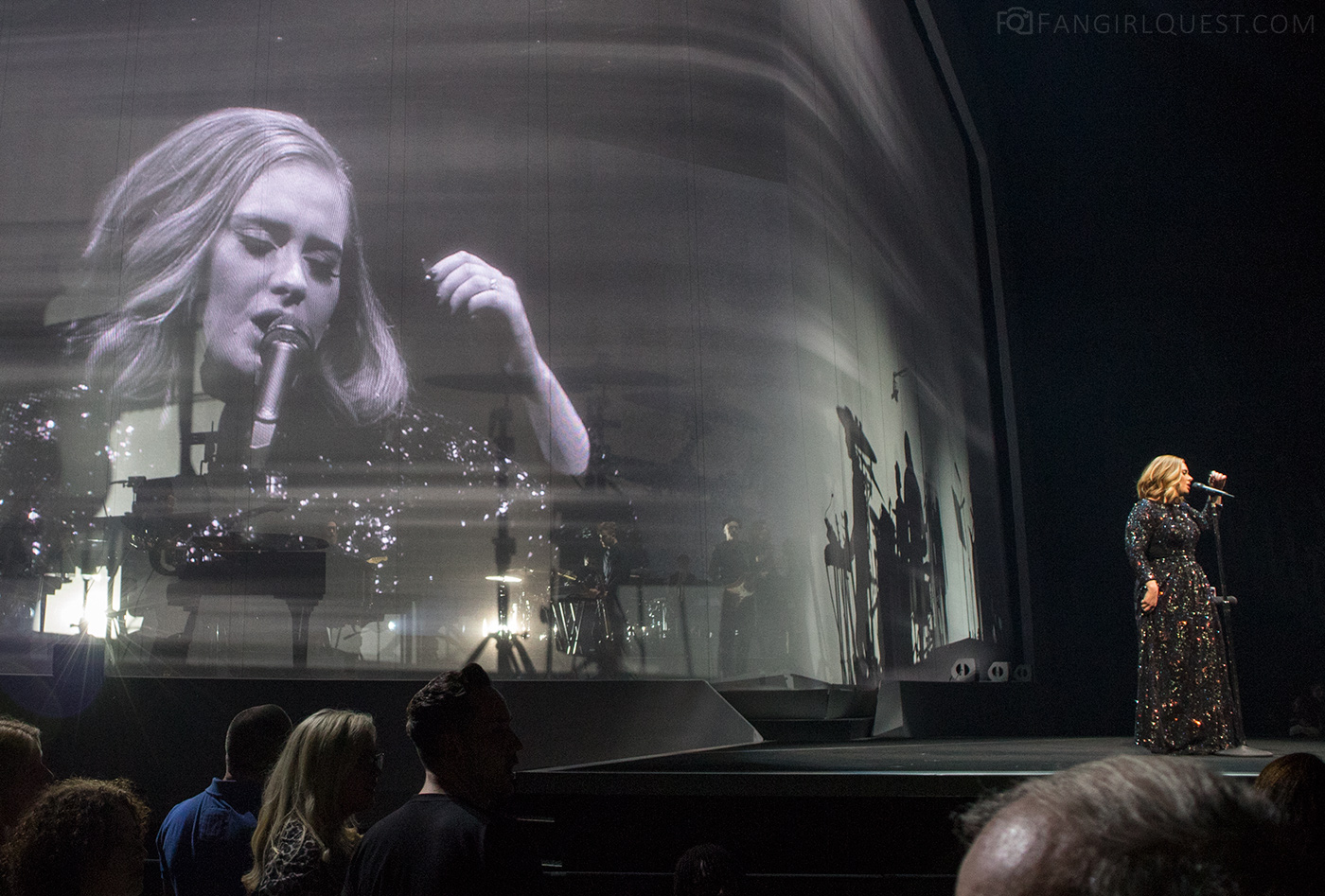 Adele’s stage was built of simple, but impressive elements. 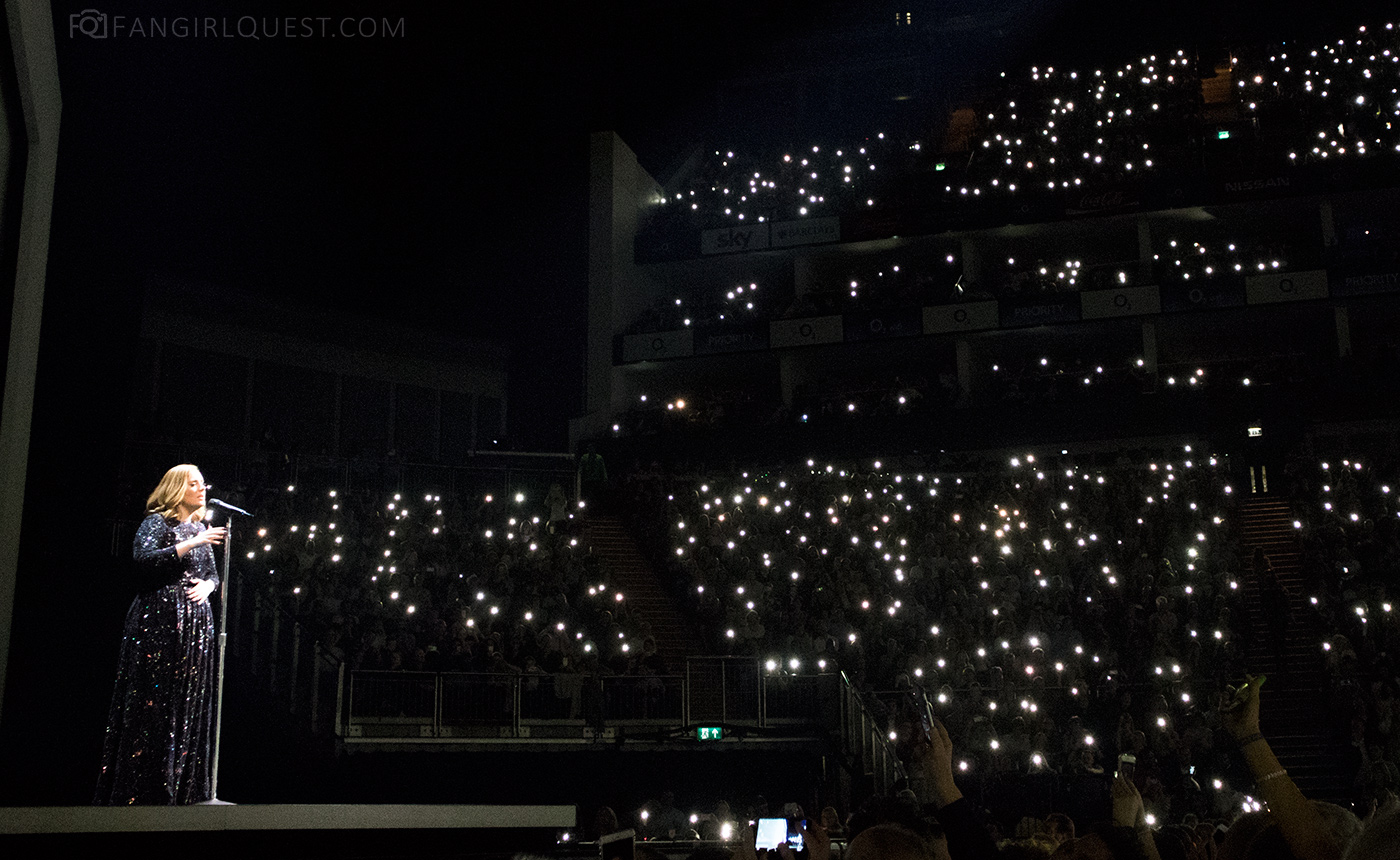 Adele: “Turn on the flashlights on your phones!” We all did. And it was incredible. 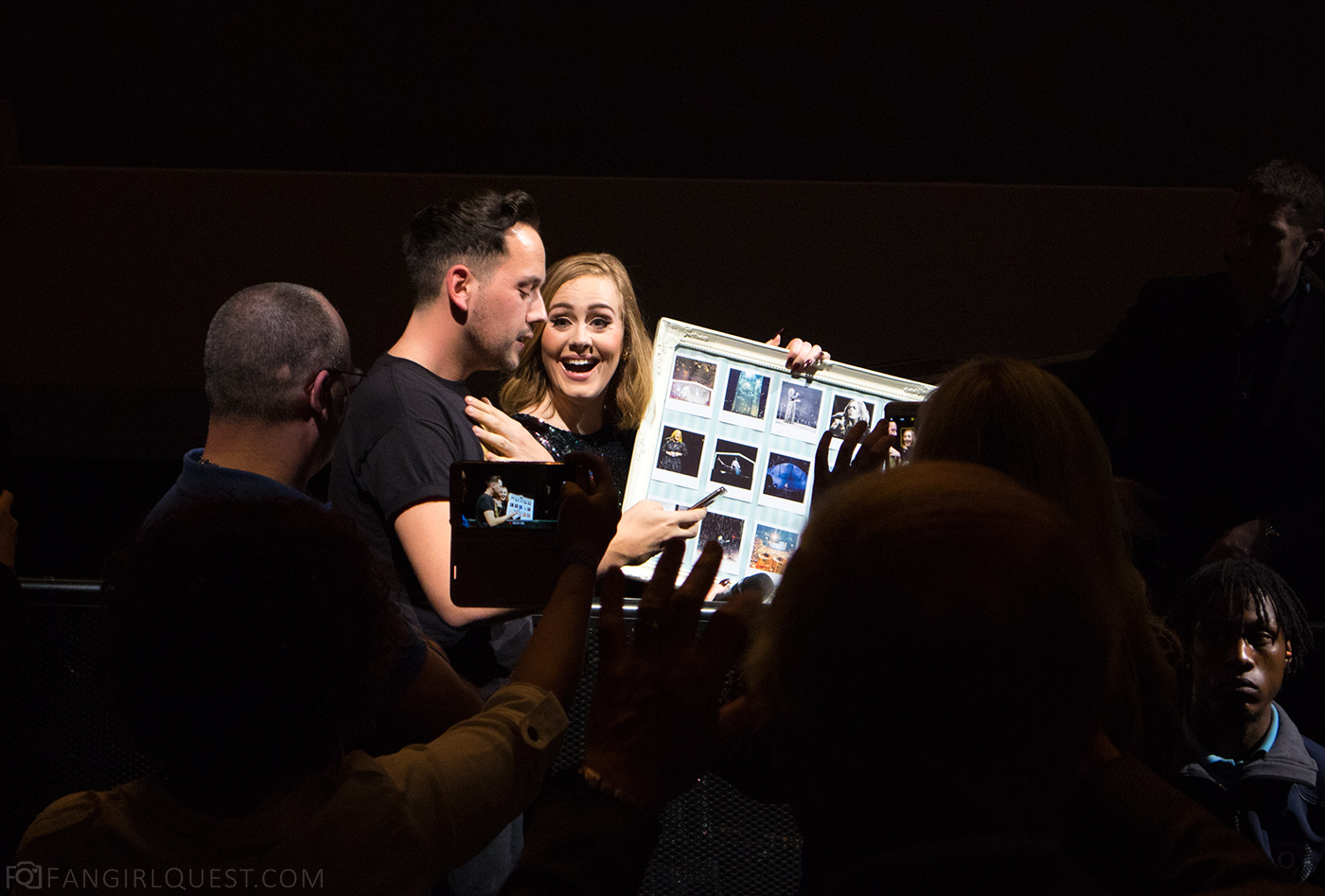 A guy in the front row with framed concert photos and an impressed Adele. 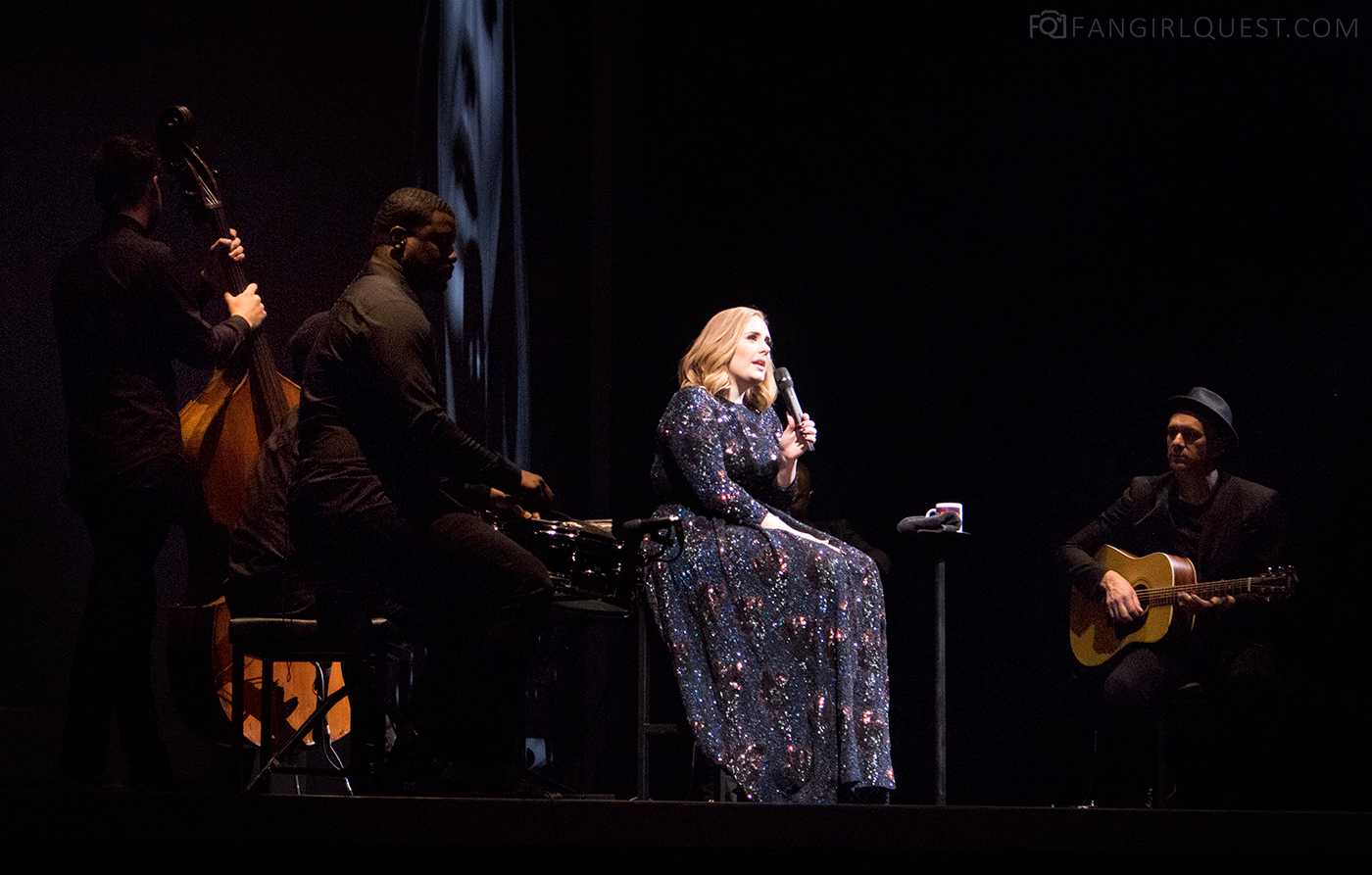 A few acoustic songs… so beautiful! 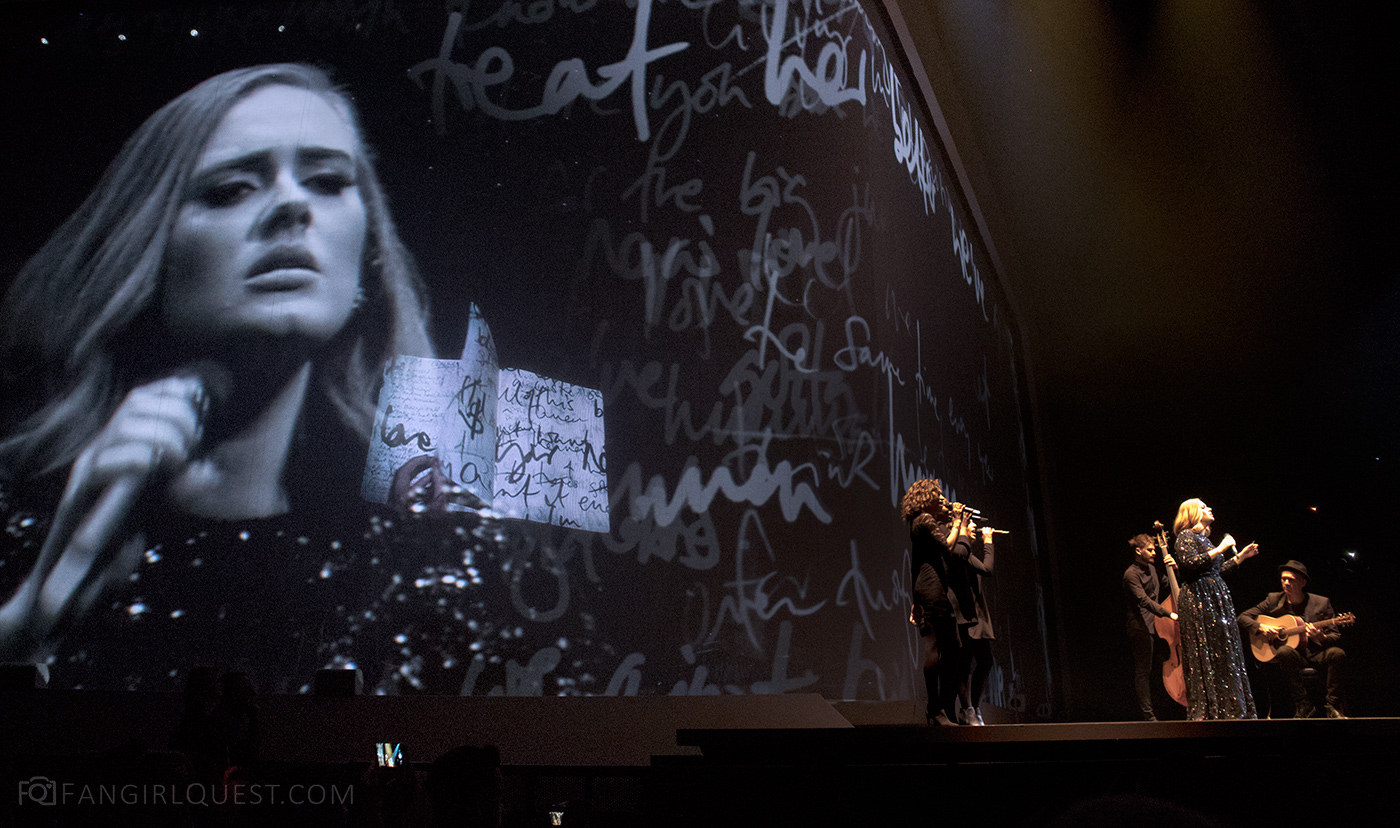 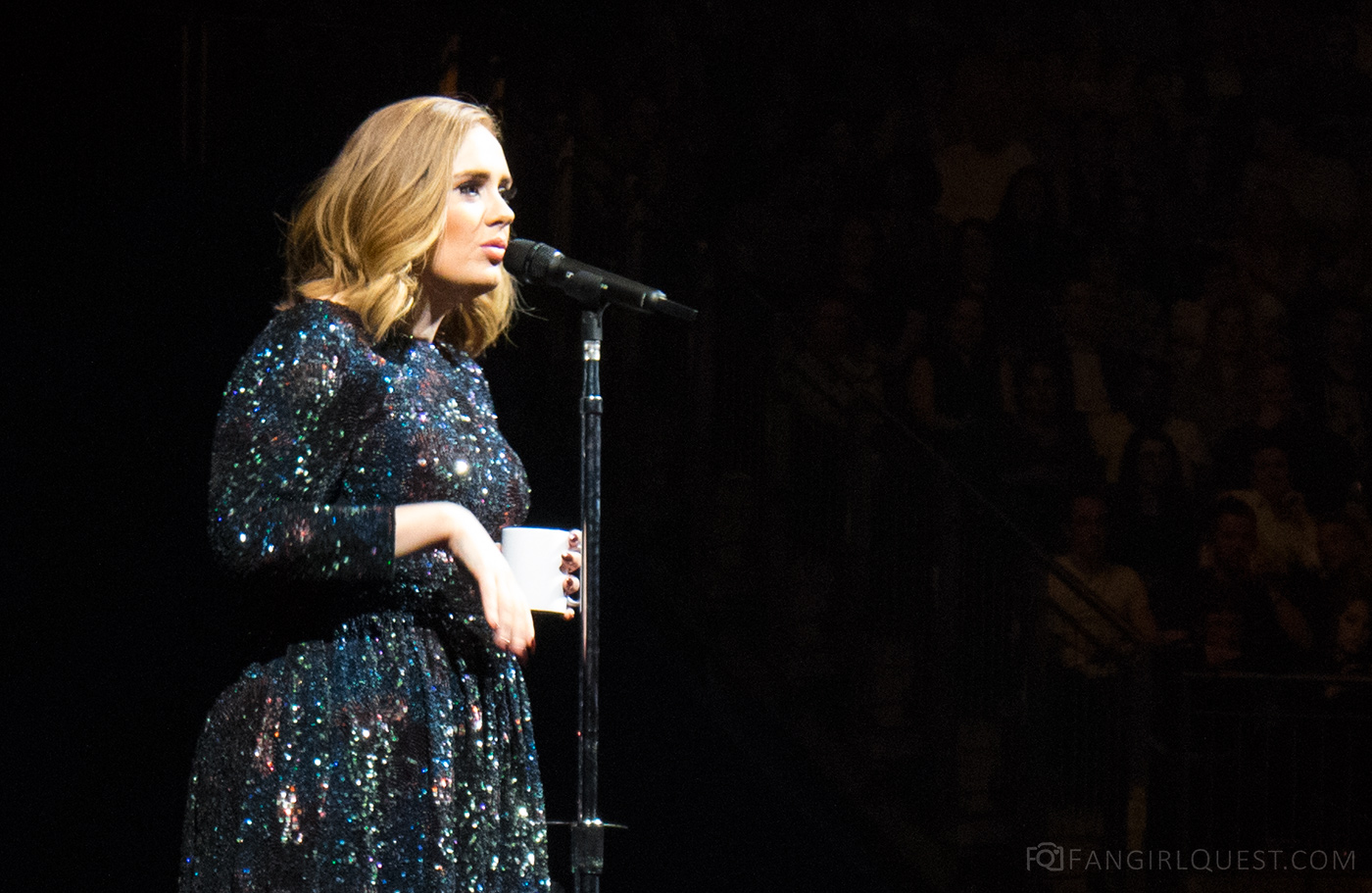 Adele: possibly the funniest woman in show business. If she did stand-up, we’d pay for it. 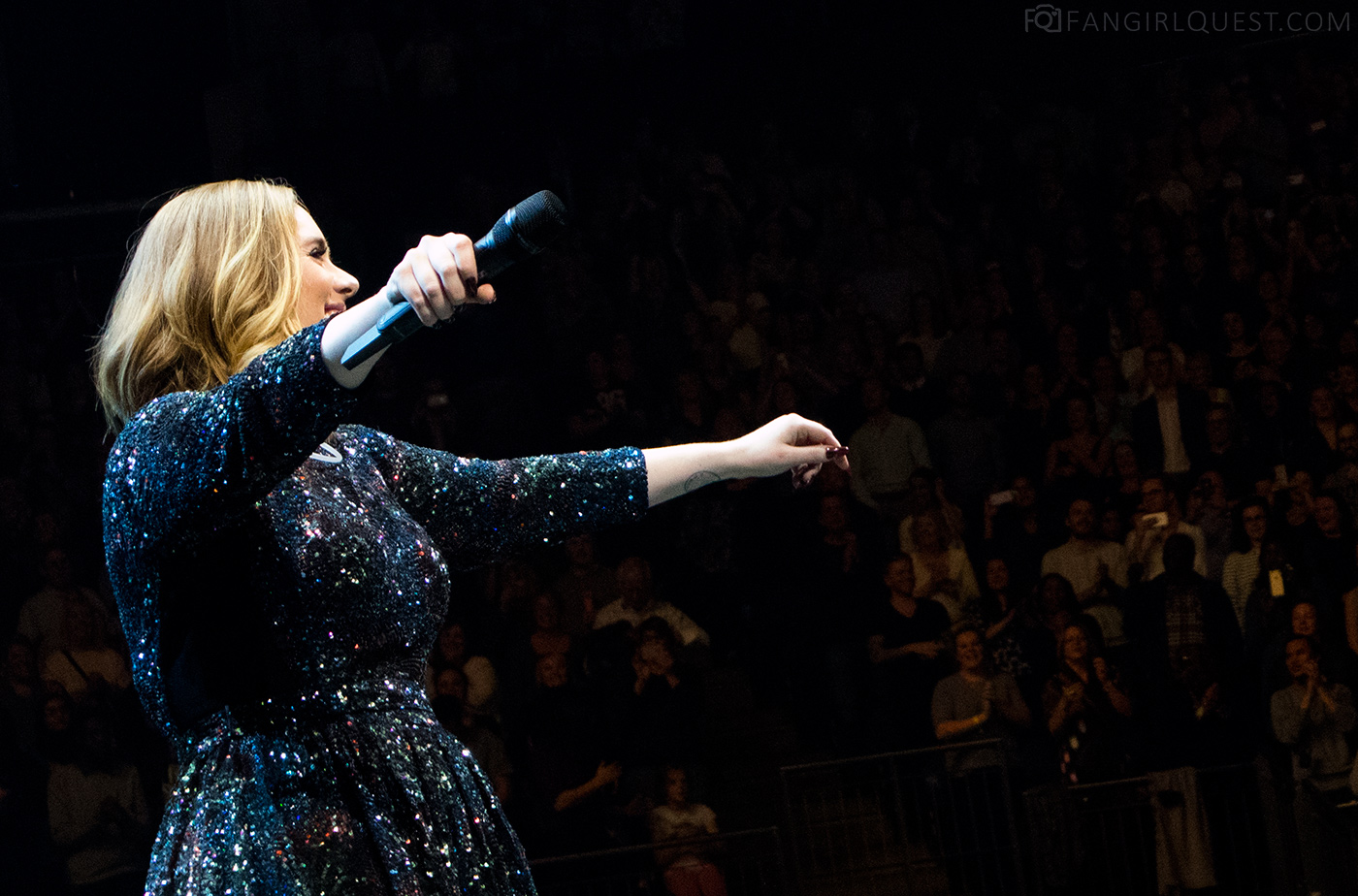 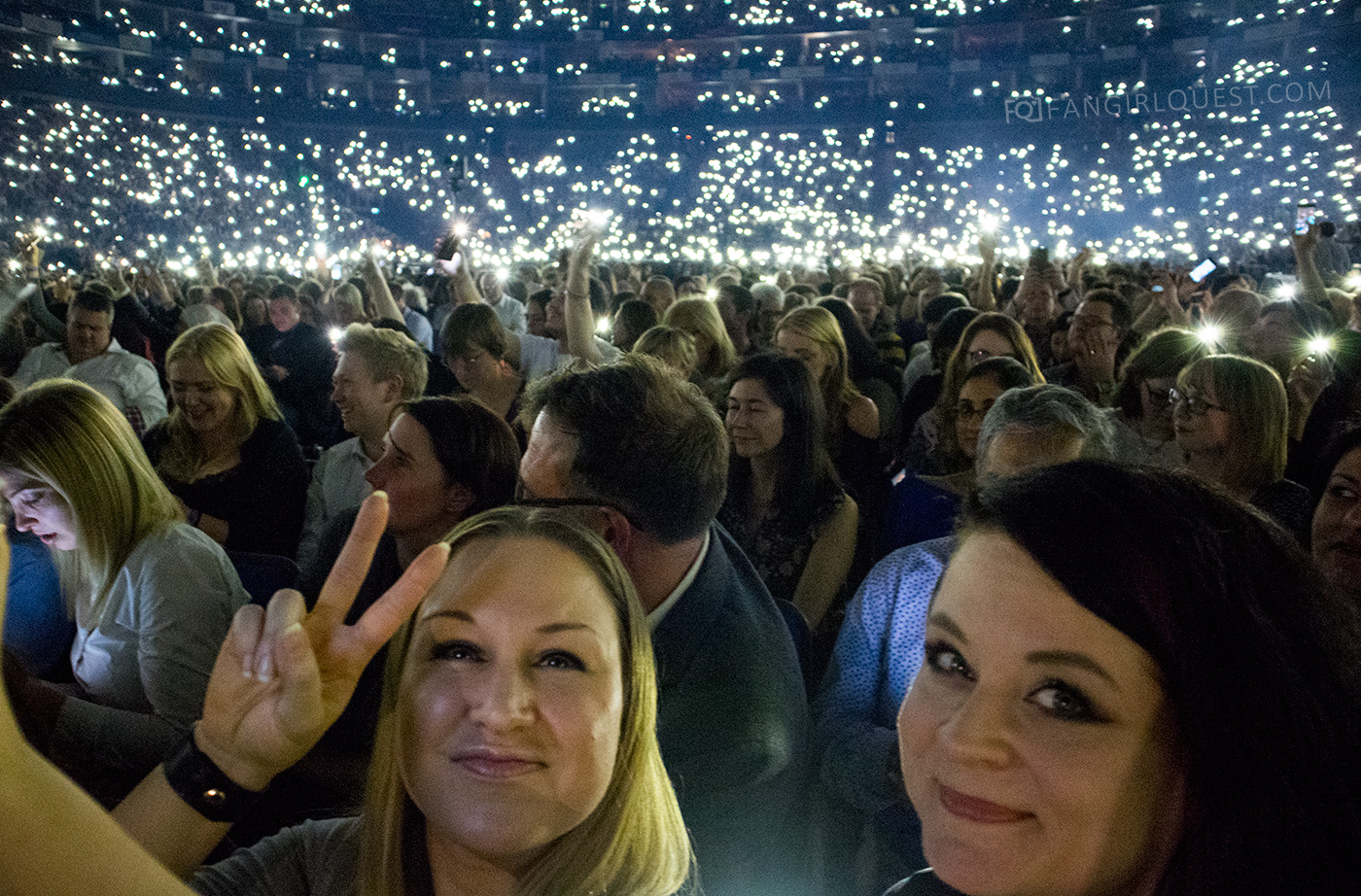 Happy fangirls in the audience! 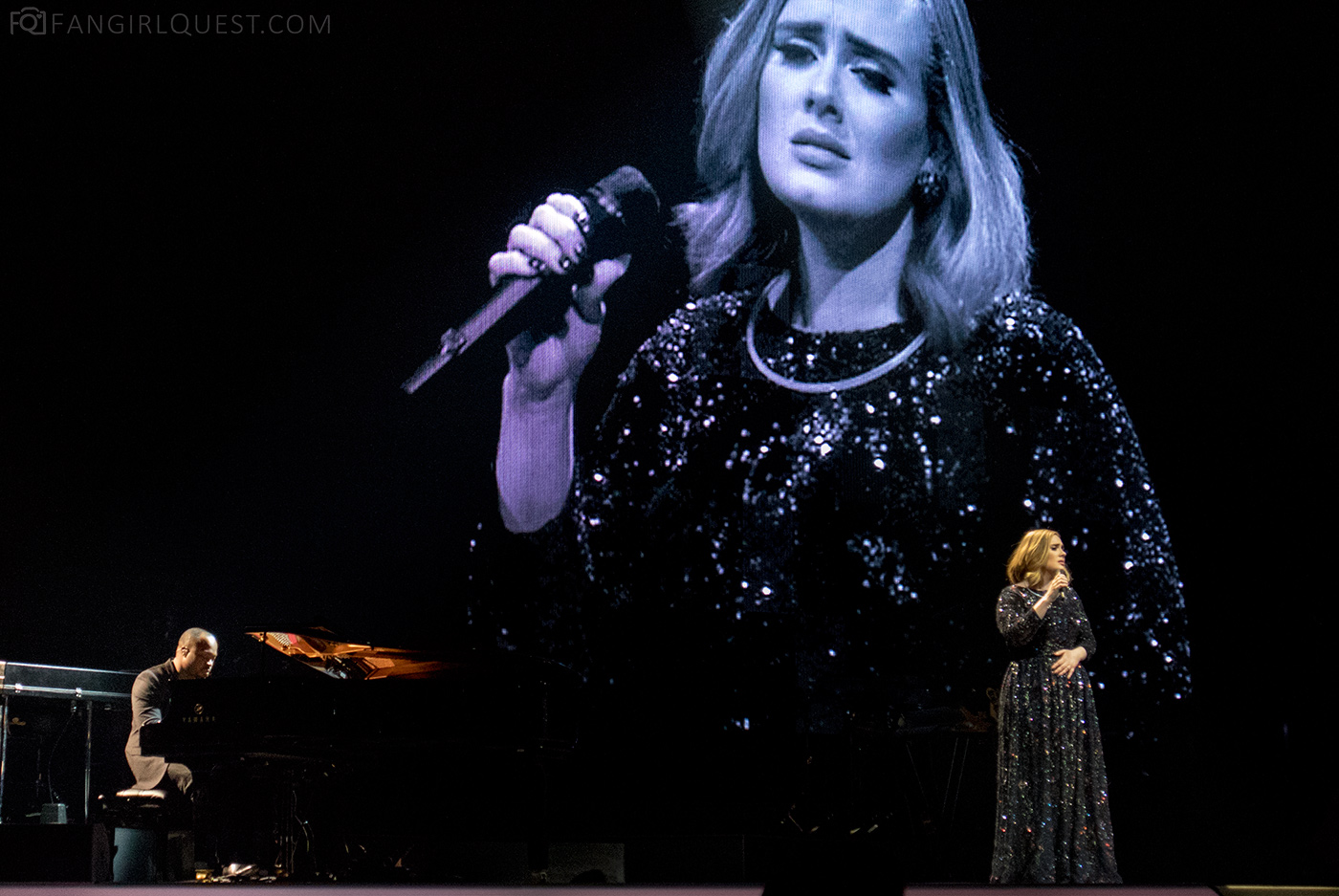 Adele opened up about being worried that nobody would be interested in her after such a long break, and teared up during her speech. Oh, sweetie… 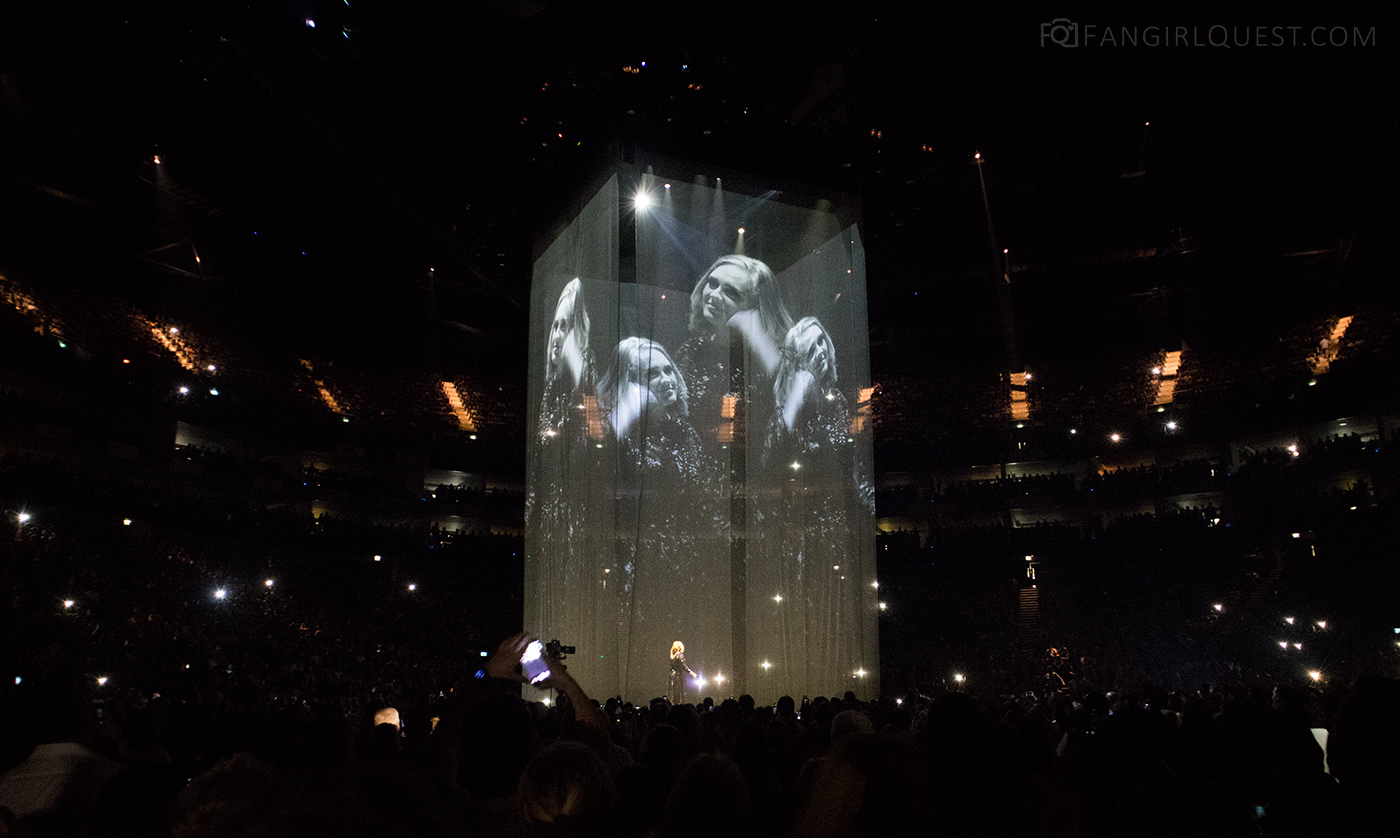 Even the mid-stage got the transparent curtain treatment. Brilliant. 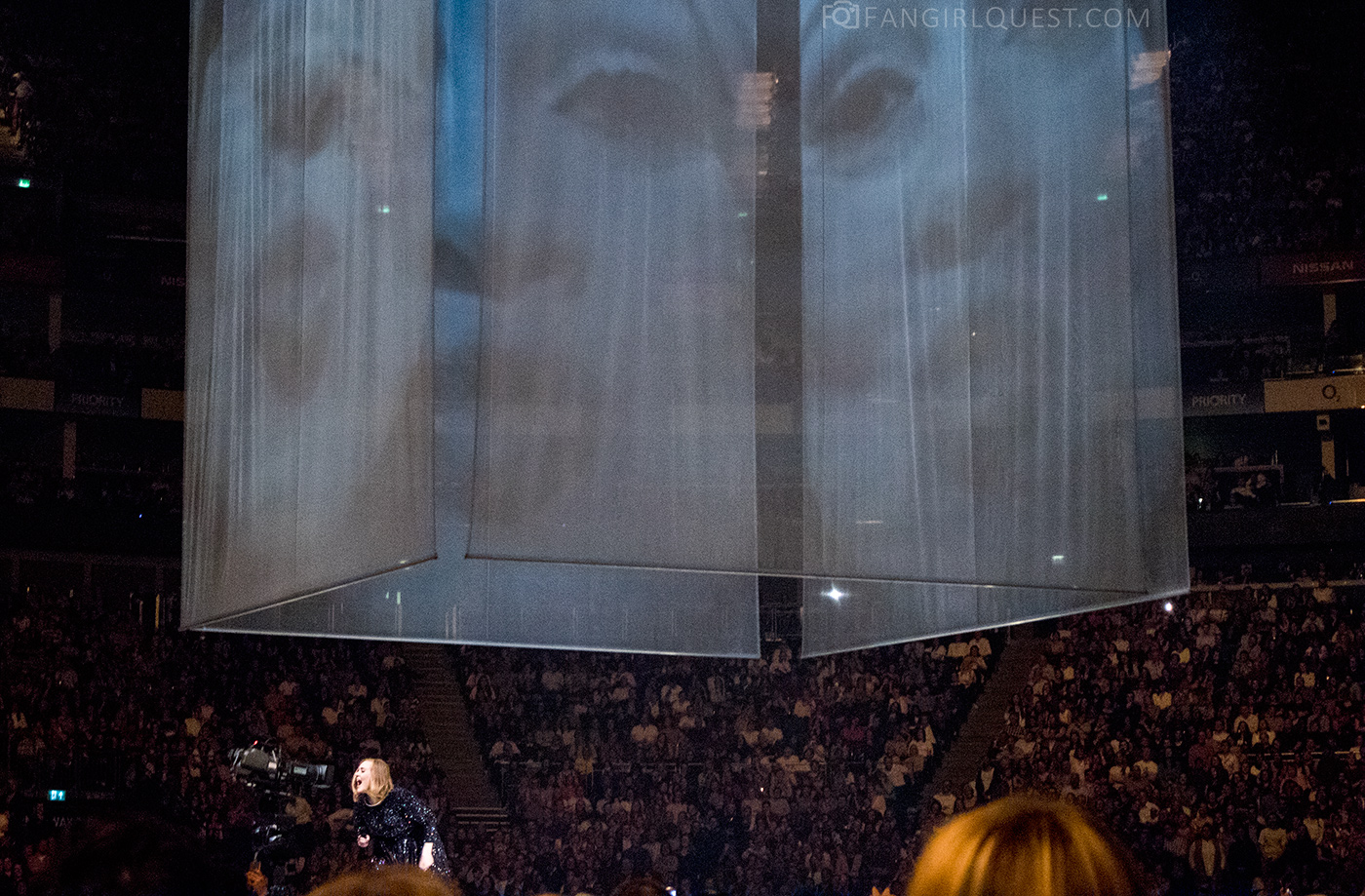 Cutie making faces at the camera and posing for selfies with front-row fans. 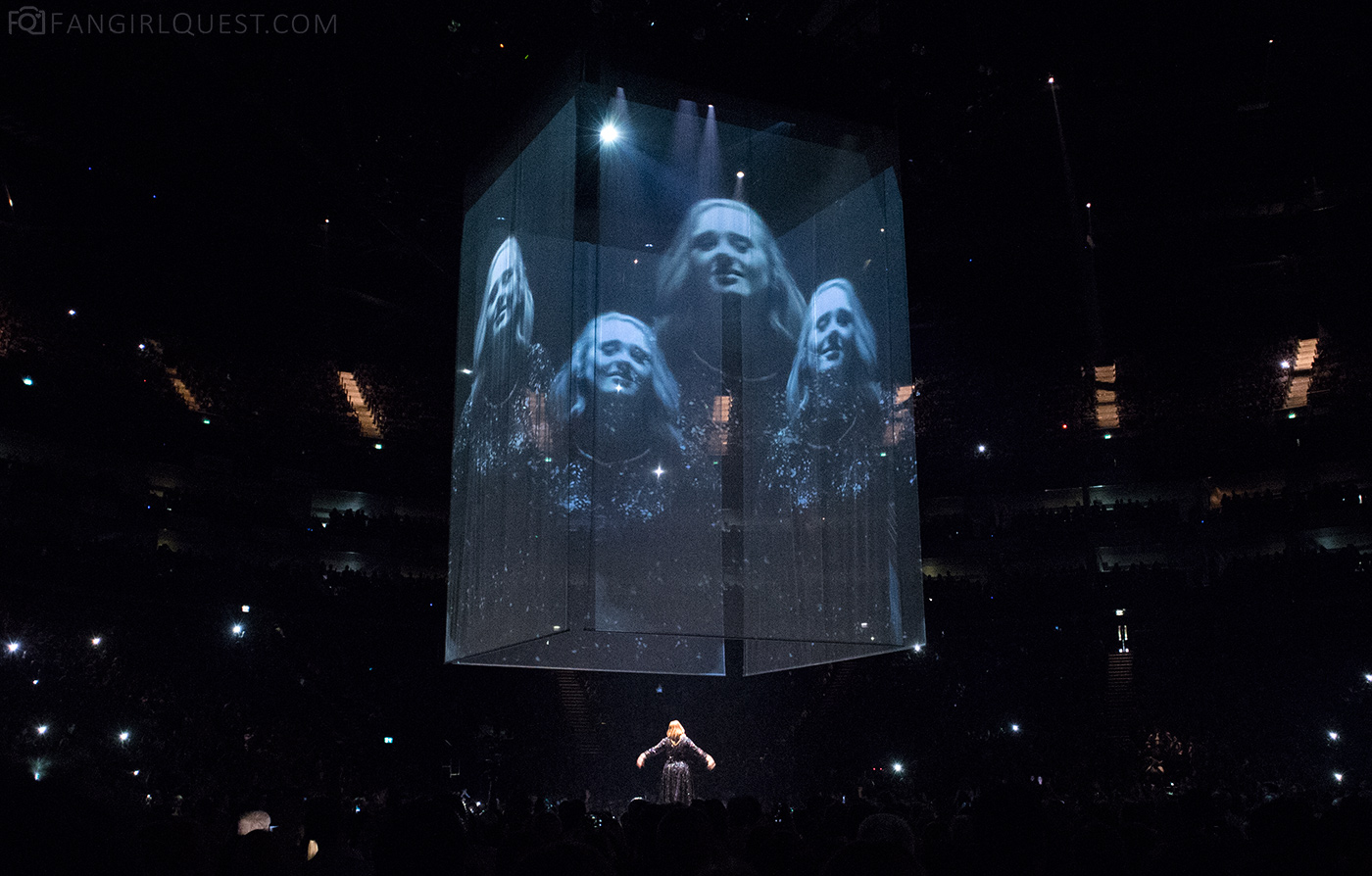 Set Fire To The Rain… and let it rain at O2. 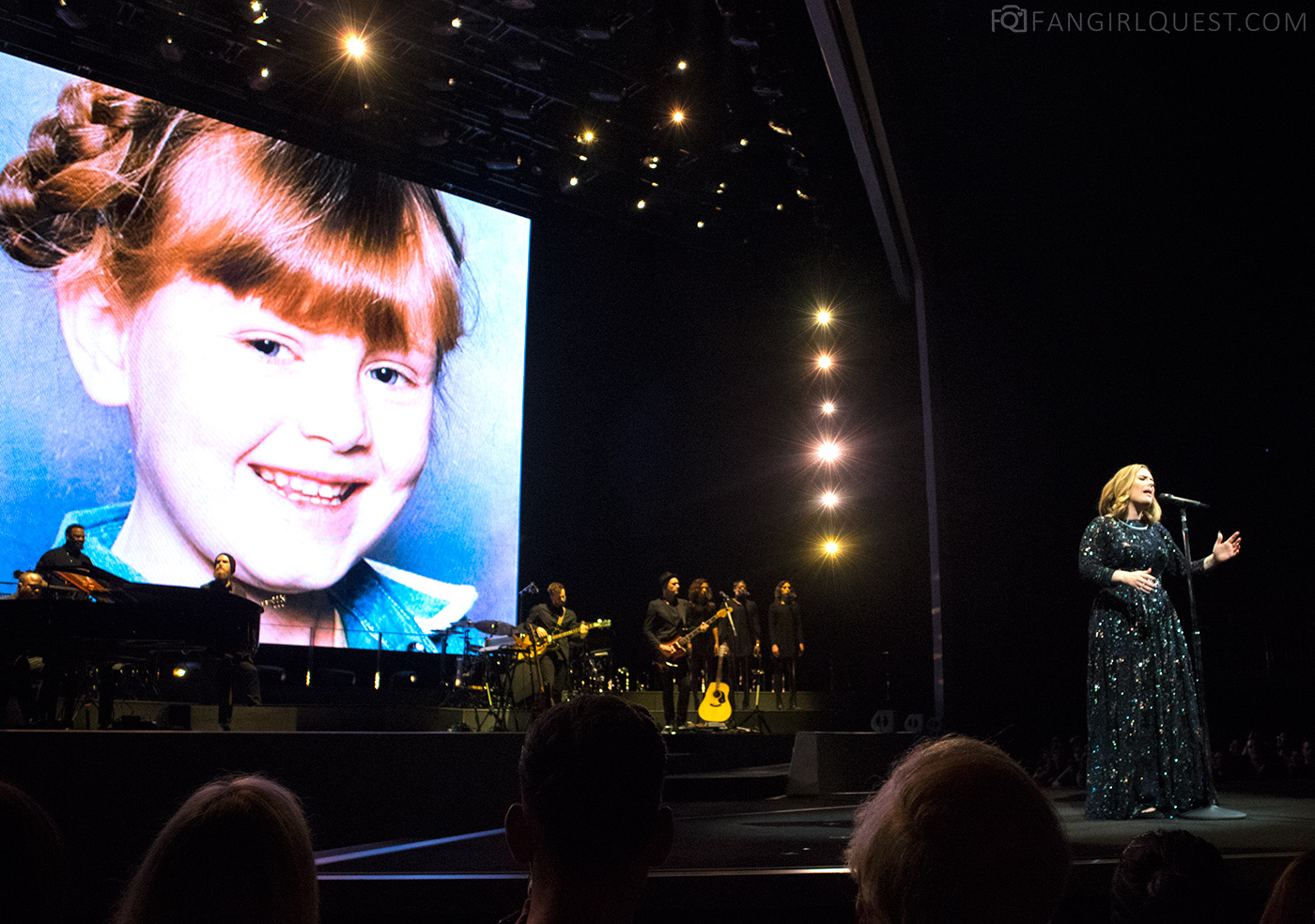 During Adele’s personal favourite, “When We Were Young”, pictures of her young were shown on screen. Eeek! 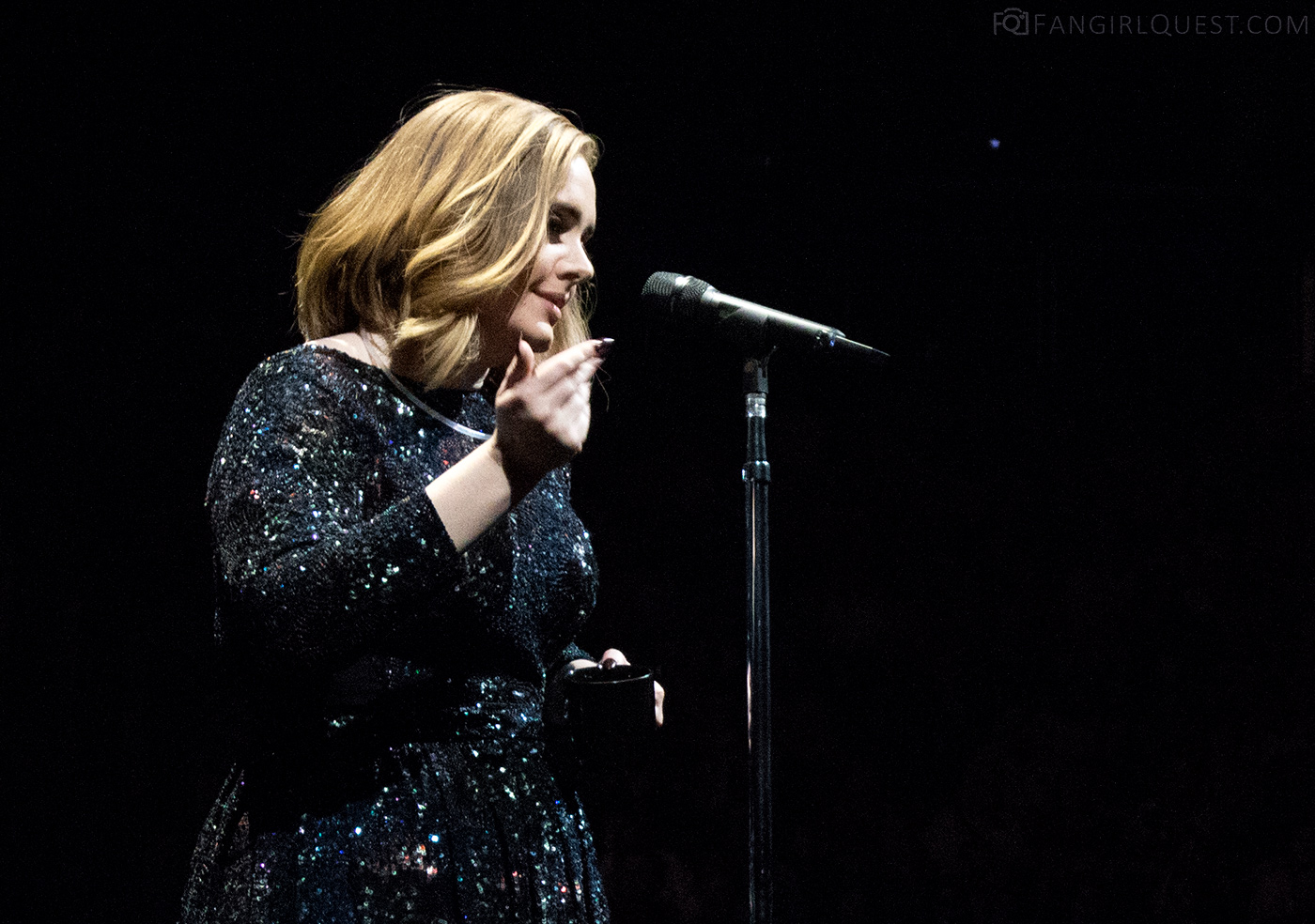 “Come closer, you guys.” We obeyed. 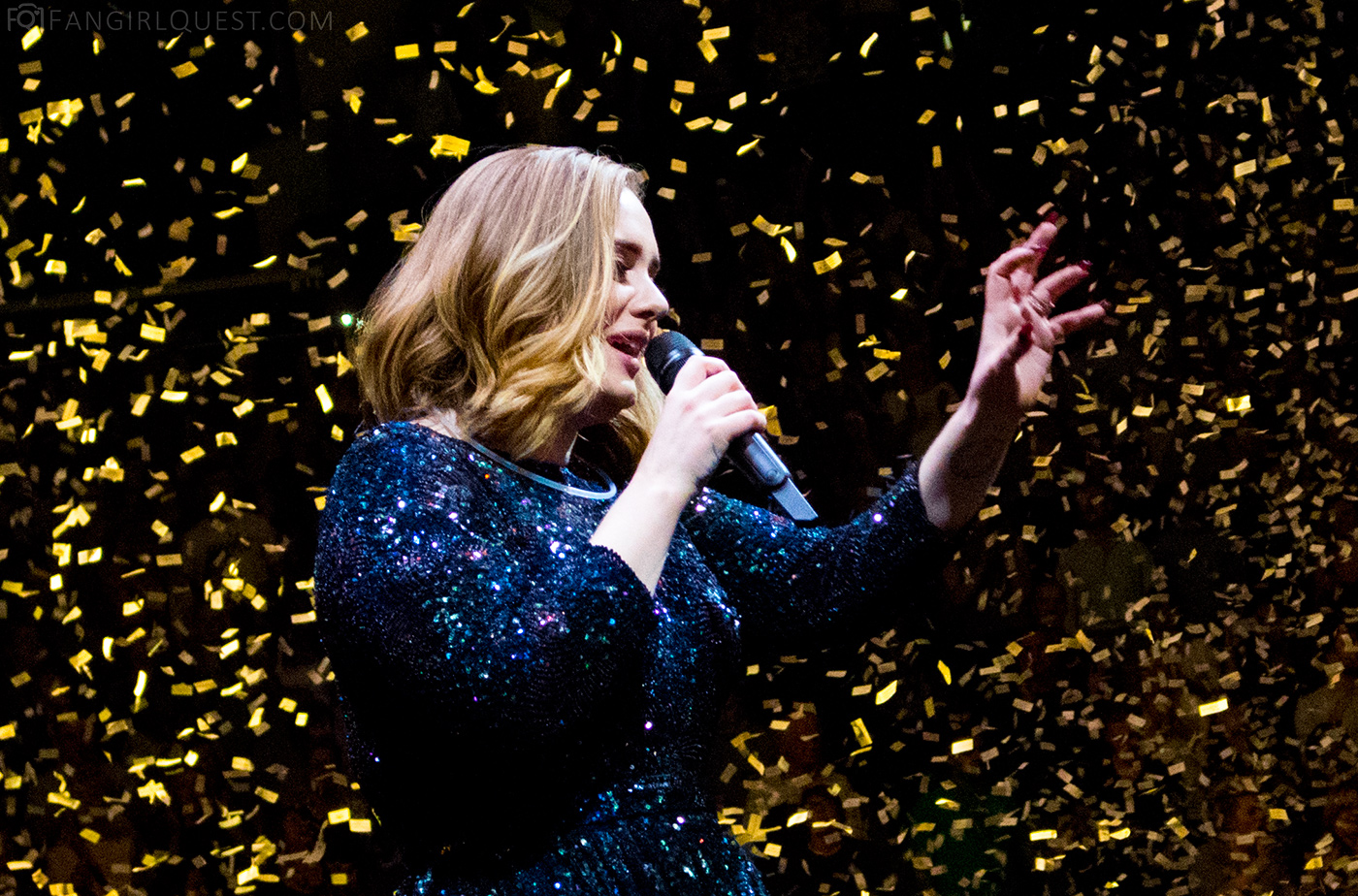 During Rolling in the Deep we got a confetti rain. I collected a bunch – each of them had little messages or bits of lyrics written in Adele’s handwriting. 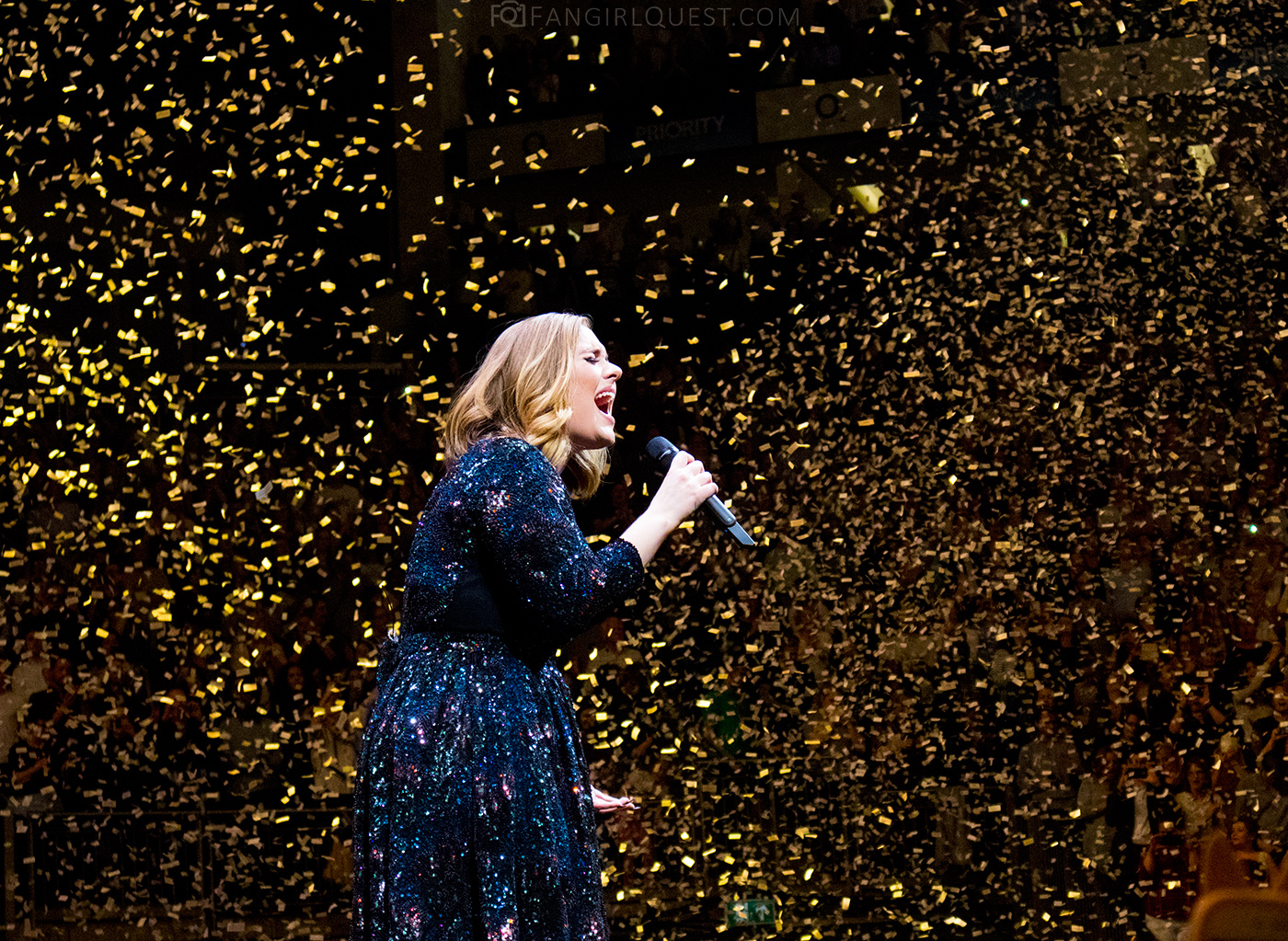 Pretty happy with Canon’s EOS M10, a tiny mirrorless camera that I was allowed to bring in like any other pocket cam. 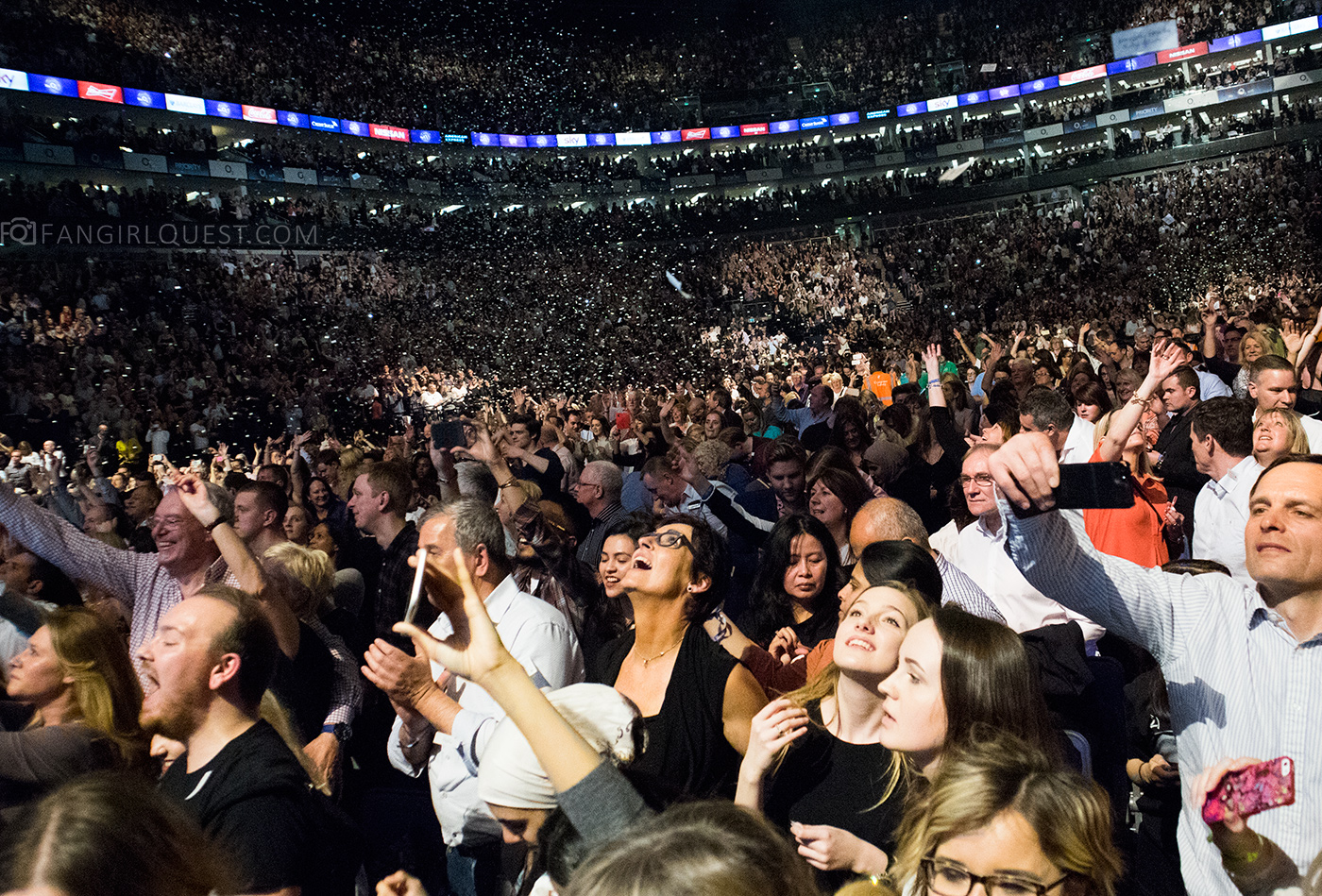 Look at all these happy faces! They tell the story of a great performance…