Walt Disney World: A Definitive Guide To The Happiest Place On Earth

Hello! It is me, Tiia, reporting from Pula, Croatia. I’m traveling with my dad & his wife this time, so this isn’t going to be one of those filming location trips that we’ve recently dedicated pretty much our whole lives to with my co-Fangirl Satu. Instead, it’ll be a rather normal tourist trip: the best of Pula sights, beaches and loads of relaxing.

And man, let me tell you… it feels super weird to have actual time off. Instead of getting up at 7am and heading to a dozen filming locations and driving around & working without stopping until it gets dark, we’ve just done some leisurely walks in the city and on the beach, followed by long siestas during the hottest hours of the day. 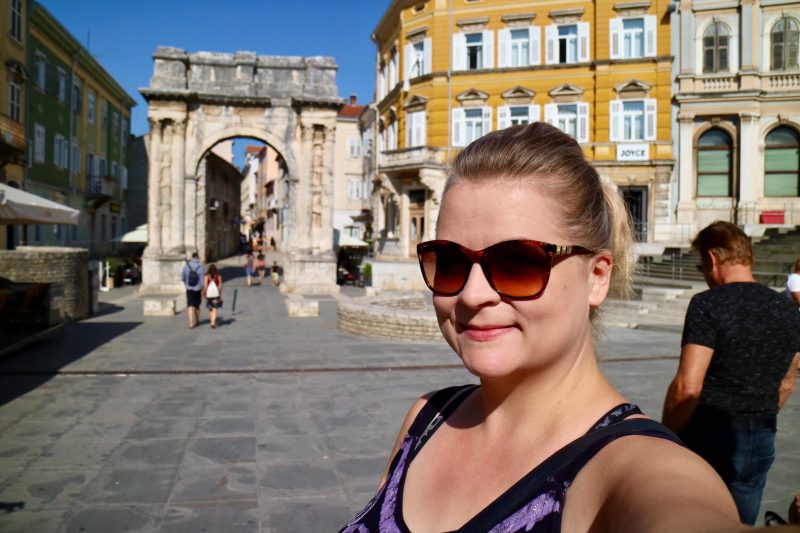 Anyway, I thought I’d share a few things we’ve seen so far here in lovely Pula. We’ve only been here for two days but managed to squeeze in many lovely sights.

The trip was somewhat an ex tempore one. We didn’t really have anywhere specific in mind, so we just checked Norwegian’s current offers and spotted their flights to Pula. Yay! Croatia! None of us had never been before and really wanted to go, since we’d heard good things from many of our friends who’d been here.

The flights were affordable and the flight time is only about three hours. So, it sounded like a good deal. We took it. 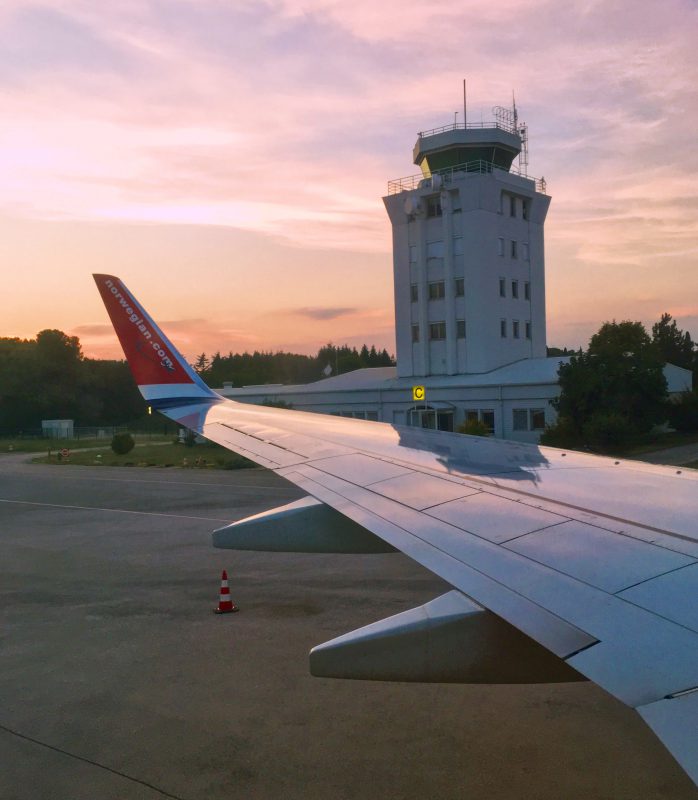 Since really early morning flights suck, I was also pretty happy about the late afternoon departure time from Helsinki. Plus, we got to land in time for a beautiful sunset, so that was an added bonus.

Yeah, the airport in the photo looks super small, and even though that isn’t the main building, the Pula airport is a small one, which translates to a quick and easy arrival. I think it took us maybe 15 minutes to get off the plane, grab our luggages and walk outside to the taxis.

Airbnb with a great view

Croatia basically charmed my pants off already during the first hour. Our taxi driver was hilarious, spoke really good English and had Frank Sinatra playing all the way to our Airbnb.

Next, we met our looooovely hosts, a nice, young couple who were full of smiles and good mood.

We’re staying in a basic two bedroom apartment on top of a hill, on the 11th floor… so the view is quite stunning. 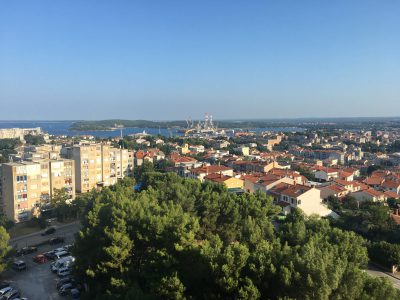 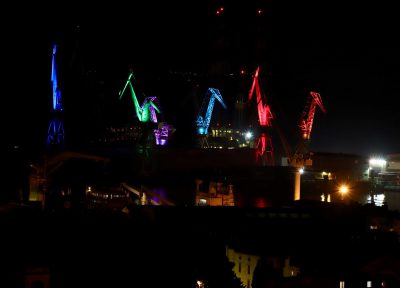 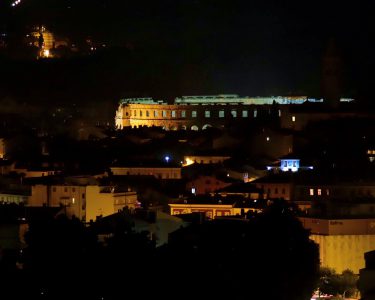 We aren’t very close to the city centre, but it only took us less than half our to get there by foot. I have to be honest: during the August heat it feels like forever. The weather’s been absolutely scorching hot and we’ve had to cross many streets, many times just to get on the shady side.

But, we made it and it was lovely.  The streets are pretty, the locals are friendly and communicating happens either in English or a lot of hand gestures and smiles.

Yeah… I know I should make a bigger effort in learning at least a few phrases in the local languages wherever I go, but I just absolutely suck at it. I can’t remember even the simplest of words. I try, but I can’t. So frustrating. 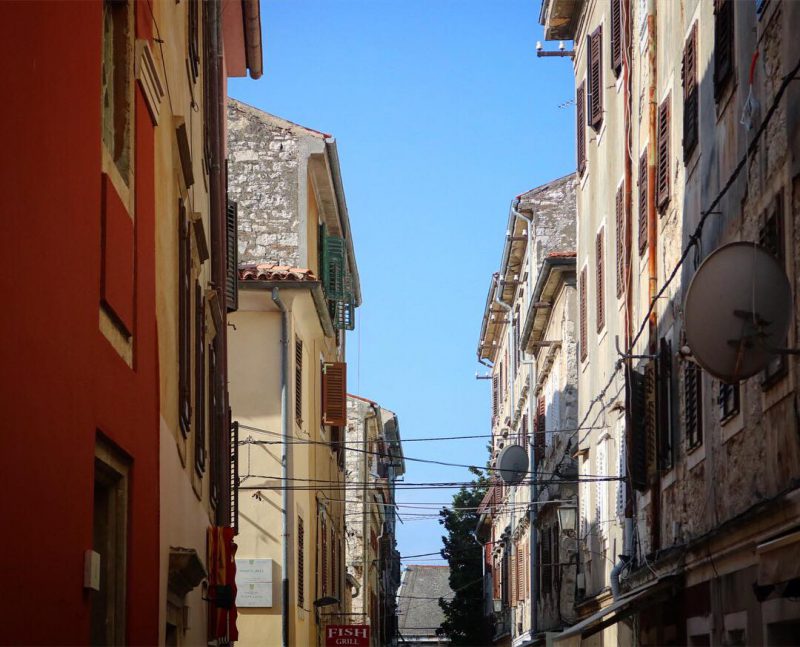 One of the biggest attractions in Pula is, of course, the Pula Arena.

The Pula Arena (Croatian: Pulska Arena) is the name of the amphitheatre located in Pula, Croatia. The Arena is the only remaining Roman amphitheatre to have four side towers and with all three Roman architectural orders entirely preserved. It was constructed in 27 BC – 68 AD and is among the six largest surviving Roman arenas in the World. A rare example among the 200 surviving Roman amphitheatres, it is also the best preserved ancient monument in Croatia. — Wikipedia

My dad isn’t the most patient traveler and gets bored easily, so we didn’t spend a lot of time. But it was still really impressive and we got some nice panoramic shots and selfies in the midst of these ancient walls.

I also overheard the funniest thing while at the Arena. We walked past these two guys taking a selfie, and I heard the other one ask: “Do you have a narcis-stick?” HA. I see what you did there, pun boy. 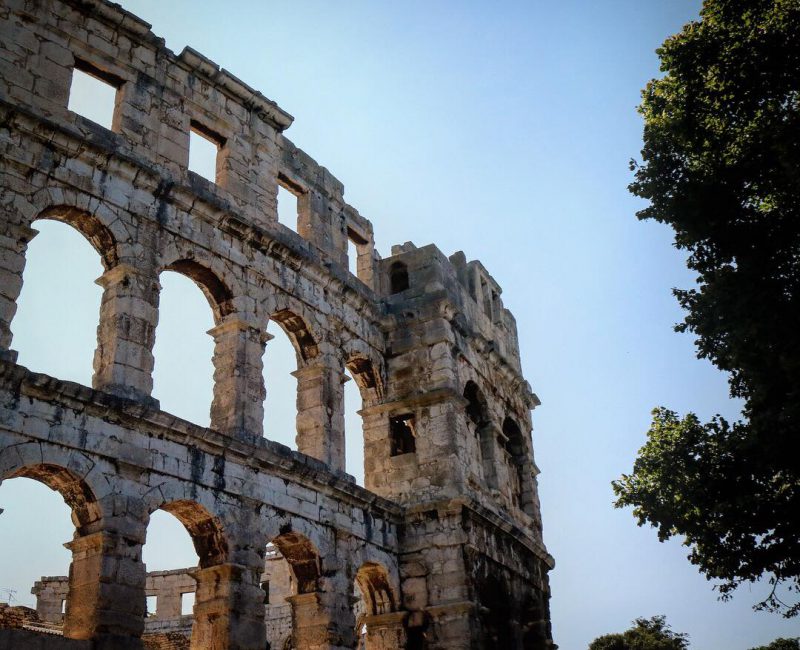 PULA CATS! I haven’t researched the street cat situation in Pula, but we’ve seen quite a few slender semi-feral cats around. They mostly give us the mean side-eye and keep their distance, but they look healthy enough so I’m not completely heartbroken. I’ll have to look up a couple of charities to donate a few euros to – I’m sure they have some here. 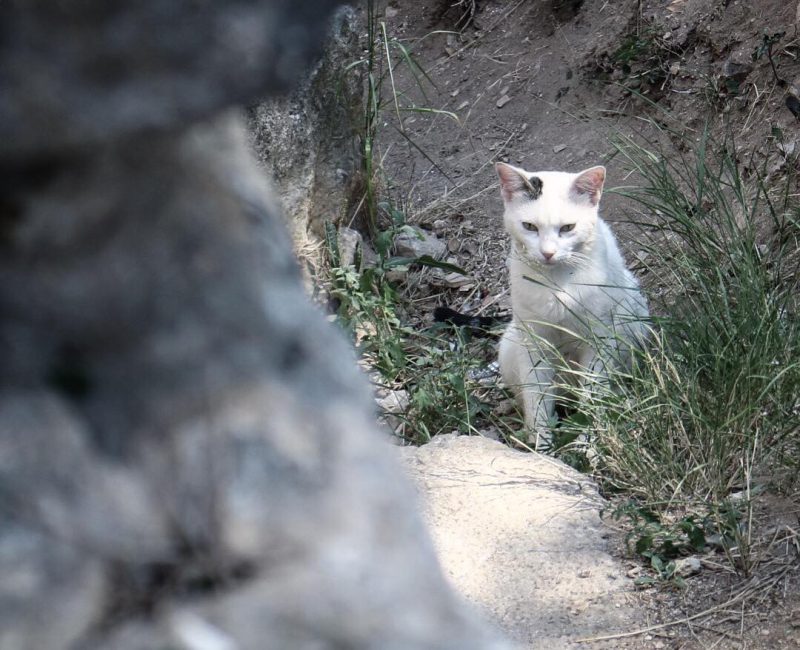 MARKO’S BOAT! I’ve been sending holiday photos to a dude named Marko from pretty much everywhere I go. He’s a dear friend (and also the singer of the World’s Greatest Band). This time, I got to send him this. Talk about personalized travel greetings! 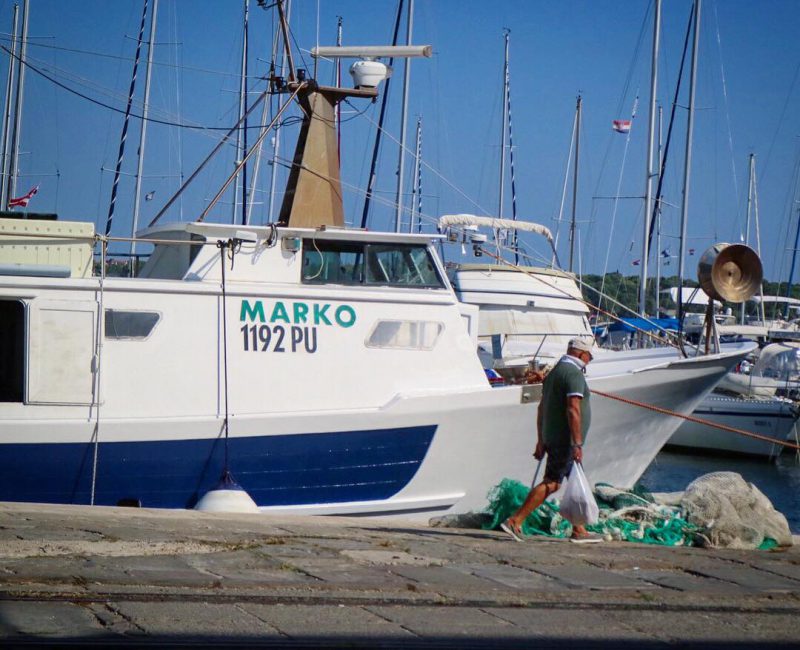 FOOD MARKET! There’s a lovely food market in the centre of Pula. We couldn’t quite endure the fishy smells inside the market hall, but they sold some incredible fresh fruit & vegetables at the outside market. I snapped a photo of these stunning chili… bouquets, I guess you could say? What a lovely idea. Would make the perfect gift to a chili loving friend.

(Me? I’m more of a mild flavor gal, so couldn’t even think about eating any of these. Still, they please the eye.) 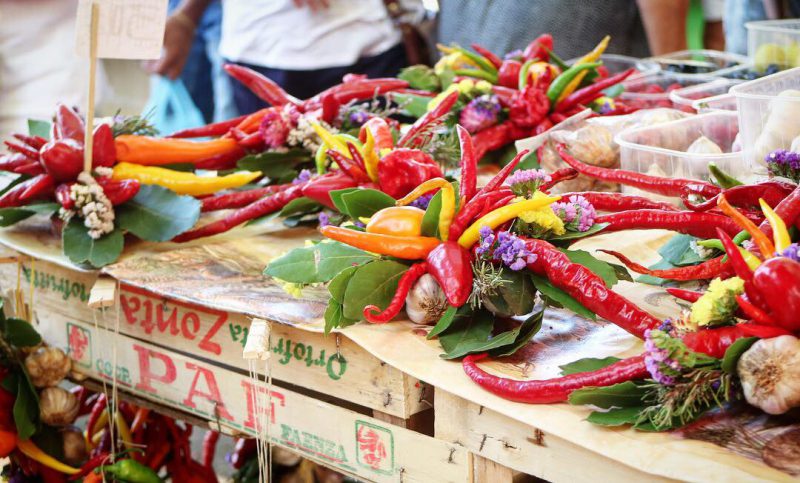 THE HEAT, OH MY HEAVENS, THE HEAT. Ok, turns out that Pula is super, super, extremely, very effing warm in August. We’ve been sweating our butts off and today, I almost had a heat stroke. Or at least that’s how it felt like.

So, during our siestas at the house between our daytime walks and evening activities, I’ve been hanging in the apartment wearing a cold, wet towel. Apologies to our Airbnb host – I’ll make sure I’ll wash & dry it nice and clean before I go. 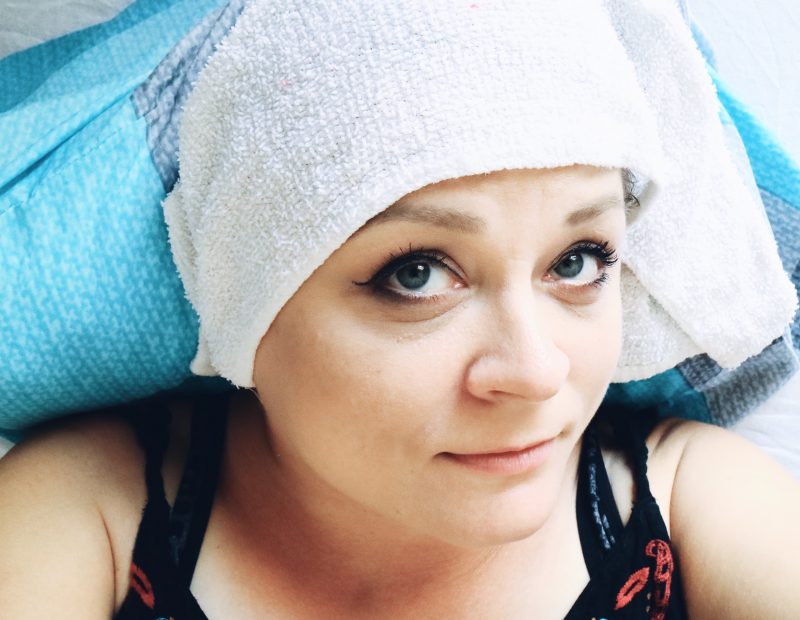 The secret beaches of Pula, Croatia

Right, the beaches. It’s only been two days but we’ve already checked out a couple of cool ones. The first one we visited was the beach adjacent to Youth Hostel Pula. It was a decent size, nice beach. It was kind of crowded on a hot Saturday evening when we got there, but it was worth the trip, since dipping into the ocean made breathing a little easier for like 5 minutes. At least.

HOWEVER. The water was filled with tiny jellyfish and I was like EEEEEEEEEEEEEK THEY’RE TOUCHING MEEEEEEE the whole time I was in the water. Which was like, 3 minutes in total. I wasn’t worried about them stinging or being poisonous since it seemed people were ok with their children playing in the water, but dear gawd. The feeling of these rubbery, slimy things hitting my arms and legs every time I took a lazy stroke was just a little too much for me.

(But then, I do have quite a phobia of underwater things touching me, be it fauna or flora. 99,9% of the beach folk seemed to be just fine with them.) 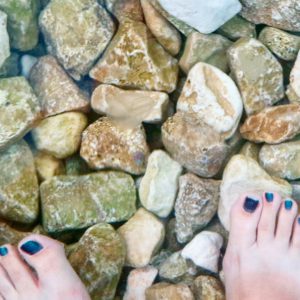 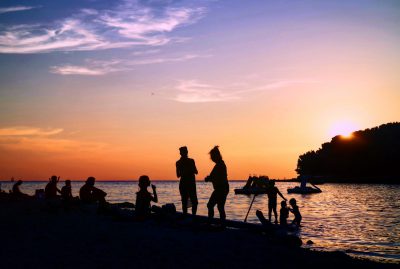 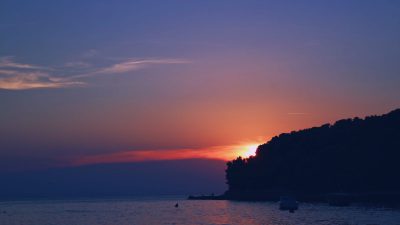 You can kind of see the little jellyfish next to my feet in the toe photo, if you look closely. They were tiny, yes, but they were everywhere. I later googled them and I’m pretty convinced they’re called comb jellyfish, and that they’re a recent addition to these parts of the sea. I might be wrong, so I’ll not link to any of my Highly Scientific Research for now…

VERUDELA. I’m not quite sure what the locals call the area of the Pula Aquarium and the surrounding beaches, but I kept seeing the name Verudela appear in many things… so let’s go with that. This place turned out to be an endless row of beaches, paths and secret swimming spots.

We walked around for about an hour and spotted many good places for a picnic, but didn’t really have anything with us so we just decided to come back another day. But yeah – if you’re looking for a great day in the sun, I’d highly recommend checking this place out. 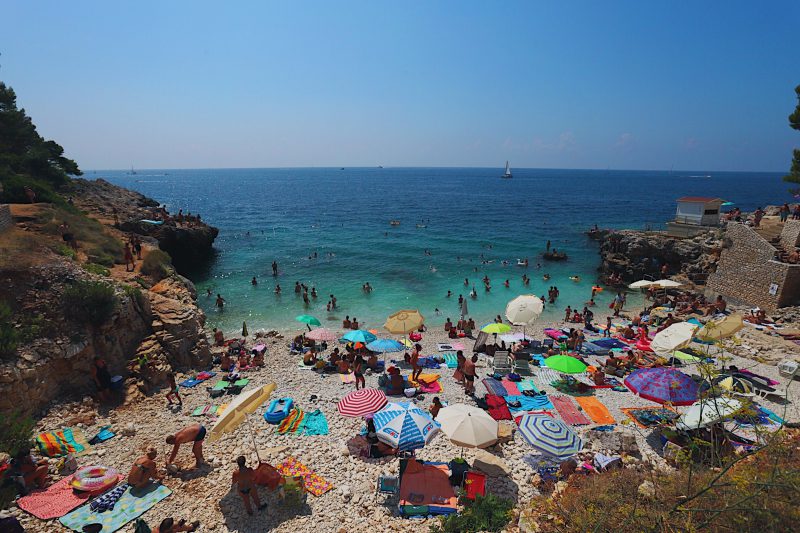 VERUDELA CANYON. On Google Maps I spotted something called Verudela Canyon and practically forced my travel companions to take the hike there. It wasn’t a long hike, but again – IT’S SO DAMN HOT OVER HERE – we had to take it slow. In the end, the canyon was quite a good find. You can even climb down there to see a little cave and all, but I wouldn’t recommend that to anyone with wobbly feet. I’m usually quite good with steep climbs and tight spots, but I was a little nervous down there. 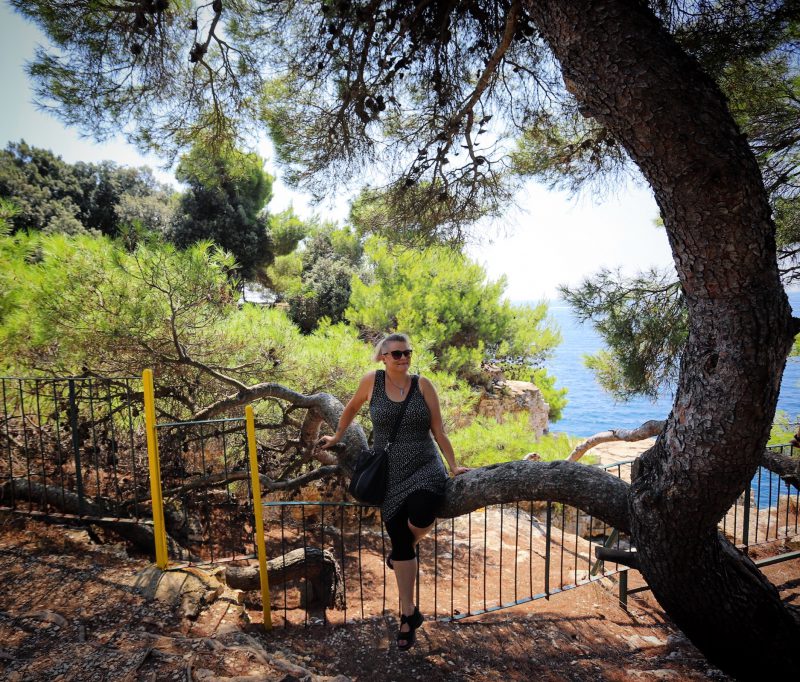 (That’s a cool shot of me posing in front of the canyon, although you can’t really see the canyon in the photo…) 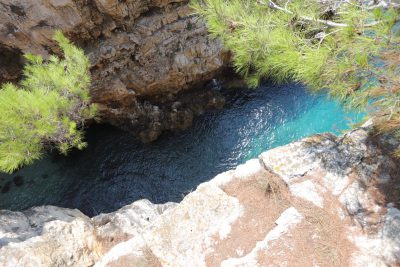 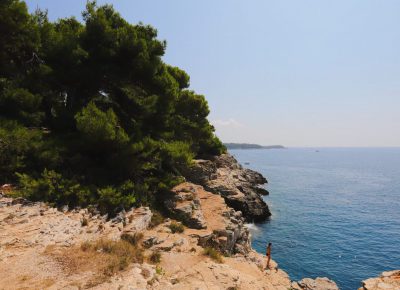 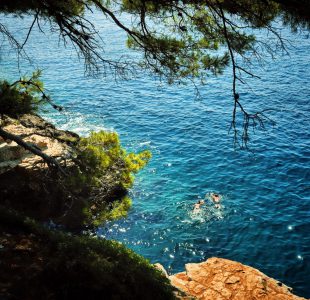 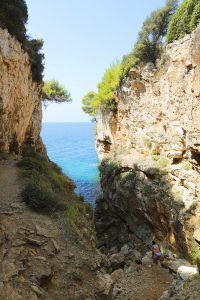 Alright, it’s finally getting cooler here in Pula and I’ve been sitting on the balcony watching the promised thunderstorm approach. I’ll end this report with a photo of an activity I’d very much like to try some day: parasailing.

Look at them go. Like an albatross, wild and free, above the clear blue waters. I need that in my life. 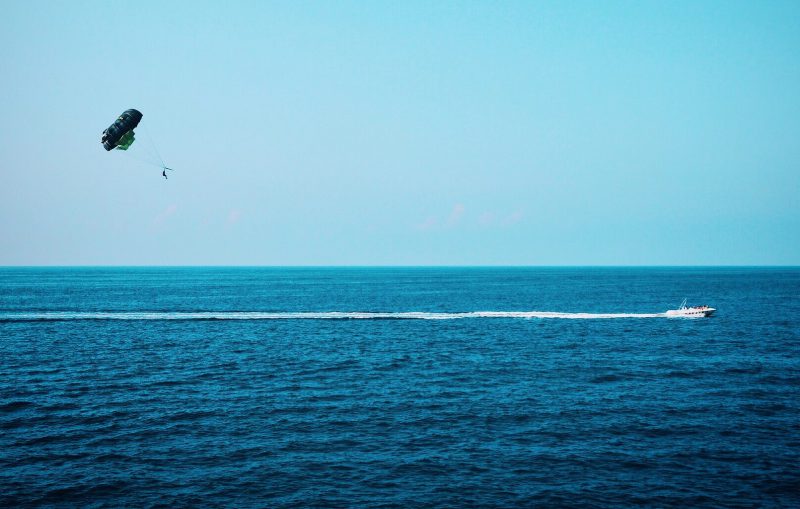