During our massive roadtrip 2014 from Vancouver down to San Diego, then across the southern states of the USA and up north again to NYC we visited dozens and dozens of filming locations. Most of them were easily accessible city locations, street corners and such, but some… well, they were challenging. One of the most tricky ones was the Breaking Bad desert in New Mexico.

During our Breaking Bad tour in Albuquerque we stopped at Gus Fring’s chicken restaurant, stood up on the roof where Walter White and Jesse Pinkman shook hands and visited the White house in the suburbs. At the house we had a super brief chat with the friendly owners (“feel free to take photos but please stay on the street!”) and met a few other fans of the show too. 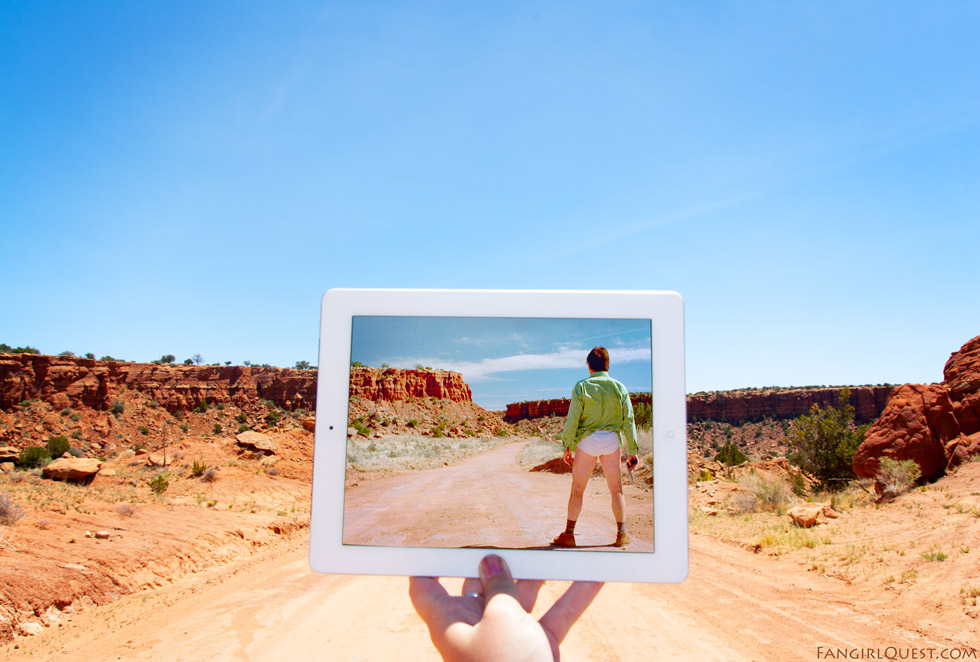 But the Breaking Bad desert AKA the Tohajiilee Indian Reservation outside of the city was one of the most extreme filming location trips we’ve ever done. Not only was it quite tricky to find (although thanks to a website we’ve sadly now lost told us the exact coordinates that absolutely saved us), but the weather was not gentle that day either. It was lose-your-headwear windy that day, but on top of that, also scorching hot.

Since several Breaking Bad locations were actually in quite a small area in the desert, we tried to just move our car around to each of the spots where we needed to take photos. That turned out to be too complicated and the car heated up the second you turned the engine up anyway. Next we tried to cover ourselves (and our equipment) with an umbrella but the wind almost ripped it apart. In the end, we just had to try and survive without any protection from the heat.

With great determination we finally got the photos done. Plus, in the process, we also found the little hole the filming crew had dug to film the Winnebago crash!

Yeah… We were literally excited about a dirt hole in the desert. And that’s what film tourism is all about.